Well, I returned from the Krasnodar Territory, wheretraveled by car with a bicycle on the roof. I was given a test of the new Thule Proride 598 bicycle carrier, which is installed on the roof of the car. In total, I drove about 3,500 km from Moscow to Sochi and back. I drove along roads with different surfaces, including rather uneven primers in the fields. In total, the mount has stood for me for a total of 3 months, since the trip was delayed for a long time. I think this experience is enough to already draw some conclusions and write a review.

Impressions and my review

To begin with, I will tell you how I traveled around Moscow with a bicycle carrier. First of all, after the mount was installed, I was wondering for the first week if

As you can see, nothing happened, so I relaxed and stopped paying attention to the arc with the mount. It seems no one needs them, especially not easy to remove them.

They gave me 2 keys, one from the cycle holder (for nowNo bicycle, you can not close), the second from the arcs. As I understand it, the keys can be picked up, there are about 120 larvae in total (if I am not mistaken), but the idea is doubtful. Yes, and then it is more profitable to remove the wheels, 1-2 wheels will be more expensive than mounting with arcs. But maybe there are cases of theft, I do not know. Looking ahead, I’ll also say that I left the bike several times on the roof unattended and no-one was willing, but, you shouldn’t do that, this is not a bike storage facility and is not positioned as protection against theft. 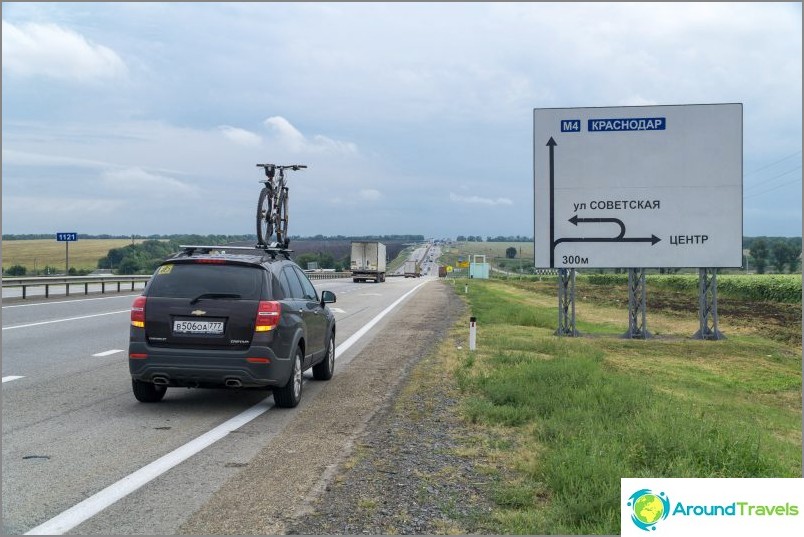 But the main test began on the trip. For the first 100-200 km I was constantly looking out of the window, looking through the hatch, shaking a bicycle at a gas station, everyone was trying to figure out if he was standing firmly there. After all, when driving, he swings from a headwind and irregularities. Then he realized that he was not going great anywhere and forgot about him. Perhaps if he were noisy, I could not forget, but I did not have noise. Only if the hatch is open or the windows, but I always drive with the windows closed. Without a bike, the noise from the mount and the arcs is even less, but it is obvious. I read that cheap and non-aerodynamic arcs create, if not whistling, then some kind of howl or other unpleasant sounds that can be heard at high speeds even through good sound insulation. There is no such thing, I accelerated somewhere up to 140 km / h - quietly. But usually I drove 100-120 km / h just in case, as advised in the store, and according to the rules of the road

Cycle carriers can be put on any side, butdefault is placed on the right. The instructions say how to change the side. Also on these arcs you can put another bike on the other side (you need a second bike carrier) and box. Someday I will do it too, I really want to go on a tour of Europe for a month by company (ideally several cars), take velas, tents, gear, and circle a few countries, staying in hotels and campgrounds, and periodically riding bikes in interesting places and cities.

For the winter period, the mount can be removed so as not tointerfered on the roof of the car. It is removed very simply and quickly, just a few minutes, twist off two twisters. There will remain gaps in the arcs, they will need to be closed with rubber inserts (they are included). But, probably, you can not shoot, as I wrote, it does not cause inconvenience, standing on the roof. 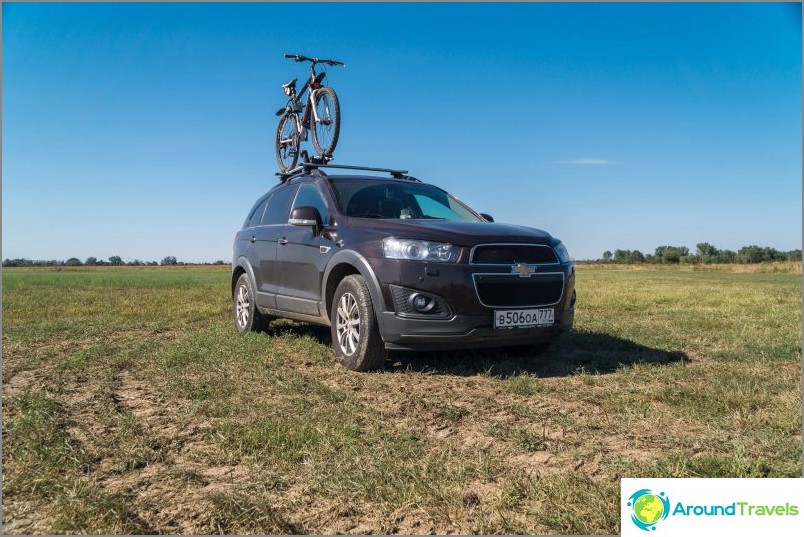 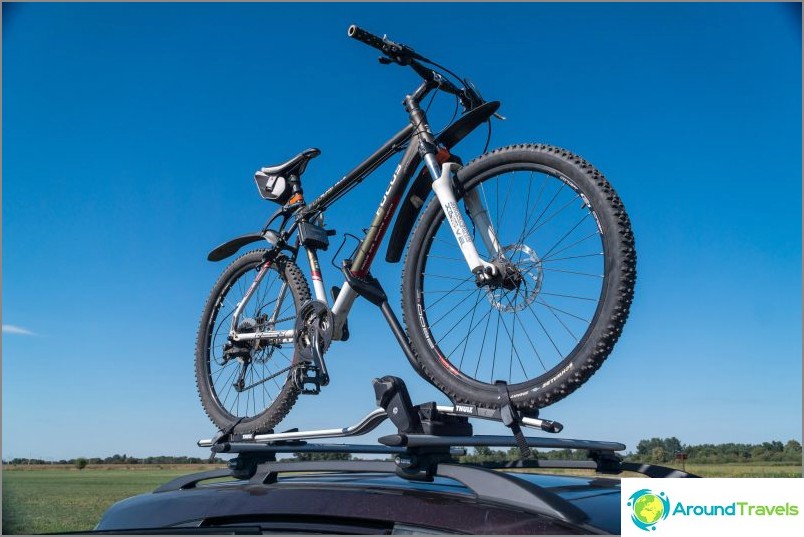 First of all, the bike clip has been redoneframe compared to the previous model Proride 591. Now the frame can not jump out of it. And then I wrote in social networks that in the 591st there was such a problem sometimes. If you look at the photo, you will see that now it is impossible. In fact, the holder with the flask there was superfluous and it was better to clamp it nearby, but it also holds on without any problems. 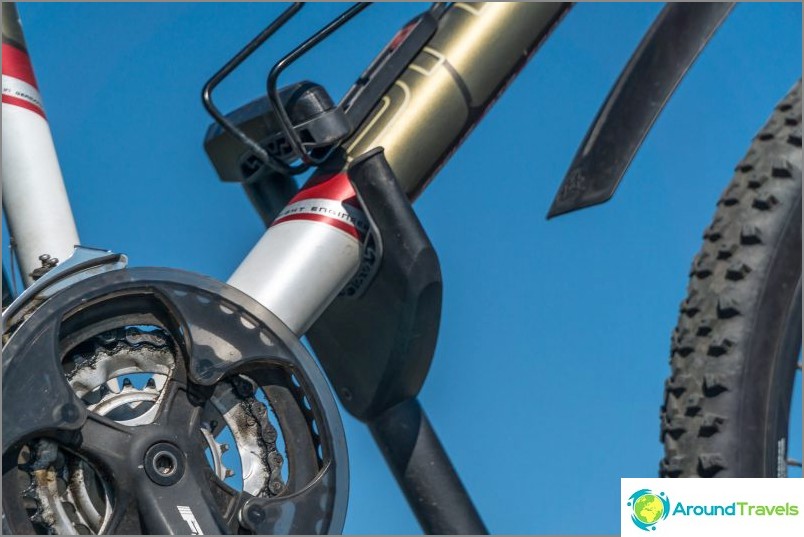 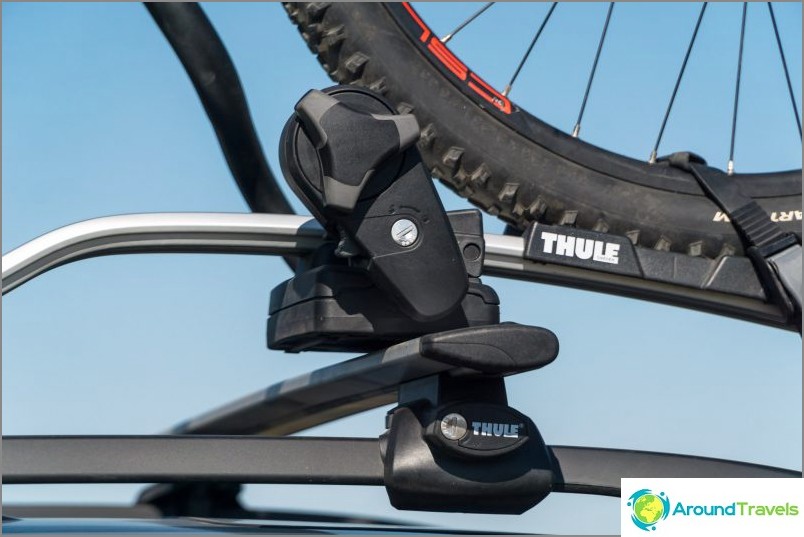 Plastic clamps now tighten bydiagonally, not exactly across the wheel. As I understand it, this was done so that when installing the bicycle on the roof they interfere less. So, they really do not interfere and the wheel is not pressed down. Moreover, there is a separate slot, where you can remove these clamps, while you put the bike, but without it everything is ok. There is also a closer, I do not know how else to call it, when you can even more tighten the clamp. 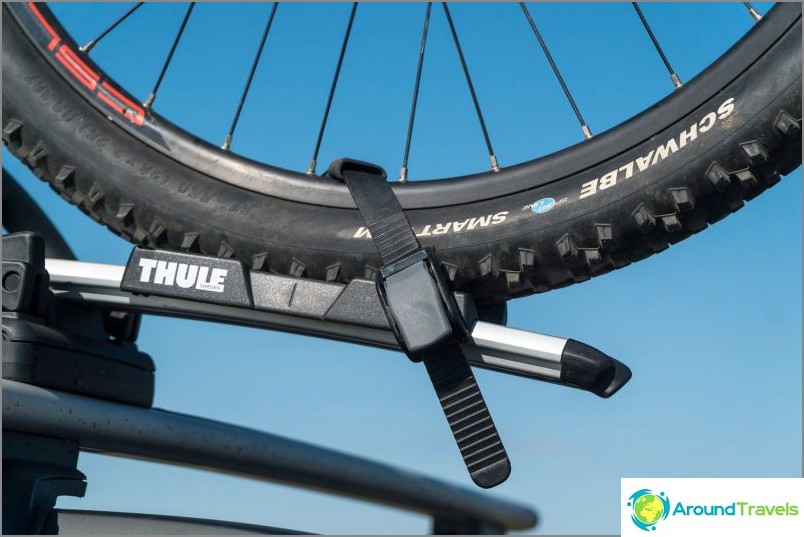 Wheels are tightened with plastic clamps with a closer

I found only two minuses for myself and both of them are rather not related to the very fastening of Thule, but in general to the type of fastening.

There are no cons at the back of cycling stationsdoor or hitch. However, such bike carriers require more serious installation, including drilling holes in the body or, accordingly, installing a tow bar. Yes, Thule has the same ones that are quickly installed without drilling and without a tow bar (look at the Thule ClipOn High 9106 or Thule ClipOn High 9103 models), but the fastenings on the back door have their disadvantages: they interfere while parking in the city to the impossibility of parking, plus access to the trunk will always be difficult. Most likely it will be convenient to put such attachments only for the time of the trip with the bike, when I can forget about it on my roof for even a year and never take off at all. In general, everyone chooses what is more convenient for him in the end.

Another disadvantage can be attributed to the price, because it costsmore expensive than competitors (here the price and characteristics), but the price is not much higher. Moreover, Thule is a well-known brand and overpayment (if it is considered an overpayment) goes for it, for materials and how everything is done. I personally have noticed not for the first time that in more expensive things everything is much better thought out and done. And if you take another good mount, then it will cost the same.

Who is more convenient to perceive in video format, there isvideo review. It is especially interesting to see how I epically shot a bike because of its short stature from a tall car. Plus there are a few views from the quadcopter, which I just started shooting.

P.S. Who used such or similar fastening, pliz, write, how they to you. Particularly interested in bike racks on the back door and turnbuckle, with which I have no experience.

P.P.S. An overview of what else to do?