I myself have never suffered from dengue fever (t-t),but some of my friends are not so lucky. There are too many myths around this fever lately, so there is a need to write this post so that you understand what it is, whether it is worth being afraid, whether it is necessary to make insurance, and how to avoid it at all. I hope this information will help you draw your own conclusions.

Dengue fever has 4 strains (serotype),which cause it, and 2 forms of the disease: the classical dengue fever and hemorrhagic. Hemorrhagic is a more severe and dangerous form, it happens only for those who have already had one of the strains, and, unfortunately, for newborns, if the mother has already had dengue and the child has received antibodies from it. So when deciding to give birth in Thailand, attend to the choice of a very good hospital.

Those who have been ill with Dengue at least once already know everything about her symptoms and treatment, and they are unlikely to read this post. Therefore, I will continue to write only in the context of the classical form.

Symptoms confirming it will be as follows: chills (temperature sharply rises to 39-40?), headache, area behind the eyes, muscles, spine and joints (mainly knees), rash appears on the skin. All this begins suddenly, without prior ailments, with rare exceptions, when a person has a headache and a feeling of weakness six or ten hours before the clear manifestation of the disease. Nausea, lack of appetite, swelling of the face, swollen lymph nodes, redness of the eyes and throat are also symptoms of dengue fever.

If the listed symptoms hit the spot more,than three points along with a high temperature, then there are three news for you: two good and one bad. The bad thing is that about 4-7 days ago, somewhere on the veranda of the hotel or in the evening, in a restaurant, you were bitten by an infected mosquito. Dengue fever is an acute viral disease, in which the incubation period varies from 3 to 14 days, so many “lucky ones” face symptoms already far from the tropics and tropical doctors. The good news is that you are not infectious to those around you, and Russian doctors have already learned how to detect the symptoms of dengue fever as well as Thai.

In no case should aspirin be taken,IBUPROFEN AND NUROFEN - this is the main thing you need to know when symptoms appear in the first days. As long as you do not know whether you have Dengue or not, consider, by default, that it is she and take only PARACETAMO to lower the temperature.

People get sick in different ways, so you canmeet, as a sad experience with a bunch of complications up to death, and vigorous reviews a la "a couple of days later released." One is sick for 2 days, another can die for 2 weeks and then recover for another month. As a rule, the temperature drops after 3-4 days and then jumps again for several days, 2 waves. During fever, the red blood cells in the blood fall dramatically, and it is for them that Deng can be absolutely confirmed. True, a blood test can be done not earlier than 3-4 days of the disease. That is, you already rewind half of term by then.

Dengue fever is not treated, there is no cure for it at all. Do you have insurance or not - be sure to go to the hospital. Although, according to some expats, there is no point in visiting a doctor at all if you have a classic form of symptoms, and you should run to doctors if you have hemorrhagic symptoms. But I would personally reinsure myself, especially if we are talking about a child, even for them the classic form can be difficult. So the doctor will be able to do the same blood test, say how to alleviate the course of the disease, and hospitalize if necessary. The main problem in children at high temperatures is dehydration, and sometimes without a dropper. However, an adult may need a dropper.

Due to nausea and lack of appetite you will notthere is, from this the breakdown only increases, moreover, people literally go holding onto the wall, and in their hands they cannot even hold a spoon. In this regard, of course, Dengue fever is a hell of hell. 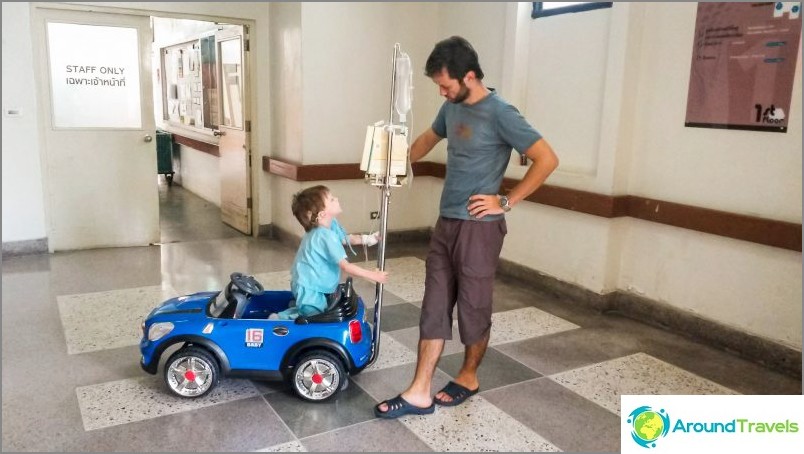 Sometimes Dengue goes to the hospital

How to avoid Dengue

Dengue fever is carried by Aedes mosquitoes.Aegypti and Aedes Albopictus. Basically, the sources write about eGeigty, although when studying the topic of Dengue, I still did not understand the difference between Egypt and Albopic. Both are striped, both live in urban conditions and easily tolerate near-zero air temperatures, multiply wherever there is water. After catching an infection from a bat, a monkey, or a sick person, adesa remains an infection carrier for the rest of their short life.

The only effective measure of protection fromThe dengue you can do for yourself is often to use repellents and mosquito cream (available in 7-eleven), spirals and fans in a hotel room or in a house. Every night, before going to bed, inspect all corners of the rooms, and especially in the closets where these bastards like to hide. The Tesco electric swatter machine - a stunningly efficient thing will help you a lot.

Peak hazard hours - early morning and hour aftersunset, so avoid freshwater and potentially dangerous places during these hours, and carry repellent with you. Try to choose a house with mosquito nets on the windows and no swamp nearby. By the way, in good resorts they periodically make anti-mosquito treatment. 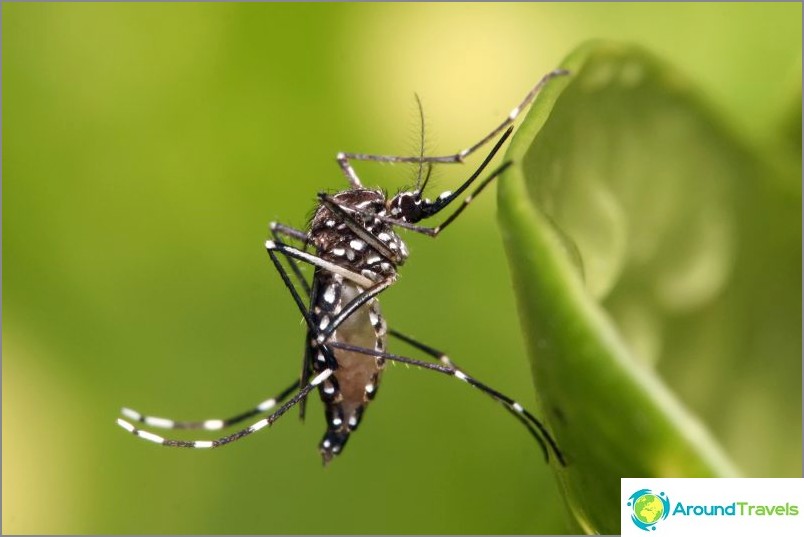 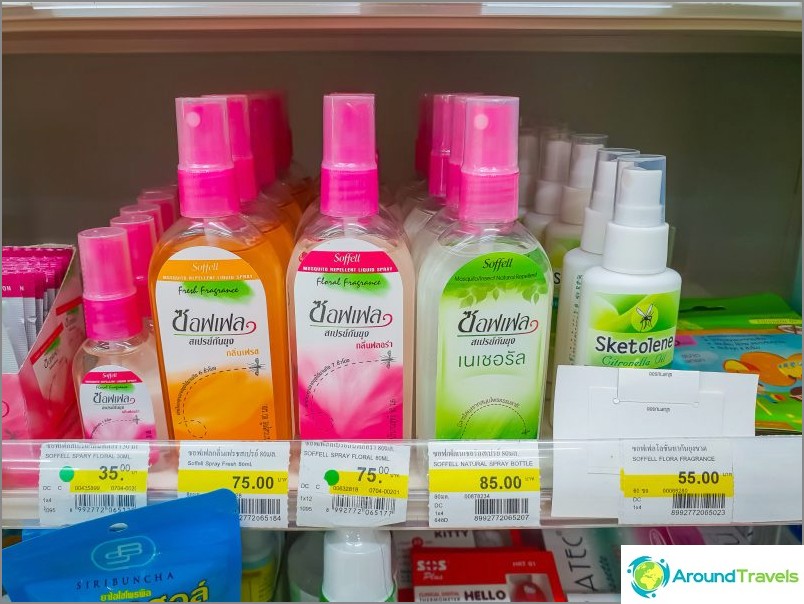 Mosquito repellents are sold in every 7-eleven

Another way to protect yourself from the effects of Dengue fever is to buy normal medical insurance (my rating of insurance in Tai), which includes dengue coating. Look at my rating, it says which ones insure and which ones do not. Currently, dengue is not covered: Consent, ERGO, Heide, VSK.

But, as I wrote above, with a short vacationit may well be that Dengue you will already be sick at home. However, always take honey insurance on your travels, especially children. I know what I'm talking about.

Hospitalization for dengue fever thingoptional, yes. But if you have a serious or repeated illness, you cannot do without a hospital, and medicine in Thailand is expensive. You can, of course, lie down in a public medical institution, but it will be a bed behind a curtain in the general chamber for twenty people, with the appropriate entourage. And you can be sick in a separate ward of a decent hospital such as Bandon Hospital or Bangkok Hospital, in the price range from 5-20 thousand baht / day. A week fell on a drip, then half a year working to repay the financial gap. Insurance in this regard is a necessary thing, one hospitalization immediately discourages years of insurance.

According to data from the WHO website (World OrganizationHealth), a person who has had dengue gets lifelong immunity to a particular strain and partial (or temporary) immunity to some of the remaining three. If you are unlucky with the second part of the bonuses, then if you are bitten by a mosquito-carrier of another strain, you have every chance of getting sick even 2 months after recovery.

For races of less than a year, the vaccination against Dengue on arrival does not make sense.

Since December 2015, information aboutvaccination produced by Sanofi Pasteur on the basis of the Dengvaxia vaccine, which allegedly protects the complex from all 4 strains at once. But upon closer examination of the issue, it turns out that the current vaccine against Dengue fever is not a panacea at all. On the WHO website you can find their recommendation - to apply only locally, on local residents, in areas with a real epidemiological threat. As you understand, tourists do not belong to this category.

First, for the full effect, vaccination fromDengue fever do 3 times every half a year: 0 months - 6 months - 12 months. That is, it will begin to work fully only in a year. To get vaccinated on arrival in Thailand, even if your wintering plans are a waste of time and money, because you can give ~ 7,000 baht to doctors for services and vaccines, and in a week you can get a mosquito bite at a nearby restaurant.

Secondly, even on the condition that you are willing to waitThe year before the flight to Thailand, such vaccination is not given in Russia. Thirdly, the effectiveness of vaccination depends on the strain (that is, it does not help all the serotypes the same) and on nuances like age, serological status and some other scary words, from which I realized that in percentage this can be expressed like this - on average 52%. That is 50 to 50 that the vaccination will work.

In summary, the Dengue vaccination canonly Thais and foreigners are interested in, who have a period of residence of a year or more, and therefore there are more chances to catch Dengue. Moreover, pick up, as the mild form of fever, and hemorrhagic. In the latter case, the dengue fever vaccination helps a lot to ease the course of a complicated form, although the percentage ratio there also jumps.

Probability of getting sick

As a resume, I want to write you the following: despite all of the above, you have less chance of getting sick Dengue in the very mosquito site of Thailand than the Thai have the flu in a subway car in the winter. Dengue is a virus that flows without snot, coughing and is not transmitted by air, unlike flu. That is, you do not need to isolate yourself from your family or hide from a sick spouse.

Danger of complications or deaththe outcome of the flu is no less likely than that of Dengue. It’s just that the media (from there all fears and fears spread) do not like to talk about Russian misfortunes such as tuleremian mosquitoes or encephalitic ticks, and the influenza epidemics have not been as high as the exotic Dengue fever in Southeast Asia . As soon as you meet the next panicky message about a mass disease in Thailand - wave your hand at this and do not even think of handing over the tickets.

How to buy ERV insurance is cheaper without a promotional code ...

How to remove baht from Tinkoff card in ...