Dongtan Beach - a neat and quiet continuation of Jomtien

Dongtan Beach is a pretty placewith paths in the shade of a palm grove, while almost in the center of the city and easily accessible. Large and nice hotels and condos overlook this beach, so cleanliness is followed here. The beach is not very crowded and quiet. At least, this impression is created.

Although there are people on the beach. These are mainly European pensioners. Next to Rabbit Resort

Gay men are traditionally resting, this is a famous place for their parties. Cafe is not everywhere throughout the beach, in the part that adjoins Jomtien (in the south) they are available, of European class and designed for foreigners.

In the north, the beach adjoins Pratamnak beachwhere there is also a calm and rather respectable public.

The beach is 1 kilometer long. That is, if we assume that it starts from the police station and 7-Eleven, where Jomtien Beach Road turns at a right angle and goes into Thappraya Rd. And stretches to a small cape right behind Pattaya Park.

After cape begins Pratamnak beach (it stretches for about 700 m to the stones, furtherwhich along the coast can not be passed), but, however, the border between these two beaches is purely speculative. Physically, this is all one beach. On the Internet, they are often either confused or merged into one beach.

The width of the Dongtan beach is about 40 m in the widestplace, open sandy part, by the sea, usually about 20 m. There is a conditional walking path along the whole beach. In fact, cars and motorcycles drive on it, just individually, not massively. Although quite often. But in appearance it is purely a pedestrian zone.

Between the walkway and the sea, in that part of the beach thatcloser to Jomtien, a palm grove grows, a line of casuarinas along the sand on the beach. These are such tall trees, similar to conifers, only with soft "needles". Small prickly bumps pour from them, and beneath them the air smells slightly like pine needles.

All over the beach, deliberately clean and tidy. There are buildings with a shower and a toilet in two places, garbage bins along the tracks, massage on the rugs, even the “free wi-fi” sign was noticed in one place.

Almost all along the beach are swimmingsurrounded by buoys, the top looks like a huge bracket 900 m long. The part that is opposite the water park of Pattaya Park, adjacent to a small cape, with almost no shade and sun beds, - without buoys. It’s like the wild part of Dongtan Beach. At high tide, the entry into the water is quite sharp, after a few meters already above the belt.

During low tide, especially in its extreme stage,you need to walk ankle in the water for a long time, more than ten meters. Strong waves at the end of the season, wind. The bottom is good, without large stones and shells. In season, the sea is mostly calm. During low tides, from the end of February, especially in the hot season, there is often a strong wind and waves. Swimming in Dongtan during big waves is difficult.

There are several zones throughout the beach. After 7-Eleven and the police station there is parking and a wide palm grove along the beach. Casuarinas grow closer to the water. Little remains between the water and the grove of free sand, only a few meters. Under the casuarinas there are dense rows with sun beds and deck chairs under the umbrellas. The first row is almost in the surf.

After 350 meters, the trees almost disappear andthere is a zone of continuous umbrellas and sunbeds under them, in many rows. Next comes the almost wild beach, casuarinas grow closer to the path, beneath them free sand, you can sit and lie on your mats. A little further away, the trees run out, a wide strip of sand without shade and a volleyball court. This is opposite the fence of the water park Pattaya Park. Further the cape begins Pratamnak beach. 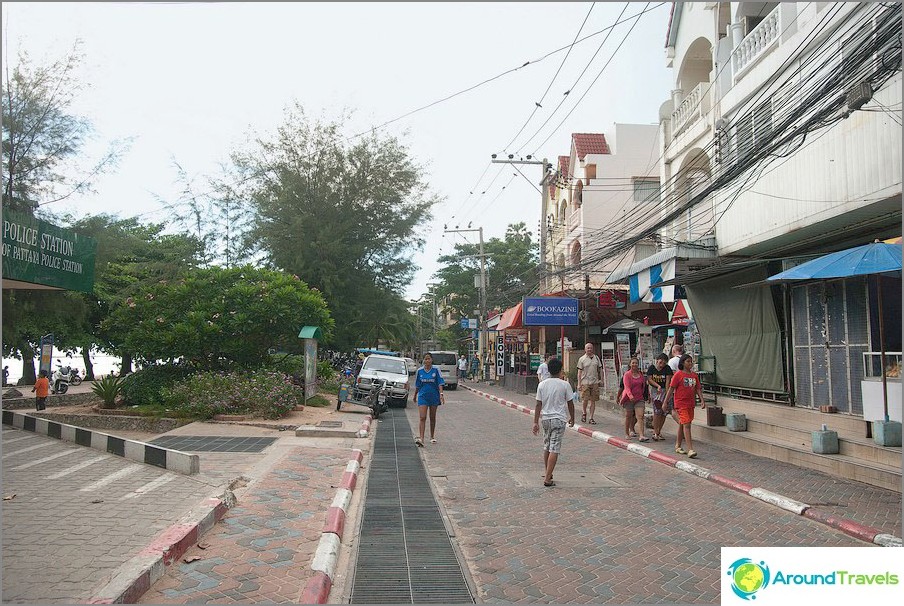 The very beginning of Dongtan, on the left - the police station 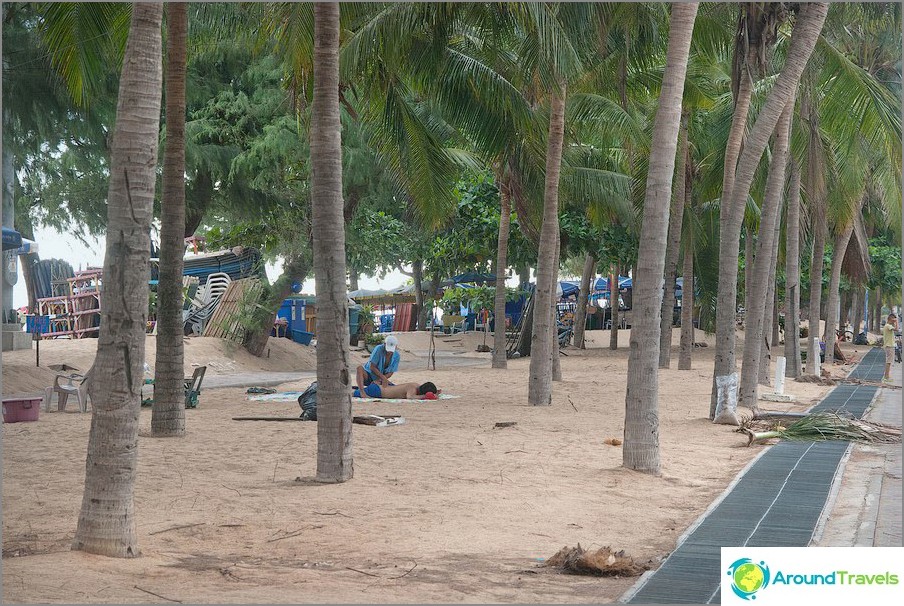 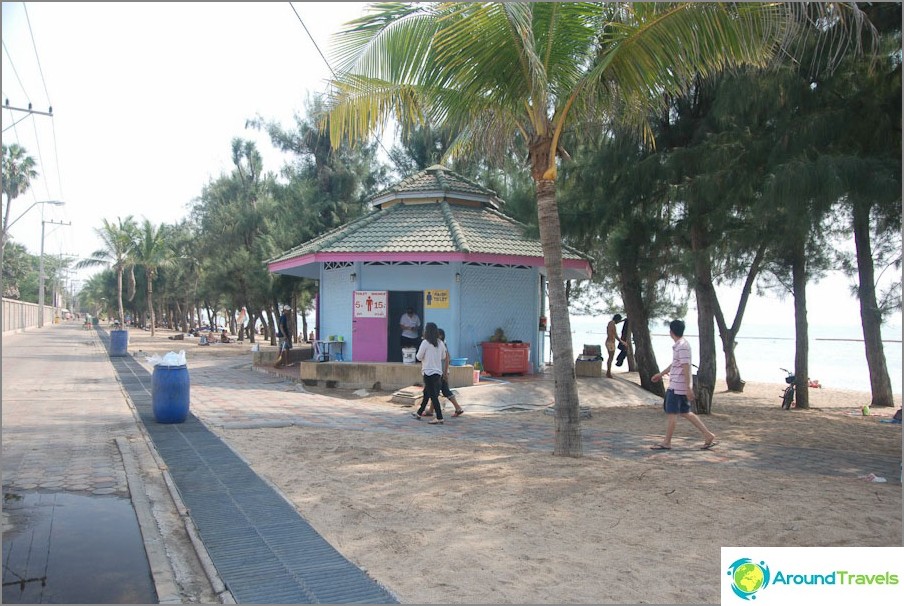 Building with shower and toilet on Dongtan 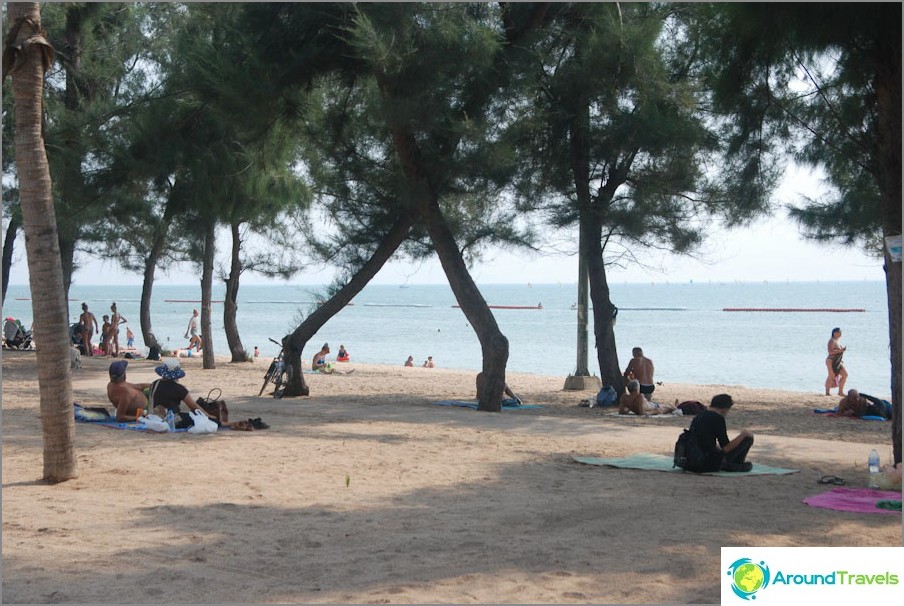 Beach section with casuarinas and without rows of sun beds 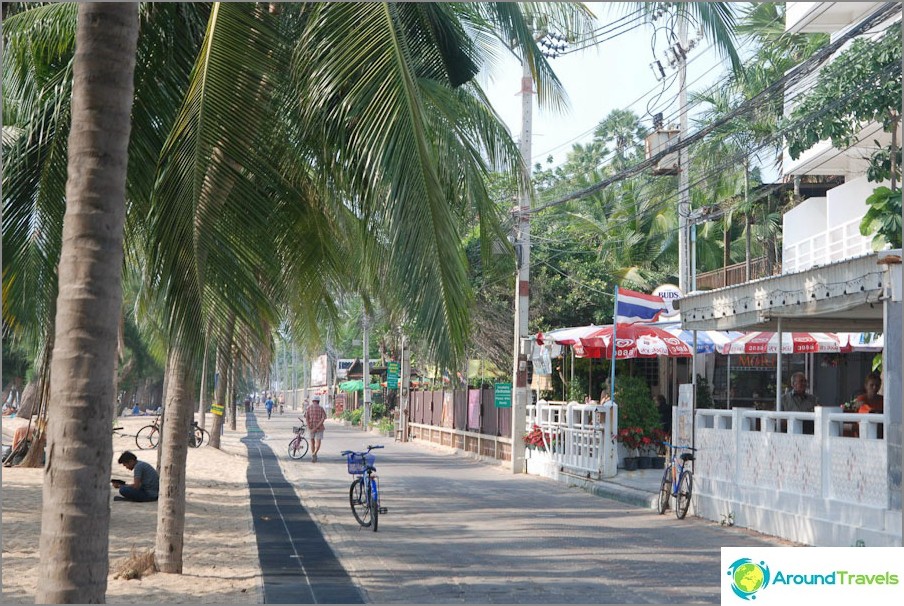 Pedestrian area along the beach 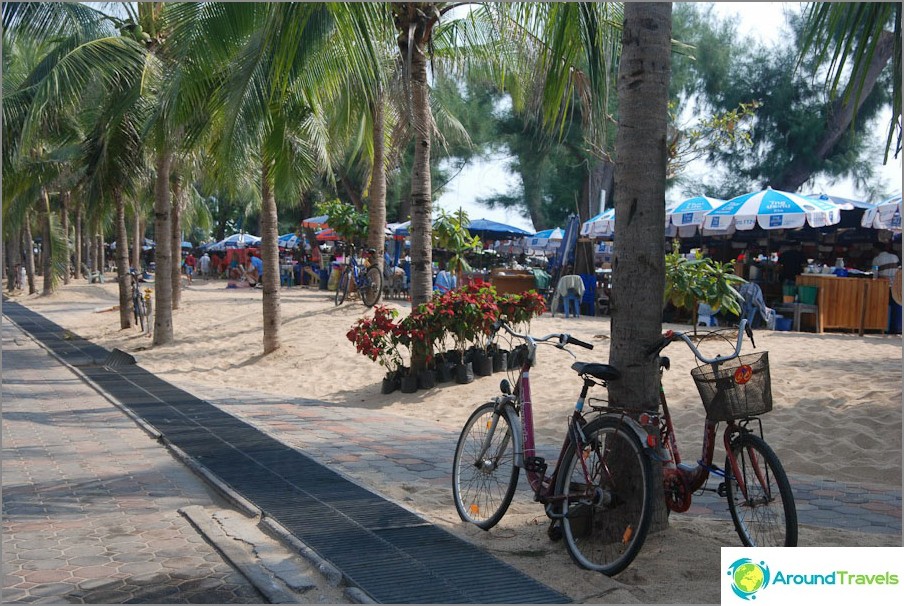 Palm grove between the walkway and the sea 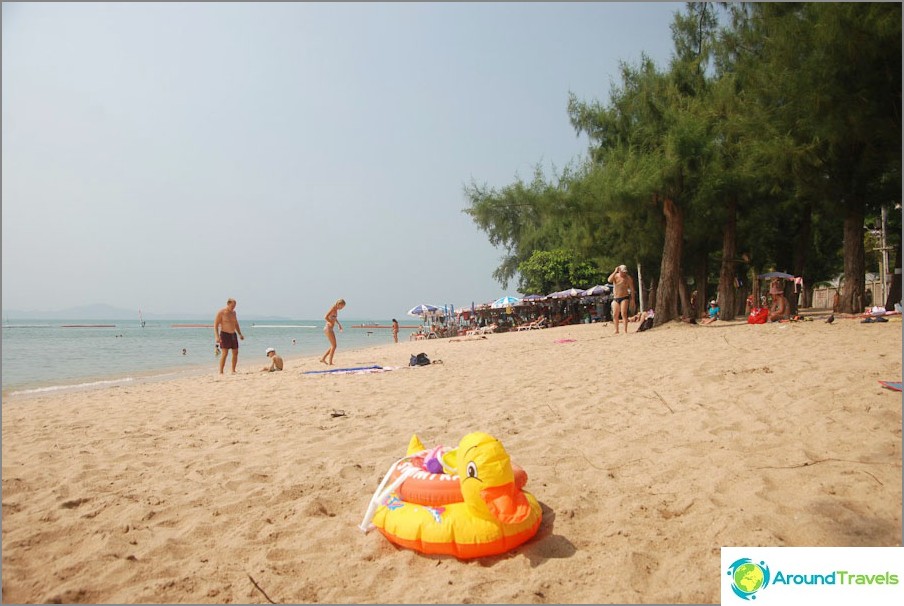 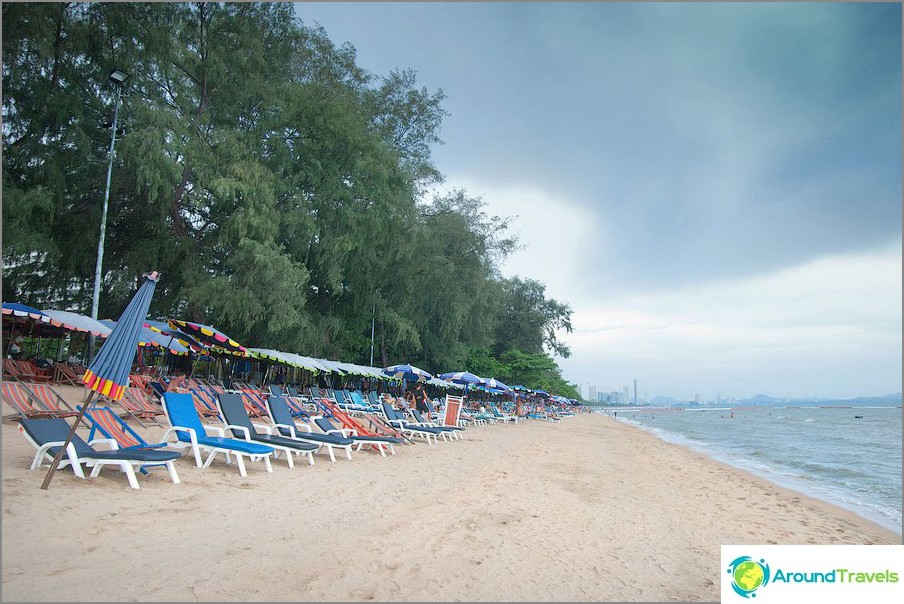 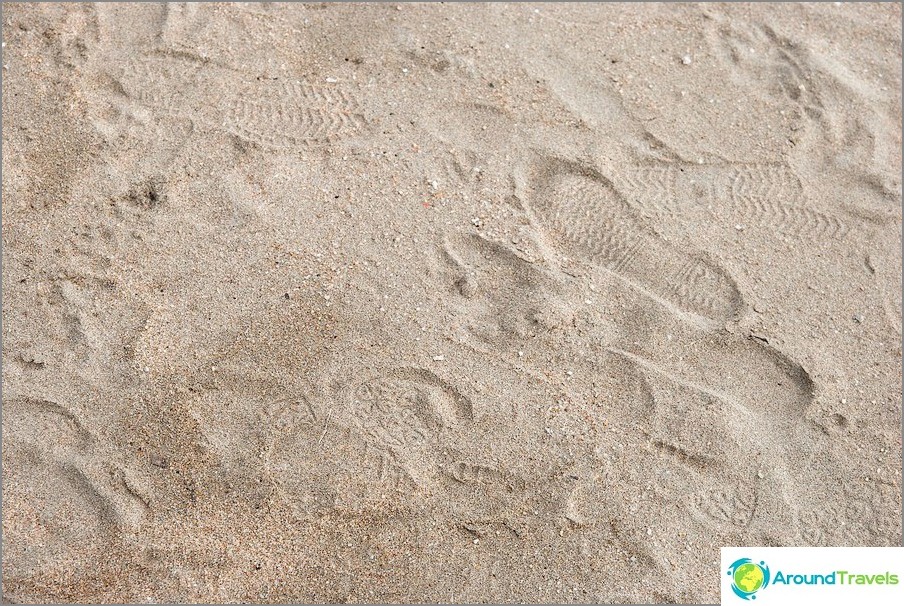 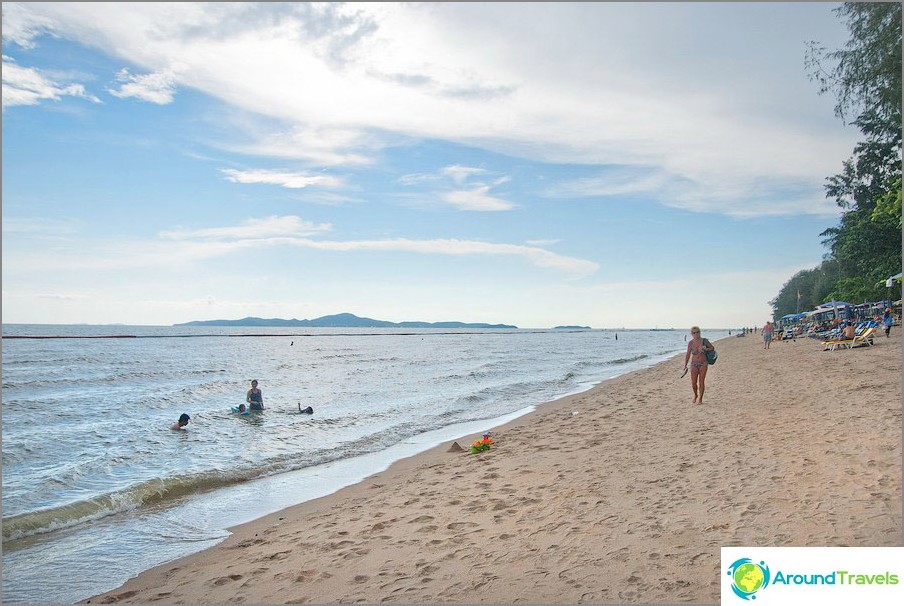 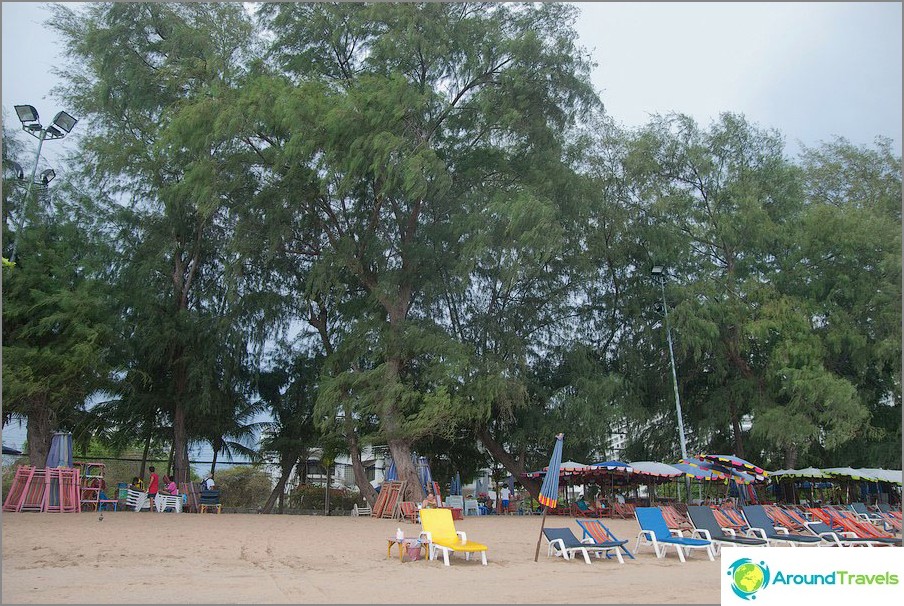 Casuarinas grow along the beach 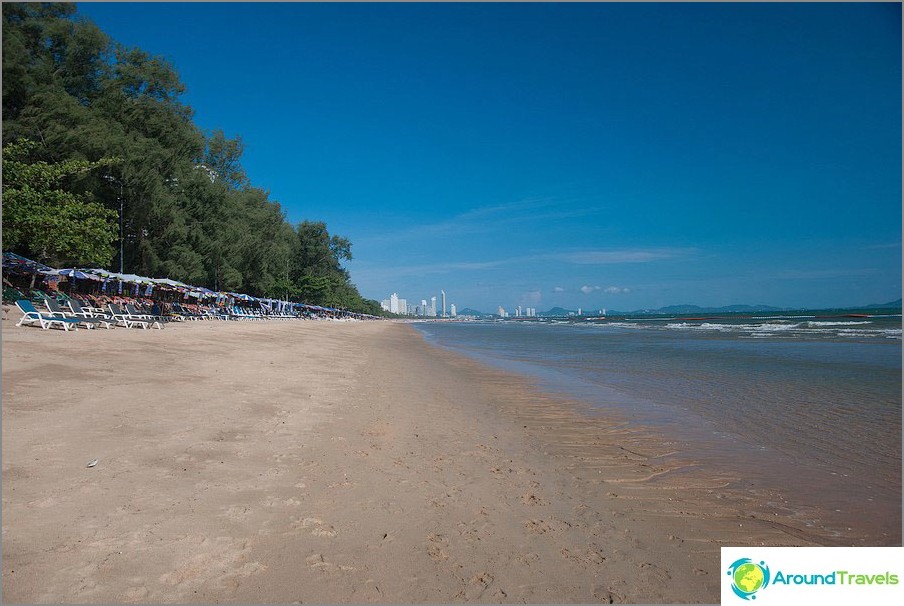 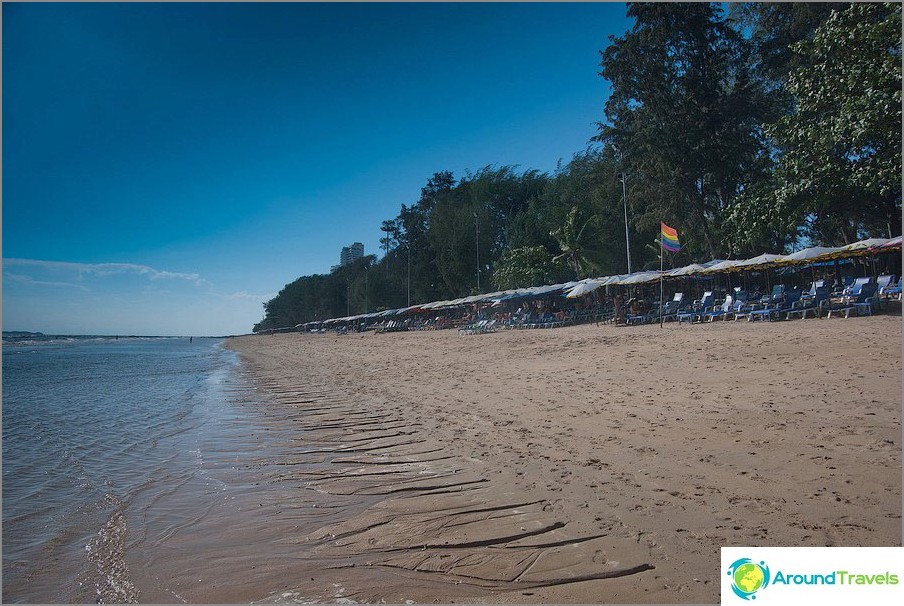 View towards the beach Pratamnak 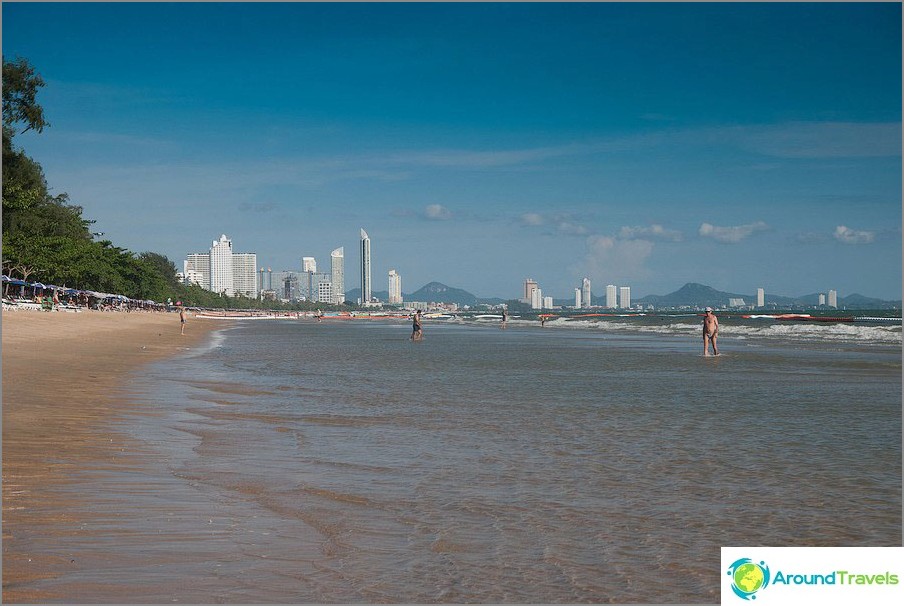 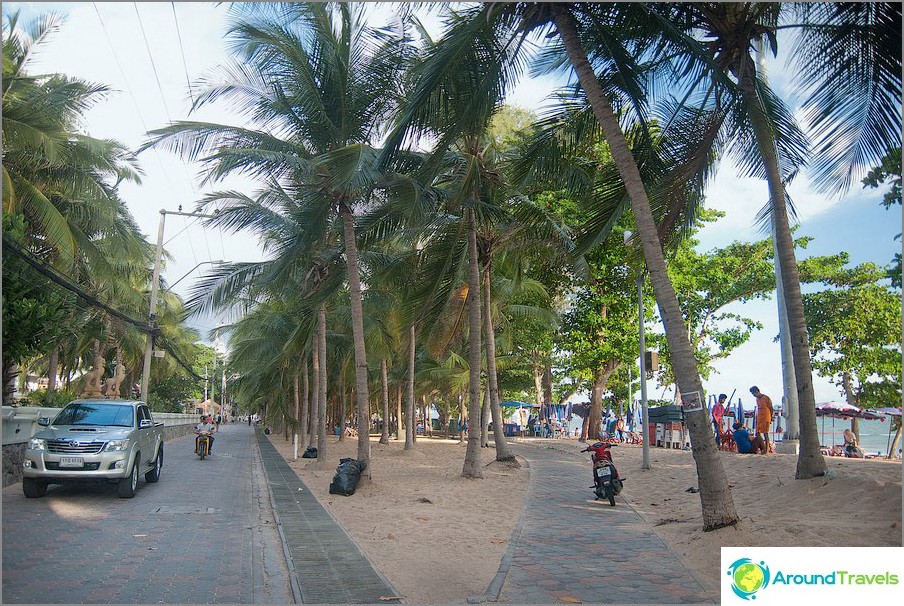 Palm Alley along the beach 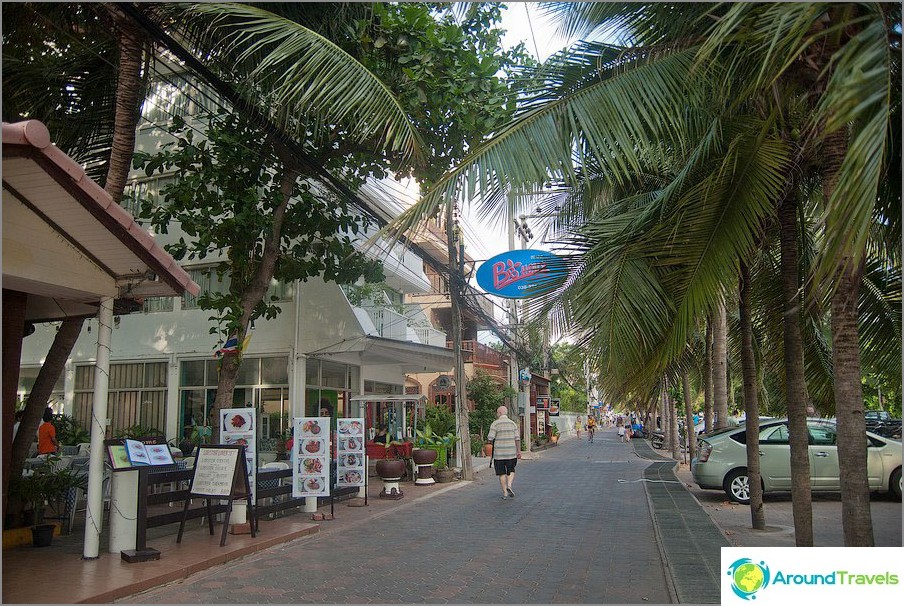 Cafe at the beginning of the beach 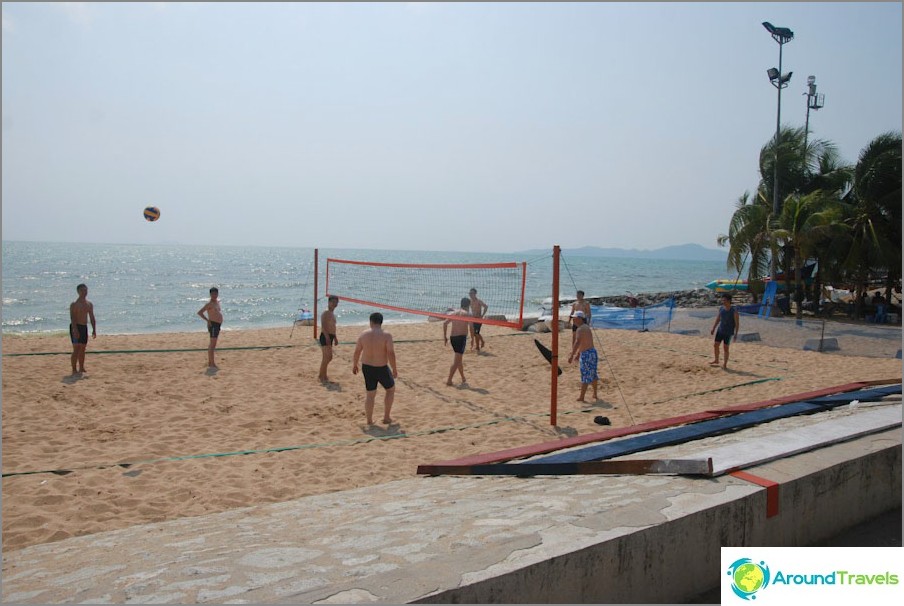 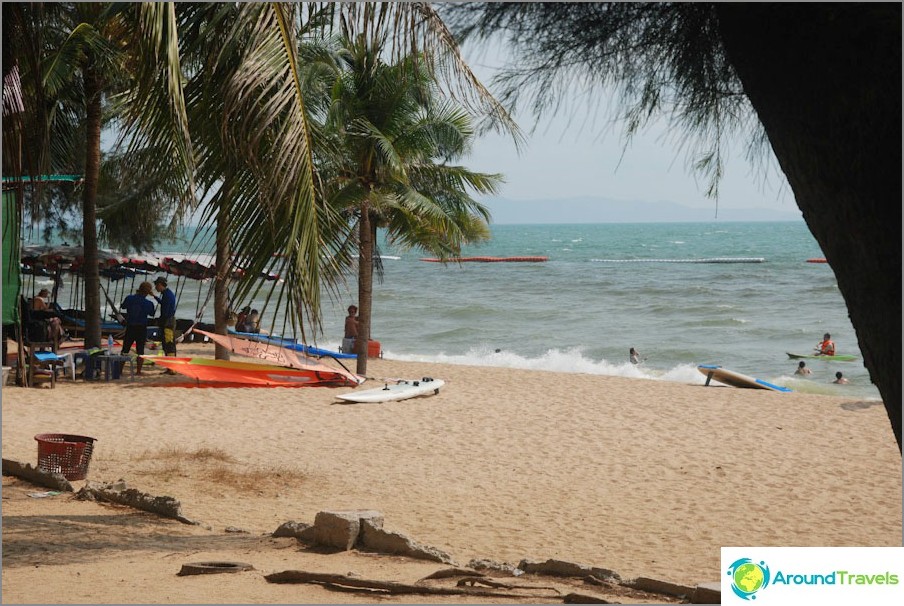 In 2017, they began repairs on Dongtan. We are waiting for what to do. But while there is a building there, it’s not worth staying at the hotel, in my opinion. Although the construction is only in that part, which is adjacent to Jomtien. At the beginning. In the opposite part, which is next to Pattaya Park and Pratumnak, calmly. 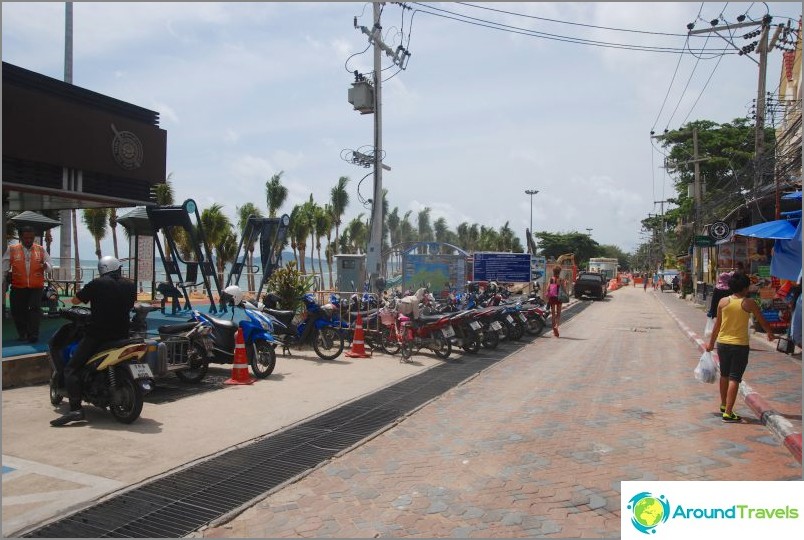 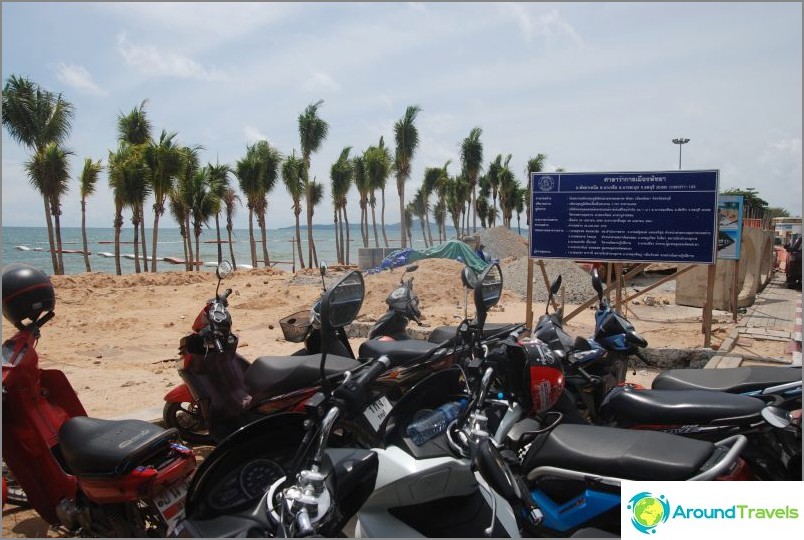 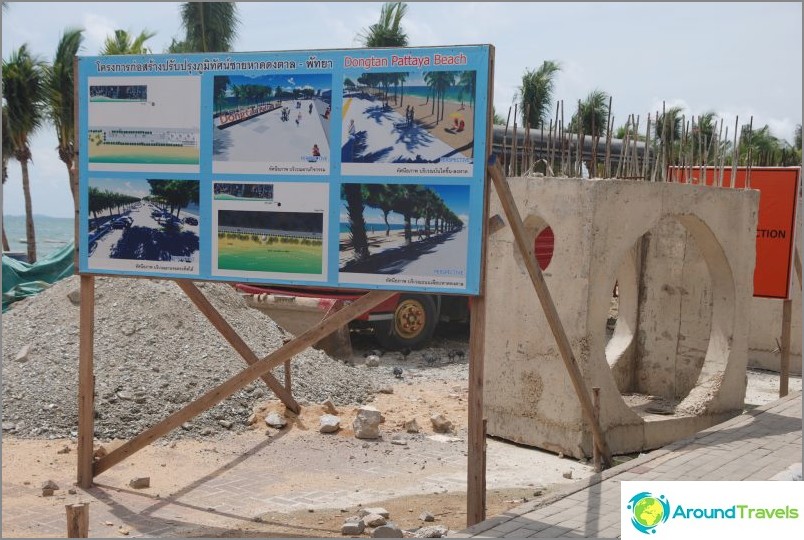 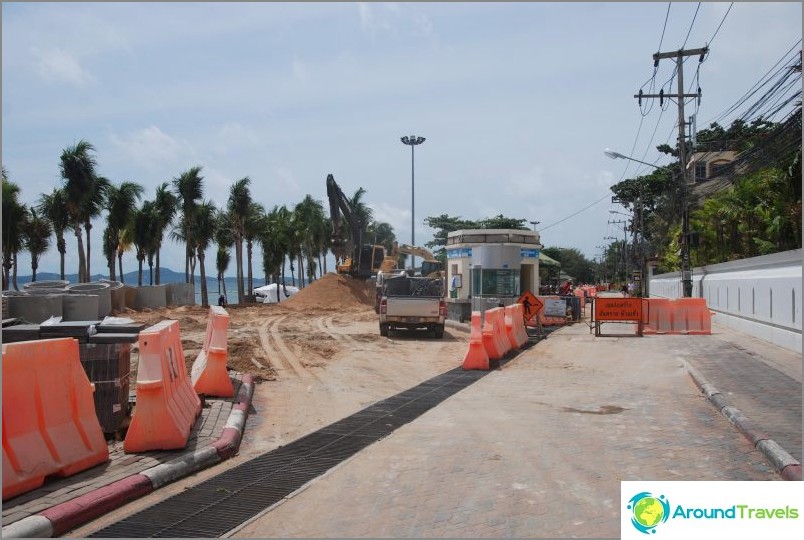 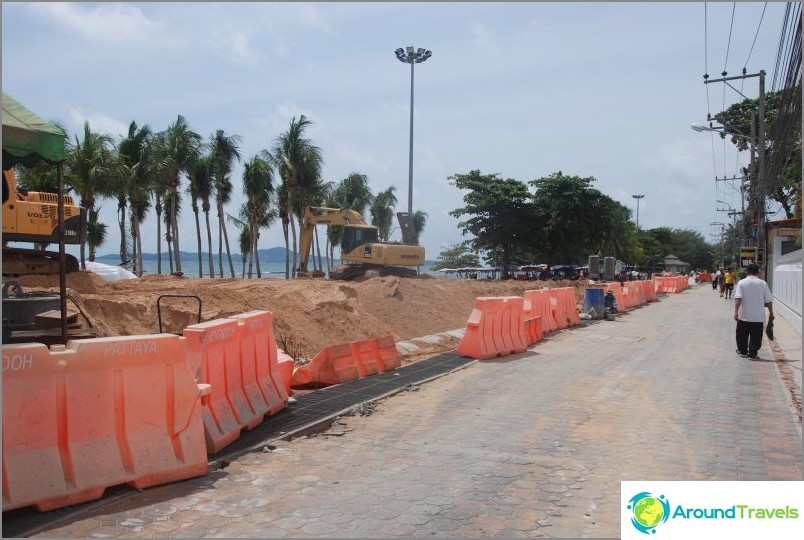 There are no large shops on the beach, on the border of the beach with Jomtien There is 7-Eleven, then - several cafes for Europeans. In the same place, near to a parking - fitness in the open air in the evenings.

At the cape, near Pattaya Park, - hire boards andwindsurfing, beach volleyball court. The rest is standard water activities, such as jet skis and bananas. Traders walk along the beach, stalls of drinks, coconuts and the simplest snack.

The biggest attraction of the beach is the water park Pattaya Park and its tower, which offers a breathtaking view of Pattaya. From it you can go down the cable car directly to the beach.

Then you can go along the sea to Pratamnak beach and then go to 5th street, i.e. be in the Pratamnak area. Between Tappraya Street and Welcome World Resort & Spa is the “gay quarter”, next to the Rabbit Resort, the beach is also considered “their” place.

, here you can rent an apartment for a long time.

. In this part, closer to Jomtien, there are also small guesthouses, but deep in the area, without access to the sea. The exception is B.B House, it is small, but it stands right along the path along the beach.

Closes the series of hotels, whose territory goes to the beach Rabbit Resort

, further the vacant lot and the territory of the water park Pattaya Park and Pattaya Park Hotel Water World Hotel

. After the cape there are also hotels and condos, but they are more related to Pratamnak beach.

There are no houses for rent right on the beach, at leastleast, at affordable prices, they should be looked for in the Jomtien area and inland from the Dongtan beach, closer to the city center. Several expensive villas by the sea can be seen on the border of Dongtan and Pratamnak beach.

Dongtan is located between the beaches Pratamnak and Jomtien. I must admit that many call Dongtan Pratamnak beach and vice versa. There is no clear boundary between these two beaches, physically all of these beaches: Pratamnak, Dongtan, Jomtien - one coastline. And straight, without concavities.

The easiest way to get to Dongtan is from Jomtien -If you walk in a straight line along Beach Road, Dongtan begins at the police station. The place looks like a sharp turn Beach Rd. to the right, from the sea, and turning it into Thappraya street. And here is right, between the police station and 7-Eleven, the path begins along Dongtan.

The other end of the beach is a cape, in front of which is a longfence water park Pattaya Park. Behind the cape it is already Pratamnak beach, on which the 5th street of the Pratamnak district goes. Leaving it on the beach and turning left, after 5 minutes we arrive at Dongtan by walking.

You can drive to the beach by public transport.just like before Jomtien. You must leave at the corner of Tappraya and First Beach of Jomtien Road, near the 7-Eleven store. There, at the beginning of the beach, there is a large parking lot for private vehicles. Further along the beach - on foot, along the path. True, motorcycles, and the cars on it from time to time, too, drive, but local. It is not only possible to ride a bike here, but it is also very convenient.