Most recently, I voiced my Macbook Pro 13 Retina Review and now, as promised, I publish a mini-faq on the subjecttransition from windows to mac. If someone remembers, then at the very beginning I once asked a few questions about the use of poppy. Then I asked if there was some kind of manual for beginners in the network. I have been advised a lot of things in the comments, but nobody gave the links to the consolidated post, apparently everyone figured out it themselves without any problems. In principle, this is indeed the case, it is not difficult to understand, much easier than it seems. But nevertheless, I still wrote this article, which will be what I needed then. Someone may be useful in the transition.

On the touchpad there are both tapas and clicks (pretty toughpressed), as well as various gestures. Therefore, first of all, you need to go to Programs / System Settings / Trackpad and see all that is there, some of the questions will be completed on this. The touchpad is excellent here, and I still do not use the mouse fundamentally, I hope to get used to it without it, since traveling with it is not always convenient because of the need for an additional surface. 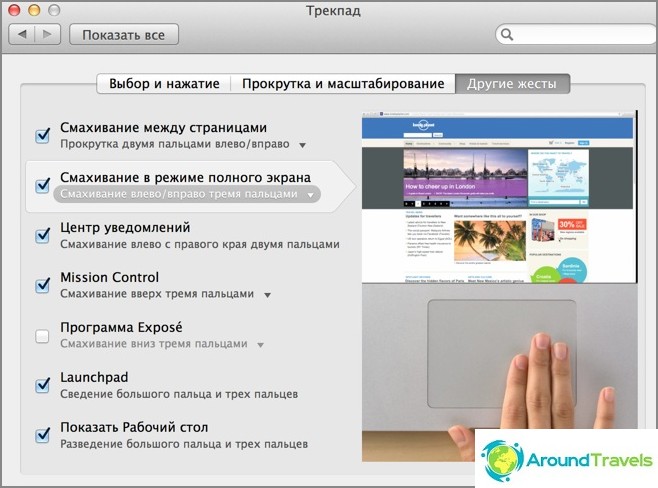 Gestures on the touchpad

I will list the most basic actions on the touchpad.

Select text: click on the touchpad and, without releasing, select the text. And through double tap, as on Windows you will not make.

Moving a window or tab in the browser: Click on the touchpad and, without releasing, drag it to the right place. But it's easier to do with two fingers, one click in the lower left corner (the cursor should be on the window name), and the second drag. The second method allows you to drag to any distance, while the first is limited by the size of the touchpad.

Scroll down or up: at the same time with two fingers to lead up or down (very convenient).

Gesture three fingers up: we get into the mission control, or if, in Russian, then all windows are reduced and we see all running applications on the desktop at once. By clicking on the reduced window it is now very easy to go to the necessary application.

The last two gestures, it's just mega-convenient! I can not imagine now how you can work without them.

I recommend using multiple desktops, it is very convenient to navigate between them using a gesture on the touchpad (three fingers left / right) or hot keys control + left / right arrow. 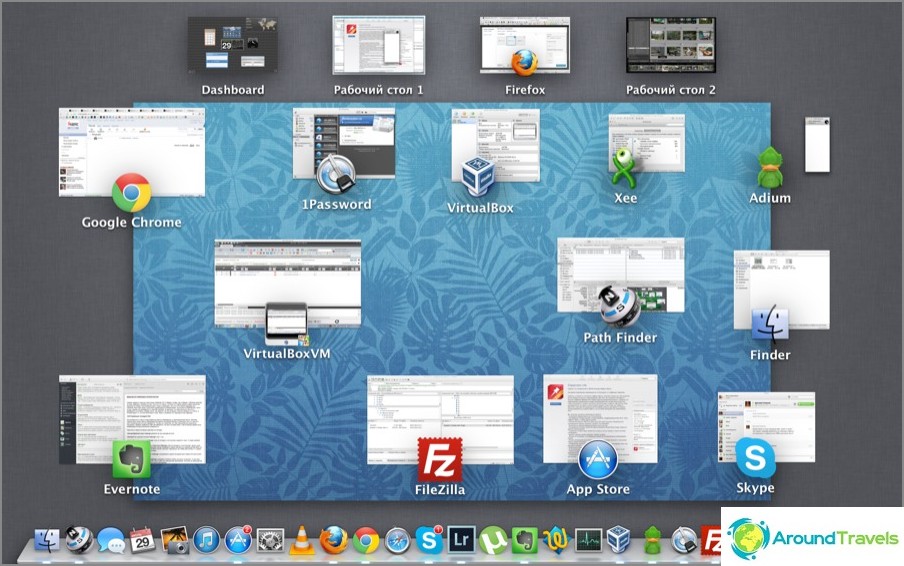 Desktops can be created while in modeMission Control. On any desktop, you can run the required number of applications or transfer there already running. Someone, for example, on the subject distributes: work, communication, entertainment. Also, any application switched to the "full screen" mode (usually this shift + cmd + F) itself creates a new desktop. However, in this case, on this desktop, you can only find one. Thus, we have the necessary number of desktops, each of which contains, or one full-screen
application, or several applications windows.

What is convenient is that the basic combinationsvalid for any program, such as “open settings”. It will work everywhere. No less convenient that you can create hot keys for yourself for almost any action in any program. This is done in System Settings / Keyboard / Keyboard Shortcuts. 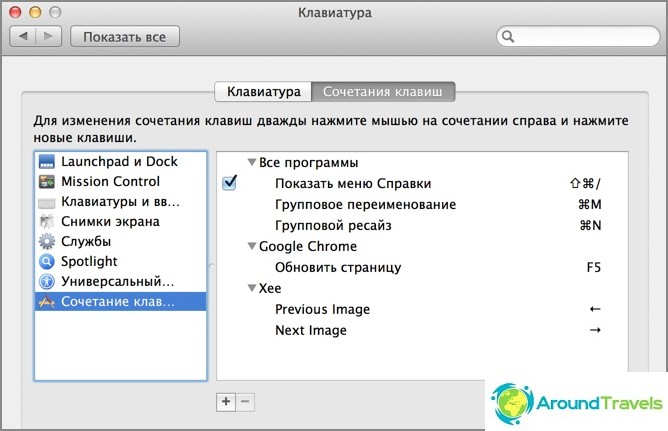 Close hung application: option + cmd + escape. Or we open the System Monitoring (found in the programs), this is an analogue of the Task Manager, and there we select the process for closing.

Hide the Dock panel: option + cmd + D. Frees up space on the screen, and appears only when you hover over.

Launch the spotlight window: control + space. Spotlight is a global search by Mac.

Out of the application: cmd + Q. Not quite an analogue of the red cross, because some applications with clicks on the cross remain hanging in the background. And then the full exit.
Close the application window: cmd + W. It is convenient to close tabs in the browser or the Finder window (it always opens with a window, as it were).

Discovered unpleasant news that Windowsand Macs are different file systems, which means that an external hard drive can be used by default either with a MacBook or with a Windows laptop. That is, my hard disk, formatted as NTFS, is seen on a Mac, but you can only copy files to it from it, but you cannot write it back. In fairness, I can say that if you hard reformat to HFS + (Mac file system), then Windows will not see such a disk at all, either for copying or recording.

More or less ways out of this situation are:

I acted differently. Since the files on the hard are very important to me, they are sometimes in my only copy, as well as this disk is working and I work with it every day, then for me the choice is obvious - HFS +! This is the most stable and secure solution, and you don’t need to put anything extra anywhere. But since sometimes I have to flip files with a Windows laptop, I also created an exFAT partition of 50 GB in size on the disk, this is quite enough to transfer files to Windows or work with this disk on it. As an option, configure the network between the laptops, and juzat network drives.

Find all the programs with tablets can be on all sorts of trackers. You can buy or download free ones on the App Store or official sites. In fact, a lot of free software.

Lightroom - remained the same, there is a version for poppywith a tablet or for money. Instead, it is still advised cheaper, but not the worst at the same time analog - Aperture, but so far I have not set it up as unnecessary. And the analogue of Photoshop is Pixelmator, although you can also install Photoshop.

Built-in image viewers (there are two of them) byBy default, they do not allow scrolling through photos from one folder, for this you need to select a group of files and press enter or space, depending on which viewer you prefer. It was possible to get used to this additional action, but Raw they scroll through on Retina with a delay, besides, and small pictures are too small, the resolution is high.

And I set myself a free XnviewMP viewer. He scrolls everything quickly, and scales the photo under the retina (multiplies the resolution of the photo by two), and in it you can change the image format, frame the photo, and so on. The only bad thing is that it podglyuchivaet me a little, it is not memorizing some of the settings. I also set up the Xee and Sequential viewers, but they also scroll through RAW very slowly. Xee still stands and is used for scrolling through jpeg, maybe only leave it, because Raw began to look only in Lightroom. There is also a Viewer from the App Store for 169 rubles, simple and scrolling all of the folder, but also scrolls RAW on with a delay.

Punto switcher is a poppy version, it's a pity there is no diary in it, it's free.

Microsoft Office - is for poppy with a tablet or for money.

File manager - or built-in Finder,which is basically convenient, but only one window. Or I use the Path Finder, which is similar to the regular Finder, with only two windows (tablet or for money). There is also a Double Commander, almost a copy of Total Commander.

Webmoney keeper classic - does not exist for poppy,therefore, either put it on a virtual machine, or connect a webmoney mini to it for managing wallets, or register the browser webmoney keeper light again. I chose the first option so far, and then I want to make a light (I’ve been going for a long time), as soon as there is time to redo the personal certificate.

Password storage - 1password, free if notuse a subscription to their service. Capabilities: storing the database in a dropbox or on a computer, compatible with all browsers, you can watch the passwords through the Internet from the browser, if they are stored in the dropbox. Convenient program. Or you can store everything in a free Lastpass, it’s convenient that you don’t depend on OSes (this is an online service, not a program) and there are extensions for all browsers.

Instead of Qip - put Adium. Since I almost don’t use ICQ and I don’t need the old histori, this is a normal option.

Instead of Notepad ++, we put Textwrangler. A good program with syntax highlighting, allowing you to download files directly from ftp. I really liked. There is also Sublime Text, but something is not very good for me.

Instead of Denwer we put Mamp, there is a free version and a paid one.

There is no analog Key Collector, it can only be used through emulation.

Virtualbox Windows emulation, free. On the retina, everything looks so-so, plus the bi-directional clipboard does not work (update. Put guest add-ons, everything worked), the Internet is lost (update. In recent versions is already normal). So for serious work with Windows Virtualbox is not very suitable, but so far it will work for me. In fact, only because of Key Collector and Webmoney Keeper, I still use Windows emulation.

For higher requests, you need to install Parallels, purchased or with a tablet.

Separately, I want to mention such a built-inprogram like automator. With it, you can record various scenarios, various actions. For example, I immediately created a group rename of files and a group resize of images for myself. And each of these actions also assigned hot buttons. Very useful thing!

P.S. As a result, I got a much more convenient control (due to the touchpad and gestures) and all the same programs that I had on Windows or their analogs. Of course, not all the programs are mentioned here, but these are the ones that I needed. You can also read the answers to my questions in these commentsthere are other programs out there that haven't been useful to me.

P.P.S. I would be glad if you gave a link to this article to your friends that they are about to switch to mac.