Phangan - forever young and forever drunk island, wheretourist infrastructure is sharpened for young people and party-goers. Well, not so only on them, of course, but in comparison with Phangan, Samui Island is a pensioner on vacation. On Phangan there are a lot of places, the only purpose of which is a party in its own format. Not clubs, not bars with dance floors, but party. Of the three dozen existing tus I selected eleven of the most famous and sought after. Well, you can see a list of cool cafes and bars in the post. Bars and cafes on Phangan - what to do and what to do.

Full Moon Party on Phangan, it is the Full Moon Party, held on Haad Rin beach once a month at full moon. The very first such party happened in the late eighties, and then it was just an ordinary birthday party for one of the islanders. And at the present time, Full Moon Party collects from 5 to 25 thousand people, depending on the season. The party is large-scale and not tied to one institution - it is celebrated by everyone who has a restaurant and bar business on the coast.

Haad Rin at the time of the tus closed forfree passage and begin to take bribes - 100 baht. There are several dancefloors spread all over the beach, where they play their music, so there is a place for separation. If you intend to get exactly on this paty, then take care of housing in advance - you know, there will be an overdofig to the people and all the adjacent hotels and guest houses will be filled to capacity. 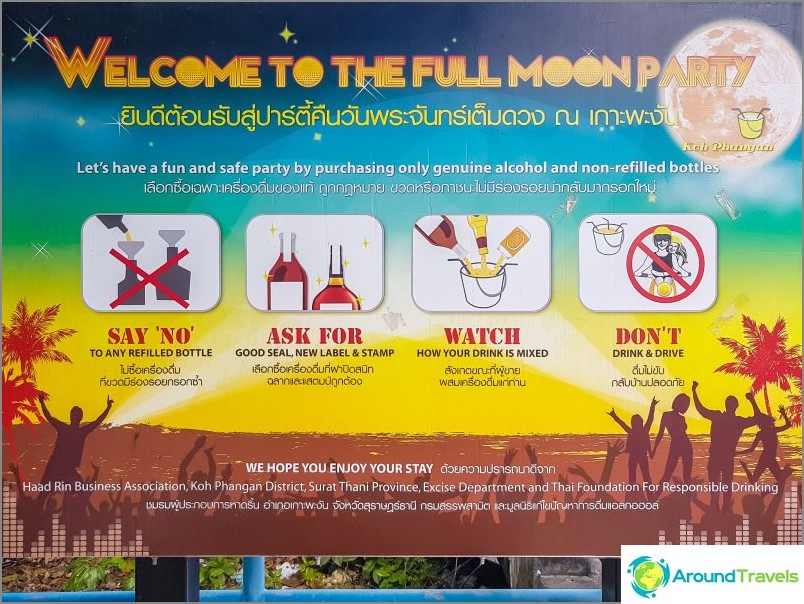 Half Moon Party or Half Moon Party -This is an alternative to Full Moon Party, or "When you really want, but the full moon has already staked out." Half Moon Party is held once a week before the full moon, and once a week after it, respectively. The organizers use the site of the island near the beaches of Ban Tai and Ban Kai, but not at the seashore, alas. The time is from 20 to 7 in the morning. The entrance is expensive - 500 baht, the music is played in the style of techno and trance.

Black Moon Party - Black Moon Party, whichheld next to the Mac's Bay a couple of weeks after the Fullmoon party, from 8 pm to 7 am. It is on Ban Tai Beach, an easily accessible and passable place. The entrance to the techno-tus is not cheap - 600 baht from the nose, but as a compliment from the organizers you will be offered one drink to disperse. Despite the cost of entry, the place is very popular, and in the high of dreams, world-famous DJs are invited here. Twist mostly trance.

Lost Paradise Party - it's pretty fresh.event (this article was written in 2018), which is held once a month, starting in 2015. According to experts, the party took the Pangan underground to a new level, thanks to its excellent location on the secluded Haad Yao East beach (not to be confused with Haad Yao in the west), excellent sound system and competent selectionperformers. Speaking of "secluded" I mean a really wild and inaccessible beach, which is difficult to reach by land, so there are no random people and idle tourists there. That is why the party is called “Lost Paradise”. I traveled there, 1.5 hours by pickup on a broken down primer, or by boat, too, can be, 20 minutes from Haad Rin. 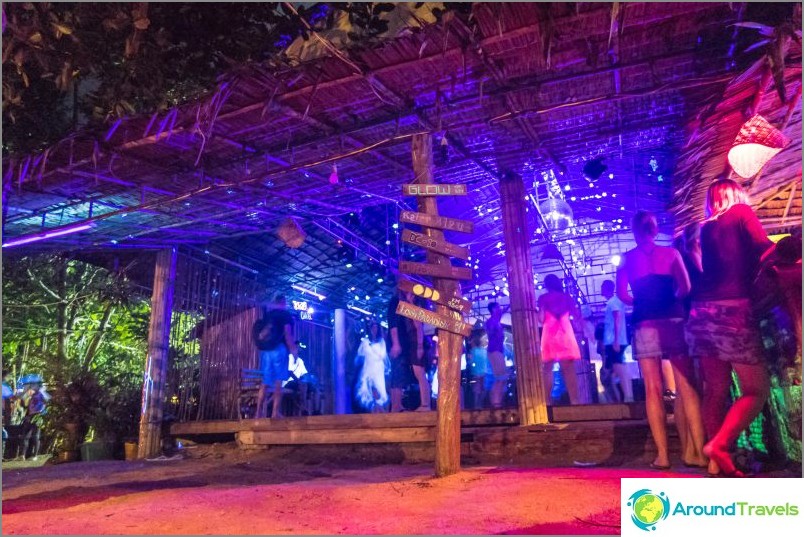 In addition to the purely parties, there are also cult bars, where parties for regulars start regularly. For example, near the beaches Haad Rin Nye and Haad Rin Nok, on the beach Lila beach the cult place of fans of "techno" is located. On the outskirts, at the foot of the mountain, right on the rocks along the edge of the sea, there is a small bar, in which parties are held in a techno music format. Behind the dance floor there are rocks from which you can jump into the water, and behind the club are small bungalows for the most penetrated. More details, photos and how to get there - Lighthouse - techno parties, bar and bungalows. 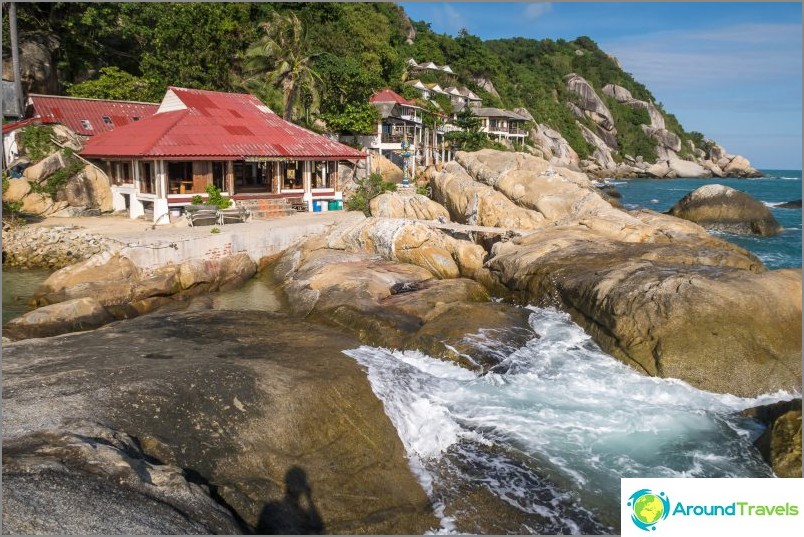 In the east of the island there are three hermit beaches: Wai Nam. Haad tian and Haad Yuan. So Haad Tien is remarkable becauseTwo places stand close to each other: Guy’s Bar and Eden Bar, which are deservedly considered to be cult bars where parties are held regularly. From 8 pm to 9 am every Friday (Guis Bar) and every Saturday and Tuesday (Eden Bar). The trick of institutions lies in the inaccessibility, so to come here by land is problematic, and by sea is not cheap. They spin house. Details with photos and how to get - Guise Bar on Phangan and Eden Bar are places of worship for parties. Shiva Muun Party is held at Ban Tai Beach,three days before, and three days after the full moon party, from 8 pm to 7 am on a small section with a bar and a dance floor where techno, psi-trance and house are played. If you are not yet in the subject, then Shiva is one of the main gods of Hinduism, but there is nothing from Hinduism except the name of God and the fluorescent pictures on the walls, for obvious reasons. For color around the perimeter of the dance floor can make fires at nightfall.

According to the title, this partyIt is held not on the beach by the sea, but in the depths of the jungle, near the Half Moon Party. Right in the middle of the jungle, something like a garden is organized, which is decorated with fluorescent and laser lights, with a bunch of lighting effects. Entrance to the territory - 300 baht, and this price already includes a compliment from the organizers - two drinks. Once a month (4 or 1 day before the Full Moon Party), from 8 pm to 7 am, there is a psi-trance, progressive house, electronics, and all this is on excellent equipment with a sound set.

Sramanora Waterfall Party is a partywhich takes place two days before the Full Moon Party and two days after, near the Sramanor Falls from 20 to 6 am. In the lower reaches of the waterfall there is an artificial font with fresh water (it is better not to drink it) where you can swim in the daytime, and at night - if you wish. There is little space around the waterfall, so the main party takes place at about 20 meters away, near small bungalows and the main building of the entire resort. Entrance fee is 300 baht (two cocktails included). Twist techno and house.

Original Poole Party is held on Haad Rin, onthe territory of the hotel Coral Bungalows, where there is not the largest swimming pool (approximately 10x20 meters, oval). The beginning of the party once a week, at 21 o'clock, entrance and parking for guests - free. There are not so many places for dancing, but you are not embarrassed by this, people are jumping right in the water. Prices for booze are about the same as in the store - also a significant bonus to such an event plan.

Prepati and aftapati grand Full Moon Party (well, or so it is considered, although I would not say so because of the distance from Haad Rin). Passes on the territory of the club Pirate’s (this Chao Pao beach) three days before Fulmun and two days after Fulmun. From 8 pm to 7 am there is a house and a trance.

This concludes my list of recommendations. Keep in mind that the schedules and the number of parties are constantly changing and I do not need you to say that you should always check the information in advance, Google to help you. If the list you have any comments or additions - send in the comments, it will be useful for all readers of the blog. 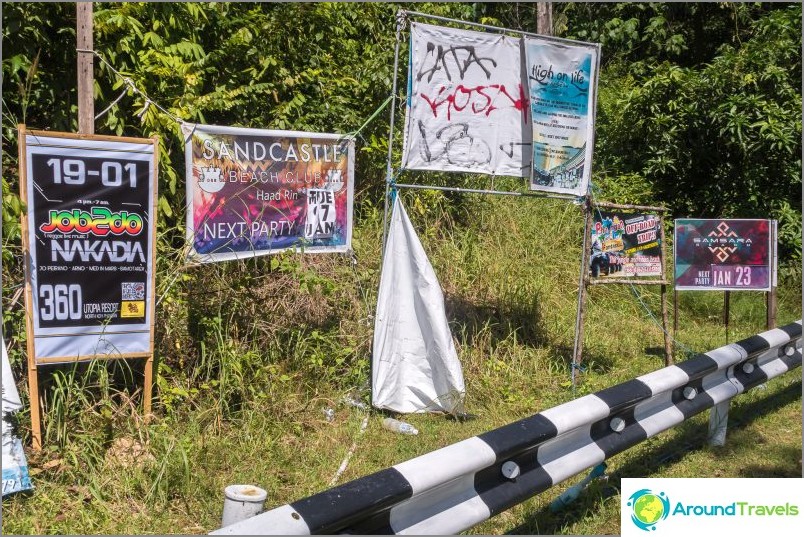 Posters pasted around the island, do not miss anything