Home>New articles>Golden Buddha Mountain in Pattaya - not a temple, but an image

Golden Buddha Mountain in Pattaya - not a temple, but an image

Khao Chi Chan or Golden MountainBuddha is one of the most famous sights of Pattaya. It looks like a contour image of the Buddha, lined with gold plates on the hewn surface of a limestone hill, towering above even ground. And the temple is located at the bottom of the mountain.

During the war, the United States and Vietnam extracted from the mountainbuilding material for the American military base. In 1996, in honor of the fiftieth anniversary of the reign of King Rama IX, so beloved and revered by the Thais, it was decided to create on the northern slope of the hill the largest in the world rock art image of Buddha laid out in gold; which, by the way, it took about one and a half tons to complete the project.

A part of the gold for the picture was donated.ordinary people, parishioners of Buddhist temples. The image was applied to the surface of the mountain by a laser, according to a program previously calculated on a computer. The laser operation took two days, and then for several months the circuit was manually trimmed with large gold plates. The image is more than 100 meters tall, about 70 meters wide. The Buddha is depicted at the time of enlightenment and symbolizes peace and tranquility.

The important point is not to confuse the Golden Buddha and Big buddhawhich is located in the center of pattaya on the hill andIt is a large statue of a seated Buddha, and not an image on a rock. Just sometimes, the image of the Golden Buddha is also called the Big Buddha, because the image is huge. 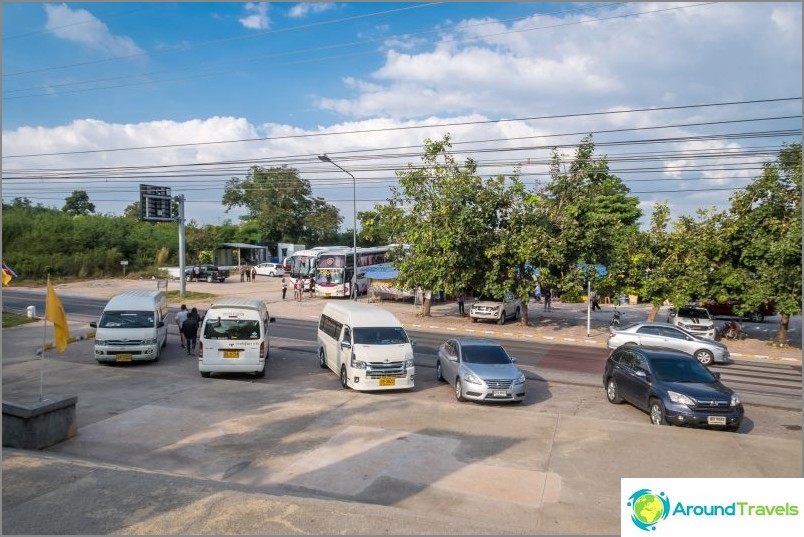 Parking by the road next to the mountain 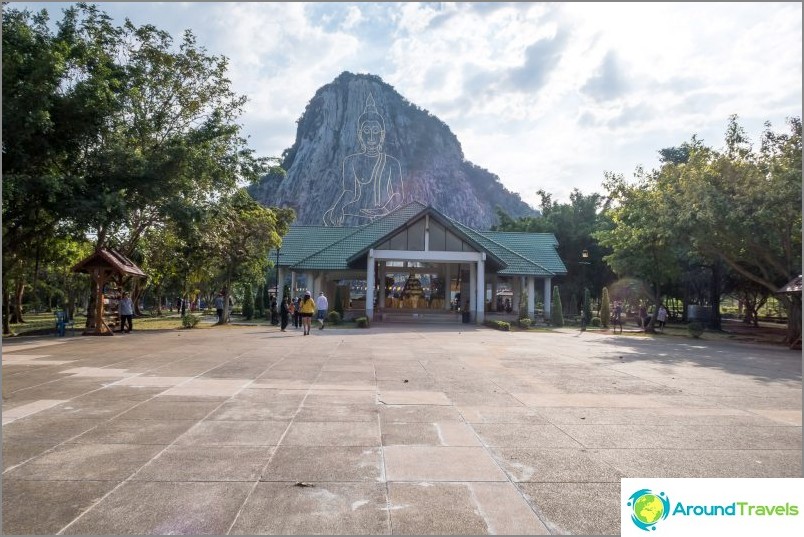 Mountain view from the road 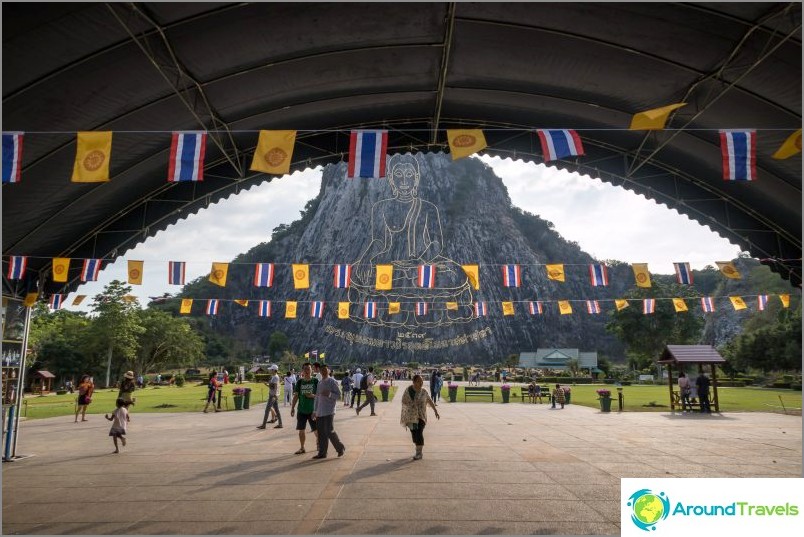 View of the mountain from the entrance 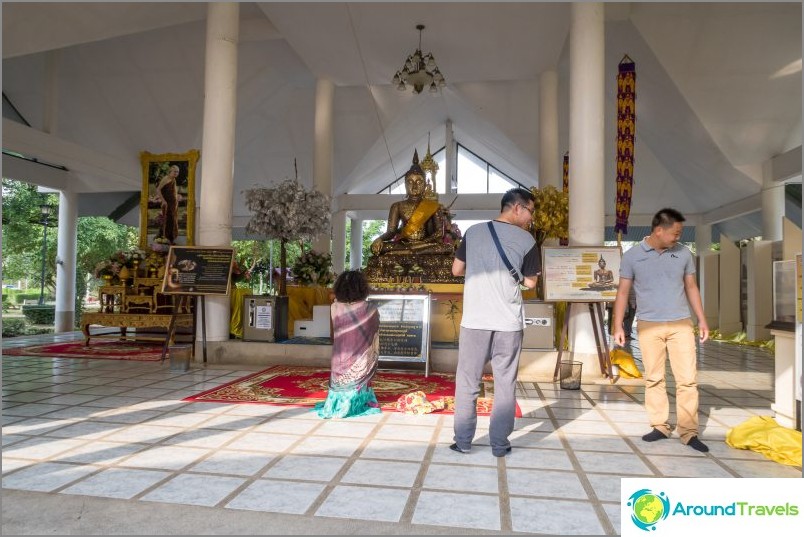 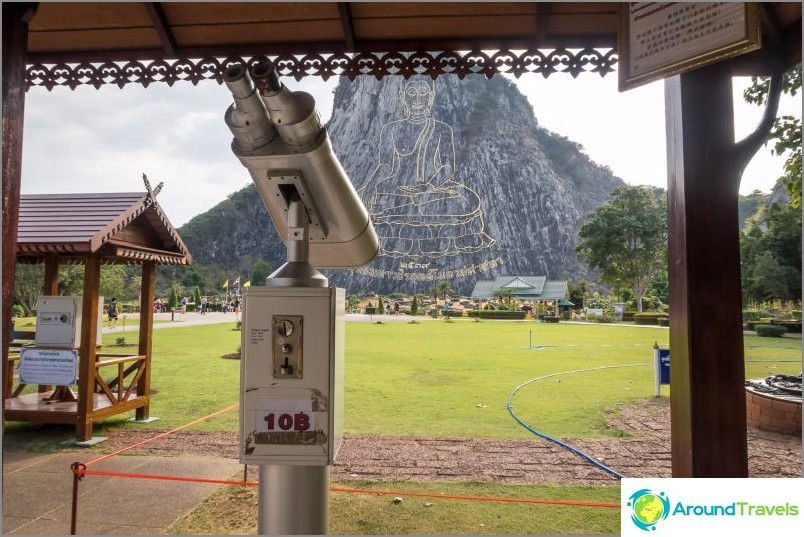 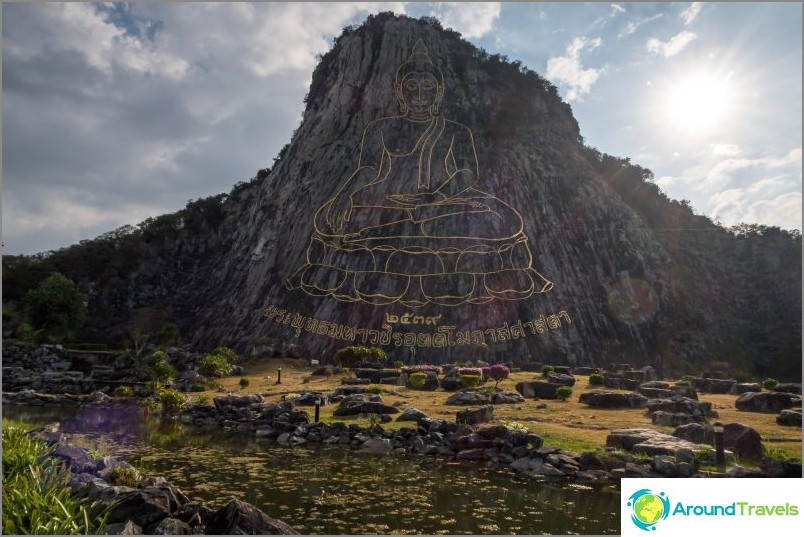 For Thais, this is primarily a religiousa place where they make pilgrimages for prayer and offering gifts. At the foot of the mountain there is a temple where you can meet monks in orange robes. Therefore, to behave here should be respectful.

True, along with the religious Thai next tothe mountain can often meet crowds of noisy Chinese tourists. But if you are lucky and the people are few, you will see a quiet and pleasant place, conducive to contemplation and thoughts about the eternal.

Before the mountain with the image of Buddha is broken a smallpark with paths and lawn. Spacious gazebos with benches are scattered around the park, and around the lawn there are flower beds, decorative stones, rope swings on the tree and binoculars, in which you can see the image closer. Close to approach it is impossible.

The mountain is quite far outside the city,about 20 km south of the city center. In the same area, one can say in the neighborhood of the mountain, there are several other interesting places that can be viewed together with a visit to Khao Chi Chan. These are the Silver Lake vineyards and the Wat Yang temple complex. On the way to the mountain, you can even stop by to see the “Inverted House” attraction, and a few kilometers further away from the mountain there is a large new Ramayana water park.

Inspection of the mountain does not take much time, even ifthoughtfully walk around the entire park, so tourists usually combine a visit to this attraction with the Wat Yan complex and (or) Silver Lake vineyards. Khao Chi Chang is included in several sightseeing tours, including free ones, which are carried out by tour operators in Pattaya. 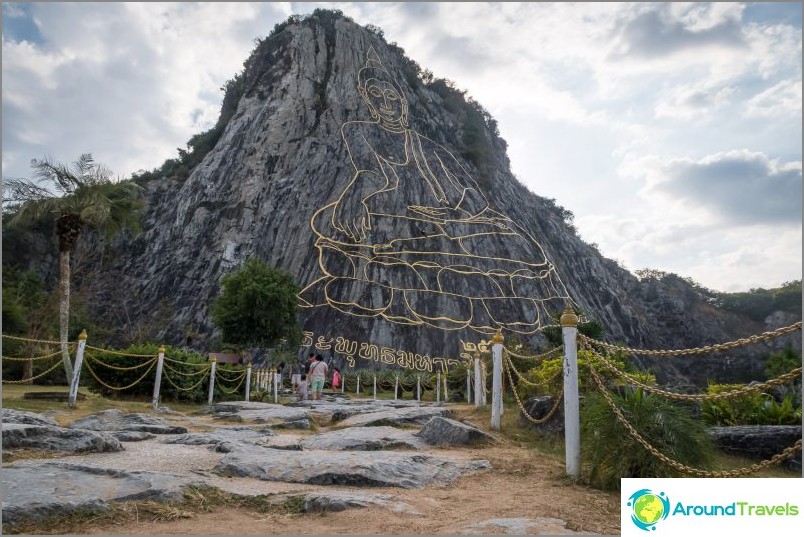 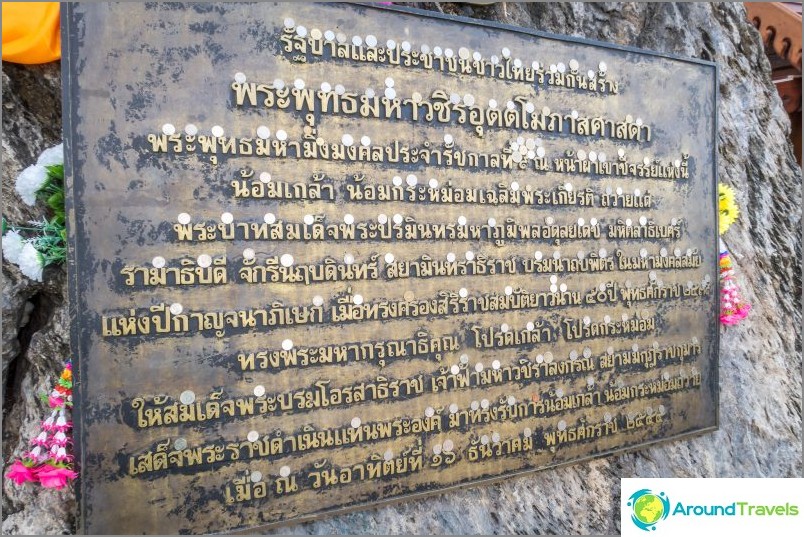 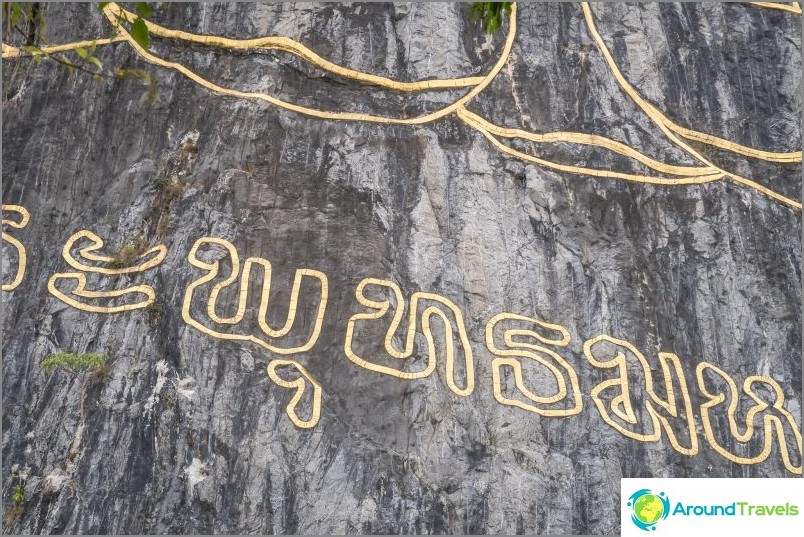 Plates on the mountain near 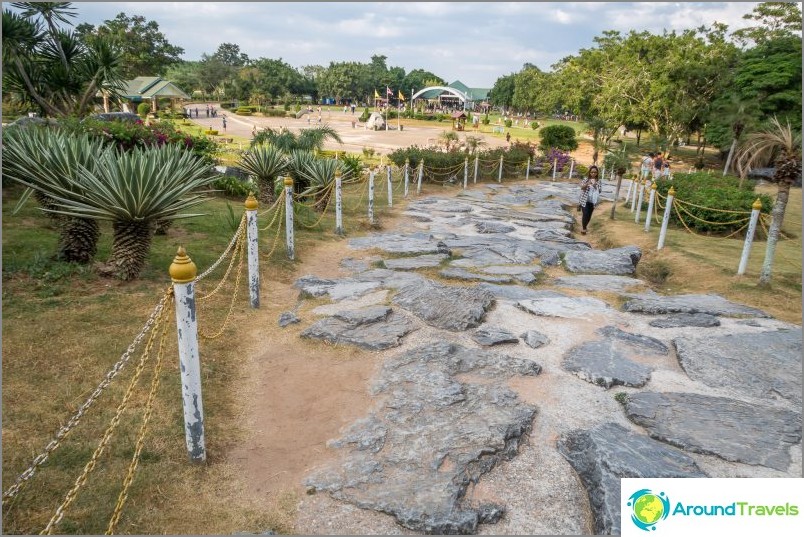 View of the park from the mountain 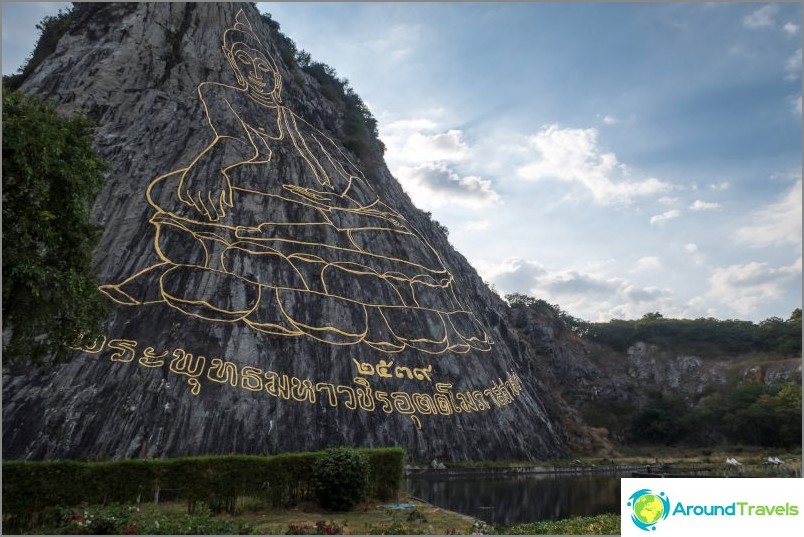 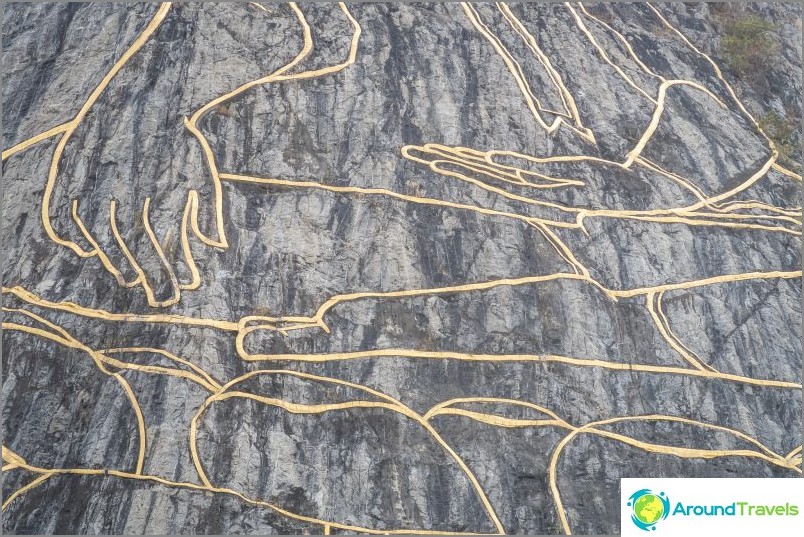 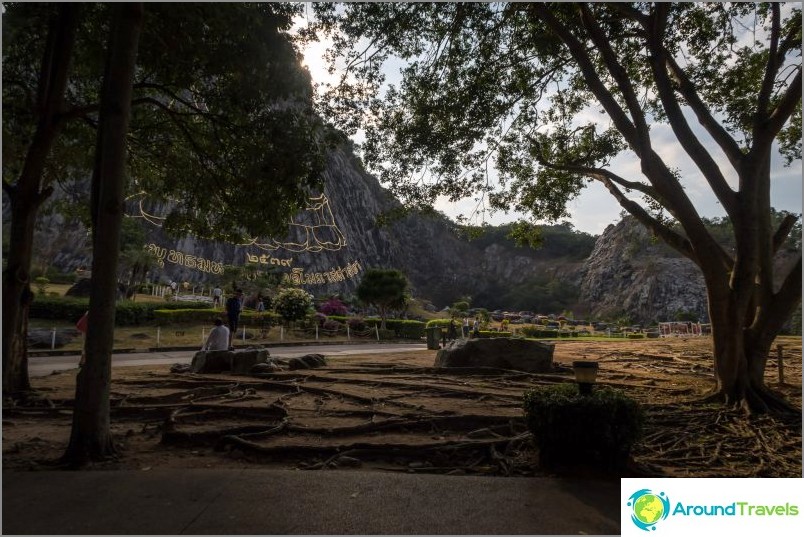 View of the mountain from the park

Cost of attendance: free of charge.

The park is officially open from 8 am to 5 pm, but, of course, the mountain itself with the image can also be viewed from the road, it towers high above the surrounding countryside. E

From the infrastructure near the mountain there is a largeparking for tourist buses, next to which shops with all sorts of things, across the street from the park - some very simple cafes with local food and toilets.

You can get to the mountain yourself, onleased transport or taxi. Just keep in mind that it is better for a taxi driver to say “Khao Chi-chan”, so that he does not confuse the place you need with the statue of the Golden Buddha on the mountain in the center of Pattaya.

Public transport in the area where it is locatedThe Golden Buddha Mountain does not walk, but you can drive along the Sukhumvit highway in the direction of Sattahiba on a white tuk-tuk for 20 baht and get off at about 160 km of the road, at the turn to Khao Chi Chan. Landmark - BMW Mini salon to the right of the road. Opposite him, across the road, is 7-eleven and a small road leaving to the left, which after 5.5 km leads to the mountain. Directly at Sevena or a little further you can find a taxi in the form of a motorcycle, a tuk-tuk or a car that will take you to the mountain for 70 baht. If you take a taxi from the center of Pattaya, it will cost much more, from 300 baht. 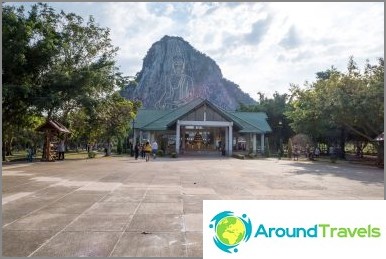 The biggest buddha image on the rock. Popular attraction in Pattaya. In more detail.

Inverted house in Pattaya - an attraction for ...