Hiking to the Crimea - Mangup-Kale and Silver Jets. Part 1

Initially we planned the Carpathians, but mostparticipants wanted to go to the sea, and the Carpathians exchanged for a hike to the Crimea. I was not upset at all and began to study the tourist routes of the Crimea. After all, I had to lead a group of people, and I was completely responsible for this event. This was my first hike, when I myself was preparing for it, and even leading people. It is good that they are all my friends, and in case of failure, they would not beat me.

Just a few days hiking routeacross the Crimea has been made. The acquaintances and the Crimean LJ community helped. A map of Crimea with tourist routes was also purchased, and downloaded to the phone with a GPS map, which later came in handy.

Our hike in the Crimea

We had a route across the mountains to the sea (according to the link route information and tipsbeginners), just like through thorns to the stars. This is a very good option to first get tired specifically, and then roll on the beach a couple of days. And here is my report on the campaign.

From the train we got off in Bakhchisarai. From here we had to get to the village of Tankovoe, where our hike began. In Bakhchisarai, we found that there is no exchanger near the station, and we do not have a single hryvnia with us. Therefore, I had to walk to the bus station, along the way finding an exchange office.

Prices in Ukraine pleasantly surprised. Food will be cheaper than in Moscow. Having tasted the Ukrainian ice cream in Tank, we hit the road. That's where the adventures began. We walked along the road marked on the map, and it took and ended. I had to wade through the thicket, through the so-called coachman, in the heat, scratching his face and hands. The people began to grumble. But after a while we were rewarded with a beautiful view from the cliff of Yuzik-Khaya to the surrounding mountains and the cave city of Mangup-Kale! Everyone gasped and realized that without difficulties we would not appreciate the beauty of this place. It was immediately decided to spend the night. 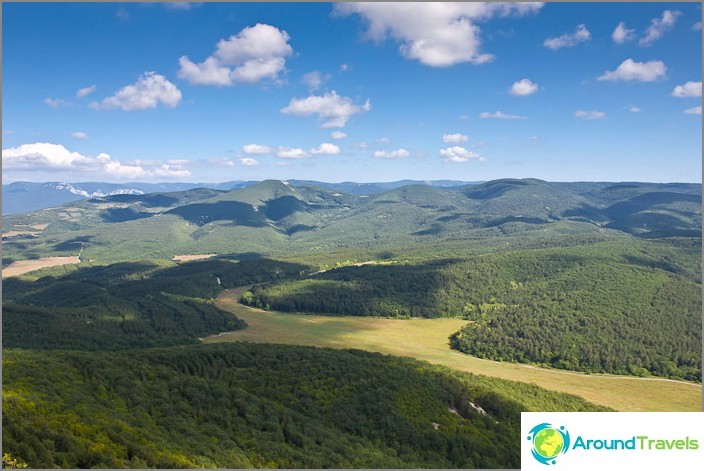 View from the cliffs of Yuzyk-Khaya. Crimea. 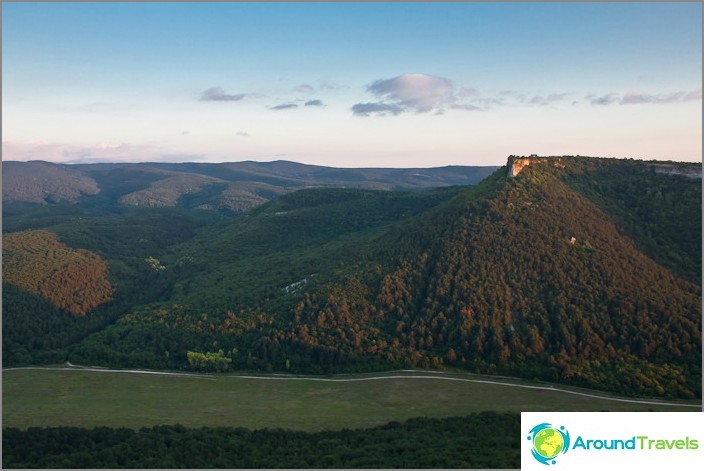 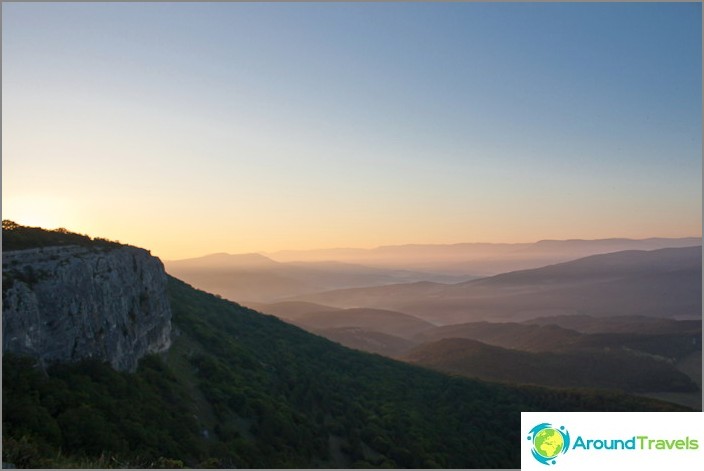 Dawn in the Crimea.

The next morning, the adventures continued - we tried to descend down to the entrance to the cave city of Mangup-Kale, and it took us a few hours, as we were again torn through the forest. 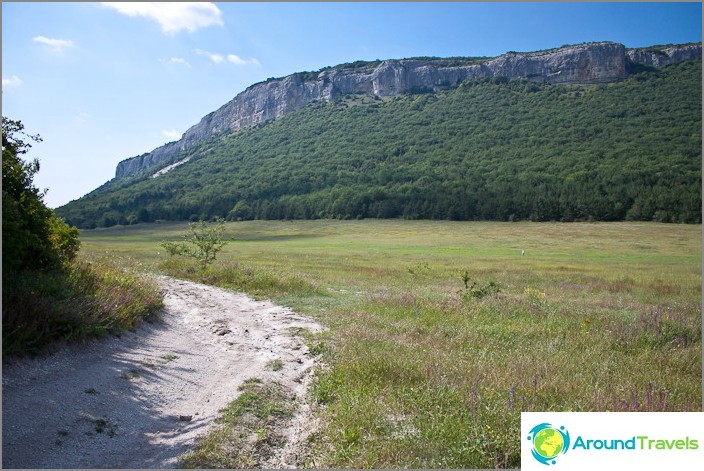 View of the cliffs of Yuzyk-Khaya. Crimea.

Downstairs we were met with open arms.the forester, at least in his crust, was so written. And he tore at us for 15 UAH (60r) per person, they say, you have to pay for moving around the forest zone (1 day - 15 UAH). Very similar to a divorce, although he showed us the paper. They did not want to get involved, the money is not big (we told him that we would go 1 day). But how pleased he was, he blossomed straight, as if he had bought a Mercedes. In the evening we climbed Mangup-Calais. Rose on the other hand, not to pay bribes. And they spent the night safely, despite the awesome posters - “the penalty for spending the night hryvnia is dead.” 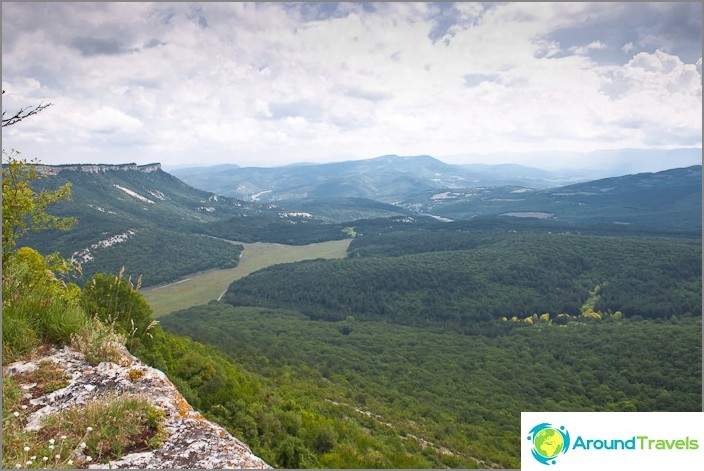 View from the cave city of Mangup-Kale. Crimea. 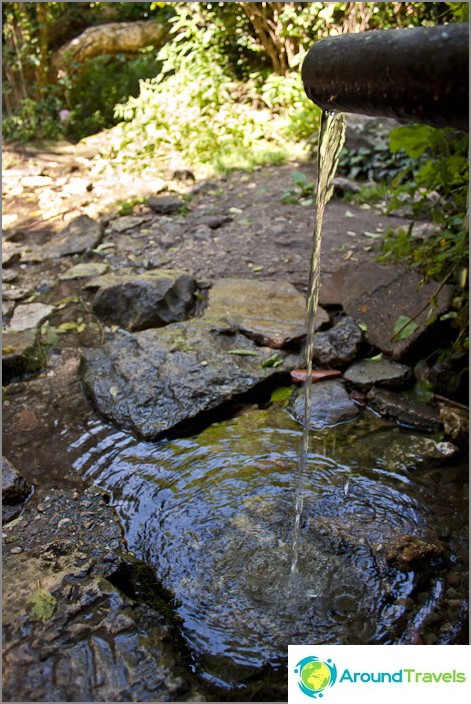 In the morning we walked through the stone apartments of the cavemen. It reminded me of all this Cappadocia. And here we were stopped by severe uncles on severe UAZ, demanding to present tickets. The guys were safely sent, and we went down and continued our trek through the Crimea. Graves in the cave city of Mangup-Kale. Crimea. 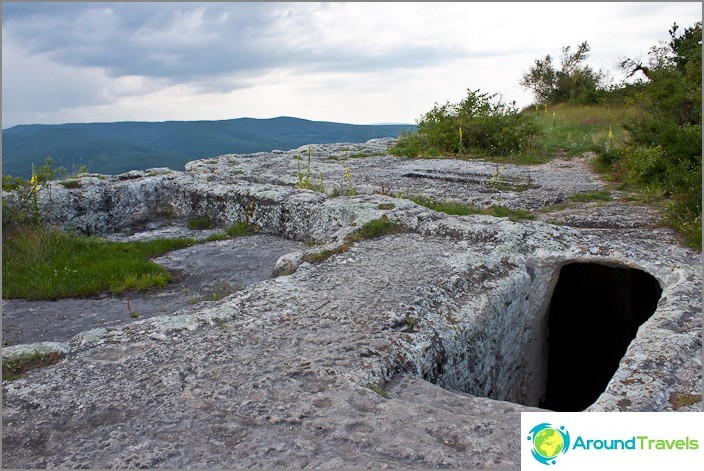 The entrance to the rooms. Mangup kale Crimea. 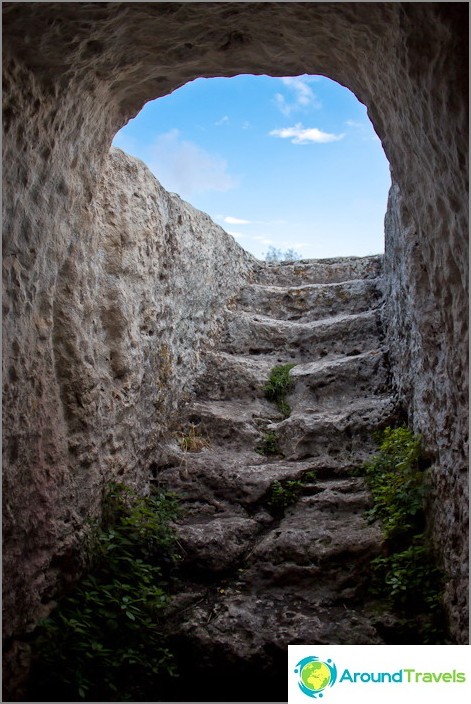 Sources passed on the third day and is not plannedspent the night on the river Suatkan, which is not far from the Rich gorge, because they were wandering again, because of the ended roads. Saved only GPS. Discontent among the masses began to grow. I could only blame the map in 1974 and regret that I did not buy a normal tourist navigator. And when the next day I took the people straight up the hill, yes through the forest, they were ready to roast me on the fire and eat, as the Indians ate Cook. My poking at the map, and the admonitions that there is a road, it just overgrown slightly, did not ride. After that, I finally concluded for myself that we would no longer follow the roads marked on this unfortunate map as dirt roads, but would only follow the tourist routes. 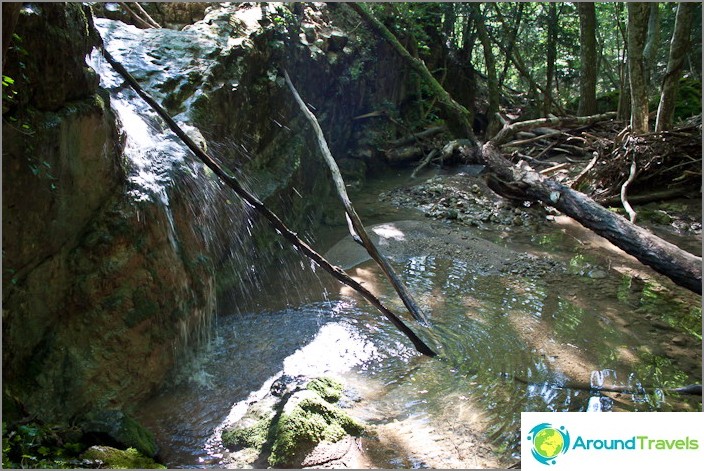 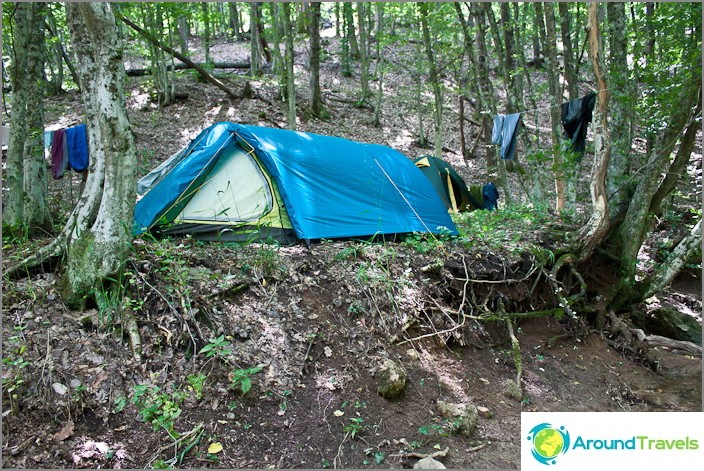 Camp near the river Suatkan. Crimea.

Out on a normal road, our squad whistlingrushed forward, only heels sparkled. It turns out that the beginners lacked only a good roadway to realize their potential. We stopped only to make some amazing photos after the Becchku Pass on the Cordon-Bair Range. 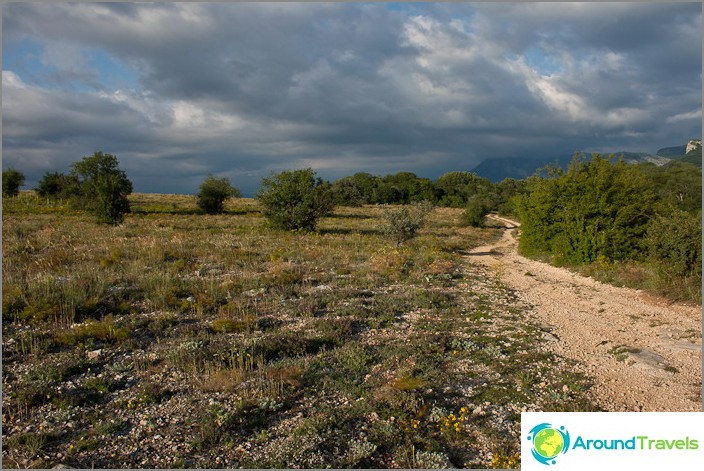 View from the ridge Cordon-Bair. Crimea. 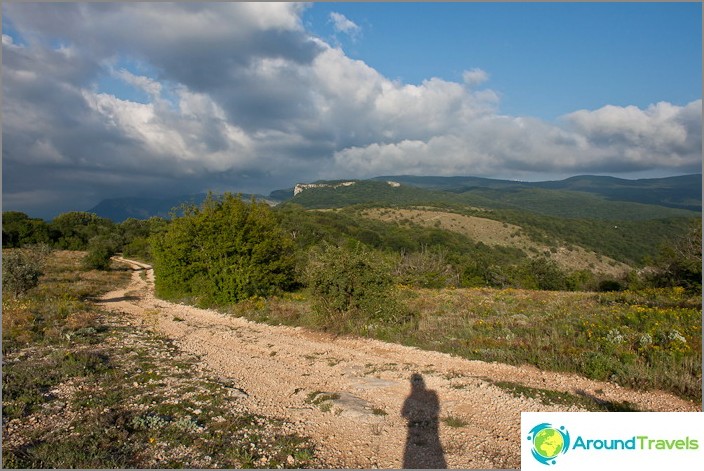 View from the ridge Cordon-Bair. Crimea.

Skipping parking Ai-Dimitri, and having satisfiedIncessant thirst at the spring, we spent the night, and not having time to get out of the reserve. And although we were very strained by the signs “for the passage through the reserve 510 UAH (2040r)”, but it was not our plans to walk in the dark. And at night there was a strong thunderstorm, and the people were worried, fearing inadvertently turning into a kebab. 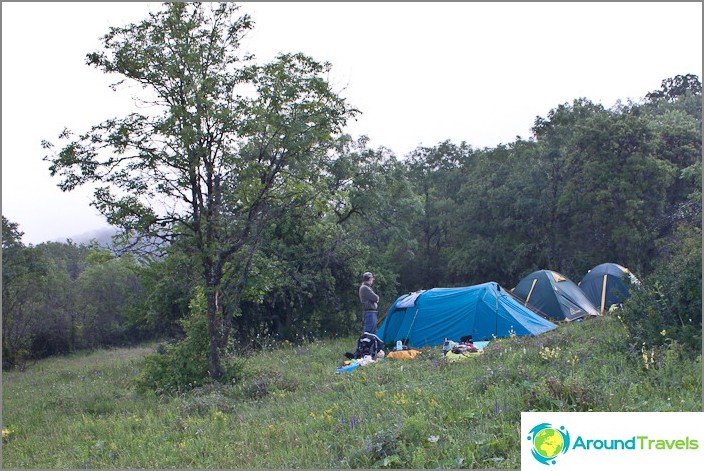 Our camp is on a slope near the Ai-Dimitriy site.

Happy about going down the road, notthe coachmen, we, bypassing the Tea House parking lot, quickly came to the Silver Jets waterfall (he was still then). How beautiful it is there! Such awesome day we were there, with a swim. And the waterfall really consisted of cascades of silver streams. 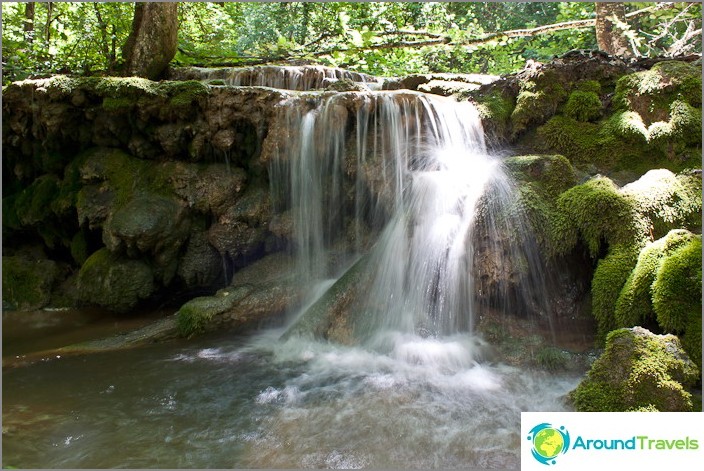 Near the waterfall Silver Jets 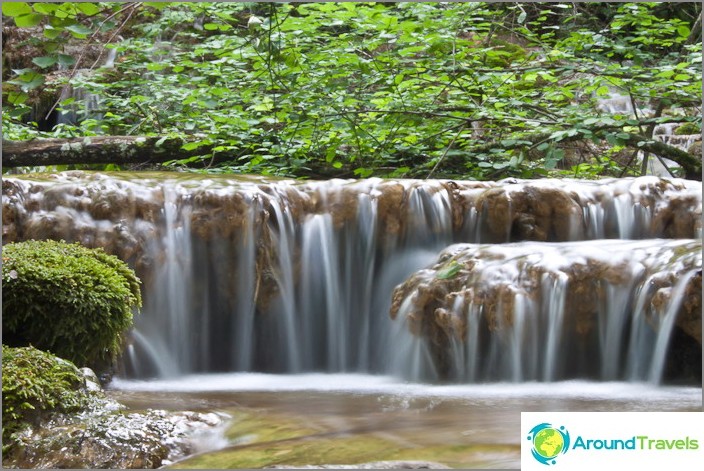 Near the waterfall Silver Jets in Crimea

P.S. What happened then? And then there was Grand Canyon of Crimea.

Hiking - Grand Canyon of Crimea and ...

Vegetarian and non-alcoholic wedding - budget and ...