In the first part of the campaign report, I told how we went Mangup Kale and Waterfall Silver Jets. And now I will tell you how we conquered the Grand Canyon of Crimea and Ai-Petri.

One of the members of our expeditionleg has ached, and therefore the Grand Canyon of Crimea, it was decided to pass on horseback, and not the bottom. Remembering that recently, I was almost dismissed from my position as a conductor, I did not insist on the opposite, and even tried to put him off to the sea. But the participant was firm and, heroically overcoming the pain, overcame all the difficulties of the mountain trip.

Hiking in the Crimea (continued)

Not to pay a bribe for the entrance to the Grand CanyonCrimea, we spent the night just before entering it. And from the morning, not seen by anyone, reached the Blue Lake, having performed another bath. The absence of people and the morning silence created an atmosphere of privacy and a sense of being in the wild. 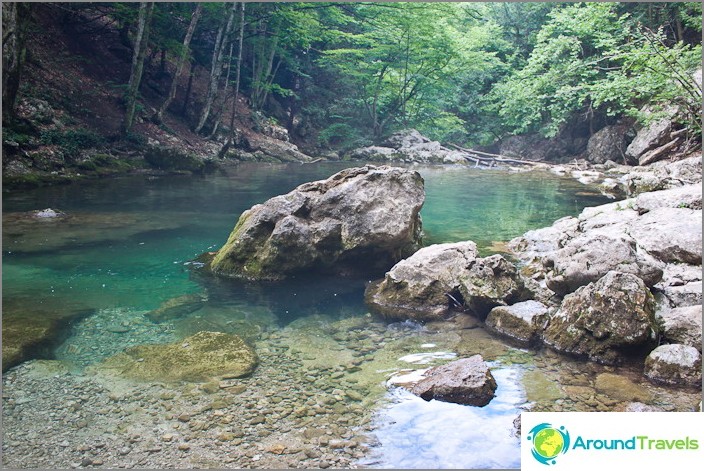 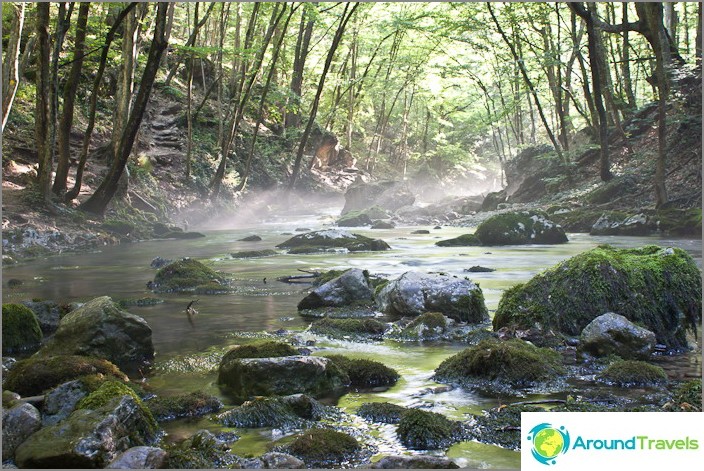 The Grand Canyon of Crimea at the very beginning.

After swimming, we climbed a narrow path, gritting our teeth to the very top. And here the very beauty began there, for the sake of which hiking tours are started! 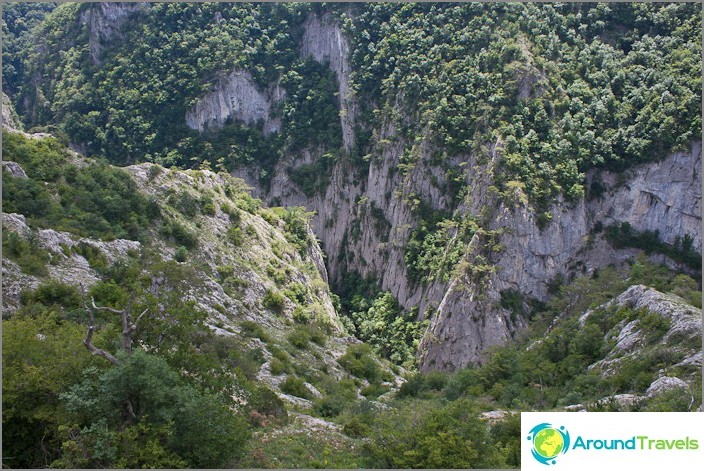 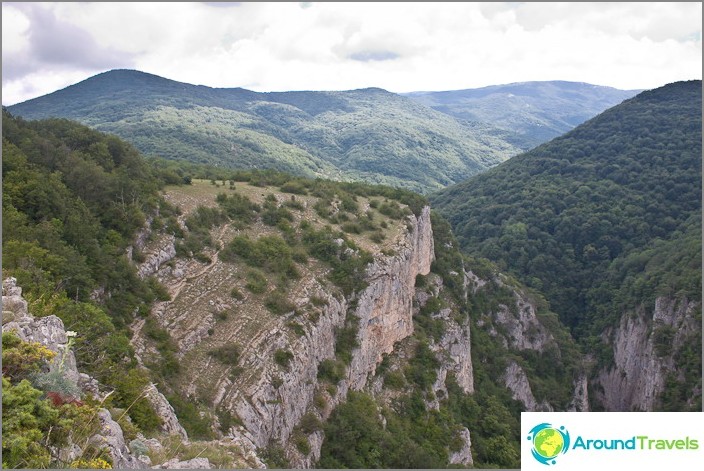 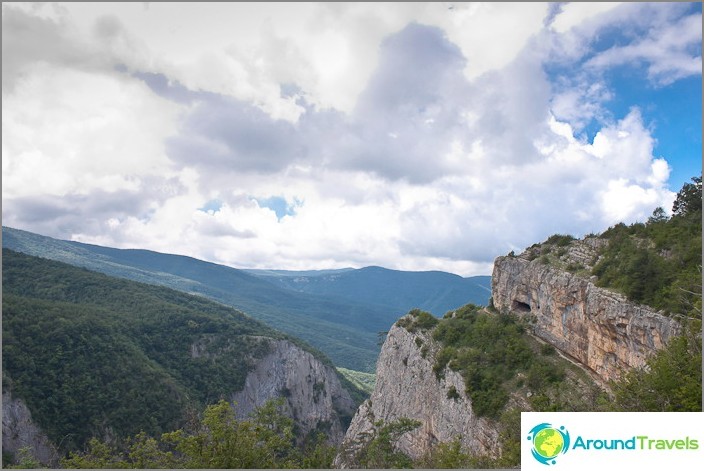 The Grand Canyon of Crimea and the Cow Grotto. 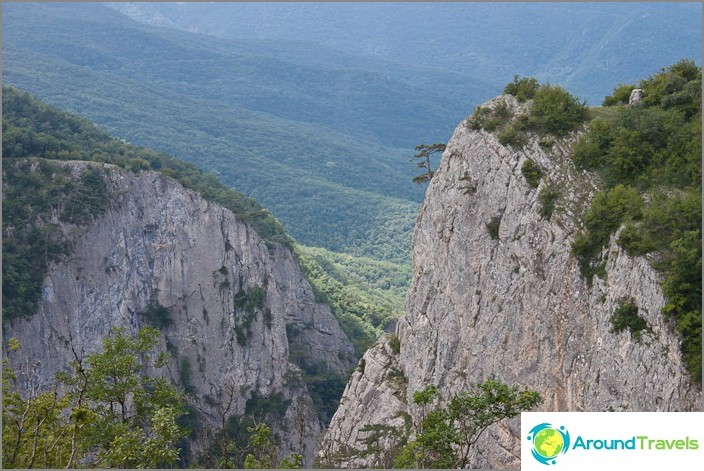 Stomping a couple of hours along the top of the Grand CanyonCrimea and passing tourist camp Boyka, we went down the gorge to the river, in order to at least a little taste of the charm of the stone walls. After what I saw, I wanted to come here again to still go this route down. 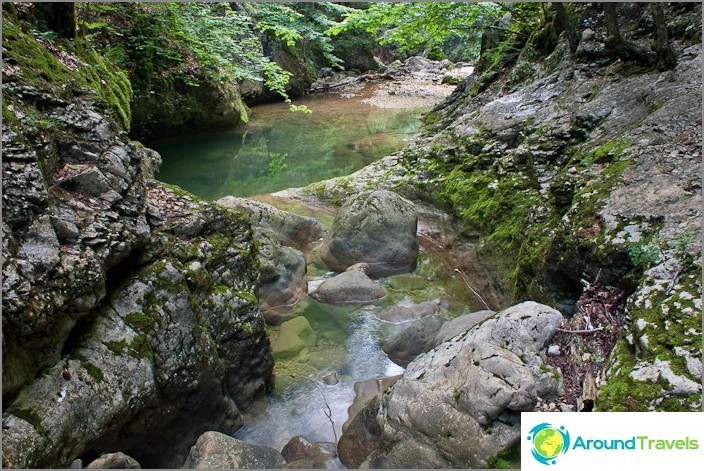 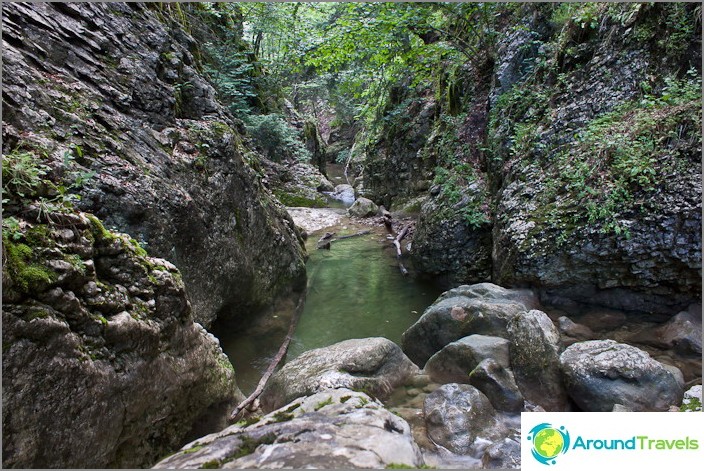 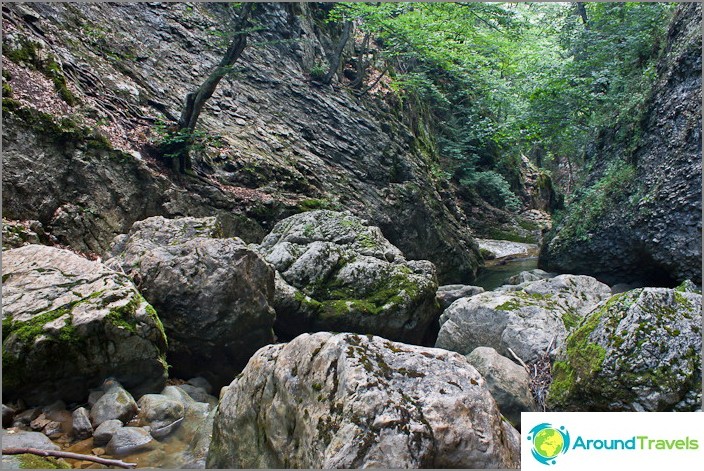 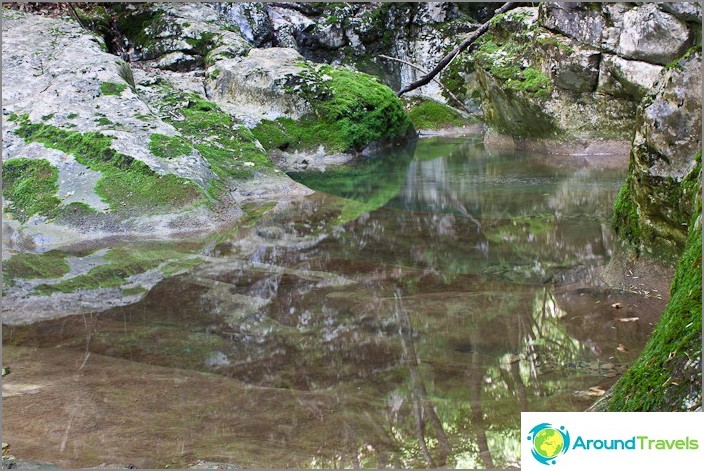 A detailed description of how to get to this place without being on a hike (although it would be useful for hikers), as well as other photos, I posted here - Grand Canyon of Crimea how to get.

After spending the night in the parking lot of Bash-Dere, the next day we went up through the mountains of Queen-Tele and Blachag to Yalta plateau. Most of all I liked the observatory balls on the mountain and the bright yellow straw field. 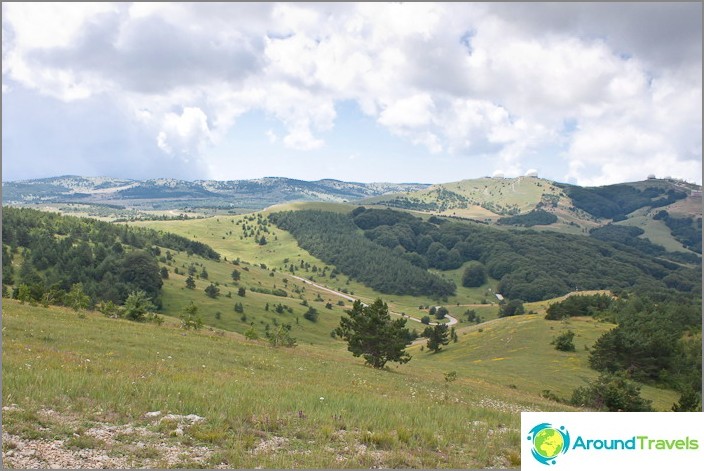 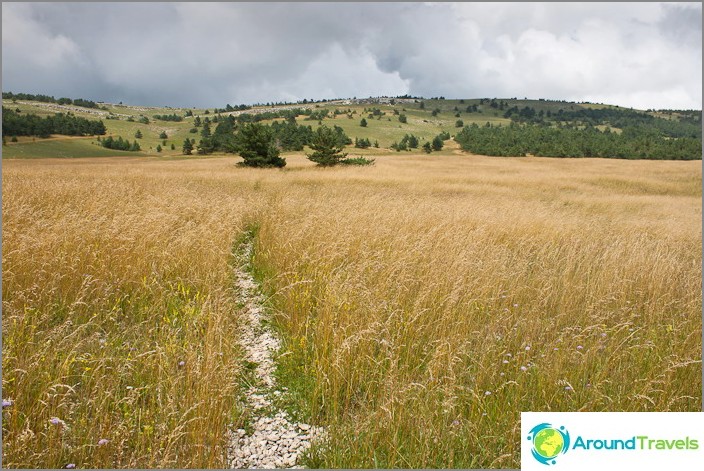 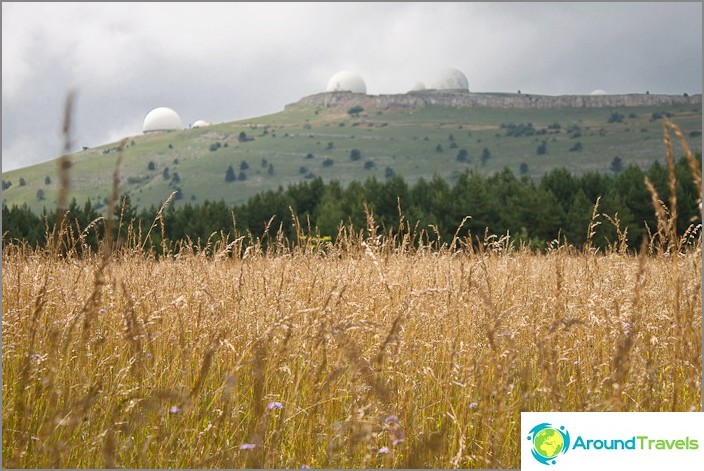 When we ended up on Ay-Petrinskaya Yail, wealso turned out to be in the clouds. We tried to admire the views of the sea and Yalta from the observation deck on Ai-Petri. Well, as far as possible, since these were only moments when the wind threw the clouds to the sides. 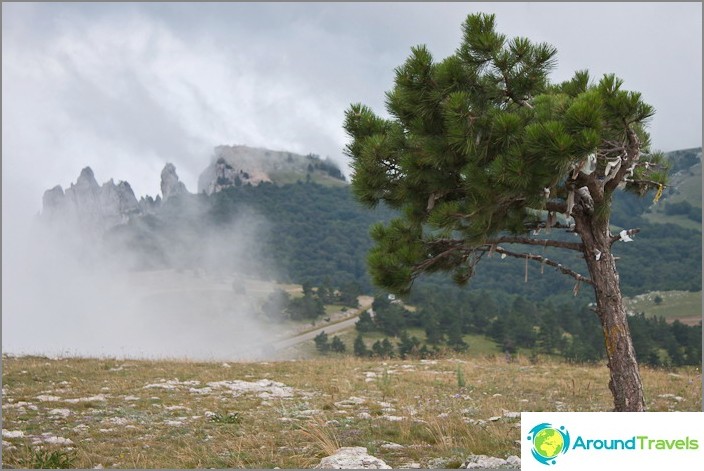 Ay-petrinskaya Yayla. In the clouds. 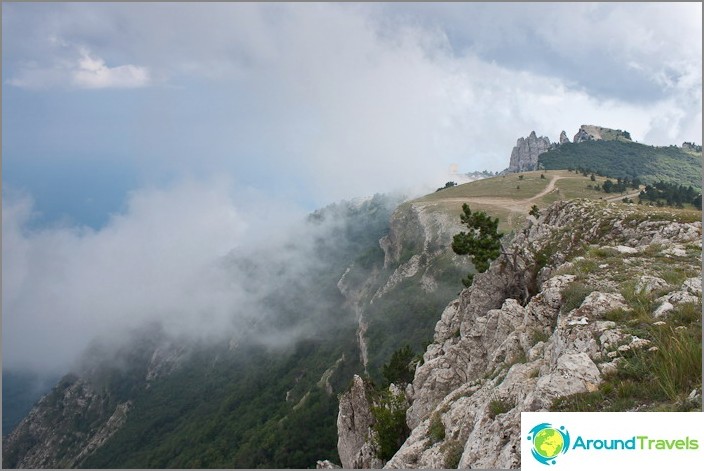 Mount Ai-Petri in the background. 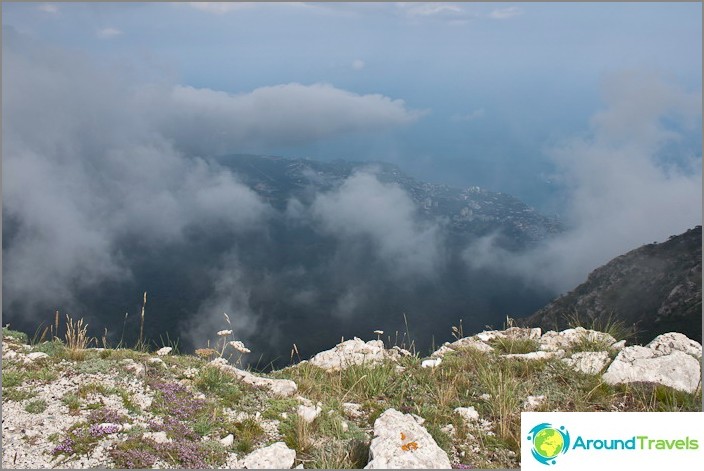 Unfortunately, our idea is to go down the cable car.the road to Ai-Petri was not realized. Probably all of Ukraine, and Russia in addition, lined up at this attraction. And at best, pressed against the misted glass, and at worst, fifty other people, sandwiched, seeing only the wet backs of them, instead of the surrounding mountains, seemed a bit silly to us at that time, considering that the cost of the cable car to Ai-Petri is 50 UAH ( 200r) But with a breeze, in a half-empty bus, we reached Yalta in an hour. What was there serpentine, still nauseated from the memories. 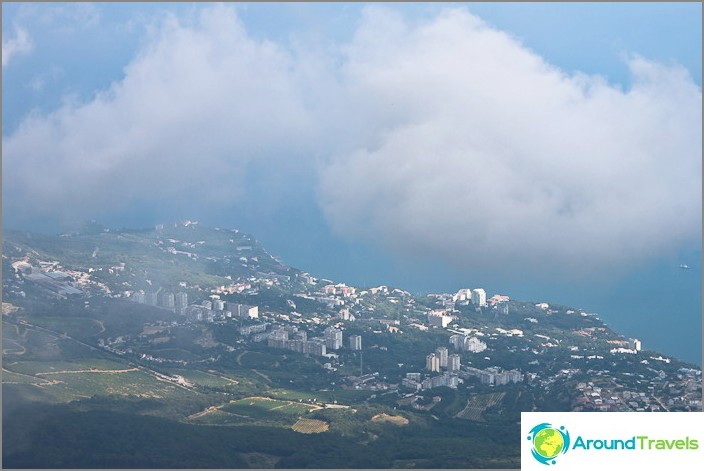 Yalta in the clouds. Crimea.

As a result, we passed this tourist route.across the mountains to the sea, overcoming about 50 km, in 7 days, although initially they planned a 5-day hike. But I think for us, beginners, this is quite good, considering that we were not in a hurry and did not try to set records, went, so to speak, into a high.

I will not hide, I was just glad at the extra unplanned day in the mountains, because I didn’t want to go to the sea at all. Shh! Just do not tell anyone, and then they will think that I specifically drove them through the wilds.

The only thing that bothered me, and not only me, is ignorance of when the next spring will be. Yes, they were displayed on the map, but we did not know when we would be there. Compared with Altai MountainsCrimea is a dry place.

P.S. If you go hiking in the Crimea on your own, I recommend to buy a normal GPS. My built-in phone worked for only a few hours on a permanent basis, and this was not enough.

Awesome places in Thailand for 4 days ...

Hiking to the Crimea - Mangup-Kale ...