Hiking without equipment and food on Mount Semiglavaya

In the new year found some kind of lyrical moodand flooded memories. Until now, my first acquaintance with the mountains and my first tourist trip is vividly remembered, if, of course, it can be called such. Rather, it was more like a walk. I have long wanted to write about it, but it was not all leisure. By chance, we wandered in the composition of three people (I, my friend and our girlfriend) on Mount Semiglavaya (1500 m), being without equipment and food, but in rubber slippers

A little background - in 2005 we lived with a friend in all summer in a tent on the river Jean that in the village of Renaissance. Then this place was completely different, now II could hardly live there for a long time, but this is another story. So, we wanted to adventure, not all the same to sit in one place. And we went wherever our eyes looked, leaving all our belongings with the tent in the Renaissance, taking with me only skins, sleeping bags and a couple of warm clothes (summer is what else is needed).

I apologize for the quality of the photo, then SLRs were unknown to us, and the film soap box with 36 frames was like the height of progress.

We went on the road to catch the car. The direction of the trip, outlined only on the way - in the direction of Adygea. By the middle of the day, the hitchhiking led us to the village of Anastasievka, where the dolmens should have been located. Having stumbled upon an apple orchard, we gathered a kilogram of 5 sour apples, not knowing yet that the next days we would be doomed to an apple diet. After all, initially, we just wanted to look at the dolmens, then stock up on products in the store and go further towards Adygea. But here we met a group of children-walkers with an instructor, who, instead of telling us about the location of the dolmens, told about the proximity of Mount Semiglavaya, where our “mobile group” can get in just half a day. Only later did we realize that he overestimated our “mobility”.

Lech demonstrates that he can not only carry a backpack, but also me 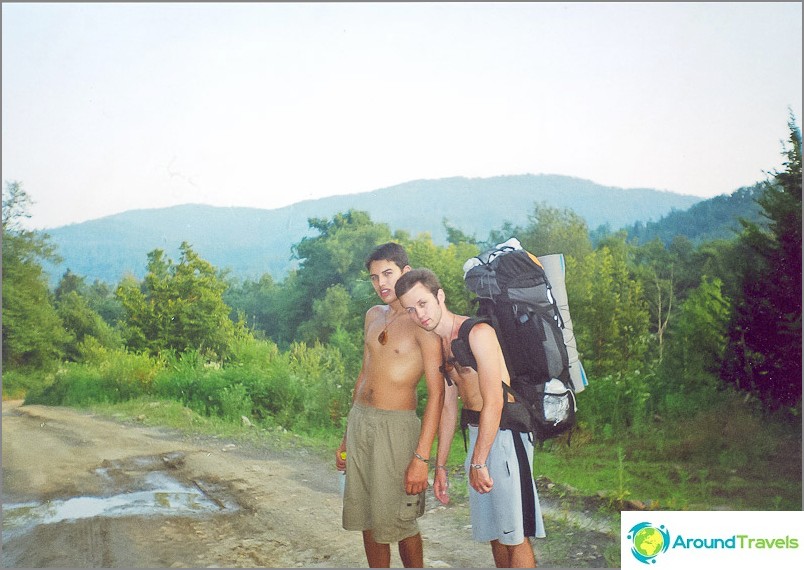 They did not yet know about the three days of the journey.

What the hell dolmens when here you can kissclimb the top! - We thought and, stamping on the dirt road with rubber slippers, went upstairs. Then Semiglavaya mountain seemed to us similar to Everest, because in the stone jungles of Moscow, besides escalators in the subway there is nothing more to conquer. When it got dark, they decided to try to spend the night at the lumberjacks, whose village was on the way, because they did not want to spend the night without a tent. We were accepted, treated with compote with black bread, as we refused some kind of stew (we were already vegetarian), and even offered a bed, but the situation inside the house was such that tourist foam was nicer to us. Then for the first time I believed in people who can help, having almost nothing themselves. There is no limit to joy 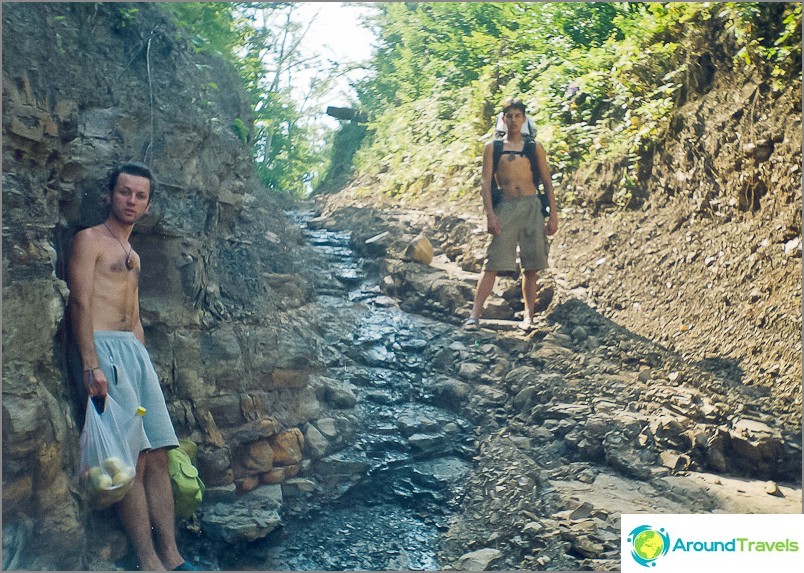 Walkers - in spanking and with a pack of apples 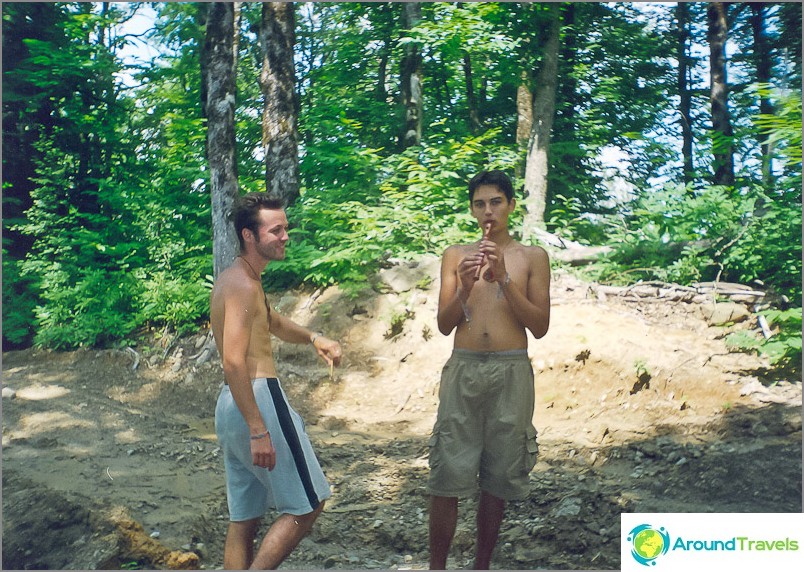 Only by the middle of the next day we went toAlpine meadows to the desired peak, where a stunning view would be if it were not for the clouds. However, even what we saw amazed the eyes of unprepared Muscovites. We have not seen such mountain landscapes yet. By the way, our “mobile group” was constantly losing the path and was waiting for a group of children for another clue. Also, our speed was hampered by picking and eating blackberries, raspberries, cherry plums and other edible things that come along the way. So at the very top, we came along with a tourist group, no less tired, but satisfied. 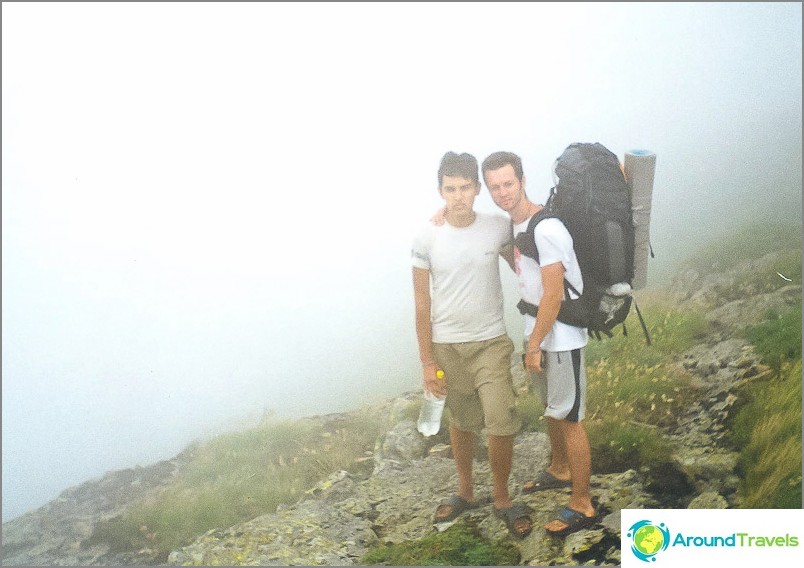 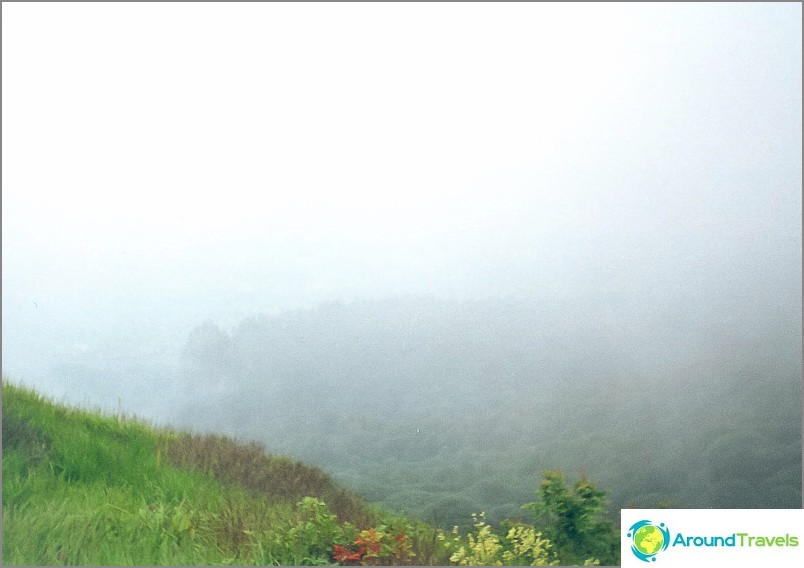 All in the clouds 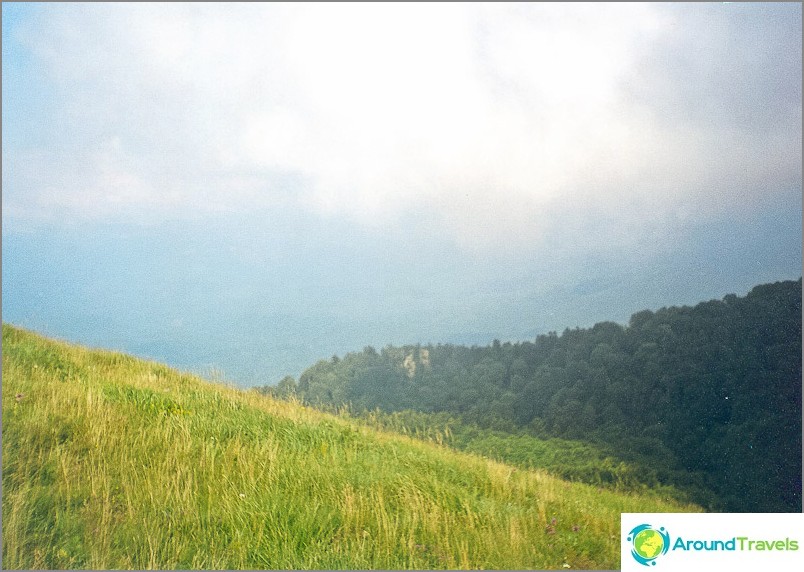 Occasionally through the gaps you can see what is below 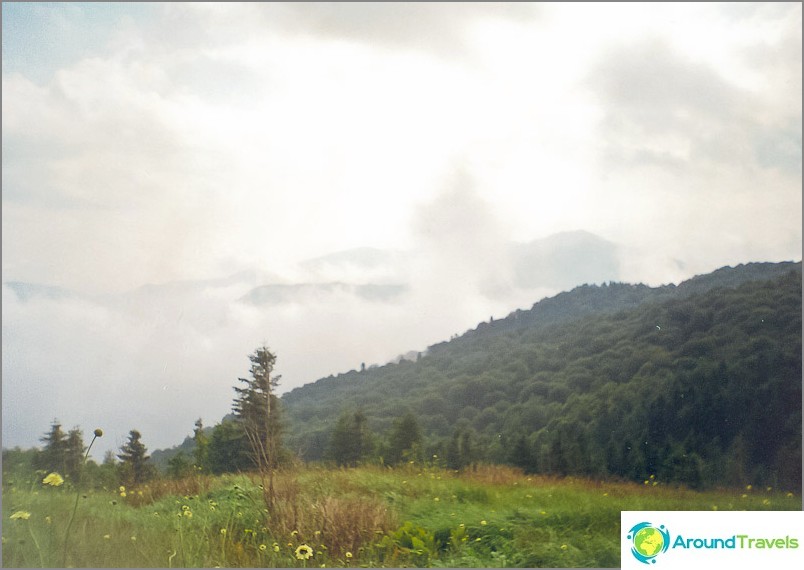 Everything is covered with clouds 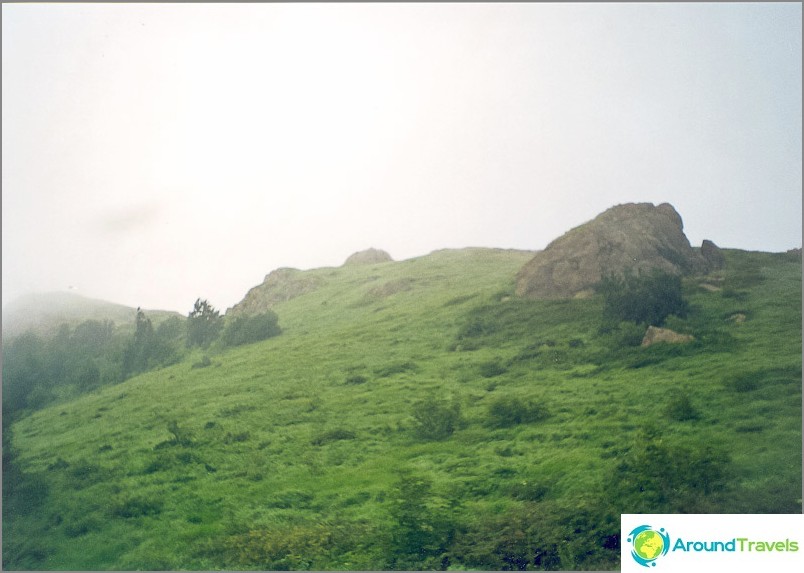 There are rocks sticking up everywhere.

Instead of just going backwards, weonce again they were led to the assurances of the conductor that he would go down to another village (Big Pseushko) easier and faster, and went further along with the children along the ridge. That is why he didn’t tell us that it will be cold at night, and that it’s more to go? Probably, he saw greater potential in us and did not know at all what brought us here by chance and without equipment, although our beachwear and one small backpack said the opposite. 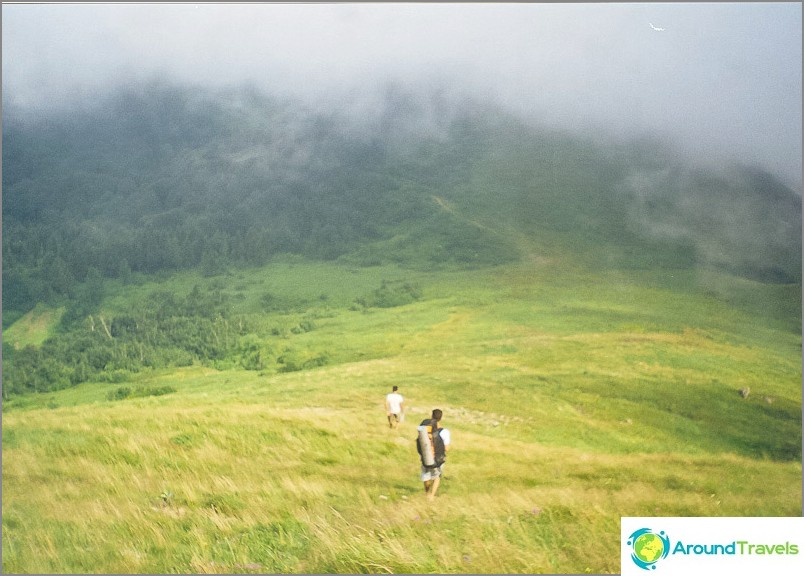 We go along the ridge to the mountain shelter for the night.

In the morning, unable to endure hunger and a little shy,we asked the instructor for a half-brick of black bread, which disappeared in an instant, dissolving in the mouth, and leaving memories of the most delicious bread on the planet. Apples, by that moment, we just hated, and there were only a couple of them left. 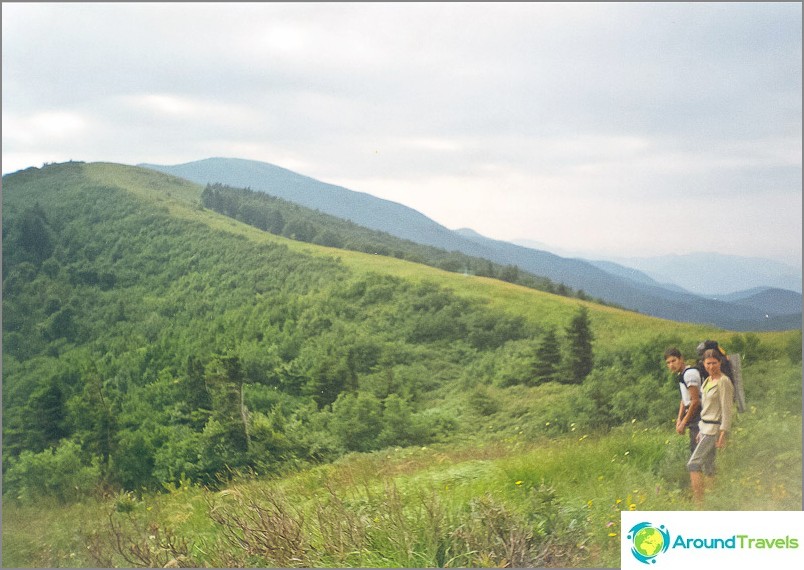 We go along the ridge and look for the path down 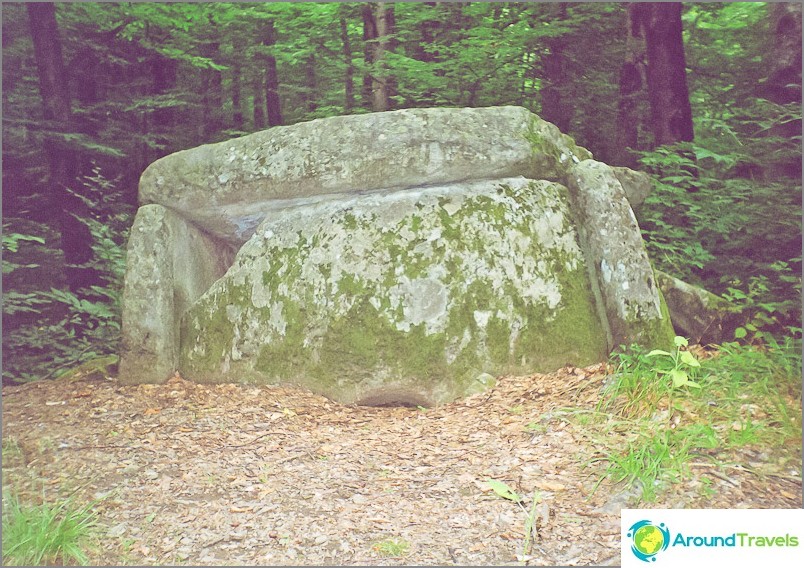 Dolmen ingrown into the ground and slipping into a precipice

Only at the end of the third day, we went out tolong-awaited Big Pseushko. This day was full of events: conversations about the meaning of life and our campaign, meeting with a snake, which we barely stepped on, checking mushrooms for taste and edibility, bathing in an icy river, huhings and breaths about majestic beeches piercing the sky and pushing the clouds onto their peaks. In Bolshoy Pseushko, we first rushed to the store, but, as it should be in normal villages, it was already closed. Then we turned to the local people for milk and they gave it to us, refusing to take the money. Then the second time I believed in people. And further by bus in Tuapse, overnight on the beach, Sochi arboretum ... 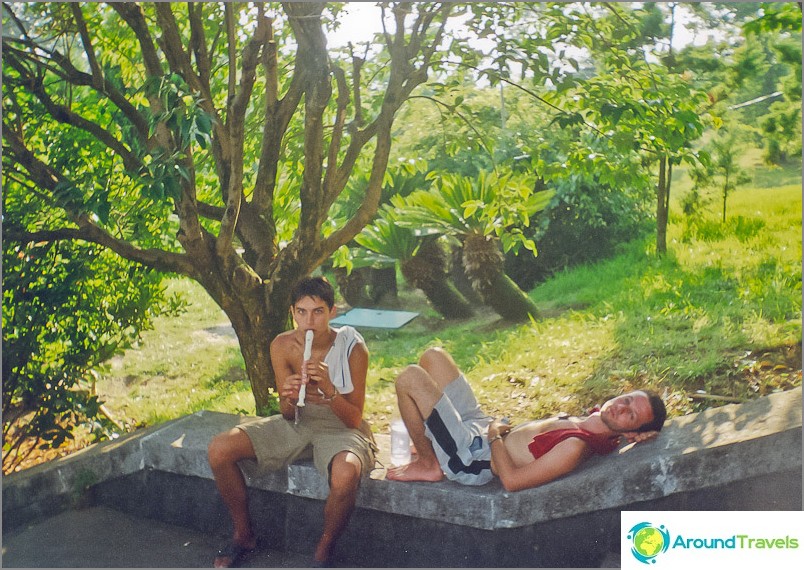 Instead of Adygea, we went to the arboretum in Sochi

So, with minimal equipment and without food, wewent to Mount Semiglavaya and visited at an altitude of 1500 meters. Now all this is remembered with a laugh about our unpreparedness, however it evokes the thought that there would be a desire, an opportunity will be found. And now such a list of things / cases for the implementation of the trip sometimes arises that you wonder

Wedding abroad in the summer