Home>New articles>Hin Lad Waterfall on Samui: the path through the jungle + secret place

Hin Lad Waterfall on Samui: the path through the jungle + secret place

During rainy season on samui good to visit various waterfalls. These days you can see more powerful and beautiful streams of water than during normal times. And also you can even see some waterfalls that dry up and are a pitiful sight.

Of course, you should not wait for the greatness of Niagara Falls from the waterfalls on Samui, and you should not even compare them with those that I saw in the north in Kamphaeng Phet (100m) and on Doi inthanon (280m). But I was just going to walk to the Hin Lad waterfall just a long time ago. Therefore, I chose a “window” when the sun looked out after several days of torrential rains threatening to go to the global flood.

Hin Lad Waterfall (Hin Lad) is small, and here itselfThe essence is not so much in a waterfall, as in a walk through the jungle. This is a great opportunity to stay in silence, swim in the cool water, enjoy nature. But it is worth considering that it takes about 30-40 minutes to walk through the forest and upwardly to the waterfall, which is not a rest for everyone. Do not forget about the heat, which does not add lightness to this event. I got there in about 20 minutes, and back even faster, but it was almost a run.

At the very beginning near the road, there is a backwater with fish(you can feed) and arbor. If we go along the bridge over the river, we will see the Thai temple. It differs from others in a certain modernity and white color. But perhaps the feeling of "modernity" appears only because of the novelty of buildings and brilliant metal handrails at the bridges-roads surrounding the buildings. 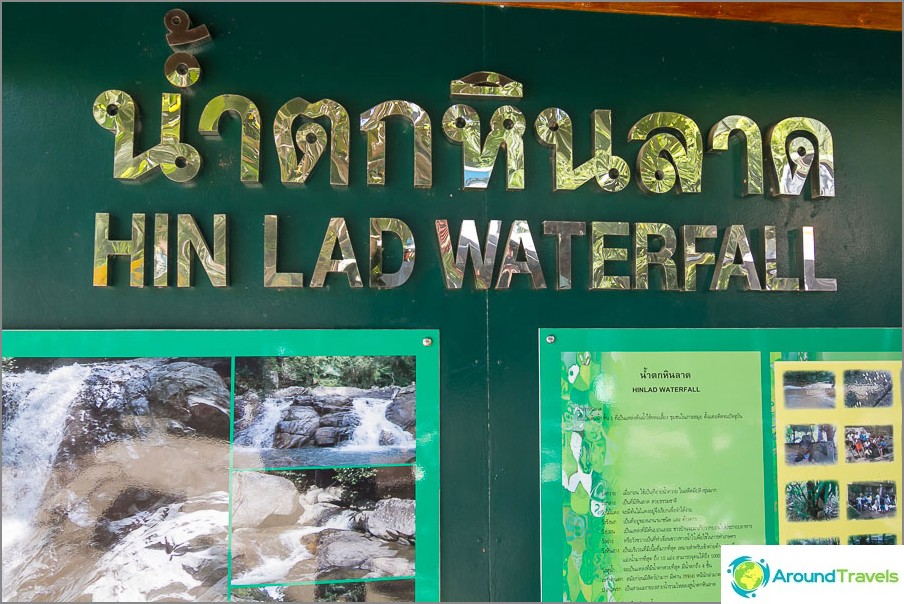 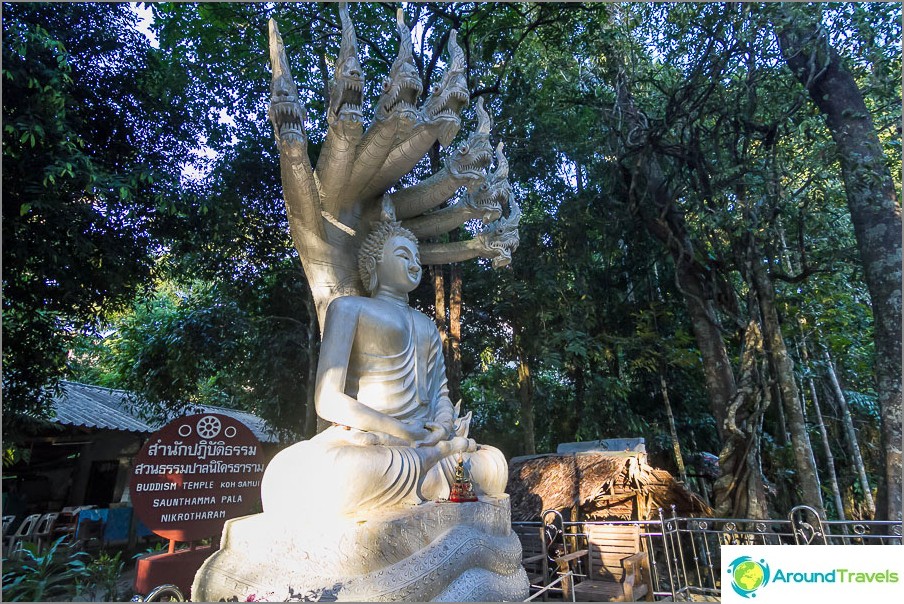 Buddha statue near the temple 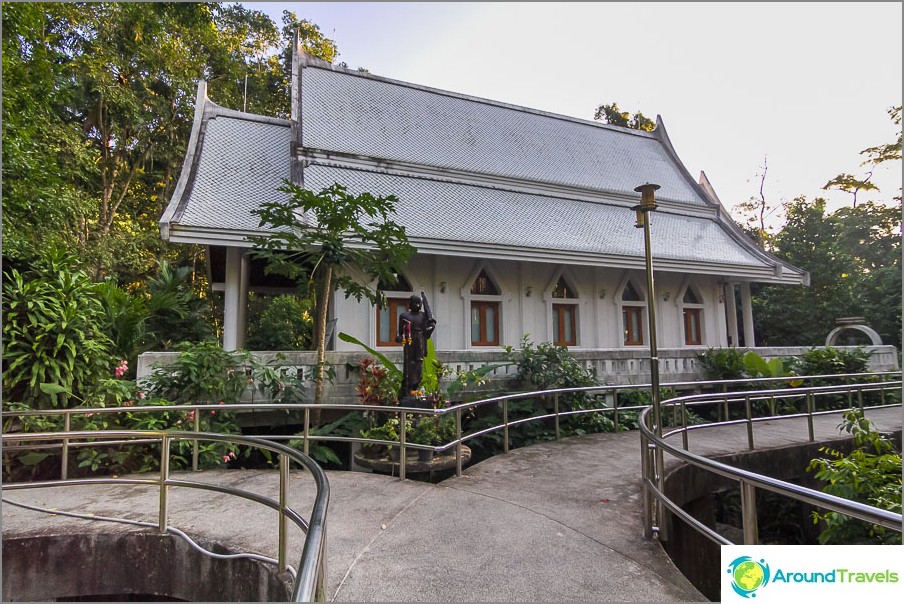 The temple is surrounded by bridges and shiny handrails 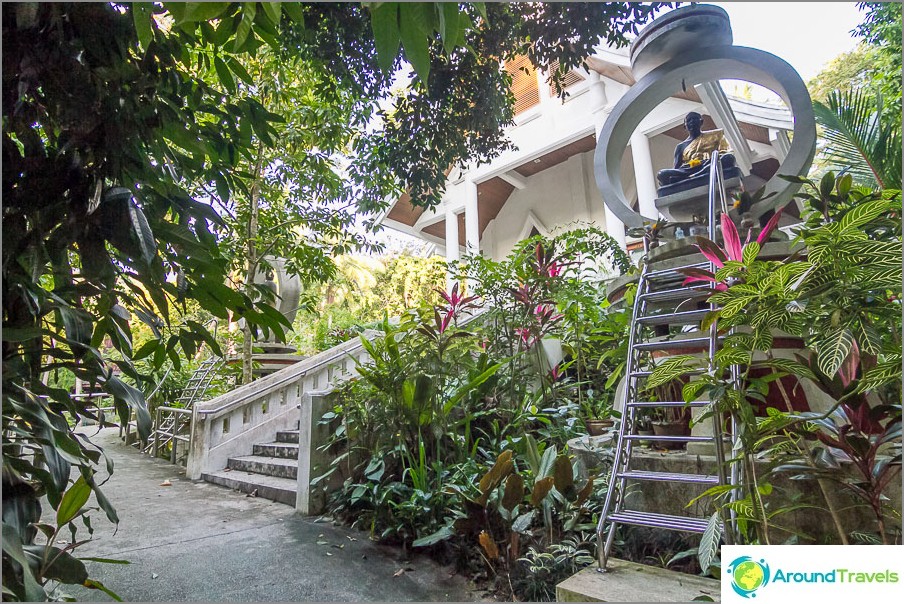 The territory of the temple

No need to go along the riverbed to the waterfall

If you need to waterfall, then go to the right ofgazebos and climb the stairs (there will be a pointer). I made a little mistake and first went along the river bed, this is not a good idea, because I had to walk a few hours. 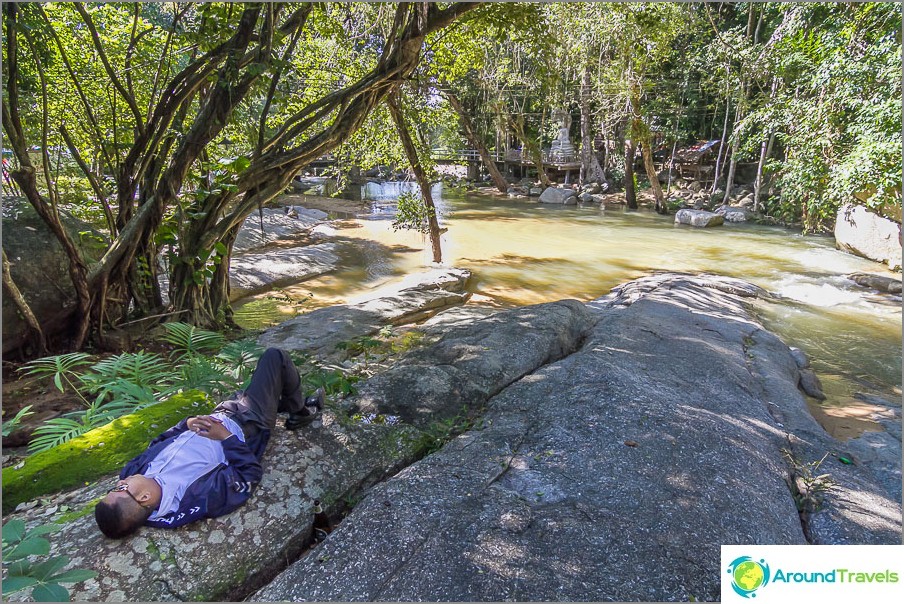 Well here so after work lie down 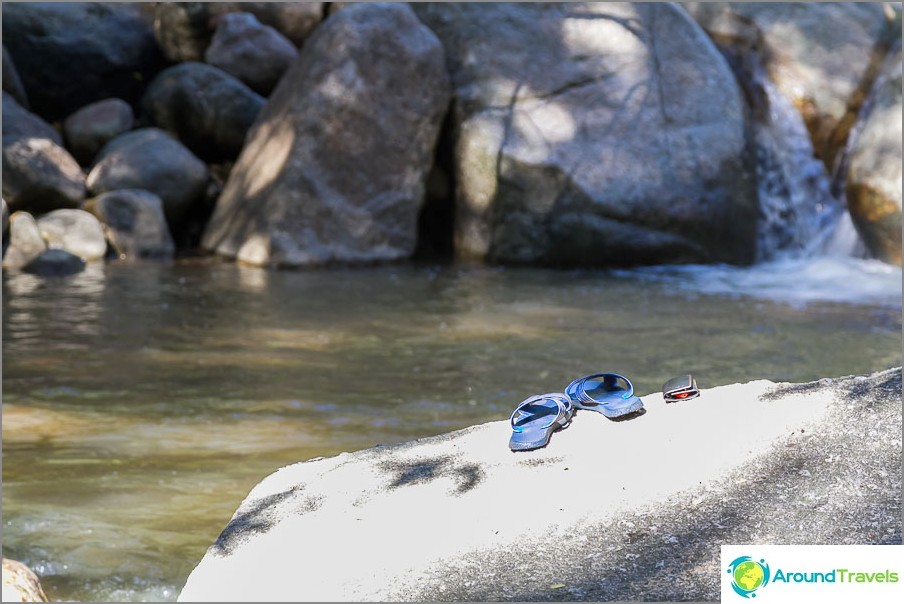 Who is the first, that and sneakers 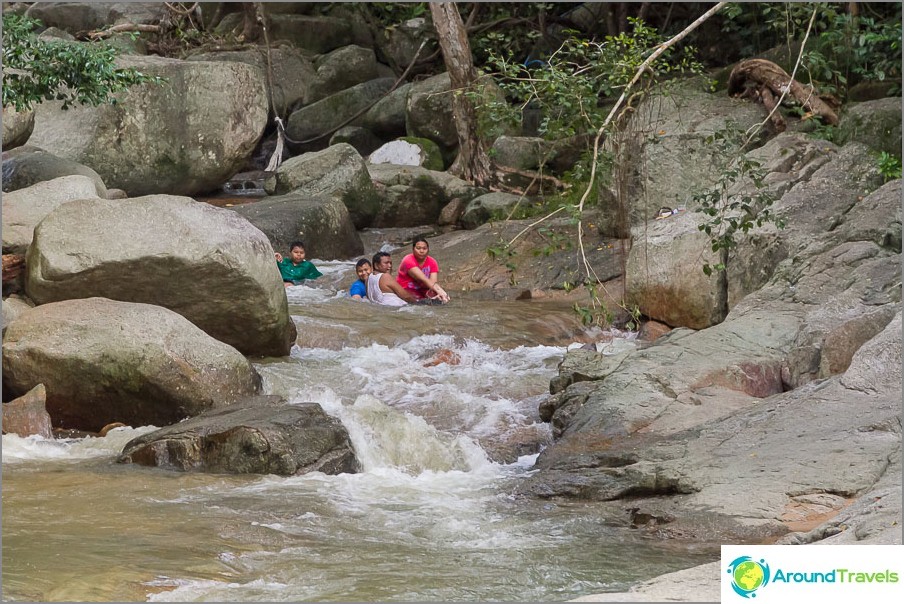 Way to the waterfall

Realizing that along the channel I will not get there in the evening, Iwent back to the very beginning to the first pointer. Looking around, I saw the stairs. Having given a symbolic 5 baht to the donation box and climbed the stairs, I got into the real jungle. The path forks several times, but it seemed to me that all the ways still converge and go in parallel. In any case, it is worth adhering to the river and walk along it. Along the way you will find trees with huge roots, creepers, palm trees, dense tropical vegetation. Many more reports have been said about spiders, snakes and lizards, but I have not met anyone! But I didn’t really want this, and therefore, after reading horror stories, I walked intently at my feet and shying away from each branch, suddenly there is a poisonous spider. 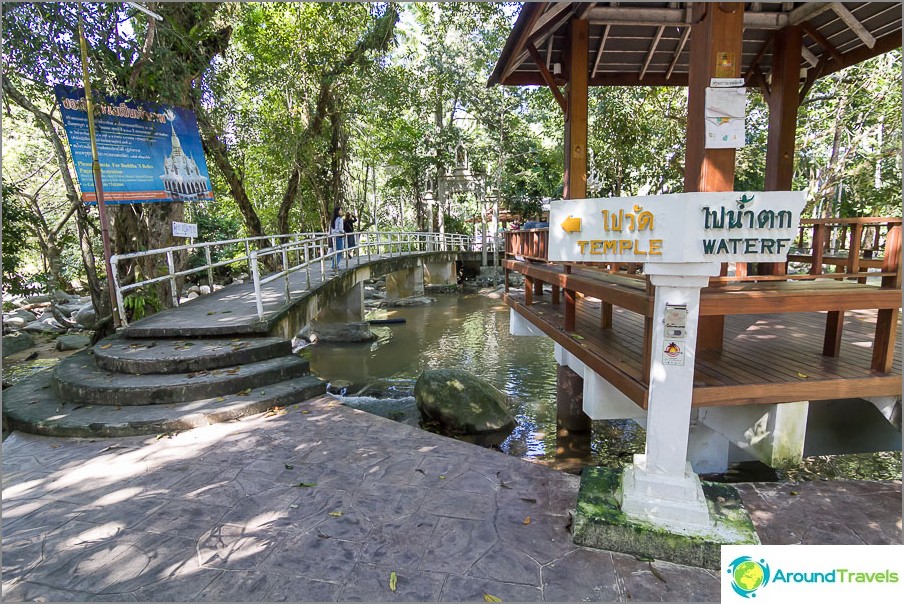 The bridge leads to the temple, and the waterfall to the right along the ladder 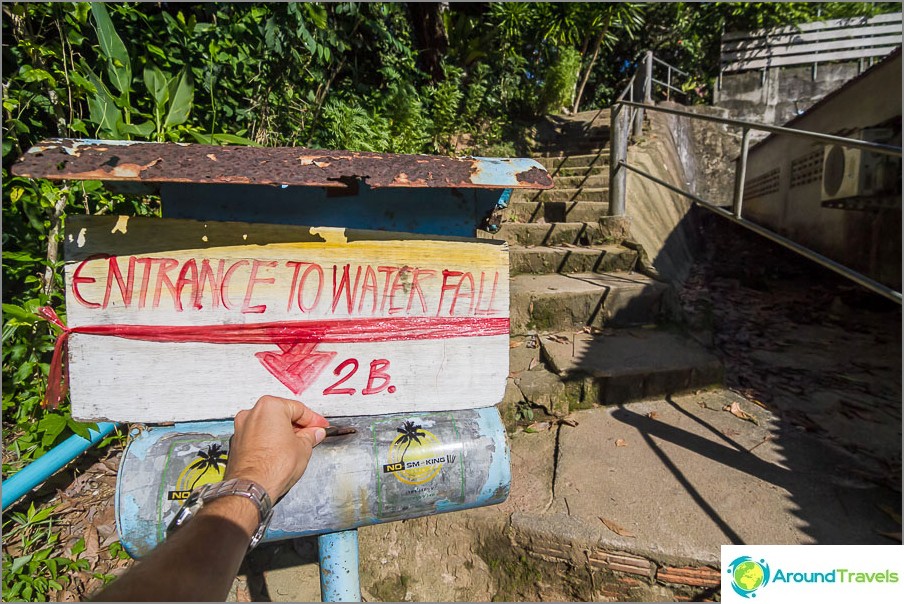 We give 2 baht for the entrance 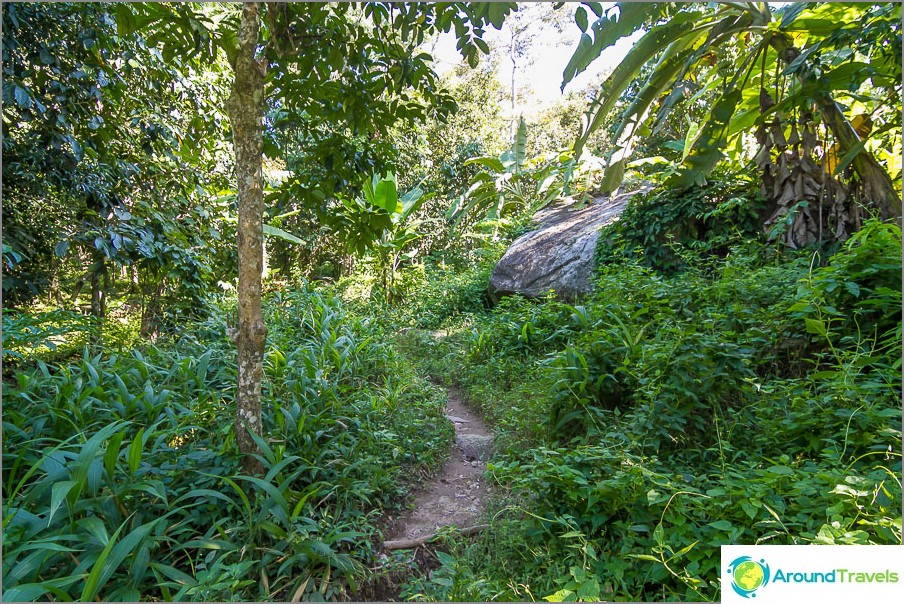 Walkway through the real jungle 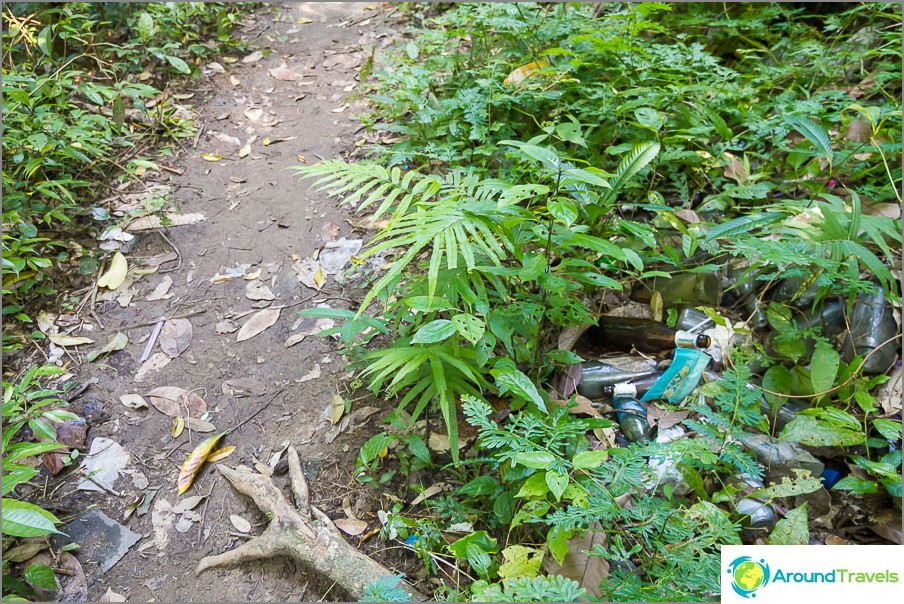 But in some places there is garbage 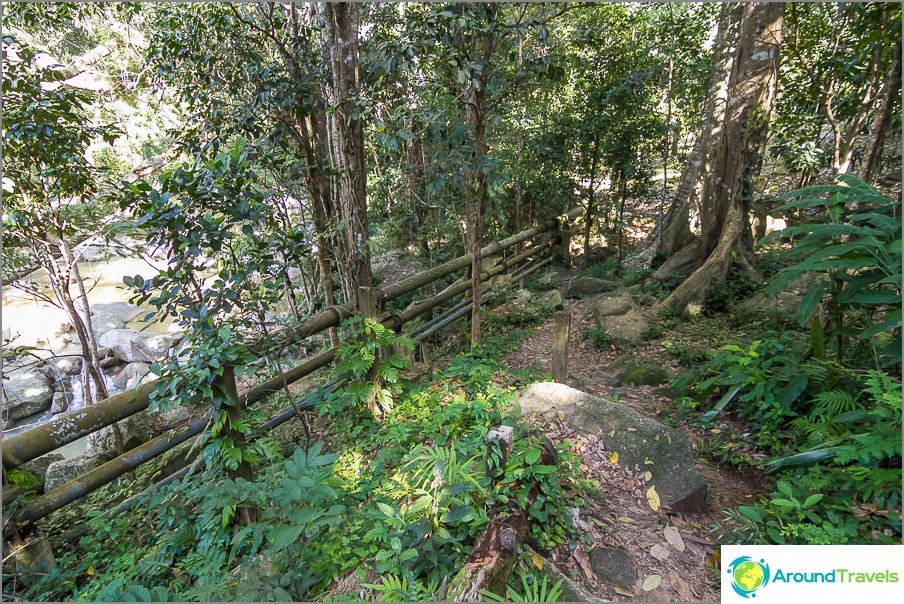 The path goes all the time along the river 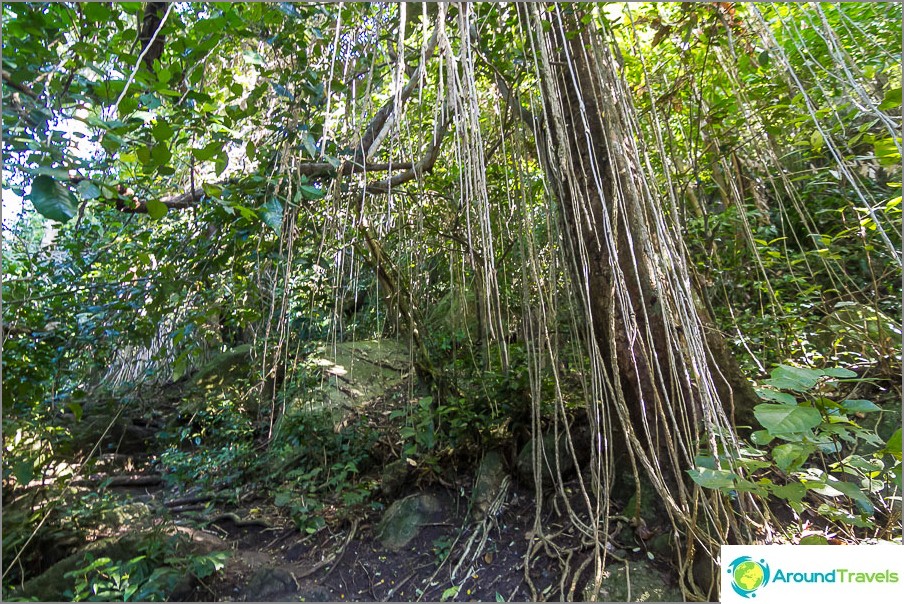 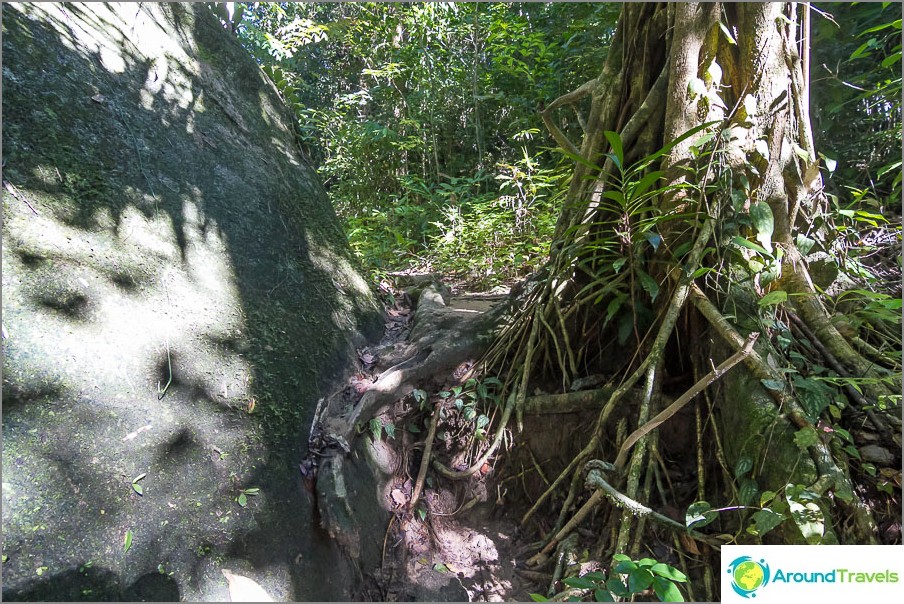 We climb through the roots and stones 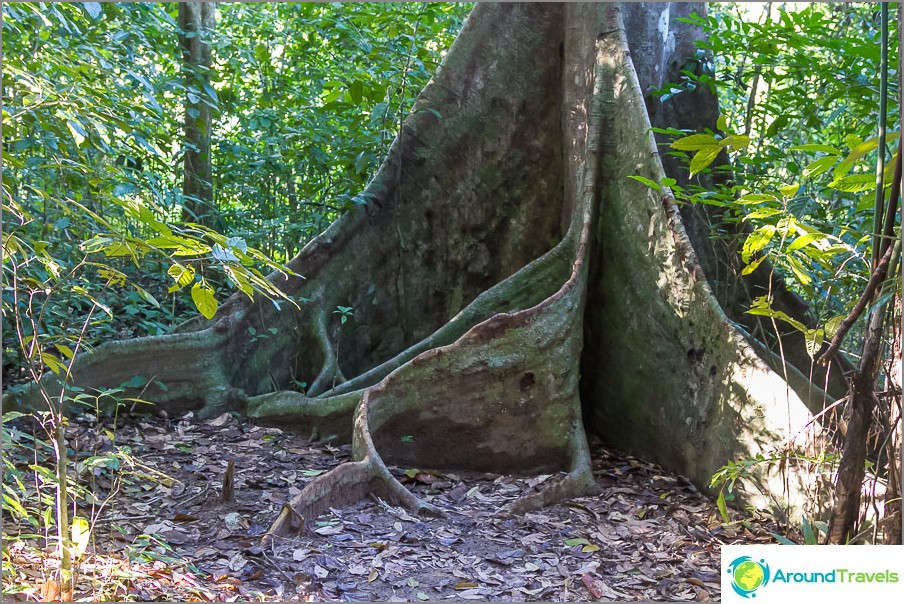 A tree with very interesting roots

Near the waterfall sits taets, sells water andsome drinks. The price is adequate, although he hand his box here. Here you can swim. As I understand it, in a dry time it is easy to approach the waterfall, there are photos where people stand right next to them and this waterfall falls on them. But after the rains, this is very problematic, the course is very wide and deep. 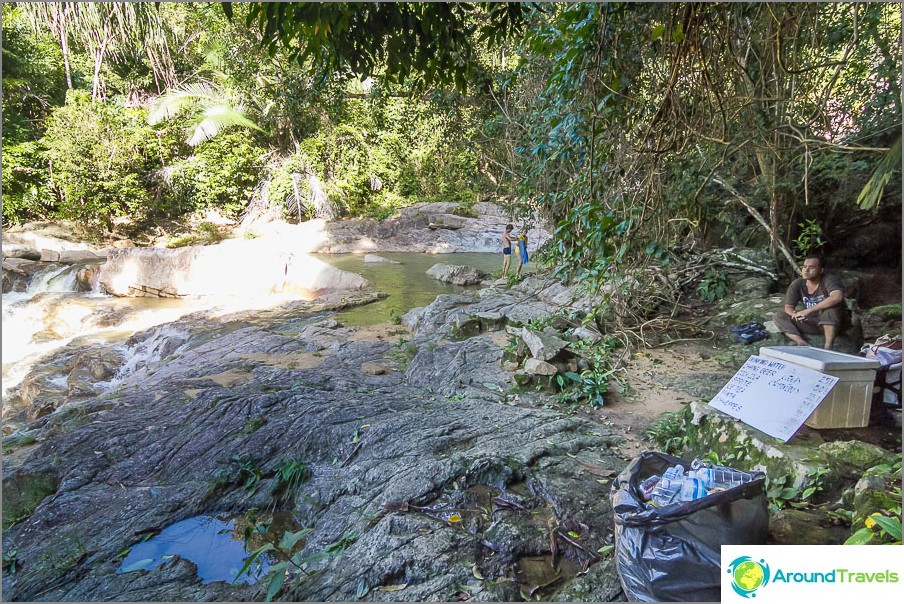 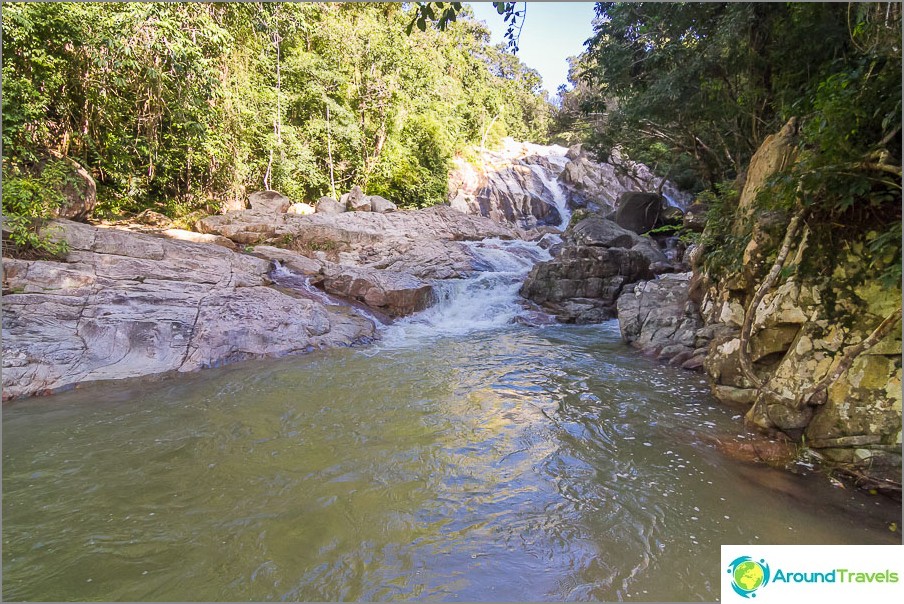 In the distance you can see the waterfall Hin Lad 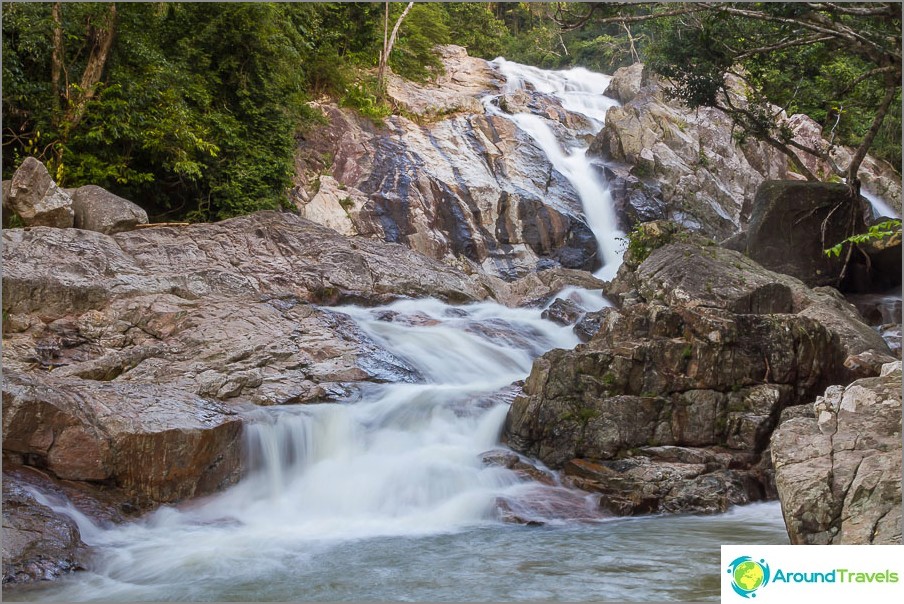 However, I wanted to come closer, so on the right,just where the Thai was sitting, I went further along the stones and the path. There is such a small stone bag, here through it. It may well be that not in the rainy season, people walk this path, I do not know. Just a few more minutes and from the waterfall separates only the bowl with boiling water. Now it does not pass, but again, in the dry season, it seems to be small. Here, it is a little difficult to photograph, for the water dust instantly wets the lens glass. 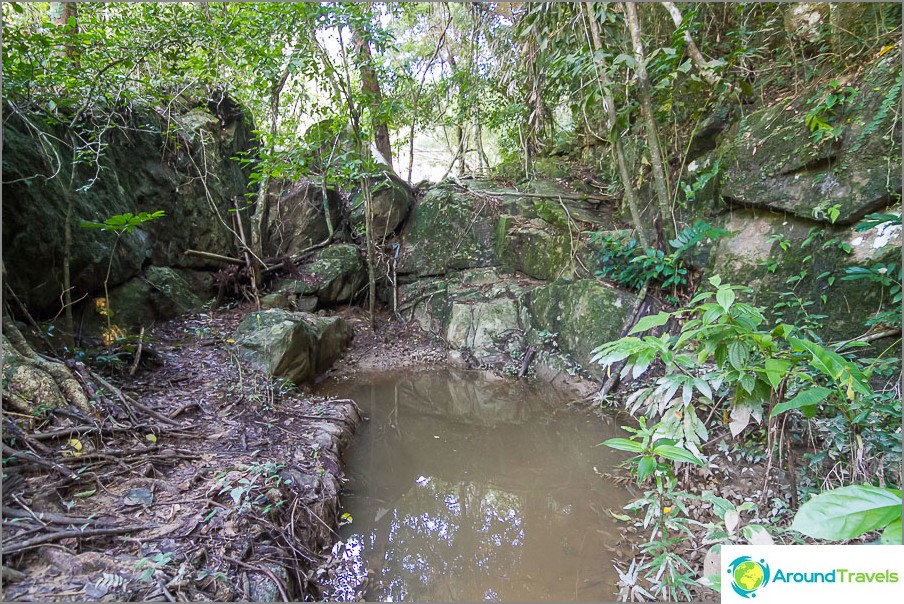 Stone bag to the right of the riverbed 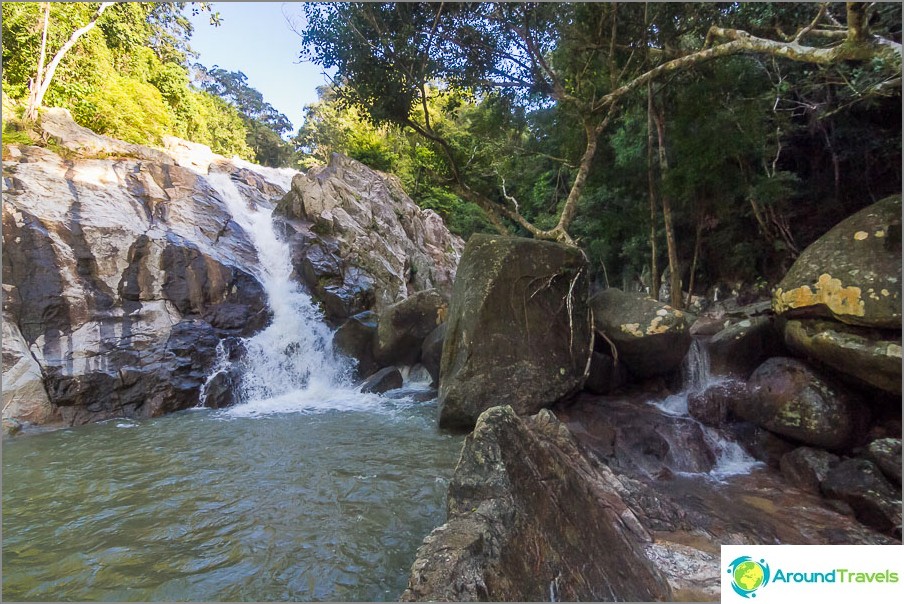 But you want even closer, right? Therefore, not stopping and climb to where people usually no longer crawls. Most likely, they do not climb, because they pass that very bowl to the ford, take pictures of themselves right next to the waterfall and it seems like the deed is done. In general, I again took the right and climbed up. There is a large stone that surrounds the vine, and here it was moving along it, nothing complicated, just a couple of meters. 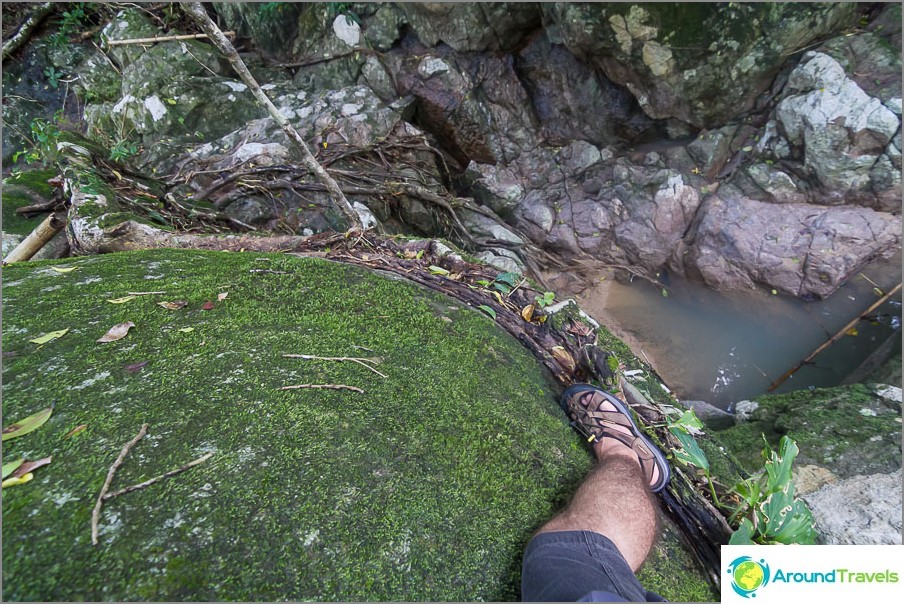 We have to climb on the vine, clinging to the stone

And then I opened a secret oasis! On the left is Hin Lad, on the right is another small waterfall, and the sandy beach between them. I almost do not exaggerate, it was the feeling of the lost world that arose in me then. I spent there at least an hour, wandering from stone to stone ... True, I was still trying to get closer to Hin Lada, and almost succeeded. It is good to come here with friends with a tent for a couple of days and have a picnic. 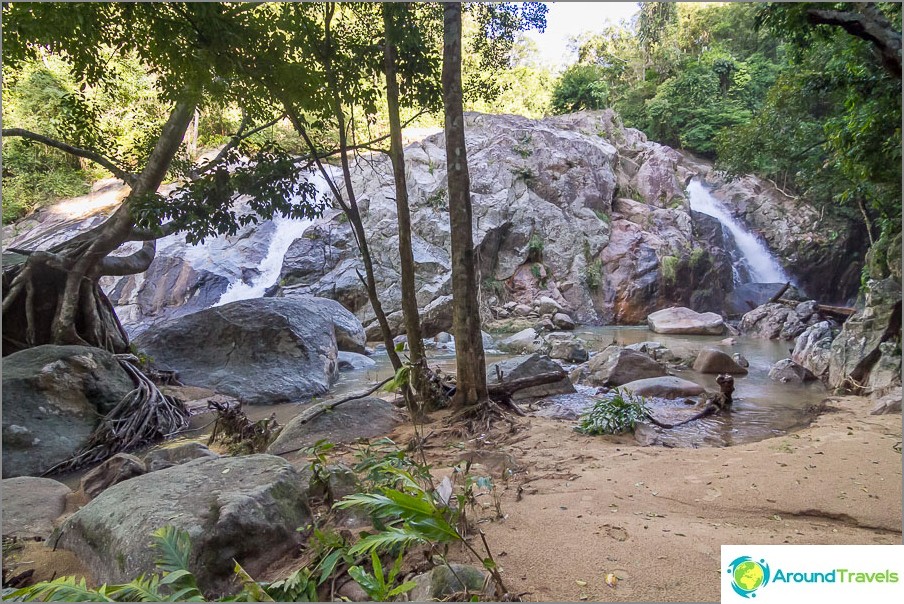 Secret meadow with a sandy beach and a waterfall 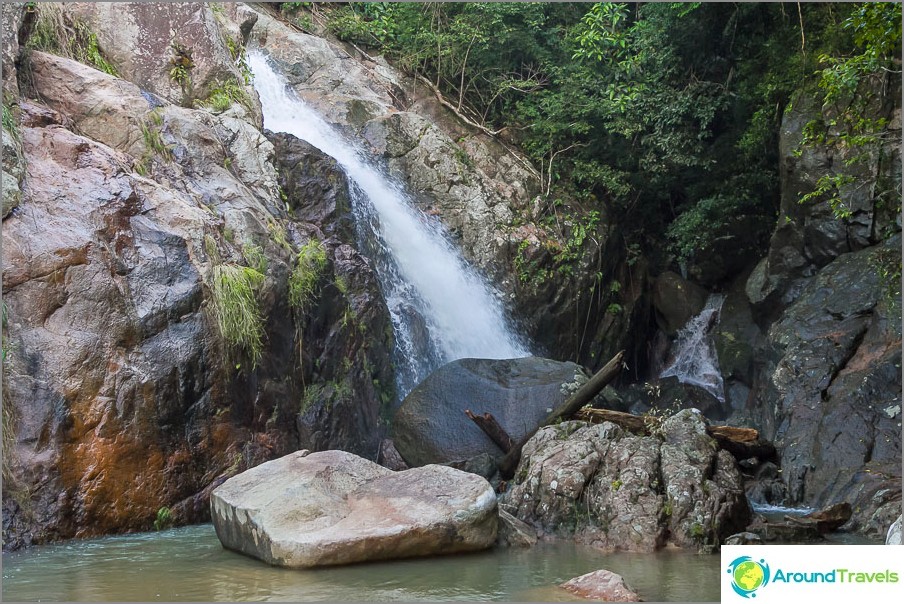 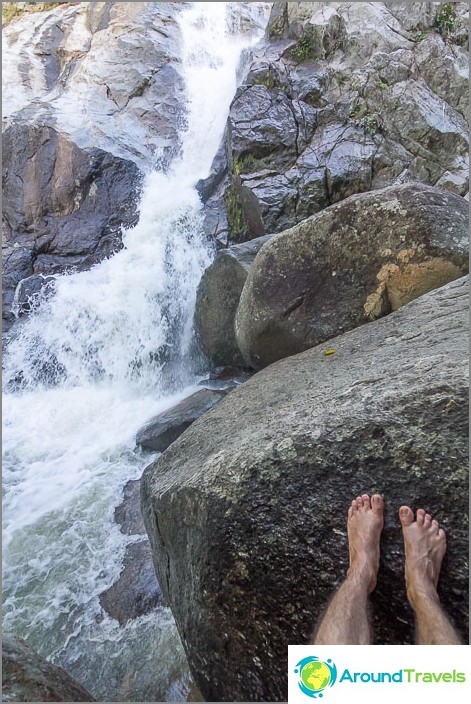 Near Hin Lad, in the space between the stones

Where is Hin Lad Waterfall and how to get there

Entrance to the waterfall is free.

This is the easiest way to come by bike or car. You can also take a minibus and get to the intersection where Immigration Samui is located. From here on foot to the entrance to the temple grounds and paths to the waterfall go 1.4 km.

At the very entrance, where the playground and arbor, you needTake the right of the channel, see the concrete ladder and go along it. Then just go along the path along the river, not paying attention to the ramifications. Go 20-40 minutes depending on the speed. The waterfall cannot be passed, the path ends there. If you saw a waterfall, but the path went further, this is not Hin Lad, it's just a cascade.

If you are going to Koh Samui and want to find accommodation near this place, you can personally see what we have compiled catalog of houses on Samuiwhere more than 80 houses with a map and a photo. Accommodation for a short period can be booked through RoomGuru, it's just a mega-service, you can immediately see in which booking system (Booking, Agoda, Hotels, etc.) the hotel you need is cheaper. And we have our detailed review. best hotels in samui. 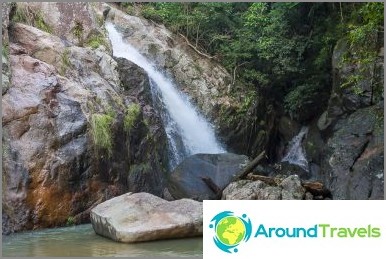 From the point to the waterfall still walk 20-40 minutes along the river bed. Sometimes they write Hit Lat Waterfall. Read about the waterfall and how to go

Video: how a dragonfly eats gecko