When I asked Sochi residents before the tripon the subject of walking places in the city, they recommended the “Upper Embankment” to me, about which I had not heard anything before, although it was not the first time I came here. Googling the information, I roughly figured that most likely it should be a footpath between Central Quay of Sochi and Ordzhonikidze street. As it turned out, I guessed right, but the path here is not just a path, but quite an official, guided tour route, which is called the Historical Boulevard in Sochi. That is, people purposely bring here, to show historical sights, of which I counted 35 pieces.

The boulevard is not so many years, and as I understand it - thisthe beginning of a certain project, according to which Sochi is planning to open a dozen of such excursion routes. Moreover, for independent tourists they want to install stands with QR codes of objects, so that they can receive information about the sights using their smartphones. A walking tour of the Historic Boulevard runs from Maritime Station (at the foot of Hellenic descent), on the upper tierSochi embankment along the hotel Primorskaya, and - to the Winter Theater (garden Sochi Fitofantazii). All that I have just written is the information discovered after the trip, when I found the boulevard itself and from the posters on the route I learned its correct name.

Therefore (but not unfortunately) from thirty fiveobjects of cultural heritage, I paid attention only to some. Why do not regret the loss? Well, arguing from the point of view of an ordinary tourist who is not keen on history and architecture, I saw only the brightest locations on the route, which were included in this photo report. Although no, I’m a little sorry that I did not carefully consider the scheme that clearly showed the end point of the trip behind the Winter Theater - they had a beautiful and cozy garden there that most likely would have delighted me. My path ended near the rotunda with mineral water opposite the Winter one.

What is good about the Historic Boulevard? Shadow and panorama. There is a lot of shade along the whole route, wide walking paths, benches, railings along dangerous cliffs with a view of the sea, several slopes to the embankment below, many flowers and interesting buildings. With a quick step, the boulevard can be overcome in about 15 minutes, and if you walk with feeling and alignment, it takes half an hour or longer. Historical Boulevard is a great place for walking in the heat of the day, and a good sunset place in Sochi. Especially the sunset view from the top of the staircase opposite the Pullman Hotel, there is still a sculpture "Swimmer and Dolphin". 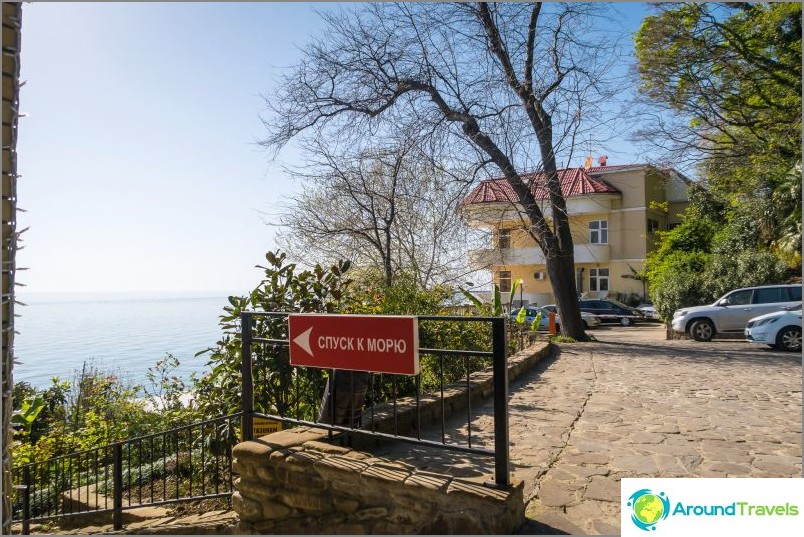 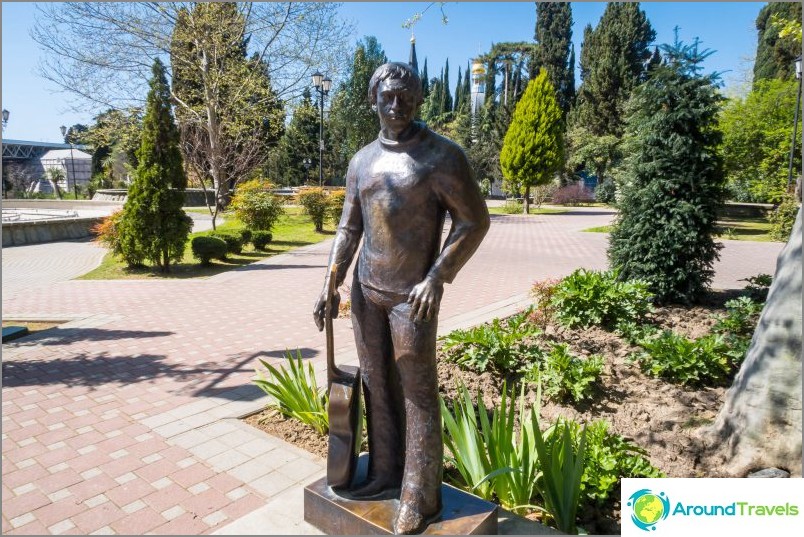 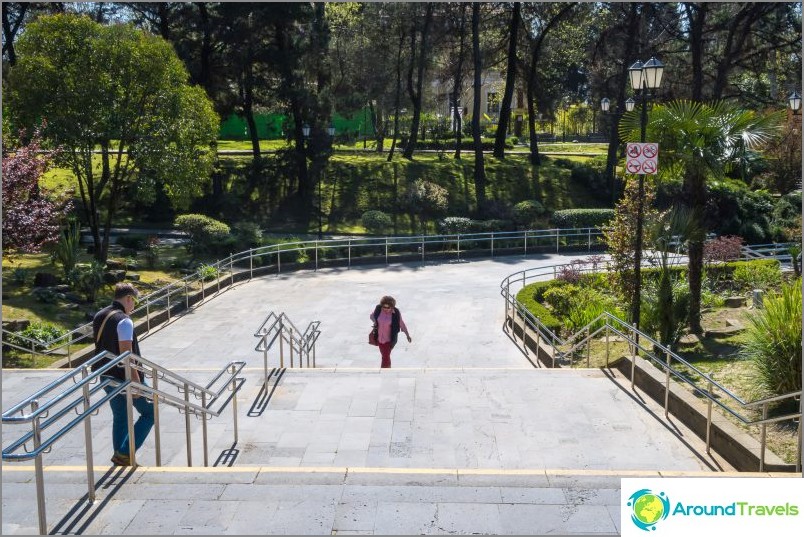 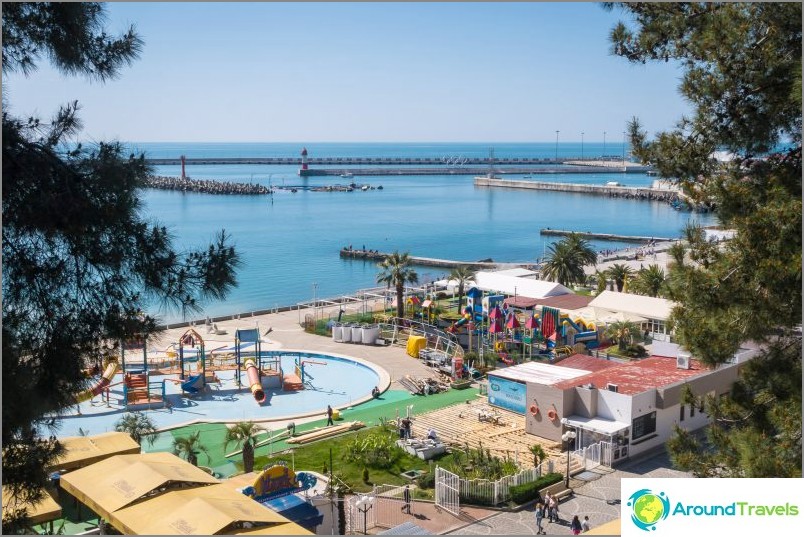 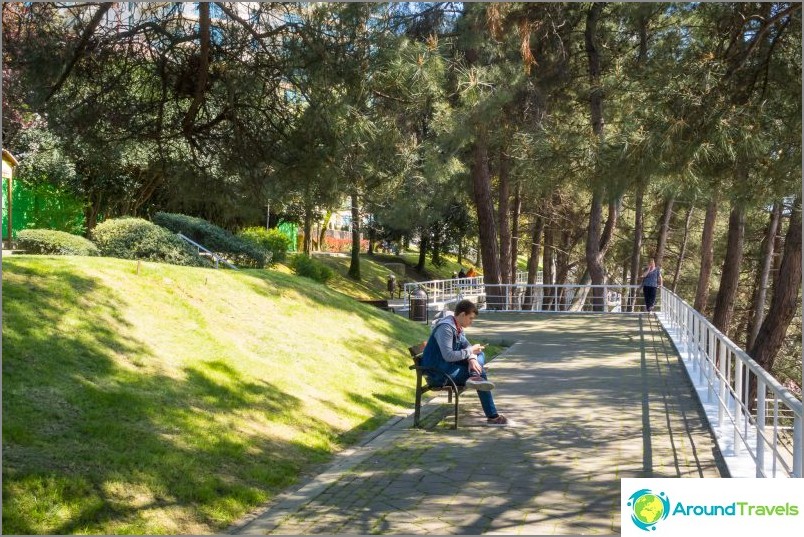 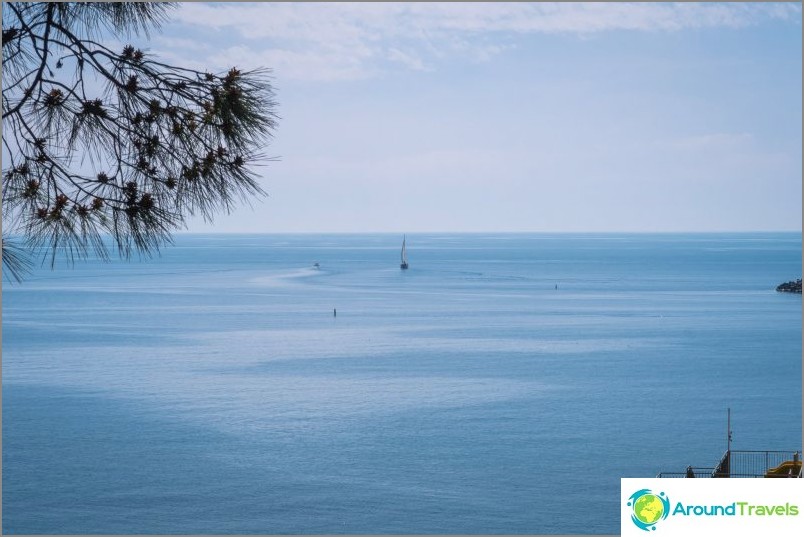 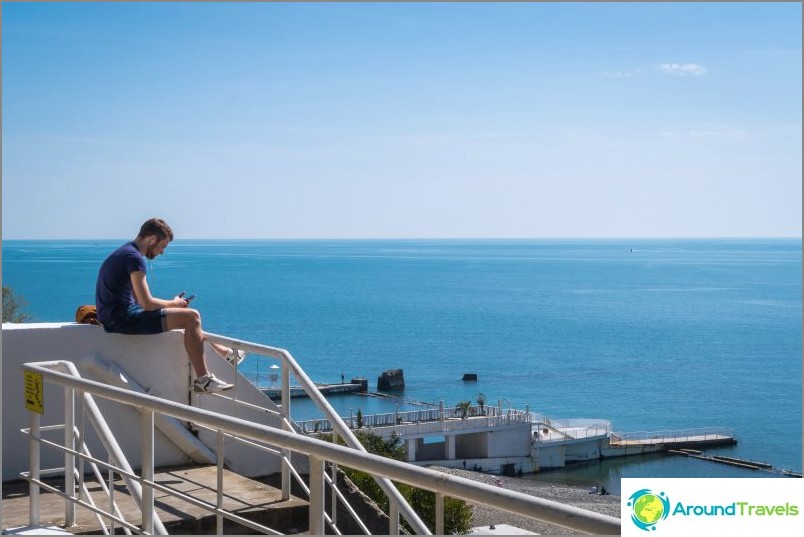 From the boulevard a great view of the sea and sunset 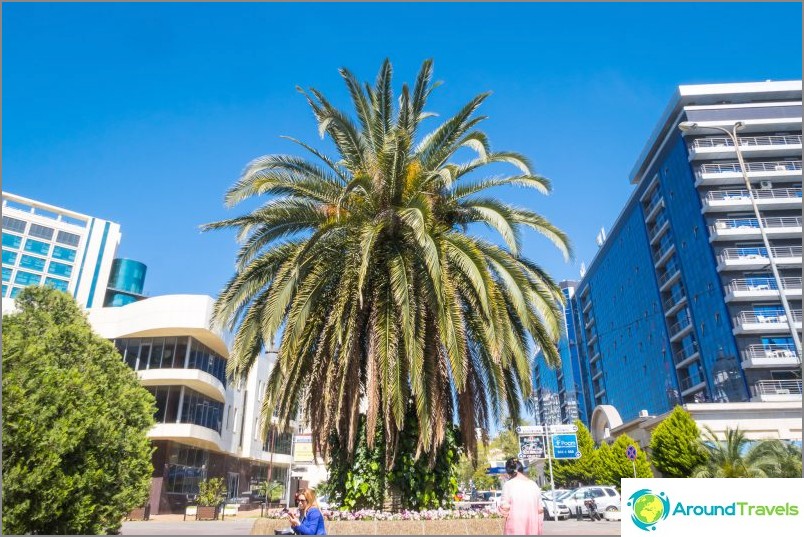 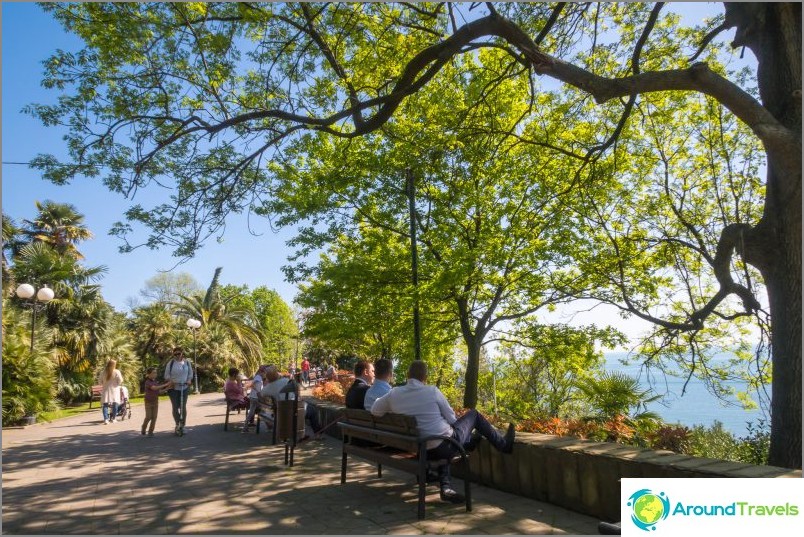 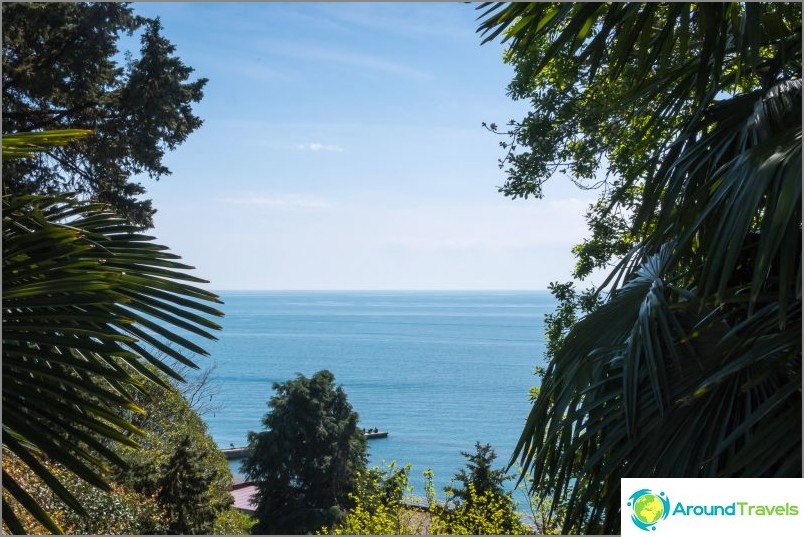 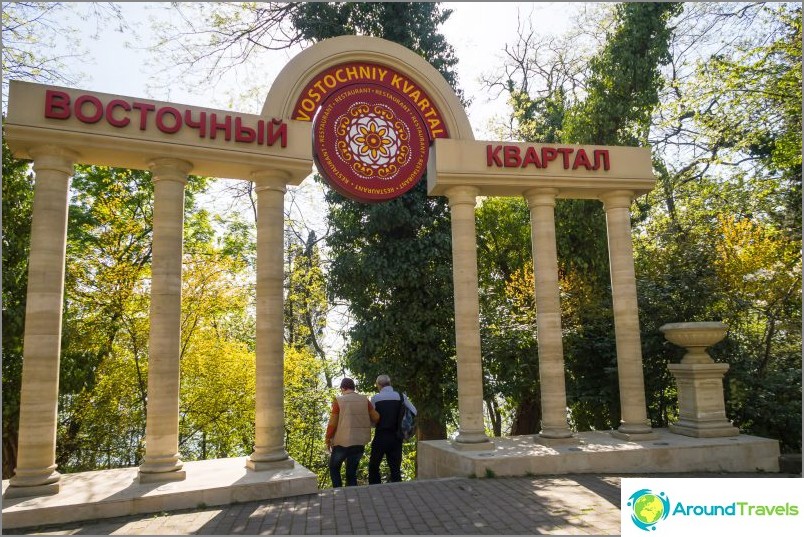 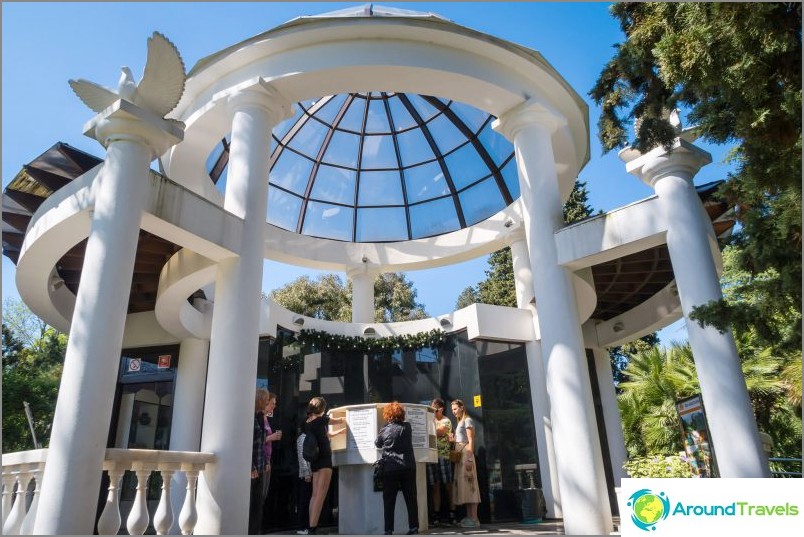 Objects of the Historical Boulevard in Sochi 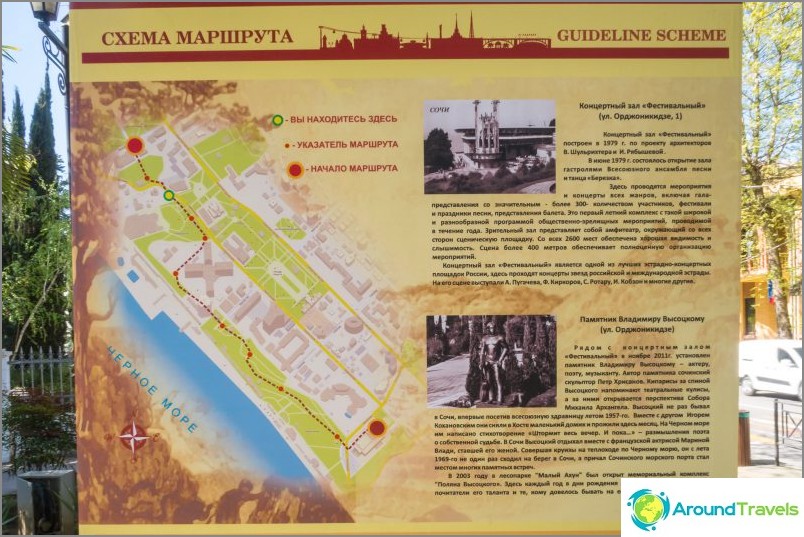 Parking is expensive - 100 rubles per hour. You can put in a special parking (look at the map), and in the parking lot of large hotels - the same 100 rubles to the guard in your pocket.

The best views of the sunset - closer to the seaport.

Historical Boulevard in Sochi on the map