In the heritage from the Olympic Games held here,Sochi has received not only world fame, but also modern tourist infrastructure. Of all the resorts on the Black Sea, there is probably the largest selection of boarding houses, new private mini-and apartment-hotels with a pool, good views and meals.

For the beach season it is best to rent a hotel near the sea, with good reviews and a favorable price-quality ratio. I have a selection on the blog that is relevant for a summer beach holiday - Hotels in Sochi with a private beach. And for a good price-quality ratio, hotels of another selection are selected - Where to stay in Sochi cheap.

Hotels in Sochi on the beach - my selection

Prices for hotels in Sochi are greatly increased inseason. In addition, cheaper rooms quickly dismantled. The most expensive month is August. Below each hotel shows the approximate price for a room in the summer season. The exact cost of the dates you need is better to look at the links.

Sochi is a resort with a long history,Soviet times, known as one of the main areas for summer holidays by the sea. Here is what to do and what to visit. I told separately about the sights of the city in the post - What to see and where to go in Sochi. 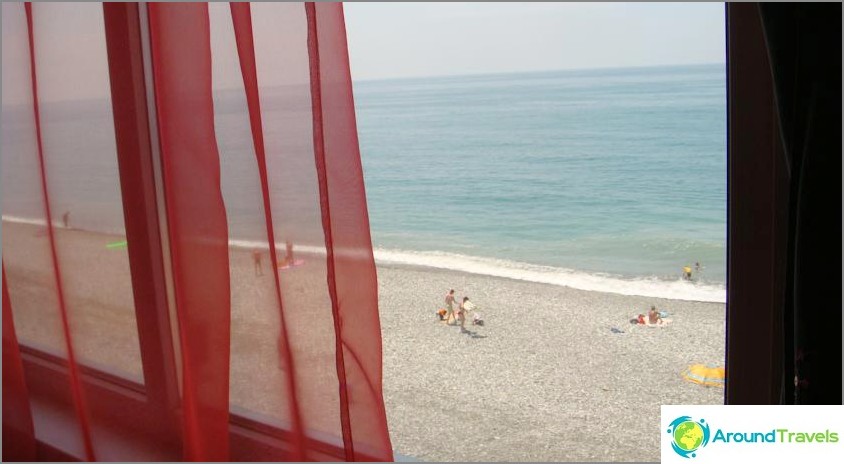 - a hotel in the Loo area, right on the beach. The interiors of the hotel rooms are simple, but quite spacious, functional and pleasant. A beach with pebbles and a rocky bottom, so that during the waves it is not very easy to enter.

But the people on the beach are less than in the center and the seacleaner. The room has a sofa, microwave, refrigerator, air conditioner, kettle, desk, wardrobe, toiletries - almost everything you need for a short stay. On the ground floor there is a kitchen with all the equipment and a common refrigerator.

Guests can also cook kebabs in the courtyard of the hotel. Near the hotel are many cafes and canteens. Hotel for not very demanding guests and a quiet beach holiday. 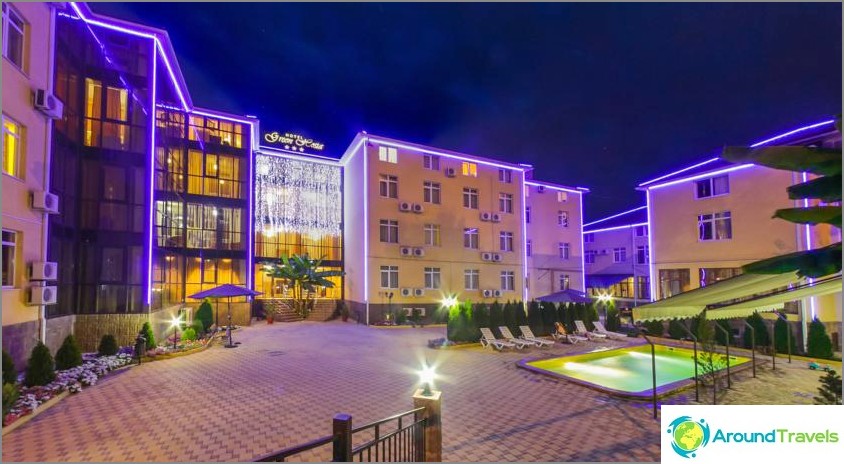 located near the railway station and closeto the beach. Hotel with pleasant modern interiors, comfortable and clean rooms. The room has air conditioning, LCD TV, refrigerator, you can ask a hairdryer and kettle. Bed linen and towels are changed daily. The hotel staff is friendly.

In the halls there is a cooler with hot and cold water. Guests also have free use of the gym and wi-fi. The hotel also has a well-kept courtyard and a playground, its own private parking, there are rooms with a balcony. The area where the hotel is located is quiet, there are cafes and restaurants nearby. 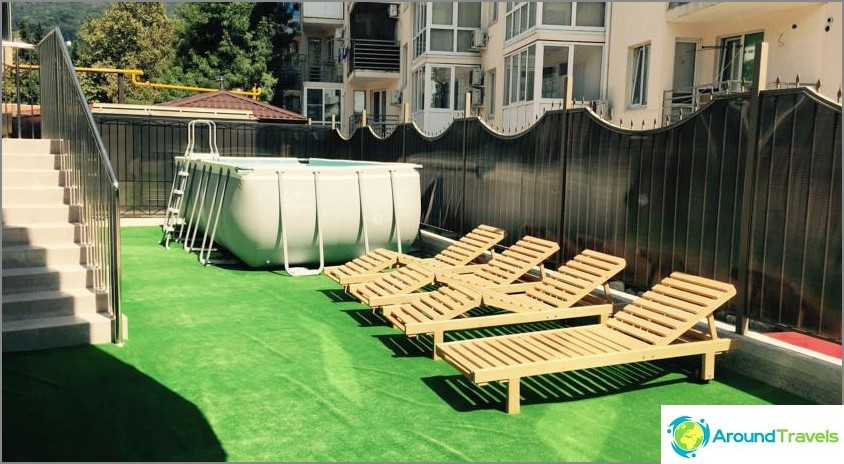 - a new 3 star hotel, located next to the railwayKhosta station and very close to access to the beach. Nearby are cafes, shops, dining. At the same time the area is quiet. The interiors of the hotel are comfortable and modern, everything is clean, the staff is attentive and friendly. The hotel offers breakfast, you can order dinner.

The room has toiletries, wi-fi. In the corridor there is a cooler with water (hot and cold) and an ironing board. The hotel is declared as a three star. Well suited for a winter holiday (convenient to get to Krasnaya Polyana), and for the summer beach. 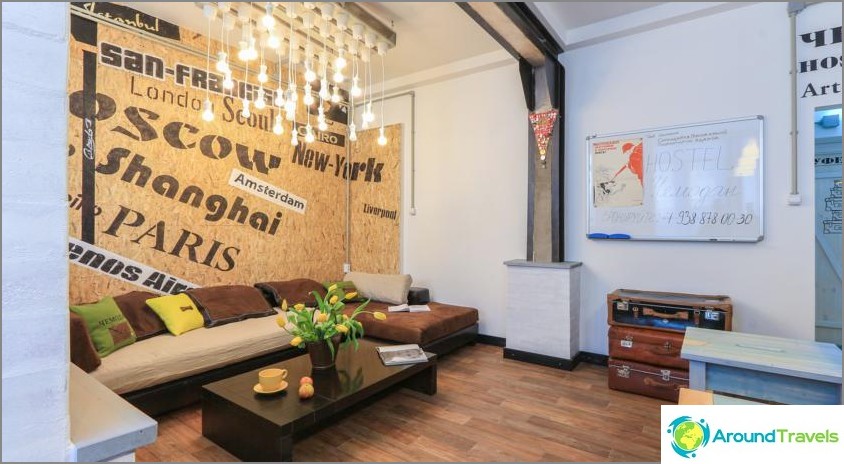 - youth residence option for those wholoves hostels, "Suitcase" fits just fine, this is perhaps the best of the options of this kind in Sochi. New, modern and stylish design. Thoughtful and comfortable common areas, there are all necessary household items for a traveler. Everything is clean, the atmosphere is also pleasant.

The location of the hostel is also good - in the center.city, close to the promenade with entertainment, the sea, the beach and major attractions within walking distance, near the bus stop. The hostel staff is very friendly and helpful. The hostel is small, so it's quiet in the evenings. There are separate rooms for two. 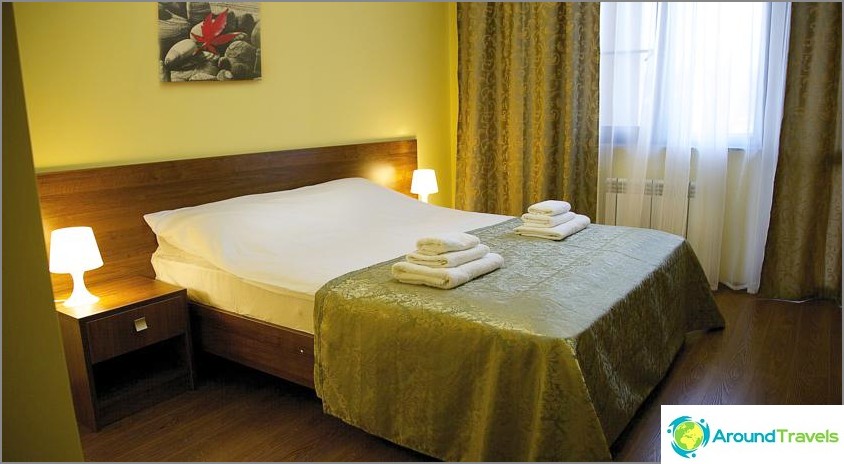 - a new hotel with a good location andby the staff. Nearby is the railway station Dagomys. The hotel has free wi-fi for guests, near a nice beach. The place where the hotel is located is quiet. The hotel has the possibility of washing, good breakfast, in the room there are tea and toiletries. The rooms are clean and spacious. From hotels in Sochi on the seashore in terms of price quality is a very good option, convenient for a relaxing and comfortable beach holiday. 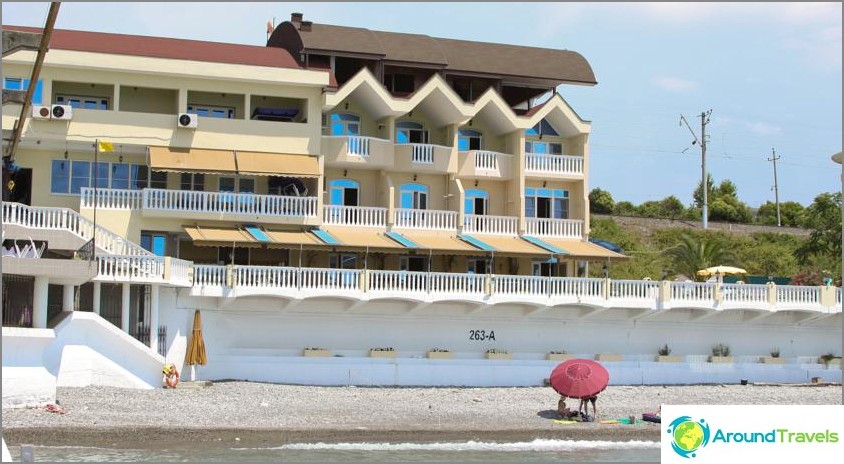 - beach hotel on the first line, with spaciousrooms and friendly staff. The hotel has delicious and varied breakfasts, its own beach with sun beds and towels. The area where the hotel is located is quite far from the center, but quiet and clean. To the bus stop a few minutes walk, also to the center of Sochi can be reached by taxi. In general, this is a fairly simple but pleasant hotel right on the seafront, well suited for a beach holiday.

Sleep by the sea> 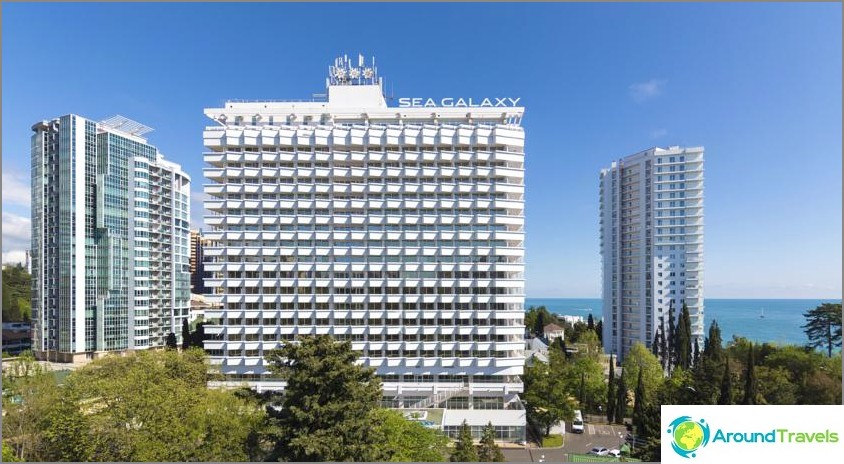 is a large and popular 4 star hotel. Located on the beach, and at the same time right in the city center. The hotel has a pleasant area, the rooms are well equipped for a comfortable stay. The rooms have toiletries, on the floor there are ironing boards, free wi-fi. The hotel has good breakfasts, there are also lunches with a buffet system and dinners.

The rooms are clean, with a good view from the windowson the sea. The cons of the hotel are primarily related to its size. Not always and everywhere wi-fi works well, during check-in and check-out there are queues at the reception. Since there are always many guests at the hotel, waiting for an elevator is often a big problem. So settle better on the lower floors. Or stock up on patience. 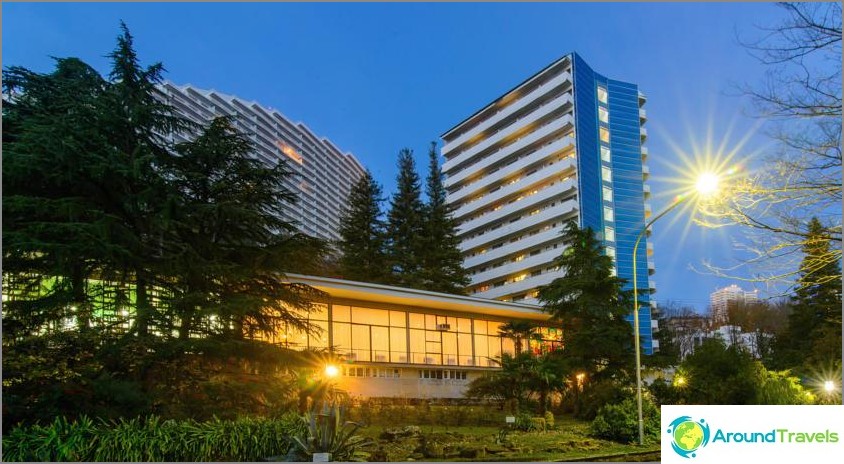 3 stars, with the possibility of treatment and a varietyprocedures, located on the beach in the heart of Sochi. A good buffet, good service, a private beach, a walking area - all this makes Sanatorium Actor a rather attractive option for a relaxing family holiday. The sanatorium has its own swimming pool with sea water, it starts from the health walking path.

The rooms in the resort are functional, clean. Not the worst analogue of the Turkish all-inclusive beach hotels, albeit at a discount to the Soviet past. The guests of the sanatorium rate it rather highly, the reviews are good, so for lovers of a relaxed holiday with wellness procedures this option is just fine. For rest with the child the sanatorium Actor is also a good option. 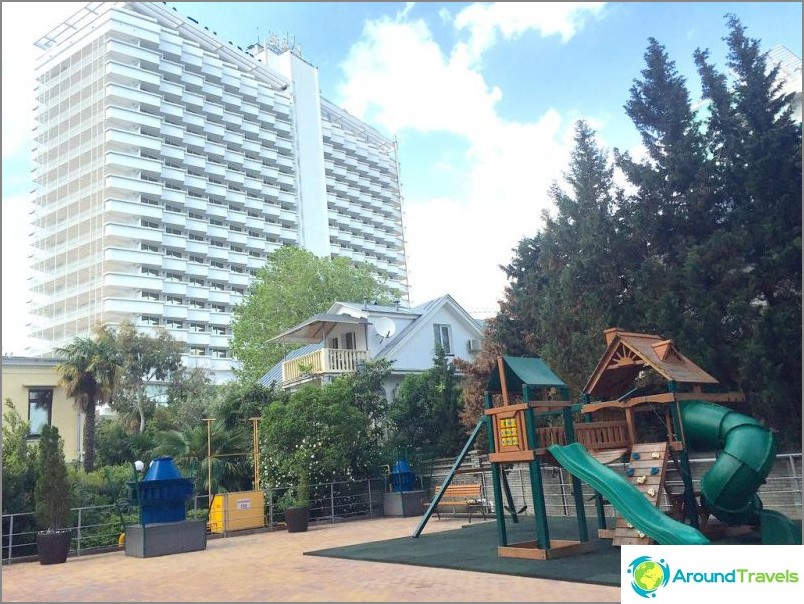 - literally two minutes from the beach. On the territory there is everything necessary for a family vacationer: parking, playground, restaurant, and even bicycle rental. The rooms have all the necessary household appliances (including a washing machine, dishwasher, oven and TV), there is a good free internet.

How to rent a vacation home in the ...

Hotels in Sochi with a private beach - ...