How to rent a house in Gelendzhik - search methods and conclusions

When we arrived in Gelendzhik, it seemed to me thateverything will be somewhat simpler than it actually happened. The calculation was this - we arrive in mid-May, not yet a season, renting houses for a month, and everyone is happy, and the owners, that they will earn extra money, and we, because we will save on rent. Perhaps we were simply spoiled by Southeast Asia, since everything is logical and simple in this respect.

I once wrote an article Rest on the coast of Russia or in Turkey?inspired by our monthly travelRussia, and in principle my opinion has not changed. I still do not quite understand why to go there for a beach holiday, not normal beaches, no service, and even mud will be a shaft in a season. Rest with a tent you can understand it, but if you go to a hotel, then even with a flight it will be cheaper in Turkey, only the level will be completely different. But oh well, talk about the findings in terms of housing.

Findings on rental housing for the month

So, although we did not come to rest, but lifepotestit on the subject of moving, but in fact our search for housing was slightly different from the search for ordinary vacationers. And that's why - almost no one wanted to give us a discount on accommodation due to the fact that we immediately wanted to rent for a month. For local it is too short a time and we do not fall into the category of a long-term lease. Thus, in one season, or just before the season, the duration of one month means nothing, and most of the landlords want daily payment. Of course, we found a couple of options, but it’s still necessary to search So you can qualify for a discount or, if you shoot really for a long time, or not in season, or for the whole summer period. That is, ordinary vacationers who come on vacation, shines only daily rent. 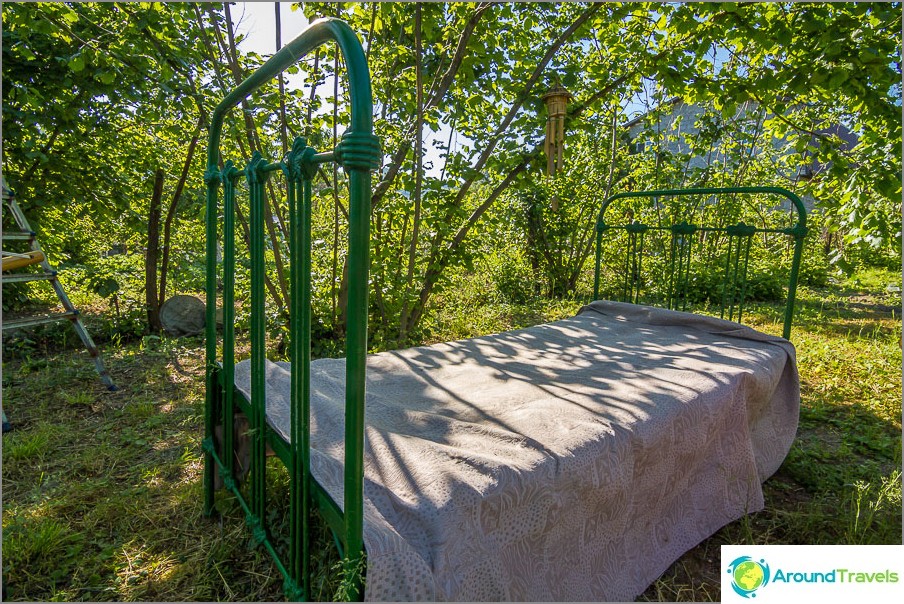 How to rent a house in Gelendzhik cheap

The second conclusion we made is the owners of the rooms.they may simply not want to rent a house, because it is not ready yet, they say, it is necessary to sweep up, to give out the washed clothes, the season has not come yet and so on. I almost have to beg, and the people are so reluctant to talk, with such a straight face, mda ... And they say that they live poorly

Ha! Yes, for me, everything is fine here, since no extra money is needed. There was one woman, who even at once specially called the price high, in order to end the conversation as soon as possible.

Sometimes there was a feeling that all landlordstacitly agreed among themselves that in no case can dumping. You come to the guest house, and there isn’t a soul there, and obviously there will be no one else for a month, but there is no discount, no indulgence, and the summer price is beating. Most of all, it was striking that housing in the village of Beregovoe (5 km from the sea and zero infrastructure) is more expensive than in Gelendzhik and comparable to the price of an apartment in Moscow. 15-18 thousand per month for a small room without comforts with 2-4 beds and scooped and rickety wardrobe (by the end of the summer it will be even more expensive). I was so shocked that I didn’t even take a picture of IT. In Gelendzhik, of course, this also occurs, but the conditions are generally better, the air conditioner maybe, a bathroom in the room, and so on. 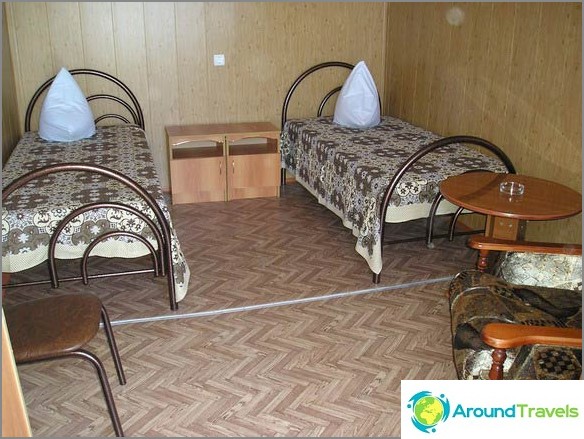 Photo from the Internet, that's the type of it costs 15-18 thousand per month in the Coastal

Most often the price is not for the room, but fortherefore, if you are traveling a lot of people, it may be cheaper to rent an apartment in Gelendzhik or Divnomorsky, because the apartments often pay for a large family and put up several beds, with a limit of 4-6 people, and conditions there isolation account. When renting an apartment, it is worth bearing in mind that many of them only rent daily for the summer period, and even those who rent an apartment have to pay a higher price for the summer months.

How to rent a house in Gelendzhik

Turning to the point of how to look for housing inGelendzhik and surroundings. Honestly, there are few normal sites, that is, there are many sites, but everywhere there are only intermediaries and outdated data. You call the “owner”, and they tell you right away, and there is such an apartment, and such, but this quickly diverges, prices are in no way lower, decide quickly anyway without an agent. Vparivayut in general.

At the beginning of the season (end of May-June) the cost of housingin Gelendzhik starts from 250-350 rubles / day per person for a simple room with private facilities (sometimes conveniences divide 2-3 rooms) and anywhere from 1000-1200 rubles / day per apartment. Then prices rise every month, reaching 500 rubles and 2,000 rubles in August, respectively, and in September they fall to the June level, then the season ends.

Actually the main way to search for hotels same as in Asia - namely on the spot orrecommendations from friends, because so many hotels are not present anywhere on the Internet. Arrived, walked in the right area, asked around, looked at what was most suitable, and settled.

True, this way is easiermini-hotels or hotels to look for, because they have signs on the street hanging "Rent rooms", "Hotel such and such." But with the apartments other ways: the Internet, newspaper, agency. Of course, you can also look ads posted in the area to look, but I have not tried.

Also, do not forget that even at the railway station or inthe airport, especially after the season has begun, will be met by the owners themselves and taxi drivers and they will be intrusively offered to settle in 50 meters from the sea for “very cheap”. If you are already in Gelendzhik, then you can go to the car dealer (which is old and in the center of the city), there is always one of the offering ones.

Hotels and rooms in guest houses better searchtraditionally on Hotellok. This is an excellent price comparison service for hotels in various booking systems. I know that many people use only Bucking, but there are a lot more booking systems and at least a couple more it makes sense to browse if you are traveling in Russia.

Since the Hotellook shows hotels immediately fromof all systems, the base is just awesome. In any case, find something. Well, and as I said, you can choose through whom to book a particular hotel will be cheaper.

I would recommend using only two sites.To search for apartments - Airbnb and Avito, there are the largest and most current offers. Moreover, the services work in completely different ways. Avito - this is just the most common ads, then you will encounter the same intermediaries, stumble upon outdated ads, do not get any guarantees. Airbnb, on the contrary, is a special service for direct booking of accommodation, with some guarantees, payment on the map, reviews from other guests.

After registering with Airbnb, you can get$ 20 bonus on this link. The bonus can be used within a year after registration by making the first reservation. And be sure to look at my post. about the Airbnb servicein which I told how to register, how to confirm an account, how to search for housing and so on.

Below is another link to the sites I threw, they are muchmore, but even to see these sites take time. Plus, you will need to ring up your favorite options and find out if the room / apartment / house is free and what the conditions of the reservation are. At the same time, there are no guarantees that you will not be thrown into the money when you make a preliminary reservation or to a room that will be occupied upon arrival.

Search for housing through the newspaper

The newspaper is called "With a light hand" and in itplaced ads for renting or selling. To make it easier to understand, I will explain that there are ads in blocks, first rooms, then 1-room apartments, then 2, then houses and lots. And you need to scroll through almost the entire newspaper, because the blocks are not in a row. 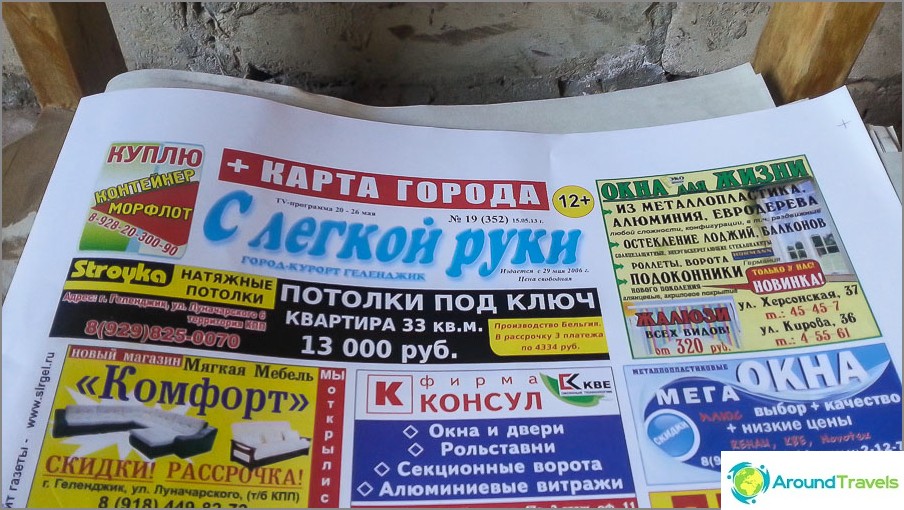 In fact, this method is more suitable forsearch for apartments, not rooms, and for a long time. There are much more such announcements than on the Internet (only on Avito I met offers for a long term). But there are also offers for rent there. It is worth considering that there are enough agents here, some of them can be calculated by the same phone number.

In brief, I will describe our experience, suddenly someone will come in handy.

P.S. I do not see the point in photographing all the housing that I saw and doing a review, because there are too many of it and it is quite the same type. And the apartments and rooms on Airbnb, you yourself can look at their website.

How to distribute Airbnb bonuses correctly and avoid ...