How to save money in a crisis traveler?

It would be dishonest not to write anything after I posted a post about how can you keep moneyto which i still get questions. After all, I have now simplified the scheme considerably, let's say, reduced income in order to please my peace of mind.

Certainly, many will not support me, alarmist will say, but after fall of SB BankI firmly thought about whether I need nowAll that amount of bank accounts and cards that I have available. Apparently for a year or two it makes sense to simplify the whole scheme and take everything to Sberbank / Matrasbank (or to a similar bank) and wait there. Well, this is if you are worried and worried, because if you believe in the DIA’s ability to repay debts to infinity and believe that everything will be fine with the banking sector in the near future, then, of course, there is no point in twitching.

I decided for myself that I calm down reducethe number of banks, close the ruble deposits, withdraw part of the cash in order not to twitch and not track the news, which bank collapsed today and how much money the DIA left. Even now interest rates on ruble deposits are good, but it’s not worth it when the ruble can fall by a factor of 2 over a couple of months. The recoupment of such deposits for several years, no less, and that if nothing changes dramatically.

They even officially say that banks shouldstay very little in the country, which means that not everyone will be supported in case of defaults. So, most likely, only such large banks as Sberbank, Alfbank, VTB, Promsvyaz and other top-end banks will remain afloat. That is, now even in the TOP-100 you should not keep anything, the SB-bank was in the hundreds and where it is now. Rather, TOP-10 is needed, even with worse conditions and service.

I have so far reduced everything to Sberbank, Tinkov, and Kukuruze. Moreover, in the last two I don’t keep significant amounts, and the TKS ladder temporarily closed everything. Accounts in other banks remained, in particular, a credit card from Homecredit, but I don’t keep my money there. And I also thought about opening a limit loan for Maizenevertheless, conversion at the rate of the Central Bank is now veryuseful thing (almost no one else has), besides the first 6 months will give cashback 3% on such a credit card. And since Corn is not exactly a bank card (the DIA is not insured), then it is better to use its credit funds so that in case of anything not to lose anything.

Again, for your peace of mind, decided furtherto keep money for the most part not in rubles. IMHO, it is better to buy bucks on rebounds, there was already a course of 53 before the New Year, and 63 in mid-January 2015. And much lower is unlikely to fall anytime soon. Although, of course, it was necessary to think about it earlier, and now it may be too late to make sharp movements. I was lucky, I managed to go at a more or less normal course.

And so, when there will be 70% of savings in foreign currency,you can just relax and watch the process (in the sense of courses). Alternatively, you can speculate on courses or stocks to buy, if you know how. But for the savior (and amateur) of the type of me, it's easier to just sit in a currency and wait

Alternatively, you can buy something. But, if the crisis is protracted (and it is likely to last several years, no less), then the “3rd TV in the apartment” is not the best solution when there is nothing to eat. Therefore, currency is preferable. On the other hand, it makes sense to buy something necessary, which is necessary for anyone, and that they were going to take, for example, a car in any case. Then you can still sell it at a higher price than I live, the prices for them never fall.

Money on a trip

When traveling, saving money in a crisis has becomecompletely uncomfortable. After all, if you leave for a long time, you lose the opportunity to quickly resolve some financial issue. For example, if a license is revoked from a bank, you will have to return to Russia and personally take money from the DIA. Either that or another bank card will cease to work abroad, and you counted on it ... Do not drag a pack of dollars with you for six months in advance. I remember that I wrote take a minimum of cash, but now apparently need to revise itsposition, and cash needed for anyone. Only here is where to store it, not every hotel / house has a safe. I don’t speak about turning off Swift now, because, I think, this is unlikely ... 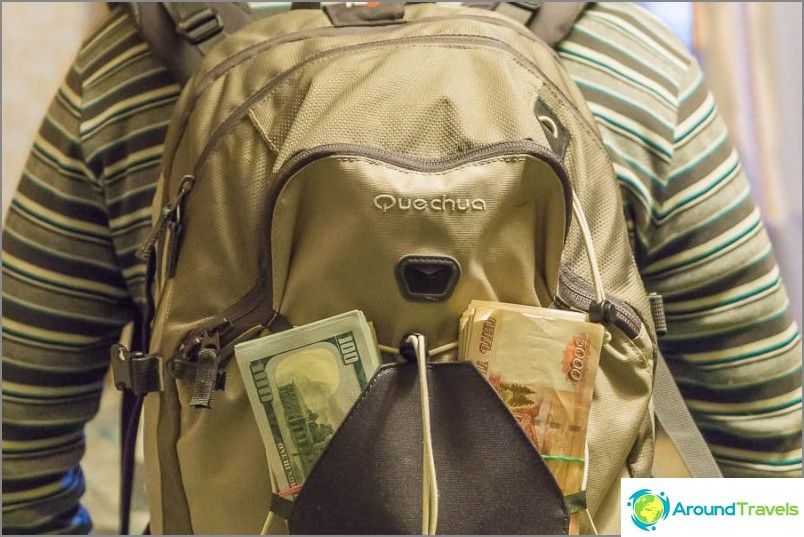 Do not travel with cash!

If somehow summarized, then:

P.S. Have you already done anything to protect yourself financially, or just to make your heart better? Or do not bathe at all? Somehow it is dumb to leave, when all the money is only in Russian accounts.

P.P.S. This is not really advice, it's pretty obvious

Himself in some kind of suspense and think how to do it.

Ban at Hotelscombined and experimenting with hotel ...

The results of the competition "The most memorable journey."