First of all, I would like to know the opinion of othersbloggers about this. We all face trolling sooner or later, even novice bloggers, and even those who blog exclusively for the soul and write there once a year.

Where the trolls come from, I have no idea, maybesomehow connected with education, culture, and ultimately the past of our country. And even though according to some statements of my friends (I myself am not very aware) that such individuals are much less in the burzhuneta per square megabit, I have a feeling that they are found everywhere, in any countries. Human nature is apparently such that, under certain conditions, it begets a troll.

Who are the trolls

Surely everyone knows, but I will explain. Trolls are individuals who are constantly in a state of disharmony with this world and are fueled by human negative. It seems to me that most of them are mentally unstable people, of which there are plenty in our world, for it is far from perfect. The smallest part is those who are just amused, or paid for, whose goal is to create as large a wave as possible and direct it in a certain direction.

Here I would also take those who can not expressyour opinion is cultural. Apparently, it happens this way: a person sees a different opinion on his website, and he immediately has a roof, like a bull at the sight of a red rag, opponents become bad people / fools / unfaithful, and he goes on a verbal crusade on them, applying all your knowledge of the transition to the individual and trying to hurt for a living. He probably thinks that in this way he will save the sinful soul of the enemy from heresy. This does not always happen rudely, but if the main desire is to convince the “idiot” and explain that he is mistaken, then this is already trolling. 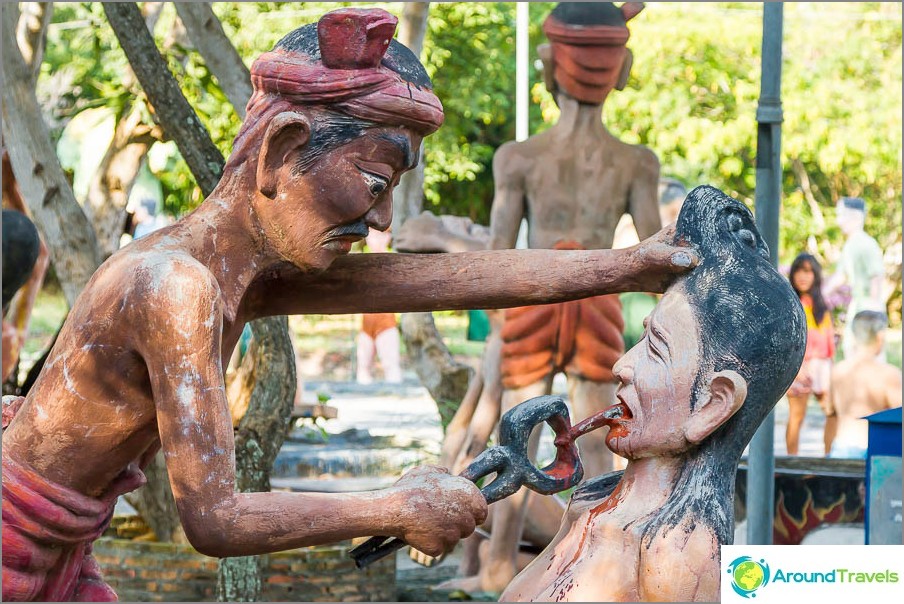 In the Buddhist temple is very revealing miniature, just for the trolls

There are still hidden trolls. There are less, but with experience you recognize them by the first message. Usually just the first message is normal, but with some hidden hint. With further promotion of the person, by asking questions, and what was really meant, the rest of the stream skillfully hidden pours onto you ... and. The motive of stretching pleasure is not quite clear to me, because in their place I would throw everything at once

But apparently the most important thing is to engage in dialogue, and thenalready arrange skirmish. It’s possible to take a blogger as a rule to ask a control question, you never made a mistake, but only then to ignore it. It's funny that some do not immediately leave, and then another week or month bother with messages in a personal, trying to send comments from other IP and under other nicknames. Although it would seem that they care.

Why do I care about this topic

Natural question. The fact is that when you write just about Thailand and about your travels, the maximum that you get is negative is that you made a mistake in the article in that it wrote that this or that beach / city / country is the best, or something like that. Yes, even the most innocent topics cause holivars (holy war). But as soon as the author begins to write about personal topics, there are much more opportunities to get to the bottom. And it is obvious that when something more personal is written to you, about a child, about a wife, about your weaknesses, then you will be upset by this much more.

I will not hide, I am still being hit by assaults, becausethat I am open, there is plenty of information about me, and it's easy enough to spoil my soul. While I don’t know anything about my opponent, nothing but a faceless email and nickname. Unequal conditions are obtained. Therefore, I perfectly understand those people who lead a hidden social life, do not post photos, write very little about themselves on the site or in social networks.

And this still very interesting moment turns out -you get tired of defending and defending your views on life. Why someone decided that if I told about them, it means I still have to defend them. Although I’m just telling and I’m not forcing anyone to live like this, God forbid, I don’t need it at all. Yes, and if you think so, I would not blog, so in my life there would not be so much controversy and criticism. Who to argue with? I don’t need to go with friends / relatives, I don’t walk the streets either and don’t search for opponents, I don’t enter the discussion forums In general, a quiet and peaceful peaceful life. In real life, my environment is about 10 people in total, and on the blog 6000 comes every day

Moreover, criticism is better from close people.listen, only they know you for real and see the complete picture, and not from some stranger who has read a couple of posts (or simply just the name) and who has become an expert about you. And in general, what a way to indicate and climb, where they do not ask ...

I am also amused by carts about publicity. Like, if you put something on the network, then you have to listen to other opinions. Who owes something and why? Tell me, who in his right mind will post an article on the Internet to find enemies or criticism? Obviously, the authors of personal blogs are looking for like-minded people! Obviously, it is with like-minded people that one wants a club of interests to create and churn on similar topics. Obviously, if you write on a personal blog, in a personal space (and not on a forum with 100,500 users), this is exactly what you want, and it is this very personal opinion that limits your audience. Imagine people sitting in a cafe discussing the upcoming trip to the mountains, and then a stranger rolls over to them and says that he passed by, heard their conversation, and they don’t understand anything in this life, there are only 5 all-inclusive stars, and the hikes for rogue Crazy situation? Probably, they are not fools, since the campaign is being discussed, perhaps, for some reason, they need this, probably, they are adults with an opinion that has already taken place.

Life is life, and to not happen in the world,we must somehow live with it. The top bloggers in LiveJournal trolls are “our all”, because the more of them, the closer the TOP. It is enough to become scandalous or start writing on topical issues, and popularity / earnings are provided in a couple of years. In the sphere of individual blogs (like ours) comments do not bring any TOPs, in general, no. And why then do we need negative comments and unconstructive criticism, if there is no sense from them? I asked several bloggers how to be. It turned out that someone is facing the same problem, and someone, on the contrary, did not understand why it soars me, they say, ignore / ban everything.

You can stop writing personal or commentsdisable. However, this is not an option, because the very formation of a community of interests occurs. It is a pity that in real life it is impossible to meet as often as we would like. Some write, call for a visit, and certainly there are those who do not call, but also do not mind to talk. Hey, guys would hold some kind of joint activities. So great, when there is a big friendly company, sometimes we really lack communication on interests, lively and deep (when it’s not the first meeting with a person and not the second). Maybe a little later, when Egor grows up, we will get more in real.

So, my advice to novice bloggers - blogyour, your rules on it, ban / remove, weed out all unnecessary. Do not get involved in squabbles, do not waste your precious time, it is better to spend it with your family or with friends. Adequate person who has no desire to convince you at any cost, always express his opinion normally and you will have a wonderful dialogue. Checked more than once on this blog! Remember, it’s impossible to please everyone without exception, you lose your individuality. The main thing is to ban / remove with a cold heart

After all, trolls are a great way to pump Zen!

P.S. Ignore is a great thing! After I let go and stopped catching, almost all the trolls disappeared somewhere

P.P.S. As an option, do not write anything personal and focus on information, creating a purely informational community. This path is great for those who do not want to tie their resource on the identity of the author, but it will not be a blog.

Work in Thailand for Russians is another ...

Why travel by yourself