Yested TV Tower is very vivid, memorable andquite famous building in the town of Liberec. It serves as a television tower and hotel at the same time. The landmark is located on a hill (a little over a kilometer) and belongs to the category of places that are worth visiting only in good weather.

Unfortunately, my “viewpoint damnation”This time also manifested itself, so I will have to take pictures of the surroundings from the height of bird flight in the next race. The tower has received worldwide recognition among architects as an outstanding structure, and many praised for its design and aesthetics. And for how organically it fits into the surrounding landscape, and even call it a miracle of the Czech Republic.

As a person who traveled a lot of kilometersAsia, I reserve the right to be a little skeptical about the uniqueness of the Ještěd Tower. Or rather, in the originality of its form. As for me, it is a pagoda. Futuristic, modern, made of glass and steel, but - a pagoda. In Thailand, such miracles - ten pieces in each province. 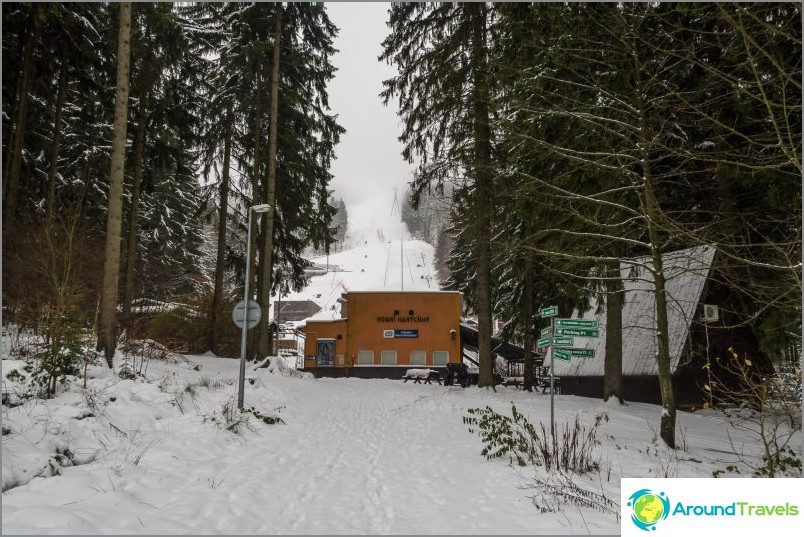 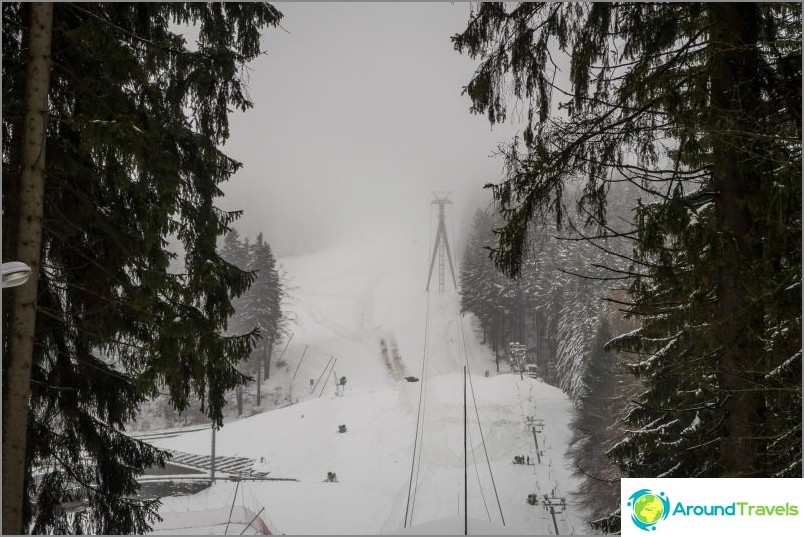 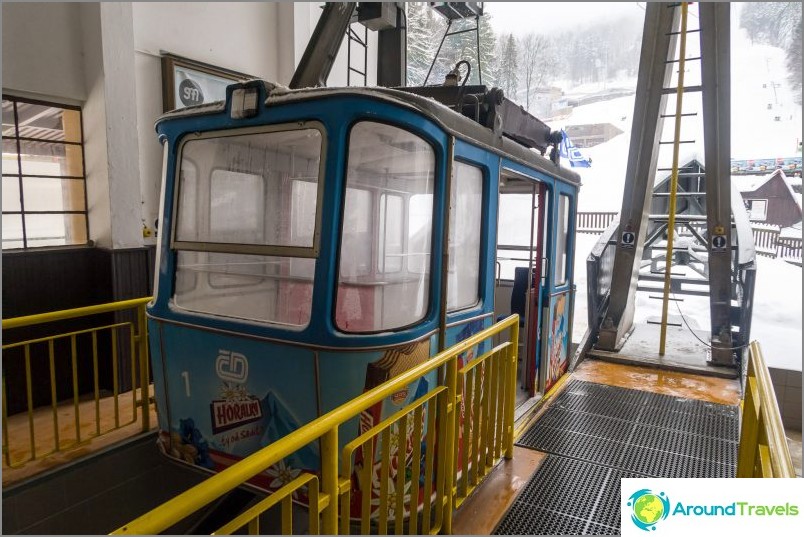 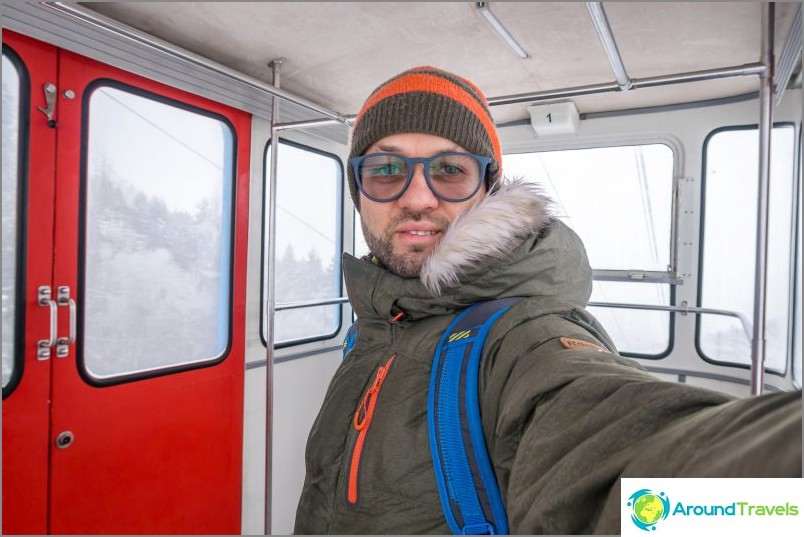 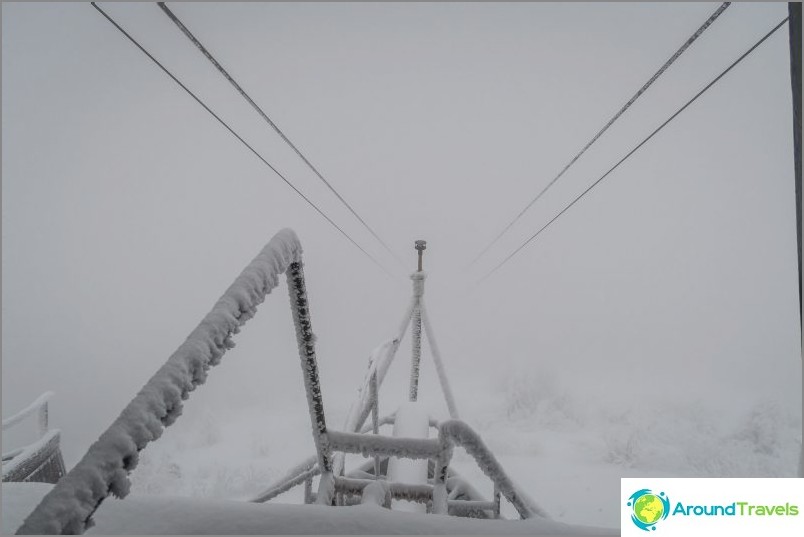 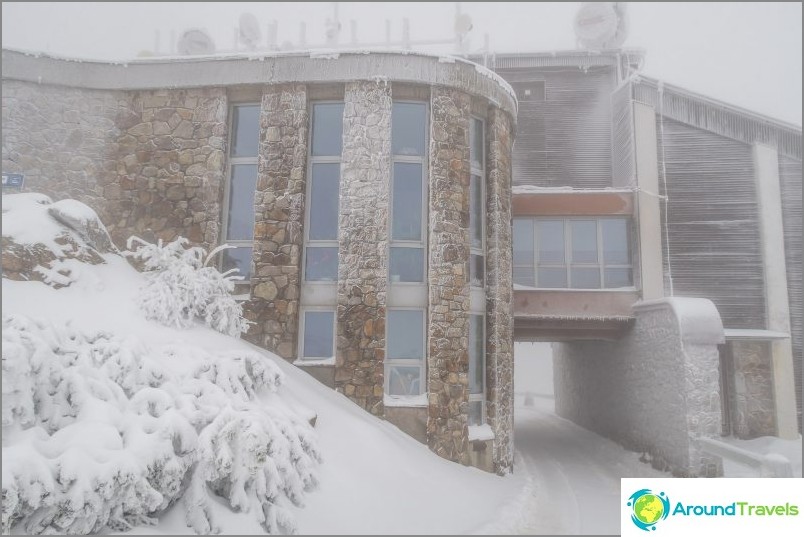 Climb the mountain with the tower-hotel Yested canin two ways: on the road on foot / by car, and - by cable car. Walking on foot is good only if you have free hands, and the weather allows you to turn your head and be touched by the magnificent panoramas of the mountainous Czech Republic.

To climb a car, you need to know thatThe number of parking places is limited, and you always have a chance to stay without it. And the road itself requires good driving skills and it is very narrow, in fact one-way. In winter, it will be difficult to disperse. 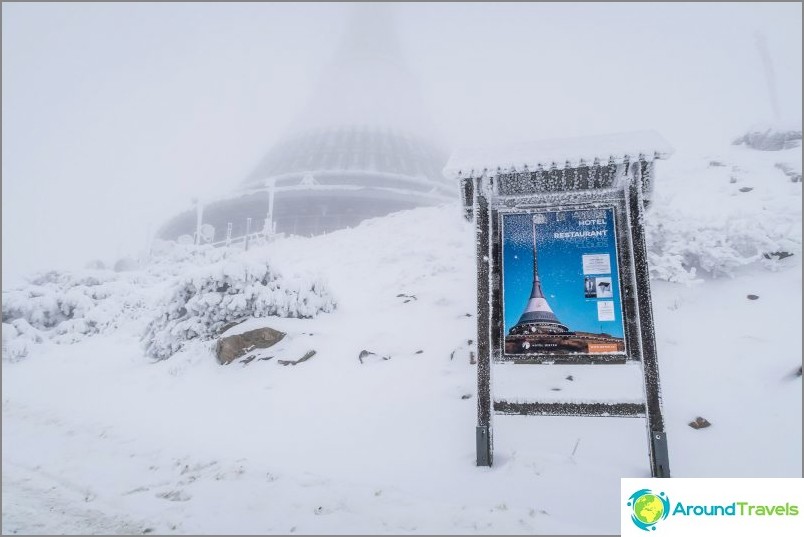 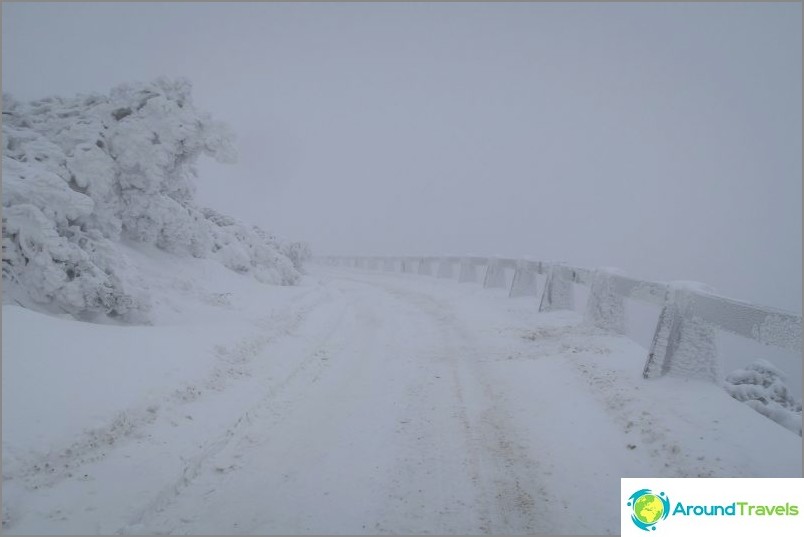 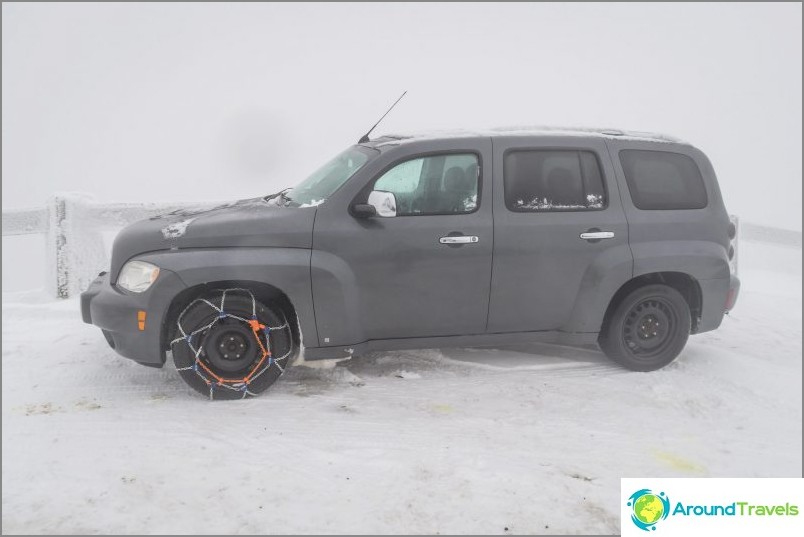 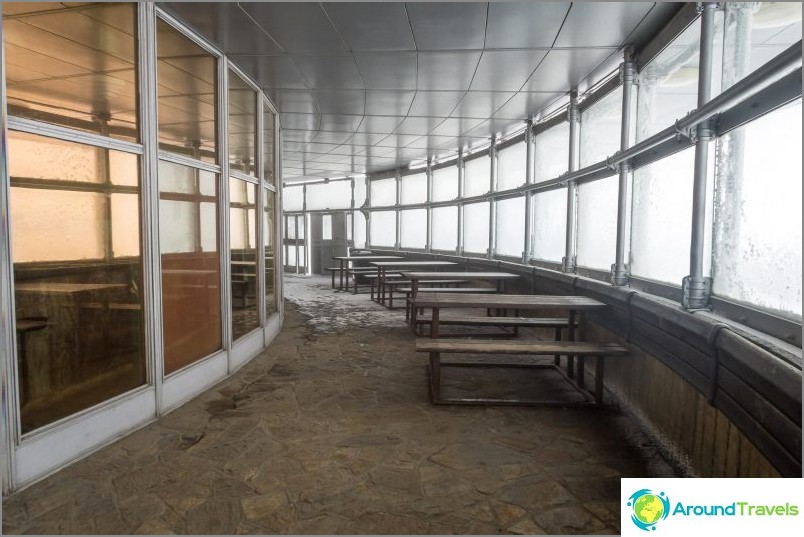 Option with funicular paid, but it is optimalfor any weather and amount of luggage. Every half hour, a small cabin crawls up the hill from which you can see the surrounding landscapes. In this case, you do not have to sweat from physical exertion. And the landscapes here are the very thing why it is worth coming here at all.

On the second floor of the tower Jested is located panoramica restaurant. With a slightly old-fashioned interior, slow and not very polite service, and mediocre quality of dishes. My shrudel might not have been fresh, I hadn't even finished. Of the available entertainment is hiking, but near the hotel-restaurant there is nothing more. The main feature of the restaurant is in the views from the windows, so people are not particularly outraged.

In addition to the restaurant there is something like a kiosk withsnacks and snacks on the viewing platform. There's even more budget than the main restaurant turns out. As I understand it, in the off-season it is closed due to unprofitability to keep an employee there. 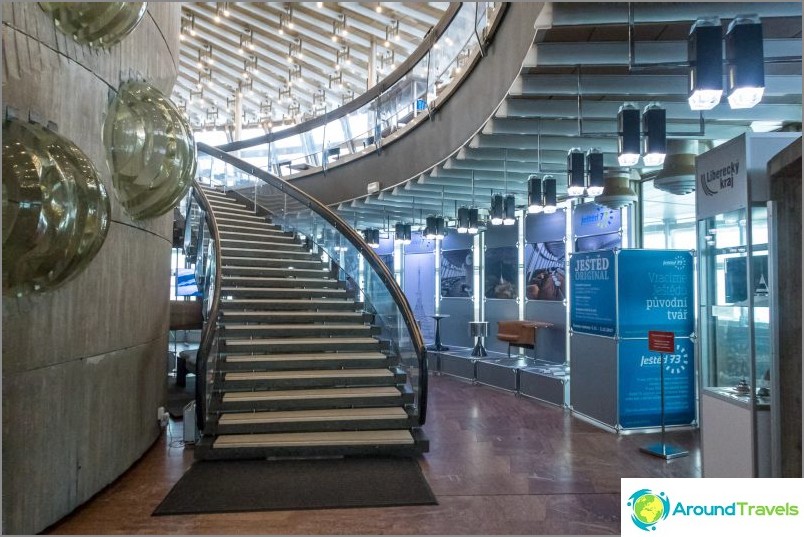 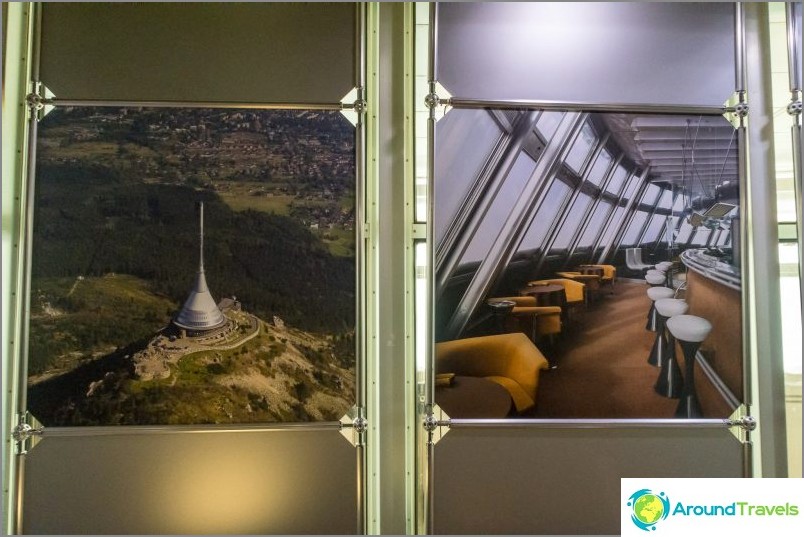 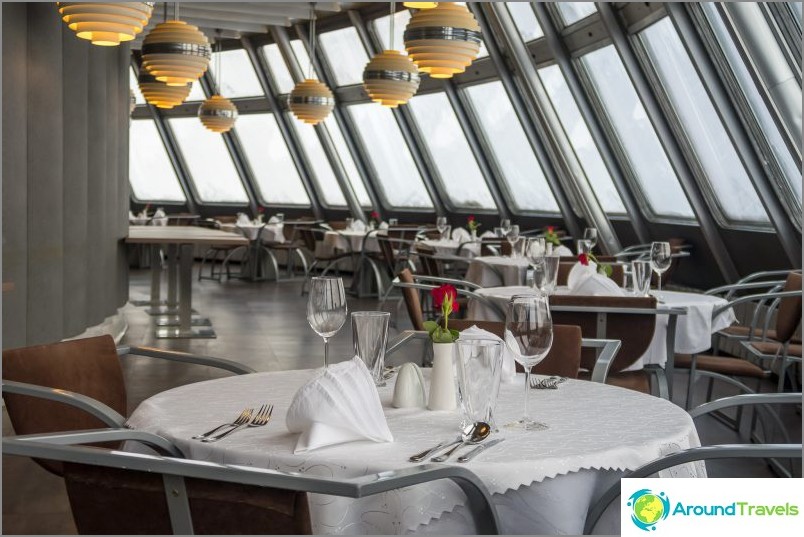 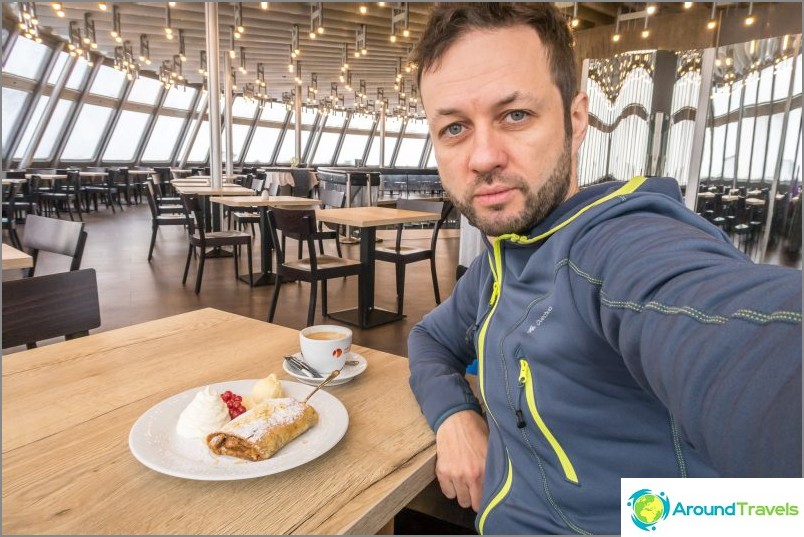 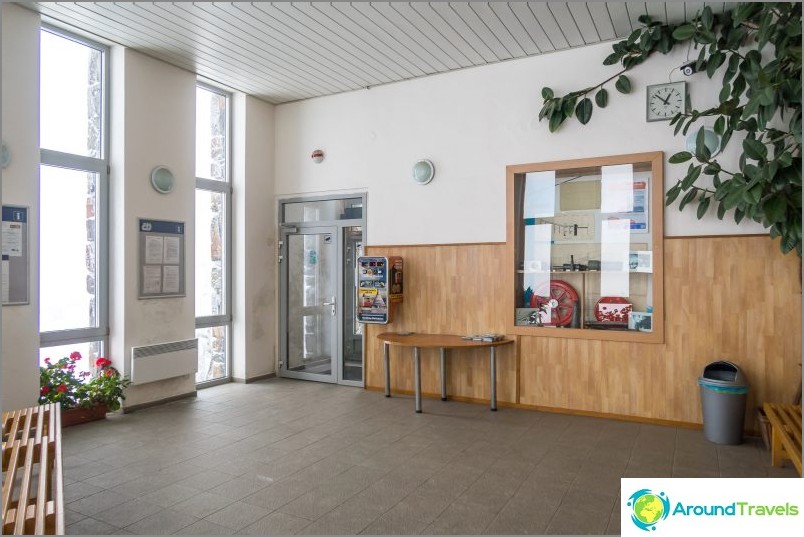 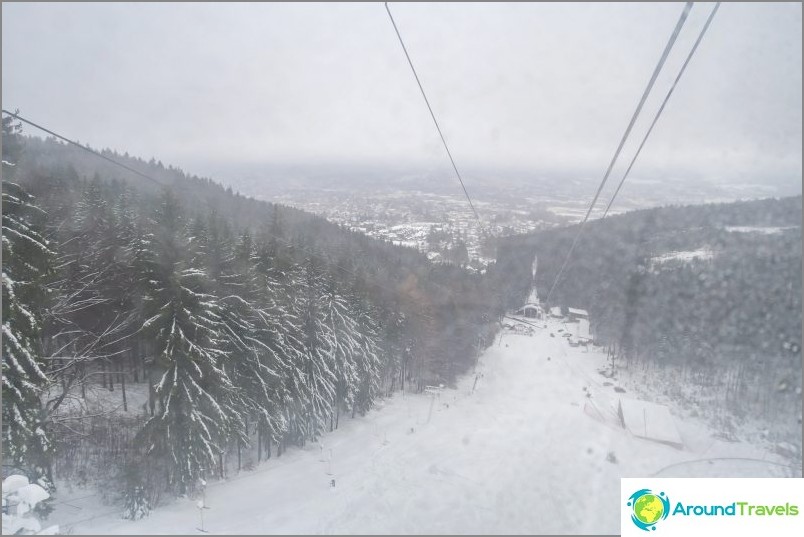 For example, here is a direct link to the hotel: Hotel Yested

located on the 5th 6th floor of the building, and indifference from the restaurant - the hotel and the room I really liked. It is strange that he is scolded in the reviews. As I was told, recently there was a renovation and the rooms were updated, and then everything is really new. Only 14 rooms, which differ in colors, but the meaning is the same. They try to make repairs in the style, as it was before, but the furniture is already modern.

Interior corridors and rooms repeats the mainthe motive is the cosmos and the future as it was imagined in the seventies. Now it all looks like retro, but still very interesting and unusual for a hotel.

As I understand it, in all this space hotelno air conditioning and no windows open. And the ventilation of the premises is carried out by a single split-system, which copes with its task completely - it was not stuffy. 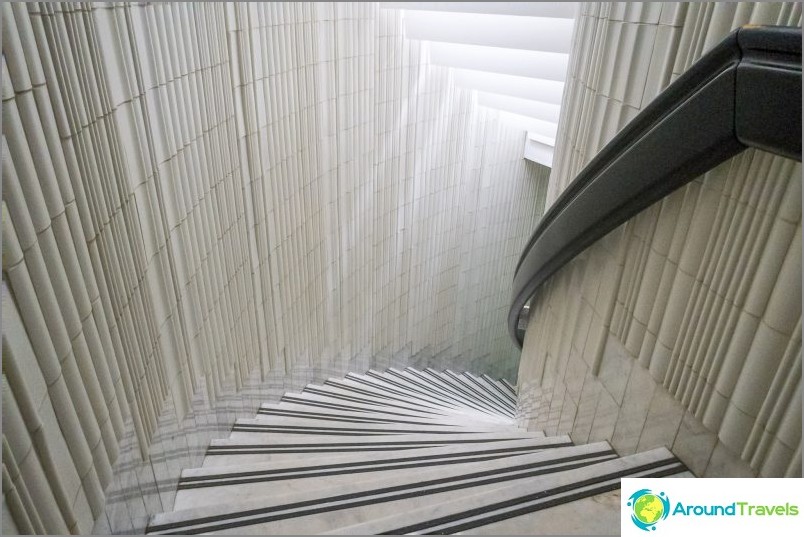 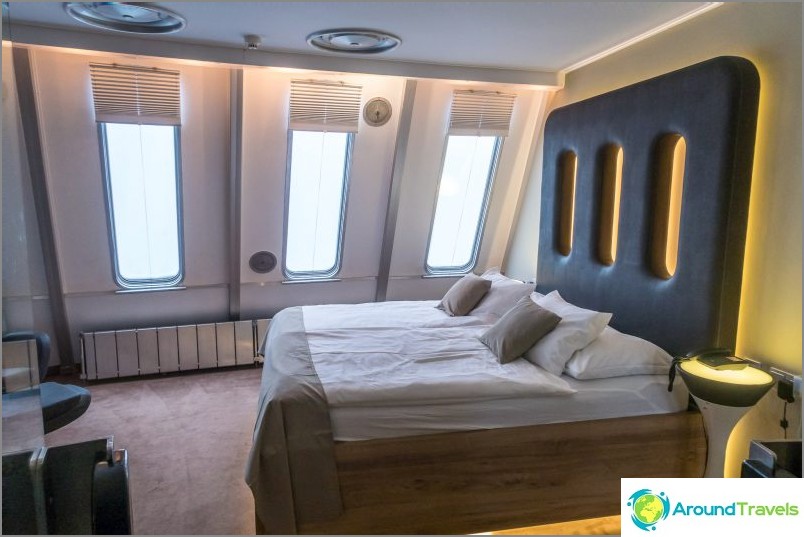 Bathrooms are not the most spacious, but on the wall opposite the toilet there is a detailed drawing-drawing of the whole tower. This somewhat lengthens the process of visiting the toilet, but makes it more informative.

Is it possible to arrange a romantic night in this hotel? Yes. And then they came up with great things with beds - they are higher than usual and it turns out that you can see everything that is outside the windows without even getting out of bed. 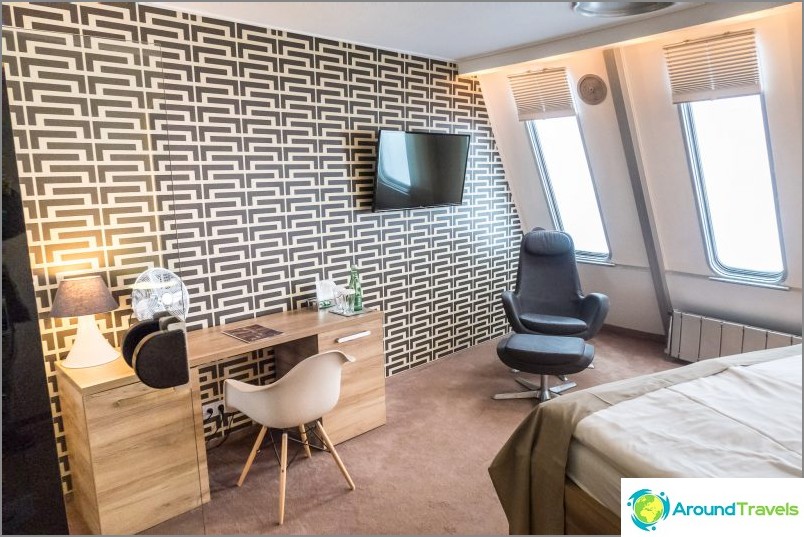 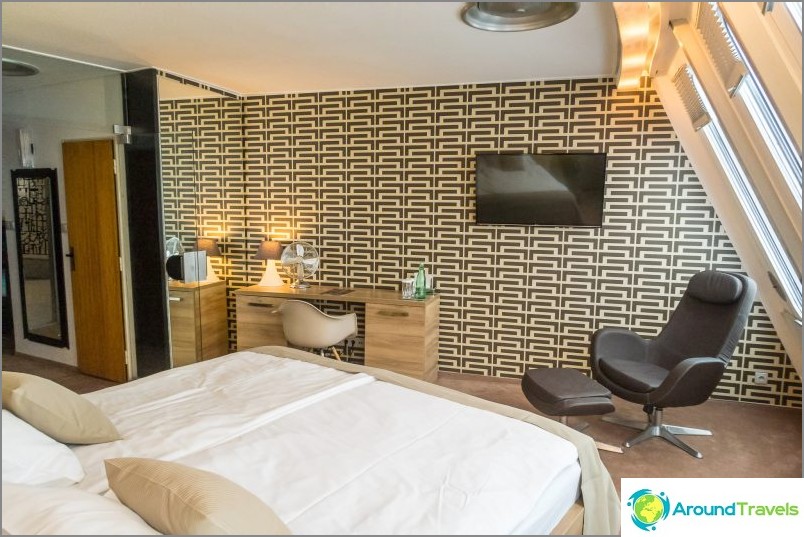 Well, not in my case, of course, but the idea itself -super for those who are luckier with the weather than me. Although that day when I was leaving, the sun came out (yes I am lucky), and the views were already excellent. For breakfast buffet is offered with not the largest assortment, and can pour a shot of pears, if in the morning you have this mood.

In the summer and when the ski season begins, the hotel underthe string is busy, and it is better to book a room in advance, for example - via this link. I myself think to try to come here again in the summer. In winter, the window in the snow and there is fog, so little is visible. 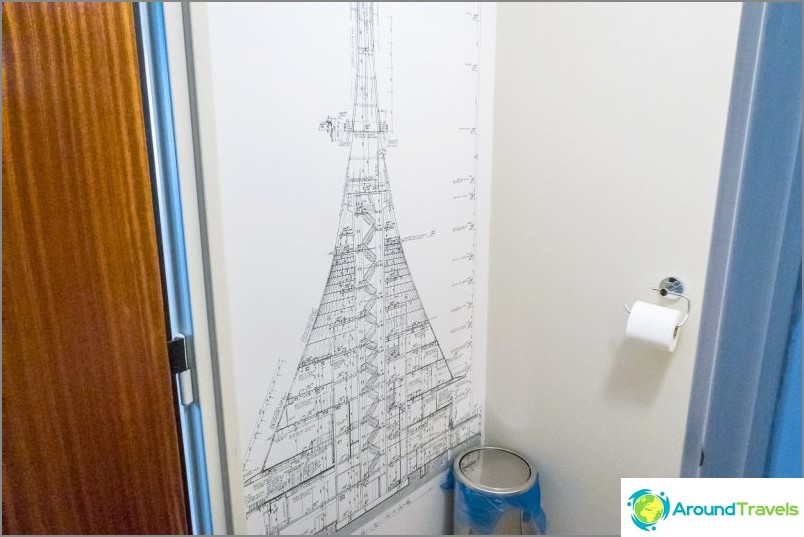 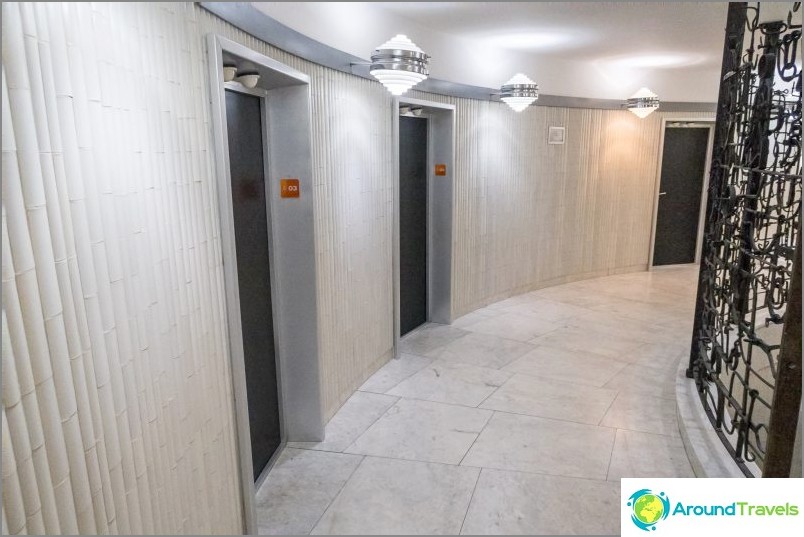 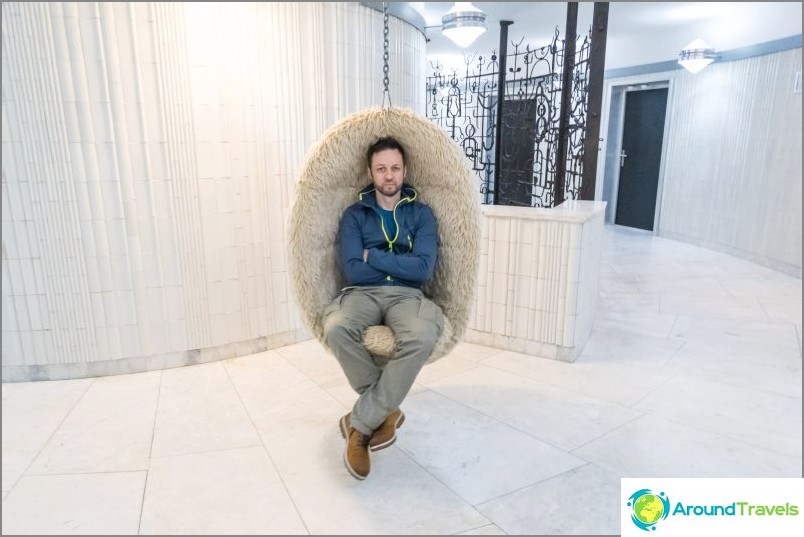 Three years after a historic hotel built in 1907 burned down on Mount Yeshted, the Czech government initiated a competition to create a new architectural landmark.

According to the results of the competition won the project KarelGubachek, who proposed to build a building with a height of almost 100 meters. The futuristic lines of the Yoshtedskaya TV Tower impressed everyone so much that the tower became a symbol of the city of Liberec, and in 2006 it was given the status of a national cultural monument.

Parking at the funicular costs CZK 100 per day.

In winter, you are more likely to get into inclement weather with limited visibility due to clouds. But if you catch the sunny days, you will see that the winter landscapes are incredible, fabulous, very beautiful. 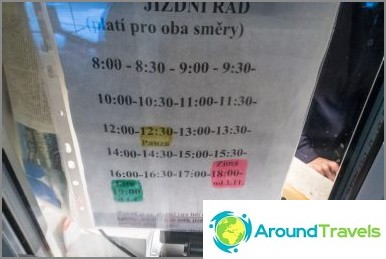 Schedule of the funicular and its prices 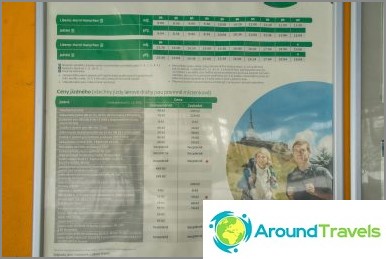 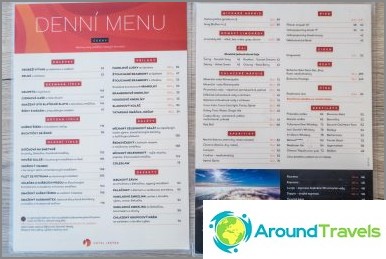 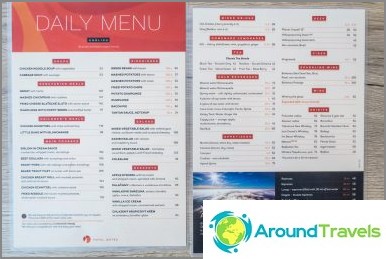 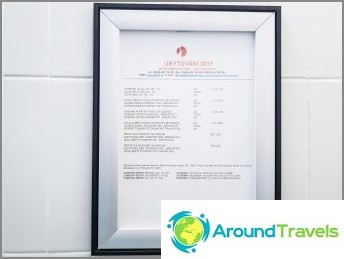 Price for accommodation in hotel Jested

Hotel Yested
Hotel Jested. Quite expensive hotel, located inside the television tower. But romantic, from the window overlooking the mountains in good weather. The design is also interesting. 1-2 nights. The most important hotel in the city.
More about the hotel. 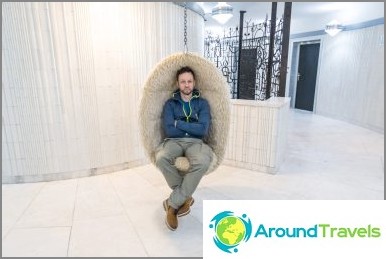 Hotel Jested. Quite expensive hotel, located inside the television tower. But romantic, from the window overlooking the mountains in good weather. The design is also interesting. 1-2 nights. The most important hotel in the city. More about the hotel.

The best hotel in Sanya by price combination ...