Kathu Falls in Phuket is a generally pleasant place. I say this because if you pay attention to the details and nuances, then the content of the tourist attraction raises questions, of which "how can you be lazy" or "really there is no money for cleaning" are the most harmless ones. Yes, there is no feeling of a tourist attraction, when everything is put on stream: paid parking, walking elephants, at every corner sell trinkets at an exorbitant price, and crowds of Chinese are scampering everywhere - there is no such thing on Katu. Obviously, the place was created on a large scale, and then forgotten.

If this is a private area, as is often the casein Thailand, it is possible that the owner either lost interest in the process, or died. Actually, therefore, the stairs throughout the site are already mossy, and near the waterfall across the stairs lies a fallen tree. I do not exclude that once they could have taken money for input, although now it is not clear what to take there. There are a lot of ugly cement parts, a track through the wet jungle, the dubious aesthetic value of the waterfall itself is, to put it mildly, an amateur.

Kathu Falls is located near Patong, goit is easy to get here, it is easy to get to the waterfall itself (if you are in a more or less decent physical form) and you can come here to walk through the jungle or swim in fresh water. First of all you will get to the parking lot, where you will leave the bike and immediately after the parking there begins a concrete, good staircase, wide and with handrails. It looks very colorful against the background of the jungle, due to the fact that it is overgrown with moss and grass, and the cement shows that it is already old and green.

Climb the stairs to be about 10-15minutes, although the speed depends on your physical data. Approximately in the middle of the way there will be a rather large sanitized playground with two lats (these are gazebos without walls and with roofs) and a small waterfall about 5 meters high. Water accumulates in the concrete tank from which the valves stick. Never aesthetically, it is possible that this reservoir is used as a source of water for nearby houses. 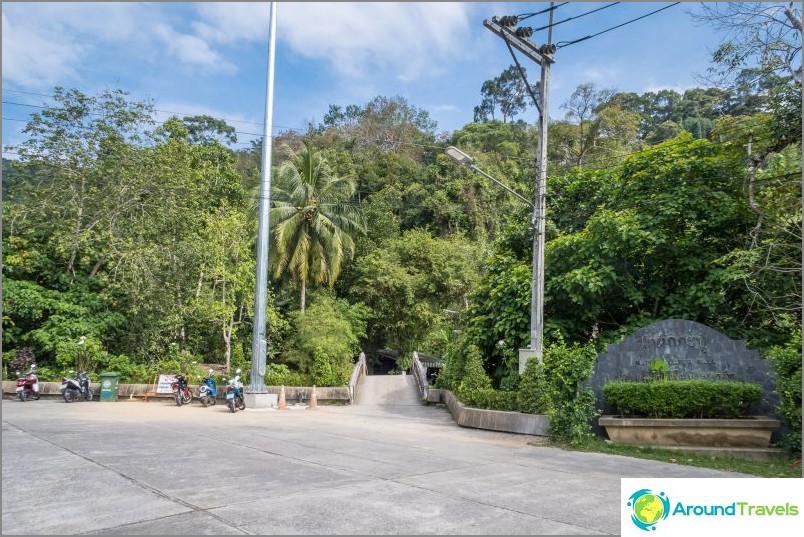 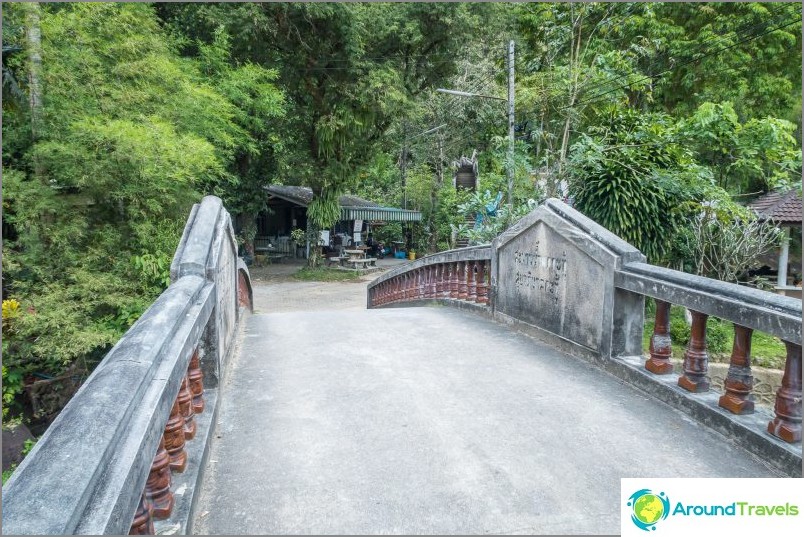 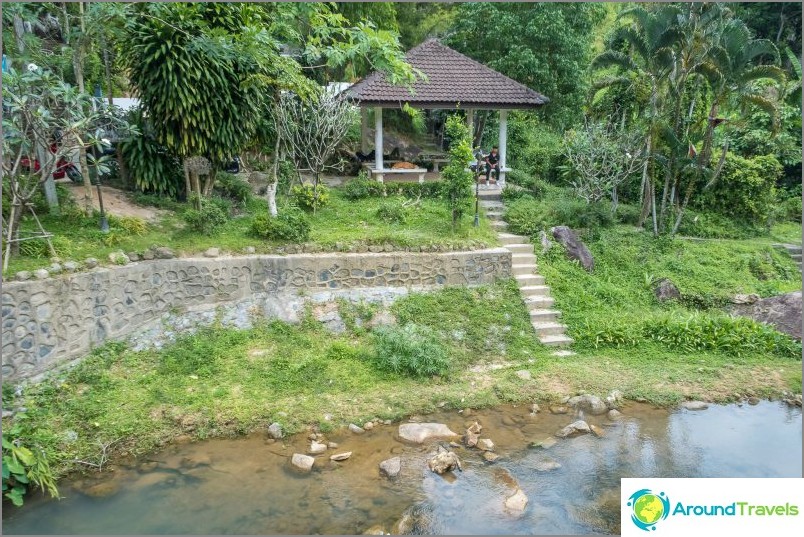 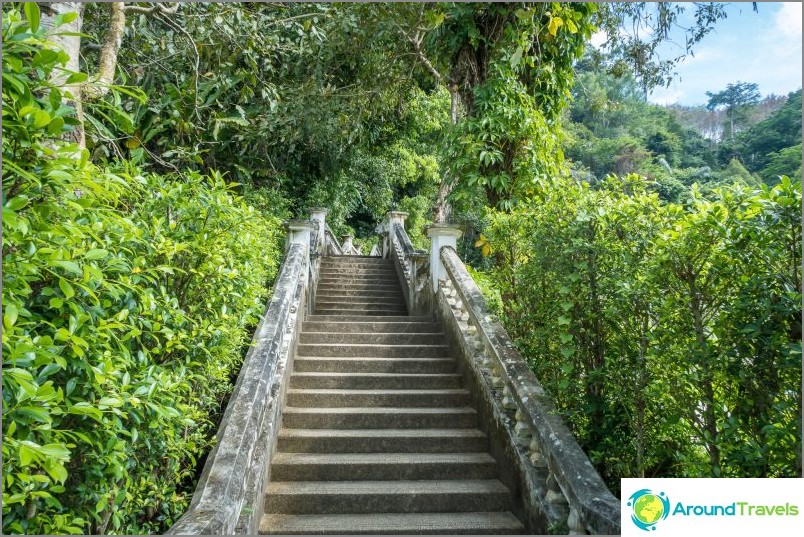 We go to the waterfall stairs 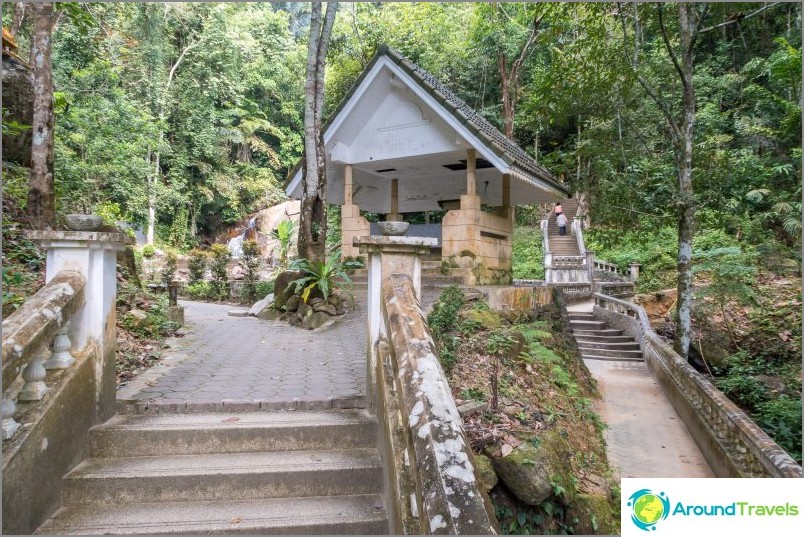 To the left, towards the Kata Falls, to the right, up the river bed 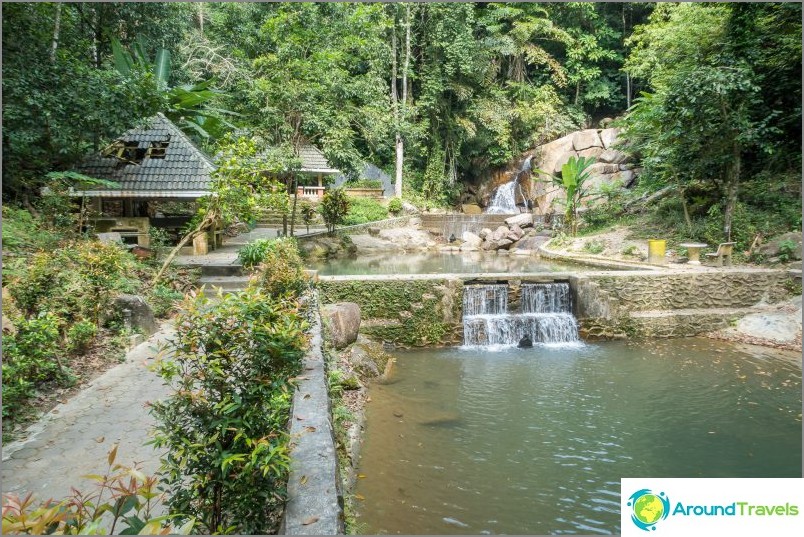 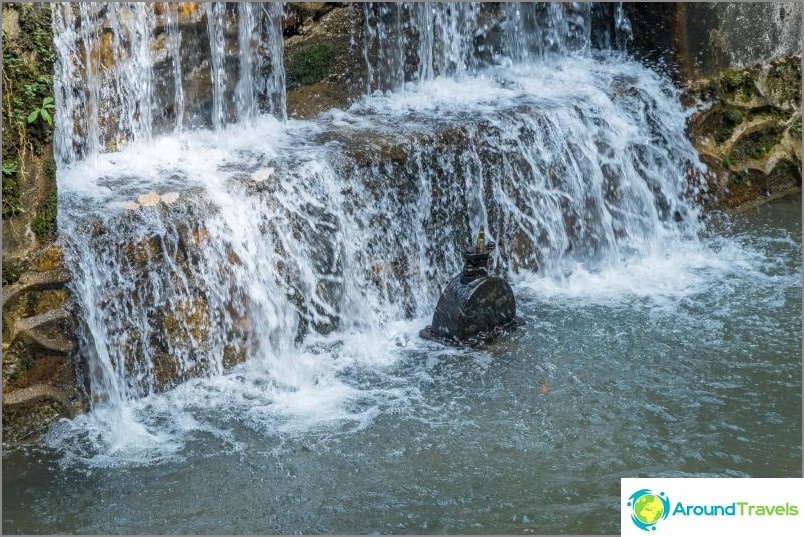 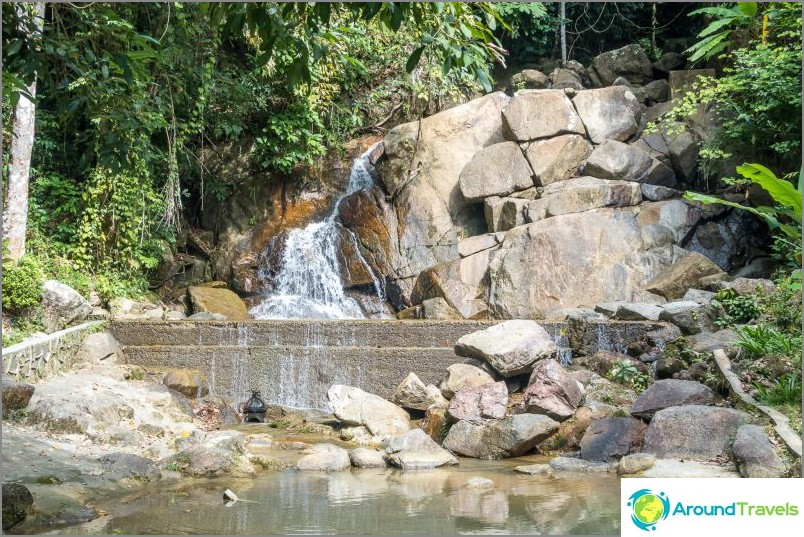 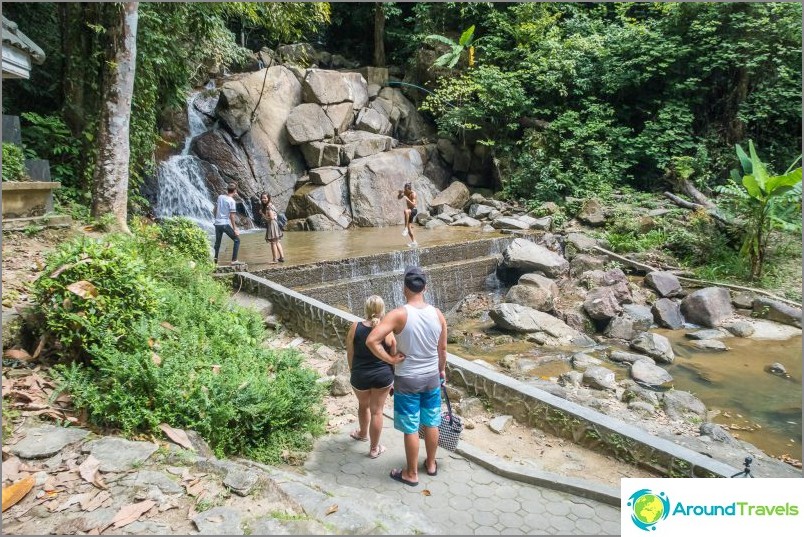 If you climb even higher, then there will be a wildwaterfall, a height of not more than ten meters - here you can swim. Also, on the way to the Kata Falls, in one place there will be a path that leads to the river, and there will also be a font.

So that you understand: the stairs all the time goes along the river bed. I want to say right away that the fonts are shallow, so swimming is loudly said, rather take a dip and refresh yourself, but don't exactly jump in the fish. After the extreme waterfall, which I described, the staircase goes even higher, but it does not make sense to climb there, because after a short period it ends in a dead end. The path goes into a dirt path and there seems to be hope that you are about to finally see a really good waterfall, but there is nothing at all - just the riverbed, font, stones and water. You can walk if you have a mood, but do not expect anything special. 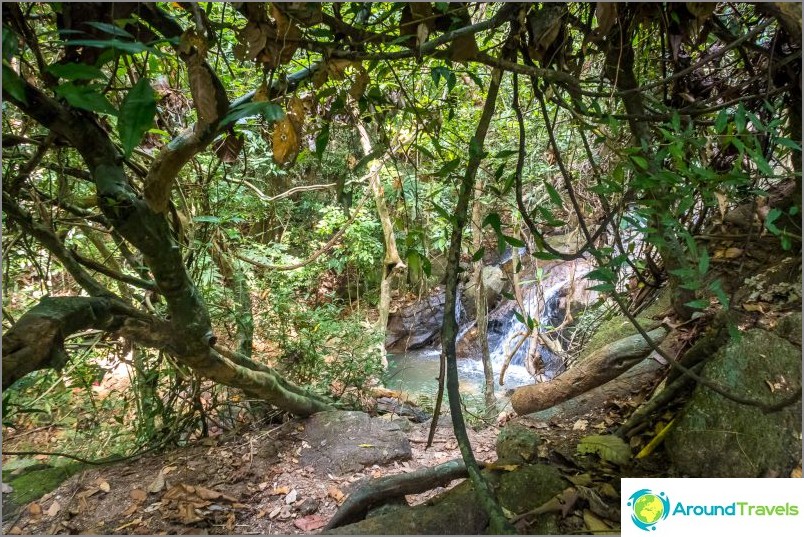 Font along the way 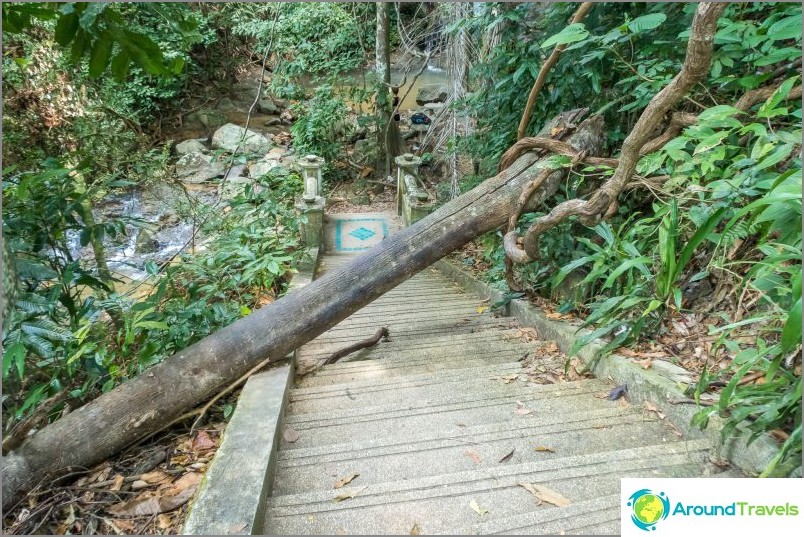 From the stairs to the wild cascade leads another staircase, but already down 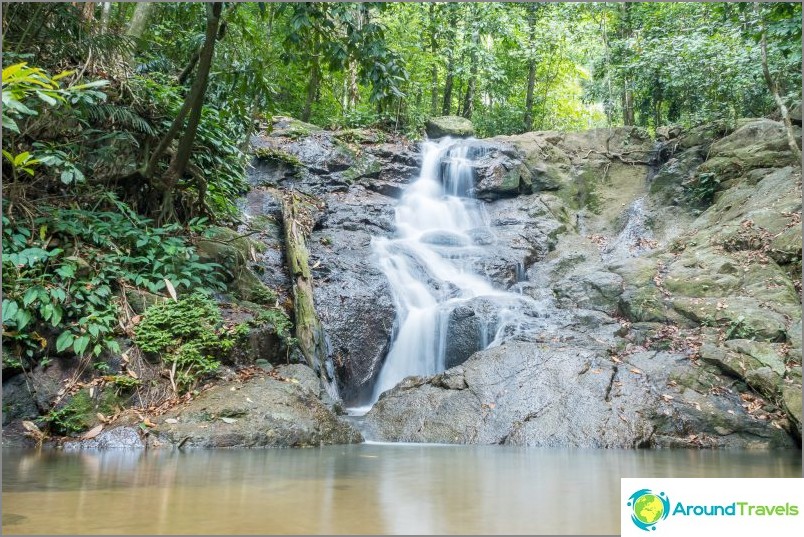 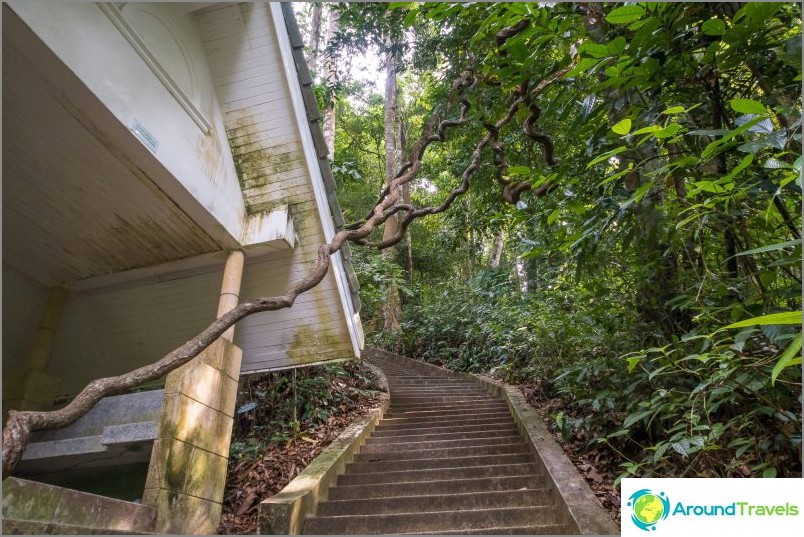 We go even higher 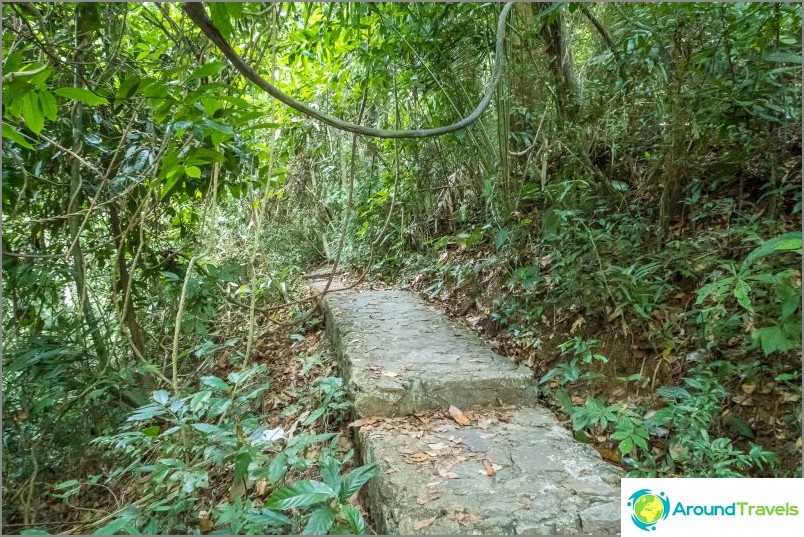 After 5 minutes the trail ends 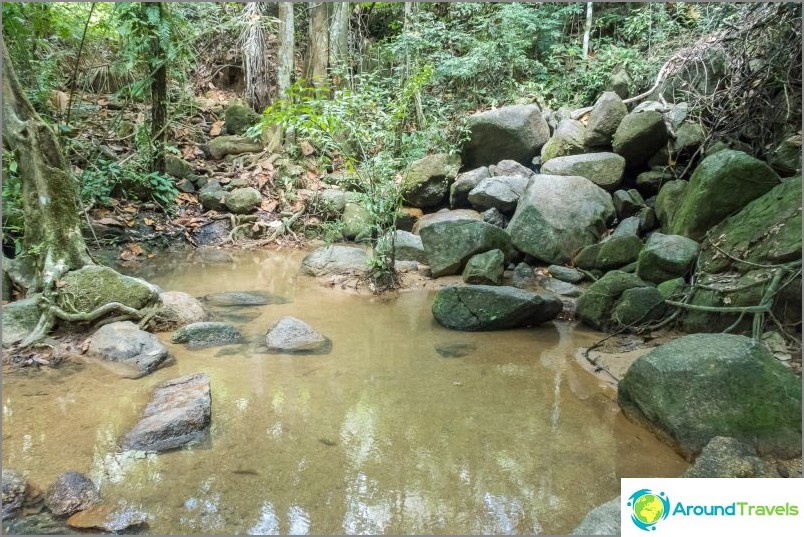 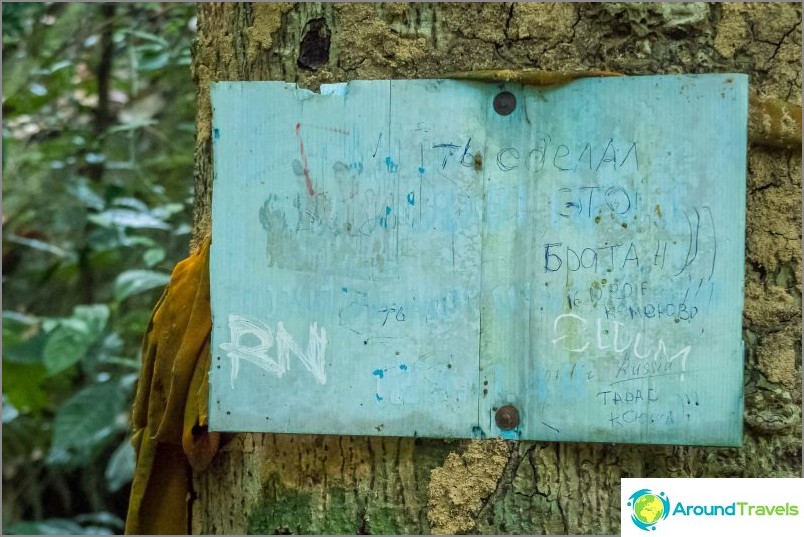 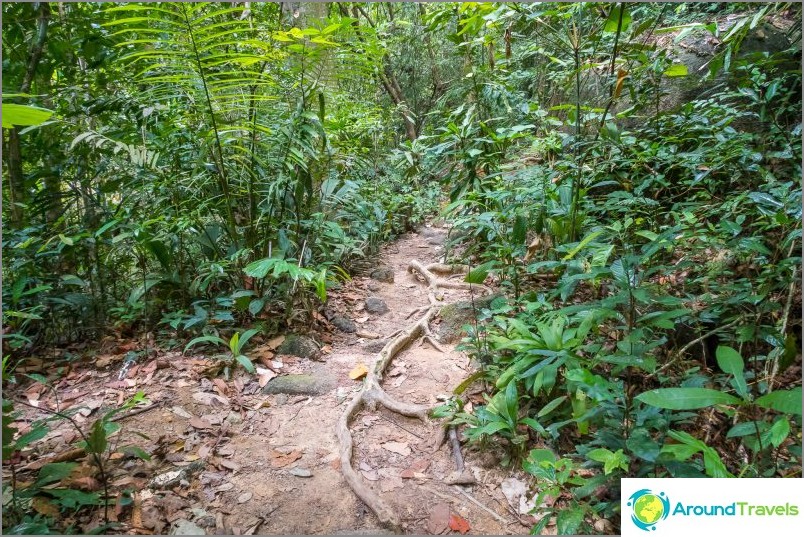 But I am stubborn, went even further 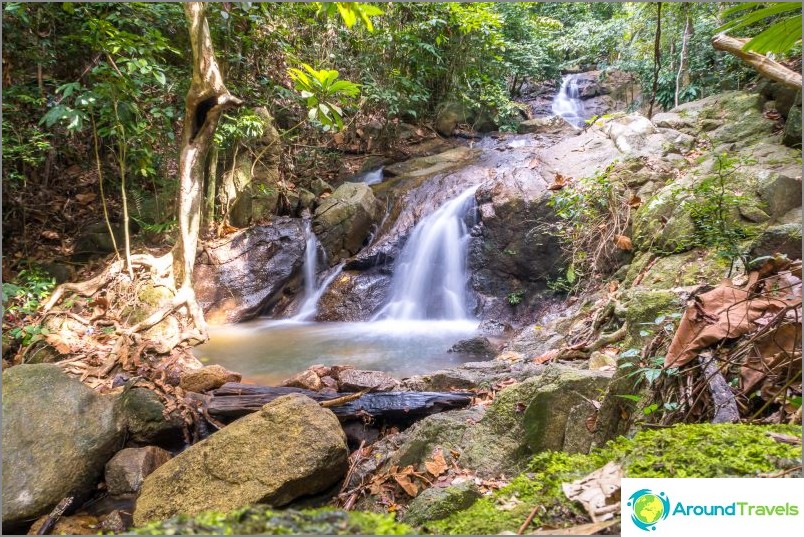 A couple of minutes and such a nice place

Why did they make the stairs further and cut the path? I don't know. Maybe they planned to carry out even further, perhaps in the depths of the mountains there is another cascade.

There is such a moment that this waterfall makes senselook after the rains. Because he is already short and thin. During the heat, he is most likely a sad sight. I was at the Kata Falls not in the driest time, but not in the monsoon season. Therefore, what he is, you can see in the photos.

Admission is free, parking too.

Cumulatively for the entire visit, if you don’t specifically brake anywhere, you will need about half an hour. If you want to sit somewhere else to relax, then more.

The territory is densely covered with jungle, so onThe trail is very hot and humid, you should grab water with you. Along the way, snakes, monitor lizards and spiders are often found. After the rainy season, landslides occur, the trail can flood or erode, trees often collapse, blocking the passage. If you walk through the jungle, look carefully at your feet and in front of you. To step on a scorpion or to imprint your face on a spider the size of your head is easy.

Katu Waterfall
It is located here, for some reason on the maps, it is 1 km to the left of the meters.
More about the waterfall. 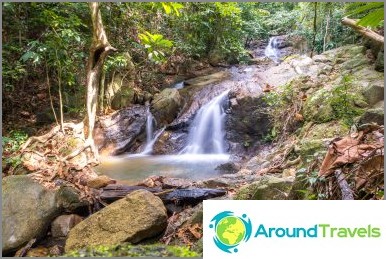 It is located here, for some reason on the maps it is 1 km to the left of the meters. More about the waterfall.

Renting a scooter in Thailand - do you need ...