It is interesting to live - an interview for Perekrestok newspaper

When we were in Belaya Kalitva, we were interviewed for the local newspaper Perekrestok. Here I give you his text. There, and about my wife and me and a little about the project "Russia for 365 days." In my opinion, quite interesting happened. 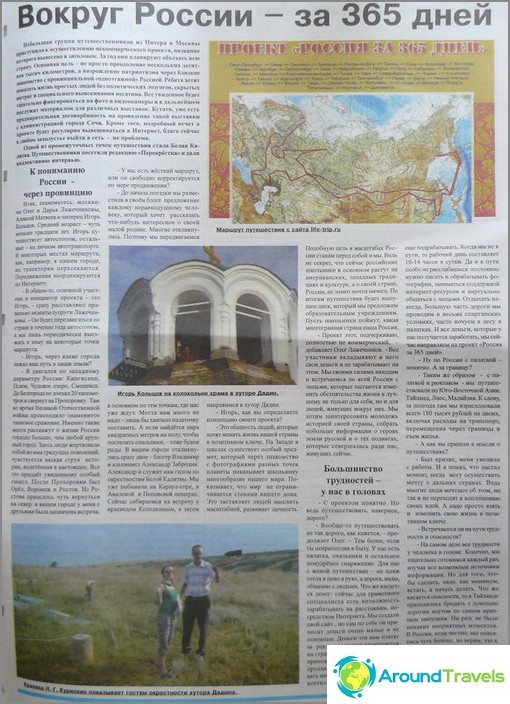 Interview to the Crossroads newspaper

A small group of travelers from St. Petersburg andMoscow has launched a non-commercial project, the title of which is in the title. For the year they plan to drive around the country. The main goal is not just to overcome several tens of thousands of kilometers, but a revival of patriotism through a close acquaintance with provincial “one-story” Russia. The guys want to show the life of ordinary people without political slogans, hidden intrigues and a special search for negativity. Everything seen will be carefully recorded on the photo and video camera and will later serve as material for various exhibitions. By the way, there is already a preliminary agreement on holding such an exhibition with the administration of the city of Sochi. In addition, a detailed report on the project will be regularly posted on the Internet, the benefit now in any backwater to go online is not a problem.

Belaya Kalitva became one of the intermediate points of the trip. Travelers visited the editorial staff of “Crossroads” and gave a small collective interview.

Understanding of Russia - through the province

So, get acquainted: Muscovites Oleg and Daria Lazhechnikov, Alexei Matveyev and Petrograd Igor Koltsov. The average age is a little less than thirty years. Igor hitchhiking, the rest - on his own car. In some places of the route, such as in our city, their trajectories intersect. Movement is coordinated by the Internet.

- In general, the main participant and initiatorThe project is Igor, - right away the accents of the Lazhechnikov spouse are immediately set. - He will travel around the country during the year by hitchhiking, and we only periodically go to him at some points of the route.

- Igor, through which cities did your path lie in our lands?
- I was moving along the western perimeter of Russia: Kingisepp, Pskov, Lake Peipsi, Smolensk. I did not reach 20 kilometers to Belgorod and turned onto Prokhorovka. There, during the Great Patriotic War, the famous tank battle took place. Such places will tell about the life of Russia much more than any large city. Here, people sacrificed themselves in the name of future generations; a viscous current of history woven into the present is felt. All this gives what he saw a special meaning. After Prokhorovka was Eagle, Voronezh and Rostov. From Rostov I had to return a little to the north: I had an appointment with my friends in your city.

- Do you have a hard route, or is it freely adjusted as you progress?
- Before the trip, we posted on our bloga proposal to every caring person who wants to say something interesting about his small homeland. Many responded. Therefore, we move mainly to the points where we are already waiting. We don’t need much space - it would be where to put a tent. And if there is a couple of square meters on the floor to make sleeping bags, we will be happy too. Two people responded to your city at once - the climber Alexander Zabrodin and the blogger Vladimir. Alexander and serves as our guide for the surroundings of Belaya Kalitva. We have already visited the Guard Mount, in Avilova and Popovskaya caves. Now we are going to meet with the local historian Kolodkin, and then we will go to Dyadin farm.

- Igor, how do you define the concept of your project?
- This is a community of people who want to change their lives.our country in a positive way. In the West, there is a special subject in schools which, through acquaintance with photographs of different points of the planet, shows the diversity of our world to a schoolboy. Shows that the world is not limited to the walls of your home. It makes people think big, develops personality. In Russia, we set a similar goal for ourselves. After all, it is no secret that now Russian schoolchildren mostly grow up in American and Western traditions and culture, and they know almost nothing about their country, Russia. Following the trip, a disc will be released, which we will offer to educational institutions. Let the schoolchildren understand how many-sided our country is Russia.

- This project, I emphasize, is not fullycommercial. - adds Oleg Lazhechnikov. - All participants invest their money in it and do not earn on it. We find and meet across Russia with people who are trying to change the circumstances of life for the better, not only for themselves, but also for people living around them. We want to interest young people in the history of their country. We want to collect more information about the heroes of the Russian land and about the exploits that were committed for us who live now. 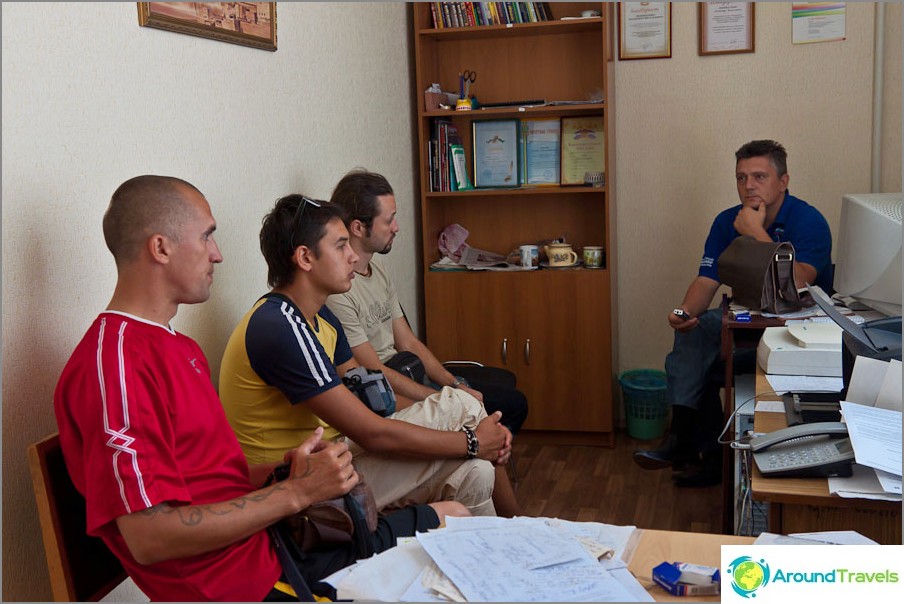 Interview to the Crossroads newspaper

Most difficulties are in our heads

- I understand the project. But travel is probably expensive?
- In fact, travel is not as expensive asit seems. - Oleg continues. - Especially if you are unpretentious in everyday life. We have a tent, sleeping bags and the rest unintelligent equipment. For my wife and I, the journey is not a hotel beach and beer in hand, but a road, views, communication with people. As for money: now for a competent specialist there is an opportunity to earn at a distance, through the Internet. We have created a website, but by itself it brings money very small and not basic. This money we pay for advertising, which is placed on the pages of our blog. Plus, you have to write articles to order, sell photos, teach English, draft ventilation and heating projects, somewhere else to earn money. When we are not on the road, the working day is 10-14 hours a day. And on the way, you will not relax too much: you need to constantly write and process photos, support Internet resources and virtually communicate with people. There is no time to rest. Most of the way we spend in very Spartan conditions, often spending the night in the woods in tents. And all the money that we get to earn, we now send to the project Russia for 365 days.

- Well, in Russia with a tent - of course. And abroad?
- In the same way - with a tent and a backpack -we traveled in Southeast Asia: Thailand, Laos, Malaysia. By the way for six months there we spent only 180 thousand rubles for two., Including the cost of transportation, moving across borders and renting housing.

- How did you come to think about travel?
- There was a crisis, I was fired from work. And I realized that the moment came when I could fulfill the dream of distant countries. After all, many people dream about it, but never go to the embodiment of their ideas. But you just have to take and change your life in a positive way.

- Are there difficulties and dangers on the way?
- In fact, all the difficulties in a person's head. Of course, we carefully prepare each time, studying all possible sources of information. But in order to do that, you must at least get up and start doing. As for the danger, in Thailand one had to wander with a rather expensive laptop in the darkest alleys. There have never been any unpleasant moments. In Russia, to be honest, we fear a little more, but we believe that to a person who carries good in his heart and everyone he meets will respond with good.

The author of the article is Vladimir Popryadukhin.

We returned to Moscow and went to live ...