The observation deck Rose Peak is located onthe territory of the Rosa Khutor ski complex, at an altitude of 2320 meters - the top of the mountain range Aibga. Not the most important one, as I understood it, because in the neighborhood there is also the top of the Stone Pillar as much as 2509 meters high, where the lifts no longer go. At Rosa Pik, people are unloaded to roll down one of the two slopes of the ridge. Even those who do not consider themselves to be an athlete and came to Rosa Peak in ordinary clothes have something to do.

The first is the restaurant "Height 2320", and the second isviewing platform Rose Peak. You can still gaze at people with skis and snowboards or touch a special mountain technique that paves the route, but most importantly, why people come here - beauty.

I told about the restaurant in more detail and with photos in another article, but about Rose Peak I can write the following: if the sky is covered with clouds, it is not necessary to go here for beautiful views. Yes, this is a terrible banality, but we are all human, and usually hope for the best outcome, even in the most unfavorable situation. As in my case, when the first four days of my arrival were rich in rain, fog and overcast skies. I went up to Rosa Pik more than once, but I deliberately staggered without equipment, gaze at the views and drink tea in a restaurant - I escaped only once.

And already from the Olympic Village I was clearthat above, most likely, there is nothing to do, and even if Rosa Pik broke through the clouds, then nothing will be visible from top to bottom. However, the Russian-Israeli accident prevailed, and I went to the funicular. The whole climb took 30 minutes with one change from strength, and I was very happy - some terribly sweaty comrades were driving with me (winter, a lot of skiers). Having intercepted fresh air and crowded with the athletes in the queue (in the morning there are really crowds of people like the subway), I went out at the top, near the restaurant Height 2320. The observation deck Rosa Pik is located behind the restaurant.

Large space with railings and woodenflooring built on the edge of the cliff I have not seen. The hopes that the clouds would dissipate with the morning sun did not come true, and I had to be content with two figures of a snowman with skis and a board, as well as a scheme of the Caucasus Mountains. I, of course, did not give up so immediately and spent another hour and a half in the restaurant, drinking tea on the grass and glancing out the window at the dazzling white snow. I did not wait, I was upset and moved back to the elevator, which slowly crawled down and after ten seconds I suddenly found myself under the ceiling of gray clouds - and here I got my panoramic view of the ridge and valley. Even without tops and snatches - it was awesome!

In winter, there are mostly not looking, butskating, still a winter resort. It seems to me that it is in the winter, very few people come here for a walk. And housing prices are more expensive, and people really can have a lot, especially on the days of events. 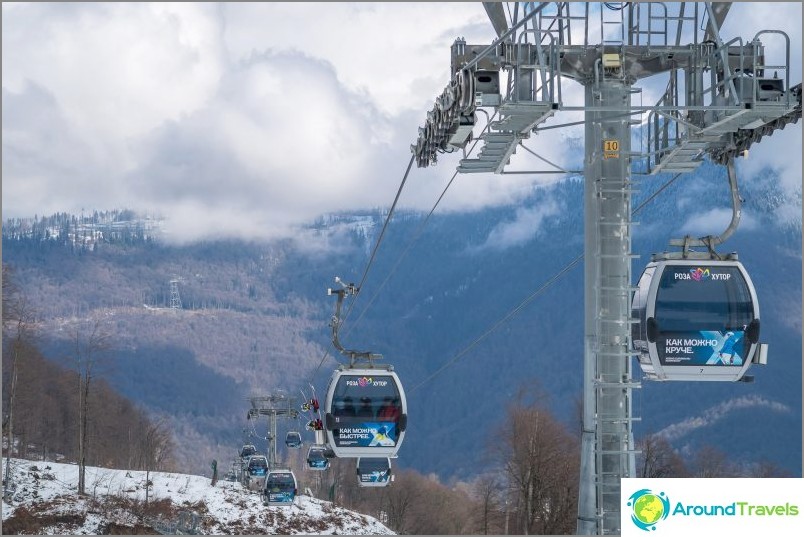 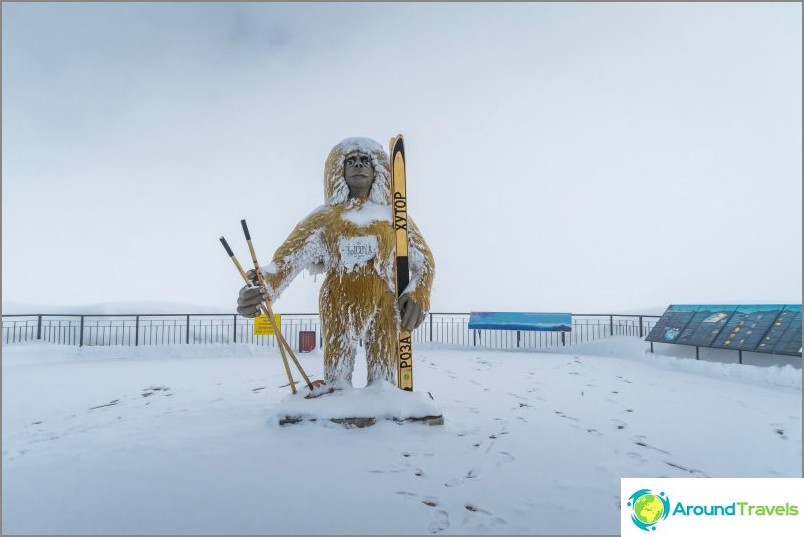 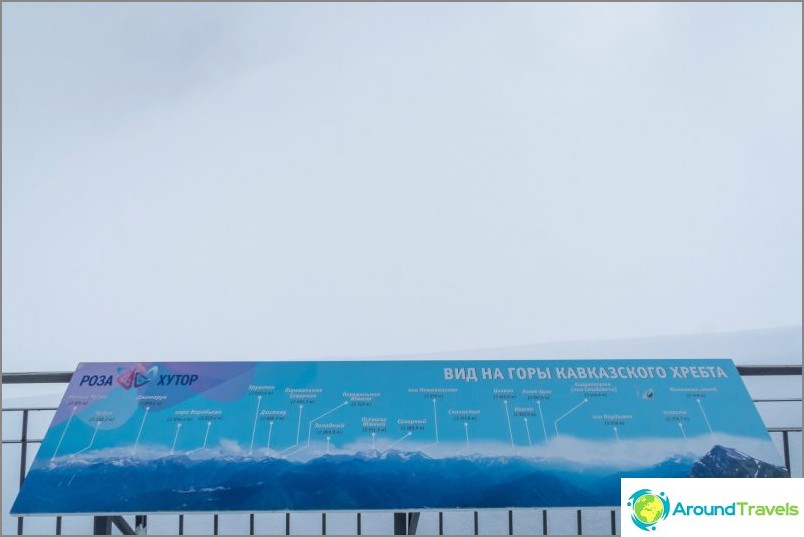 Behind must be seen Caucasian ridge 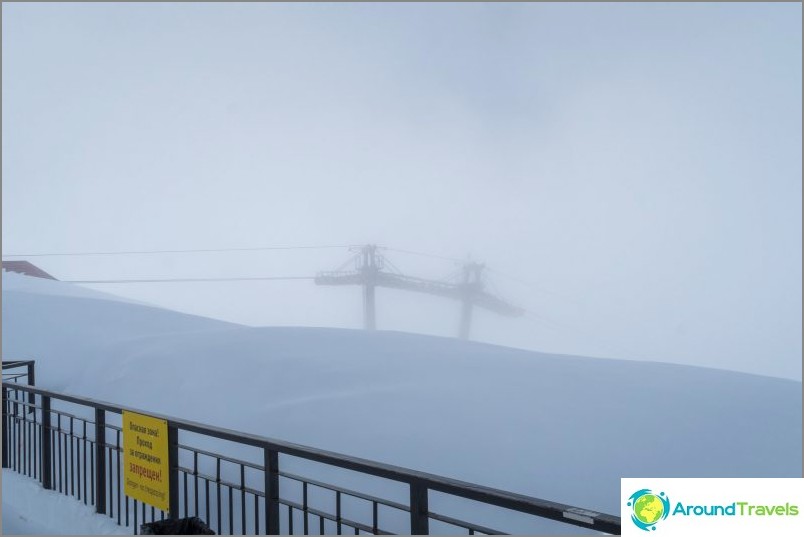 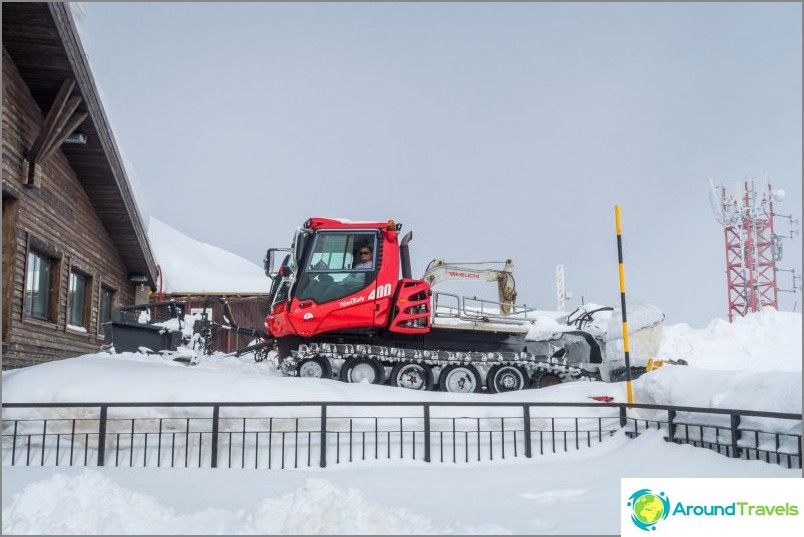 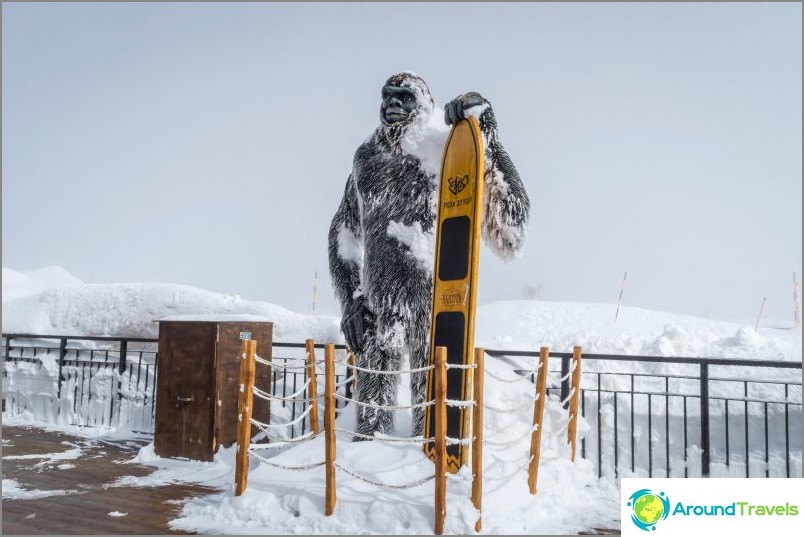 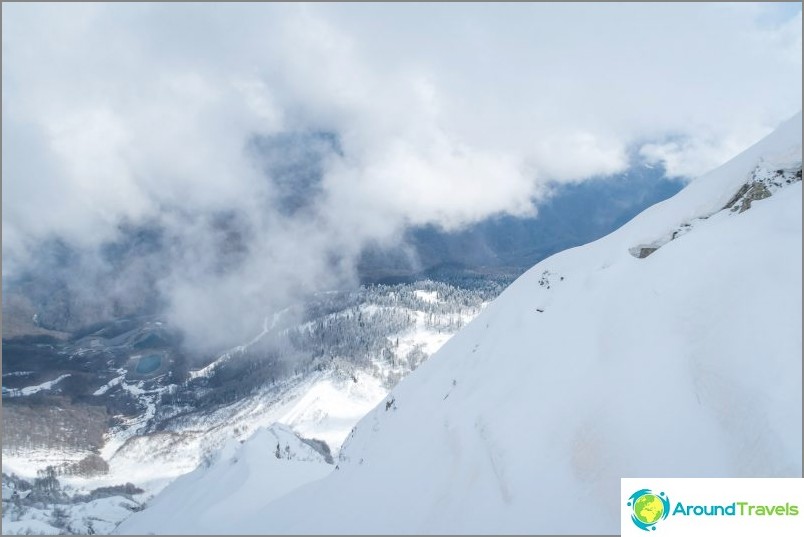 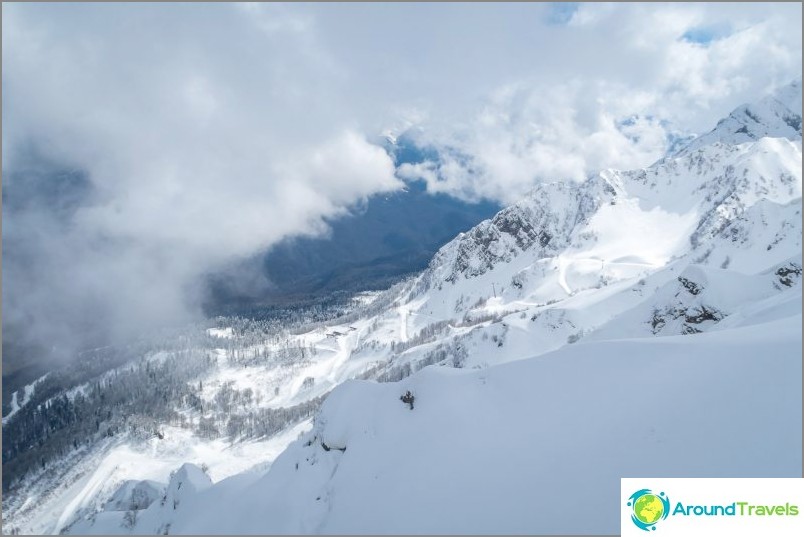 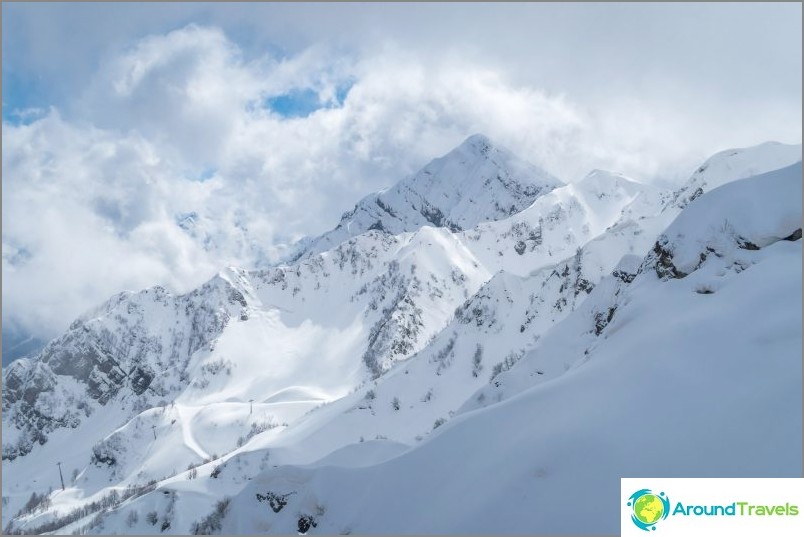 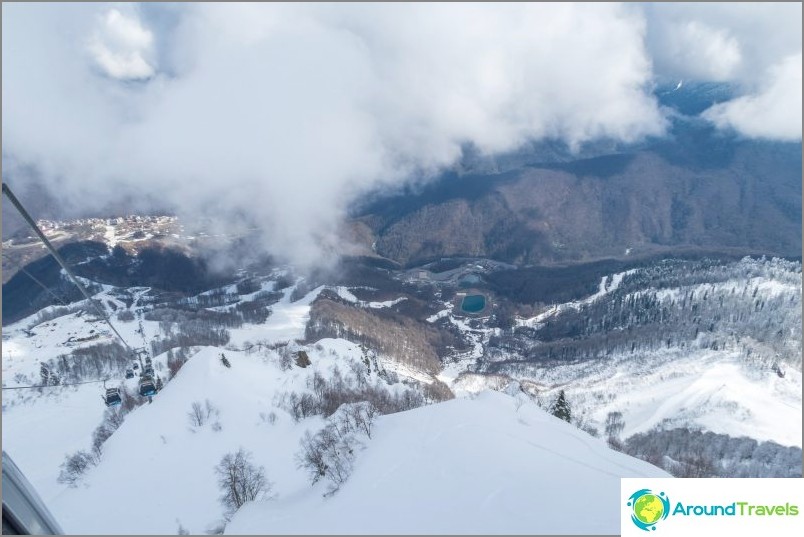 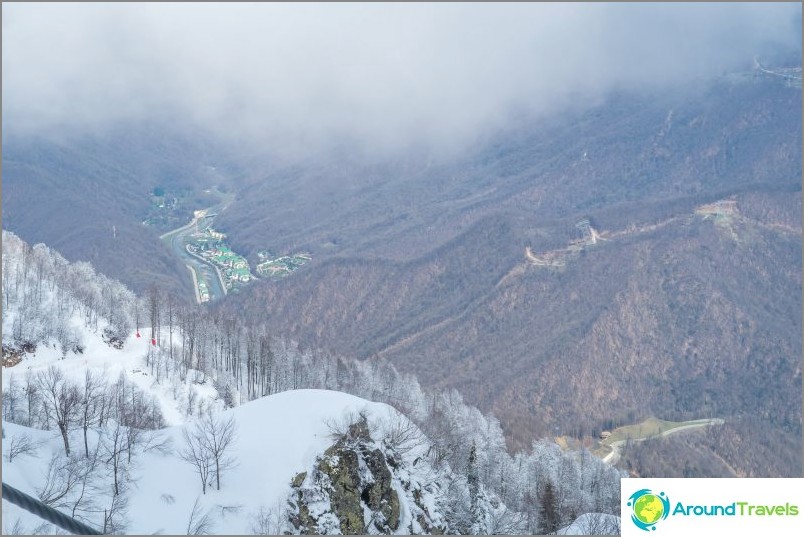 But in the summer, everything is much simpler. Hikers who came to wander through the mountains on a finger count, so there are mostly vacationers from Sochi and Adler, who came for one day (usually without overnight), just to climb Rose Peak to the viewing room. Therefore, no queues at the lift, you can usually even ride in a stall in proud solitude to fully enjoy the silence and views. 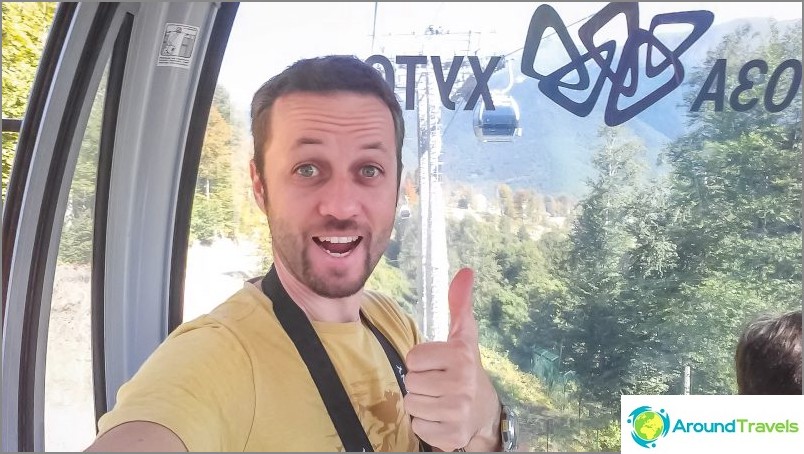 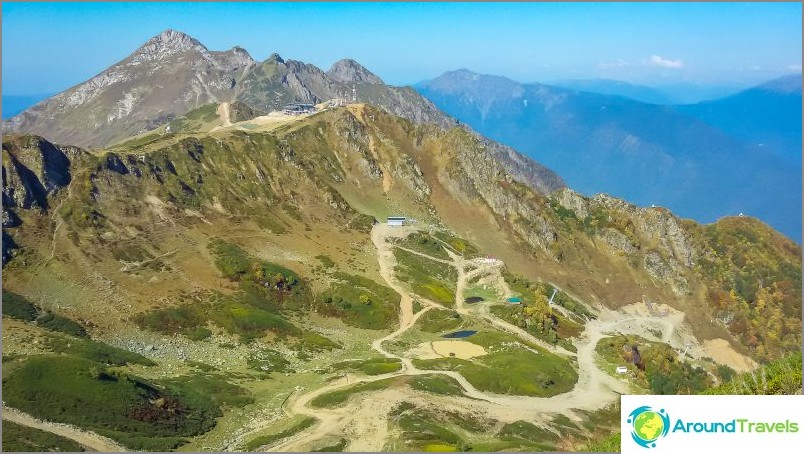 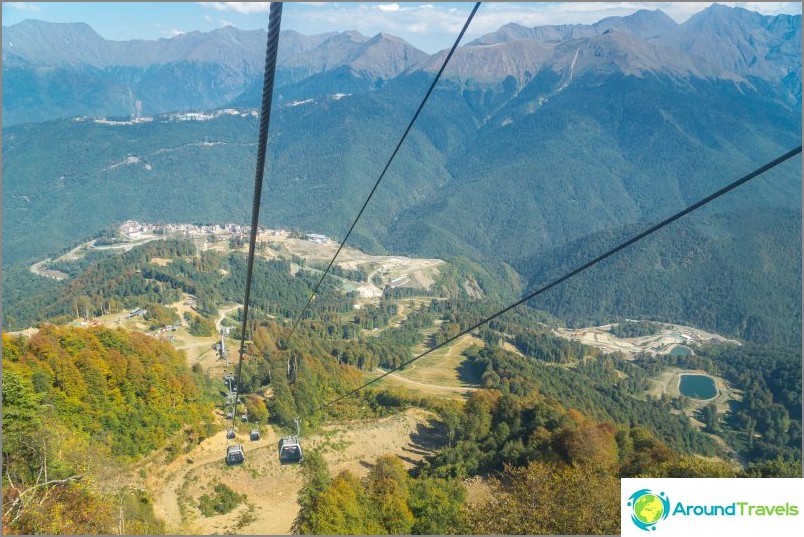 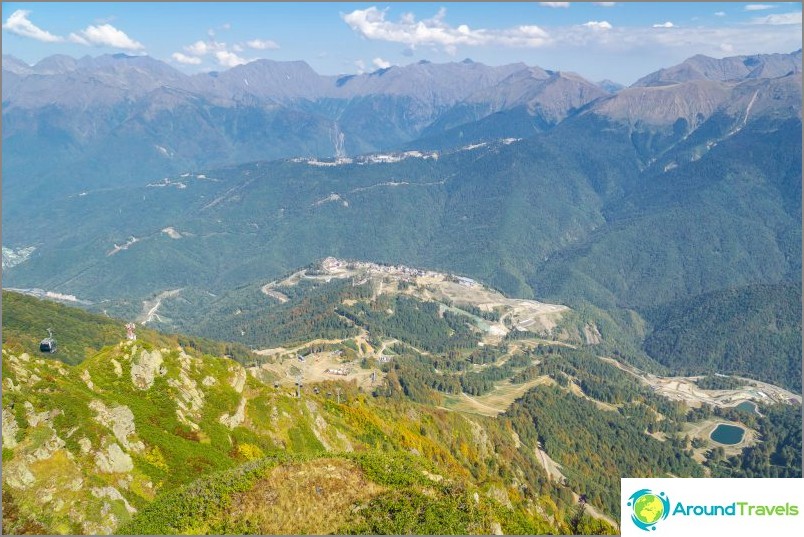 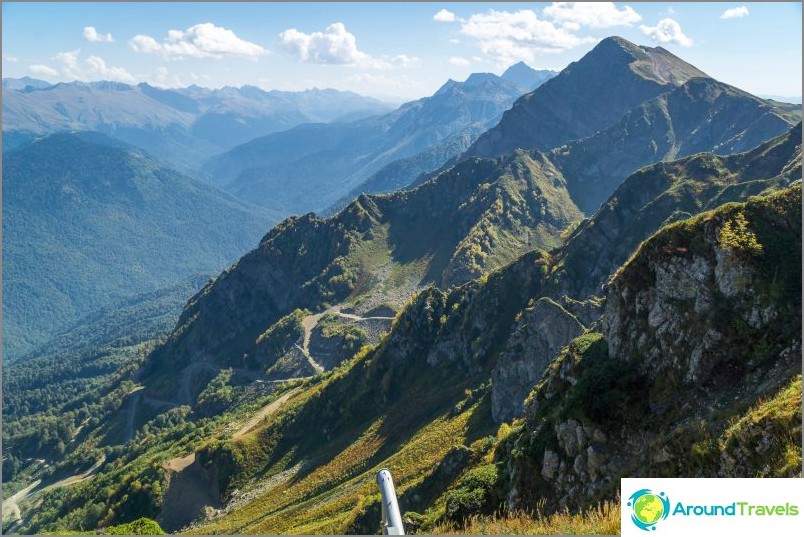 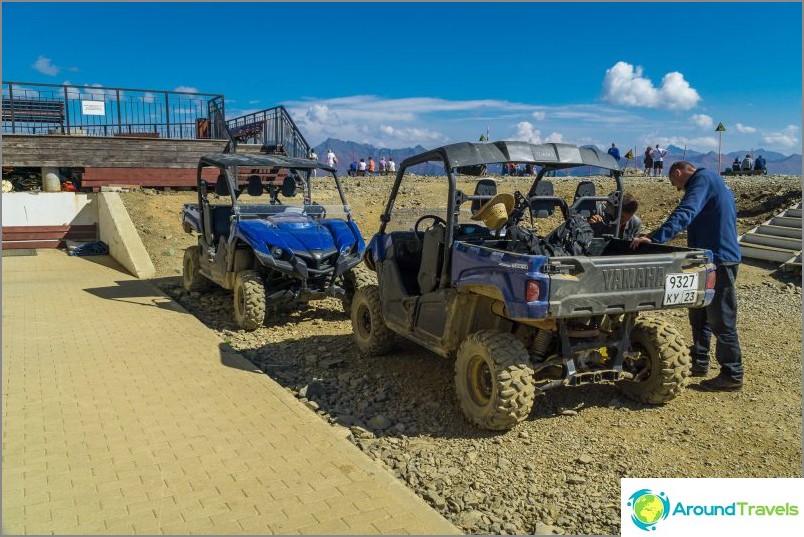 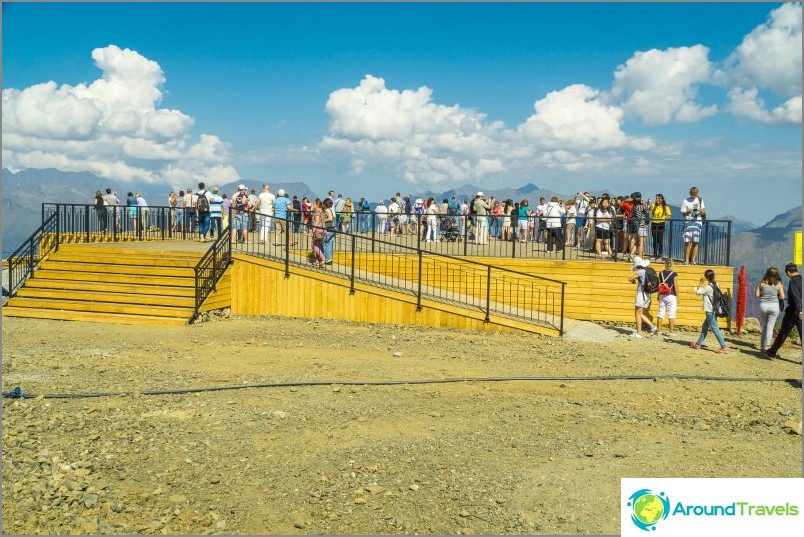 In winter you can climb here by the usual ski pass,which is bought for riding. It is valid for the entire cable car, for all the lifts in Rosa Khutor, including the newly opened Southern Slope. I highly recommend a ride there, good and beautiful tracks. Be sure to take your sunglasses in the winter - snow cuts your eyes and it is impossible to properly consider anything around.

The price of a ski pass in the winter depends on the month andthe number of days needed: 2650-2950 rubles for 1 day per person. In the spring of April 9, 1500 rubles. If you take for several days at once, or season, the price of one day falls, and the cheapest is “Seasonal”, but then you have to live in Sochi to beat it off.

In the summer you just buy a pleasure ski pass.the very top - Rose Peak. It costs 1590 rubles / person for 1 descent and 1 ascent, including the Edelweiss lift on the southern slope. There, too, is worth a roll, because there are several beautiful waterfalls. Also in the summer, they open the route to the Stone Pillar (2509 m), approximately 1-1.5 hours on foot from Rosa Peak, I recommend.

Lookout Rose Peak
2320 meters. On the lift climb 40 minutes. The best view in Krasnaya Polyana. If you go for 1 day, then here.
Read more.

2320 meters. On the lift climb 40 minutes. The best view in Krasnaya Polyana. If you go for 1 day, then here. More details.