Transportation system in Bangkok presenteda good set of services, which will be discussed further. For those who have not been to Thailand and are going on an independent journey, this information may be useful. And for those who are going to take a ride on the Bangkok subway, and for those who need to get from Bangkok airport to the bus station or railway station to continue the trip.

One of the main questions of the traveler - where to stay, how to find the right hotel? I remind you that it is convenient to search for accommodation through hotel search engineThis is a convenient service where you can compare prices.on hotels in different booking systems. I have stayed in Bangkok many times and in different hotels. I will not give links to all my reviews, I will give only a few. Nasa vegas - convenient for stopping near the airport and metro, Rajata - a good place to spend the night near Khaosan, S3 residense located in the center near the park.

Bangkok Metro is of three types:

The fare for MRT and BTS Skytrain depends on the number of stations, and is about the same for both types of transport - 15-45 baht.

City Line runs in two versions - with stops and express, cost, respectively, 15-45 baht and 150 baht. Read more about how to get from the airport by metro, read the article - Bangkok Suvarnabhumi Airport. 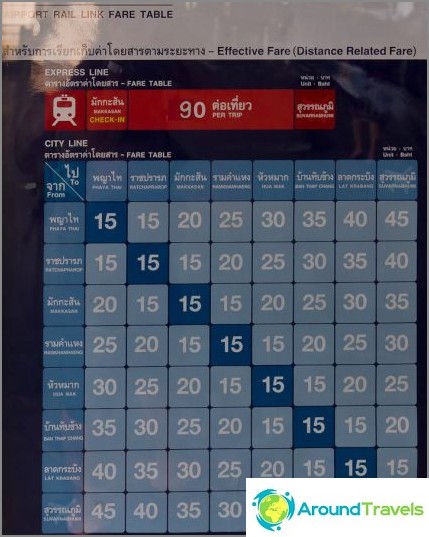 Price for travel in the subway City Line

Large image is loaded by clicking. 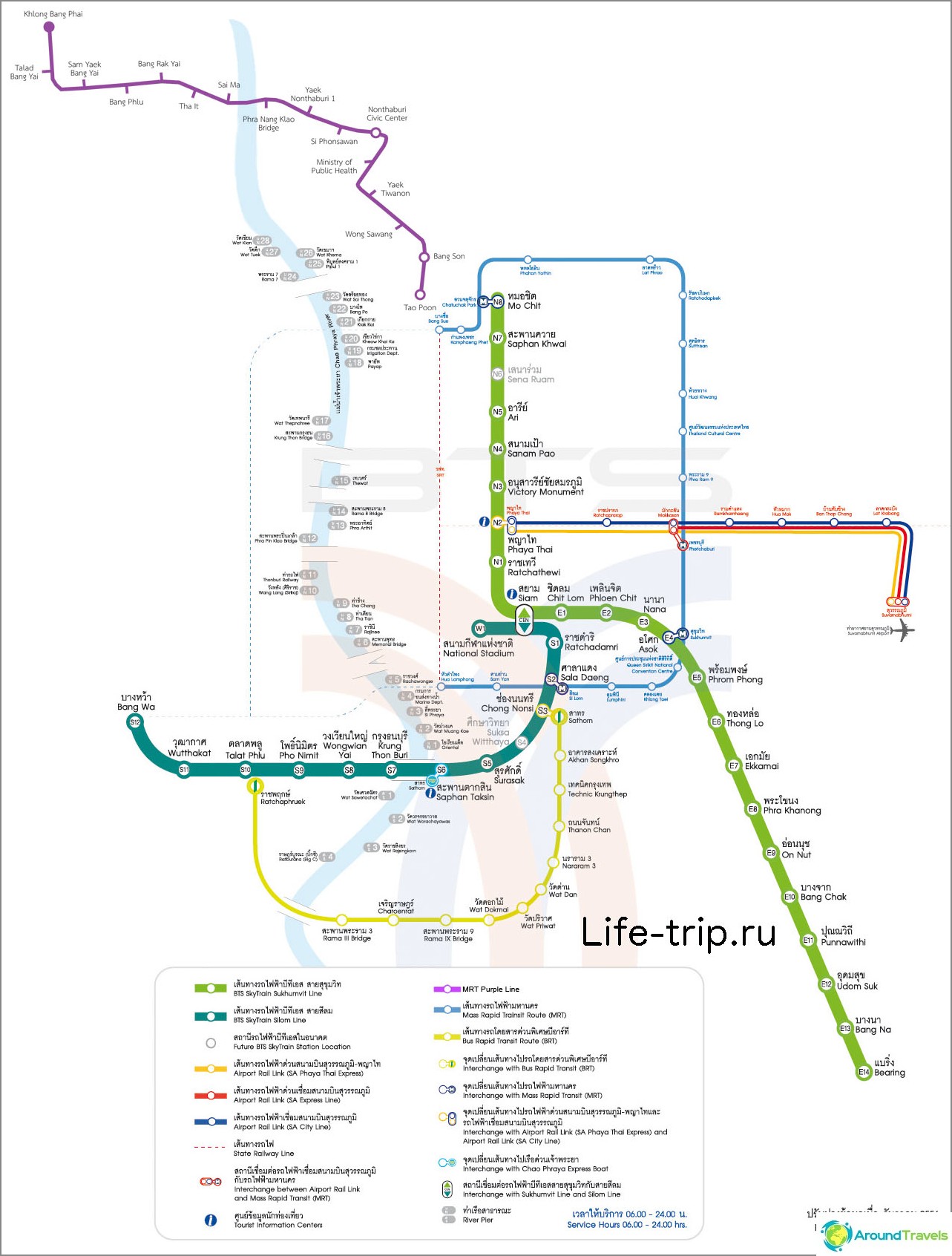 In the underground metro (MRT) - tokens. At the entrance to the station there are automatic machines where you can buy a token by selecting the station you want to pre-select. The machine accepts coins, paper, and gives change. There is an English interface. You can also buy a ticket at the box office from a person, or exchange paper money for trifles, if there are machines at the station that accept only metal. The token at the entrance must be applied to the turnstile, and not lowered into it! But at the exit just lowered into the slot. If you went to a farther station, you will hear a beep, and you will need to pay extra, there is nothing to worry about, ask them to tell you how.

With the underground metro (BTS) all the same, only there are not tokens, but cards. They are also bought in automatic machines and on the same principle.

If you drove your station, then go backback, between trains there and back the transfer is simple, just the apron go. And in order not to pass the station, follow the names, or count the number of stations. You can still listen, but at first it will be very unusual. 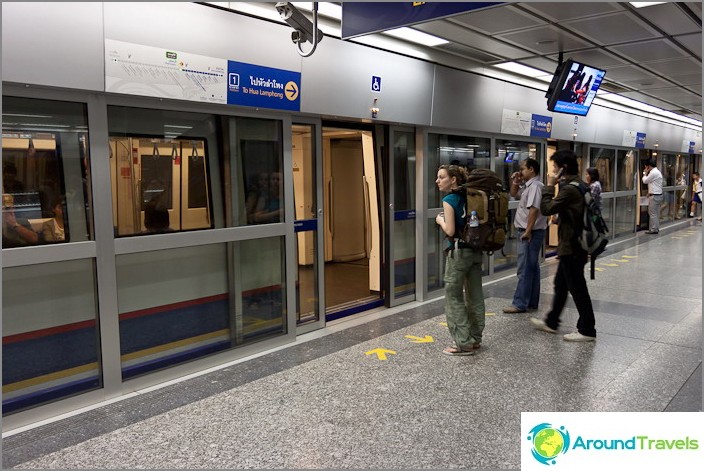 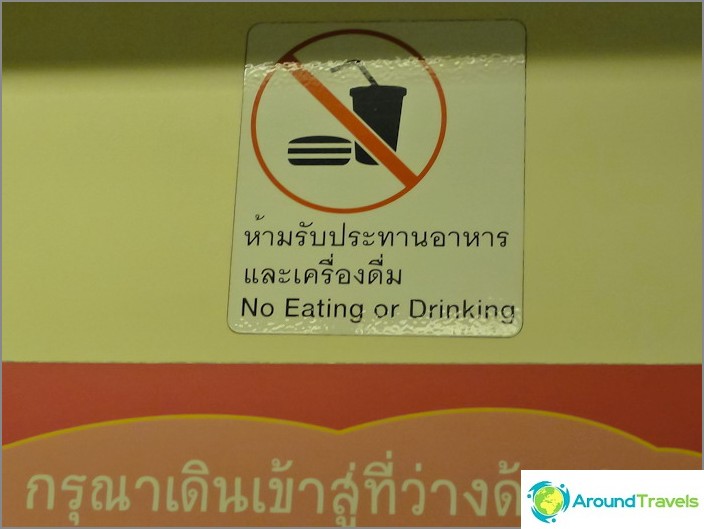 In the subway, you can neither drink nor eat

Bangkok's train station is called Hua Lamphong (Hua Lampong) and is located at the terminal station of the MRT underground station of the same name (on my map above is the blue line, on the left). 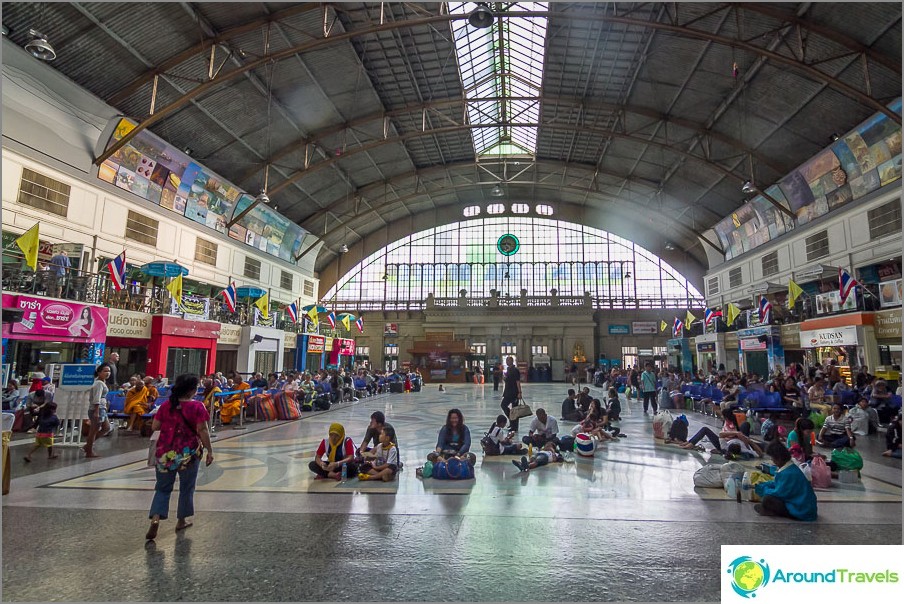 If you are coming from Bangkok airport and you needtrain station, then you need to get off at Makkasan station and transfer to MRT station Phetchaburi. This transplant is simple, the transition has already been built and you just need to follow the signs. The transplant takes 10 minutes.

There is also Thonburi railway station serving the direction to Kanchanaburi.

From Bangkok’s Hua Lamphong railway ride you can get there.in any direction. Only it is necessary to take into account that in a season, or on the eve of any holiday in Thailand, and there are a lot of them, there may be no tickets. If you will be offered bus tickets here, do not agree. The prices are twice as high as the real prices, it’s better to get to the bus station and buy on your own. We were offered somehow for 1,200 baht to Chiang Mai, with the “last” tickets remaining, and left the bus station for 500 baht in a half-empty bus without any problems. Read more about Thailand's railways and class tickets.

Train timetable to look at the officialsite railway.co.th. Choose the station of departure and following and see all the information. At prices, for example, a ticket from Bangkok to Chiang Mai is in a second-class sleeping car (reserved seat) with air conditioning - 791 baht upper shelf, 881 baht lower shelf.

Buy tickets online on the official websitenow it is impossible, only at the railway station ticket office. If you need a ticket in advance and via the Internet, then only through an agency, for example, 12go.asia. Now it is the only service with this service. Payment by card or PayPal. But the ticket will not be electronic, since the Thai railways do not have such a system, you will need to receive the original, either at the agency’s office (several points) or by mail. Here, below you can select the desired cities and see what comes of it.

There also bus tickets will be offered.

Intercity bus service is verydistributed and represented by a large number of private companies. From almost anywhere you can get to another. Buses are good, comfortable, with air conditioning. As a rule, there are several classes - VIP, Class 1, Class 2. Differ among themselves slightly, the width of the seat, as well as the presence of feeding (water + cookies on the bus, and in the cafe at the bus stop).

Prices are as follows: Bangkok-Chiang Mai (~ 700km) 400-800 baht. Read more about buses in Thailand. A ticket via the Internet can be bought there at 12go.asia. 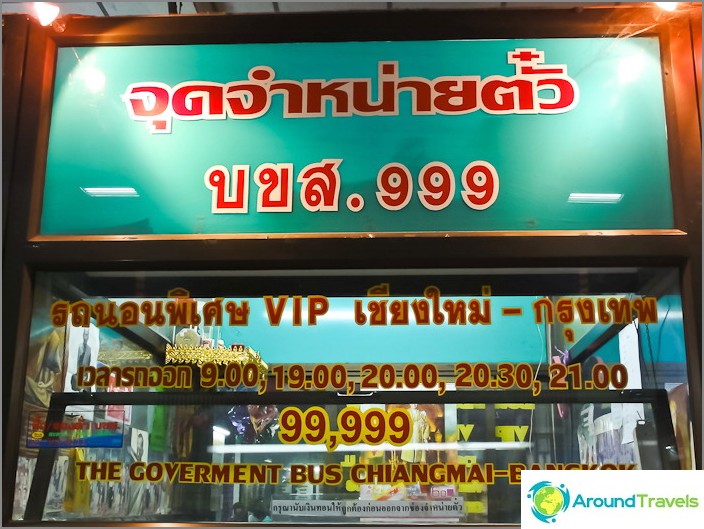 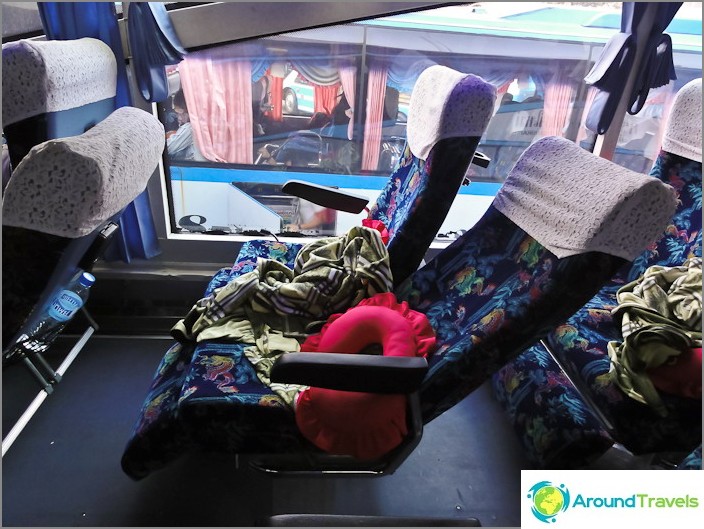 First class on the bus

Unfortunately, the metro does not reach it, onlyby bus or taxi. I would choose a taxi to quickly and without crap. The cost is about 200 baht over the counter from the center of Bangkok and about 500-600 baht from Suvarnabhumi Airport. On the bus, the same 1.5-2 hours to cut from the center of Bangkok. It is better to check in the Thai street or in the hotel which bus, because there is a list of buses on the Internet, but it is not true. As an option, use Google Maps, there is an opportunity to build a route on the bus, however, Google is also mistaken, judging by my experience.

Southern bus station (in Thai, buses go to the south from here. We need a new Sai Tai Mai. Ticket offices on the 3rd floor. More.

You can get to the bus station on foot from the stationChatuchak Park (MRT subway) or from Mo Chit station (BTS Skytrain), walk 15 minutes, you can also take bus 138. Accordingly, if you are coming from Bangkok airport to the City Line, you need to transfer from Makkasan to Phetchaburi (MRT) or at Phaya Thai station, transfer to BTS Skytrain. The last option is shorter.

How to get from Bangkok to Chiang Mai

You can get to Ekkamai bus station on foot fromEkkamai station (BTS Skytrain). And if you are coming from Bangkok Airport to the City Line, then you need to transfer at Phaya Thai station, where you can transfer to BTS Skytrain.

East bus station. From here, buses travel mainly to the east of Thailand. Located right next to the metro station of the same name BTS Ekkamai. More details.

Victory Monument is a metro station. Near it, until October 2016, there was an unofficial bus station in Bangkok, from where about 4,000 minivans started in various destinations in Thailand. The place was terribly popular, because it was almost the only bus station (albeit illegal), where people directly from the subway got into the microbus and immediately went home. All this pleasure was accompanied by serious traffic jams on the square at the monument, with which, in fact, the military decided to fight. Now all four thousand minibuses are distributed between state bus terminals, and only a few routes that carry people to the nearest suburb temporarily continue to stop on the square.

Considering that the illegal bus stationfunctioned for several decades, and hundreds of thousands of people come here out of habit, the Bangkok government provided citizens with free shuttles to bass terminals, which, it should be noted, are scattered throughout the city and difficult to access even for the local population. In the sense that going there is hemorrhoids, costs and lost time. Shuttles run from Chatuchak to Mo Chit 2 and from the monument to Sai Tai Mai and Ekkamai every day from 5:30 to 20:30 every 20 minutes. Shuttle to Sai Tai May starts even at 4:30.

Terminal Mo Chit 2 - for those traveling north, northeast and central Thailand. From the bus station Sai Tai Mai buses leave for the south; and with Ekkamai you will go east.

Unofficial bus station at Victory Monument
From here start minivans in different directions: Pattaya, Hua Hin, Ayutthaya, and so on. It is located right next to the metro, descend from the BTS, and there are mini-bass stands at the bottom with barkers.

From here start minivans in different directions: Pattaya, Hua Hin, Ayutthaya, and so on. It is located right next to the metro, descend from the BTS, and there are mini-bass stands at the bottom with barkers.

Bus service in the city of Bangkok tooIt is developed, and you can only go to some places by bus (or tuk-tuk), for example, to Khao San Road, which is popular among backpackers, where more guesthouses and hotels are located. Information on bus routes can be seen at bmta.co.th. Also, bus routes can be built on Google Maps. It does not always show the correct numbers of buses, but in general it works fine.

P.S. I also recommend to save time. Taxi. They are very cheap there, if you drive over the counter. But at rush hour, of course, it is better to travel by metro, otherwise you can stand in traffic jams.