When I arrived at Hua Hin, the first thing II wanted to see, so this is the mountain, where myriads of bats live. Or rather, not the mountain itself, but how these mice fly out from there once a day, reminding of the living smoke from Lost. On the one hand, it seems to be something like that, they fly and fly, but for me I have never seen anything like this, this action is amazing and unusual. In my own hearths, not only thousands, you cannot meet a single bat.

So, tell you what kind of a mountain it isinteresting. It looks nothing special, you will go in the afternoon, and you will not notice, the same as a few more nearby. The only difference is a small viewing platform on the road. Once a day, at about 18 o'clock in the evening, a thick stream of dark smoke begins to fall from it, wriggling like a snake, which has come to its tail. Only this “jet” has an unusual composition: mouse bodies squeezing and flapping wings. Where they fly, why, and why exactly one after another, no one knows. The main assumption is the hunt for insects, but it does not answer the question, why build? But this is not so important, as long as you look, there are no questions. This escape from a habitat lasts about 10 minutes. First, the flow is dense, but then gradually dries out. 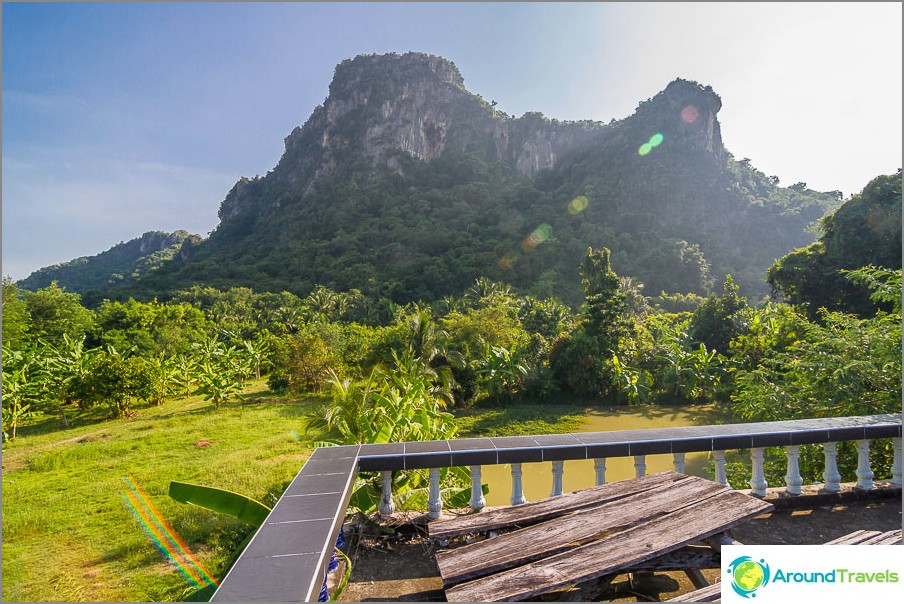 View from the site during the day on the very mountain 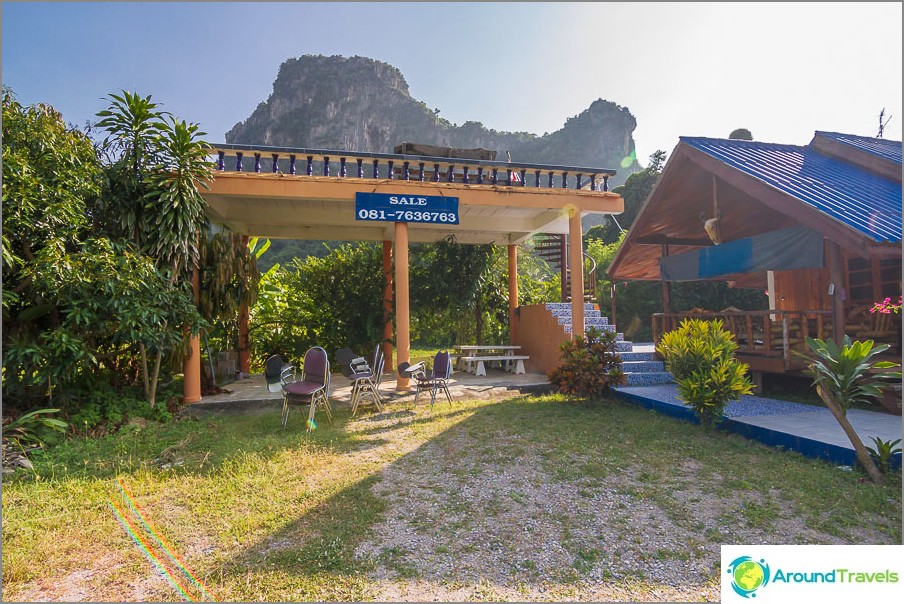 The territory has been sold for several years, but apparently there are not so many 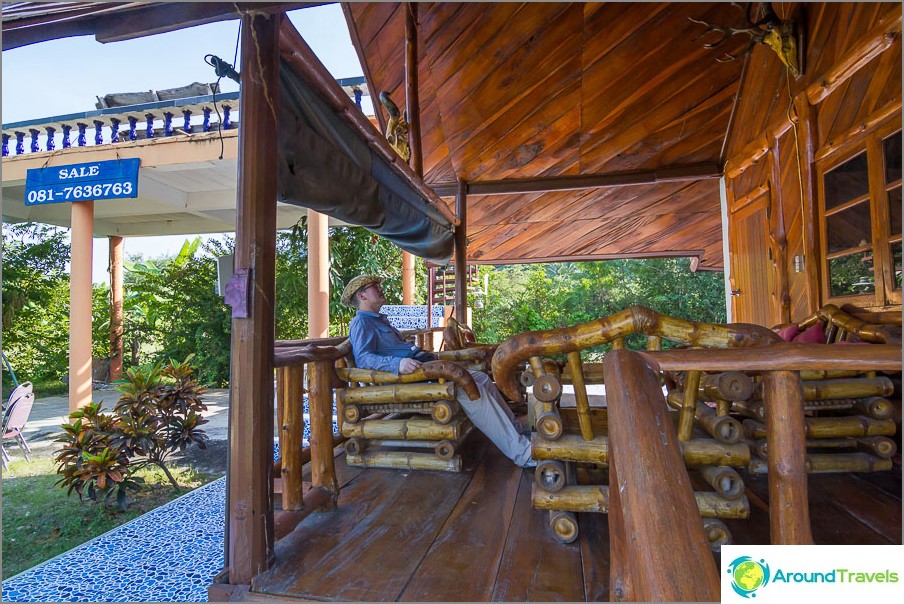 The house next to it looks like a guesthouse 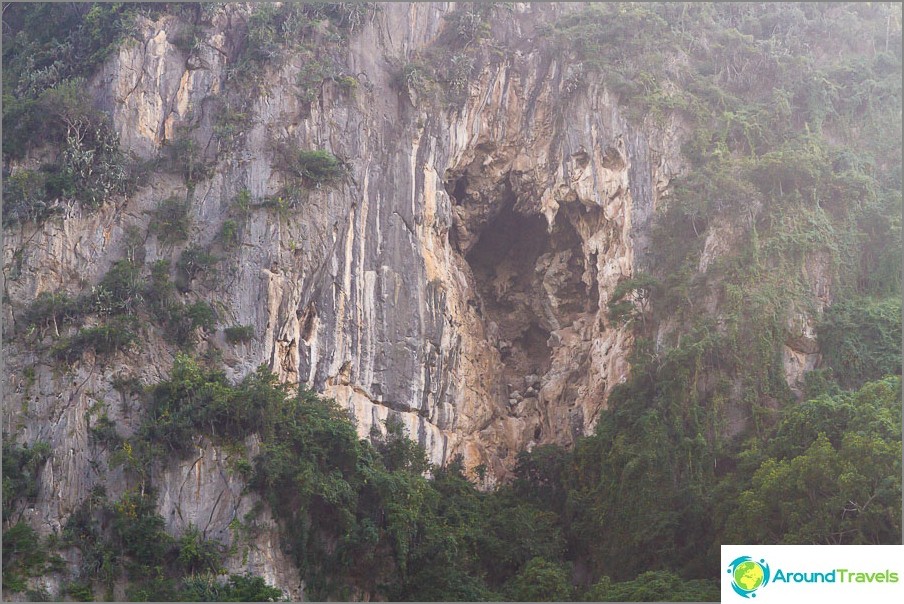 Maybe fly out of a similar cave.

We arrived for the first time in the afternoon, looked around, went on a ride around the sights, and then returned closer to 18 o'clock. 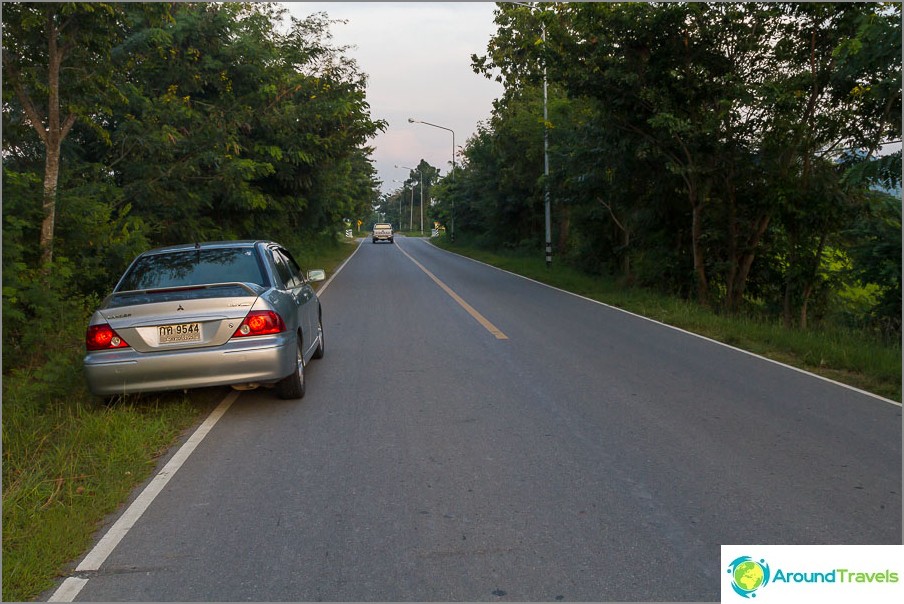 Almost got to the place 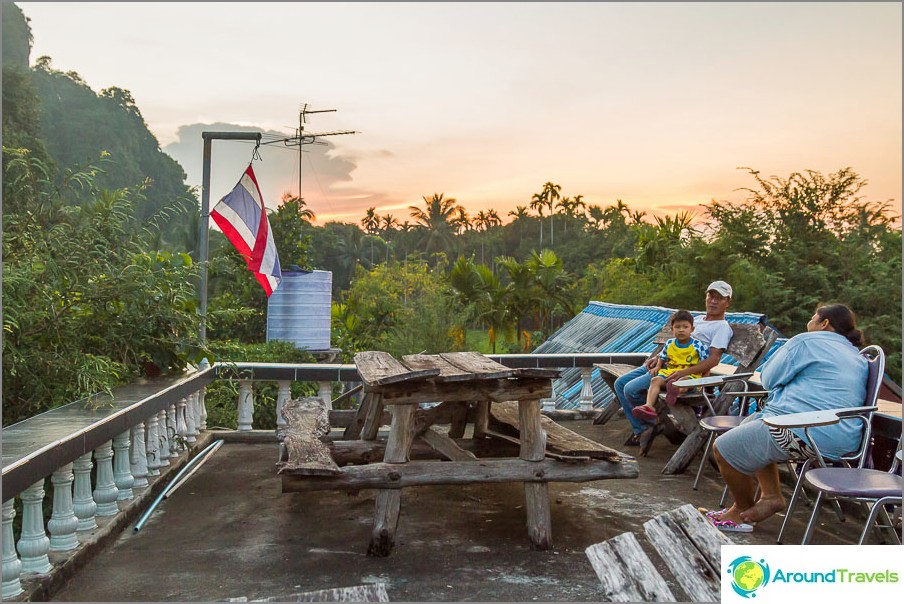 Thais are already sitting on chairs waiting for sight 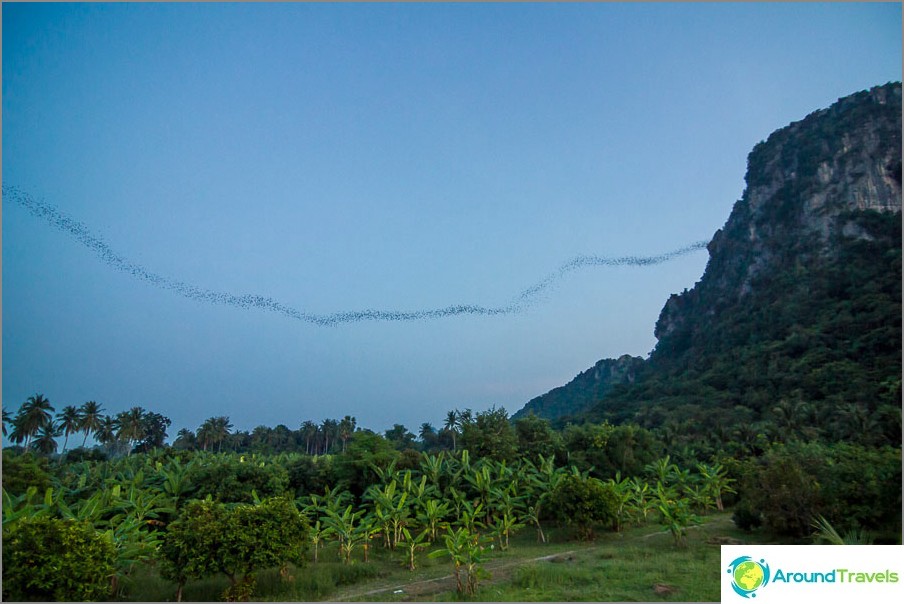 The spectacle has begun! 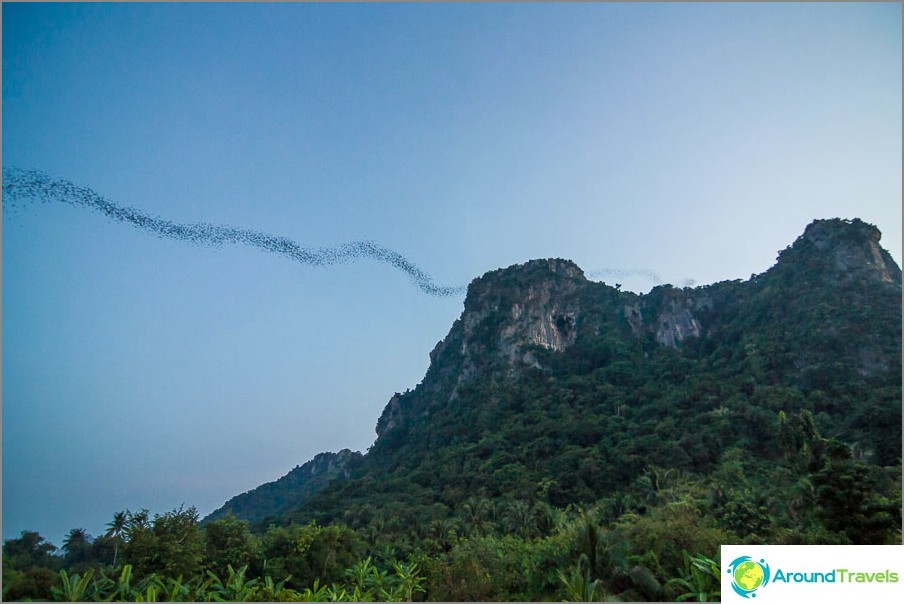 The mountain of bats near Cha Am 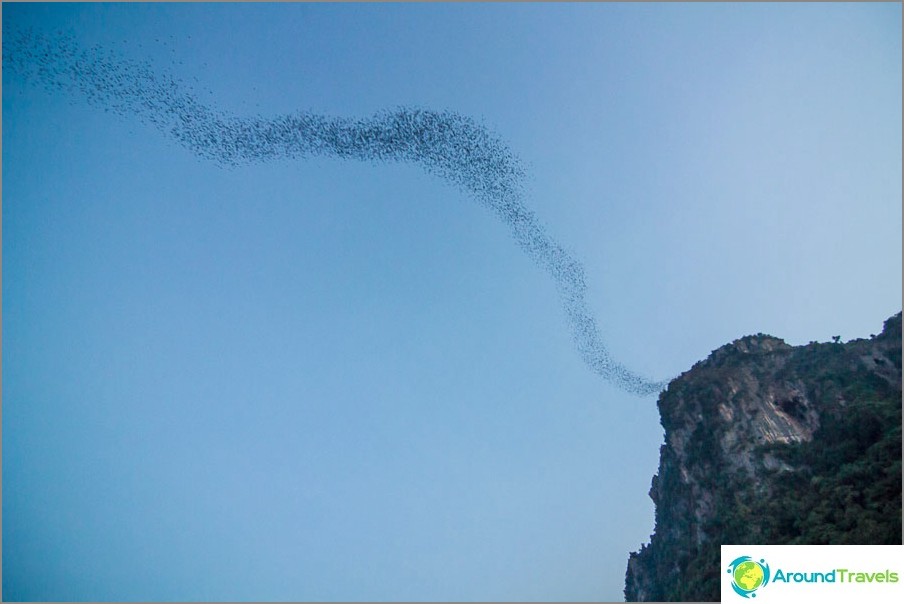 If you bring it closer, you can see that these are bats. 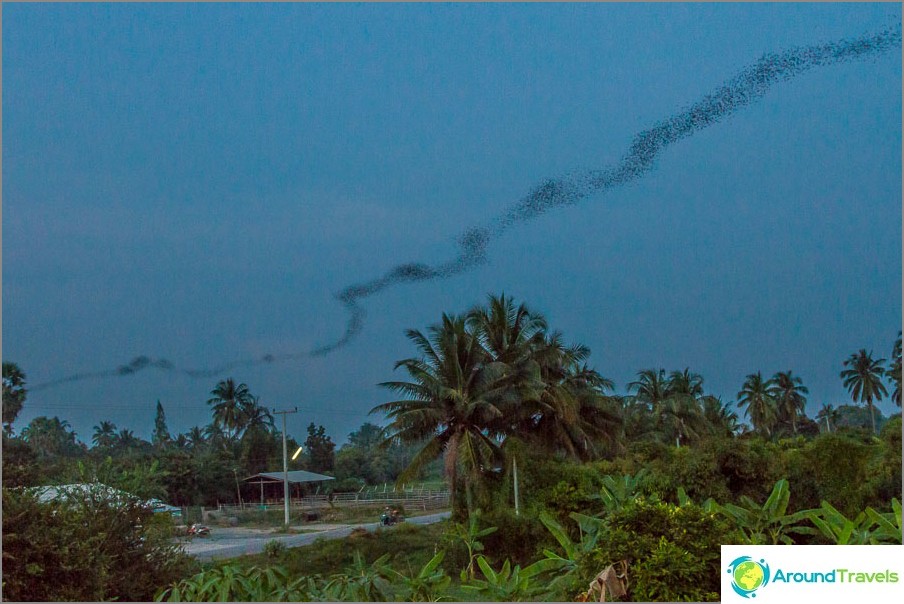 Fly away to an unknown distance

A short video to better understand what it is. True, the camera, which shot the video, stood on a tripod not very well and I forgot about it, being fascinated by photos.

For quite some time now began to take 20 baht for an entrance. But if you feel sorry for, then this action can be observed from the road (do not climb the platform) and pay nothing.

For me, the spectacle is enchanting and worth it tosee. As I have already written, it starts at about 18 hours, and it is better to come no later. But if suddenly, the mice do not fly, then this is all because they are not guided by your watch, but by darkness, which in turn depends on the time of year. So count on 18 - 18:30 pm.

If you want to visit this place, you can stay in Hua Hin, for example, budget hotelwhere we stayed. Alternatively, look for friend hotels in Hua Hin or inCha Ame, if you want to spend the night in Cha Ame, so that it is closer.

How to get by public transport, I do not knowand I think this is not a good idea. First, you will have to go anyway part of the way, and secondly you will return in the dark. Therefore, there are three options: rent a car, rent a bikehitchhike. I chose the first option, because I wanted to travel around the neighborhood: Great Ushastik, Black woman<.htmla>. Cave temple, and while not too tired of the distance. And on the way back, we still stopped to see the famous Black Monk (Wat huay mongol). That's how much in just one day. In addition, my companion refused to ride a bike, and especially there were few options. Bike and car is easy to remove straight in the center of Hua Hin. The bike costs 200 baht per day, car 1200 baht.

You will need to drive along the main road.Pechkasem (Phetkasem Road) in the direction of Bangkok and after Cha Am follow the turns. A landmark can serve as an amusement park, it will be on your left. But after it you can already prepare. Closer to the turn there is a billboard, but he didn’t take pictures of him, he could change. The mountain will be located to the right of Pechkasem in the course of your movement, but the turn there will be through the left turn (the movement is left-handed). After turning, you will need to turn right again after 500 meters. And then, as the field ends and the forest begins with the mountain, look out for a viewing platform on the right. To go from the center of Hua Hin by car about 40 km, from Cha Am very close.

observation deck. Read more about the mountain of bats.

P.S. I know that many people stray there, but it’s really very easy to find when there is a point on the map. GPS and Google maps they rule, I found the first time. The point on my map is accurate. UPDATE. A year later, and on Google itself, this point was put down, called Bat Viewpoint.

P.P.S. You will take pictures, note that it will be almost dark, high ISO and high-aperture lenses to help. My photos are clarified, so there is darker than in the photo.

The temple on Khao Tao mountain and the best ...