Home>New articles>Museum of steam locomotives in Pereslavl - divorce or altruism?

Museum of steam locomotives in Pereslavl - divorce or altruism?

I usually don't like excursions (I appreciate moreinternal feelings), and the posts I write are not historical, cultural and educational, but here I will make an exception, this is the locomotives! Actually, therefore, when I learned that there is a Museum of locomotives in Pereslavl-Zalessky, I did not have to choose where to go first. I personally liked the museum, and there it is much more interesting than in the rest of the museums of irons, teapots, ingenuity, coins, and other small things. Compared with all the above, it is the Museum Museum of steam locomotives. The rest pull on infotainment stands, no more.

In addition to the excursion, we also talked to the museum staff and asked why everything is so ...

Excursion at the Museum of steam locomotives in Pereslavl-Zalessky

First of all, it is worth knowing that the museum is associated withnarrow-gauge road, and not with the "real" big. For me, the narrow gauge railway tracks are also interesting, but for some reason Daria wanted some large locomotives. The second thing you should know is that there are not very many exhibits and some of them are in a deplorable state. Moreover, it is impossible to go inside and have to be content with the view from the outside. We booked a tour, which I recommend to you. Without it, it will not be so interesting. Plus, you can ask various questions, and employees, seeing your genuine interest, will gladly tell you something. And the music of old years, flowing from the horn on the depot facade, will create an authentic atmosphere.

Previously, the exhibits were open, and inside couldget everyone. But when the number of people increased, it became difficult to monitor the adequacy of the behavior of each visitor (there were bad cases), because you won’t stand above the soul, you need personnel who are not there yet. Almost all the exhibits on the go and workers! However, again, their tests and kindling are produced, as long as no one is near, it is dangerous. 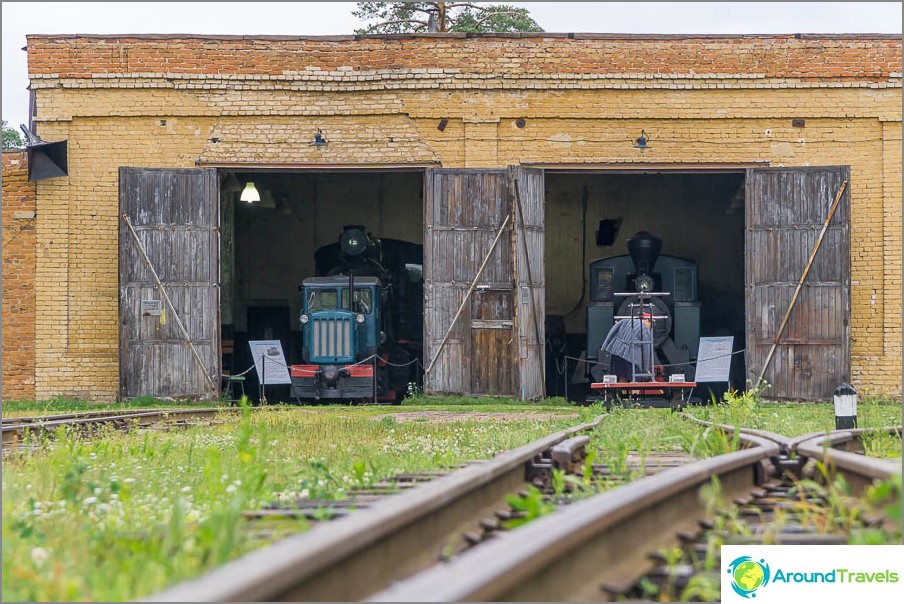 Museum of locomotives in Pereslavl-Zalessky 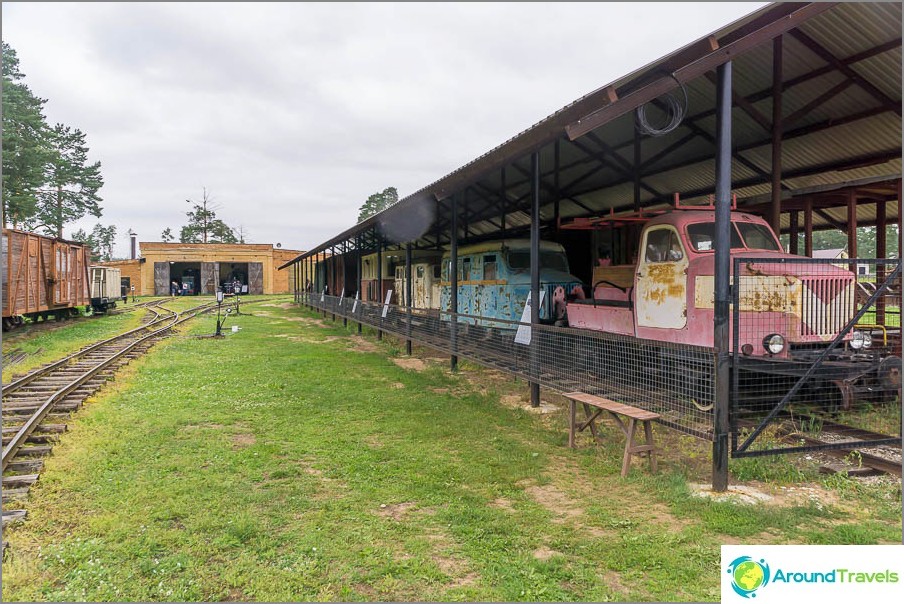 Museum of locomotives in Pereslavl-Zalessky

The museum was created on the basis of the locomotive depot. It was located here, that is, it is real, not a replica. The railway has already been dismantled and only a couple of kilometers are left for testing, previously there was something about 150 km. Initially, the goal of the narrow gauge railway is peat delivery in the region. Moreover, the deposits were quite rich, therefore, until the country switched to more efficient fuel, the peat was transported almost to half of Russia — first to the station of the large railway, and from there, by ordinary non-narrow-gauge cars.

Before you disassemble the piece of iron, they tried to runpassenger message, but it did not go, and at the beginning of the two thousandth decided to abolish it. All replaced roads, narrow gauge railway was no longer needed. Although the museum and the locomotive, but on one of the ways is a diesel locomotive with a car, the very one that is here and carried passenger traffic. He was left as an exception, although they try not to keep the exhibits, newer than the 1960s, that is, only locomotives and locomotives. 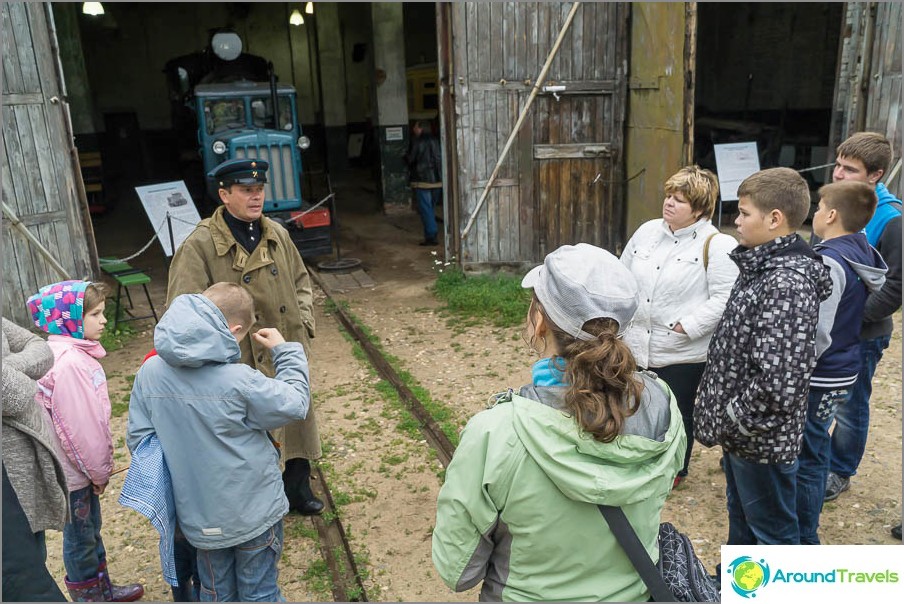 Excursion at the Museum of steam locomotives 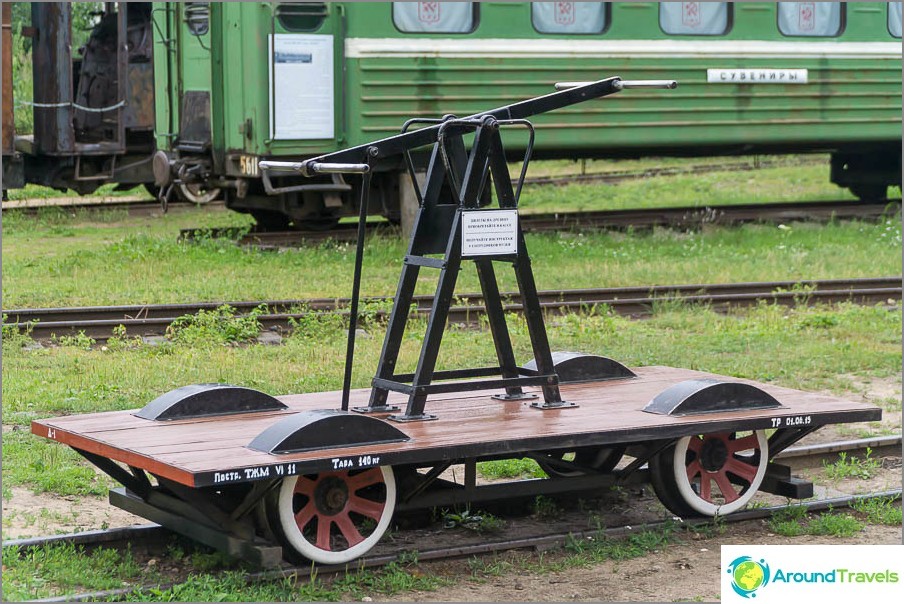 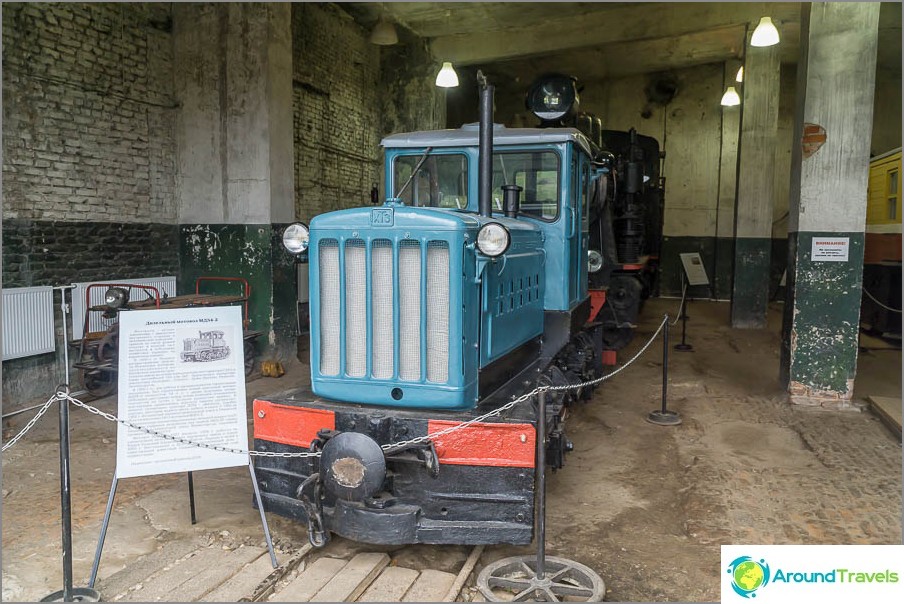 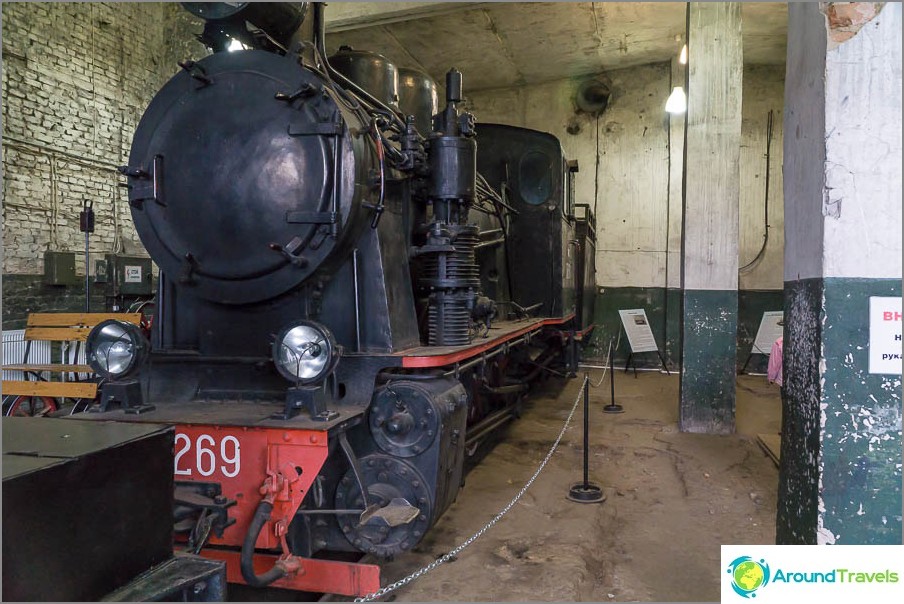 German locomotive Gr-269 - unsuccessful model due to the high center of gravity, swayed and destroyed the narrow gauge railway 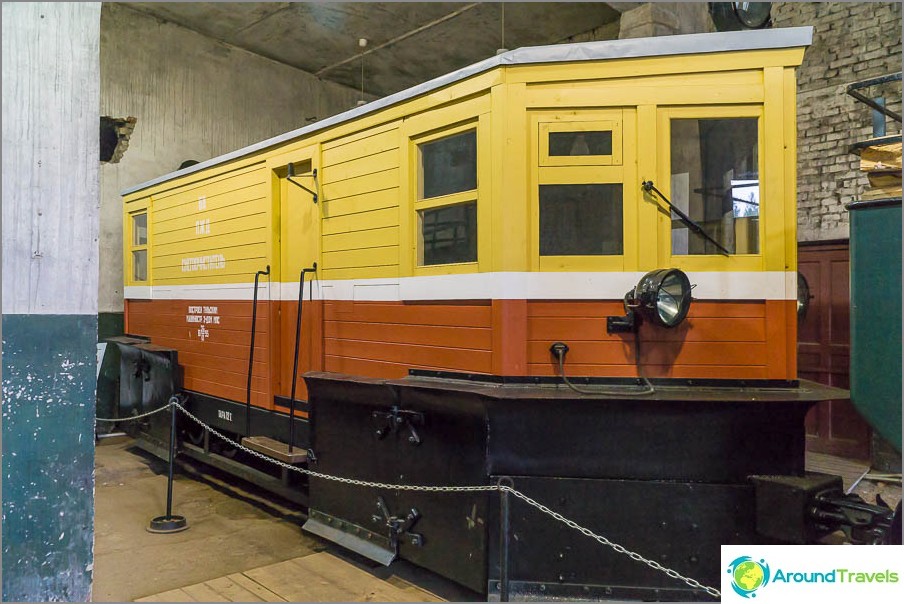 Car-snowplow, these are still used 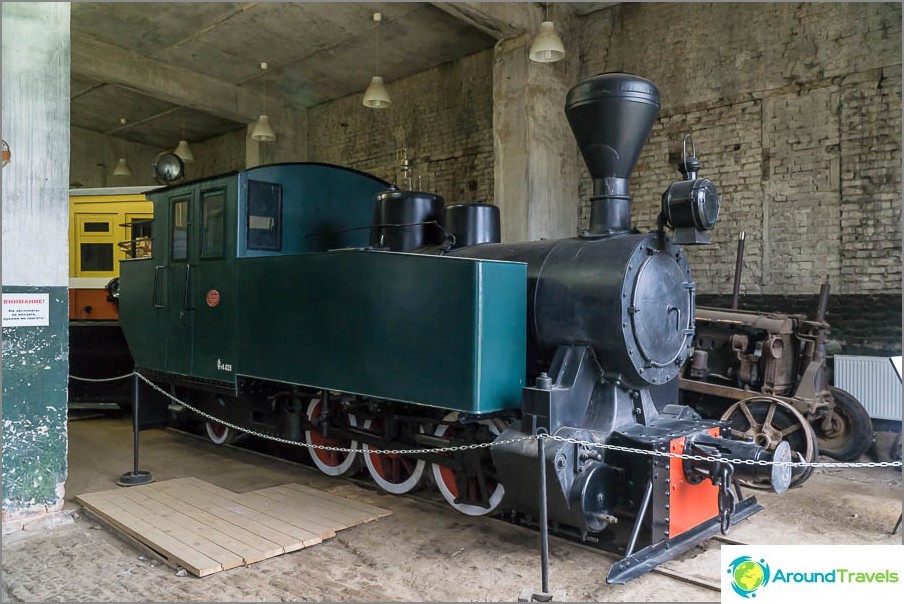 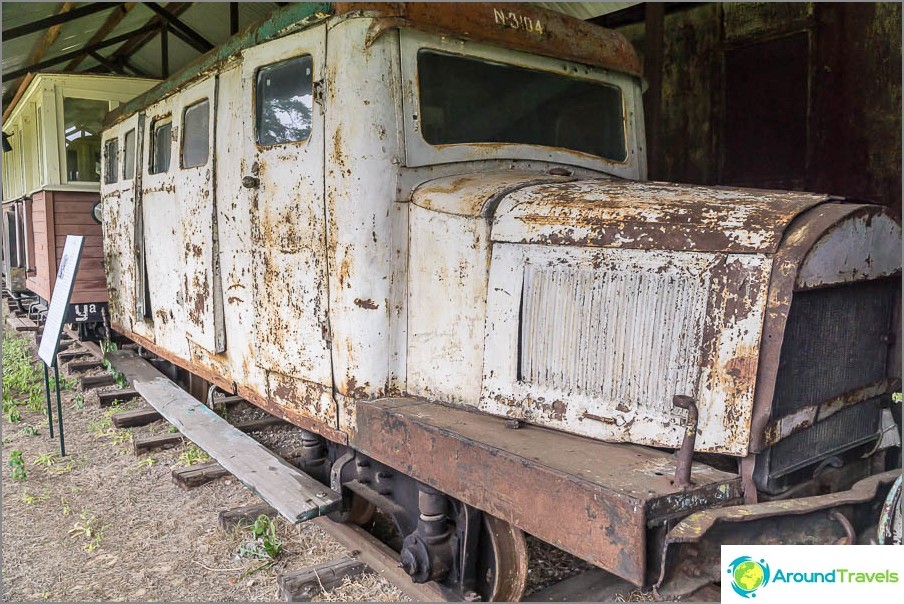 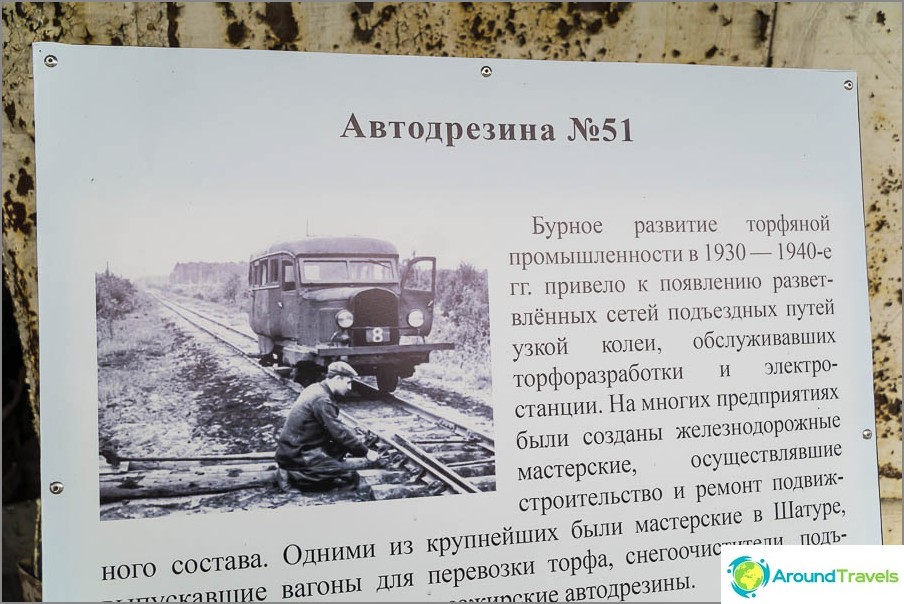 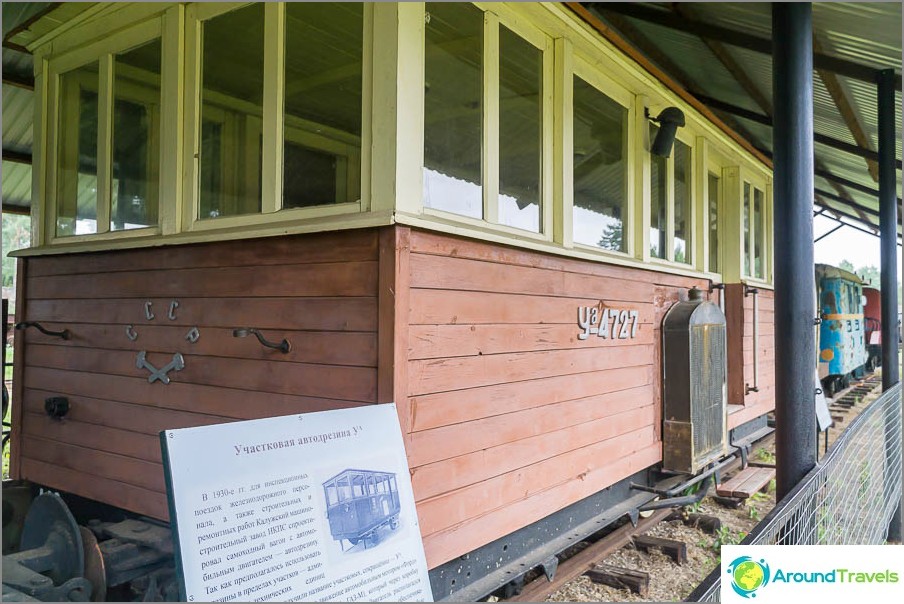 Autocar in the middle of the engine 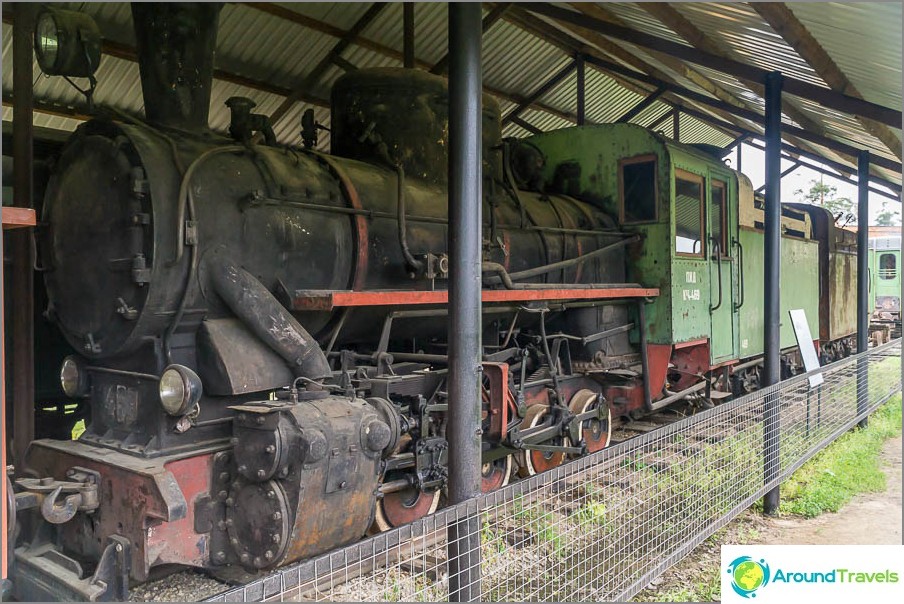 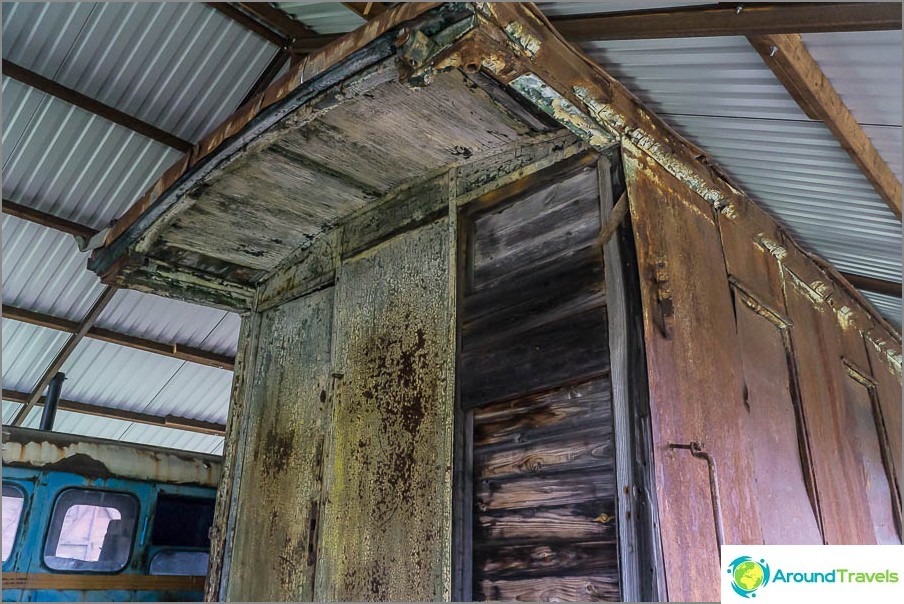 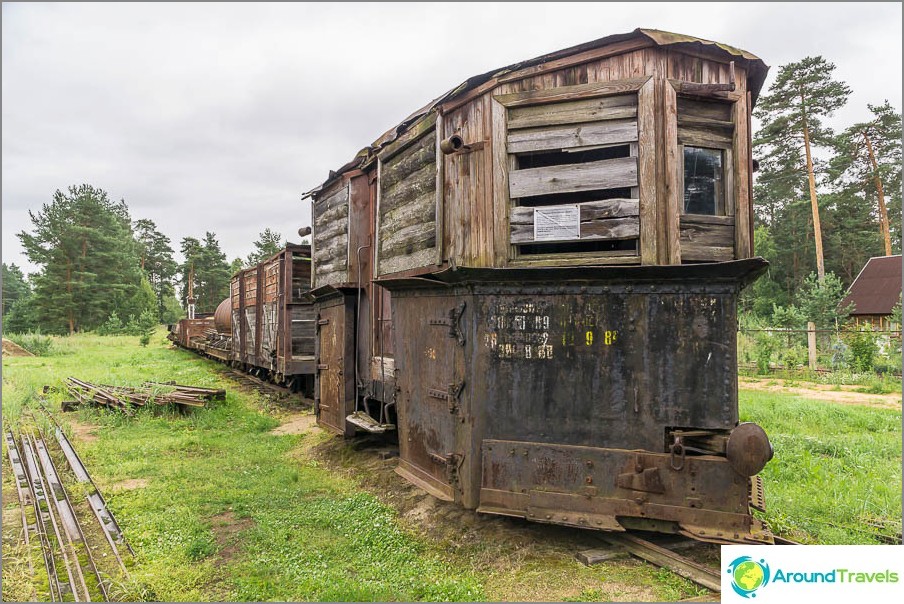 The car snowplow not restored 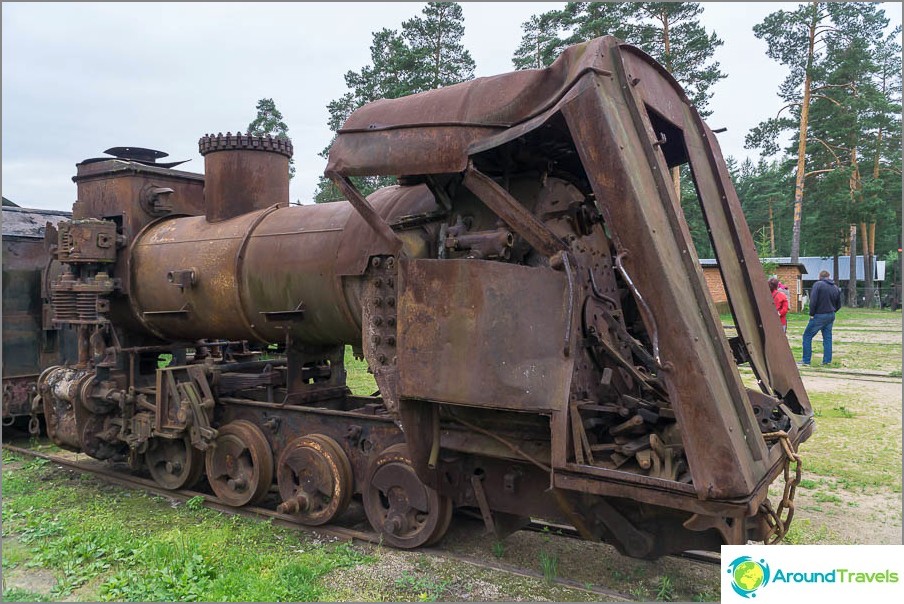 The remains of the engine VP4-2120, he was found in the swamp 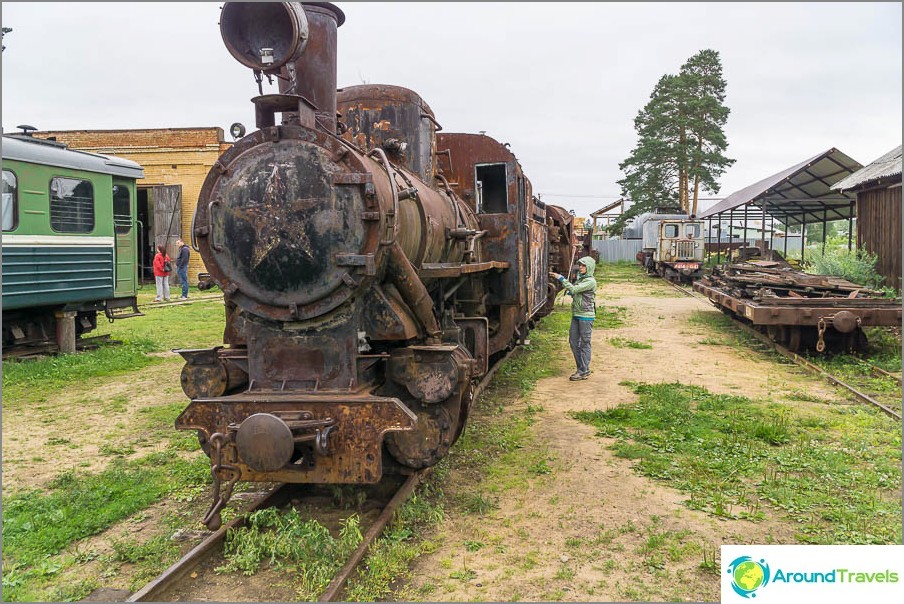 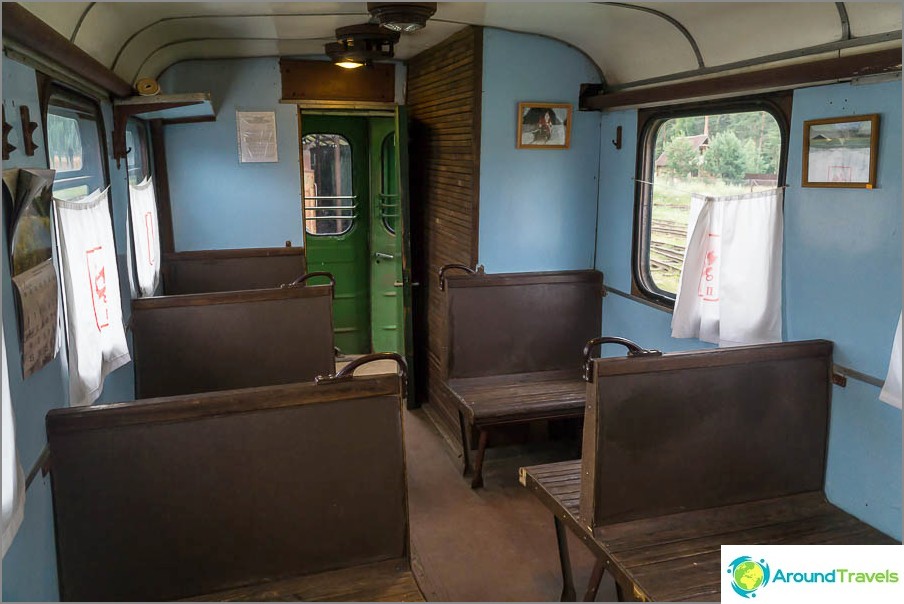 Inside the passenger car (now a souvenir shop) 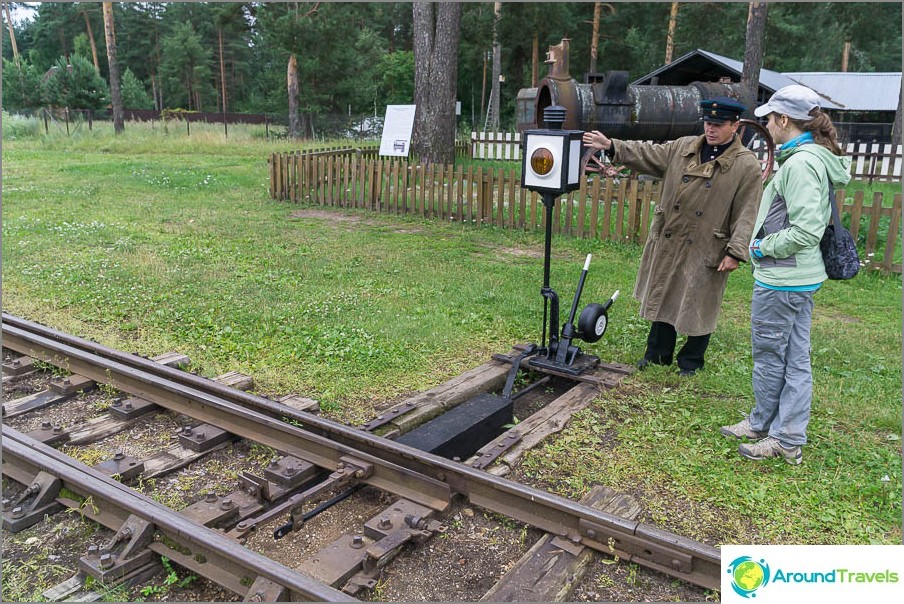 Demonstration of the switch mechanism 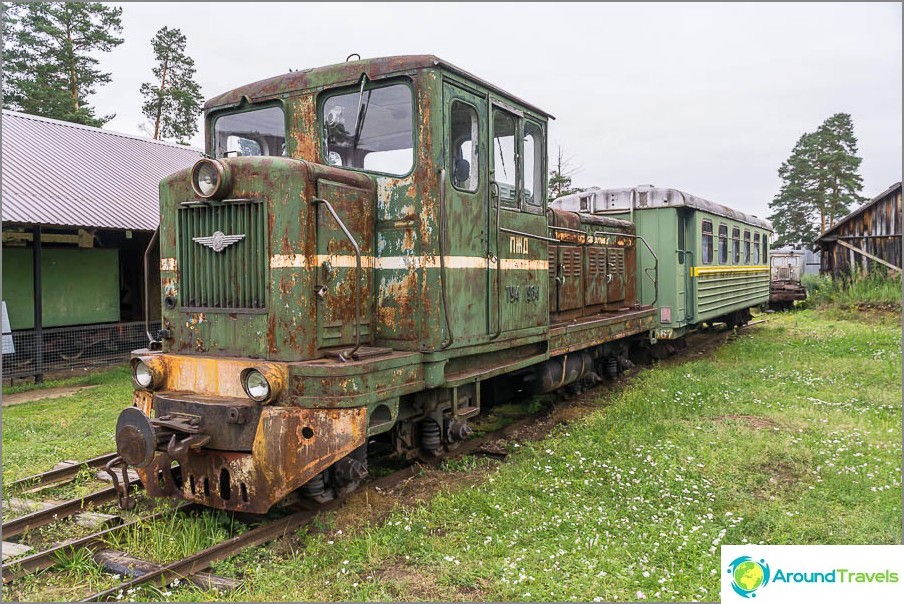 Narrow Gauge goes into the distance, a couple of kilometers

I really hope that the museum will not perish, andsomeday they will be able to start letting in steam locomotives and carriages again, because it is terribly interesting. Or at least make stands with photographs of "entrails". By the way, if you ask, then you will open a "secret" room, where there is a wand apparatus. By default, it is closed. 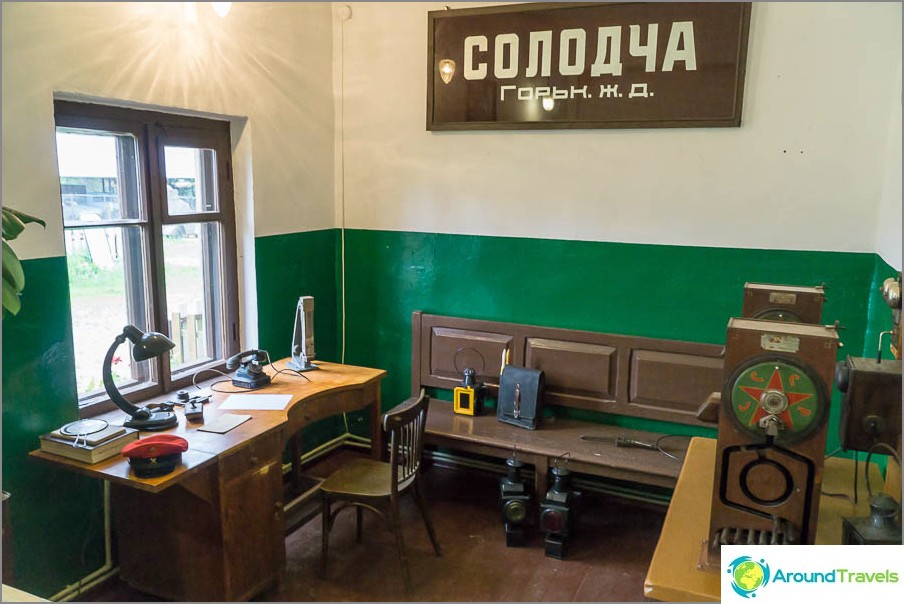 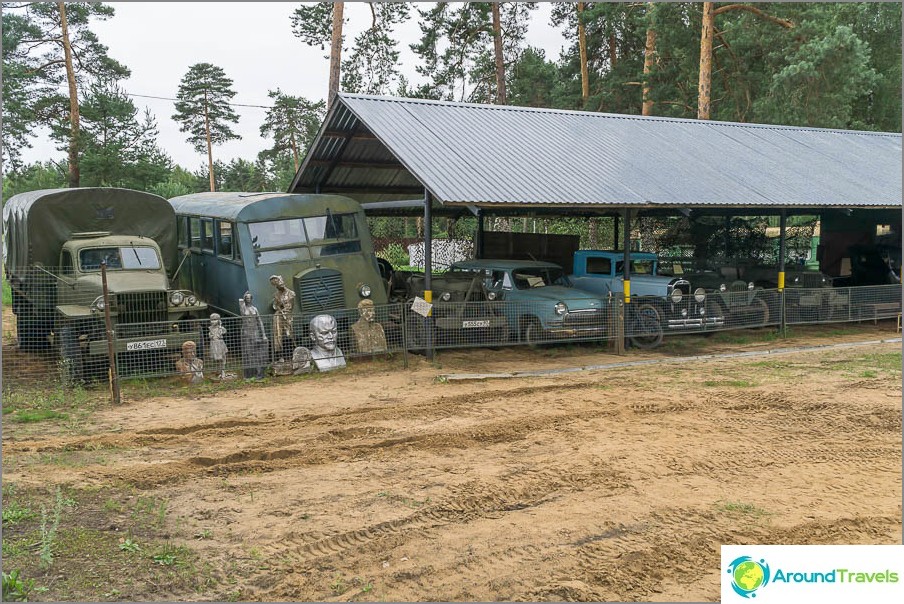 Opposite the museum there is a garage, but it has its own owner.

Reviews of the Museum of steam locomotives vary frompuppy delight, ending reproach in a divorce for money. As always, the truth is somewhere in the middle, if not in a different plane. Now I will try to explain. On the one hand, steam locomotives are always great, and an inexperienced person should enjoy it, like a simple one. Iron Museumconsisting of just one room, inspectionwhich takes no more than 10 minutes. On the other hand, if the traveler is experienced, he may not appreciate that they take money from him and show only a few living locomotives (the others are rotten), despite the fact that he was dragging along the bad road to the suburb of Pereslavl. Some disappointment may come, depending on the experience of visiting other museums.

We talked to the museum staff and found out inwhat's the problem. And it sounds like this - the museum is completely private and it has no money to maintain and restore the locomotives with the necessary speed. Even the awnings could not be done right away for all the exhibits, so some of them still stand in the open. Although they opened in 1990, people began to arrive en masse only recently, only a few people had previously come in for the summer season, which is not particularly close to the city. Moreover, about 10 years ago the entrance to the museum was generally free and everything was done with own money (for more, see the official site). However, I think the situation has not changed much. At the moment, about 8 people work in the museum and they are immediately a master of all trades. And you have to sit at the checkout, conduct a tour, sell souvenirs, well, this is in addition to the restoration and household works in the territory. By the way, the founder of the museum, with whom we spoke, just sells souvenirs in the trailer, and only in the remaining time with colegi restores locomotives or mows the grass. As he told us, in summer, in general, it almost doesn’t work at restoration, and they can hire cheap labor only for very simple things and not always. The museum invites volunteers to help, if you wish, you can write to them.

So it turns out that the museum is not very developed, butand they cannot reduce / remove the entry fee, because then there will be nothing to develop, restore, and pay salaries to employees. Is this a divorce? Naturally, I do not know the turnover of the museum and its overhead, but I did not have such a question. More like an altruistic project from people who are deeply in love with their engine business. I don’t argue, maybe the founders simply don’t have enough business acumen, but something tells me, put a businessman at the head, so the price of a ticket would have taken off at all, and who would take up the museum, this is initially unprofitable business in our country. For reference, the entrance to the Museum of steam locomotives costs almost as much as in Iron Museum, only one thing iron to repair and maintain, another thing locomotive, not to mention the lease of the territory and the maintenance of the railway.

How to get to the museum

The museum is not in the Pereslavl-Zalessky,and 15 km away. You can only get on your own transport, the journey takes about 30 minutes, because the road is broken. After entering Pereslavl from Moscow, you need to turn left at the first major intersection that leads to the small boat Peter. Next you pass a small boat by, get to the village of Kupanskoe and in it, following the index of the museum, you need to turn left on a country road (sand). After 3 km it will lead you to Talitsy and there will be a parking lot at the entrance to them. Do not rush to leave the car here, because from here you have to go to the entrance to the museum. There is a parking right next to the entrance, and this long-distance is used as a backup, in case of an influx of visitors in the summer. The road from Pereslavl to Kupansky 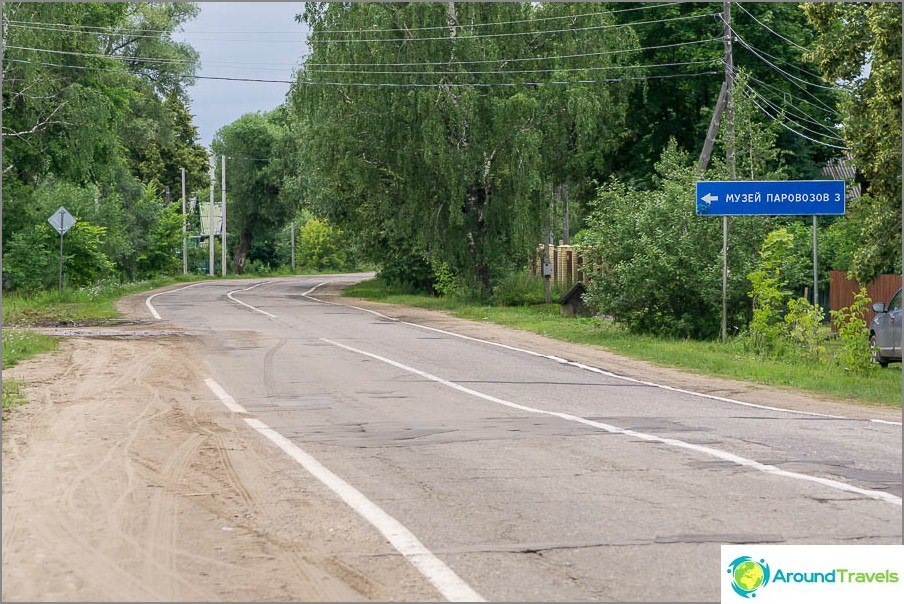 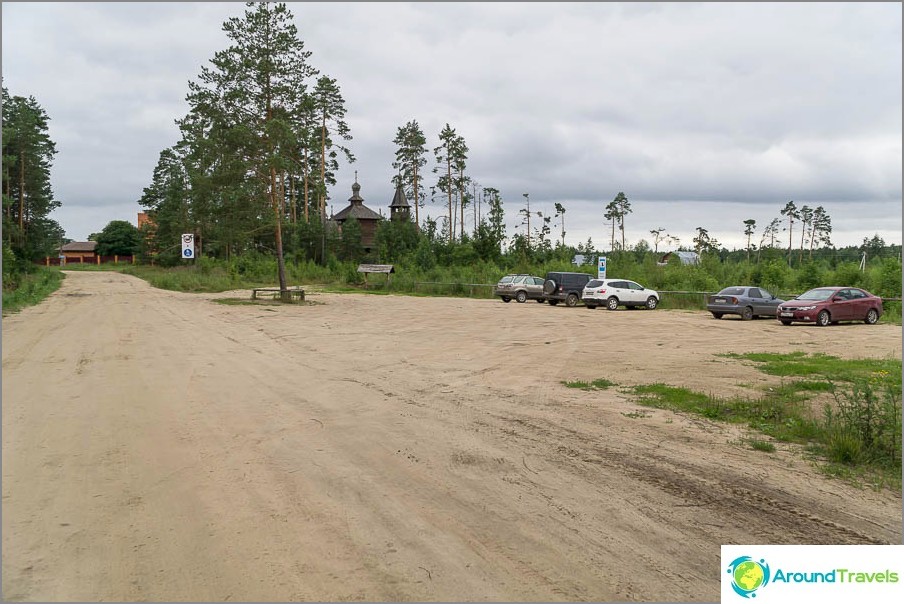 Long parking in front of Talitsy 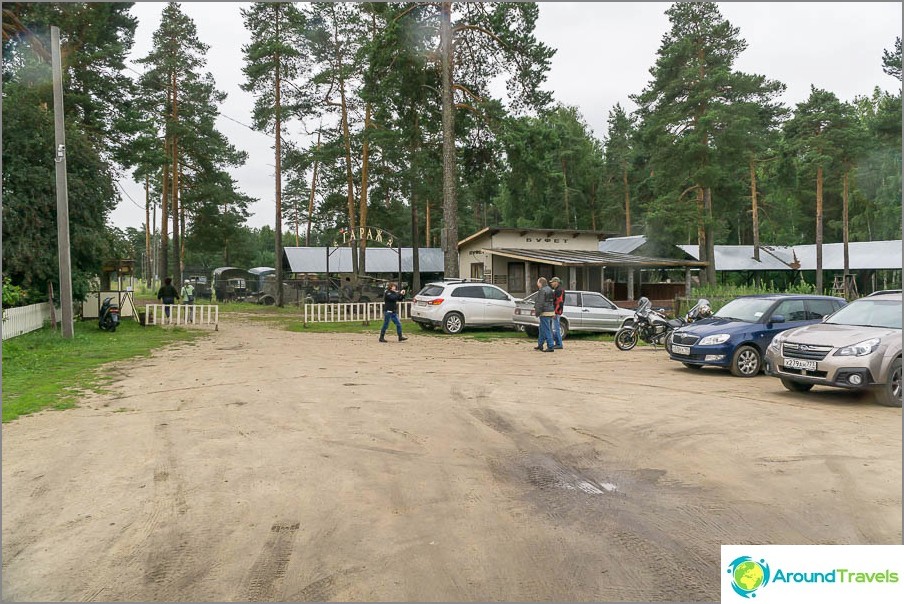 Near parking right at the entrance

Small, but interesting museum of locomotives with a difficult historyRead more