Today I want to bring to your attention ourThule Urban Glide stroller review, which we were given for a test. The stroller is not simple, but running! When I first heard about such a combination, I thought that it would not be in demand with us. But no, I have already found reviews that some parents buy directly for running. And it's great that the activity goes to the masses! Although, of course, most use it as a normal baby carriage, for it is amazingly comfortable. The closest analogue of the famous models of Mountain Buggy Terrain, only it is heavier by 4 kg, and costs twice as much.

Thule Urban Glide Sport Strollerpositioned as universal: for the city and for running with a child. There is one more model of Thule Glide (without the Urban prefix) with large wheels, a fully fixed wheel, here it is straightforwardly running. But I think it will be less popular, too narrow a niche. 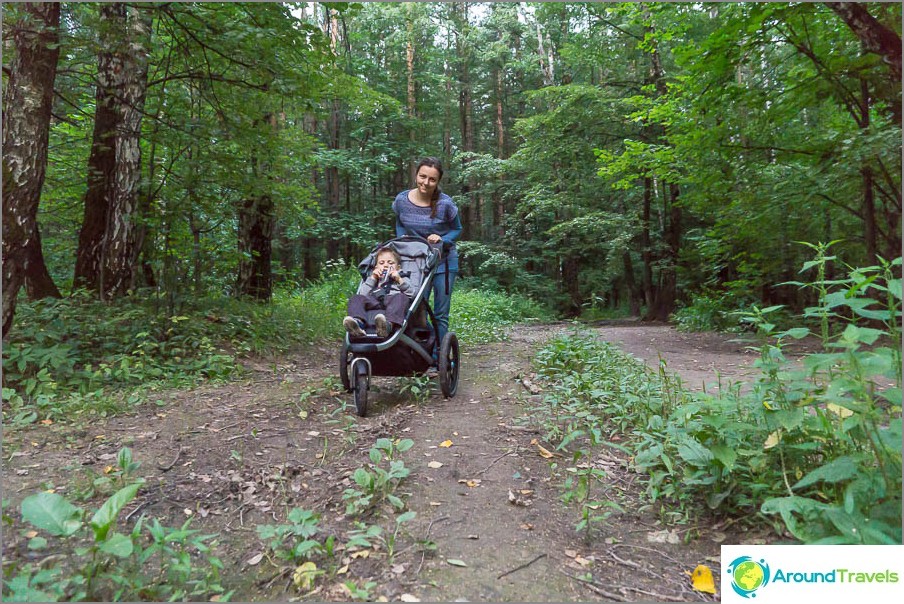 In the forest on bad roads 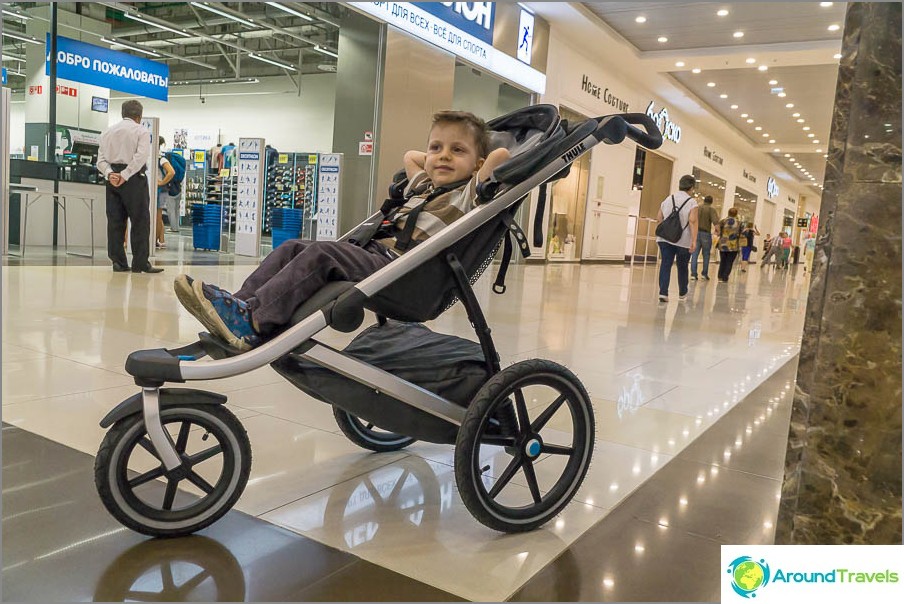 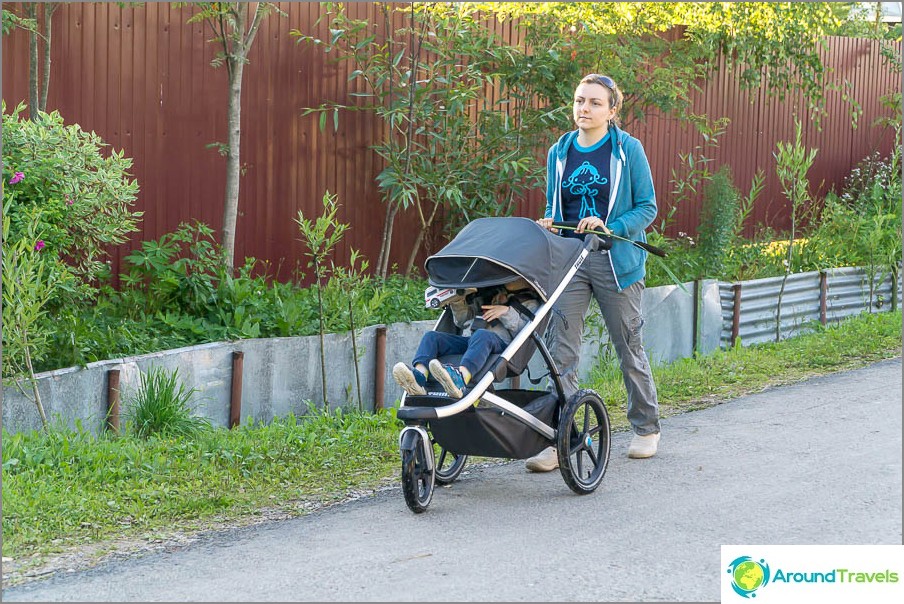 At the cottage and on the usual asphalt 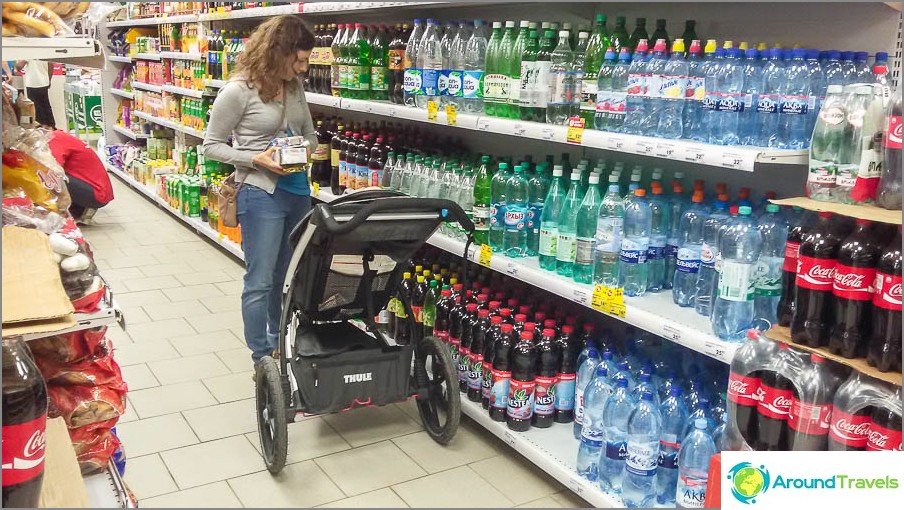 In a small supermarket near Moscow

There are no photos during the run, but this process is captured on video.

Let's move from numbers to impressions. I think you already understood that we really liked the pram. The first thing you pay attention to is how well it is made, it's nice to even touch it. The second thing you notice is control! No, I knew that tricycles are easier to steer, but to be so maneuverable ... I don’t know how fragile women are (although Daria liked it too), but I can easily control Urban Glide with one hand, which is very useful in some situations. Moreover, it has such an easy course that even on a small slope one cannot leave it without a brake, it will roll. Well, and lastly, you would try to fold it, we have not had a single baby carriage (and we have already changed 5 pieces), which would be so easy to fold, she does it herself. In the video, I filmed this process.

Enumerate the various nuances of the points. 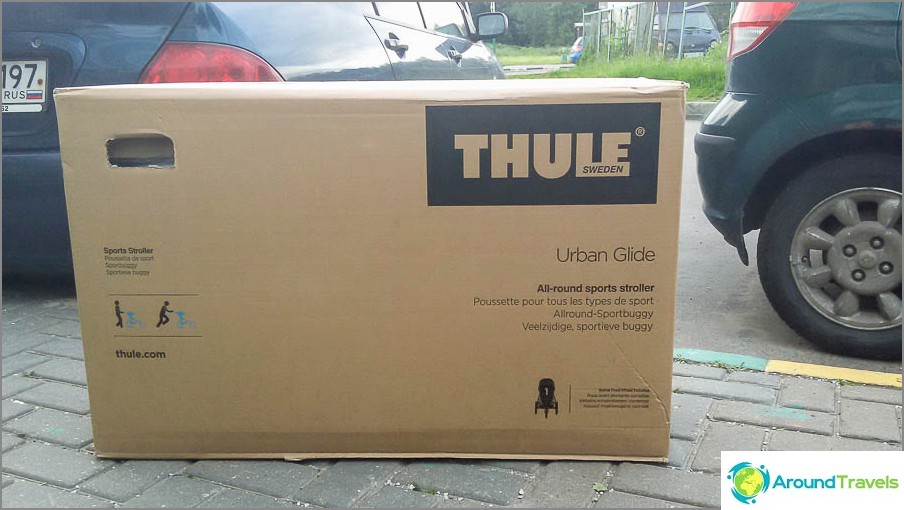 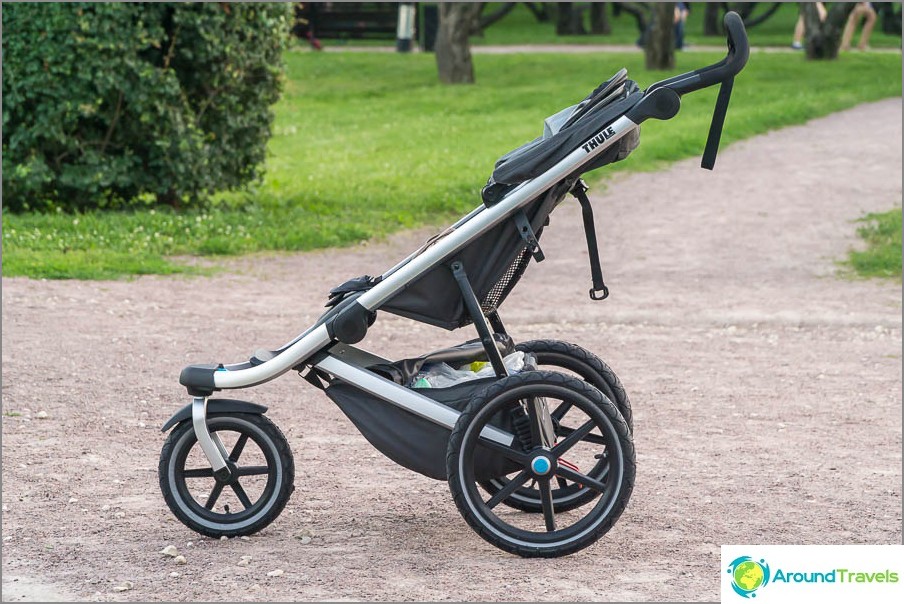 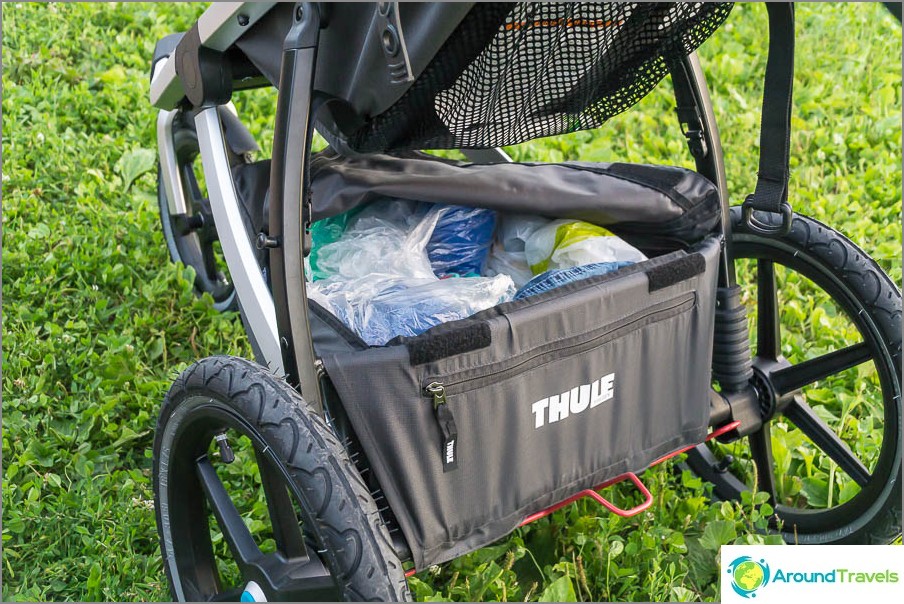 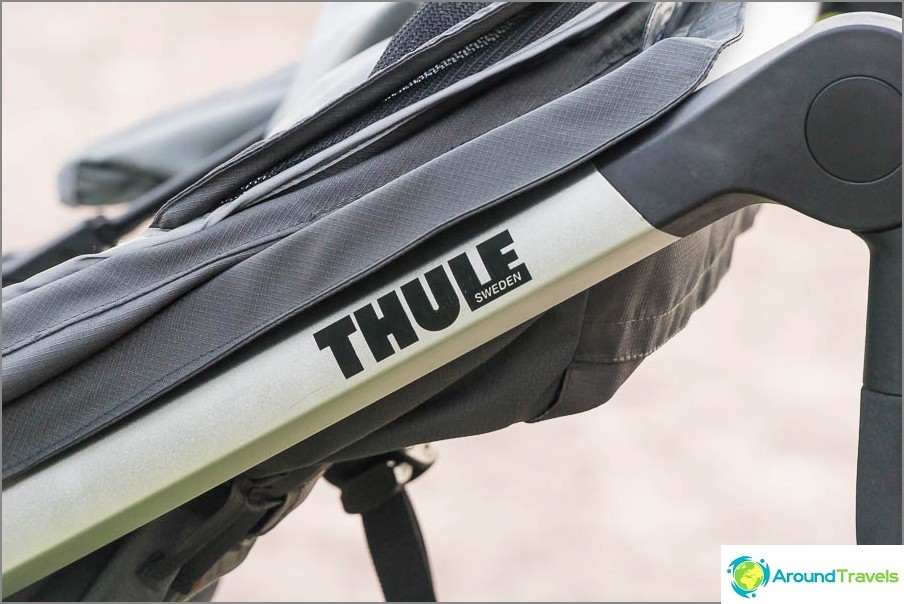 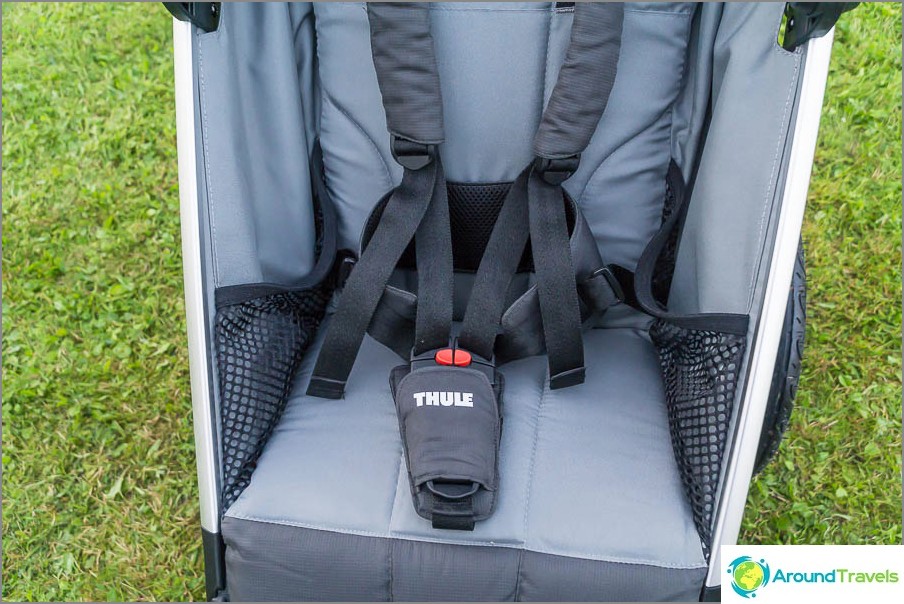 Five-point belt and pockets on the sides of the seat 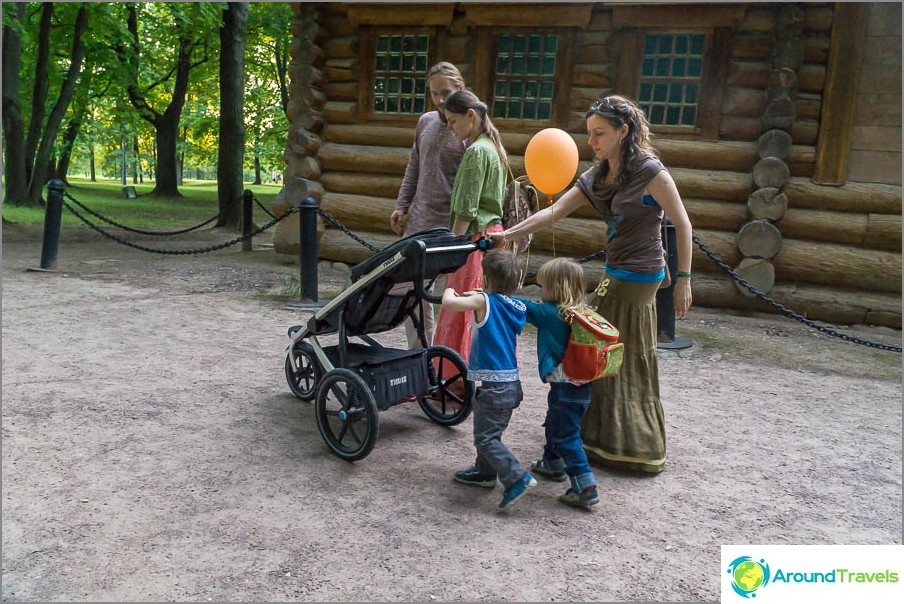 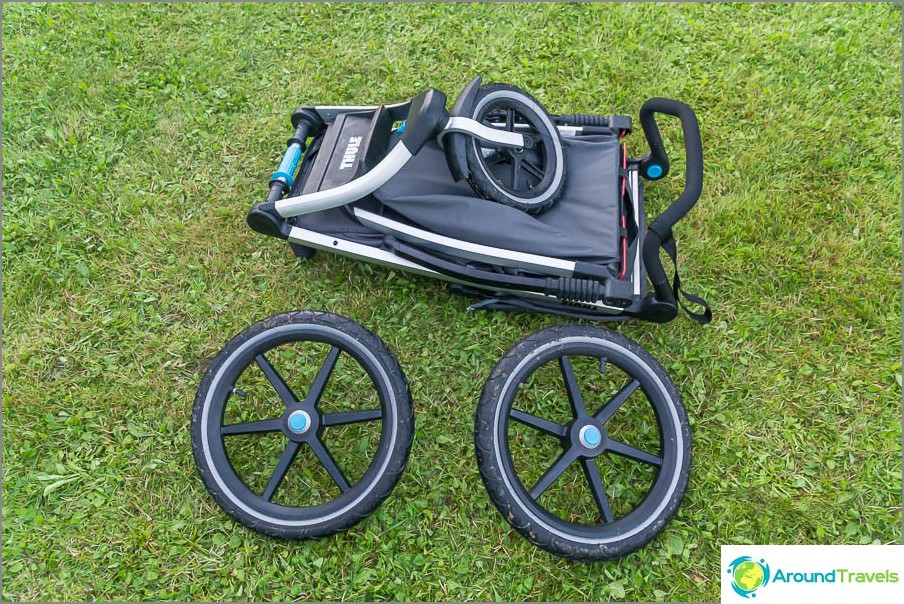 With folded and removed wheels 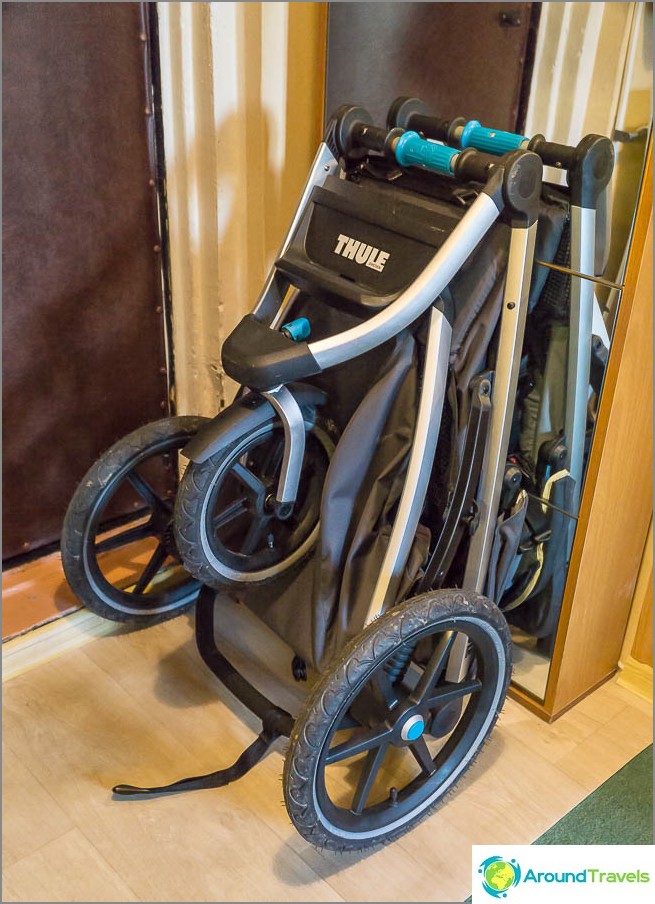 In a complex form itself is not worth it, you have to lean against the wall

The only thing that does not fit much inRussian realities - a combination of wide rear wheels and small shops and elevators in residential buildings. In Auchan and Perekrestok, you will enter and purchase without problems, but in a small store where you install either a narrow door / ramp, or narrow rows available, it will be crowded. In some places do not go. The same with elevators, for example, in our house we are placed with a carriage in a small elevator (we also have a cargo), and it comes with great difficulty for the parents to come into the elevator, we have to push the doors apart. However, this is more the problem not of this particular stroller, but of our stores / elevators, because with the usual pushchair there too, the way is ordered.

Do I need a stroller to run with a child

I am not an athlete and I run occasionally, but inOverall I liked the idea. In reality, there is such a situation, when there is half an hour of everything, and you can combine the benefits for yourself (to run) and for the child (to be in the fresh air). Only now it is desirable to choose surfaces for running equally, because if you run along ordinary streets, congresses, curbs and other elevations are strained, although the wheelchair absorbs, but the child jumps at each obstacle. I will not say that this is directly critical (the child did not express displeasure), but I personally would like more even streets. I can say the same about our woods driven by quad bikes, you don’t run around with a carriage, however, it’s not super comfortable to run there without it, and you won’t walk with a regular carriage at all.

Ideally, it should be compared with other runningstrollers, but I do not know such others. Therefore, there is only one experience. At first it is very unusual that the hands are in a fixed position, but after 5-10 minutes you get used to it and run, as if nothing had happened. Daria said about the same.

P.S. Our usual stroller Peg Perego Pliko Mini did not last even a year, our potholes finished it off. More precisely, it is alive, but some loose now. Let's see how Thule will behave.

The list of things on the hike - our experience