Pattaya Beach - the center of life of a big city

What can you expect from the beach in the center of a largebustling Asian city, along which, moreover, passes a busy road? Not everyone dares to swim at the beach of the center of Pattaya. Rather, it will be roaming tourists and local children. The water at the shore is dirty, you can see floating debris in it, empty bags.

In principle, they try to follow the purity of the beach -the pavement is carefully swept, rows of sun loungers are arranged in orderly rows, palm trees are turning green and rustling in the wind, the sea is pleasantly splashing with waves ... But since this is a busy center of the city, somebody is always sitting on the wide steps of the embankment and eating something. Around, according to the Thai tradition, they sell all kinds of food and various goods.

Often on the beach a variety of folkcelebrations and holidays. All this makes the struggle for the purity of the beach rather difficult. Many see rats on the beach at night, and terrible garbage in the water. In addition, poduglyavshie tourists often do not behave in the best way. Despite all this, however, during the day and at sunset the beach looks quite idyllic.

Especially for those who like to be in a crowd. A lot of people always come to watch the sunset, Thais (and tourists alike) spread mats and arrange traditional collective picnics on the beach. It is also nice to sit in a lounge chair with a bottle of something that you think is delicious, penetrating the pulsation of life in this somewhat peculiar Asian resort.

Pattaya Central Beach is shaped neat.symmetrical arc length of almost 4 km. The width of the beach varies depending on the phase of low tide, in addition, there are wider areas and less. At high tide, the average width is about 16 meters, at low tide the beach is much wider. The sand on the beach is fine, yellow, interspersed with small pebbles.

In the north, Pattaya Beach is bounded by a cape, beyond which begins Wongamat beach, on the southern end of the beach is the famousVolkin Street, behind her pier, from which ferries go to Koh Lan. Behind the pier, the beach ends up in a cape with a lighthouse and a park, where the huge red letters PATTAYA are located, above them, on a hill - an observation deck with a great view of the city center and the beach.

During high water the beach remains onlya small strip, especially where there are many rows of sun beds. The bottom is muddy, at the northern end of the beach is dirty. Near Volkin Street and further, at the pier, urbanization reaches such proportions that it only draws hypothetically into the water. Entry into the water in most places on the beach is not very sharp.

Along the beach there is a wide sidewalk, set uptall palm trees and even along the edge of the pavement, from the beach, trees grow, but not in a continuous strip, with gaps. Sun loungers under umbrellas are also not completely, islets, but on a lot of rows. On Wednesdays a day without sunbeds. Natural shade can be found in principle, but usually there are many not only holidaymakers on the beach, but also locals and merchants. So not everyone has enough space in the shadows. 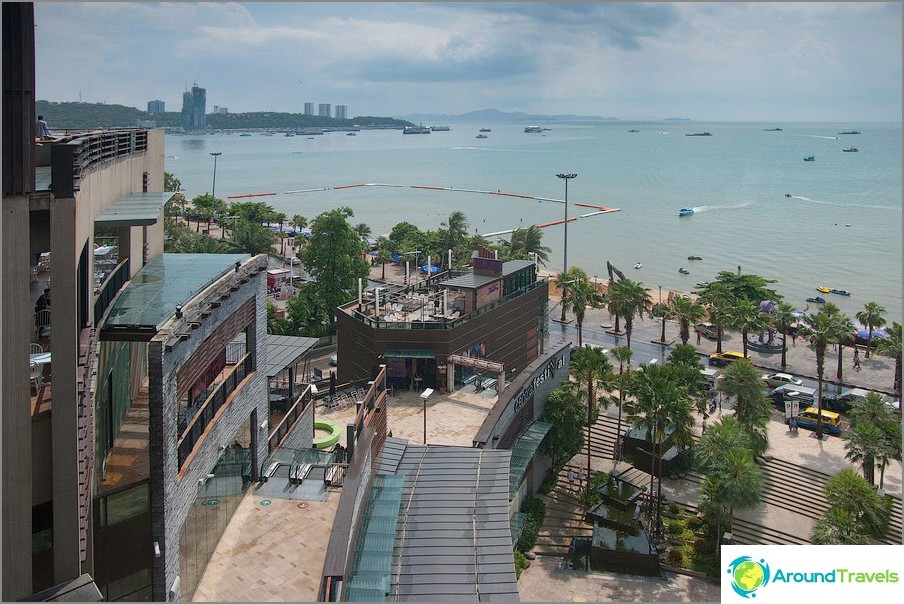 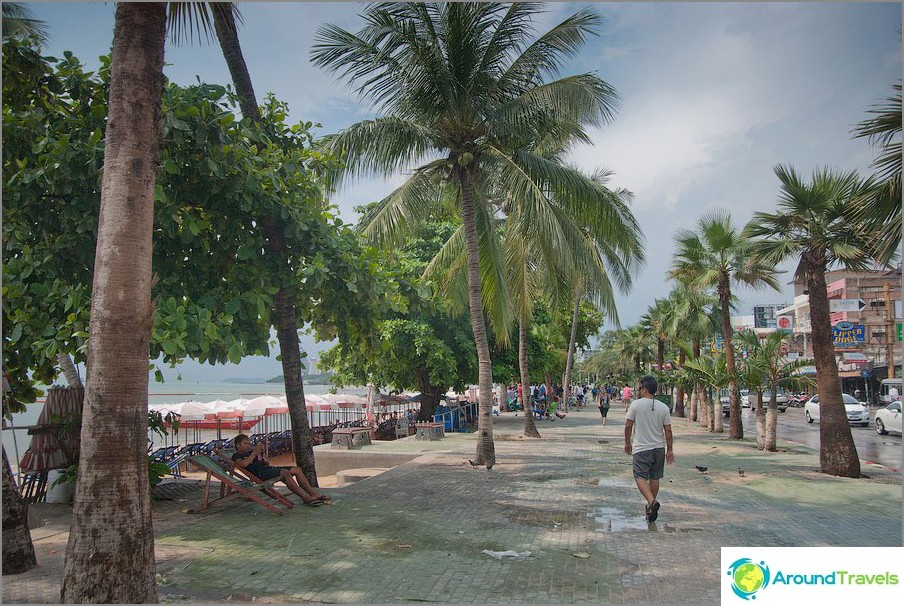 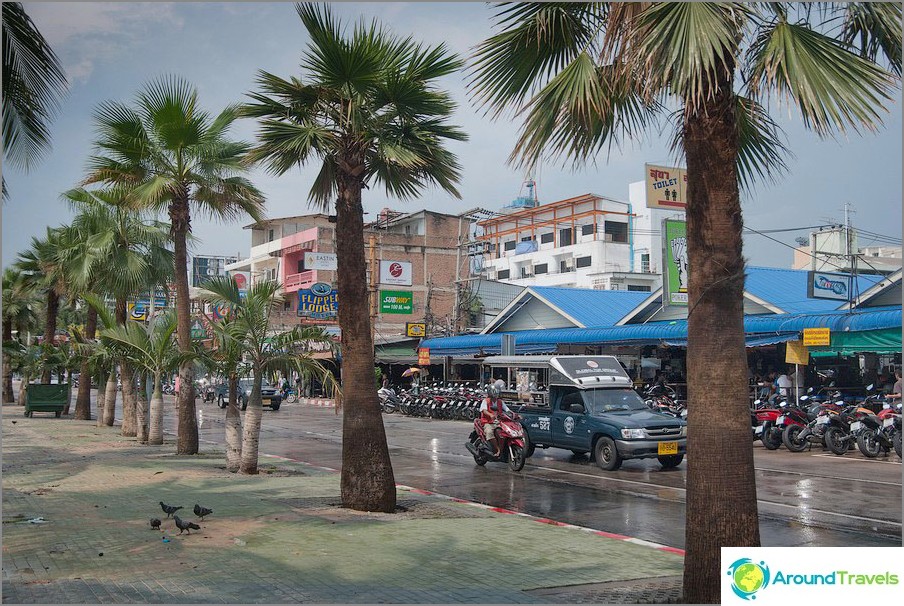 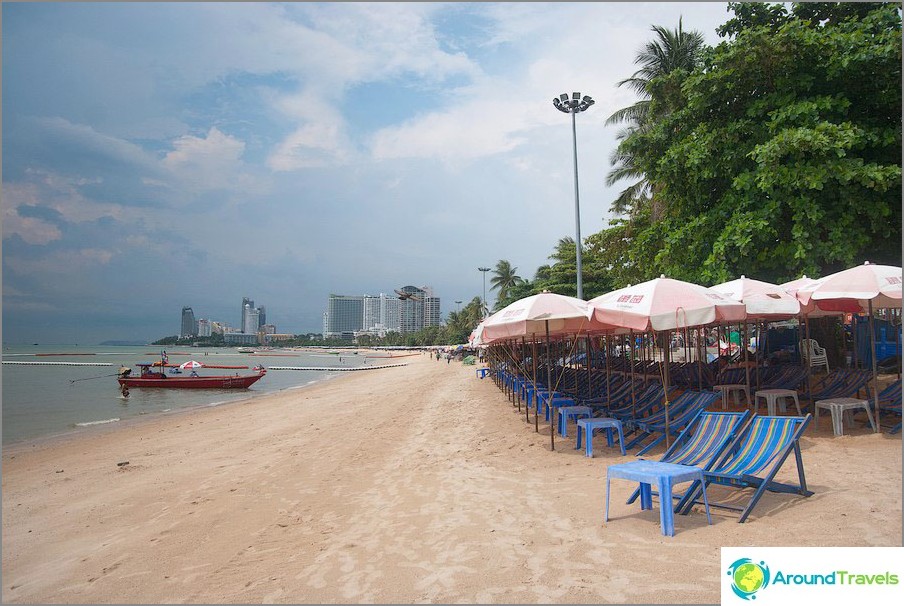 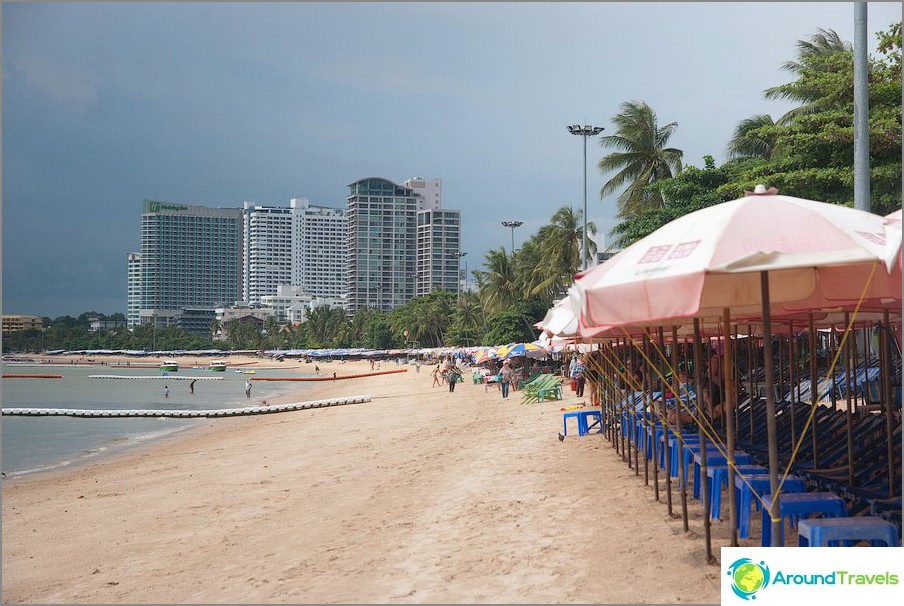 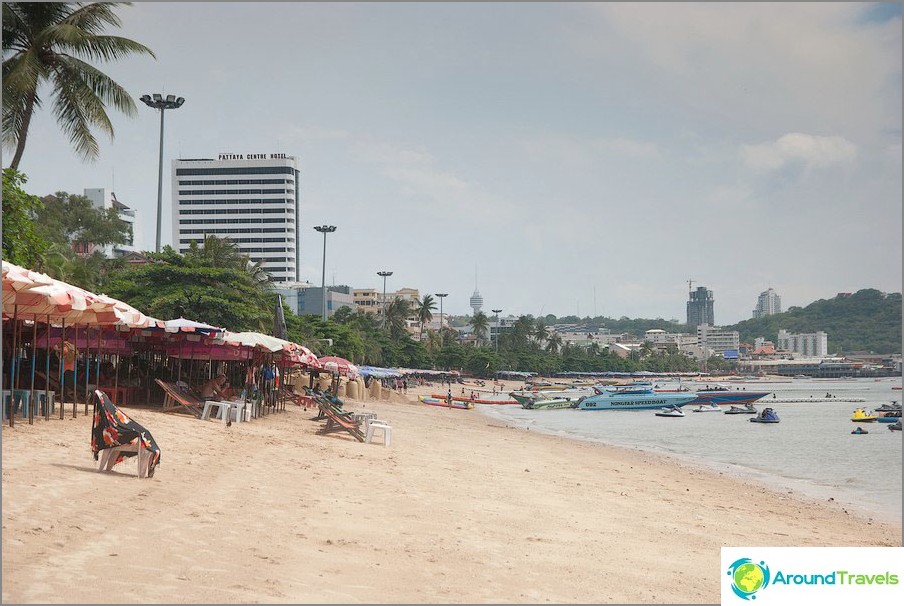 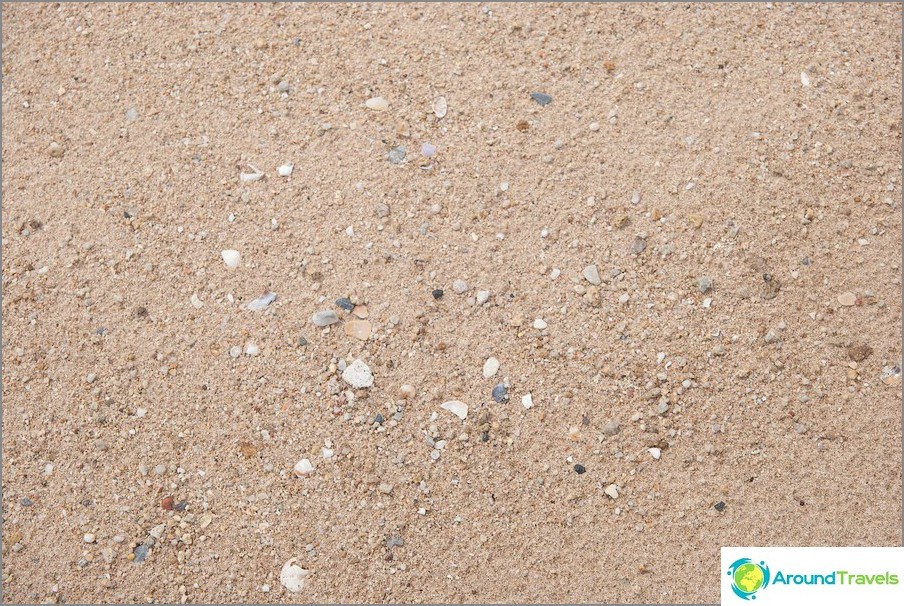 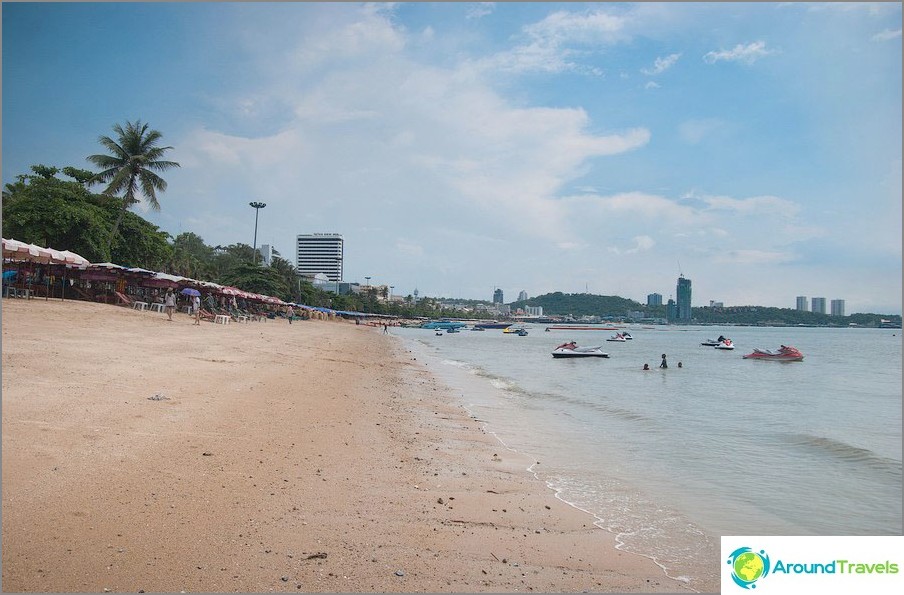 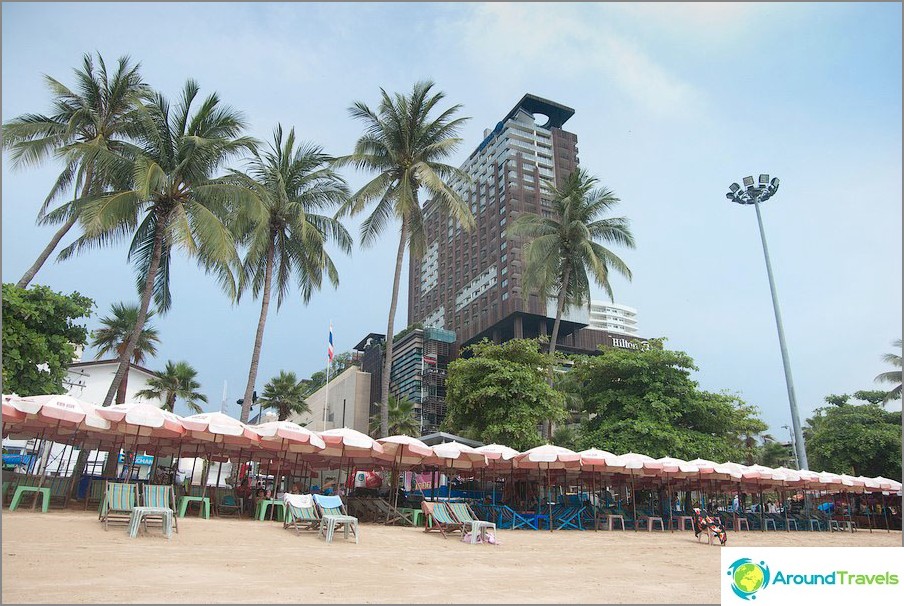 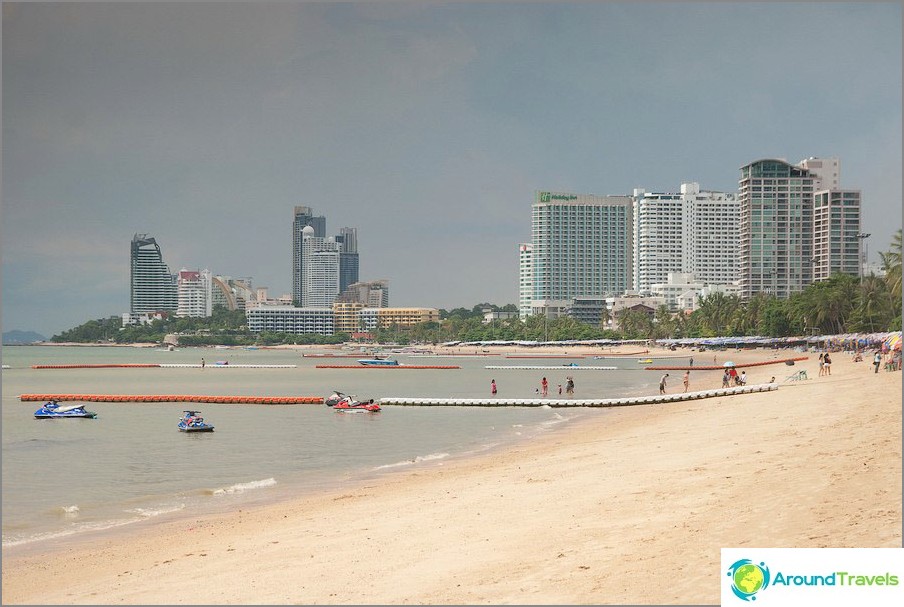 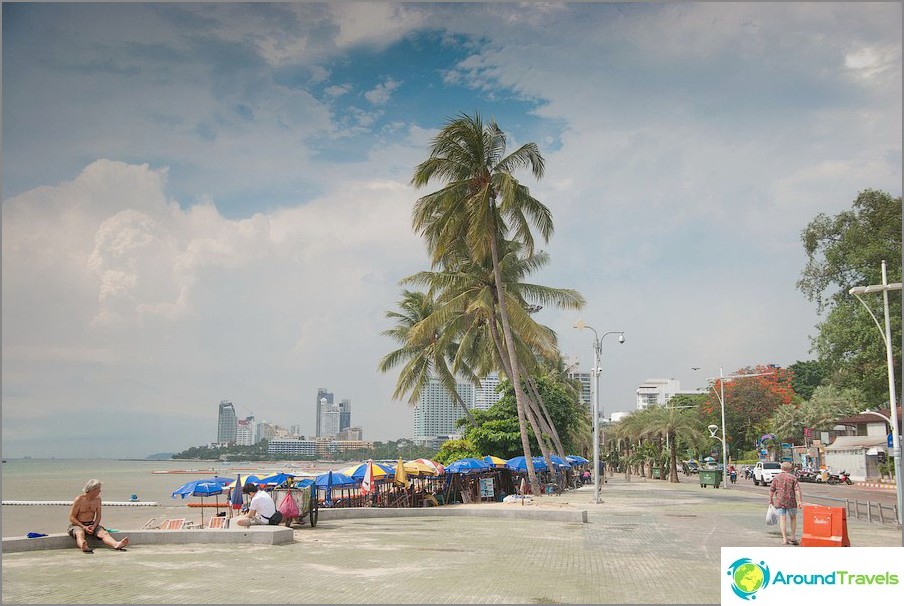 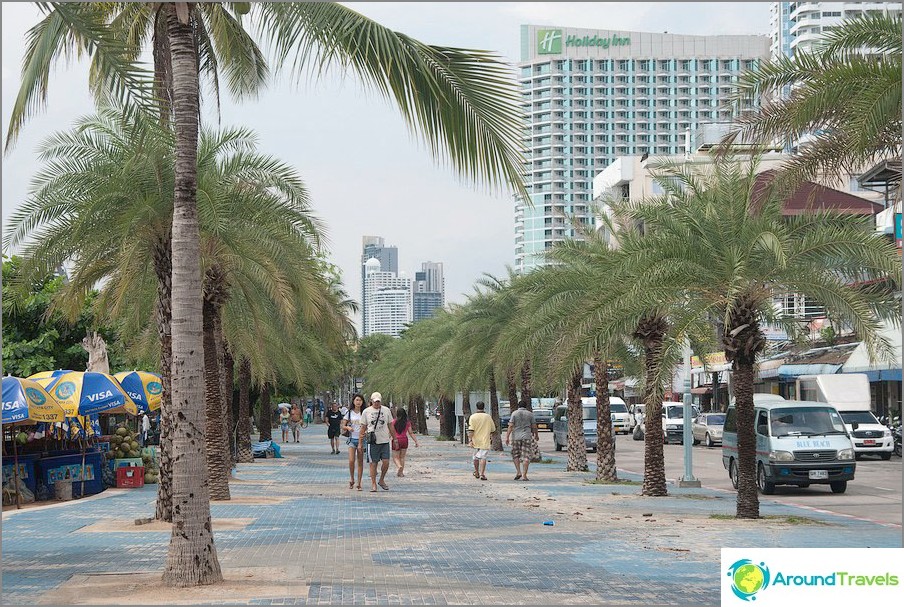 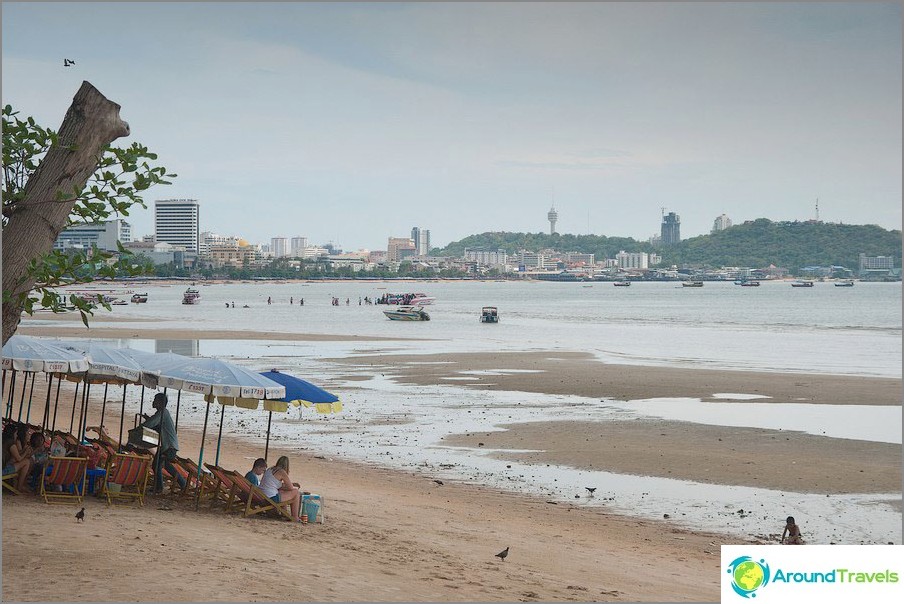 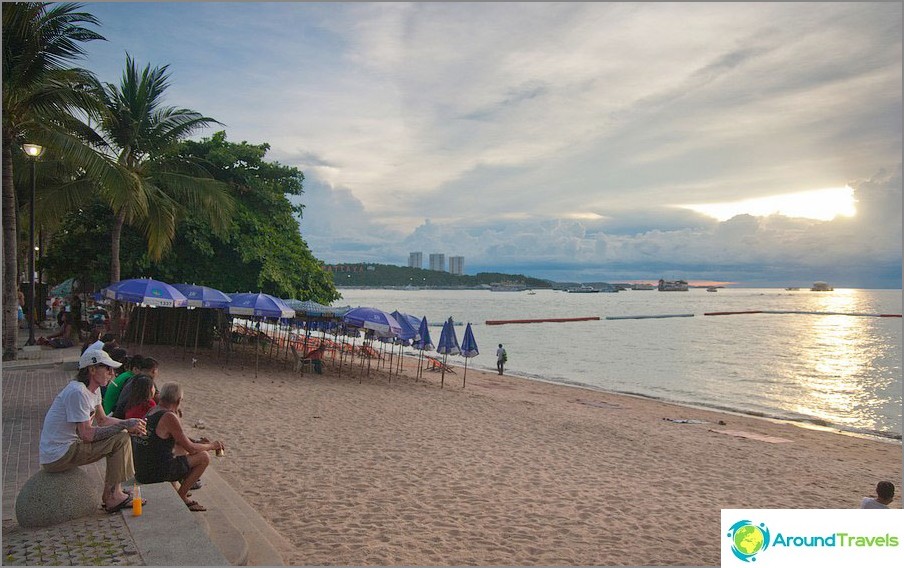 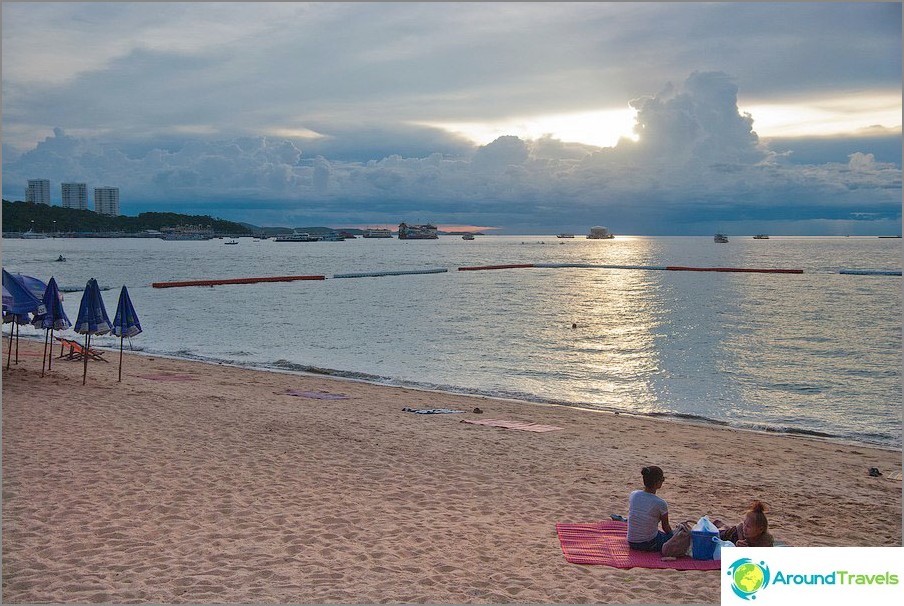 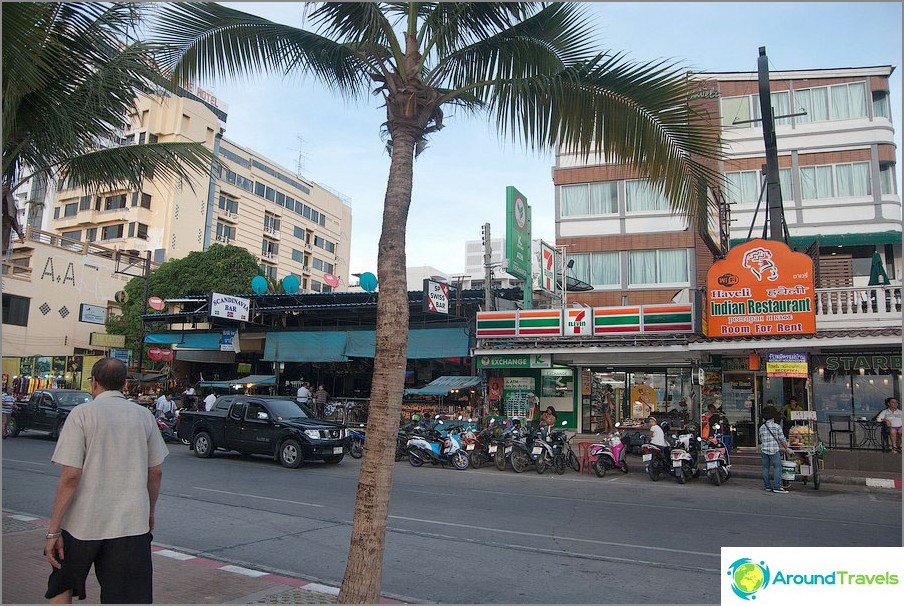 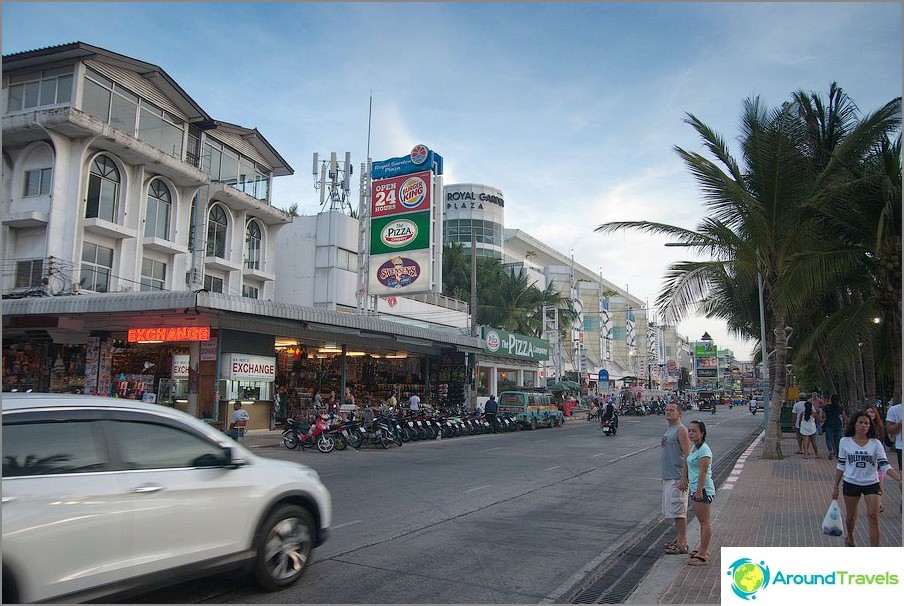 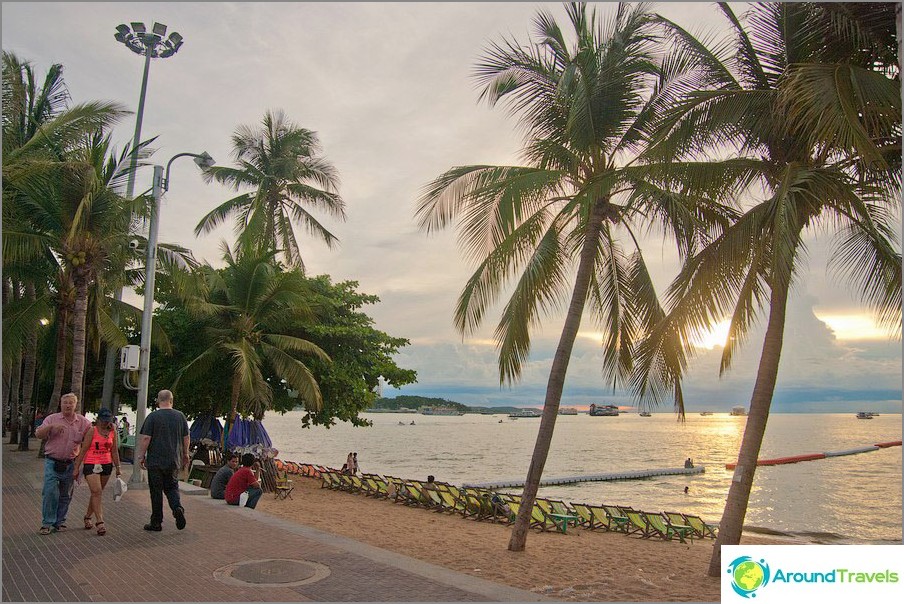 Since this is the very center of a large touristcities, along the beach there is generally everything that a rich imagination of a tourist can wish for. Shopping centers, such as the Central Festival and Mike Shopping Mall, have fronts facing the road along the beach. On the second road, in the northern part of the beach, there is the Big C Supercenter.

On the sidewalk along the beach come across trays within the evenings, and especially during the holidays, they also sell all Chinese small things from trays in the evening. Across the road from the beach there are many shops 7-Eleven and Family Mart, just Thai shops and stalls, markets, cafes and restaurants. From clubs, cafes and shopping consists of the famous Walking Street.

Sights around too missing. The southern part of the beach ends at Walking Street and, behind it, a cape with a hill. There is a park with huge red letters PATTAYA, an observation deck and a large golden statue of Buddha. On the first beach street there are also the Ripley Museum, the Teddy Bear Museum, the second beach street - the 3D gallery of Art in Paradise, the Alcazar show and many others.

Closer to the north, not far from the center, there are several large gift shops (Otop, Lukdod) and the Gems Gallery gem factory.

All accommodations are located behind the Beach Road (Beach Road). Among other things, there are several high-rises with expensive hotels:

Budget housing is also there, but a little deep in the streets, without a sea view. A condo can be found, but it will be the very center of the city with all the drawbacks of such a location.

There are almost no houses for rent for a long time, but you can find a small hotel with green territory. For example, Twin Palm Resort

- with garden and simple rooms.

The beach is right in the center of Pattaya, along itthere is a busy road - Beach Road. On the southern edge of the beach goes to Volkin Street, one of the symbols of Pattaya. Also in the center of the beach, across the road, there is a brown high-rise, at the bottom of which is a large shopping center Central Festival, and on the upper floors - the Hilton hotel. Behind the first Beach Road, parallel to it and the beach, is Second Beach Road, further along parallel to the coastline there is a large Sukhumvit road, along which intercity buses run, including from Suvarnabhumi Airport and Bangkok. Pattaya Beach and Sukhumvit connect three large roads: North, Central and South. On these streets go regular tuk-tuki.

If you come to the North Station or StationTappraya Road, from there by public transport you can easily reach Beach Road or Second Beach Road in the center of Pattaya. Traffic on these two streets is one-way. According to the first - from north to south, on the second - from south to north. From Sukumvita, it is possible at one of the three intersections (from North, Central or South streets) to transfer to a scheduled tuk-tuk to the city center. In the opposite direction, from the center to Sukhumvit, they can also be passed. In addition to public transport, you can also take a taxi (in the form of a tuk-tuk or a car or moto-taxi) from almost anywhere in the city.