Represents severalattractions in one place. The tower itself with a viewing platform above and around it is a large park. Since the tower stands on a mountain, then you can get to it with the help of a rail funicular. It looks like a tram, only the trailer here is made at an angle.

In preparation for the trip, I noted that whenThe high rating of the tower itself, the tram (as a means of transportation and review) had many negative reviews. It was even thought to abandon the trip and climb on foot. But in fact it turned out that for a real understanding of things, all reviews should always be checked personally.

The fare for this tram is included inthe cost of a ticket for travel around the city. You bought a ticket for 24 hours - and you use it quite calmly. I do not understand the disturbances in the reviews, where the people write that they have to pay for the fare separately. Do not. Although even if it were so, then this is ordinary urban transport and why should it carry you for free?

In the end, I went up to the tram, andwent down then on foot. Let's just say - this is the light version of the walk to the mountain. If you are an athlete and are not afraid to sweat - then the footpath will help you. With a deep degree of fanaticism, you can even run up the hill, as many local zozhniki do. The slope is quite gentle and does not give a large load on the knees.

The time for getting on the tram is about 10 minutes. There is a stop on the way up, but there is no need to leave - the tower is at the end of the route. The Petrshinskaya Tower is metal, and by the interlacing of metal beams, it vaguely resembles the Eiffel Tower. Although visually, I would say, it is completely different. I climbed to the very top, to the observation deck, from where views of Prague are opened, with a 360-degree panorama. 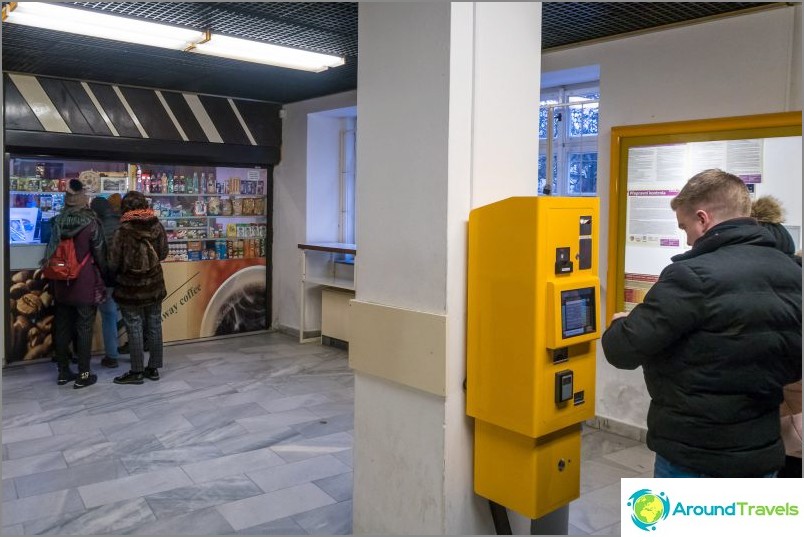 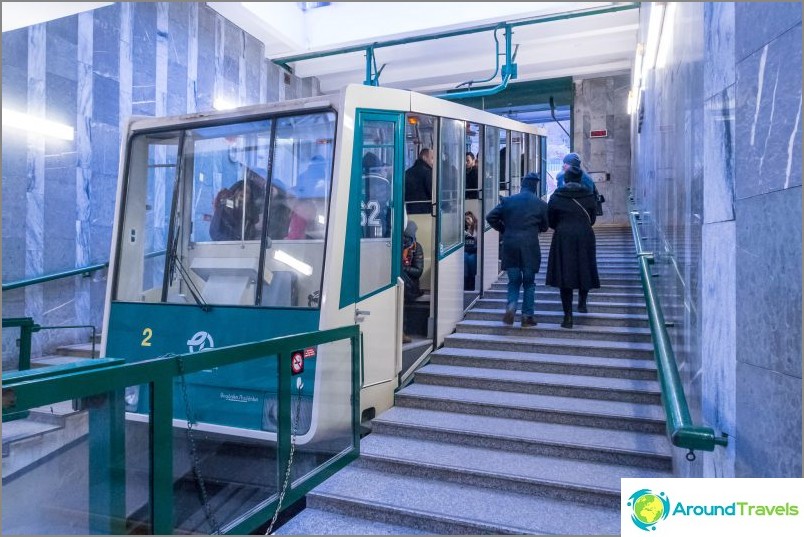 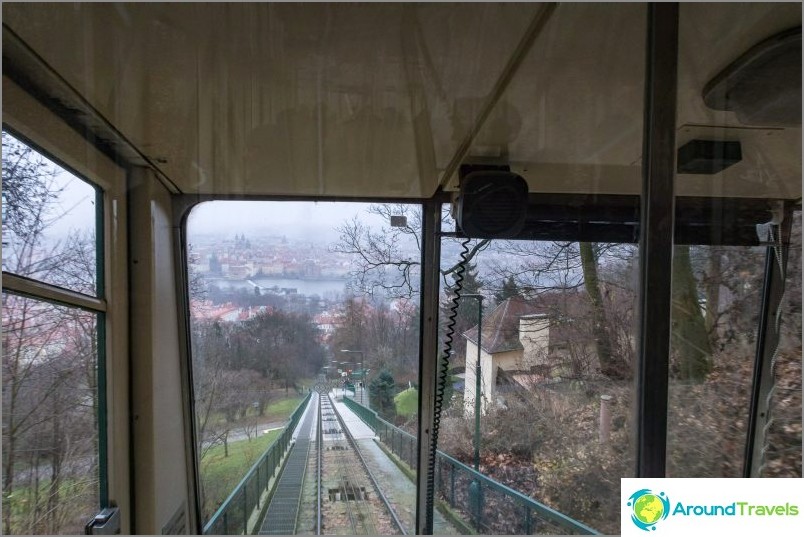 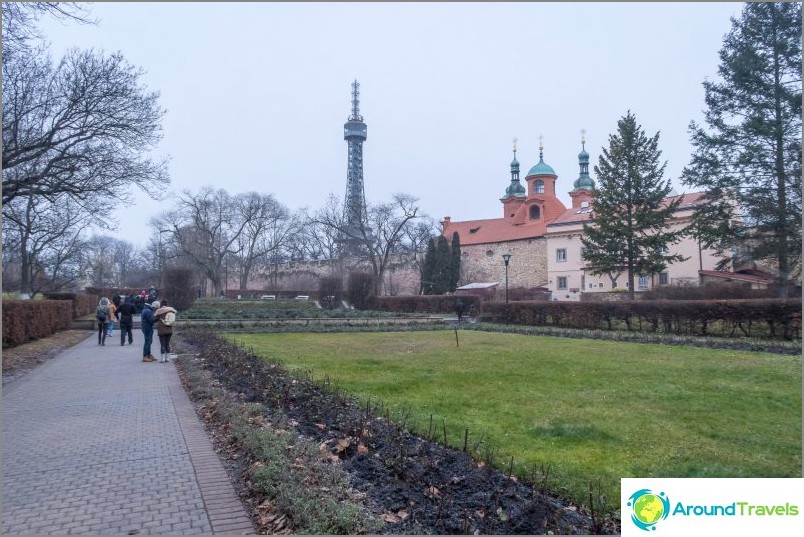 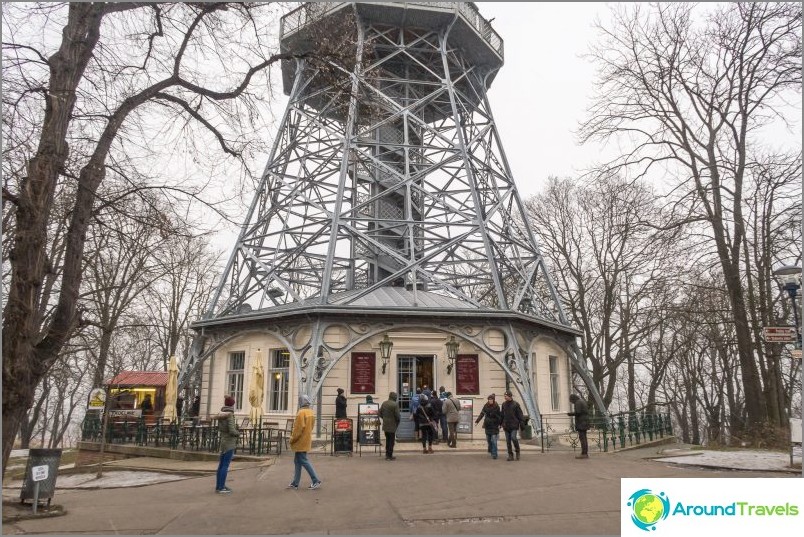 Weather permitting, there is a terrific review, and me,as always no luck. As soon as a decent viewpoint comes across, it immediately begins to rain, snow, fog, avalanche, in general - some kind of personal rock of mine. Moreover, the morning began with the sun, but until I got to the tower the weather turned bad.

Entrance to the tower is paid, but I would not say thatvery expensive. You can buy a ticket just for a review and go on foot. You can immediately complex, with an elevator (fee for using the elevator - separately), if you do not want to climb the spiral staircase. To rise not for long, 5-10 minutes depending on your physical form. I climbed the elevator purely out of curiosity - which one would be an overview and generally wanted to ride. 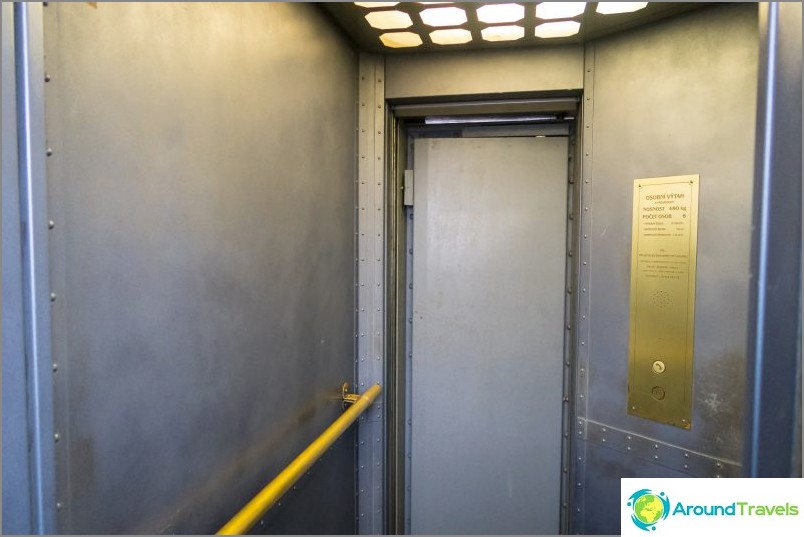 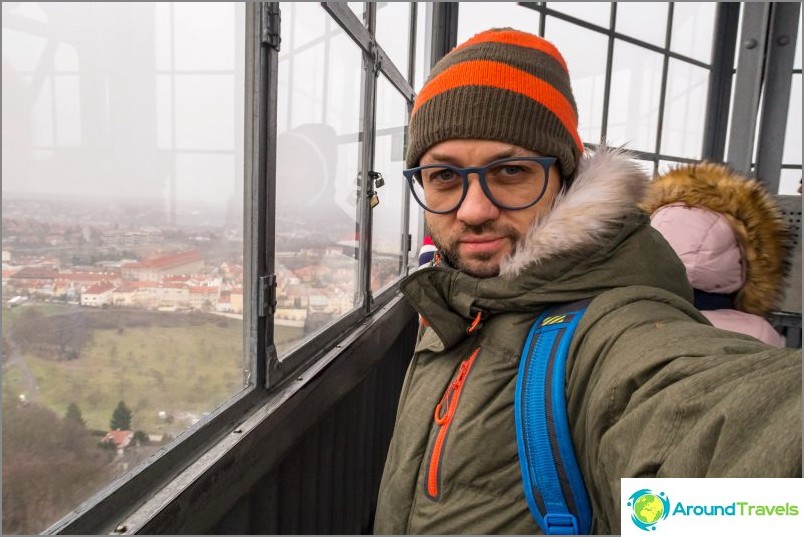 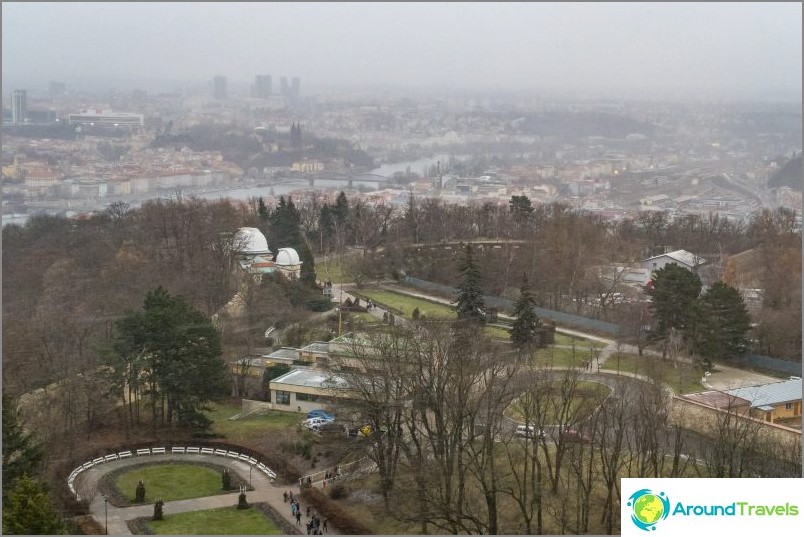 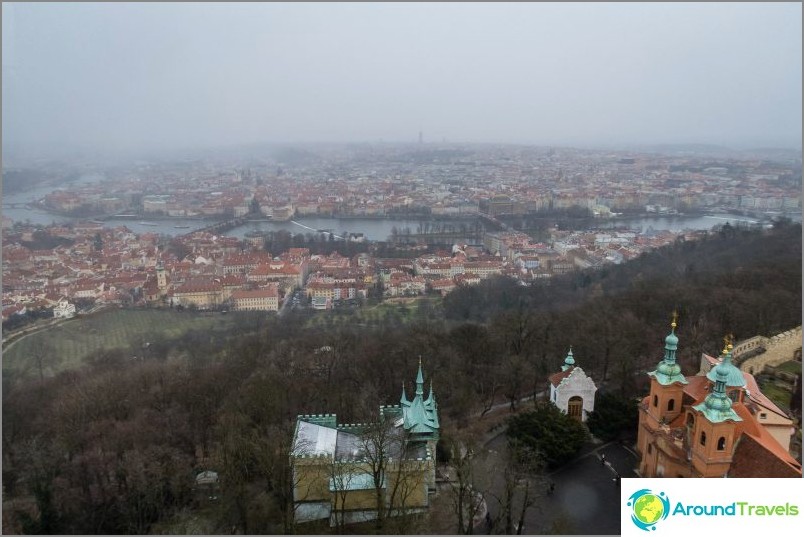 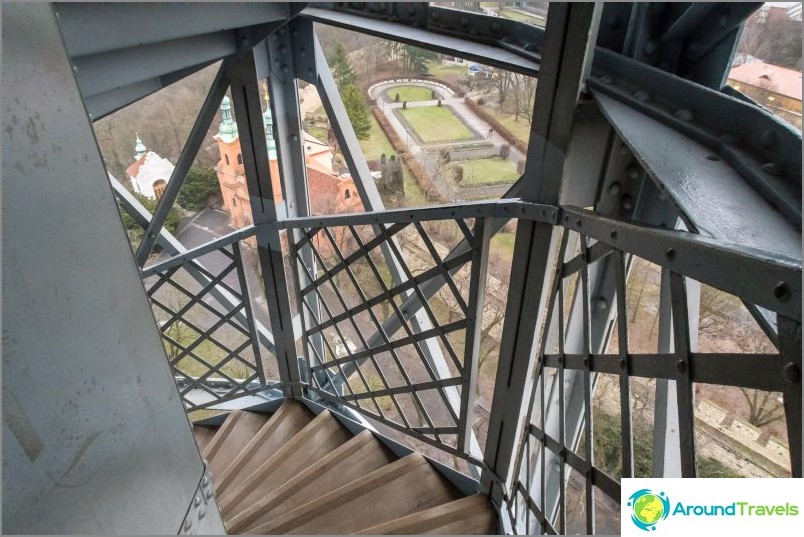 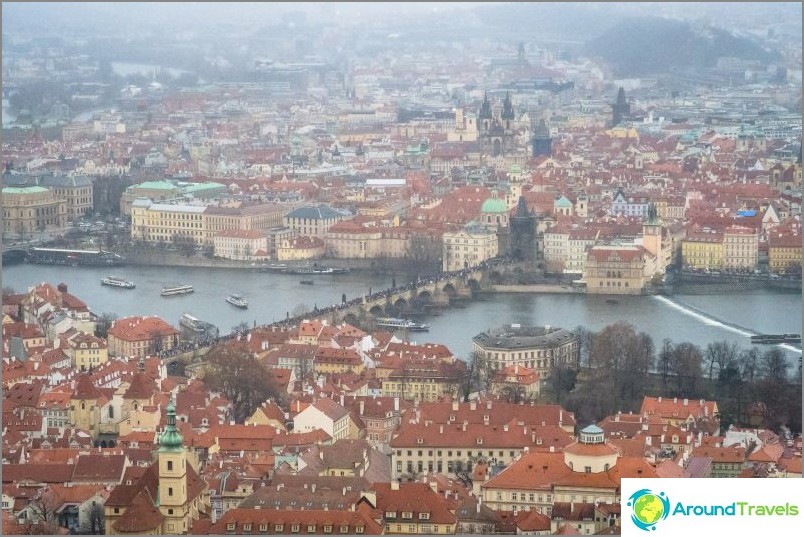 As it turned out, inside the elevator is more likethick-walled safe some small, massive and armored. His doors are not closed like a normal elevator, but lowered vertically. It is completely closed and panoramic views on the way up you will not see. It is much more interesting (and harder) to climb and descend the stairs - and there are two of them: the descent and the ascent.

Walking up the stairs you can see Prague 360degrees, and I have a little life hack for you. If the glass on the observation deck of the tower is dirty, then you can go down this stairs a couple of spans. There will be a great view without dirty glass. Below the main observation deck there is another, open type, which you will not know about if you take the elevator. 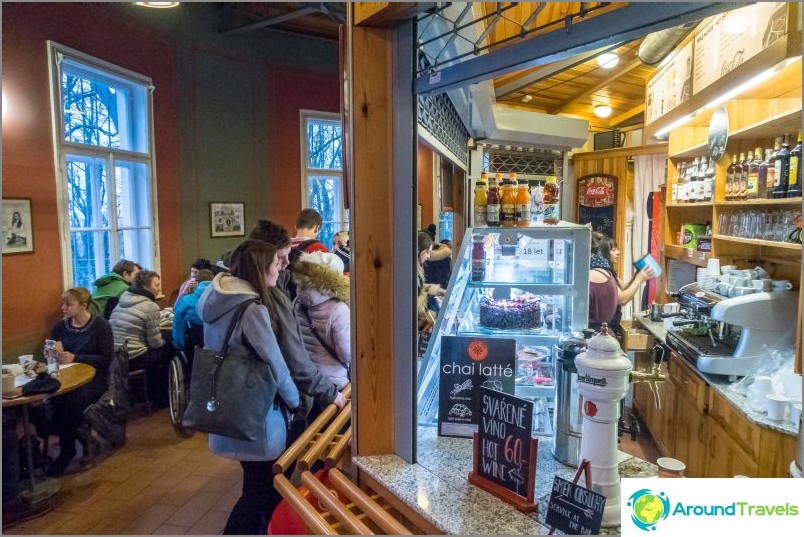 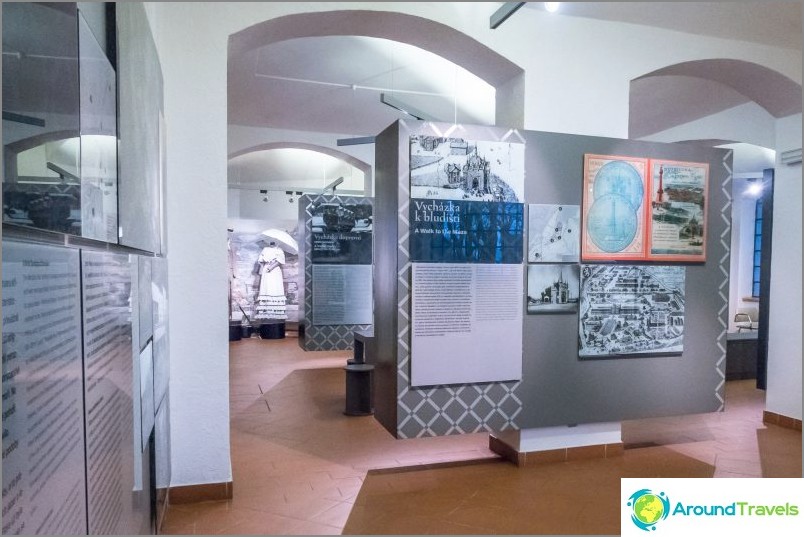 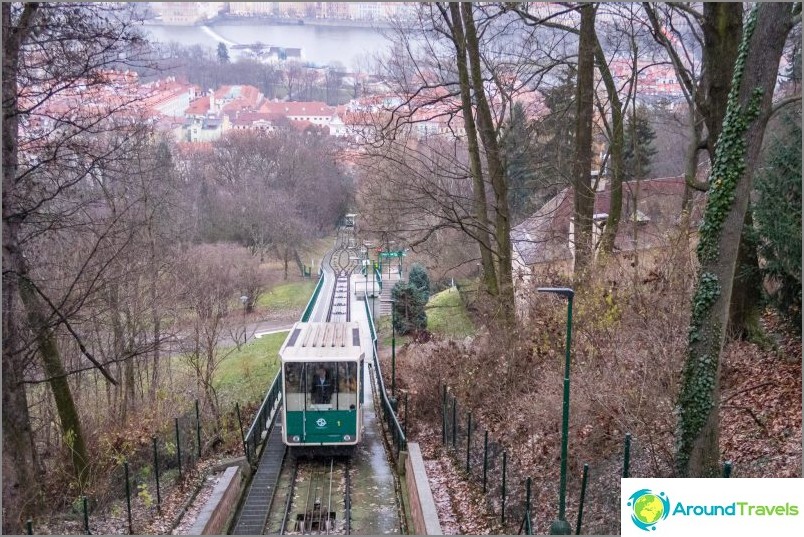 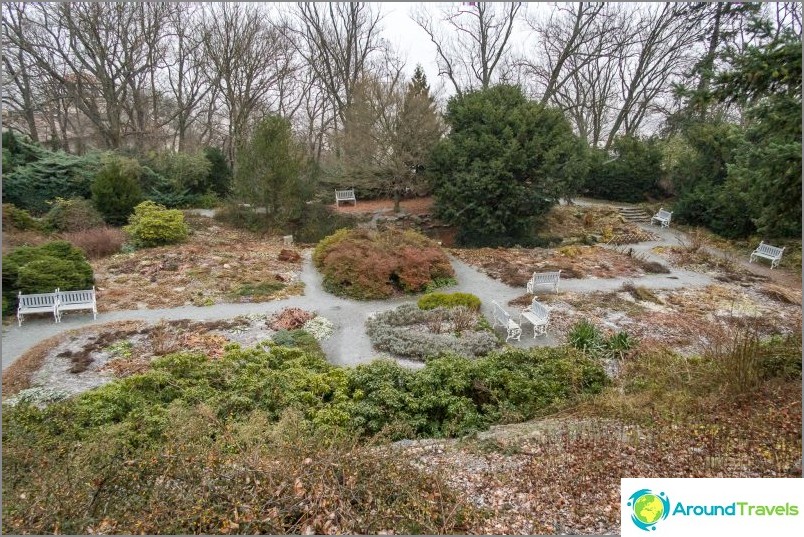 In the network I found information that the idea of ​​the towerbelongs to the initiators of the Czech Tourists Club, which had a burning idea after visiting Paris in 1889. In four months, 175 tons of steel structures were embodied in a 60-meter observation tower, which it has been since 1891.

However, in 1953, another 20 meters was attached to it. The city authorities decided to use the Prague Eiffel Tower for more prosaic purposes: the first Czech television station was installed at the top.

In bad weather it makes no sense to come here - the view is sad. If you climb on foot, get ready for the constant wind. In winter, the park at the base looks very unattractive.

The tracks in the park are good, there are both asphalt and dirt roads, and for users of maps.me there is a complete circuit of the tracks of the park - I recommend using this application.

Toilet for a fee, 10 kroons, but for a coupon from a cafe (near the cashier's office) - 5 kroons.

Rail funicular: 24 crowns for a ticket for 30 minutes, 32 crowns for 90 minutes (you can return on it). The ticket is activated, as well as in the subway, you compost at the entrance to the station. If you buy a ticket for 110 CZK for 24 hours, then it will be possible to ride around the city on this tram all day. 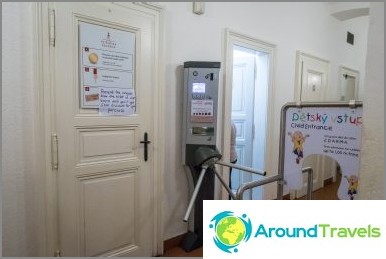 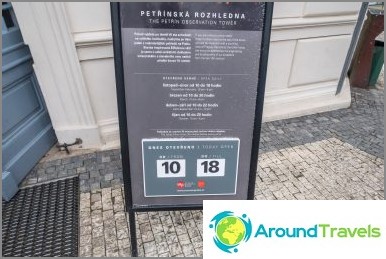 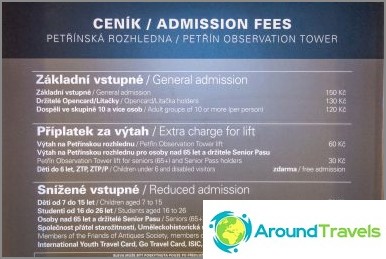 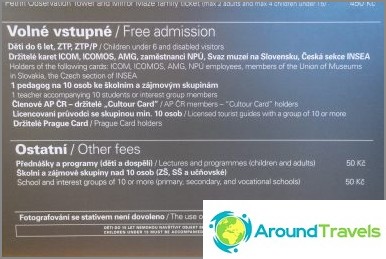 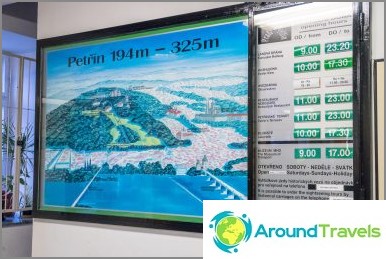 Petrin Tower
Metal tower 60 meters high. At 50 meters there is an observation deck.
Read more about the tower. 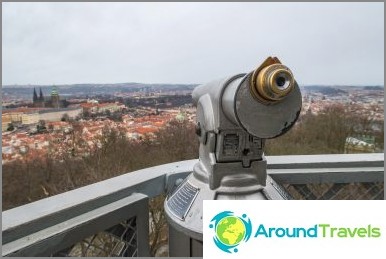 Metal tower 60 meters high. At 50 meters there is an observation deck. Read more about the tower.

The dancing house is an excellent viewing platform in ...

The metronome in Prague is something strange in ...