I recently bought a quadrocopter DJI Phantom 3Advanced and I was inundated with questions, where I bought, how it flies, why, when there will be videos from it, and so on. Therefore, as promised, I will tell everything in a couple of posts. It is unlikely that there will be more. Today, about the purchase and first impressions, the next time something else is already based on personal experience of flying, since so far there is very little experience.

Where to buy quadrocopter with camera

On Aliexpress, copters are sold at the momentwriting a post at a price of 50-55 thousand, if we are talking about Advanced. For example, this one for $ 800. There is a bit cheaper, but there are no orders and it would be dumb to buy. Accordingly, more eminent sellers sell already somewhere at a price closer to 60 thousand.

I decided not to wait for 2-3 weeks of delivery andBuy quadrocopter immediately. I ordered it not from the official dealer for 70 thousand, but for 60 thousand in the Online Trade store (link 150 rubles as a gift). In principle, it is not a very big difference compared to Ali, but it’s not necessary to wait and you can check everything right away. Especially in the Online Trade, I have been buying for a long time and I have VIP status there (just for it, the price was 60 thousand).

However, a week later, I realized that the copter to mesold already activated (he did not request activation when DJI Go application was first launched), and DJI tech support does not know my copter serial numbers, they are not in the database. Therefore, I gave my copter to the service of the official quadrocopter DJI dealer in Russia Skymec (there are no complaints to the Online Trading, it is only resold). And you know what they said to me from Skymec? That everything is normal and serials in order. Why the producer DJI doesn't know them, they didn't answer me. These are the copters sold officially in Russia. 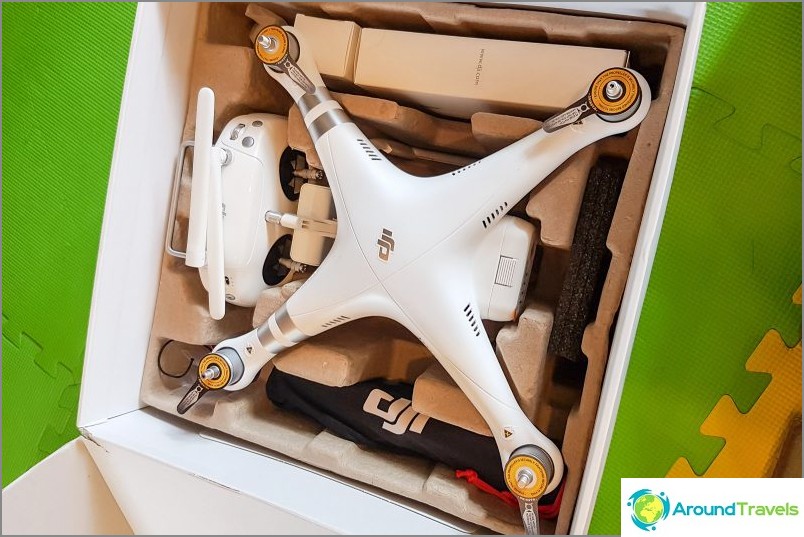 Why do you need quadrocopter

Dip in the forums, I learned that many are buyingQuadcopter yourself as a hobby. Indeed, an interesting and fascinating toy. It can be apregdit, set records for a distance, show friends. Sometimes even the shooting of the video itself is not so important (there are quadcopters without a camera), as much as the pleasure of flying. The second category of people - those who take to the copters to order. They do it as just separate shooting from the air (for example, shooting areas in a cottage settlement for a presentation), and as part of a video (weddings, events, etc.).

Why does he need me? Yes, I do not do video, but I like the format of video blogging, I just still haven’t thought of a suitable topic for myself. Naturally, you can shoot anything, including your trips, but this is not payable. The one who was involved in the video knows how much time and effort it takes, so I have no motivation yet (if there is no worthwhile idea, then there are no prospects). I even wrote about this post (What video to shoot for a blog).

However, I still keep thinking aboutvideo format and a kopter can push on thoughts, all the more you need to keep up with the times, you can’t be left behind in a business like blogging. In addition, I will sometimes need a kopter, sometimes for work, for example, to review a particular beach in Thailand. I do it much faster in time with a copter, and for the reader of the blog it will be more informative than regular photos.

And there is another useful feature duringtraveling around the country - you can see something trivially "around the corner." I have repeatedly come across the fact that I wanted to know where this or that path leads, or what is behind that cape, but there was no time to check.

What to choose from DJI - Standart, Advanced or Professoinal

For me it was initially obvious that you needtake only DJI and the Phantom 3 series, so I didn’t even consider other options. Considering that I do not plan to make a hobby out of flights, I needed something flying and taking off right out of the box and without any complications. After reviewing the versions, I realized that you need to take not Standart. Standarta is initially a smaller range, especially in the city, Wifi is used to transmit video, but not a lightbridge, the old generation console, Glonass is not caught, the camera does not shoot 60 frames, there are no sonars (visual positioning with an ultrasonic sensor).

Now compare 2 older versions. On the forums, people believe that in Professional pseudo 4k and if you cropped it to FullHD, it will turn out worse than the original FullHD. The cameras and matrixes of Pro / Adv are the same, it just seems that Adv reduced the resolution programmatically. If we compare 4k for Professional and FullHD in Advanced, then the bitrate is 1.5 times as large, and not 4, as the idea should be. True, someone writes that after all, if you do with 4k not just cropping up to FullHD, but with a normal codec, it’s a good picture, better than FullHD. But in any case, it is personally more important for me to shoot FullHD at 60 frames per second than 4k. Unfortunately, the camera in Pro does not write 4k with 60 fps, so I don’t see any sense in it, especially since it’s likely that it’s a pseudo 4k.

There is one more plus for Pro - faster charging100 W, instead of charging 57 W for Adv. But IMHO it is easier to buy such a charge on Ali or even to score and just wait half an hour more until the battery is charged. Thus, I did not see the advantages of Pro for myself, but it costs 10-20 thousand more, it’s better to buy another battery or something else for the money.

Which of the additional buy to the copter

I will list various trifles and not quite trifles, which in my opinion are necessary. Part I have already bought, part still goes to me with Aliexpress. Order from more needed to less necessary.

Specify specifically dollars, as the course changes. And also, if you do not know, then it is desirable to pay for purchases on Ali in dollars. Wrote more in the post - how to save on Ali up to 11%. 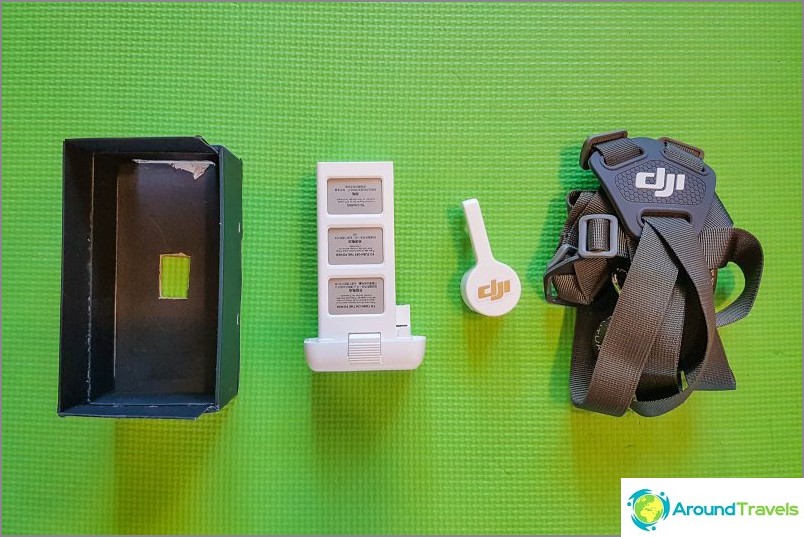 Out of habit, instead of going toI sat and tested the fields in order to understand the topic as quickly as possible: how to control, what functions are in the application, how to calibrate the suspension (many people have a horizon at the camera), what is the flight range and maximum altitude, what you need to buy additionally. Probably, most people first read a few months in quiet mode, then make a decision and buy. I have the opposite

Therefore, even forgotten the work to learn the full amount of information.

First impressions? He is flying! In reality, technology has gone so far ahead. I would not be surprised that in another 10 years there will be something that is difficult to imagine now. If in my childhood I was extremely happy with a typewriter on a wired (not even radio) control, now the copter is almost a common thing.

I had few flights, just a couple of pieces,just in the field to more or less get comfortable. In fact, if you do not make sudden movements, do not wait until the battery is less than 10%, then it is quite difficult to kill him. He does everything himself: he can fly up or sit down; if you release the control levers (sticks), it will just freeze in the air; if the connection is lost, he himself returns to the starting point. Also appeared in the latest versions are very convenient features Follow me and Point of Interest. I tried to circle around the tree on my own, but it turns out to be very twitchy, another thing is to turn on the Point of Interest.

Specially watched various videos shot withquadrocopter and in all no one describes any complex shapes. It hovered in the air, fixed the camera and the copter in the right position, and you make the passage for a few seconds, which then will go to the video. To shoot in this format, the skill is almost not needed, despite the fact that such inserts in the video look very good and practically “make” the video. 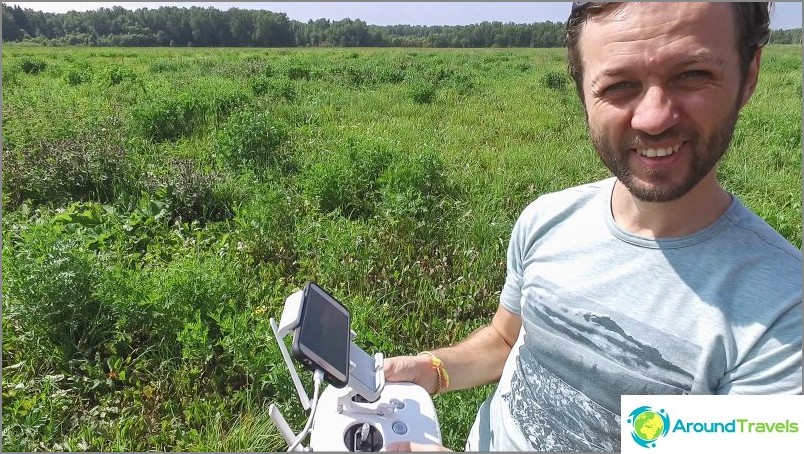 Satisfied after the first flight on the quadcopter 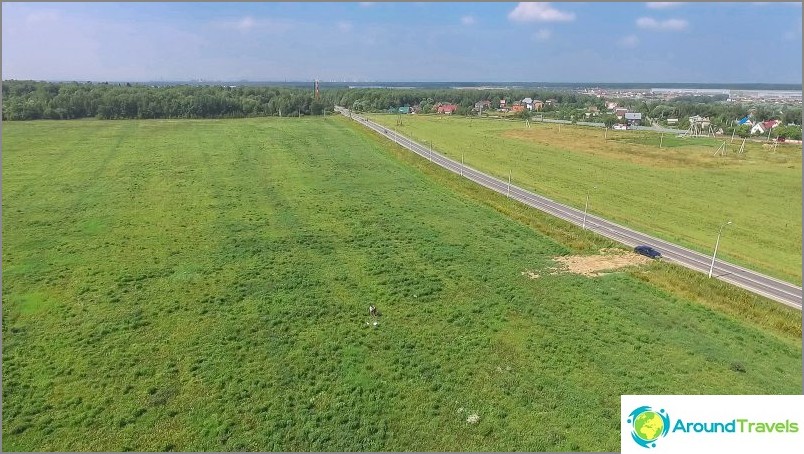 Any photos and videos from the air look more interesting.

Honestly, at first fly pretty dumb. Do not want to climb too high or fly away. Although what could I do, even if the copter would be closer ?!

Also noticed that in the line of sight in the field inThe suburbs fly a maximum of 600-700 meters, then the connection breaks and an automatic return home (RTH) takes place. They say that this is not enough for Advanced. Either the problem of my particular instance, or the place I chose was not a good one (everything depends on interference, or DJI gradually reduces the power of the transmitters in the new versions (I have the GL300C remote control, which is considered the lowest power).

You can increase the range by reflectors,Replacing antennas for more powerful ones by unlocking channels. By default, the channel range is chosen 13-20. Since these channels are quite clogged, it makes sense to get the opportunity to use channels up to 32, especially if we are talking about the city or cottage villages, where there is a lot of Wifi routers. Most likely, this is not entirely legal, but nevertheless they do it. I have not checked it myself, but it is done easily.

The video is transmitted to the phone in HD quality (1280?720), and saved immediately on the phone. But this video has a rather small bitrate (2 Mbps) and it is suitable only for preview. I know they write that this can be configured, but in the latest version of the DJI GO application, this setting is not. On the copter itself, the video is written on the USB flash drive as it should. For example, 2.7k is written with a bit rate of 45 Mbps. Although the quality of the Phantom 3 cameras is approximately the same as action cameras Xiaomi. 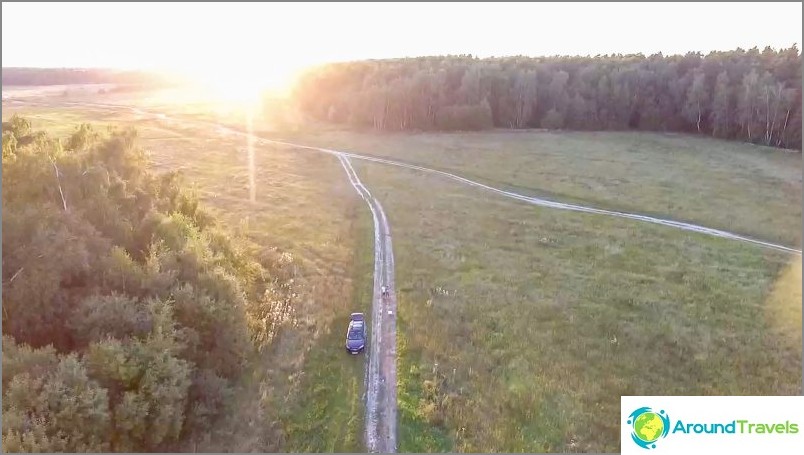 The sticks rather sharply control the copter, but theircan be configured in Settings / Advanced Settings / EXP. The default value is 0.4. For example, it is possible to put 0.2 for turns (Rudder right / Rudder left) and 0.3 for up / down (Throttle up / Throttle down). Or you can even put 0.2 for all settings. Just do not need to move the graphics, you just need to enter the numbers manually (put not a comma, but a period).

P.S. I will supplement the post, as new accessories will come or a new infa will appear. If you are interested in all this at all, write in the comments, then I will know that in general it makes sense to continue this topic.

What currency to take to Thailand and abroad ...