Samui has only two temples, made inone color. The White Temple on Chaweng and the Red Temple in Hua Thanon. Hua Thanon is the next village after Lamai, if you go from Chaweng to the south of the island. The Red Temple, of course, has the original Thai name, Wat Ratchathammaram. Wat Rachatammaram, whatever that means, is a very beautiful and photogenic temple on the outskirts, where you definitely need to drop in for at least three reasons, and at most for five reasons.

The Red Temple on Samui and the Strength Ngu Pagoda

The first reason I will call the temple itself Rachatammaram. It has been in a state of protracted construction for a long time, since all the works are done according to the degree of accumulation of donations, and the temple stands in such a place that tourists come mostly not in batch, but in solitary and stingy. The temple is beautiful, picturesque and unusual. It is also sometimes called not Red, but Terracotta.

Sometimes they ask, and what is it made of, is it clayor not, and because of what such a color. Of course, I could be mistaken, but, it seems to me, everything is quite simple - it is concrete, which is painted with red paint. At least the tile around the temple is precisely painted, it can be seen with the naked eye. In principle, why invent something. Especially if you imagine how much the construction of this temple would cost if it were made of something else. It is built out of concrete over the years and never finished. I saw this temple 4 years ago and it was also built. Although in general he, what then, what now, looks almost complete.

But in any case, the Red Temple looks wonderful and generally quite unusual. Not typical for ordinary Thai temples and I personally like these temples and like. 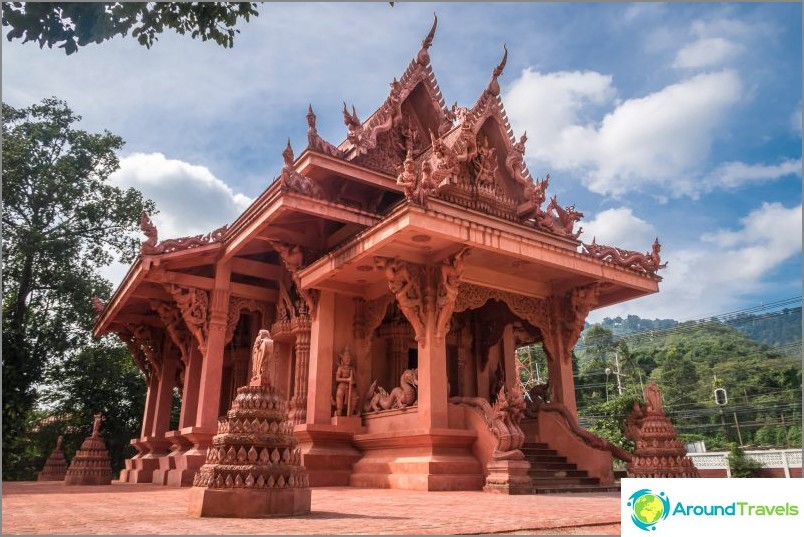 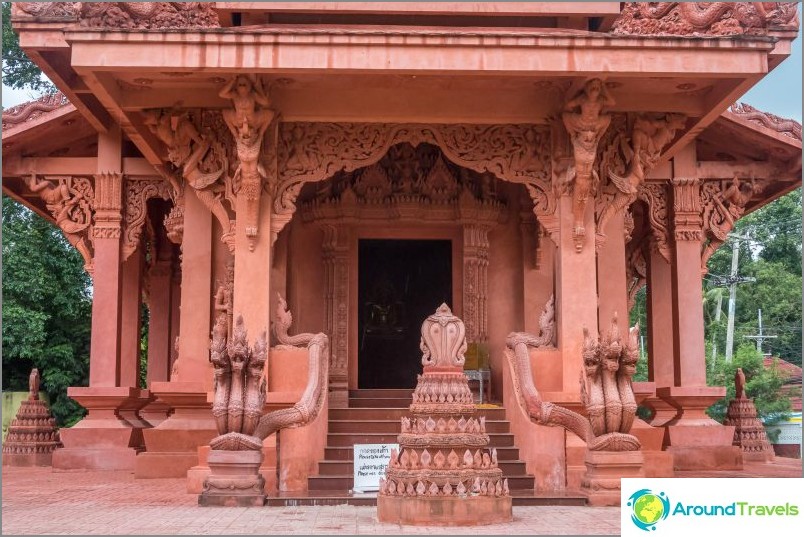 Temples of Samui throw up such surprises - absolutely Red Temple 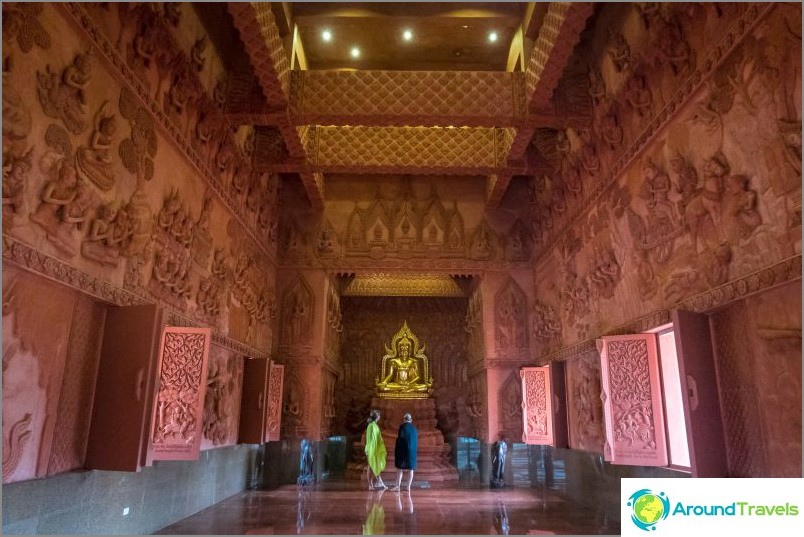 Inside looks no less interesting 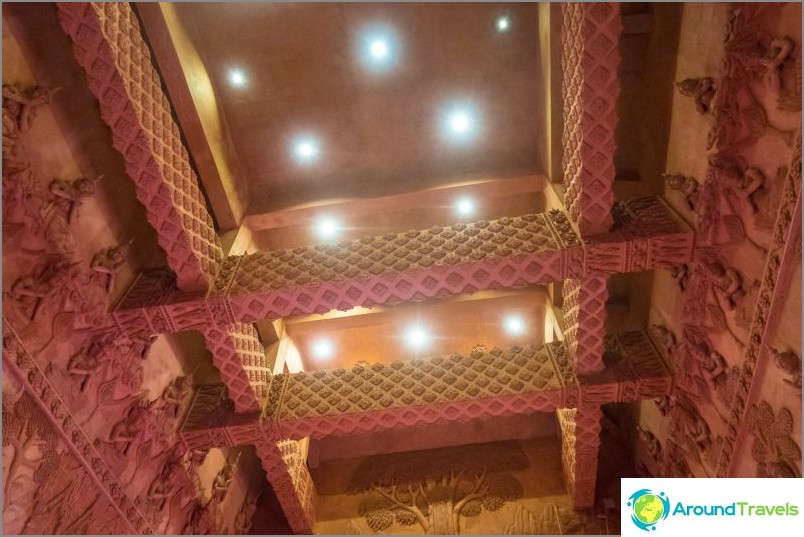 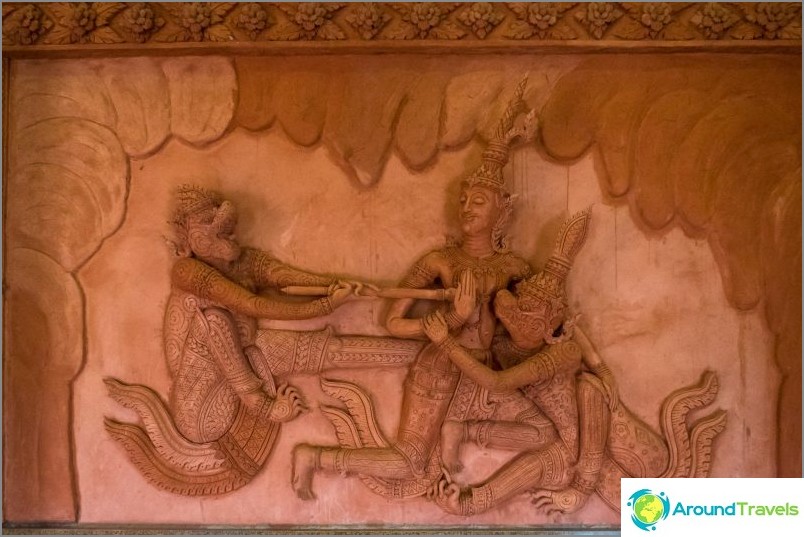 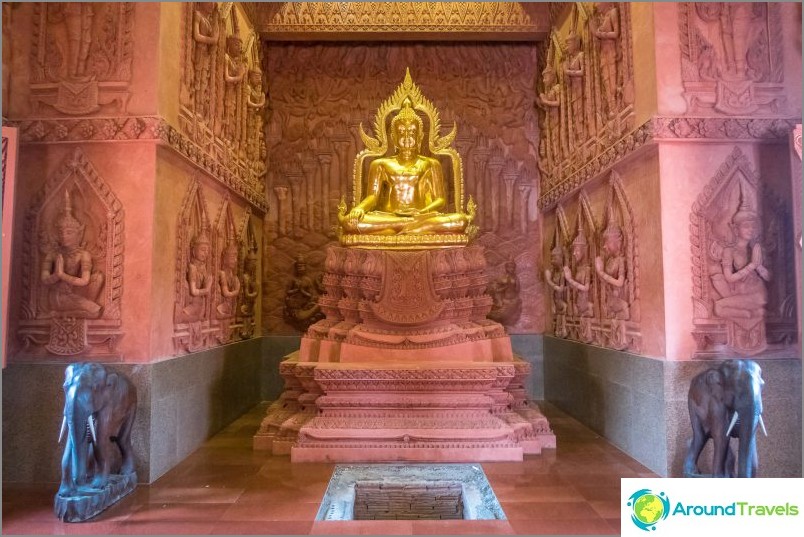 It seems that the image is a little double, but it is not 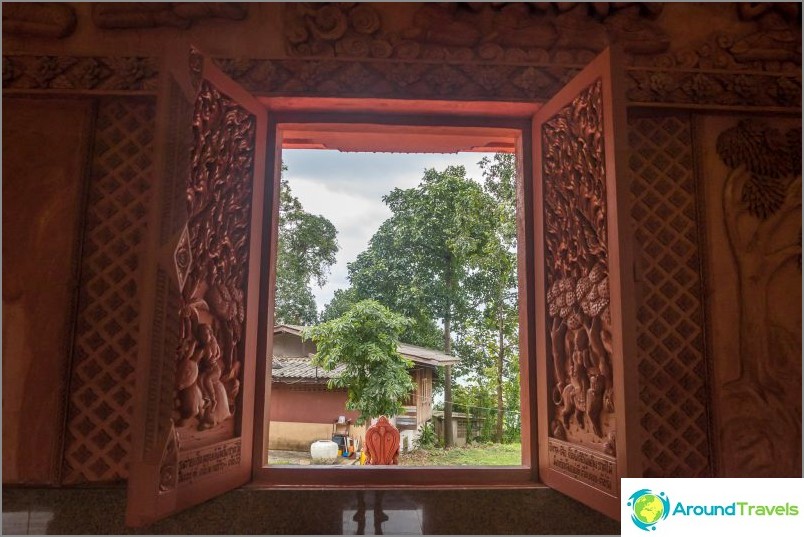 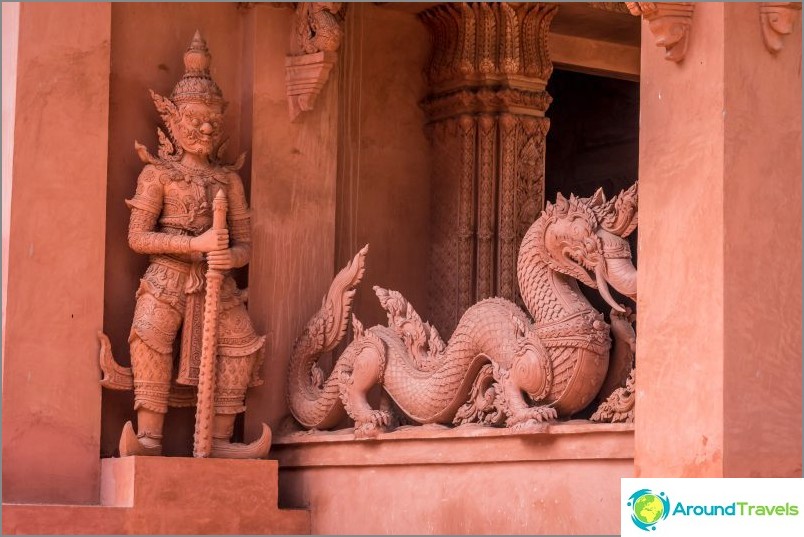 Even if it is painted concrete, it is still beautiful 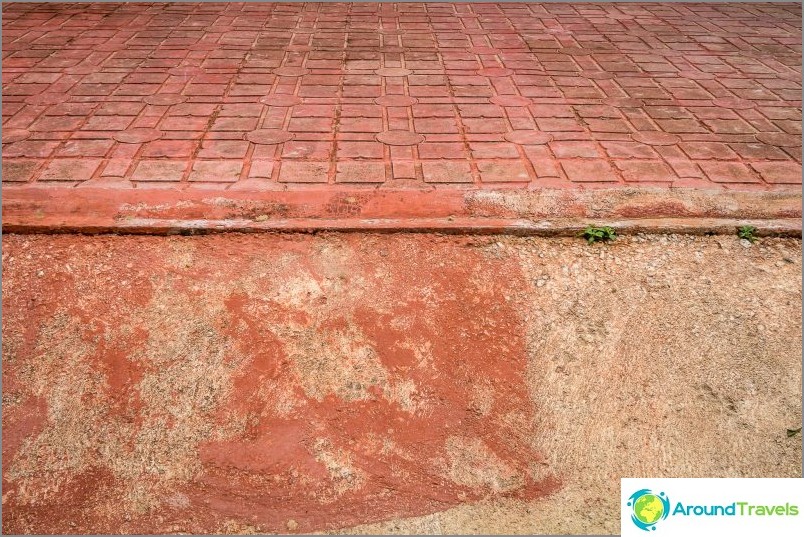 Tiles around the temple

The second reason is the Serpent Stone Pagoda, whichis one of the three oldest pagodas on the island. Her age is about 250 years old, she keeps the relics of the Buddha, brought from Sri Lanka in 1955 already. The place is so holy that members of the royal family honored it with their presence in 1962, and for the island, where the tourism boom happened only in the 80s, this event was very out of the ordinary. 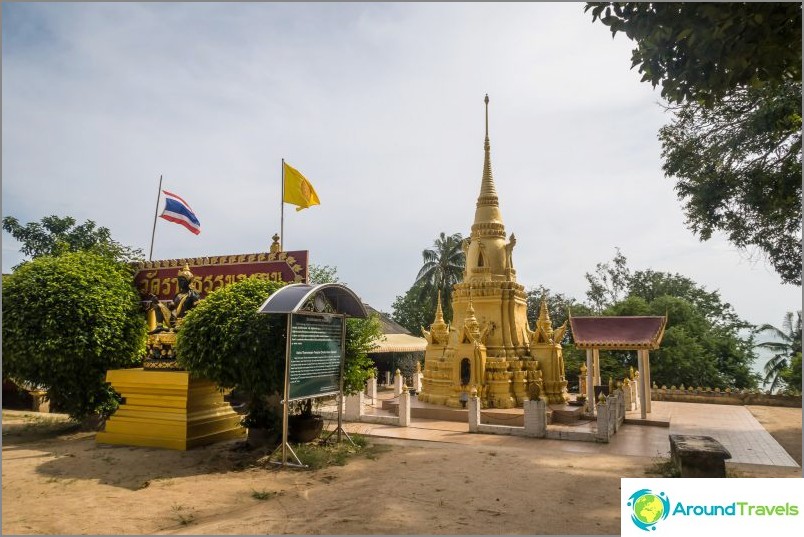 Serpent Stone Pagoda, it is the Pagoda of the Power Ngu 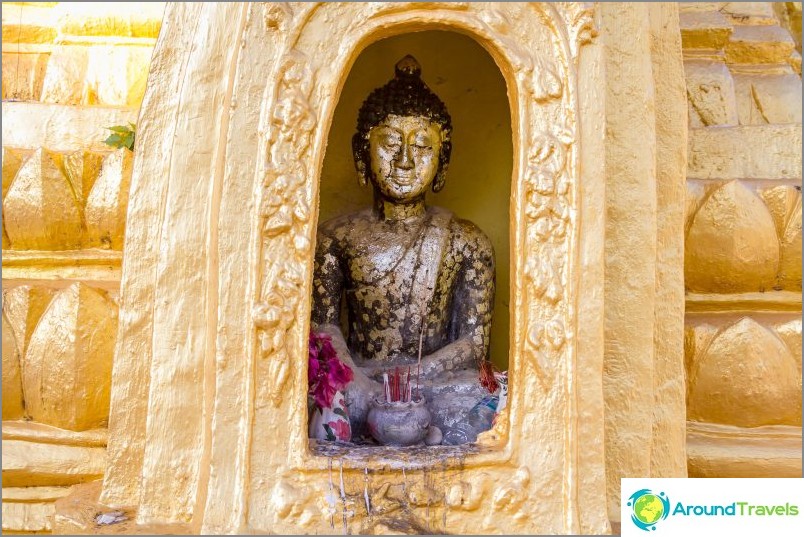 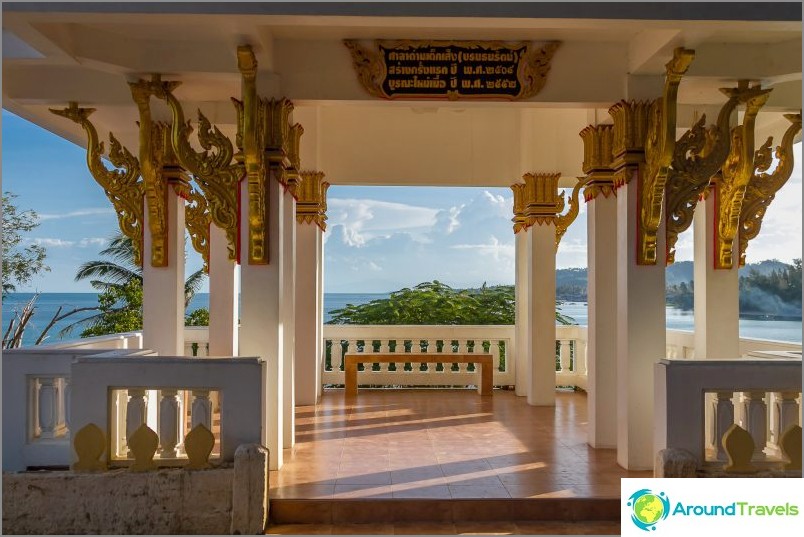 Near the pagoda gazebo overlooking the sea

The fourth reason is a gazebo overlooking Hua Thanon. Quiet, secluded place, although the view is slightly spoiled by too lush trees. Under the pergola on the right, on the seashore, a fifth reason hangs on a tree - a rope swing above the water. Great place for pictures a la bounty. And by the way, no, I have not forgotten about the third reason, but it is necessary to make a separate chapter about it. See after the photos below. 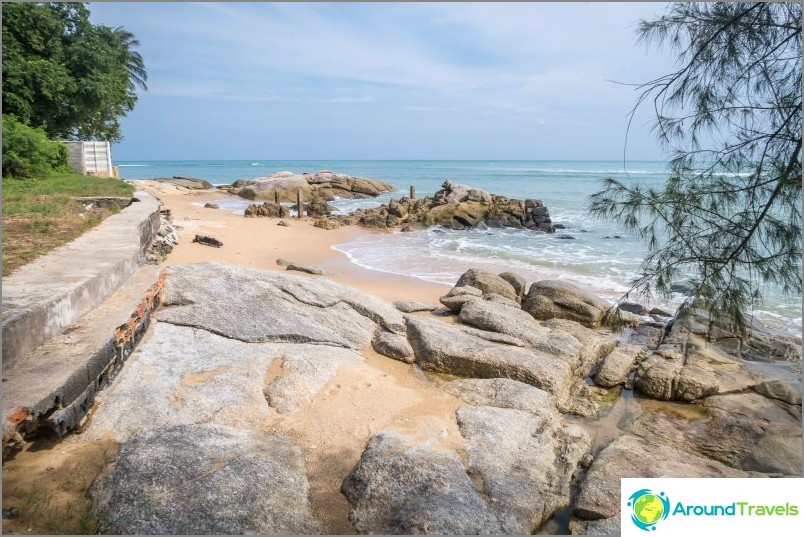 If you go down to the sea, then there is a small, cozy beach. 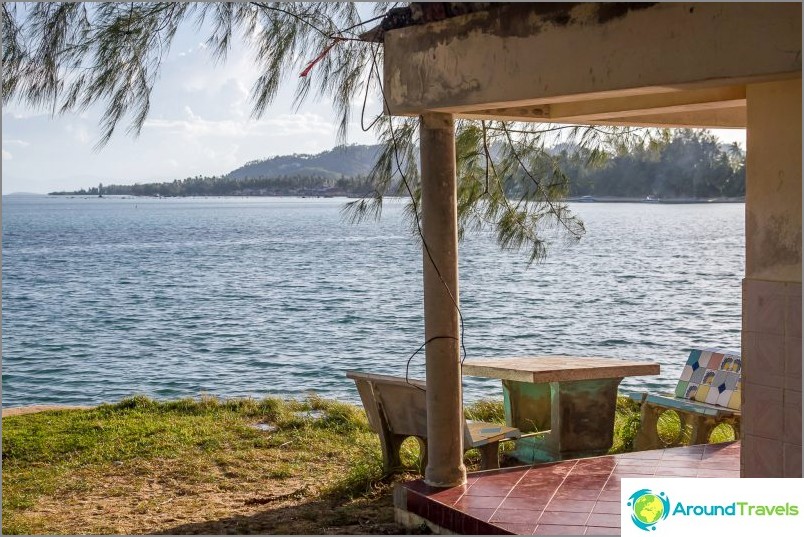 And the same gazebo right on the beach

The first tourist on the island

Darrell Ji Berrigan. The dark horse, about which little is known on the Internet, except that during the Second World War he served in US intelligence, and after the war ended he moved to Bangkok as a journalist. Being closely acquainted with a businessman from Koh Samui, he was impressed with his stories about a beautiful island in the south of the kingdom, and one fine day went there by sea. It was 1952, Berrigan then turned 38 full years.

In the words of Berrigan, it was an incredible experience.travel, at the end of which he got to the pier in Nathon, where he was surrounded by surprised Thais who had never seen farang so closely before. This was followed by a long road in the back of a truck full of coconuts. They traveled from Nathon to Hua Thanon for several hours, because at that time there were no electricity and concrete roads on Samui — only gauge primers and three large villages: Nathon, Menam and Hua Tanon.

The former scout was fascinated by the island and it was withtourists from other countries who read the newspaper Bangkok World, where he was the editor-in-chief, began paying attention to Samui. The newspaper, by the way, long and successfully competed with the Bangkok Post for the title of the first English-language publications in Thailand. In his testament, Berrigan asked friends to cremate him after death and bury him in a cemetery near the old Pagoda Sila Ngu. Unfortunately, friends had to fulfill this request after 13 years - Berrigan was killed under unclear circumstances, and the range of causes ranged from dark affairs with intelligence to banal bytovuhi on the basis of jealousy. 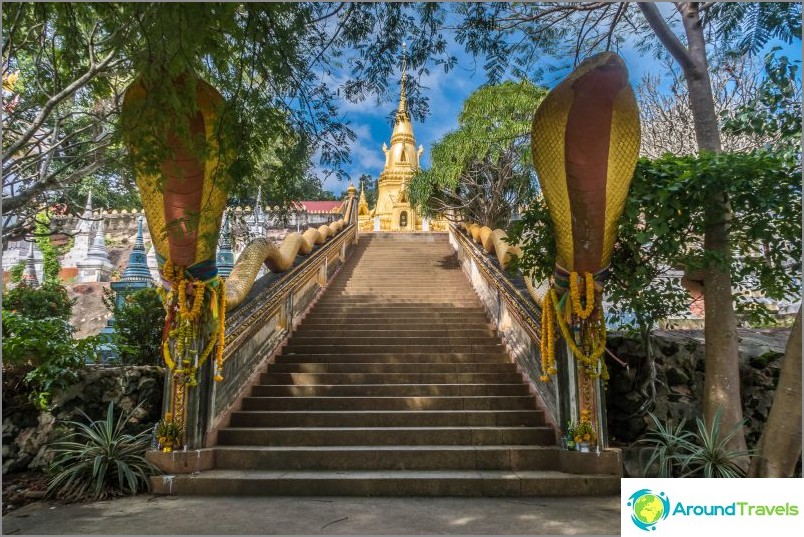 Stairs from the pagoda to the sea, right and left - the cemetery 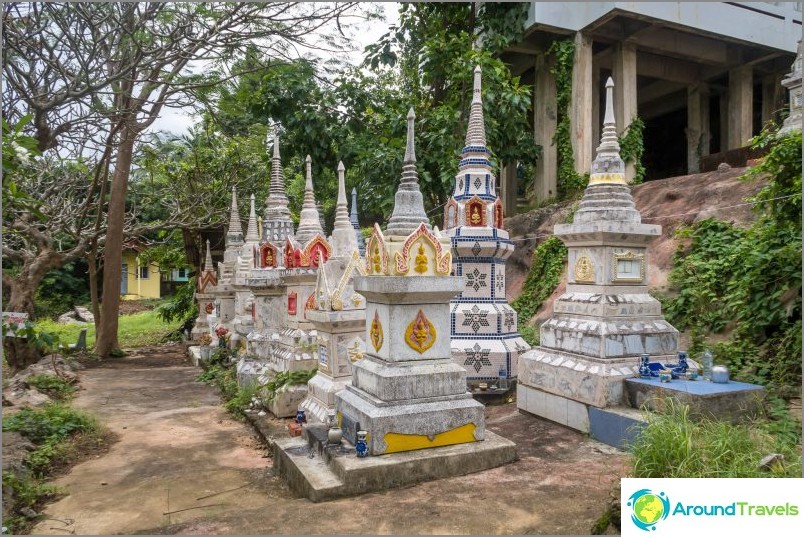 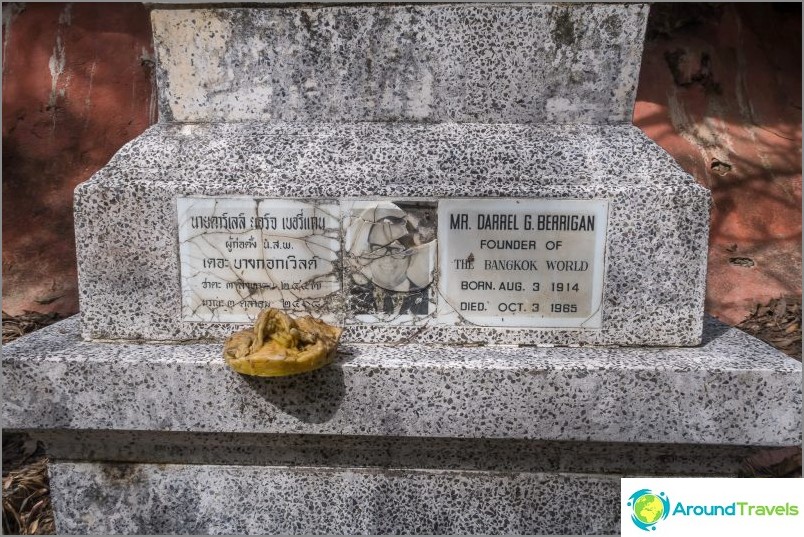 The grave of the first tourist on Samui

The place is free, donations are for yourdiscretion, when visiting be sure to comply with the dress code. Monks live on the temple grounds, and their thoughts can distract half-naked female legs and shoulders. But as in any holy place, one should not expect aggressive behavior from holy people, but especially ardent parishioners will consider it their duty to make a disgruntled person, scold you, or even begin to show off. Men, in theory, this dress code also applies - in shorts it is better not to come.

The tomb of Berrigan - the stairs down to the sea, withleft side, third row above. On the swing you can walk on the shore, to the right of the stairs. If there are a lot of cars in the parking lot of the temple, people play music in the room to the left of the entrance - do not run there with cameras, there is a funeral.

Red Temple (Wat Ratchathammaram)
Unfinished red limestone. A very peculiar structure, in the yard there is a large banyan tree, and closer to the sea is one of the three oldest Samui pagodas and a small cemetery.
Read more about the temple. 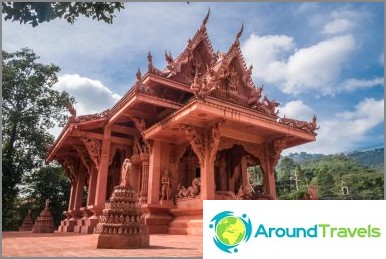 Unfinished red limestone. A very peculiar structure, in the courtyard there is a large banyan tree, and closer to the sea is one of the three oldest Samui pagodas and a small cemetery. More about the temple.

Viewpoint Lad Co is the only real lookout ...