On the Internet, many application, reporting andentertainment texts on the topic "what a tourist should know before going to the sea", but it is this article that makes sense to read with the utmost attention and seriousness. If you are going to the sea, no matter what it is and where - you should know this information. 95% of the people who drowned in the world died just because they did not know about the RIP-currents or rip currents. Do you know how the abbreviation RIP stands for? “Rest in peace” in English means “rest in peace”.

What is reverse currents

This is a stream of water perpendicular to the shore. If you do not go into the scientific description of the occurrence of oncoming currents, then on the fingers the explanation looks like. Waves, surf, which rages constantly along the edge of the coast, under water pours out the even ridge of sand. Knoll, ridge, wall, spit - call it what you want. This ridge is not visible from the coast, it stretches under water along the entire line of the beach, or only partially, is present there constantly or only it is washed at certain times of the year (and sometimes at different times of the day) - but it is there. You probably yourself remember that there is such a bottom, which becomes deeper literally from the second step, and after another couple of steps it suddenly becomes shallower, and you begin to climb a small slope under water. It's him.

A rip flow occurs when in its weakestthe place of the sandy ridge does not withstand the pressure of the rolling water and blurs it. Do you understand, yes? A hole appears in the underwater wall, and all the water to the right and left of the hole, retained by this wall, rushes into it, creating an instant, incredibly strong and very narrow stream of water that knocks down like a mountain river and takes a person from the coast to the open sea. Well, in the case of an underwater scythe, which does not stretch along the entire coast - on the very edge of the spit, an underwater jet arises with each outgoing wave due to the difference in the volume of water outflow. Where nothing interferes with the water - the sea just moves back. The scythe, preventing the outflow of the lower layers of water, causes them to accelerate. 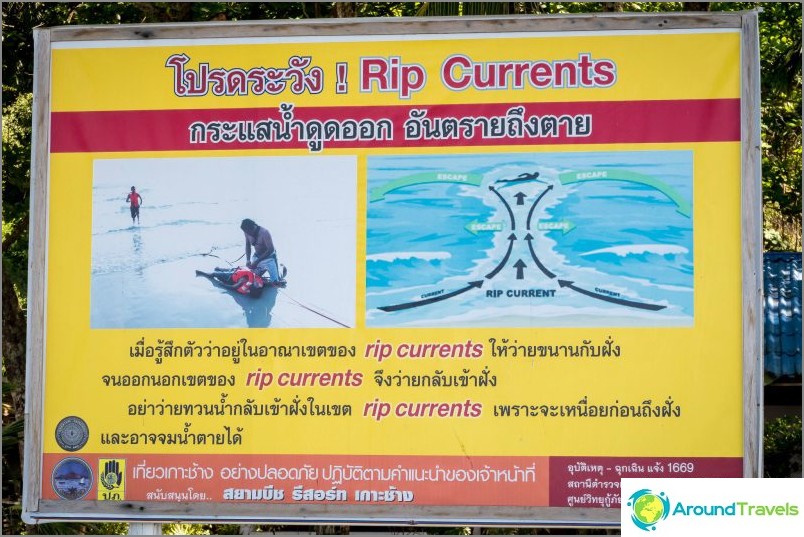 What are the rip flow

According to some reports, the width of the rip canvary from 2-3 to 50 meters, and the flow rate can reach from 4 to 16 km / h. And if at the lowest rates you get off with a slight fright, then, hitting a large rip that can drag you to the sea for half a kilometer, it is very important not to panic and remember everything that you are reading now.

Rip flow, it is a counter flow, it isbreaker current, wave, breaker wave - found on most oceanic beaches of the world. Where the rescue service and the beach are more or less supervised by the state or the adjacent hotel, in areas where rip currents are present, there are always identification marks and information boards with a short instruction “what to do if ...”.

And there are spontaneous rip flows that ariseeach time in a new place and with different characteristics. Exactly they are the most terrible, dangerous with their unpredictability. There is a mother with a child in the water to the waist, for four hours she is already playing in one place and everything is fine. Then the noise, the foam, the mother with the child does not even have time to shout, as it turns out a hundred meters from the shore. It's very scary.

What is the danger of such trends?

This is an incredible, paralyzing horror when notyou understand what is happening and you see that the coast is getting farther away, and no one on the shore also understands how to help and what needs to be done. What is sad is that even a husband or a passer-by jumping after him who does not know about the rip-current and how to deal with it has every chance of dying. Did I get you to scare? Do you understand how serious it is? So here.

People are killed not by the sea, not by the rip-current, or evenpoor swimming skills - and panic. Panic prevents assess the situation, make a decision, panic prevents everything and pushes the majority of morally unprepared people to the most obvious, but the most disastrous act - to row back to shore. Even the Olympic champion is unable to row against the current at a speed of 15 km / h. I am not at night now - swimming masters, strong, trained athletes drowned in rips. After all, you need to row not just fast, but faster flow to get to the shore. Panic causes people to wave their hands to exhaustion, which leads to their death.

How to escape in rip-flow

A rip is just a stream in a few steps.wide, and to get out of it you just have to row not to the shore, but to the side. You are in the river, which means that now it is the calm sea that is the shore and salvation for you, swim to it. Do not resist the flow, swim, gradually raking to the side, for you the primary task is to leave the stream. And if you find so much courage in yourself - then you just lie on your back and wait - in a minute or two the flow will let you go. After this, swim away to the side and begin to return to the shore.

It is very important to save strength and breath, notallow panic to paralyze the will. The rip-current is not a whirlpool, it does not pull to the bottom. As long as you swim out - on the coast, you’ll figure out how to help you and let the Buddha, if you were in your mind and swam on the beach with lifeguards, and not somewhere in the wilderness. And I keep silent about the case if you still do not know how to swim. Although no, for you I will have one piece of advice - buy a PES board for swimming, tie it to your wrist and go into the sea only where there are no prohibiting flags and where a person with a life buoy is on duty on the tower.

How to understand where there are rips

The main sign of rip danger is red flags anda lifeguard running along the beach who waves his arms and curses at you in all the languages ​​of the world. But still rip currents have other external signs that will help you notice the danger even without flags in the sand:

How to handle photos in Lightroom and how ...