Review of Liberty Insurance - an insurance case in Europe

Another review of the work of Liberty Insurance andClass Assistance. The scene of action is Warsaw, Poland. The situation is this: the temperature of Egor, snot, cough and suspected otitis. This time we became smarter and bought an otoscope, so we can, as far as the skill allows, monitor the condition of the ears. A useful thing for deaf children prone to otitis. But nevertheless, it is necessary to consult a doctor, it’s all the more vain if you bought insurance. Last time addressed in thailand on samui and Liberty was also, then everything went fine and otite was exactly the same.

Unfortunately, since 2016, Liberty has deteriorated badly. Sure to look my main insurance post, compiled after analyzing a huge amount of feedback and personal experience (plus a little bit of insiders). I try to update it promptly so that workers can always choose insurance.

I remind you that it is very convenient to compare insuranceand choose through the service Cherehapa, because there it is immediately possible to compare 16 insurance, both in price and conditions. In addition, they provide support, both before the purchase of the policy, and in case of insurance claims. Well versed in all the subtleties, you can ask any questions in the online chat.

But of course you can buy the same Liberty and directly on the official website, as they say, the choice is yours.

I called in the Class-Assistance in the morning, I have themthey asked for all the data of the policy, and said they would call within an hour, say where to go. It is a bit strange that we clarified several times whether we had not addressed where, and if we had applied to this policy before, as if they did not have this in the database. After 20 minutes they called back and said that the doctor would come home, no need to go anywhere. Be sure to read my mega useful post about asistensy and other nuances of the choice of insurance.

Generally amazing, the first time I ran intoso that the insurance doctor came to the house. No, I heard, of course, that sometimes it happens, but people directly ask themselves to come to their house (when, for example, quite a serious condition), and we themselves were offered. I do not know whether it is always in Warsaw or not, maybe it’s so accepted here, but it’s convenient, especially with a child.

Somewhere in an hour they called back from Poland.(apparently from the local clinic), clarified the address. Conveniently, what was said in English, I immediately imagined how many English speakers speak at the registries in Moscow, and what a foreigner would be interested in doing in Russia if he applies for insurance. Half an hour later the doctor came. That is, the total waiting time of about 2-3 hours is normal in principle.

The doctor conducted a fairly routine examination, confirmedOur concerns about otitis, wrote a list of medications and a prescription for an antibiotic. In Poland, antibiotics are not sold without a prescription. We spoke in a mixture of Polish and Russian, in principle everything was less clear. The doctor left his phone and said to call, if something is not clear. Not paid anything, the reception was covered by insurance.

It is interesting, of course, that there are prices for receptionsDoctors in Warsaw. I only know that a friend of one mother had a child who got sick about the same time and they went to the clinic for insurance. They had another insurance, so they were not offered to come home. So, she said that the price list for an appointment with a pediatrician was about 120 zlotys, that is, somewhere around $ 32. Thus, the policy of Egor for this trip has already got out. 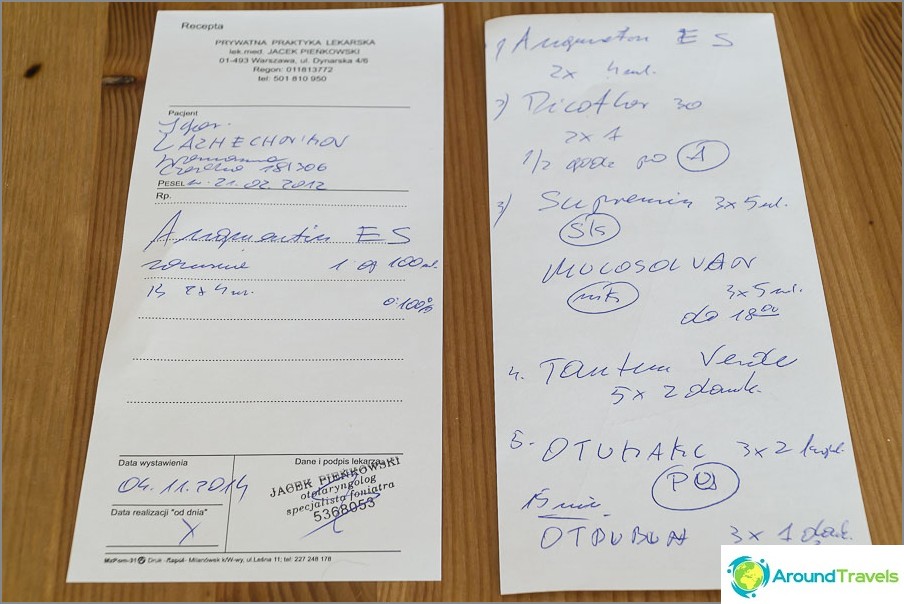 We bought medicines at our own expense in a pharmacy. In theory, we should have been compensated for their cost upon arrival in Russia. I asked a question to the Liberty support service, they replied that if there are checks, and the drugs are written on a stamped or signed form, they will compensate. And you must apply within 30 days after returning. Our form is not exactly a blank and the seal is not exactly a seal, but I gave the prescription at the pharmacy, but in this case Liberty promised to compensate. It would be necessary to check, but the amount is quite small, so I didn’t want to fool with sending a registered letter with checks, application form and copies of documents.

And in Thailand in this respect it was very comfortable,You leave the hospital with a bag of medicines, you don’t need to go to the pharmacy, and everything is included in the cost of the examination and is covered by insurance. On the other hand, there doctors do not come to the house or come, but in very rare cases. 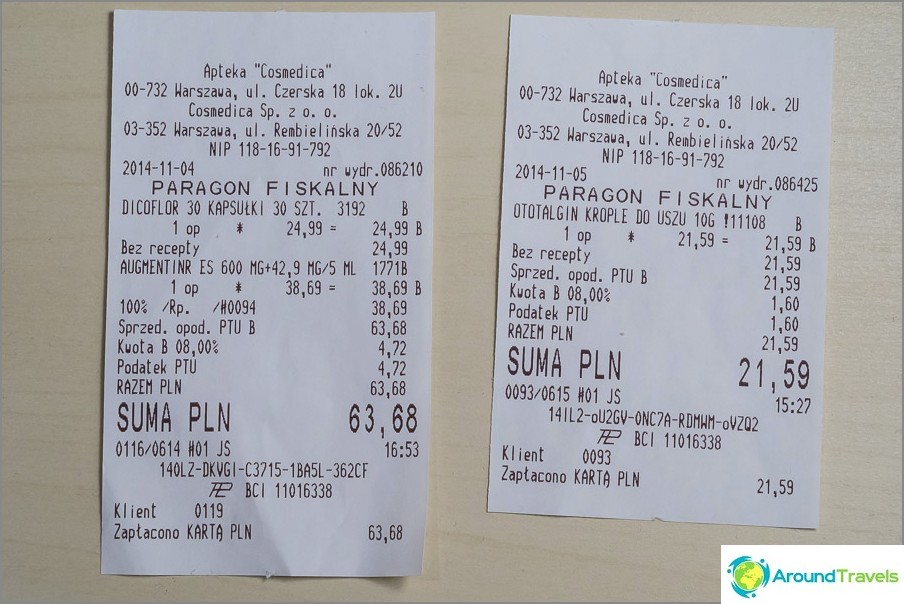 Two checks for 85 PLN, did not compensate

Update the post. A month later, I had to turn again, because Yegor fell ill again. This time the doctor came in an hour, because they asked for a quick, very sick because. So the doctor was different, a young guy equipped with one (box with tools, uniform), who spoke excellent English. Similarly, the inspection, and a list of drugs with a prescription.

Based on the second case, I can conclude that pretty quickly everything happens. Still, two times already an indicator of at least some. I hope that this will be the case with Liberty and Class-Assistant.

P.S. Of course, I understand that the insurance company should be checked for more serious cases, but you know, I really do not want this, so I wrote in a review what my personal experience really happened. Something serious will not wish anyone.

Insurance against not going abroad - what ...

How to feed a baby in Thailand - mashed potatoes ...