For the first time in my life I was riding an elephant. I drove a few hundred meters on it, and then I smelled with it in the river. This was probably one of the most memorable impressions of the whole trip to Pai.

Walking once through the streets of Chiang Mai, II saw a poster inviting you to an exciting one-day or two-day trip on elephants, with these immense swims in the river. The photos on the poster were quite attractive, people and elephants, it seemed to me, were so cheerful and cheerful that I also wanted to experience this experience - fun with elephants. Only now was this very joy worth somehow completely unhappy.

The cheapest offer I saw inChiang Mai for 1 day is 2500 baht per person (provided that two people ride an elephant) or 3500 / person (if the elephant is only at your disposal). And although the program includes a lot more, but that kind of money is still not worth it. Therefore, I already refused this idea. Expensive, and he stinks, probably ...

And here I am in Pai, and in the first tourist cornerI see practically the same pleasure at completely different prices! And even if there were no spare bathing clothes offered, as in Chiang Mai, and the pleasure itself did not last all day, but only an hour or two, I decided to try.

But book a trip immediately in this mini-travel agencyI did not, decided to ride more, look. So, having rented a bike, I drove to the suburb of Paya (south), and after a while various elephant camps began to come across the road.

I chose the cheapest katalnyu, good, the differencestill did not understand. It was surprising that here there are two such services opposite each other, in one hour it costs 600 baht / person (if there are two on an elephant), and in the other - 300 baht / person (under the same conditions). Moreover, in the first place it was necessary to find a mate, and in the second one they were ready to take me alone, just more expensive.

Arriving there the next morning, I found myself standingnearby elephant on a leash. She was bored with chewing on dry leaves and rattling the chain. And it seems nothing special, but she looked a little too tired. And unwittingly the question arose of itself, did she really want to go to this river, and did she really need all that?

A little starting to suffer remorse, Iset out on this warm, large, and, by the way, completely non-smelly animal, and set off. First impressions - the elephants have such thick, rough skin, and the head is so hairy and prickly! And it's so easy to fall off of him if you get too carried away with taking photos.

Front sitting colorful driver with a largea hook on a stick, he poked his feet and a hook into the ears of an elephant and constantly made some strange sounds. In principle, even cats here are not called “kitty, kitty”, but “meow-meow” or a socle.

The elephant walked slowly, sometimes even stopping. Most of the way we moved on the asphalt, which is not so interesting, even despite the fact that the driver later gave me a place on the neck of our large transport. 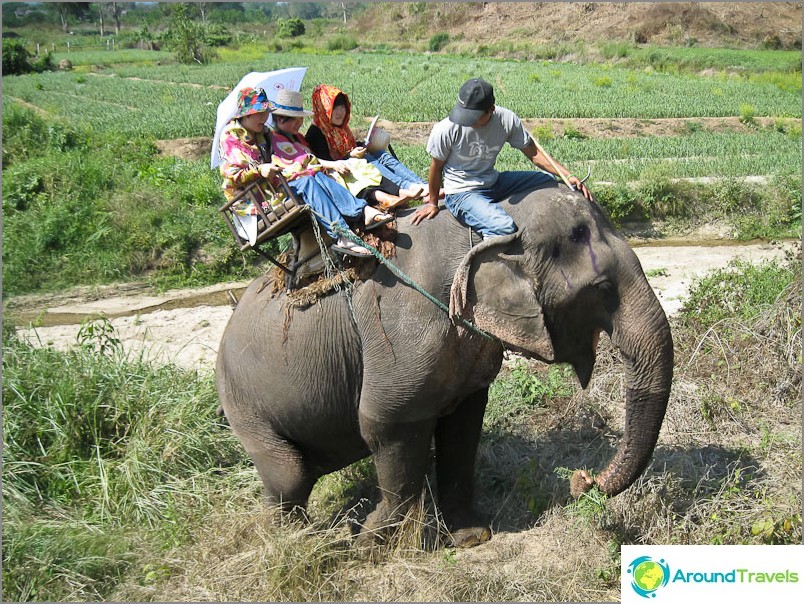 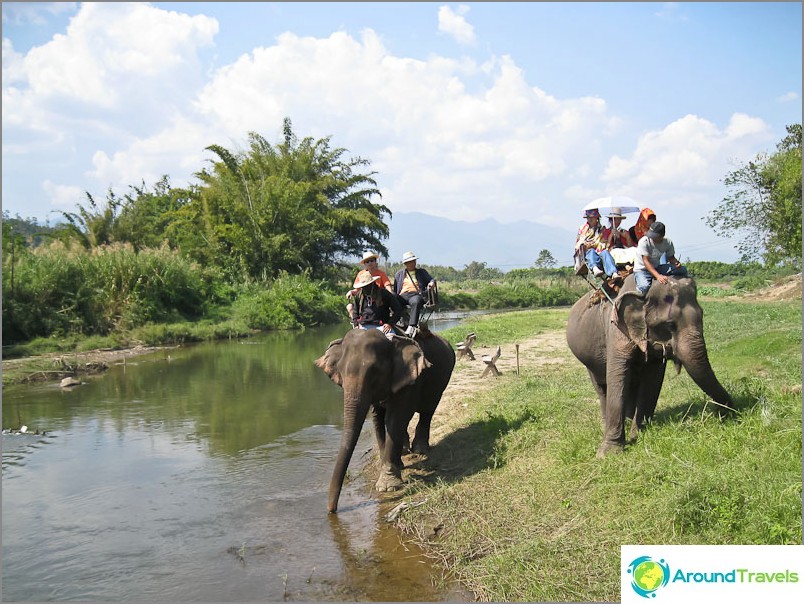 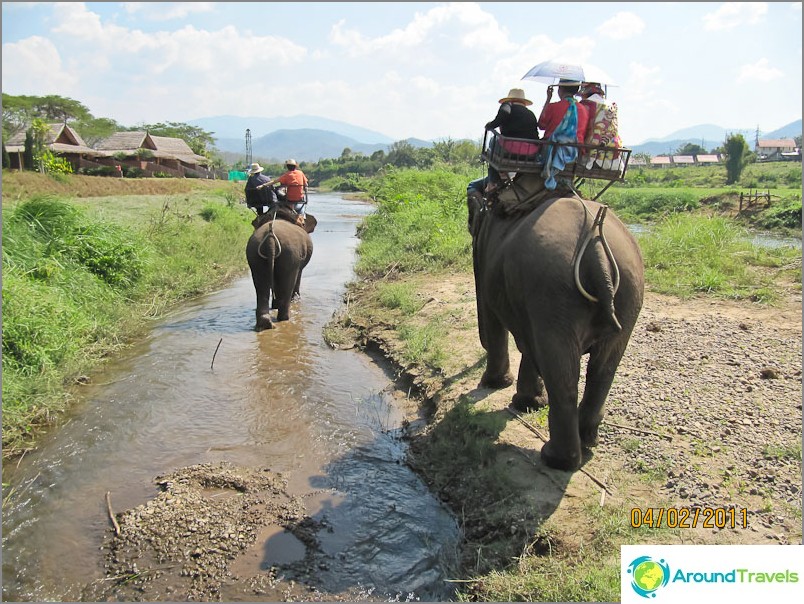 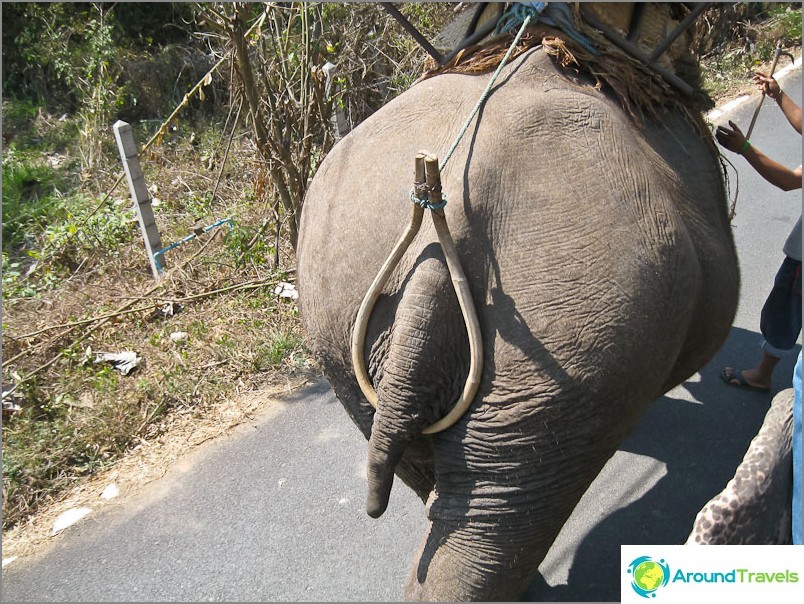 So saddle-seat for some reason is mounted behind 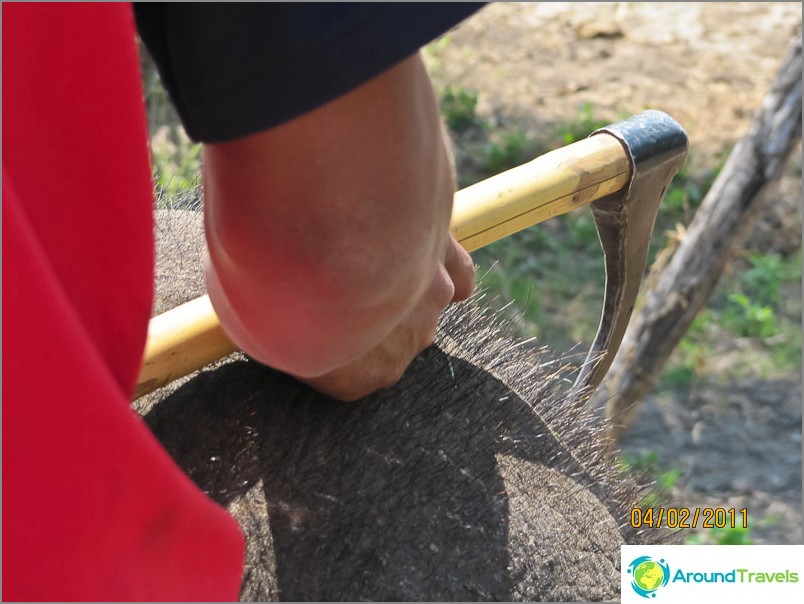 When approaching the river in the head began to climbthe thought that elephants are not such innocuous animals, and if he doesn’t like something very seriously, he will not stand on ceremony. And feeling that the elephant did not have a particularly strong desire to go somewhere and splash in the water, and the driver’s shouts and proddings increased and became more frequent, I wondered if I needed it.

Probably, if I relaxed and naively believedI also like swimming, watering me from the top of my trunk with water, diving or throwing me into the river would be more fun for me. But I saw that all these actions are performed after the insistent commands of the driver, poking into his animal with a hook.

And after 10 minutes of such tumbling, I saidto the driver that I liked everything, but already enough. My enthusiasm for swimming subsided completely when I saw the second elephant, who came after us, peeed safely into the water before bathing and put a decent handful there. 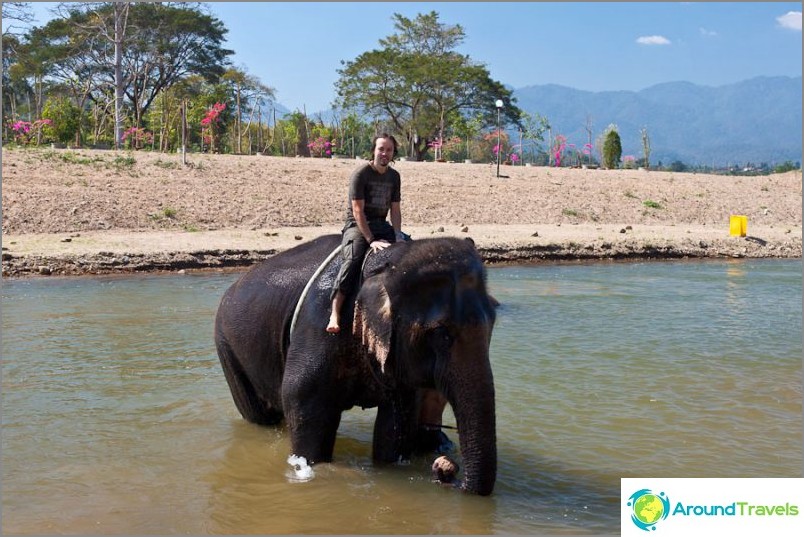 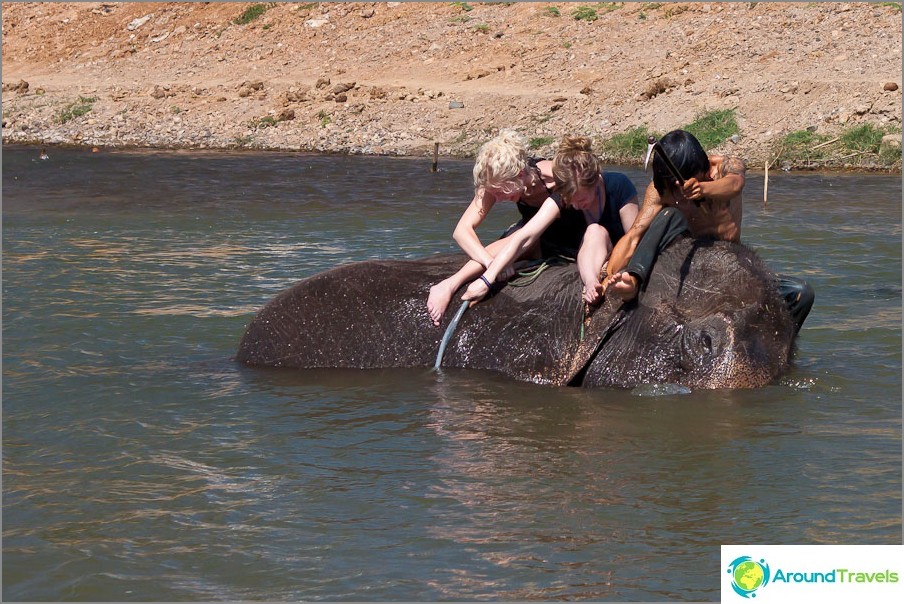 But these neighbors soon became completely wet too. 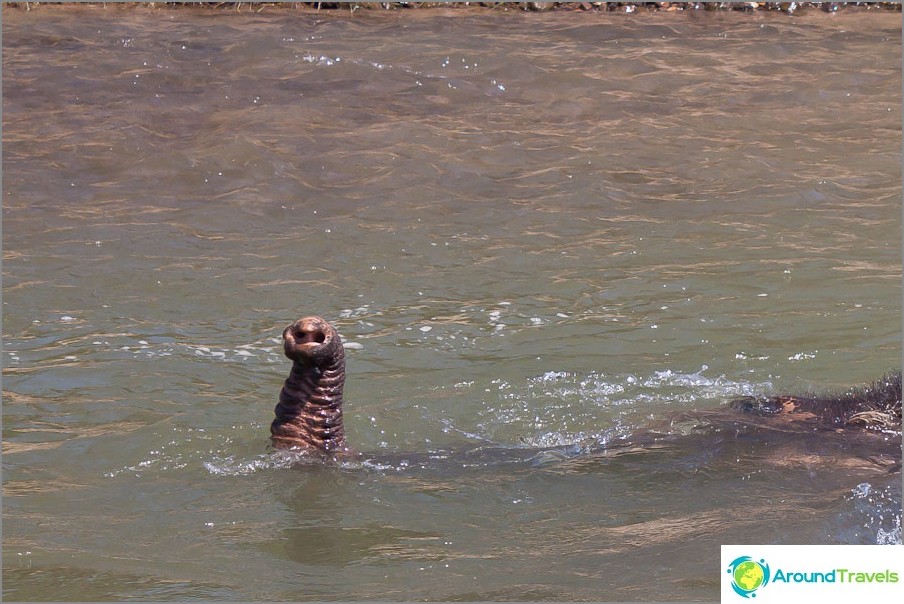 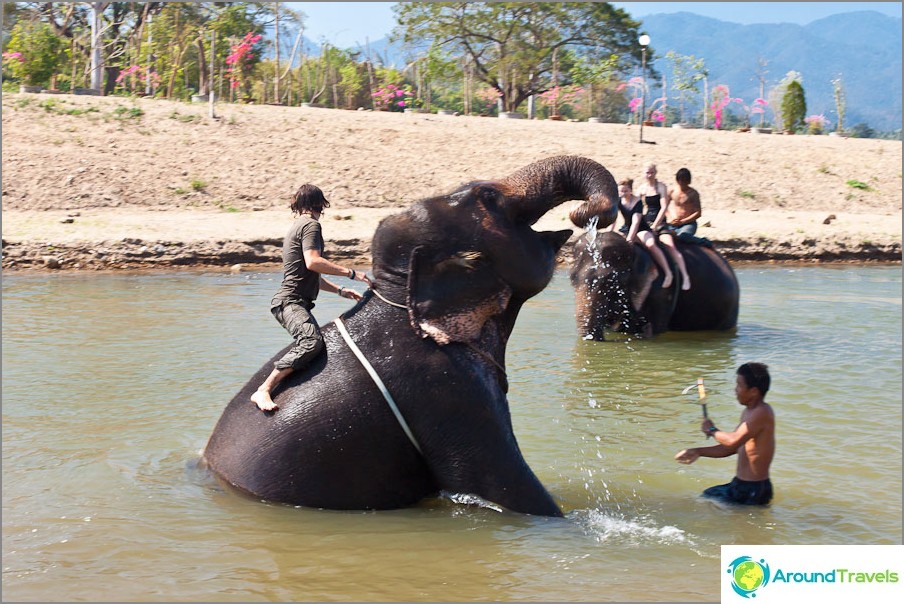 Pretty flew from the back of our eared rider 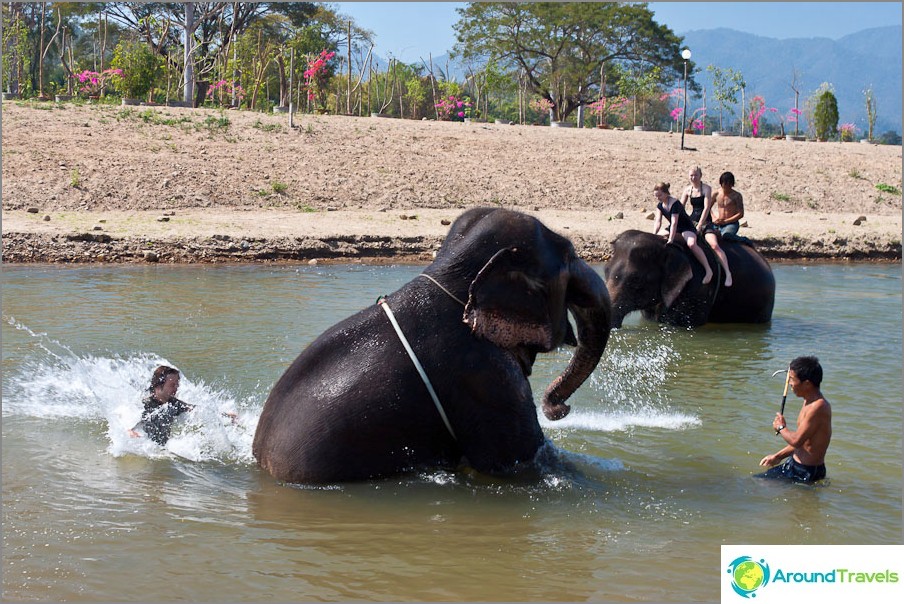 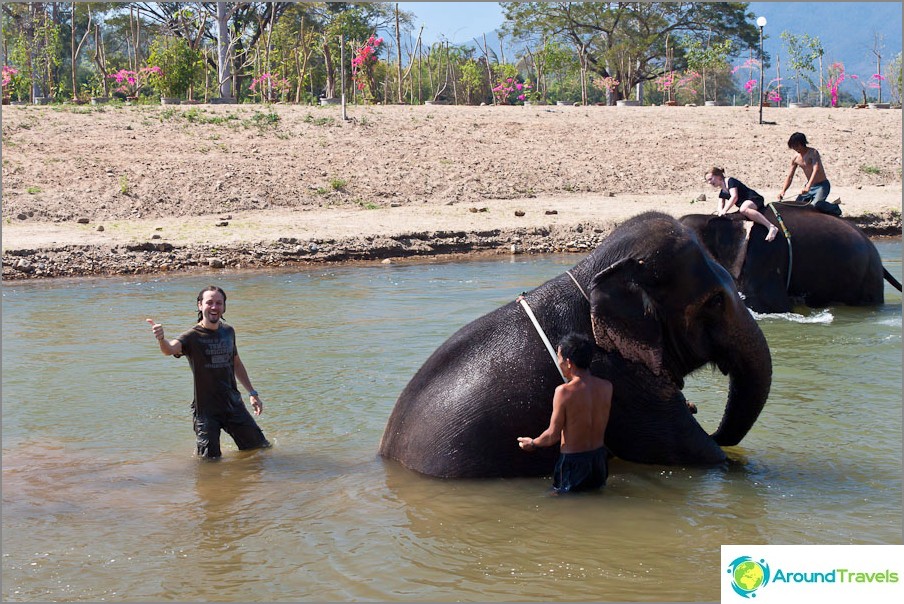 I want to believe that both participants of swimming are satisfied 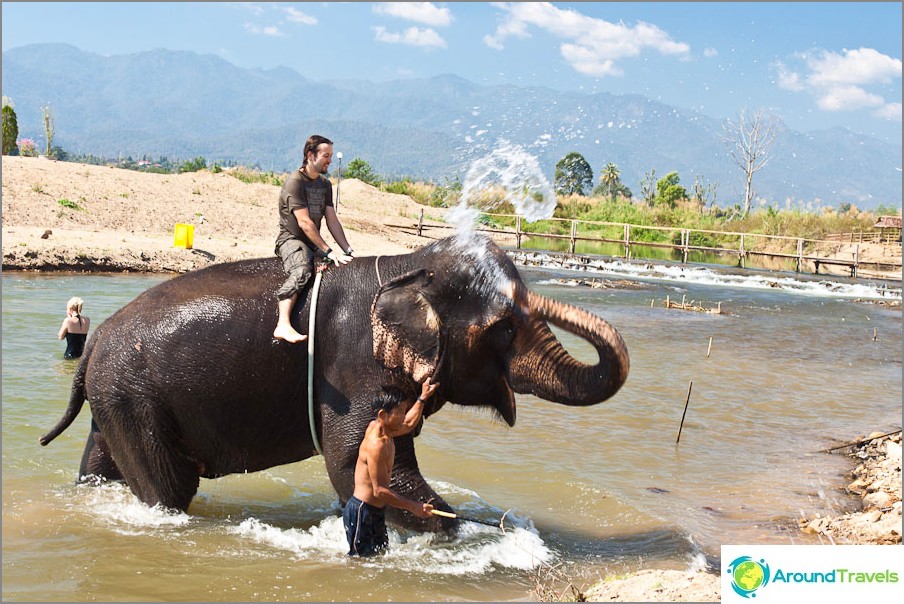 Riding on an elephant and swimming succeeded, it's time to go home

Having brought the elephant in a stall, I fed her with reeds and went to wash off the river water in special concrete fonts. Right in the clothes you climb there, and like you rinse.

Impressions from bathing turned out to be mixed. On the one hand, new experience, because not every day you buy with an elephant. On the other hand, the specific exploitation of animals, violence. In general, I now completely different look at all these pokatushki. Here so the elephant will ride without rest and food to hundreds of tourists and will die. Not sure if it's worth it. It is better to look for elephant farms where they are well treated, and there are some good ones too.

- One hour of riding and swimming in the river in different elephant camps can cost from 300 to 1200 per person (if there are two people on an elephant);

- If the trip is cheap, then you will bathe in your clothes, so it’s better to take a spare one with you for changing clothes. 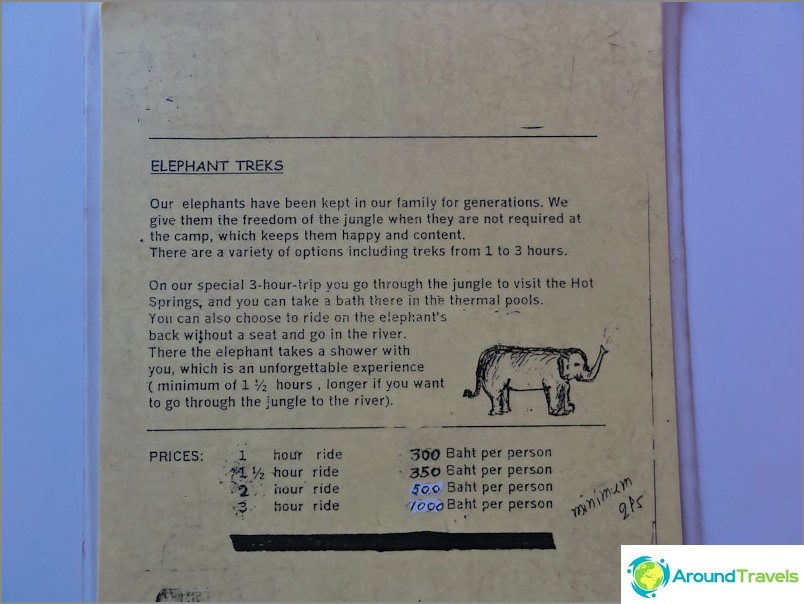 Rates for skiing in one of the travel agencies 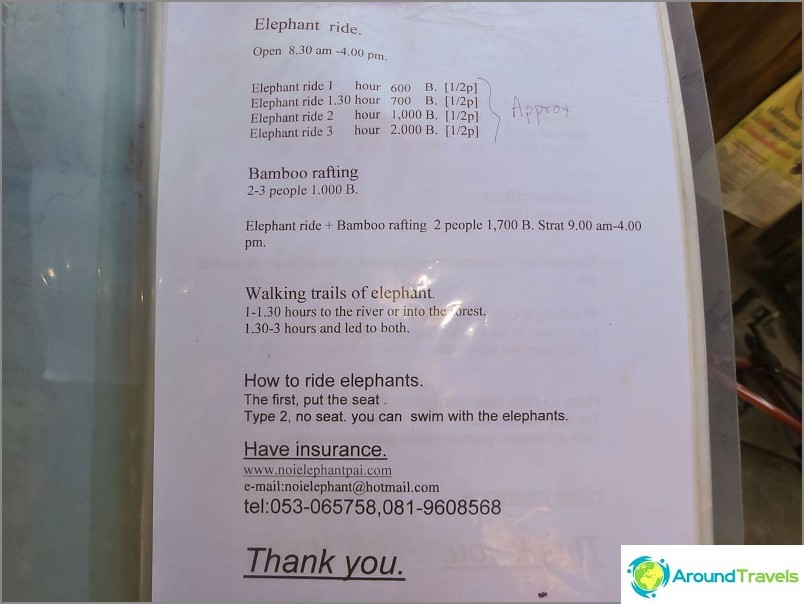 Prices for elephant riding is already in another travel agency

P.S. All information about Pai is collected here. Pai - guesthouses, what to see, how to gethotel can be booked on RoomGuru.

Pai in Thailand or love from the first ...