Home>New articles>Would you like to have Thai monk sex in Thailand?

Would you like to have Thai monk sex in Thailand?

I never thought that the topic of sex in Thailandin any way will be covered on our blog. But apparently fate has its own opinion on this matter, so we fill in the gaps. True, I will tell you not quite about what is usually discussed on the forums

Suddenly, I was almost dedicated to gays ...I came to Wat Chedi Luang in Chiang Mai, and stood there, not far from the entrance, a young guy in orange clothes. So, let me fill up with questions, but talk about that, about this. And then he offers, but let's go and have some tea, because you drink tea, I guess. I managed to tell him that I do not consume alcoholic beverages. But my heart sensed that something was clearly lacking in him in the monastic life. 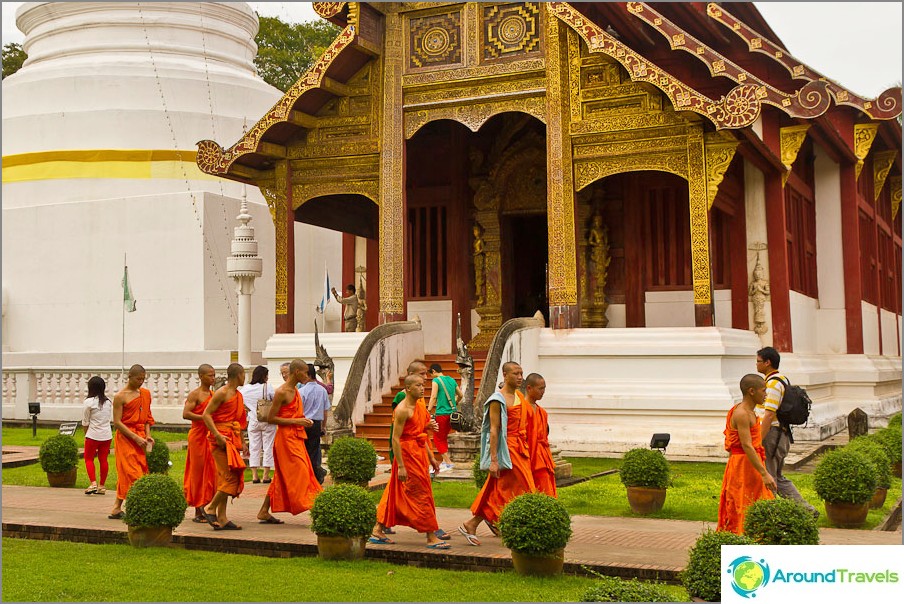 The young generation of monks and who will grow up from them?

Honestly, it was really hard to believe thatlike this in broad daylight, and even with a foreigner can such a thing happen. No, I, of course, read from the fact that gays among monks are full, not only in Thailand, but in general among monastic brethren around the world, not everyone can curb their physical needs. But one thing to read on the Internet, the other - to meet in person.

I also read that many travelershad interesting conversations with monks about the meaning of life, Buddhism, and other educational topics. That killed me. Moreover, I thought that it was necessary to overcome my constraint, since I went without my wife, otherwise she usually answers for communication, and go and innocently go to tea, just offered.

We went into the monastic cell. By the way, speaking there is a computer, and the Internet, and even a printer, not even an ascetic cell at all. So, the first bell was that this kid was somehow very nervous, his hands were shaking as long as the tea was brewing. Then I look, somehow strangely moved to me, although I can hear him perfectly and so, and let me insist on offering massage. Moreover, he seemed to be offering not even how much, how many immediately to get him to go. After several of his movements it became clear to me that in Thai massage he is a complete zeroI went and have an idea, that, yes how. And it also became no less clear that it was time to bring down. The only question is how? After all, I am a completely non-conflict person, and even afraid to offend him (well, all of a sudden I was wrong and didn’t understand so well, but from a pure soul), and we haven’t drunk tea yet ...

Thoughts were frantically rushing through my head,Thailand, this is a puritan country, moreover, it’s not just Tai, it’s north of Tya, there’s still more strictly on the idea, I’m in front of a monk, and not some kind of lady-transvestite, well, there’s no such thing ... And so on the spirit. At the same time I frantically thought how to wash off. Thank God there was a phone call from Max (Chiang Mai’s longsteer), he has probably never been asked such stupid questions in his life. Like, Max, listen, the monk called for tea and seduces me with a massage, do you think he is gay or am I after Russia just so twitchy and I don’t understand anything in this life? After the call, all I had to do was say, I'm sorry, man, but I need to run urgently to meet a friend on the other side of the city, I’m not into tea right now and not up to your massage. How can time to call sometimes

Ugh, disgusted as, well, I did not expect suchdirty tricks from a monk ... He went to the temple to think about his sinful life and on you. By the way, the boy was lucky, he would have been different in my place, so he would pick out the fragments of his glasses from his eyes, sliding down from the wall ...

Moral of this fable

Do not relax too much and do not buildillusions. Everywhere on the planet people live, and they have such a unifying thing as human nature. And it does not depend on nationality, nor on religion, nor from the place of residence. Apparently I relaxed too much in Thailand, but I idealized this country too, so I needed such a clarifying situation.

Yes, this does not mean that you do not need to go to Wat Chedi Luang, the temple itself is quite a good one with good energy and an interesting ancient stupa.

P.S. None of the monks in the picture has a relationship to history, all names are fictitious, the author, monks, and animals have not suffered