My friend Vitalik continues to travel around Russia andrecently visited Ingushetia. As I said, he does not have a blog, so the guest post is not to advertise his resource, but just to share his impressions. By the way, can we make a separate section here, where other people will publish similar stories? I mean not in the form of guest posts (when I edit and weed out), but simply as a separate tape. And then you can select the best and announce for everyone. What do you think? Will there be someone else to write?

I have long wanted to visit the notorious "resortsNorth Caucasus ", the development of which in our country are allocated fabulous money. And then the low-cost "Victory" opened flights to Vladikavkaz. Taking a short vacation, we went on a small tour of the Caucasian republics, one of the points of which was the mountainous Ingushetia.

Brief geographic reference. The Republic of Ingushetia is the smallest entity of our country (a little more than Luxembourg), one half of which is on a plain, and the other is separated from it by a high mountain range and is located in deep gorges between it and the Main Caucasus Range. It was the narrow, easily overlapping gorges at one time helped the residents to successfully fight off the invasion of enemies, which made it possible to preserve almost all the objects of the Middle Ages almost intact.

From Vladikavkaz to Ingushetia is within walking distance - from the city center by taxi less than an hour away along the Georgian Military Road. But there are nuances.

At the congress from the federal highway as a traffic police post,surrounded by tires, like a post from the news about the Middle East, we were stopped, the driver (who had prudently removed the drafts from the roof) was taken to him. “We don’t have enough protocol,” he says later. They need to sign, they say. ” As a result, I drove quite easily in a few minutes from the protocol, and we managed to drive another five hundred meters. Next, the gorge overlap the huge gate with the guards at the entrance. They took their passports, wondered where we were going, for what purpose, whether we were bringing something forbidden (I wonder what could be banned for transportation to Ingushetia at all ??). Rewrote the data, let go. After another 10 minutes, we arrived at the Armhi tourist complex. 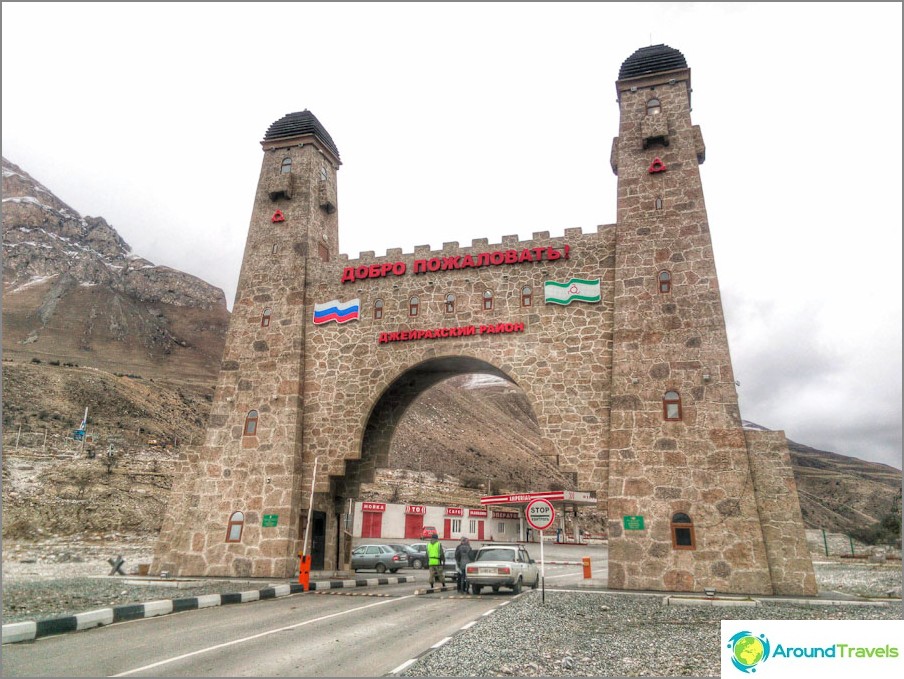 Armhi is the only ski resort (andthe only resort) of Ingushetia. There is a cable car, two trails plus one training, swimming pool and other entertainment like a rope town and trails for mountain bikes. A normal restaurant worked only at the upper cable car station. As we were assured at the reception, the cable car will work until the last guest. Yeah.

The cable car, as it turned out, is open until 18-00. As an excuse, we should say that we arrived in the offseason - mid-April - and the base was practically alone.

In the fight against hunger and the prospect of rising more350 meters (for comparison, this is the height of the largest skyscraper "Moscow City) won the famine. Only 40 minutes of ascent and 1780 snow-covered steps - and we are on target. I must say, the goal did not disappoint - in the restaurant they cooked tasty and rather inexpensive. A specially invited chef from Azerbaijan served the dishes and told about them. 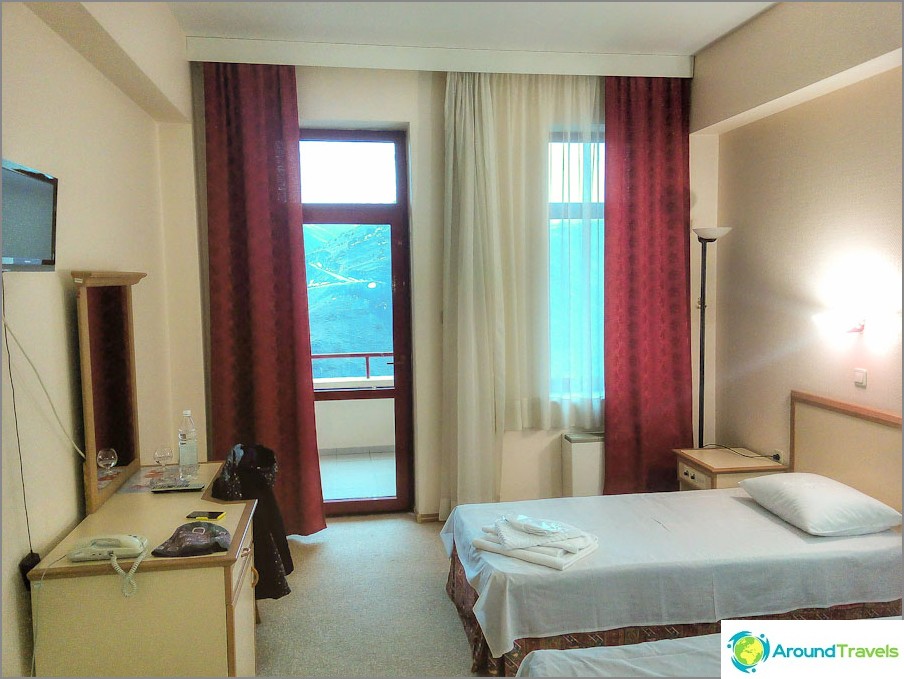 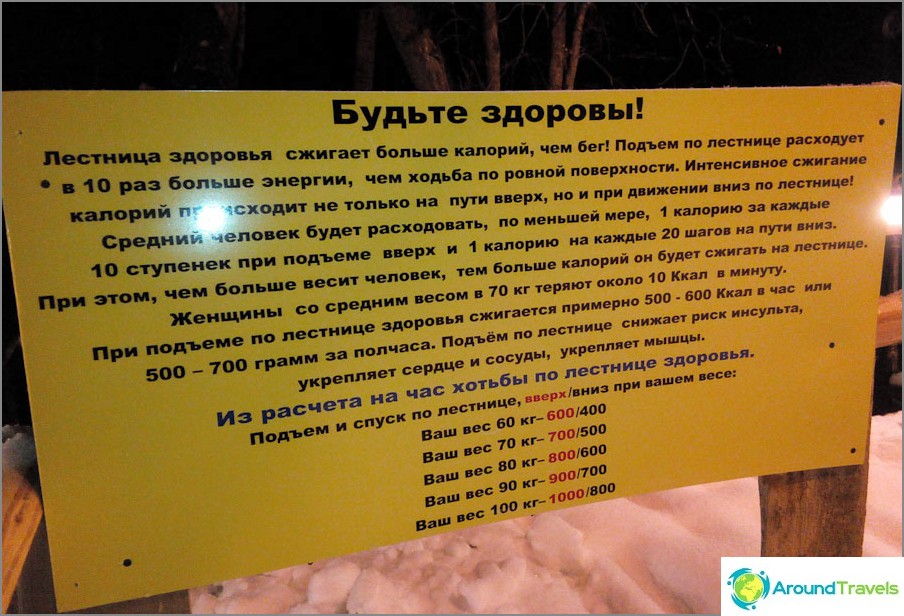 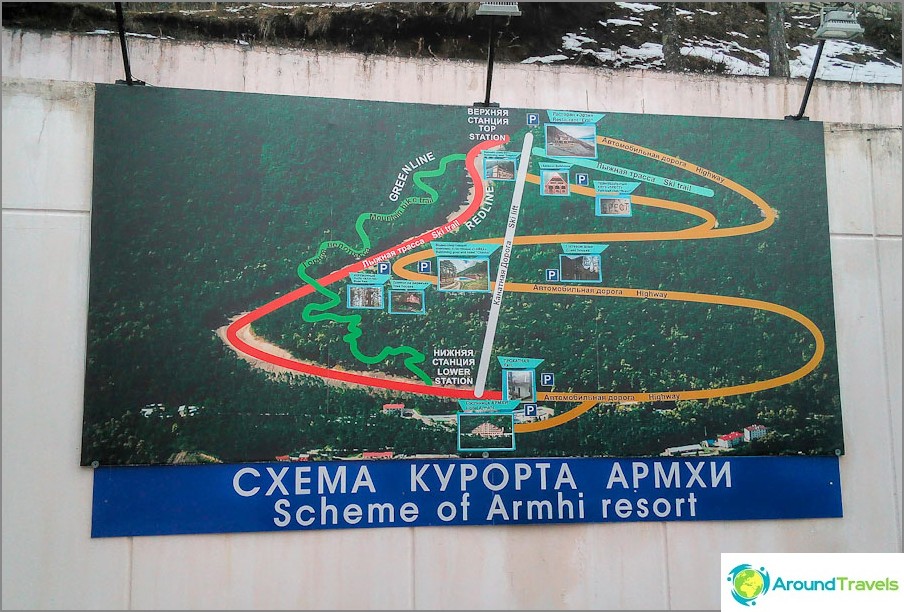 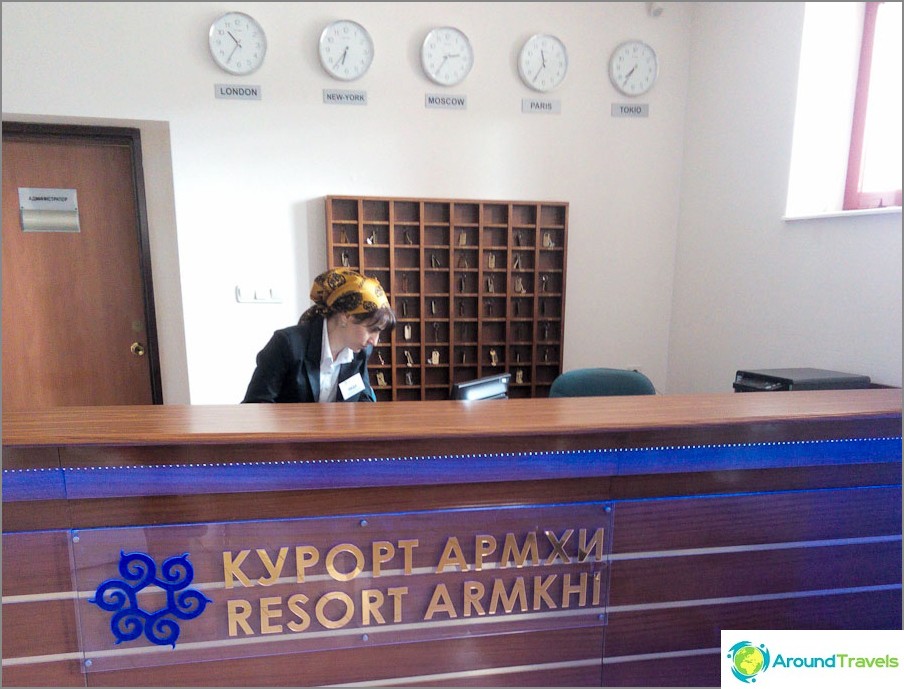 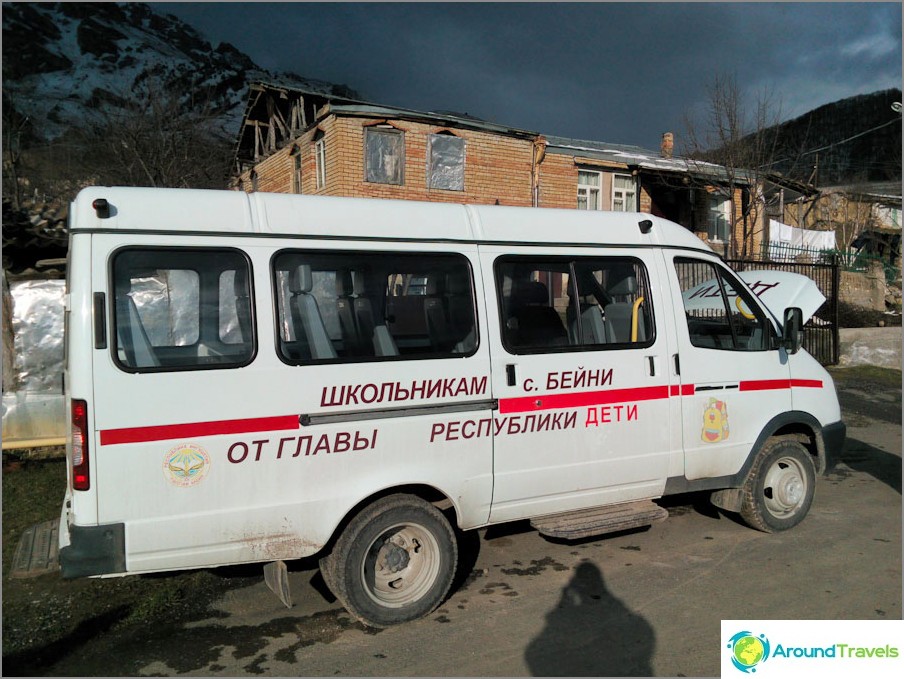 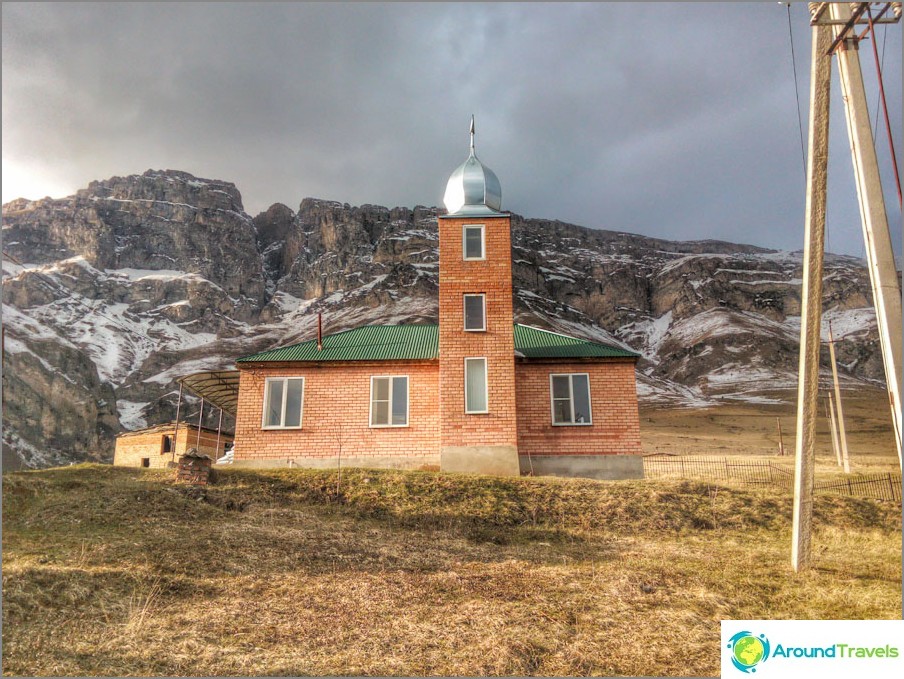 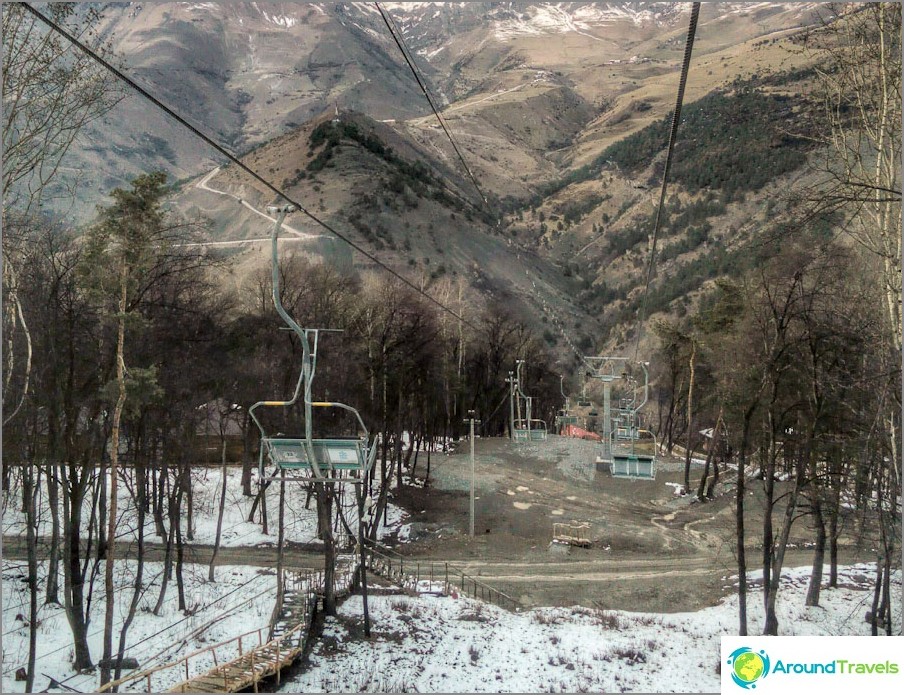 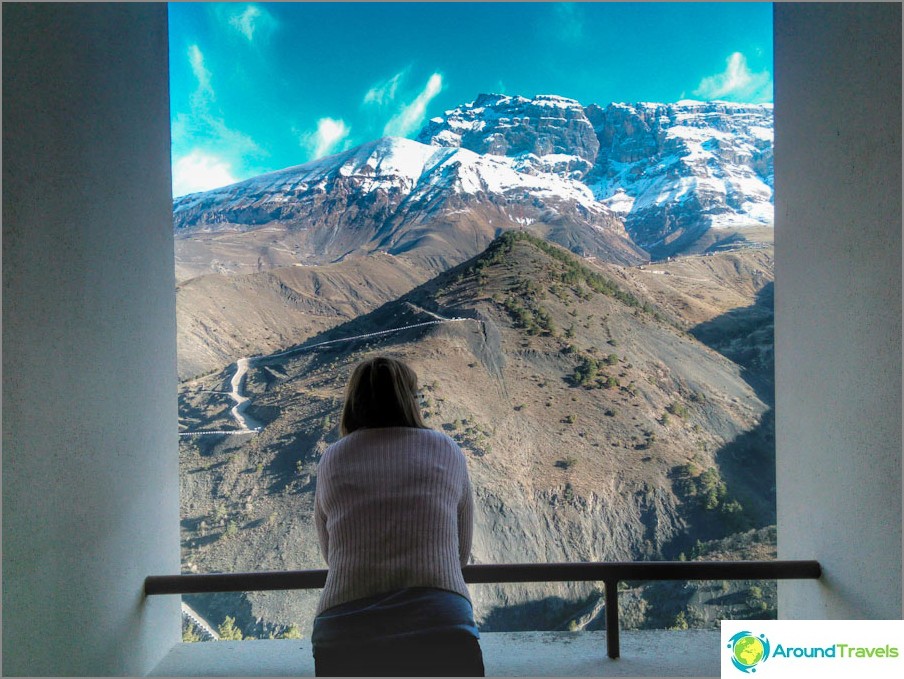 Tour of the gorges, attractions

The next day we planned to walkalong the gorges and, possibly, climb a mountain. In the evening I asked the guy at the reception where you can go nearby or go. “And tomorrow, at nine, there will be a guide,” says, “He will tell everything.”

There was no guide by nine in the morning, or by ten,despite all the assurances at the reception. Only after my request to call a taxi, the kid nodded and dialed the number, but obviously not a taxi, but to hint to the “guide” that if he didn’t come right away, then we would do without him.

The guide turned out to be a young guy on nine too,who obviously knew his country very well and could answer any question, but he told quite a bit of himself, as if such a bored taxi driver in the long run. Well, according to the traditions of the Muslim part of the Caucasus, he told all this only to me, sitting in the front seat, regardless of the fact that he was not heard from behind (where the spouse was located).

But despite all this, our four-hourthe trip could not be called boring. We managed to visit the high mountain passes (it’s a pity the weather didn’t allow to see Kazbek), go down deep into the gorge, look at the remnants of the newly inhabited tower towns, get to the most ancient Christian church on the (official) territory of Russia, after taking the keys from the local residents, as well as see the original ancient fortress "Vovnushki", carved into the rocks at the entrance to one of the gorges. And this is despite the fact that we did not see everything on the way. For example, the sacred Base-Jumper Mountain Tsey Loam and several particularly well-preserved tower complexes remained uncovered. But all this would have taken more than one day, which we no longer had in stock.

Returning, we (somewhat rashly) decidedwalk to the neighboring village of Beyni, which was located on the opposite side of the gorge and was clearly visible from the hotel. It is reckless - because, although the straight line distance seems to be quite small, in fact it is necessary to do about 400 meters vertically downwards (and this is several kilometers of serpentine), and then no less upwards. I was lucky that the locals are quite willing to drive on a ride. To be sure, I still recommend ordering a taxi for a small fee. 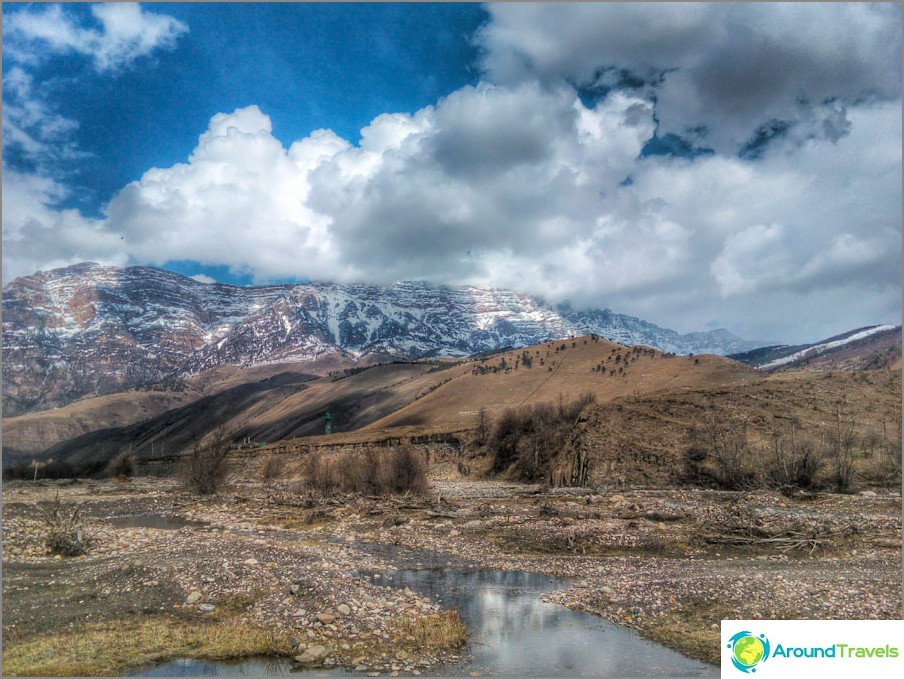 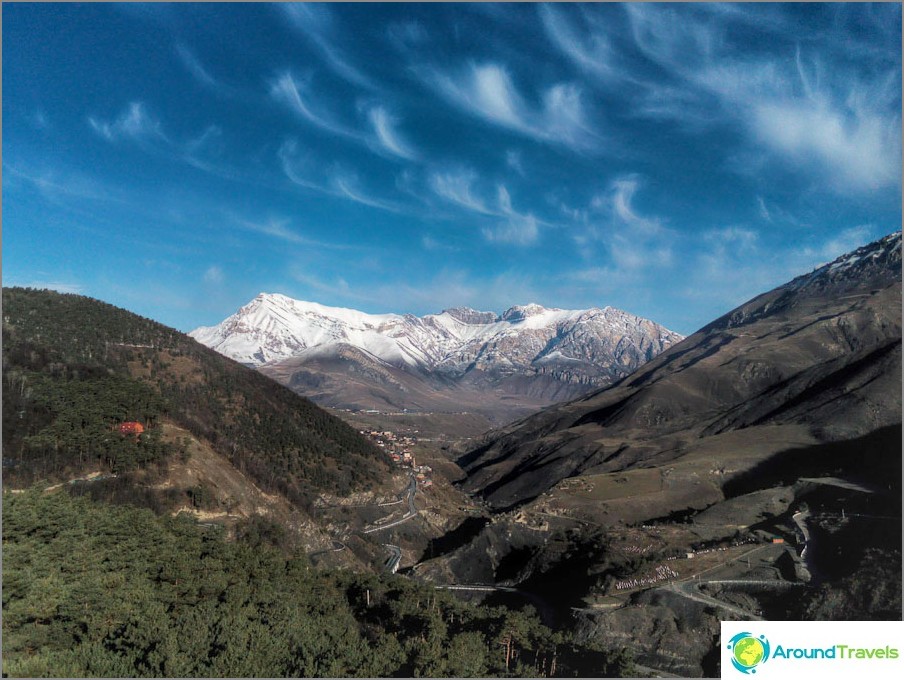 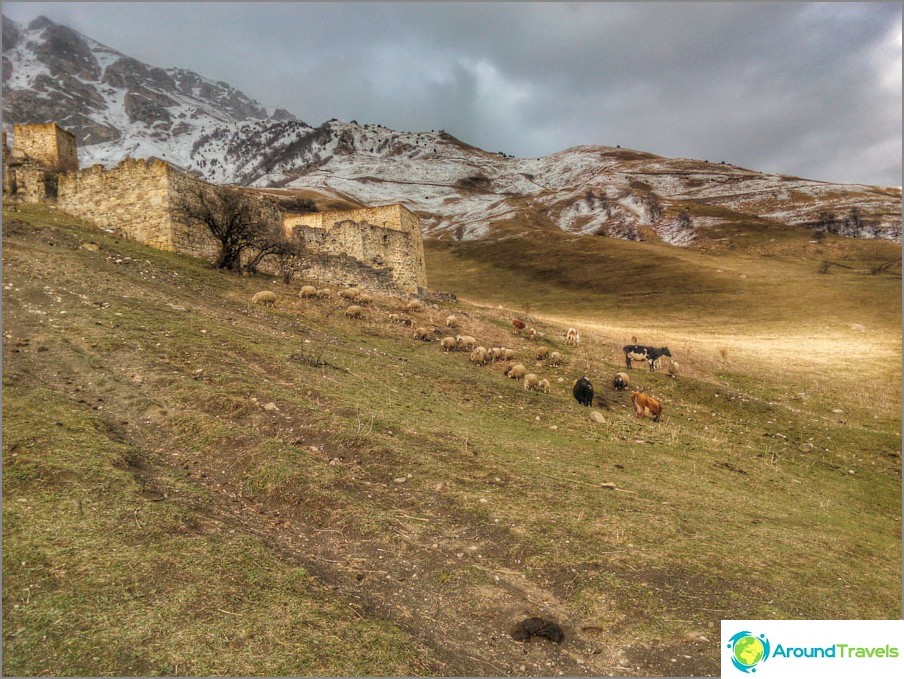 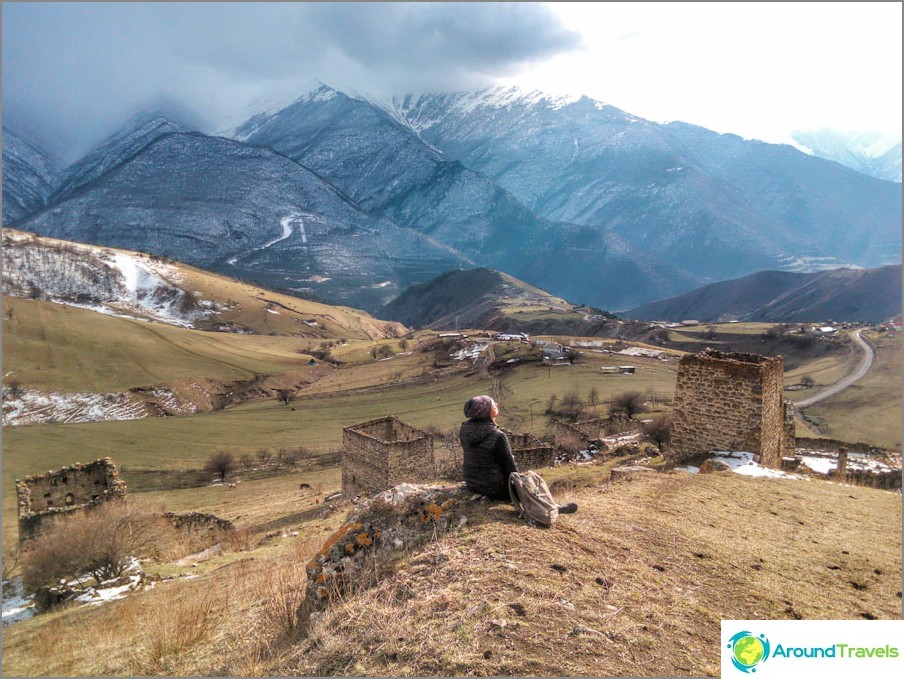 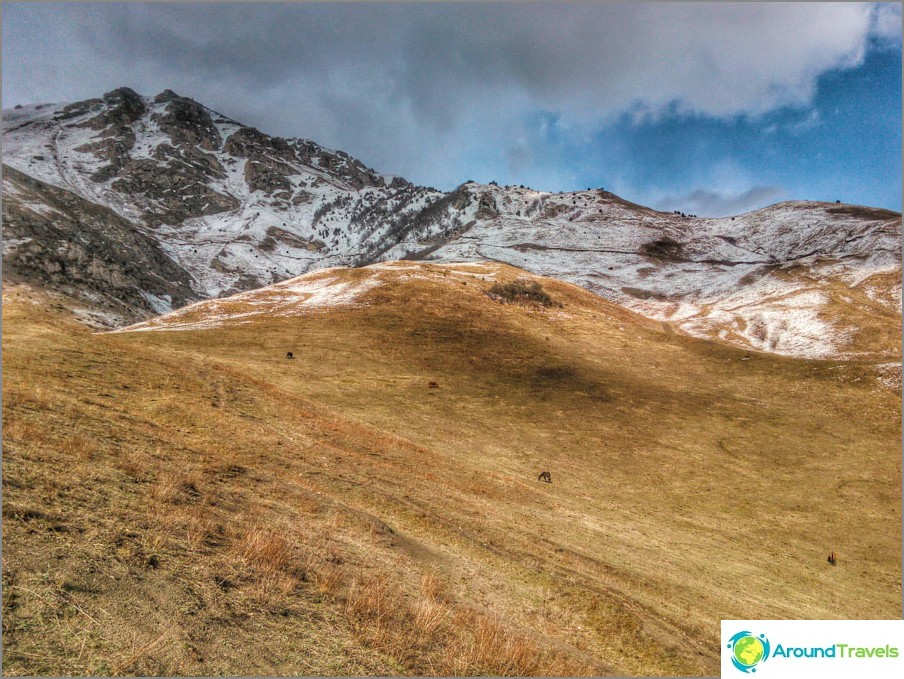 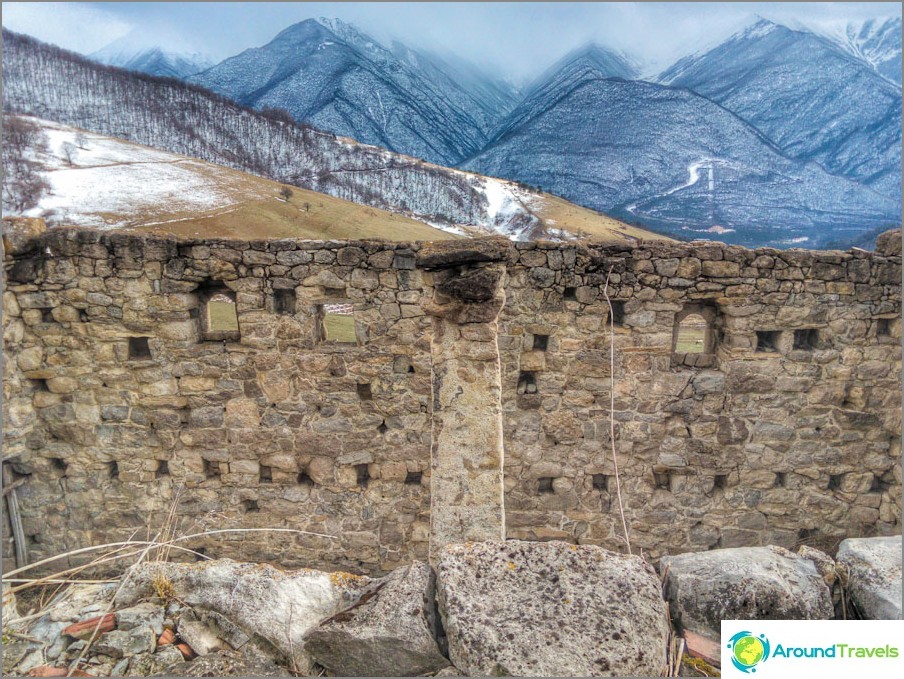 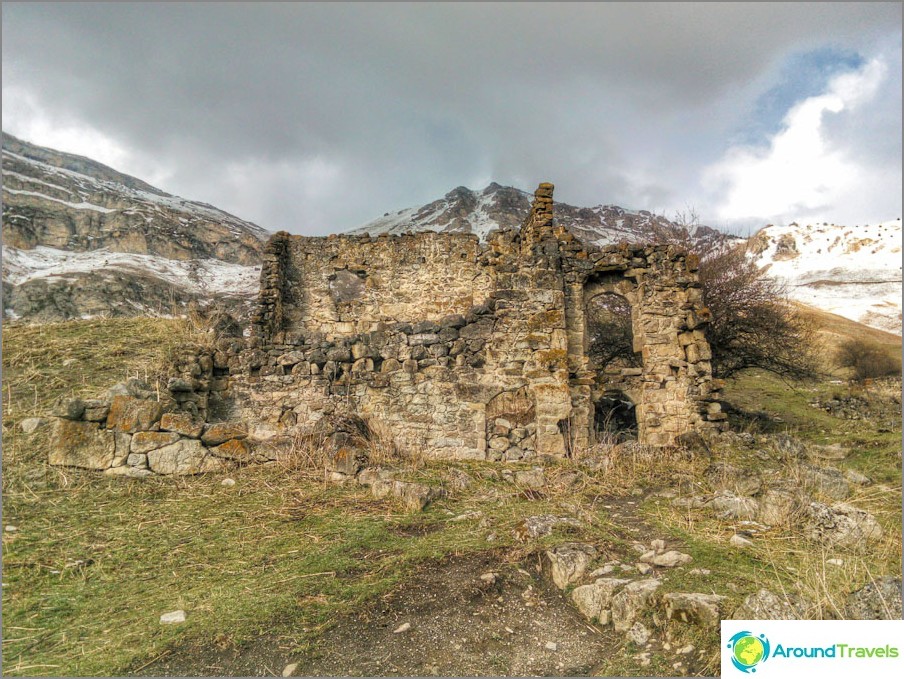 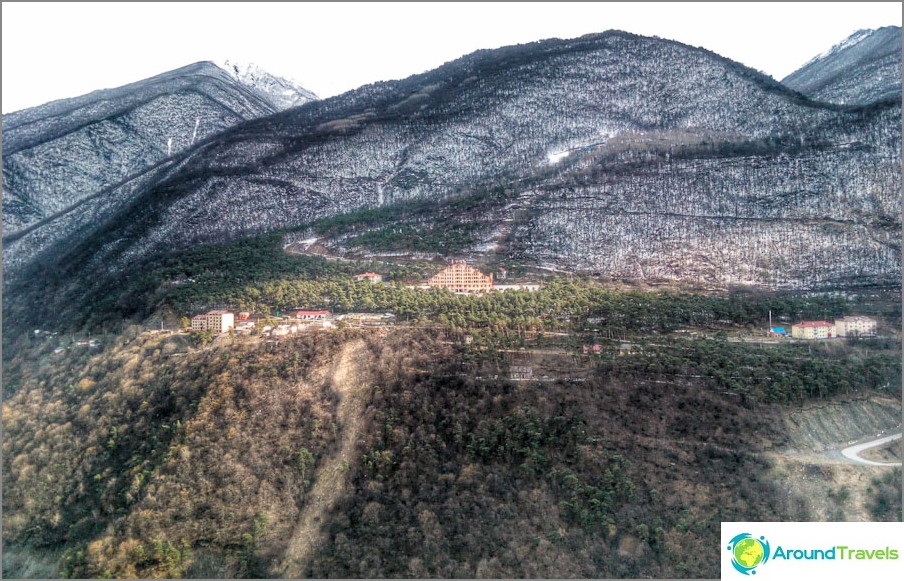 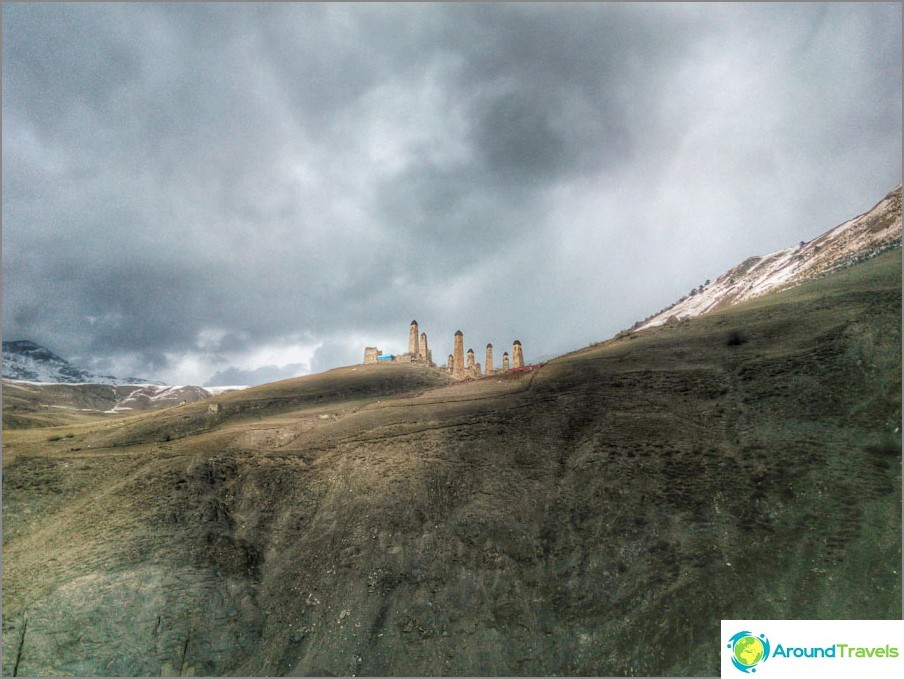 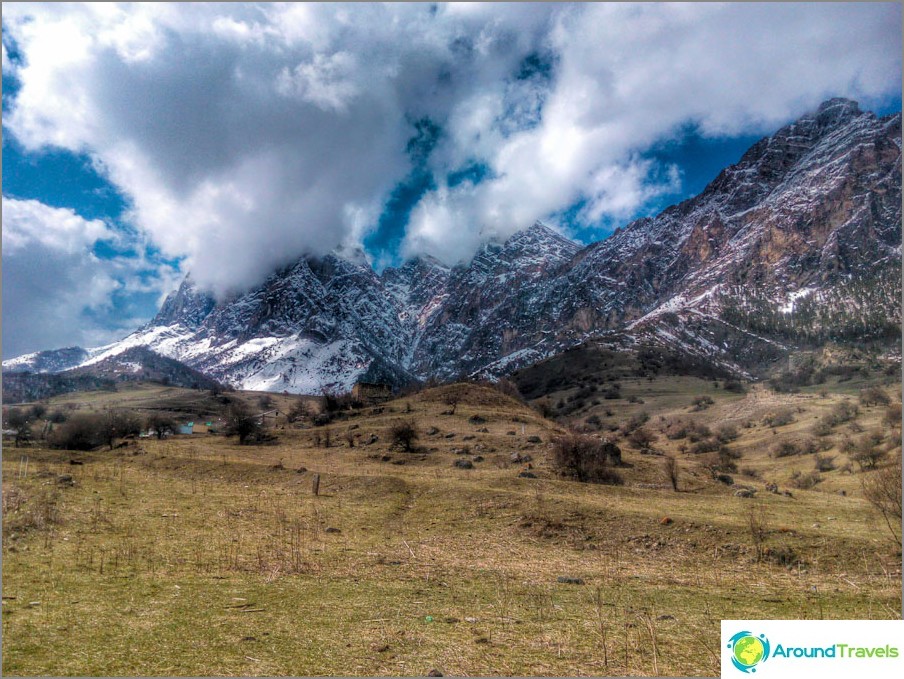 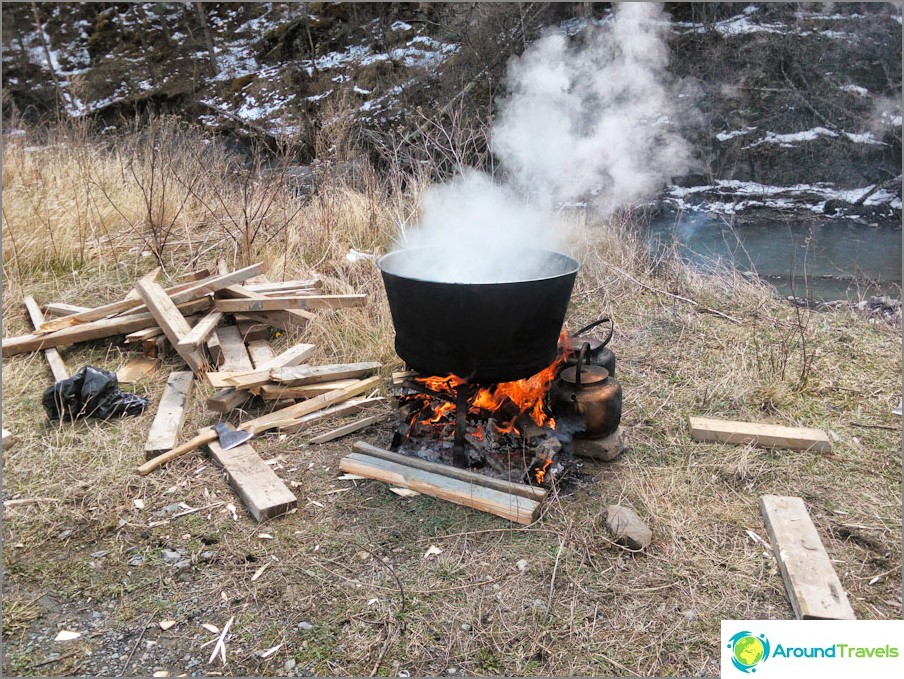 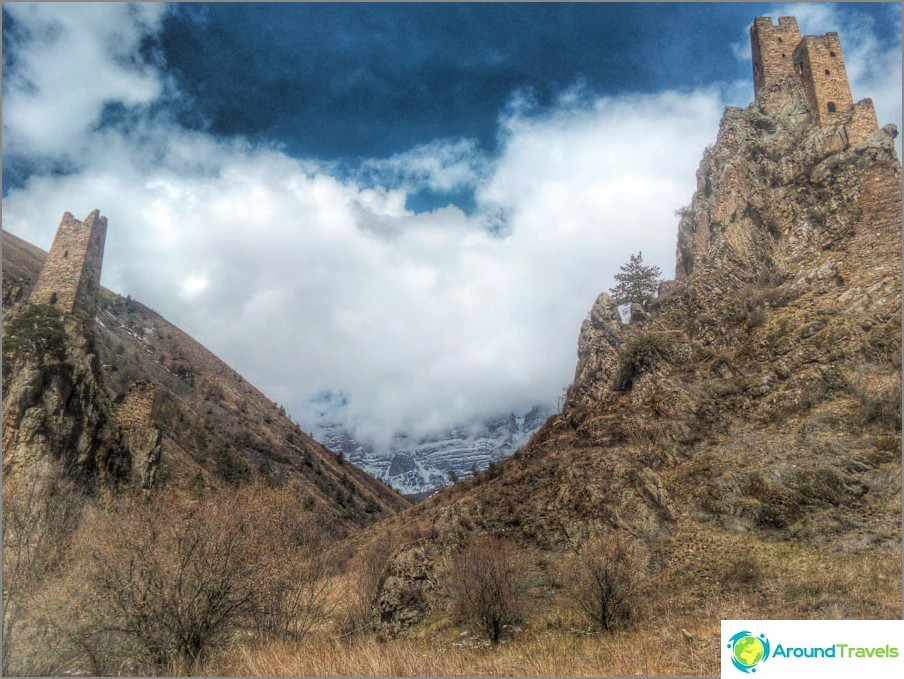 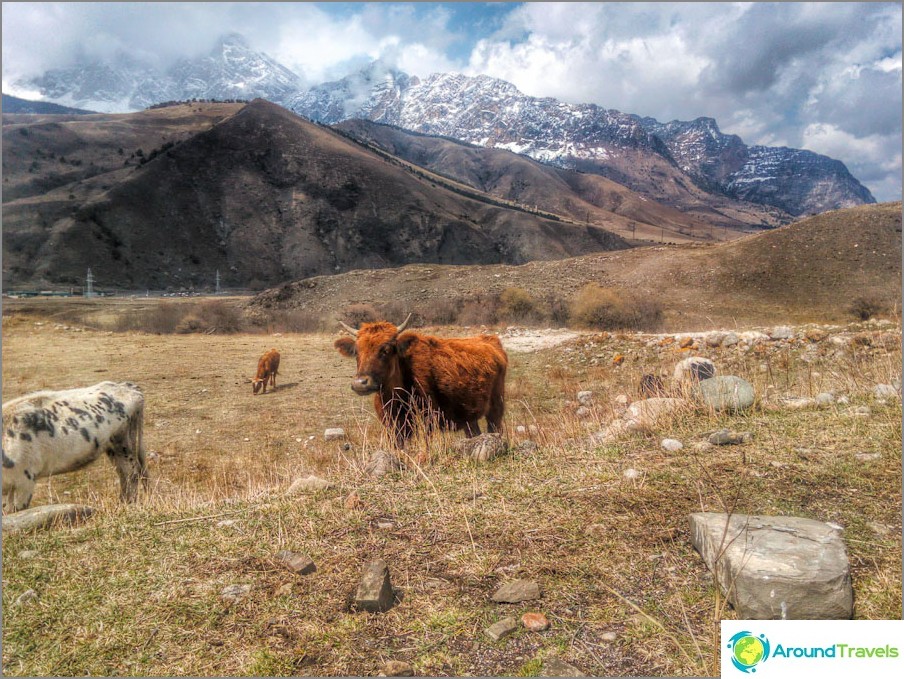 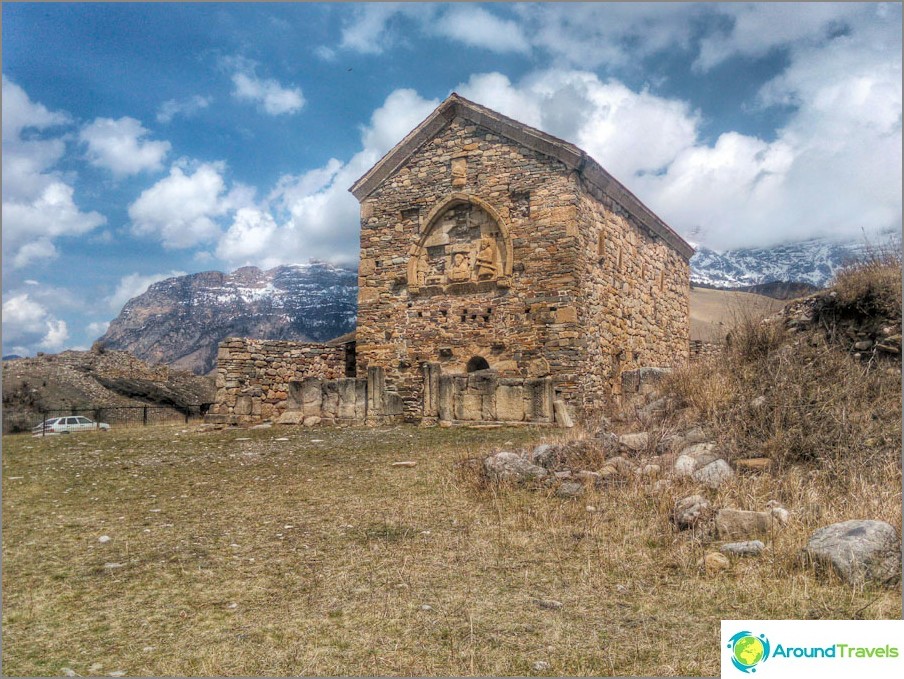 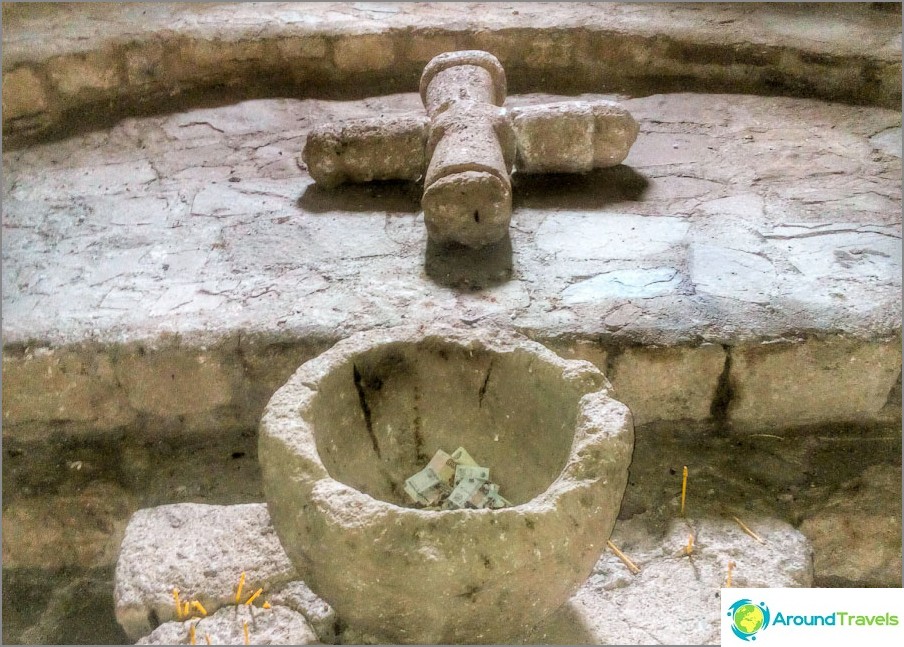 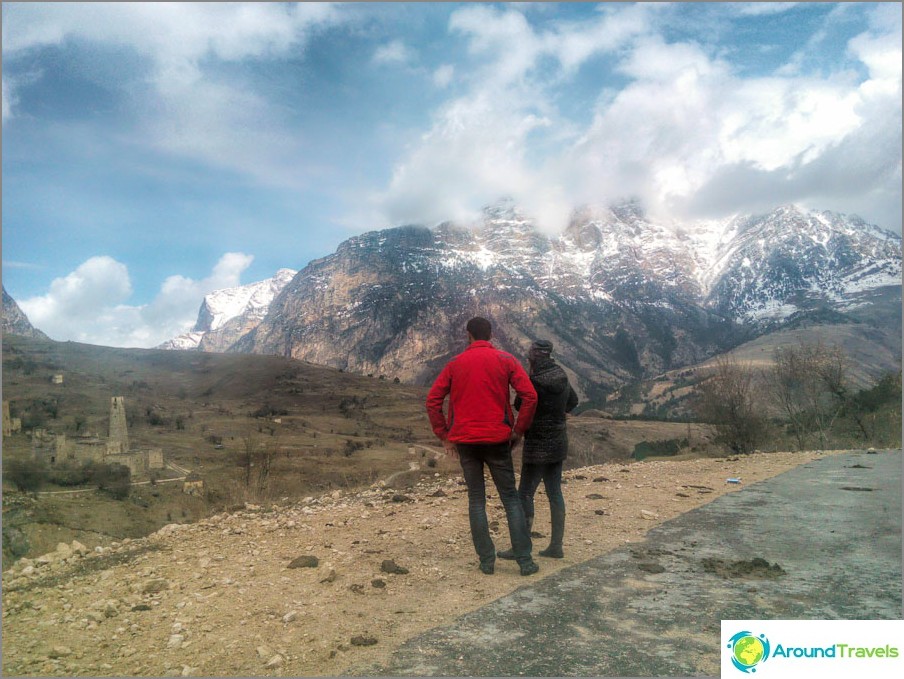 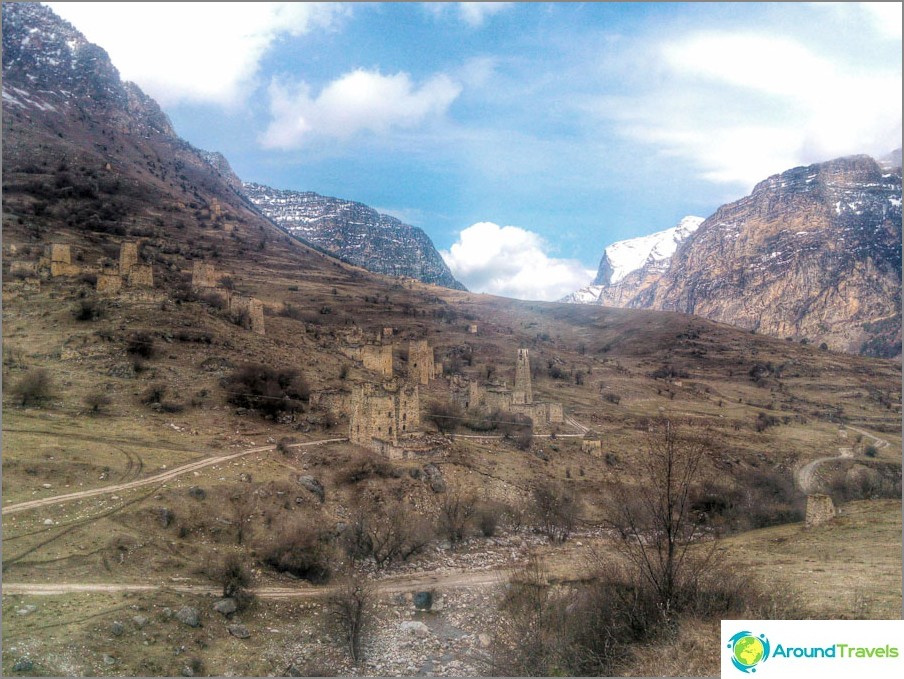 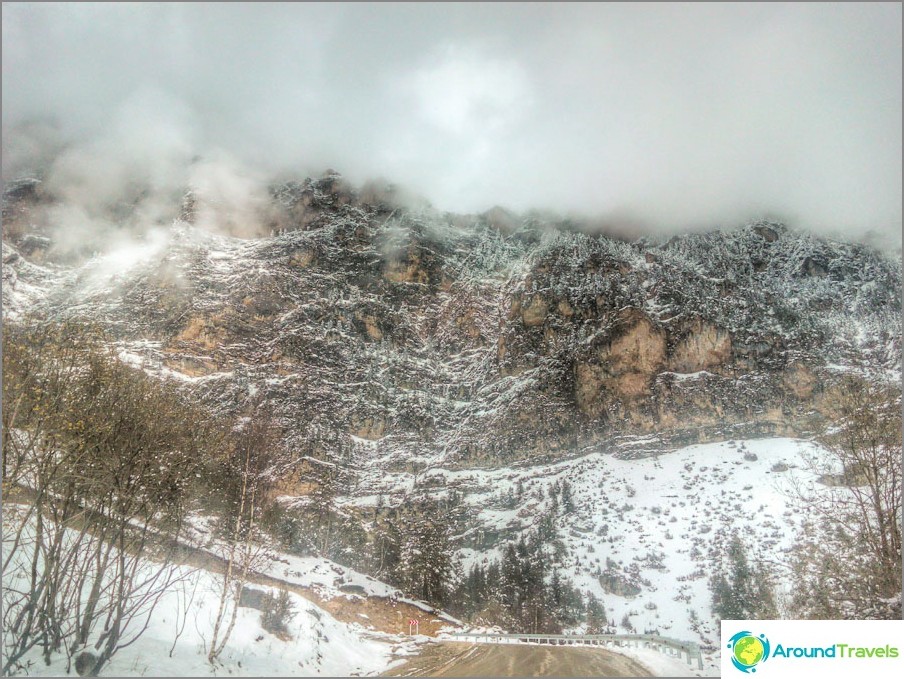 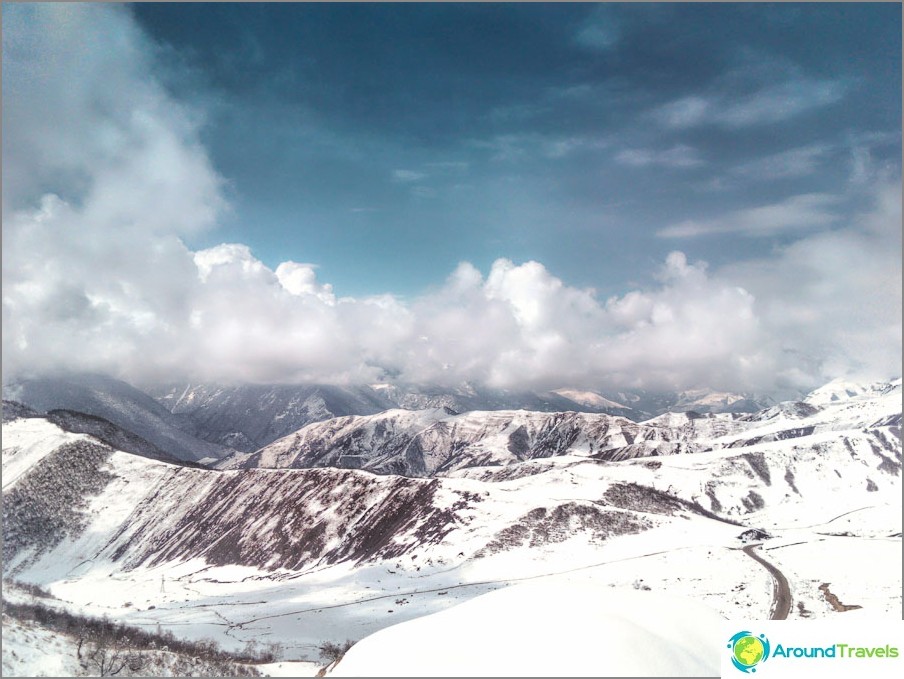 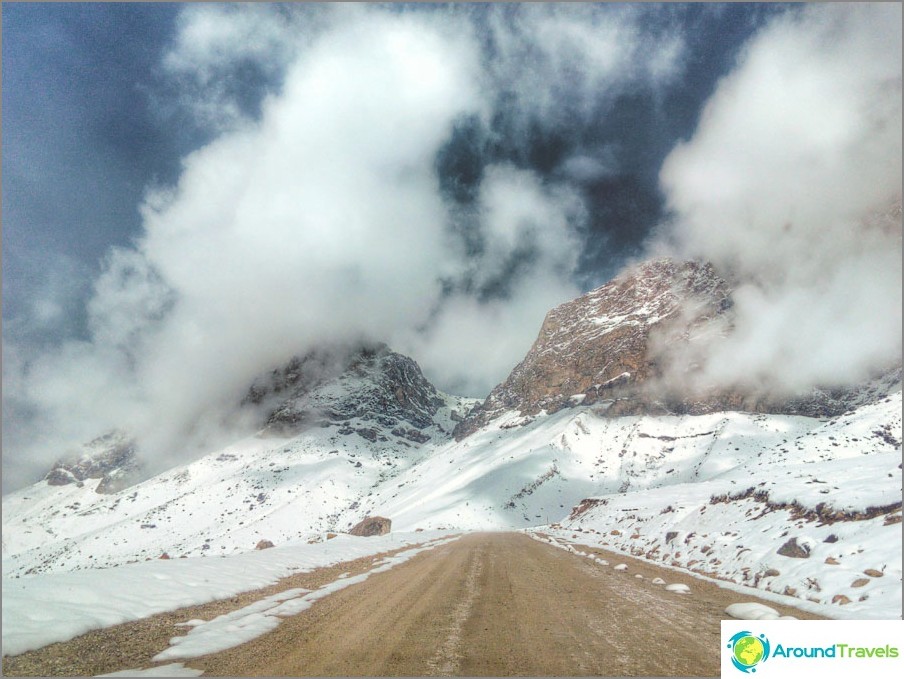 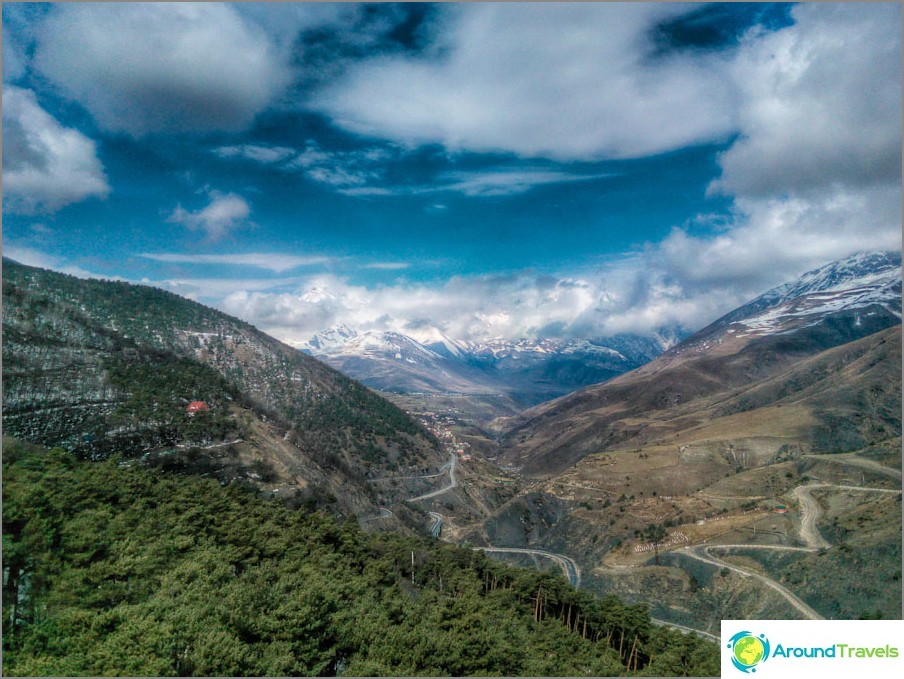 In conclusion, what other visit guidelines can be given:

Flight: Moscow-Beslan, 10.000r for two round-trip loukosterom "Victory". The airport in Beslan is located 20 km from the center of Vladikavkaz, so it is advisable to order a Beslan taxi at the airport, take it to the city for 350r. Taxi from Vladikavkaz to "Armhi" - 600r car. You can still fly to Nazran, but it will be expensive. In general, the “Victory” and Vladikavkaz was an expensive route, everyone flew from Minvod, it will be far away.

Housing: Double room in a hotel in "Armhi" is 2.300 rub. Breakfast is included, but scanty in Caucasian: a choice of porridge or scrambled eggs, plus tea. Prices in the restaurant are low, a check for two with food from the belly and homemade wine - 1.500 rub. We just called the hotel, they say - now there are places, no need to book. In general, there may not be places during the season, you need to advance. There are also guest houses with all amenities, but the prices were not recognized.