Home>New articles>Stalin's dacha in Sochi is a story, not an attraction

Stalin's dacha in Sochi is a story, not an attraction

One of the most controversial attractions,which causes conflicting feelings among people of different generations. Stalin's dacha in Sochi is the only dacha that bears the name of Stalin and officially has the status of a museum. It is located within the boundaries of Greater Sochi, at the foot of Mount Akhun at an altitude of 160 meters in some super-unique place of power, where the leader of the nation restored his health especially quickly and efficiently. At first I didn’t really want to go there, there were too many negative reviews, but then I became curious and decided to personally touch the story and make my own impression. Moreover, it is convenient to go there quickly, and parking is possible right at the gates of the cottage - a great lazy option for excursions.

I initially overlaid with reference books to giveyou full information on the history and fate of attractions, but then I remembered that no one likes spoilers. So I leave it to people who every day spend every hour on Stalin's dacha excursions. Yes, guys, they will not give you just to come and walk around the premises, after all, material values ​​and all that. I myself came to a light prostration early in the morning, somewhere at half past ten. He parked in a frighteningly free parking lot, entered the arch of a green building and found a tropical oasis in the middle of a stone courtyard. Behind the flower beds and palm trees there were people, about a dozen people, as it turned out, they were waiting for the tour to begin.

After buying the ticket I had to wait completelynot long before the start of the inspection. What I saw inside - I will show, but I will not tell, come and see for yourself, it will be more interesting. I note only that the aunt's guide turned out to be an unusually fascinating storyteller. She did not pour water, not ekala, not mekala, and in pure and understandable Russian she calmly told the story of the place and its main inhabitant.

Walk to be only 5-6 rooms, plustwo balconies, the rest of the buildings are closed to the public. But they show the most important things, so I did not feel deceived. Inside it is very cool, quiet, it smells deliciously of wood and old age, and vintage interior items excite the imagination and curiosity. As a person who visited the pioneers and still remembers something good from the Union, it was really interesting to find out some previously unknown details about the man who in my childhood was called the leader. For those who were born after zero and did not find life under socialism, the giving of Stalin in Sochi is just a mansion in the middle of a forest on a mountain. And Stalin himself for them - the character of memes and computer games. 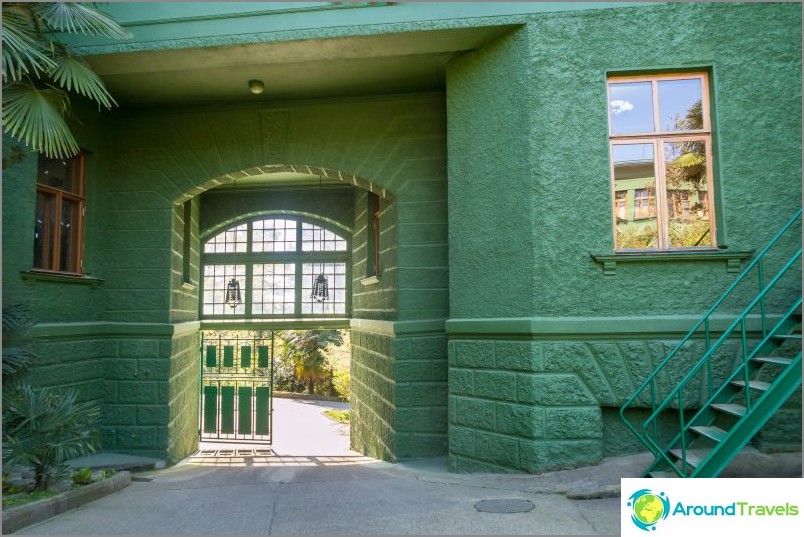 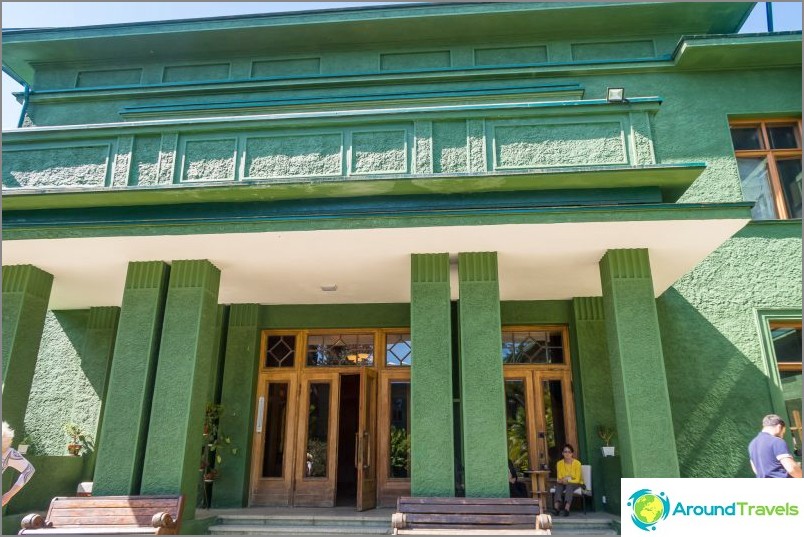 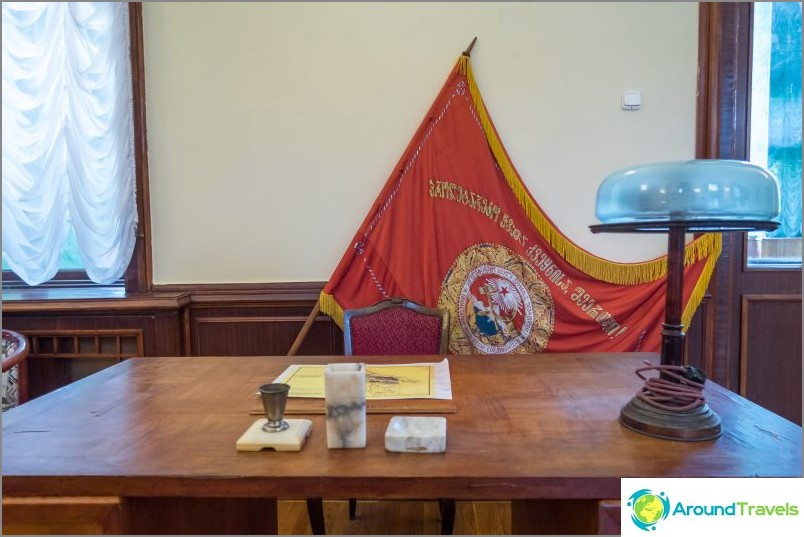 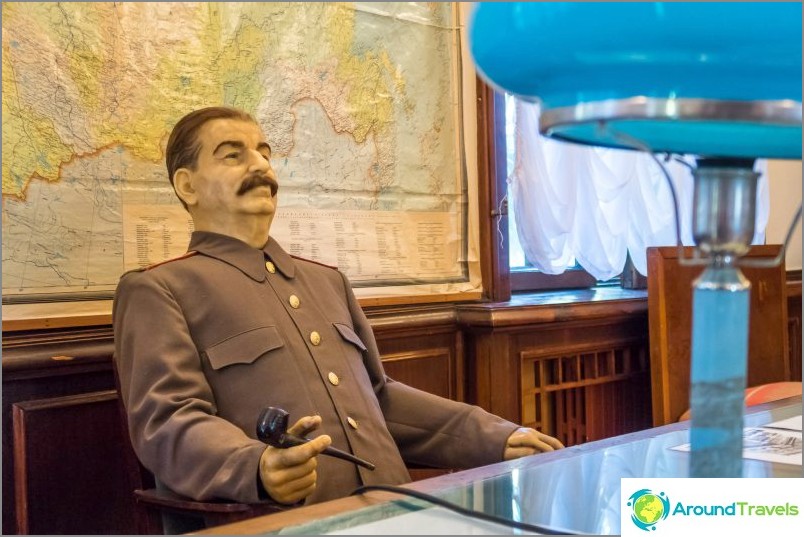 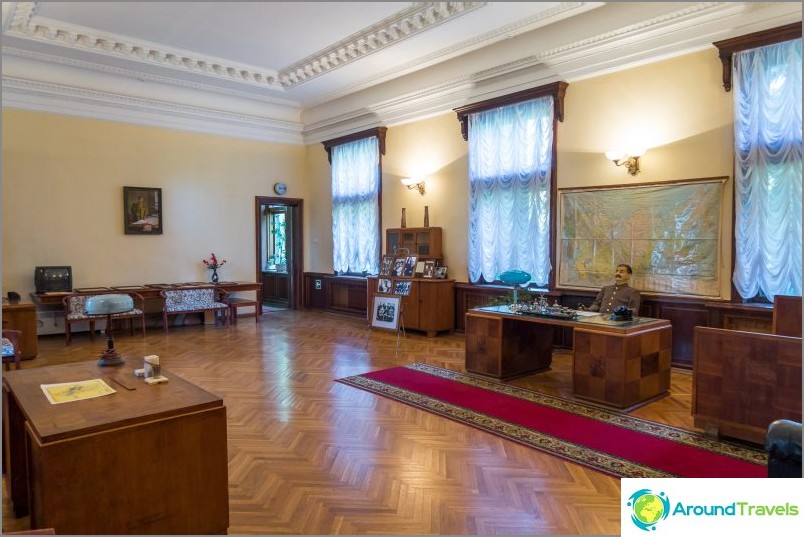 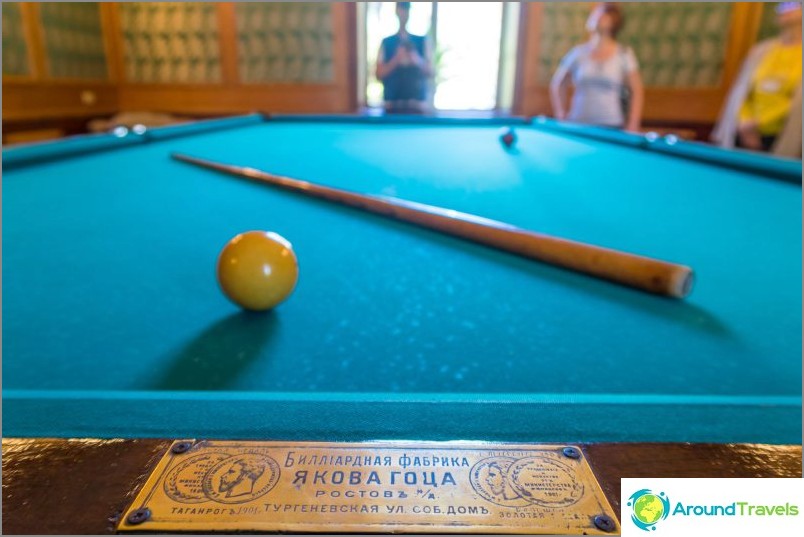 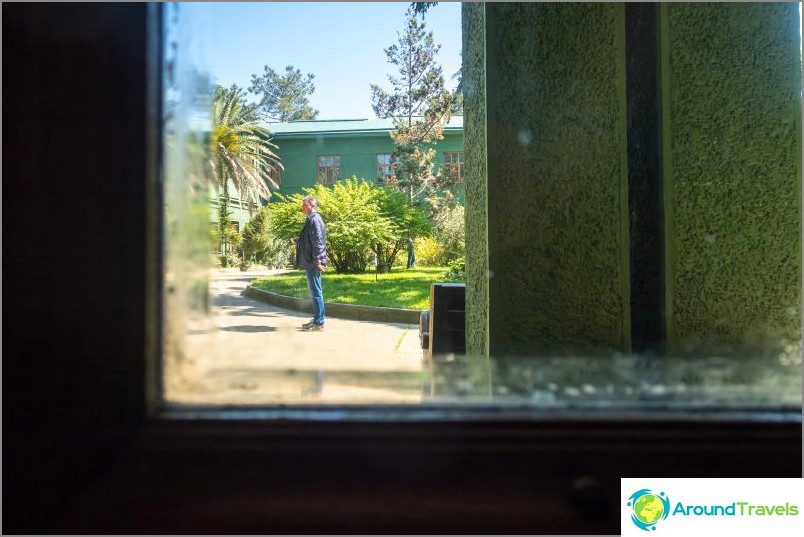 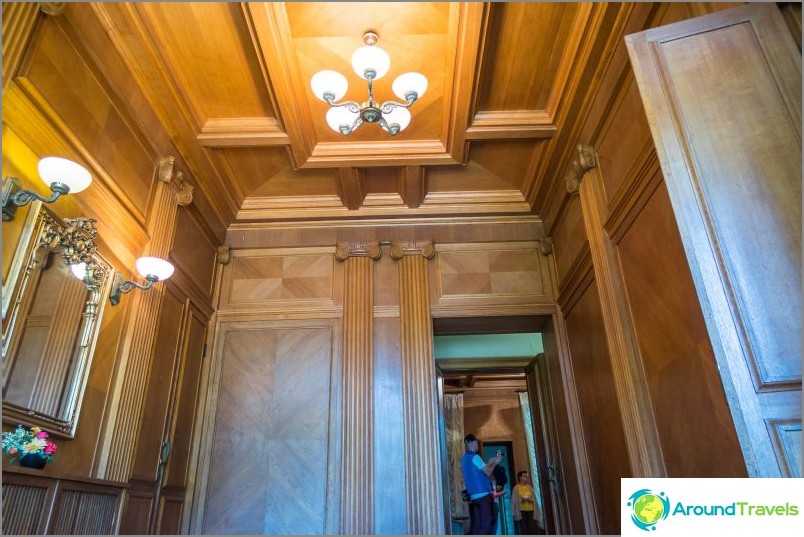 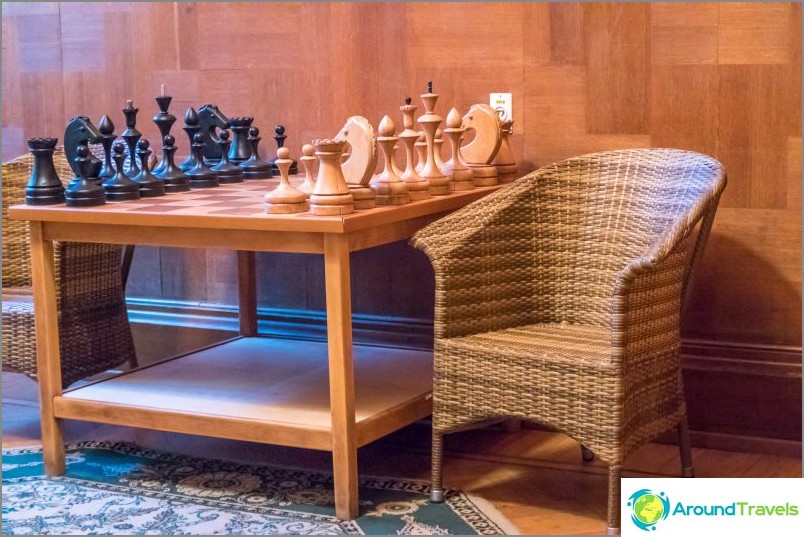 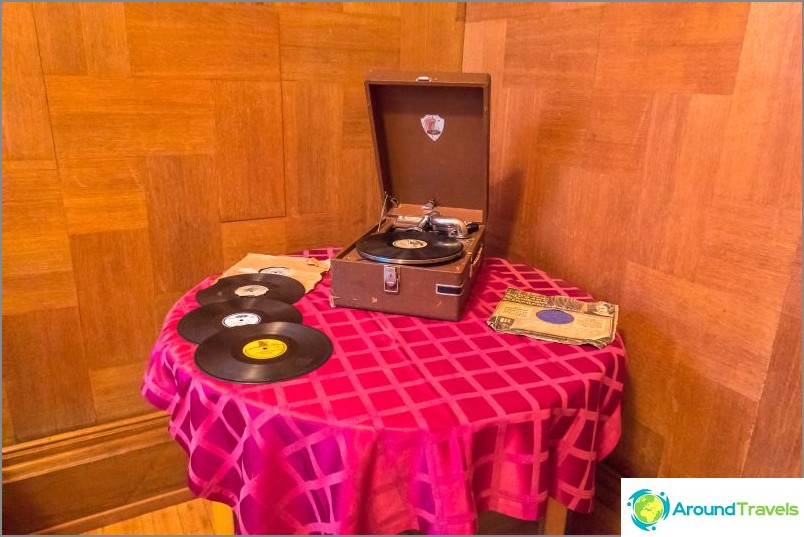 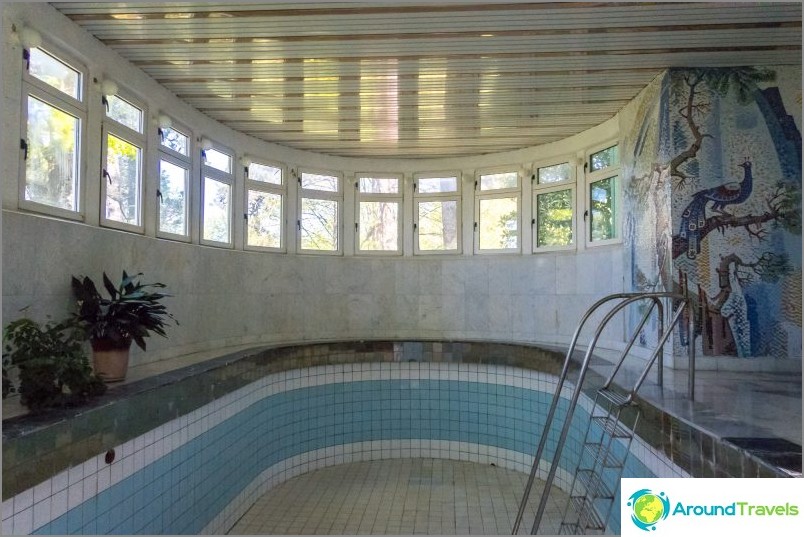 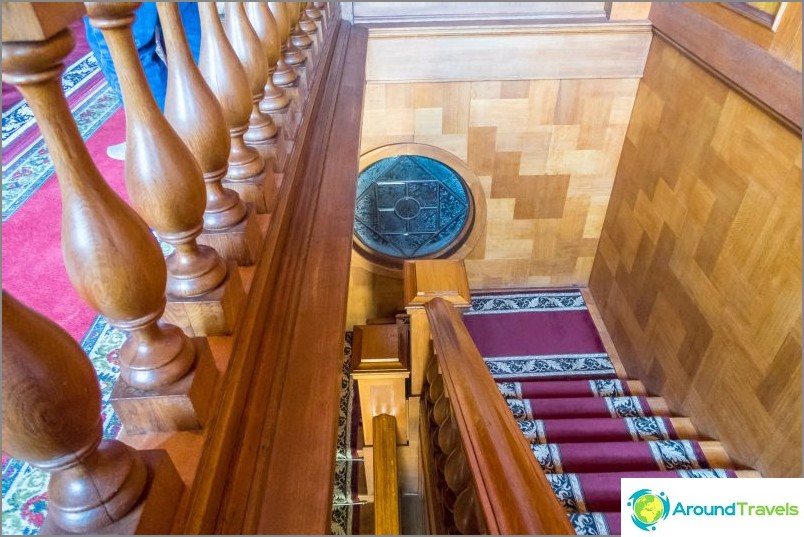 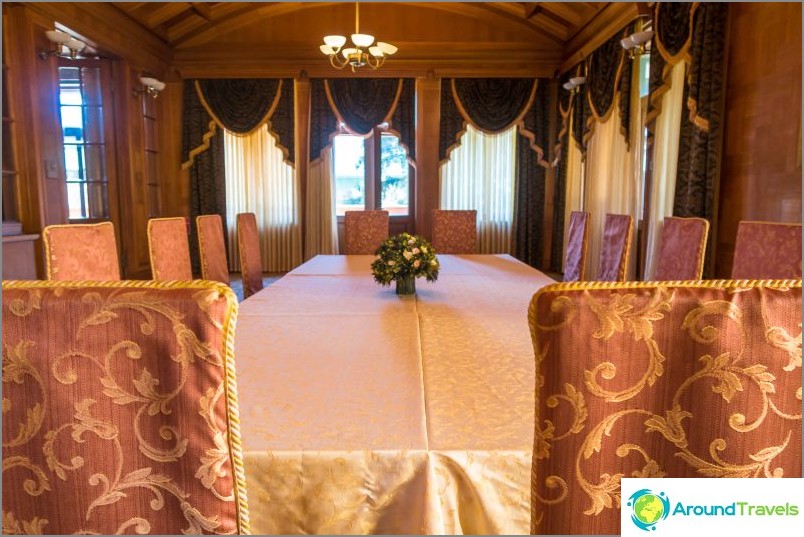 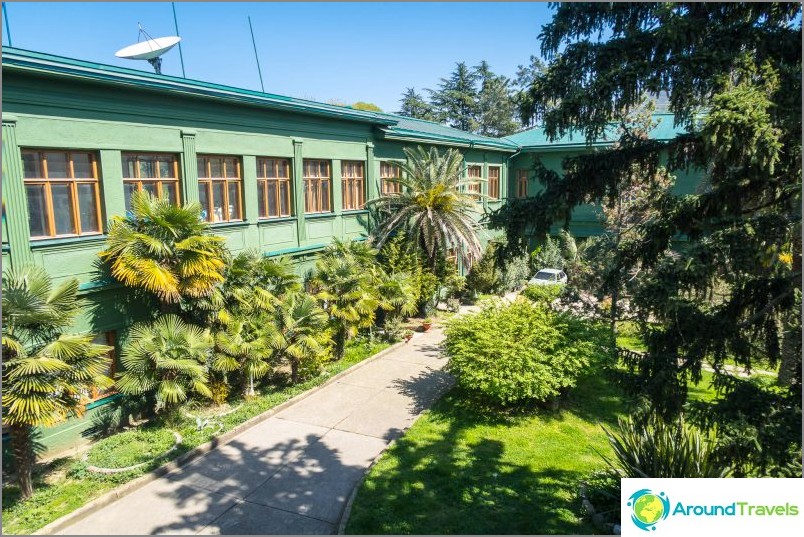 Before the revolution, there was the Mikhailovsky estate here,owned by a gold miner with a difficult last name (but not Mikhailov), who built it for his wife. After the revolution, the estate was taken over by the state, and by the thirties it had fallen into complete desolation. The cottage was already built in 1935-1937 according to the project of Stalin’s personal architect, and the modern version is very different from what was originally intended, but the guide will tell you all these details.

Entrance through the gates of the sanatorium Green Grove, go straight ahead, despite the sign "entrance strictly by pass."

The cost of entry is 300 rubles per person.

Open daily from 9 to 17 hours, guided tours are held hourly.

There is a lot of parking space right next to the cottage, but it is better to arrive early in the morning during the peak season. And not hot, and the car will be a place.

It takes about five minutes to get to the car from the sanatorium gate. People also walk on foot, but 1.5 km uphill is not fun for everyone.

Stalin's dacha
There are few historical exhibits in the building, but the building itself is interesting. Located on the territory of the sanatorium Green Grove. Visit only with a guided tour.
Read more

There are few historical exhibits in the building, but the building itself is interesting. Located on the territory of the sanatorium Green Grove. Visit only with a guided tour. Read more

Shopping center Moremoll in Sochi - where to go ...