East Riley (or Rail) is "technical"the beach on the same peninsula. Although, I even get lost which of the words to take in quotes - "technical" or "beach". In essence, this is just an embankment, a concrete footpath, laid along the coast, along the sea.

In places, artificial stone was created for it.embankments, and in part - fuck up the coast with cement, strengthening natural embankments. The main purpose of East Railay is to serve as a pier. Passenger and cargo boats with Ao Nam Mao, Krabi town, and from here they float somewhere else to other Raleigh beaches.

If you set yourself this goal, then you can walk the entire concrete path from edge to edge in about 30 minutes. And, practically along the entire length of concrete, you will observe a stony, shallow bottom overgrown with mangroves.

Mangrove roots trash debris, which is whyat low tide, dull landscapes appear - plastic, foam, bags, boards, flooded boats. Only the most drunk or reckless comrade can swim here, and most likely, only at high tide.

In fairness it should be noted that there is a small beach on this shore, it is located at the end farthest from Phang Nang, on the territory of the Railai Great View Resort & Spa

Both the beach and the bottom are covered with large stones.and coarse sand. At high tide, the beach is completely hidden under water, and at low tide you can sunbathe and swim relatively comfortably, preferably in swimming shoes.

Believe me, you do not want to go into the water here. Depth, to the eye, to the knee at low tide and shoulders at high tide, but most of the beach lies opposite the mangroves or rocks. There is only one section where you can go down to the sea and sit on the beach, which is more or less like a beach - the place is marked on the map at the end of the post.

Shade creates riparian dense vegetation andhigh mountains, among which the resort is hidden. There is no question about any lounge chairs, umbrellas and other attributes of a beach holiday - there is nowhere to put them and there is nothing.

In the presence of Phra Nanga and West Raleigh, on this rocky beach is simply no reason to be. Therefore, the main visitors here are boatmen, who have their own small jetty, and security at a smoke station. 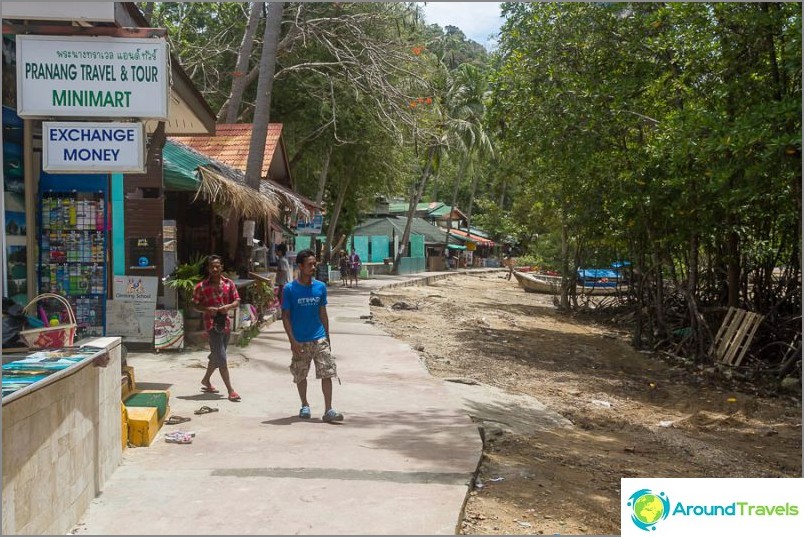 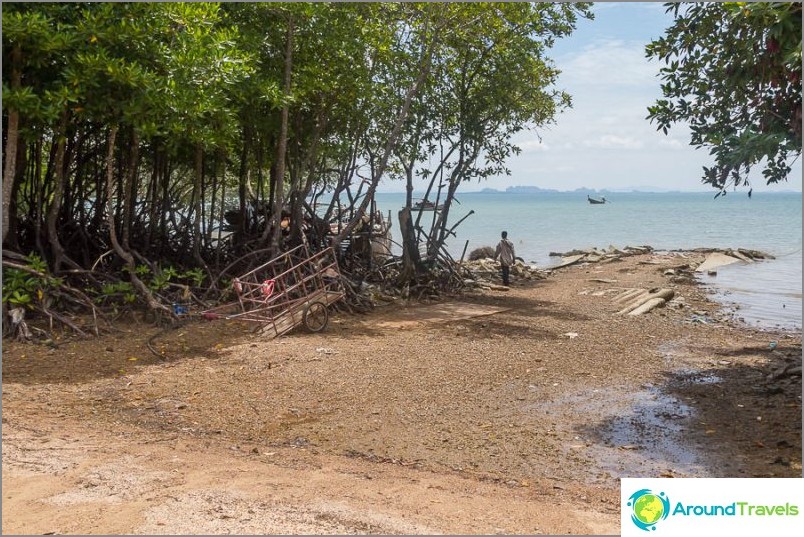 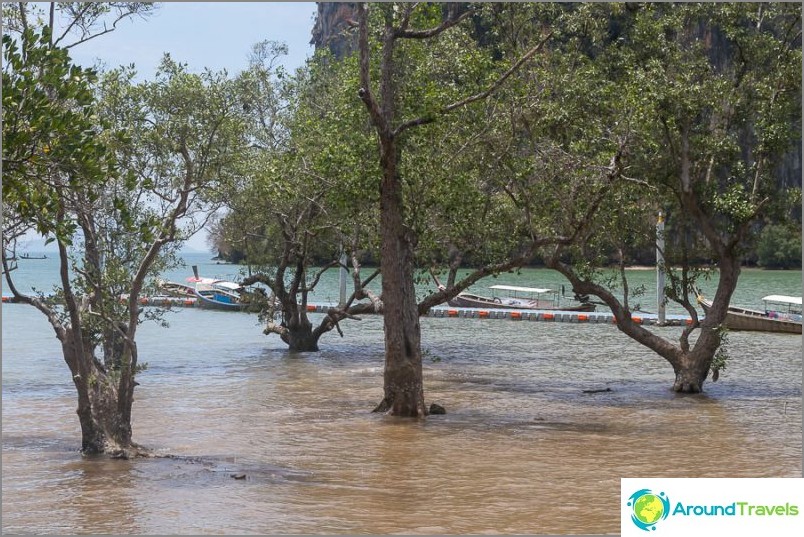 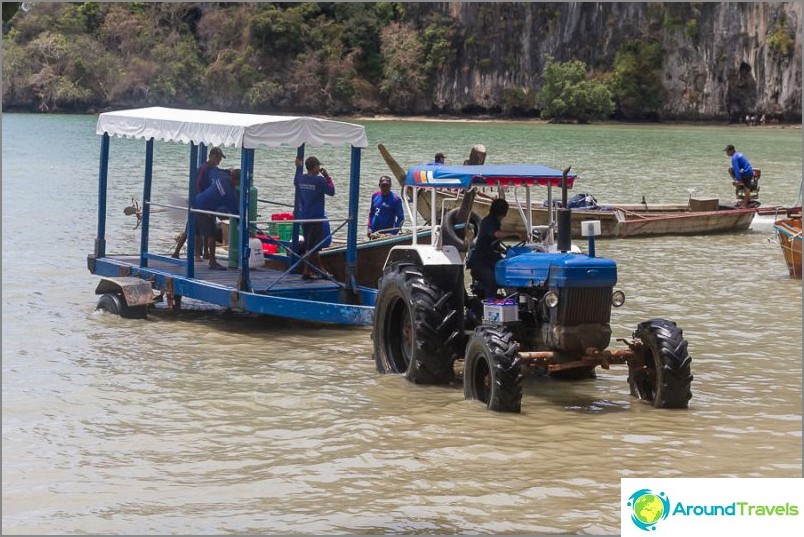 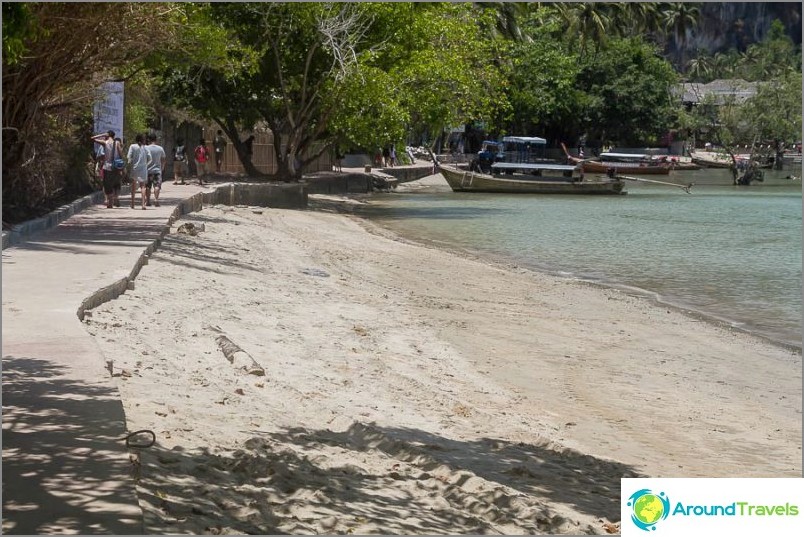 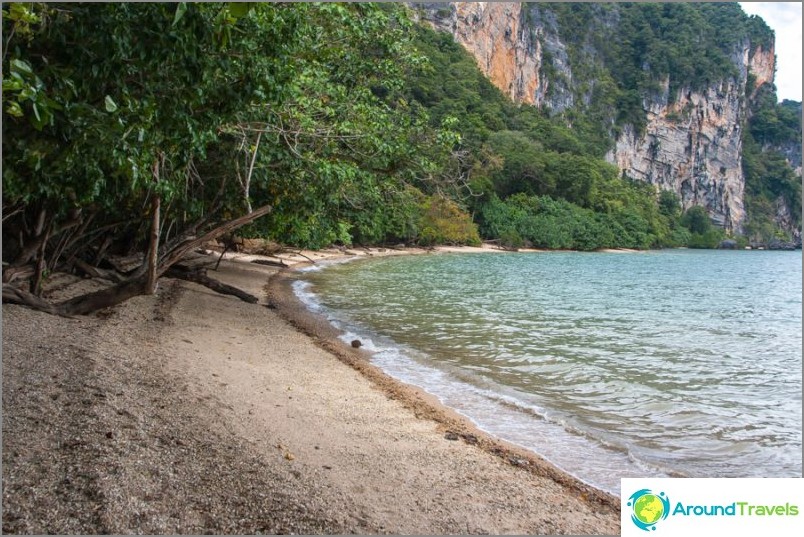 Also, all tourists who want to get to Phra Nang pass through the concrete path, because there is no direct route through the territory of the hotels.

East Riley, though uncompetitive, but preciselyhere is concentrated the bulk of hotels, both budget and not so. And if it doesn’t interfere with walking to the beach for 10-20 minutes, then the location is quite good, in one direction you go - you will come to Riley, in the other direction - to Pranang.

Top rated hotels on the beach, this is a three star Avatar Railay

which has a great area, accommodation in nice houses and a rather large swimming pool, which is a big plus on this beach.

. Not a budget option, but there is excellent service, nice clean rooms, well-kept area and a spacious swimming pool. Railay Princess Resort & Spa

It is less expensive than the previous one, but the service and the rest is also at a high level. Approximately similar to him in terms of price quality nice green hotel with spacious rooms Sunrise Tropical Resort

Similar to the rest of the beaches of the peninsula, East Riley is accessible by boat from anywhere in the resort of Krabi - Aonang, Nopparat Tara and Ao Nimmao. Some brave people make their way to the same beach in the resort, walking on stones along the coast during low tide, thereby saving on one way ticket.

From West Riley, Ton Sai and Phra Nang can be reached in 10-20 minutes, following the signs. In fact, there is only one road that connects all four beaches of the Raleigh peninsula. It's hard to get lost) 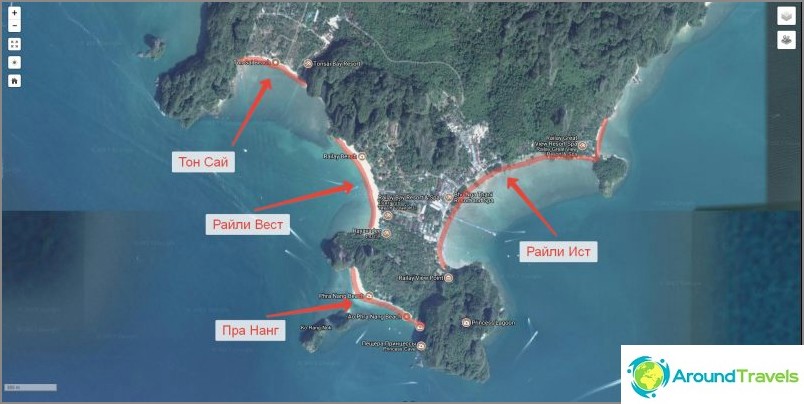 Phranang Cave Beach is the best ...