Television Tower in Prague - the futuristic pride of the Czech Republic

One of the sights of Prague -the television tower, which I call the tivi tower, because the Czech version of pronunciation (Zizkov something there) has not yet taken root. Looking ahead, I immediately recommend this area to you to stay in case you are not happy with the tourist center of Prague. This area is quite comfortable, quiet, calm, and prices in cafes and restaurants below. But getting out is not so difficult. To the same Old Town Square only 10 minutes by tram. Metro in the area too. And now back to the TV tower in Prague.

For all its strangeness, the tower is the bestA city viewpoint, from where you can comfortably and view the camera in all parts of Prague. 360 degree view. Although it should be noted that the central part of this is far away and the main sights will be known only through silhouettes.

Not the most popular attraction,so there are no crowds and that's great. Telescopes and hanging chairs in the style of "People in Black" are installed on the viewing platform, which, together with a small number of visitors, makes the viewing room a very cozy and interesting place to visit.

I traditionally came before sunset to makeat a time photos of day and night Prague. So with the night photos there is a problem: the light of the internal illumination (blue and red) is reflected in the glasses and you can see everything in the photo. Plus the glass is unclear and dirty. But during the day it does not really bother. 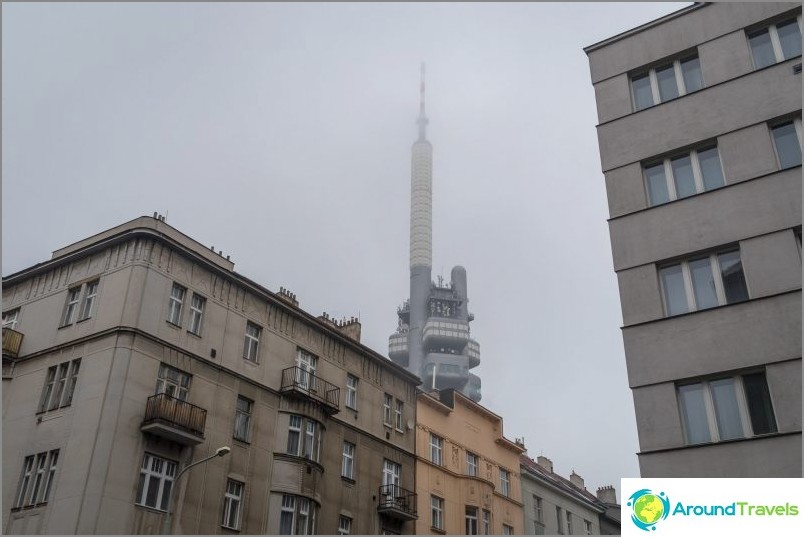 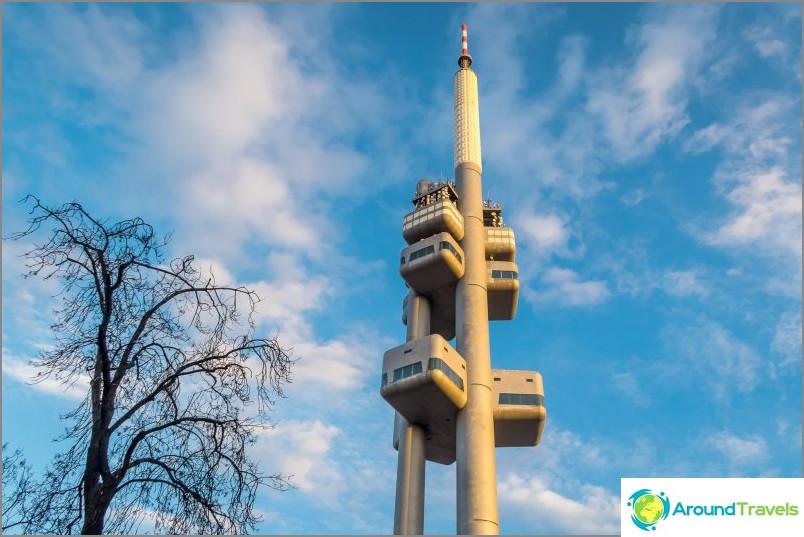 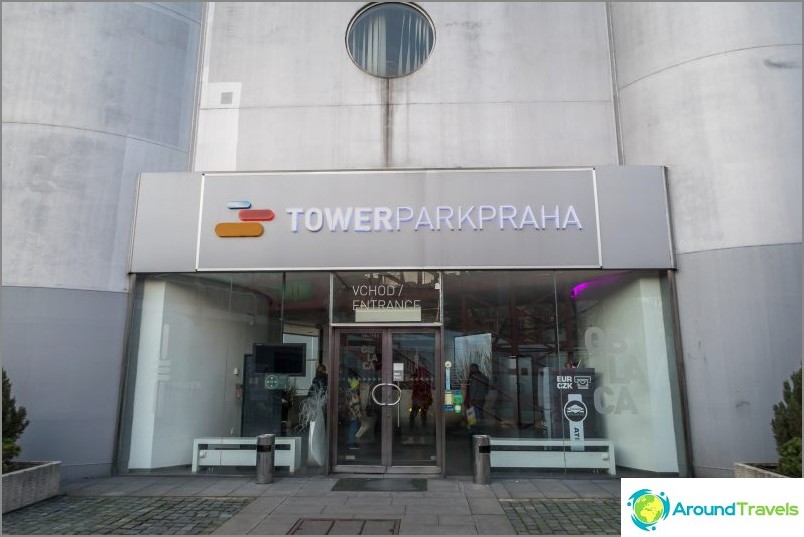 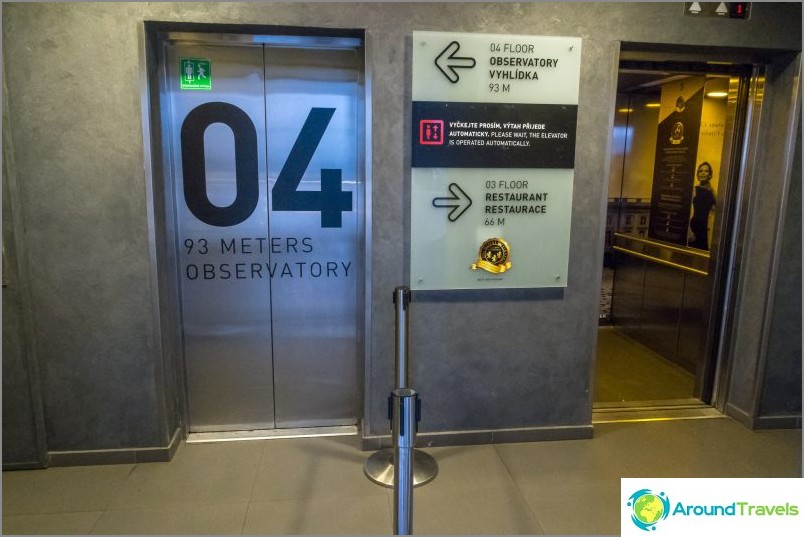 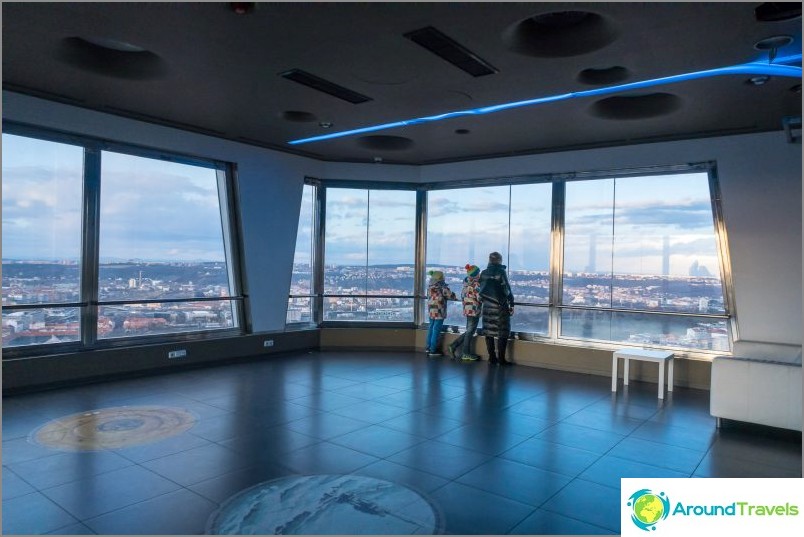 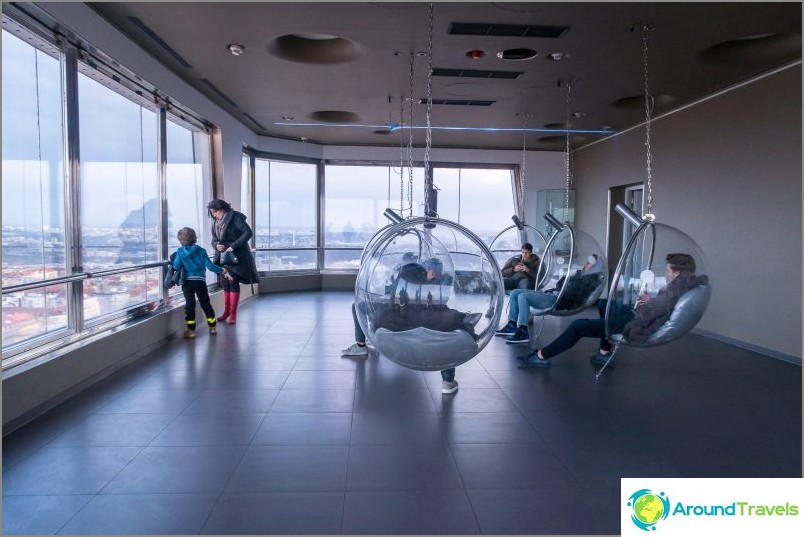 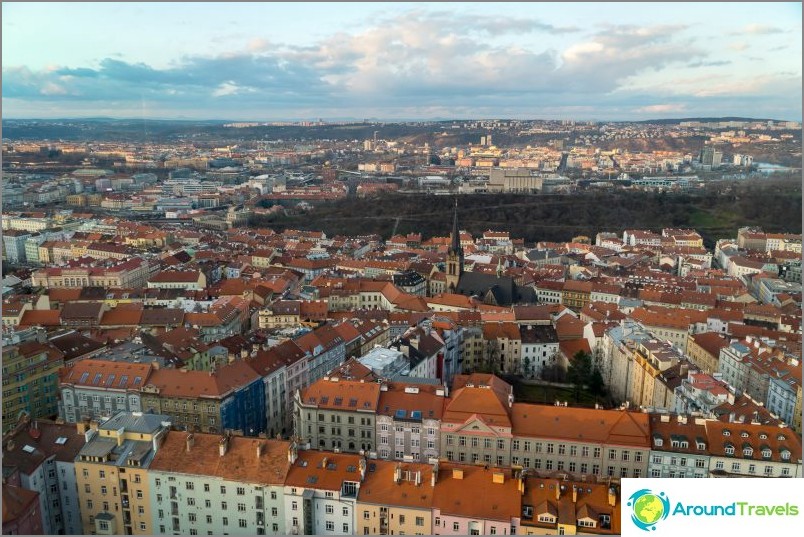 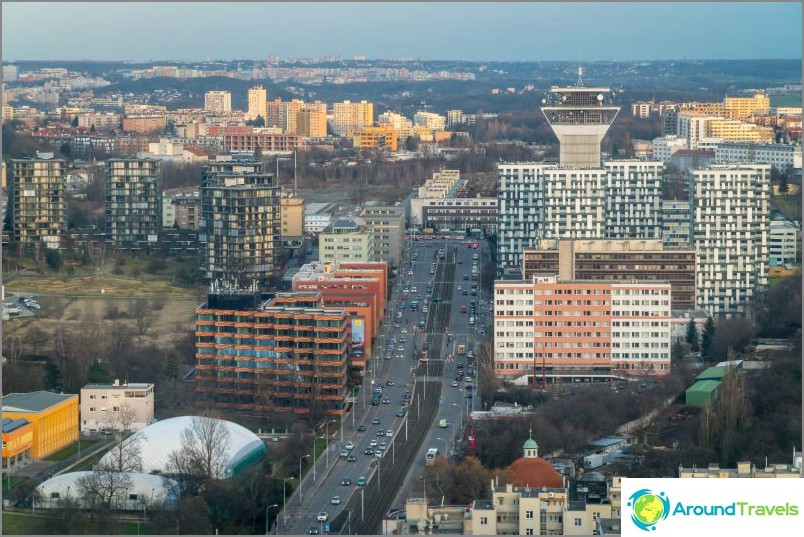 If there is no haze and clouds, you can see far. 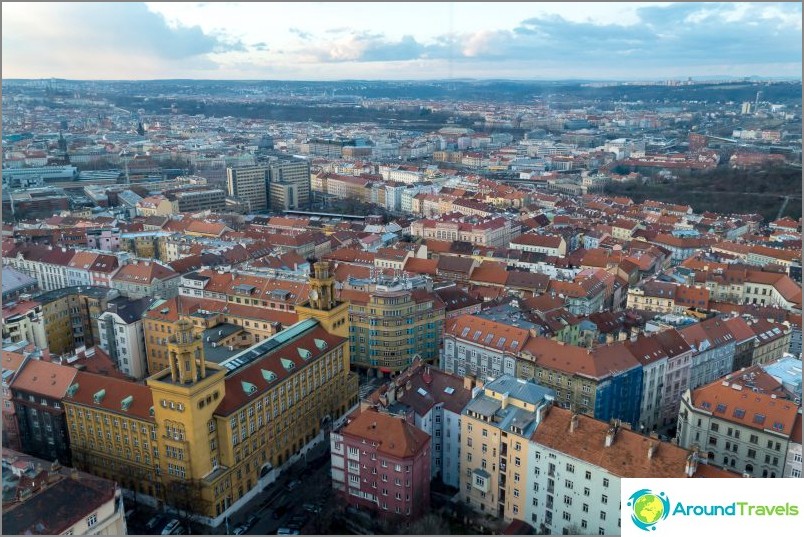 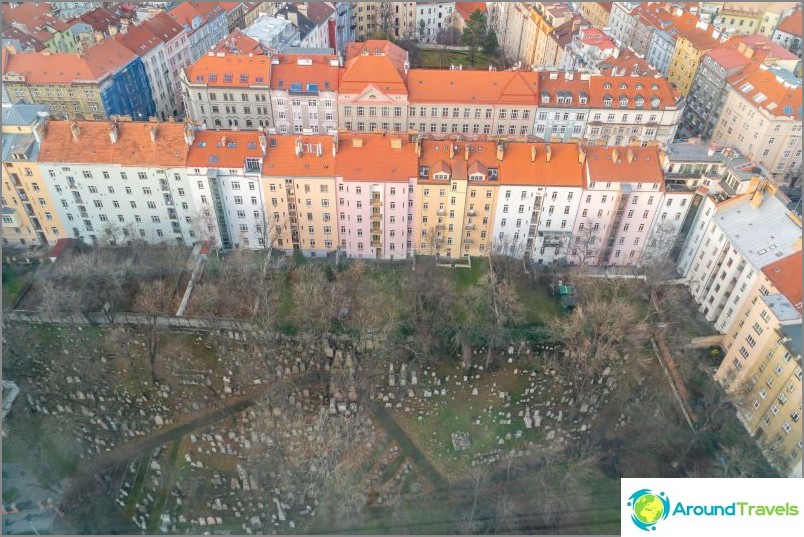 And down at the foot of the cemetery 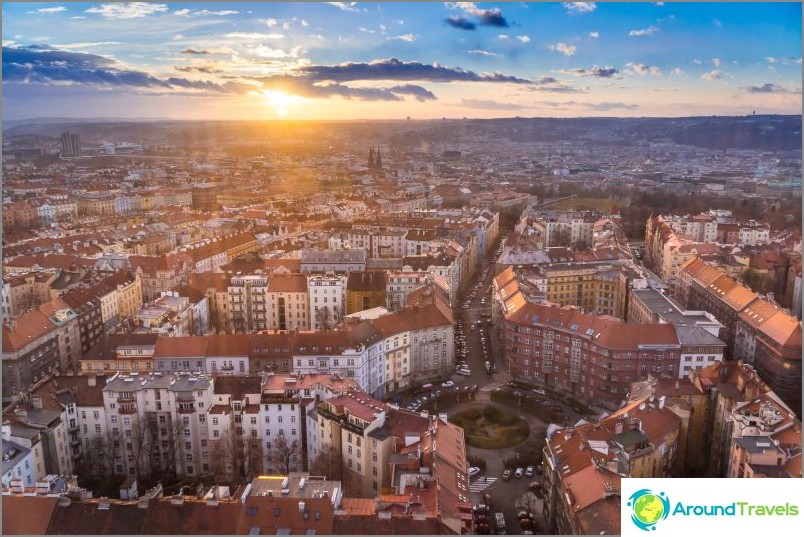 Prague at sunset from the Zizkov television tower 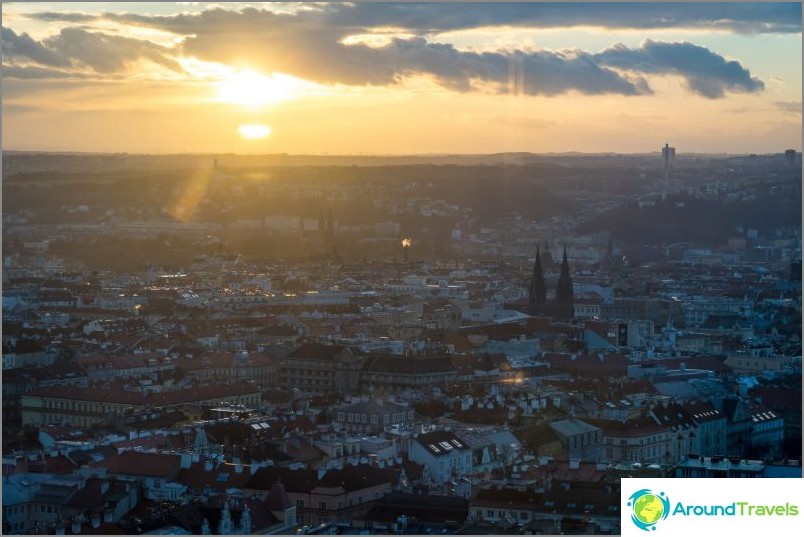 Views of sunset Prague from the TV tower 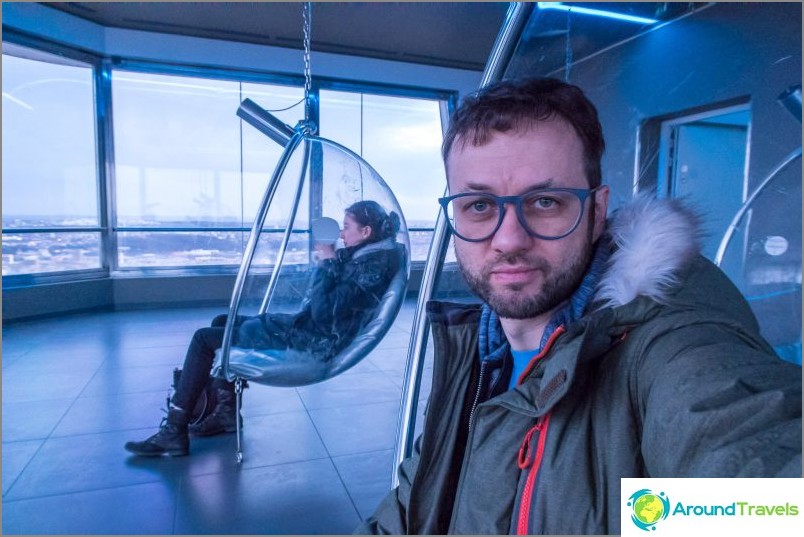 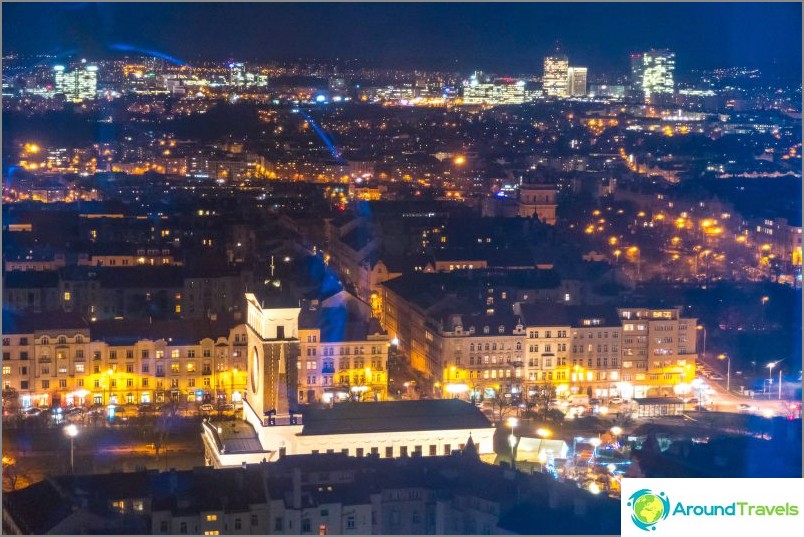 Night shots are difficult to do, reflected lighting room viewing 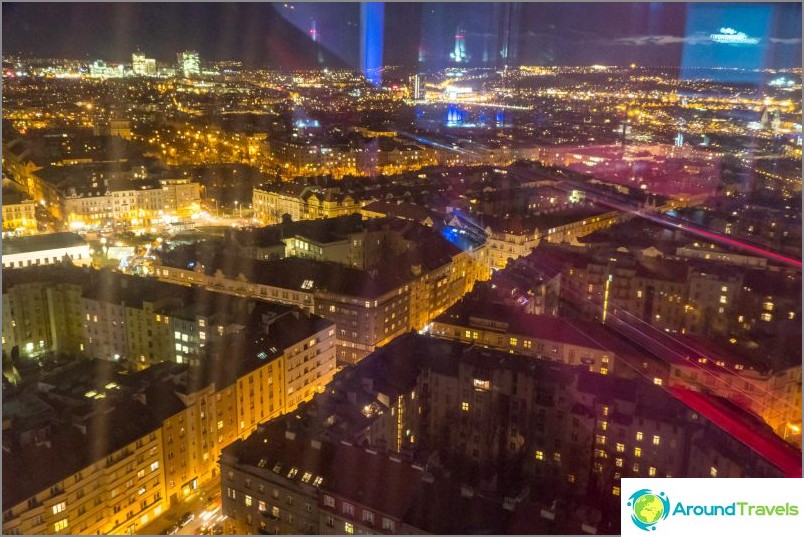 In the evening, the tower outside begins to shine "with all the colors of the rainbow" - lights are lit type of Czech flag. If with clouds in the sky, it looks like “fire”. As if in a science fiction movie.

At the top of the tower there is a restaurant "Clouds" and your place.(i.e. window size) will depend on the amount of the order. The drinks (bar) have smaller windows and look worse. A full meal will have a growth window and a great panoramic view. On the day of my arrival (Friday) in the afternoon, there were no places in the restaurant. They said that it was necessary to book in advance. Consider this moment. Therefore, I limited myself to a viewing platform. But according to reviews the restaurant is expensive, and the quality is average. So I was not upset.

The restaurant downstairs on the ground "Mimino" is also no ice on the reviews. So it is better to come here only to the observation platform. 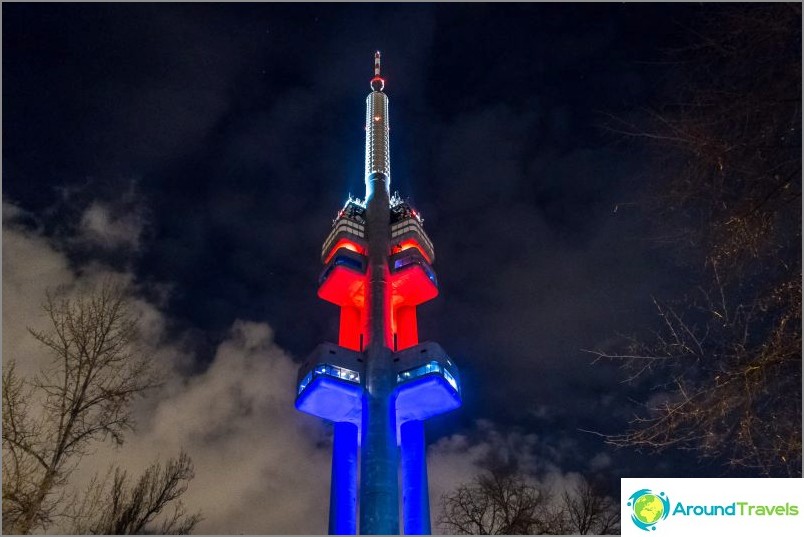 Zizkov Television Tower in Prague - flag of the Czech Republic

Zizkov TV Tower is considered the highestbuilding in Prague, in particular in the whole of the Czech Republic - globally. It was designed in 1985 - it was from there that this “unprecedented” futuristicism of the social realism epoch came to us, which was already realized in 1992. And against the backdrop of a beautiful city, this tower does not look from the word “in general”.

In 2000, as an experiment and for"Decorations" of the tower, placed on it ten sculptures of crawling, faceless, black babies. On all the main resources dedicated to Prague, you can see in the photo exactly the tower with babies. And in my pictures they are no longer there - removed in 2017 for reconstruction and were no longer returned. The tower is already not one of the most wonderful buildings, but these babies are just like fragments of the horror game “Silent Hill”, although I probably would have liked it.

By the way, the building is occupied by some toprating among ugly buildings of the world, which somehow inexplicably made it the pride of the Czech Republic (but this is not accurate). The height is 260 meters and the tower can be seen from almost all districts of Prague. There is even such a joke that the best views of Prague are from the Zizkov Tower because the Zizkov Tower is not visible from it.

The restaurant is located on the 66th floor, an overview - at 93. The height of the entire tower is 260 meters.

There is a hotel One Room Hotel, but it has only 1 number. Actually, that's why it is called that. It is expensive, about 600 euros.

You can get on the subway, go to the station Jirihoz Podebrad. Or before the tram stop with the same name on trams 11 and 13. Or, alternatively, trams 26, 5 and 9 from the Lipanska stop. Well, or a taxi.

Below the menu of the restaurant Clouds, it can be viewed below at the ticket office. You can ask the price. 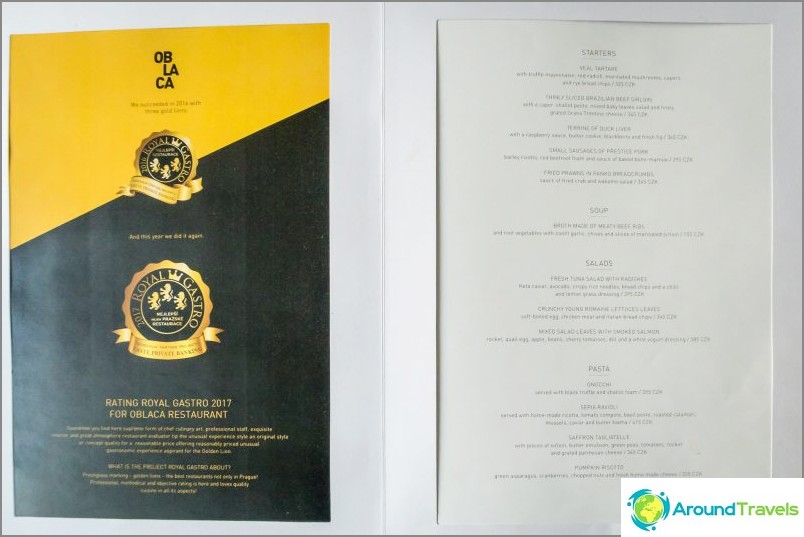 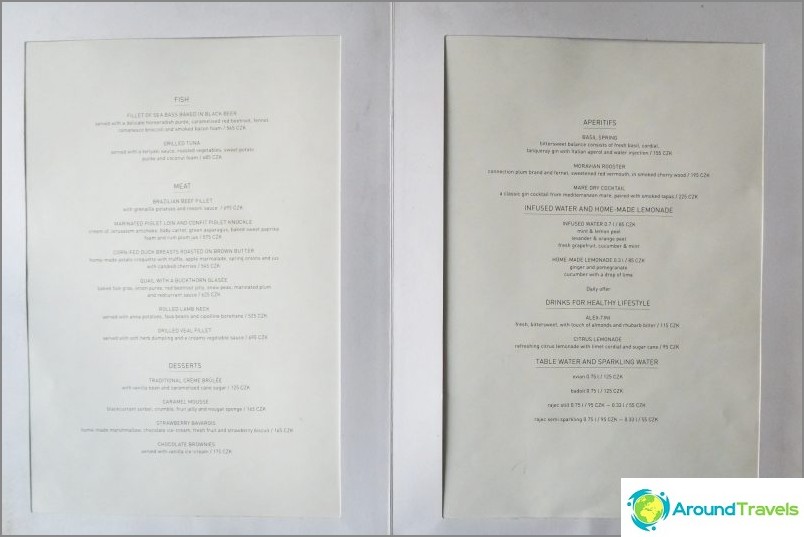 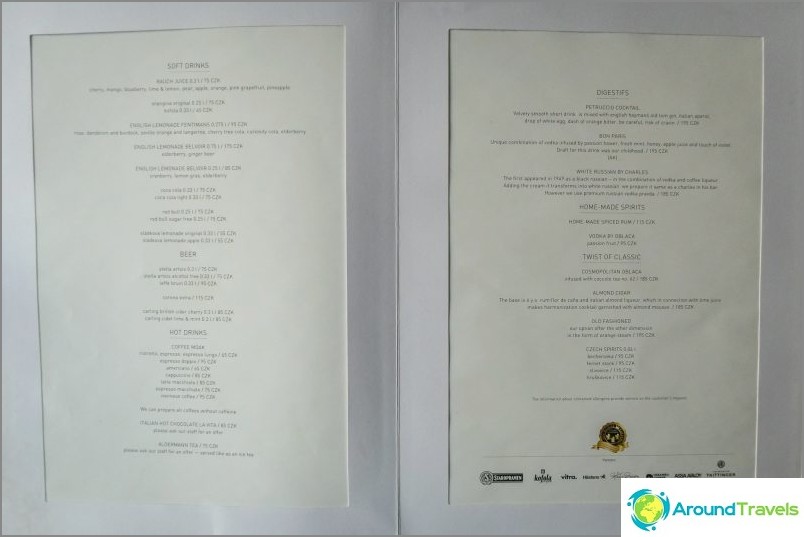 Zizkov TV Tower
Operating television tower with a viewing platform on the 93rd floor. The best views.
More about the TV tower. 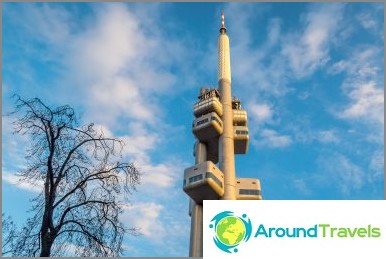 Operating television tower with a viewing platform on the 93rd floor. The best views. Read more about the TV tower.

Apple Technology Museum in Prague - only ...