Altai Mountains - a tourist trip to the Maashei glacier. Part 1.

On Altai! To the mountains! I have been waiting for this trip for 3 years. All the time something did not work out and did not work. And finally, in August 2009, we flew away. A few months before, the company was sharply found for a tourist trip, conductor, money appeared. Even my good, but very busy friend, suddenly turned out to fly with us. We have planned a hike, from the village of Aktash, to the Maashei glacier (locals call Mazhoi) and back. Easy such a hiking trip in
Altai Mountains.

It all started with preparation. We had to buy equipment, which we did not have before: trekking sticks, a burner, gaiters. With the purchase of tickets, we slightly protupili, it was necessary to order them earlier, for six months it is desirable (I advise you to use Aviasales.ru and Skyscanner.ru to search and compare prices). And already 2 months before the departure, there were no cheap fares and it was decided to fly to Barnaul by plane, and go back by train. Separately, I wrote about how to get to Altai.

The most unpleasant in preparation is drying the cheese. The stench was all over the apartment, and the dinner table had been busy the whole time. The backpack eventually came out around 30kg, my wife’s 17kg, which is probably a bit for a touring guru, but I would like it easier, but just as I didn’t try to reduce it, it didn’t work out, things like everything needed ... Altai! 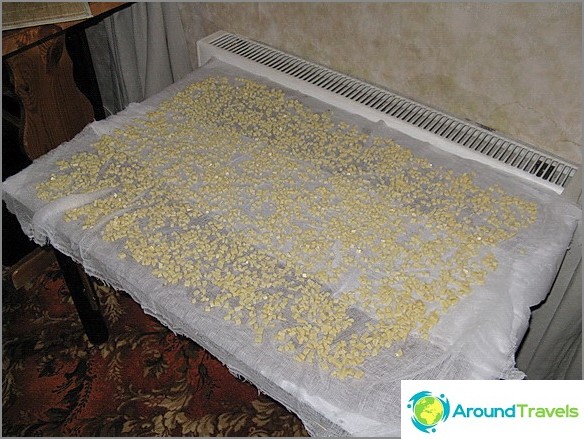 Drying cheese before a camping trip.

And here we are on the plane. To Barnaul fly 4 hours. Leshka, who is a good but busy friend, gets foolish questions: “why are we shaking,” “are we falling instead of”. This is his first flight, you can understand. And the airport of Barnaul met us on a sunny morning. It was not possible to sleep - the anticipation from the tourist trip interfered, and the night was short: they flew out late in the evening, plus a time shift (the time difference was 3 hours from Moscow time). The airport in Barnaul is small, from the plane with a pawn to the gate in a metal fence enclosing the take-off field, and we get to the parking lot, and right next to it there is a pavilion with a hall for those who have flown in. to the head. By the way, you can not wrap backpacks with a film, only we of all the arriving tourists did it.

We boarded the bus and in half an hour we reached Barnaul,for funny 10p, although taxis and some private minibuses were ready to carry us only for a very large amount. Barnaul turned out to be a low, not densely built-up city, quite green and pretty. The bus station is another matter, not at all a pleasant place, the homeless is more than at the Kazan station. The bus station and the railway station opposite each other, those who come by train, it is convenient to transfer to the buses. Then we took a bus to Gorno-Altaisk, buses run frequently, about once an hour. Ride about 5 hours, with a stop in the city of Biysk. In Gorno-Altaisk, we waited for the second part of the group, which traveled through Novosibirsk. Oh, how we remembered them, sitting a few hours at the bus station! But they ate more than once delicious ice cream sold nearby (I advise everyone). After, we took a minibus to Aktash. At last, the plains were replaced by mountains, which, as they moved away from Gorno-Altaisk, grew higher and higher, and the vegetation became poorer and poorer. The road took hours 5-6, and, despite the beautiful views, rather tired. We arrived already in complete darkness, and a conductor, our friend from Moscow, who had been wandering in the Altai Mountains for several weeks, was already waiting for us on the spot.

About how best to go to Altai, you can read here: Mountain Altai. What is the best way to get there?

Under the bright light of the moon, we hacked somewhere inaway from the road, looking for a place for the tent. We got up near the Chuya River, not far from the unfinished hydroelectric power station, about a kilometer-3 highway. The water in the river seemed terribly cold. Then we still did not know that on the way back, at the end of the hiking trip, after swimming in the lake near the glacier, it would be like a hot bath for us. Habit is a new thing.

The next day, almost everyone got out of the tent withwith the words: “Wow!” So ​​here they are, the mountains of Altai! The mountain river, around the rock, on the horizon a mountain covered with ice, all this made a tremendous impression. But the breakfast was meager, as the food is painted by day. Now, instead of plentiful food - the aesthetics of places, but this is a completely equal exchange. 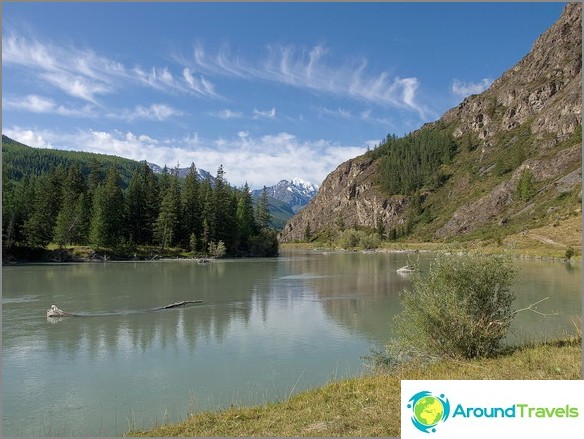 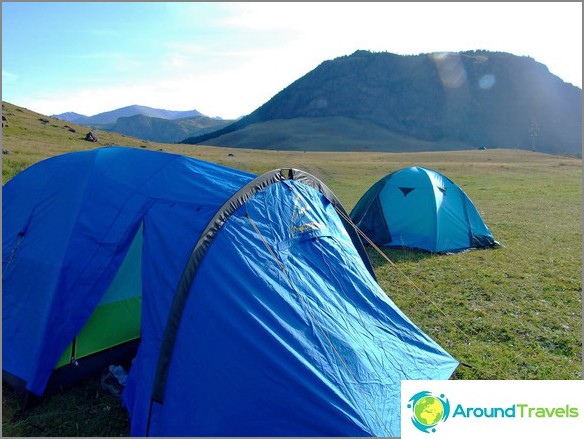 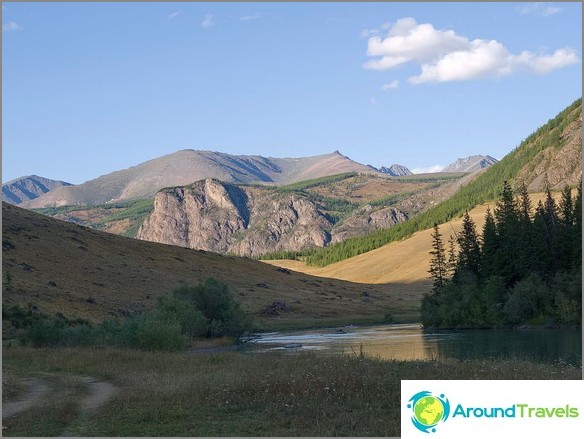 Moved, decided to go for half a day. The route was not long and simple, for the first hiking trip to the mountains completely. Slightly climbed higher and all at once behind the cameras pulled, quickly capture the views of the mountains of Altai. Only here the sun is high, not the best time to shoot. 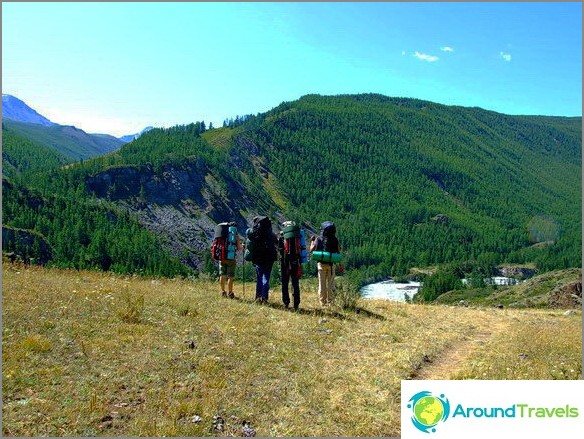 How I regretted that we did not take a DSLR withby themselves, the weight was saved ... It would be better to not take any clothes. Why do you need a normal camera, if you do not take it with you, to the place where you really need it. Only thanks to our guide, wise by experience, who was not lazy and took a whole photo backpack, we brought home a few dozen good photos.

On the first day we walked along Chewie, it was hot, andwater far below. How everybody wanted to swim ... The snow-covered Moscow bodies ached from such mockery. Once again, you understand, you need to go in for sports, sit at your computer less, get out more often on nature and on hiking trips and understand a lot more. If only all these understandings would live to see the city, and not sink into oblivion. 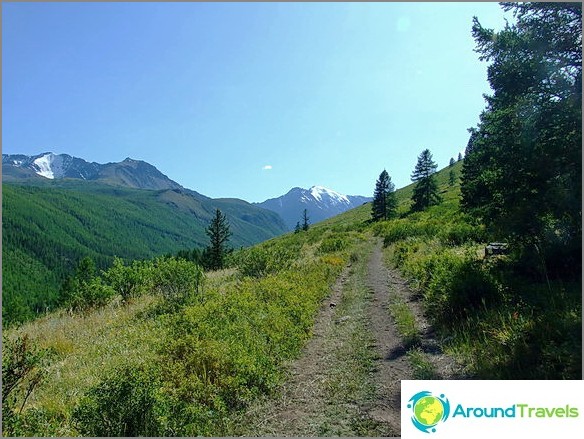 Then we went down and turned towards the Maashea River,the rest of the way let's go along it. There was a large camp at the junction of the rivers, there are many people, horses, UAZ. Our first halt was remembered by cold bluish water and tea drinking. 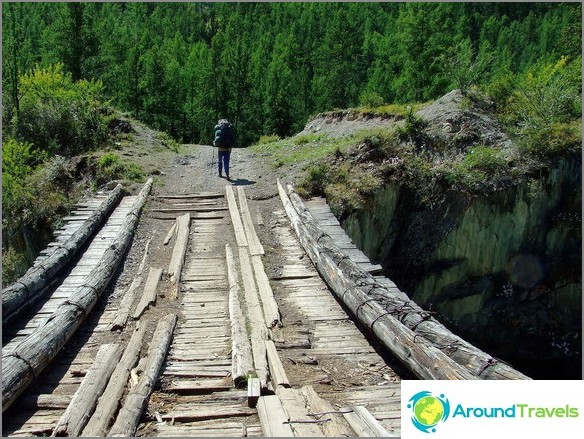 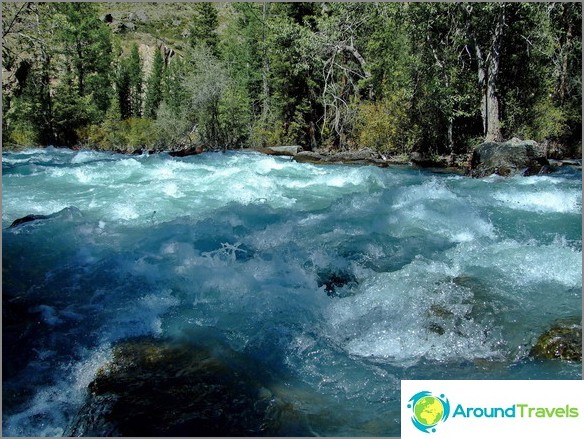 At a slow pace, we walked for several days. Nature was getting harsher and harsher, the temperature was falling. In the morning the tents were in hoarfrost, like everything around. The weather in Altai, in general, plays jokes, then rain, snow, sun, you do not guess. 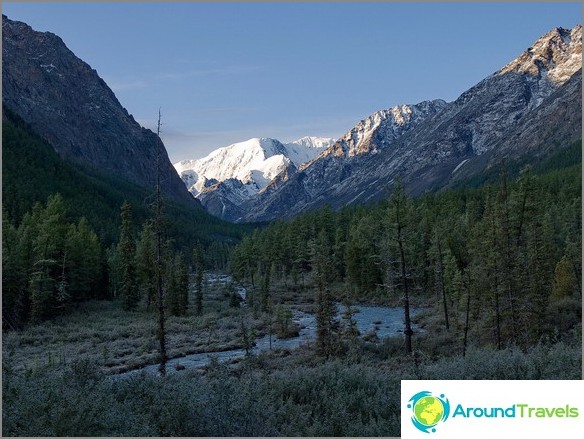 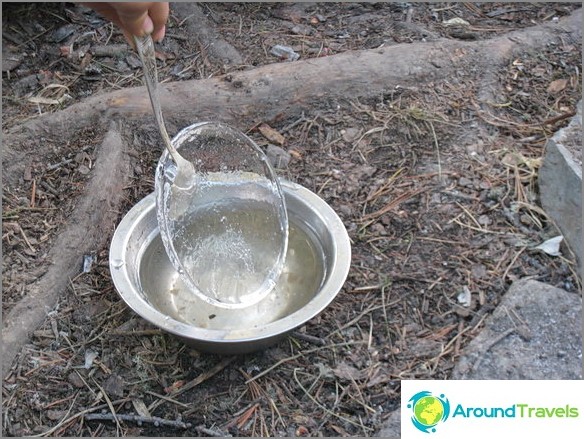 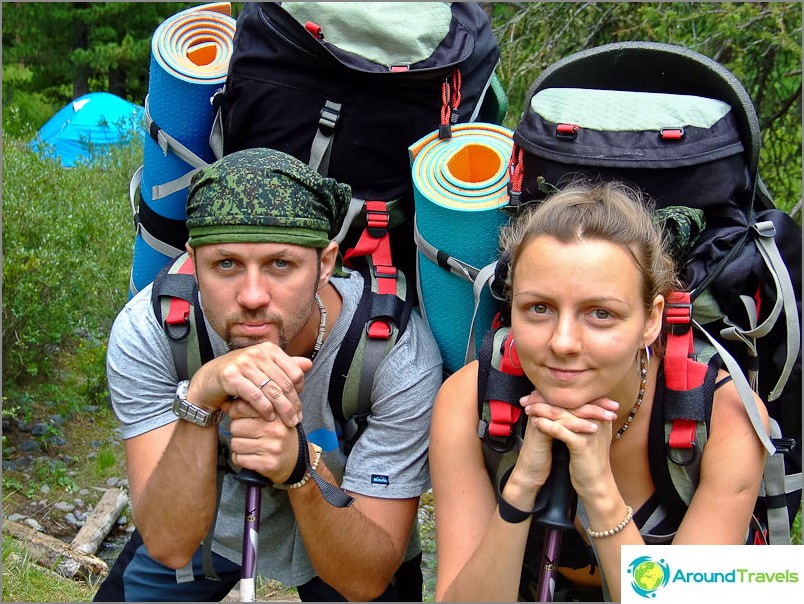 Soon the lake Maashei stretched before us. And the only parking site we strongly hoped for was busy. And we had to some participants of the campaign, completely unload, and practical to carry on to the next stop. The road along the lake was not as picturesque as the lake itself, because it was necessary to look constantly under our feet, jumping from stone to stone. The truth in the parking lot was a surprise for us, a mushroom soup made from local mushrooms. As I recall, immediately drooling flow. 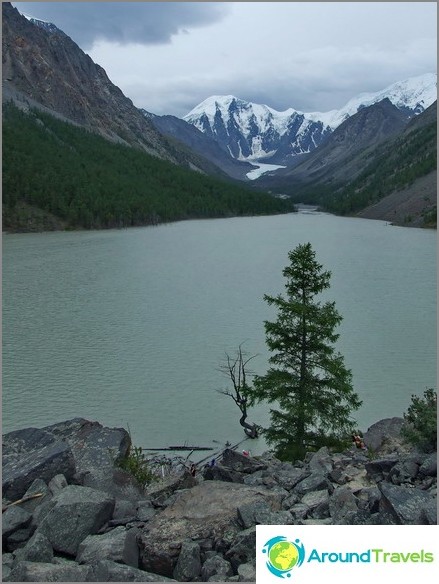 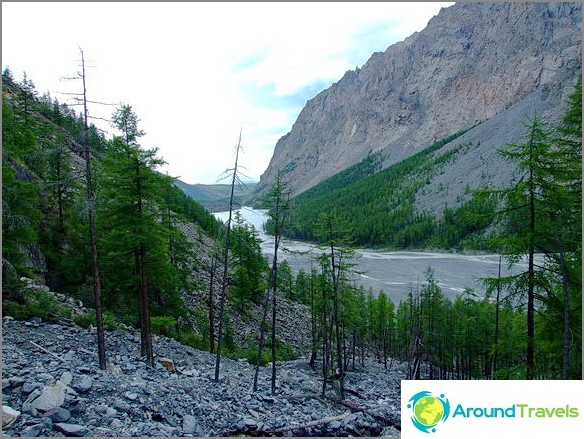 The main goal was the Maashei glacier and on the third dayways we saw him. From afar, but saw. More precisely, it seemed to us that we would reach it the very next day, but the distance in the mountains was somehow deceptive, did not reach. 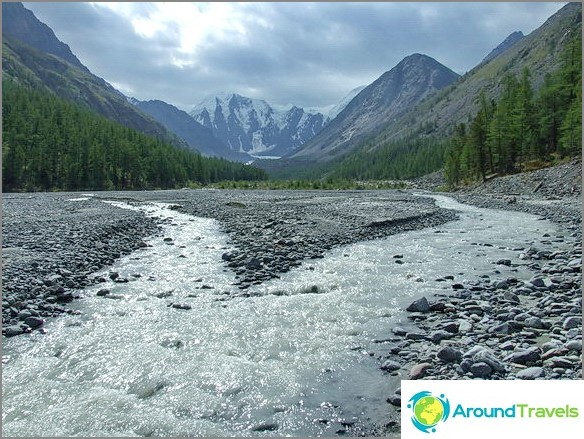