Those who are going to go to Sochi and think aboutchoosing housing, it is useful to know what different areas of this city are and in which area of ​​Sochi it is better to rest. First of all, it is worth noting that the phrase “Big Sochi” (or even just Sochi) means a narrow strip along the sea, about 100 km long. This is almost the entire coastline, from Abkhazia and almost to Tuapse. Mountains do not allow the agglomeration to grow inland, from the sea, so it grows in length. At the same time, the settlements related to Sochi are known by their own names, but still belong administratively to Sochi. Like, for example, Adler, who is also part of Sochi. And this is a large and practically independent area, which includes the village of Krasnaya Polyana.

Areas of Greater Sochi and the map

Officially, there are four districts in Greater Sochi: Lazarevsky, Central, Khostinsky and Adlersky. The city of Sochi is usually called the Central District. This is the smallest area, but the most populated and developed area in terms of tourist infrastructure.

Sochi Airport is located in Adler, from wherethe center of Sochi is about 30 km away, and only 7 km to the border with Abkhazia. Sochi Central Station is connected to the airport by aeroexpress, which also stops at the Adler railway station. An electric train and buses go to Krasnaya Polyana from Adler.

Lazarevsky district - the farthest from the center of Sochiand from the airport. Considered the least convenient in terms of transport accessibility. But the sea here is cleaner than in the center. The Lazarevsky District consists of settlements (in order from west to east): Shepsi, Magri, Vishnevka, Makopse, Sovet-Kvadzhe, Golubaya Dacha, Ashe, Lazarevskoe, Chemitokvadzhe, Zubova Gap, Deep Gap, Golovinka, Anchor Gap, Lower Beranda, Vardane, Lower Hobza, Loo, Lower Uchdere, Cultural Uchdere, Dagomys. If you are looking for where you can stay in Lazarevsky district, see my list of cheap and good rated hotels.

The central region is a historical part.Greater Sochi, that is, the city of Sochi itself. Not all city districts are equally good for recreation. For example, only the residential districts of Mamayka, New Sochi, Central, Svetlana, Jan Fabricius come to the sea. Donskaya, Areda, Zavokzalny, Sobolevka, Maly Ruchey - do not border the sea. And even further from the coast are the residential districts KSM, Hospital town, Makarenko and Vishnevka.

Famous Sochi sights are located on the territory of the Central District: the Winter Theater, the Sea Port, the railway station, the art museum, Park "Riviera. Sochi Arboretum and the residence Bocharov creek (in the neighborhood of New Sochi).

In the Central district of Sochi, the relief is flat and everythingwhat you need for living and recreation is located in close proximity, including the sea. Therefore, we can say that for a holiday with a child is the best area. My list of cheap and well-located hotels and hostels for young people in Central Sochi look here.

Adler district - it consists of microdistrictsThe resort town, Golubye Dali, Central Adler, Cheryomushki, Nizhneimeretinsky Bay (Imeretinsky) and Krasnopolyansky village district (Krasnaya Polyana). It was on the territory of the Adler district that buildings were built for the 2014 Olympics, including the mountainous part (Krasnaya Polyana) and the coastal (Olympic Park in the Imereti Lowland). Here is the airport. Imereti district is now gaining popularity, the reviews about it are mostly good, because the entire infrastructure is new and modern, comfortable for recreation. The area is perfect for families with children, youth recreation, as a large beach club with golden sand has recently opened here, there is a beautiful promenade, convenient for walks, Sochi amusement park, oceanarium, water parks and much more. In Adler it is also beneficial to stop those who come to go skiing, because housing is cheaper than in Krasnaya Polyana, and you can get to the slopes by bus or Lastochka train. From many hotels in Adler there are also regular transfers to the ski slopes and Krasnaya Polyana. About good and affordable housing in the Adler district read in detail here.

Neighborhoods of the Central District of Sochi

Simply put, it’s justdifferent areas, in fact, the city of Sochi. There are a lot of them, but not all are of interest from the point of view of the tourist. In summer, the most popular areas among the guests of Sochi are adjacent to and adjacent to the sea. These are, for example, the Donskaya Street area, the Zavokzalny district, where the Sochi railway station is located, as well as the Makarenko, Zarechny, Mamayka, Novy Sochi, Tsentralny, Svetlana and Jan Fabritius neighborhoods. For me personally, due to a combination of factors in terms of recreation, Central, Zarechny and Svetlana like the most.

The neighborhood is adjacent to the New Sochi, but isfurther from the sea, rising up from the valley. The main street is Donskaya. Along the Don area, the land is flat, but as soon as it is removed from it, several houses go deeper and the mountainside begins. The area is well developed and quite developed in terms of infrastructure. Many shops, there is a market, small cafes. The largest shopping and entertainment center Moremoll and the Yubileiny cinema are also located here. A good option for families with children, the area is quiet. It takes about 5 to 8 minutes by car to the center of Sochi, about 15 minutes to the sea. Also, the beach can be easily reached by shuttle bus. Public transport runs on a schedule and quite often. In this neighborhood are cheap and with a good rating Guest House Sunny and Hotel Bellagio. 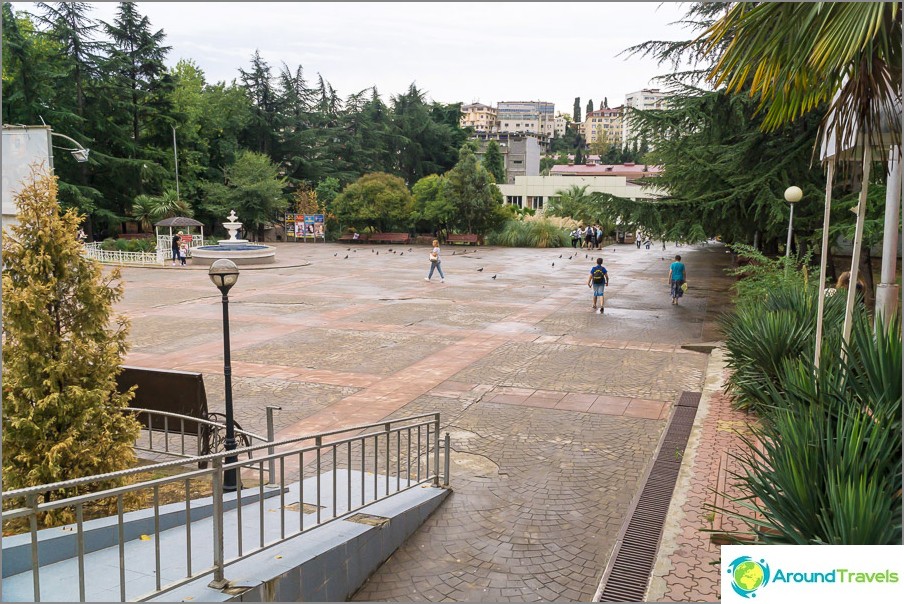 If the distance from the sea for you is not verycritical, it is very convenient for living area of ​​Sochi. Here is an excellent infrastructure - there is everything you need. To the sea, in fact, also close by - several stops on public transport. On foot, if desired, can also be reached. In general, the area is quiet and peaceful, sleeping. The city center is also within walking distance. Building density is low, from here you can reach any part of the city without traffic jams. In Zavokzalnom district, on the border with Central, is a popular hotel among tourists Sochi Denart.

This area is good because it's prettyfew people, compared with Central or Zarechny. It was built in the 70-80s, some buildings still look relatively fresh, the technical condition is good. To the sea and the Center on foot to get far away - 20-30 minutes walk, so for families with children is not the best option. In addition, Maccareno is located mainly on the mountain. Locals prefer to get to the beach by public transport. The infrastructure in the microdistrict is well developed and housing is cheap. Near Makarenko, but in other areas there are two hotels with high ratings: Vishnevka (as the name implies, the hotel is more likely to belong to Vishnevka microdistrict) and Marianna in the hospital town. 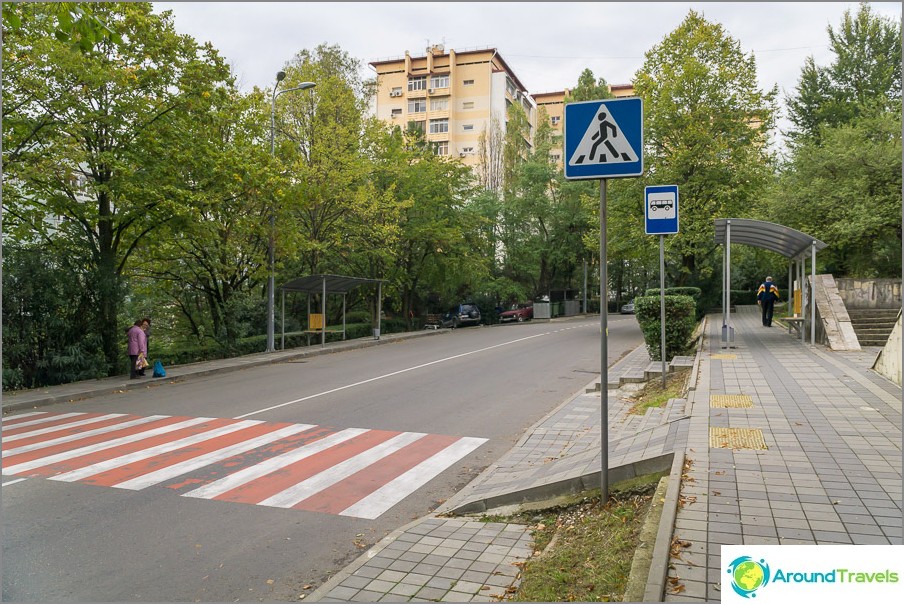 The main streets of this area are Gagarin andRed Army. There is good infrastructure here, relatively close to the sea (much closer than from the same Donskoy), Riviera Park (attractions, retail outlets, cafes) and the free beach of the same name. The entire area permeates the color boulevard, which is great for walking and also near the embankment of the river, which you can also walk on. The area is not mountainous, flat. The building is quite old, a lot of Khrushchev. But mostly quiet, green, close to shops, cafes, the central market and public transport. A good choice for rental housing for both short and long term. If you choose the best area for recreation with a child, then this is just one of the options, because here, among other things, there is a large playground. 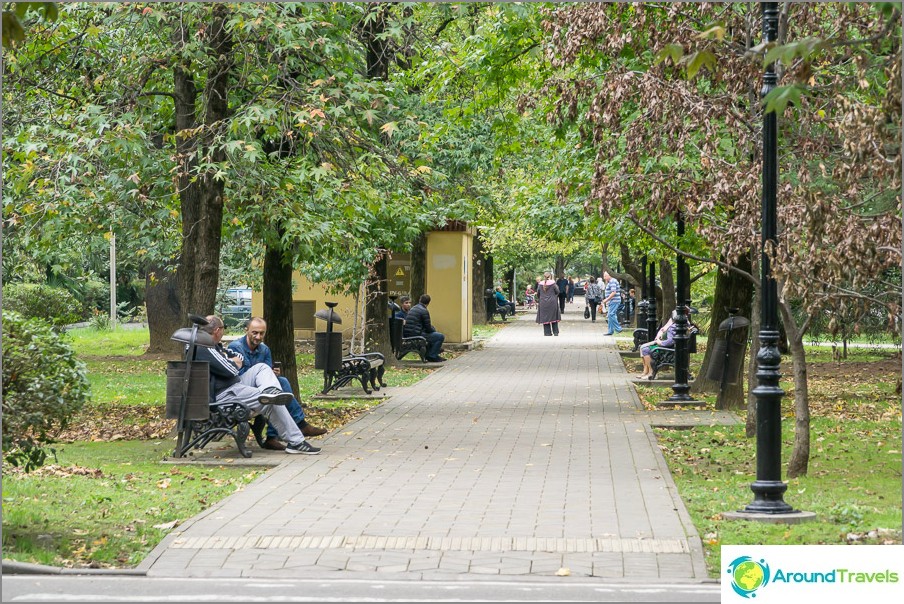 Beaches, well developed resort infrastructure,Magnit hypermarket, relative proximity to the center, where Vinogradnaya street, the new bypass road and the doubler of Kurortny prospect go, all this makes the area very popular both for tourism and for long stays. From Mamayki to the center of Sochi, about 10 minutes drive. If you are on a private car, then staying in this area would be a good choice. Hotel with a good rating in the area - Sleep by the sea.

In the New Sochi there is a private sector and new buildings. But housing in the latter is not the highest quality and the infrastructure is still rather poorly developed. The sea is near, but it is difficult to get to it, because the terrain is hilly. If you are with small children and a stroller, it may not be very comfortable to move around. In this area, it is better to choose housing closer to the Riviera Park. Some distant places in the area can only be reached by car, with many construction projects. But there are also quiet corners, with a good view of the sea. Here is a good free beach "Albatross", many parks. From the center of New Sochi, near. In general, this is quite a popular area with tourists. Close to the sea and the Riviera are expensive hotels with a large territory, the type of overseas beach resorts. But in general there are quite a lot of hotels in this area and most of them are new. One of the top rated hotels is the Green Deck Boutique Hotel with a swimming pool and power on (half board). 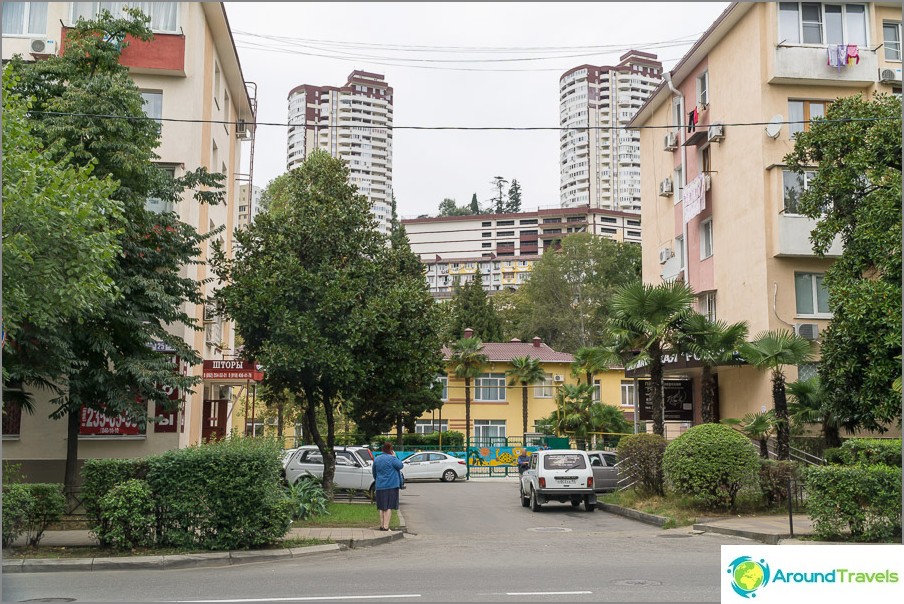 The very center of the city, with a developed touristinfrastructure, attractions, cafes, restaurants and more. Here is the commercial port of Sochi, Navatinskaya Street - a green pedestrian zone where it is pleasant to walk. The sea, of course, is not as clean as on the outskirts, but the very center of life, many of which are large, expensive multi-star hotels, and fairly affordable housing. Minus - a lot of people in a season. The terrain is flat, one of the few flat areas in Sochi. Good transport accessibility to the railway station. This is probably the best area for youth recreation. There are many hotels in this area. One of the best reviews from guests is the international chain Mercure Sochi Center. 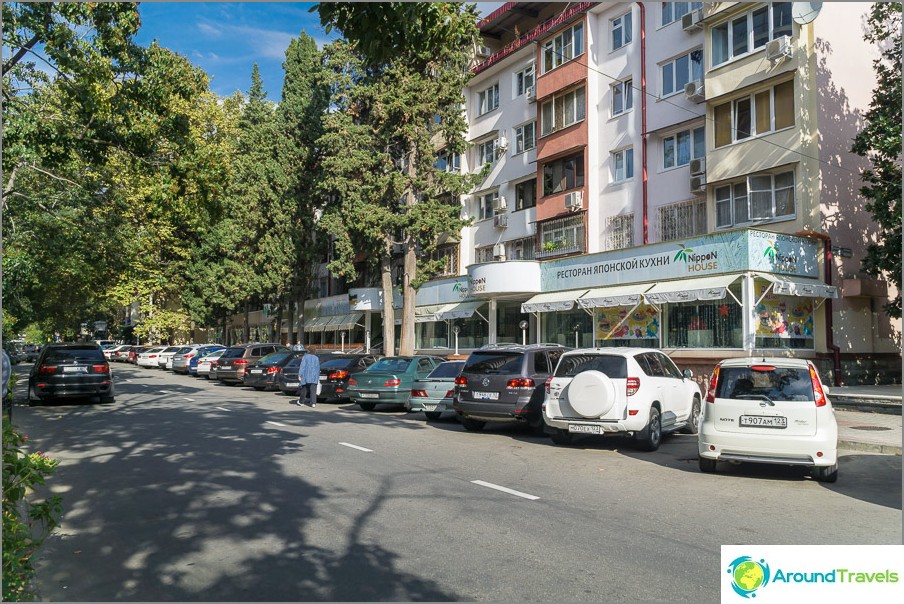 Popular with tourists microdistrict with developedinfrastructure, located close to the city center, in fact, also the center. There are many inexpensive and good cafes for every taste, canteens, public transport stops, shops, including Magnit and Perekrestok. Nearby there are theaters, Arboretum. Close to the sea. True, the nearby beaches are small and belong to different sanatoriums, so many go to the beach Riviera. From the railway station to Svetlana walk about 40 minutes. This is one of the best areas where it is pleasant and convenient to rest. In the area, three minutes from the sea, is located the pension Svetlana with studio rooms, where there is a kitchenette and a washing machine. Convenient for holidays with a child. 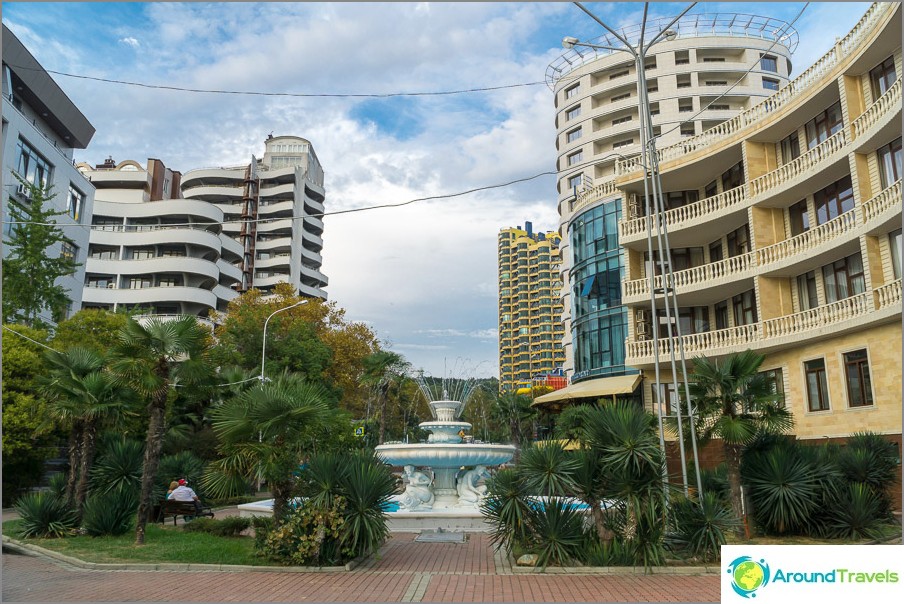 The neighborhood of Jan Fabricius

This is a comfortable, green and quiet neighborhood,located behind the Arboretum. From here to the center of Sochi from here 2-3 minutes drive to the sea, too close. The beaches and the sea are cleaner here than in the center. Many boarding houses, still Soviet, there are also good expensive hotels with a high level of service. There are not so many cafes and shops, as in more central areas, but green, many gardens, recently new business class houses are being built. Of the hotels in this neighborhood is located by the sea and has the highest rated Sanatorium Avangard.

We made a map of Sochi neighborhoods to make it easierto navigate where and what, especially when housing is offered, you can immediately appreciate how far to the sea and the center. But they can write 15 minutes on foot to the sea to go, but in fact the area is much far and you need to run to keep within this time. Map drawn based on © openstreetmap.org 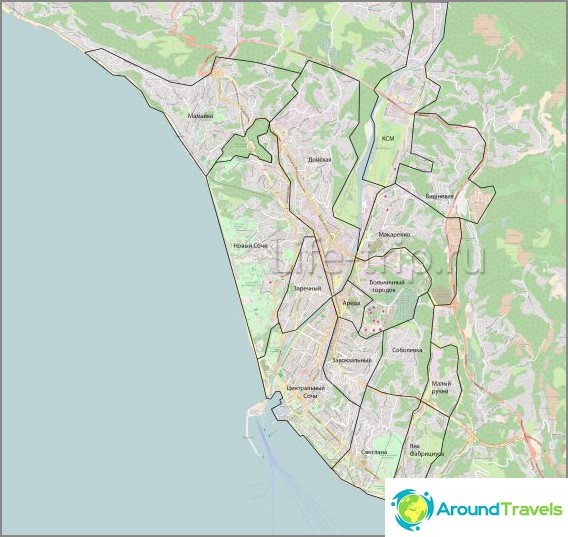 Where better to stay in Adler and cheap ...