Ban Kai Beach is located on the southwest coast of Phangan, between the beaches Ban Tai and Haad Rin Nye. Approximately from the marina to its center, Ban Kai simply continues to repeat Ban Tai, both along the bottom relief and along the infrastructure on the coast: plain, shallow water, and all life is concentrated near the water.

And starting from the center, and further south, Ban Kairuns already along the foot of the mountain, so the strip of sand becomes much narrower, and the bottom becomes more rocky. The beach, in my opinion, is so-so, like Ban Tai. In sunny weather, it looks attractive, in cloudy - not very, and swimming here is not at all interesting.

It is very conditionally possible to say that Ban Kai begins after the marina on the left edge of Ban Tai, and ends in the area of ​​Silvermoon Beach & Jungle Resort

. After which the bank begins to wag along a steep slope and is often interrupted by stone piles, impassable at high tide. In essence, Ban Kai is a continuation of Ban Tai.

Due to its geography, Ao Ban Kai is a kind of champion in the number of stinking rivers. Their mouths are near Pinks Bungalow

, and even during the rainy season it breaks through the crowded reservoir in the Black Moon Party area, washing away the beach no worse than a small river.

In the dry season these creeks can be easily navigated byshore. Despite the shallow water and the absence of strong seas, the coast with coarse yellow sand is prone to blurring and sometimes reinforced with concrete rings, reliably but not aesthetically.

As I wrote above, the right half of the beach andthe center is a shallow water that goes 200 meters to the horizon. At low tide, the bottom is exposed to such an extent that you can ride a bike or play football. Accordingly, swimming here will only happen at the time of the highest point of the tide, twice a day and standing knee-deep in the sea.

The beach can be considered a children's paddling pool, withfairly clean entrance to the water and a flat bottom. After the middle of the beach, to the left, the broken line of the coast soon begins, repeating the base of the mountain. There, the depth remains the same, but you have every chance of finding a sharp drop down and depth after 30-50 meters. The seabed in this part of the beach is more rocky.

Specialized rental offices lounges andI did not find umbrellas on Ban Kae. The coastal zone is built up with resorts not very densely and the chaise lounges mainly belong to them. And on the left, the width of the beach tends to zero, leaving the rest two to five meters of sand and often the beach rests on concrete rings or fences of hotels adjacent to the water.

But in principle, in those areas that are wider,deck chairs are also found. And what else is good about Ban Kai is a large number of trees and natural shade. True, because of the small fry in the central and right parts, you have to sit in the luxurious shade of the trees on the edge of the wet seabed, not the sea. Pleasure, as you know, is very doubtful. 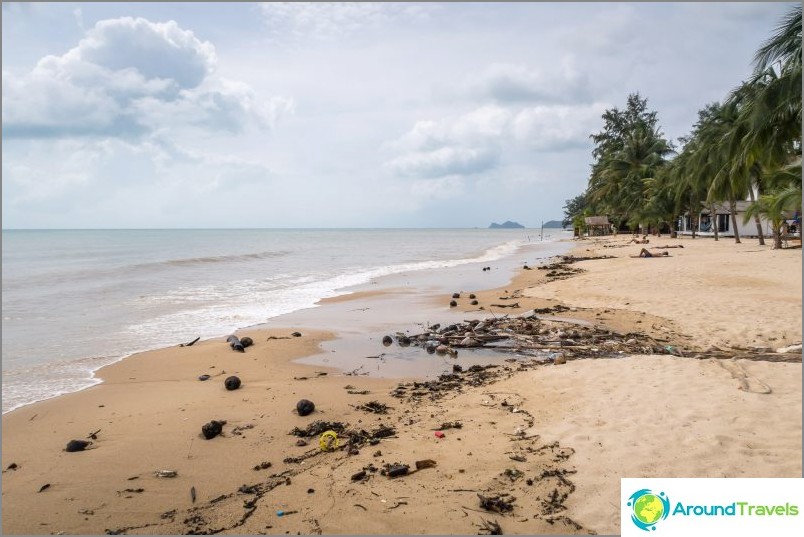 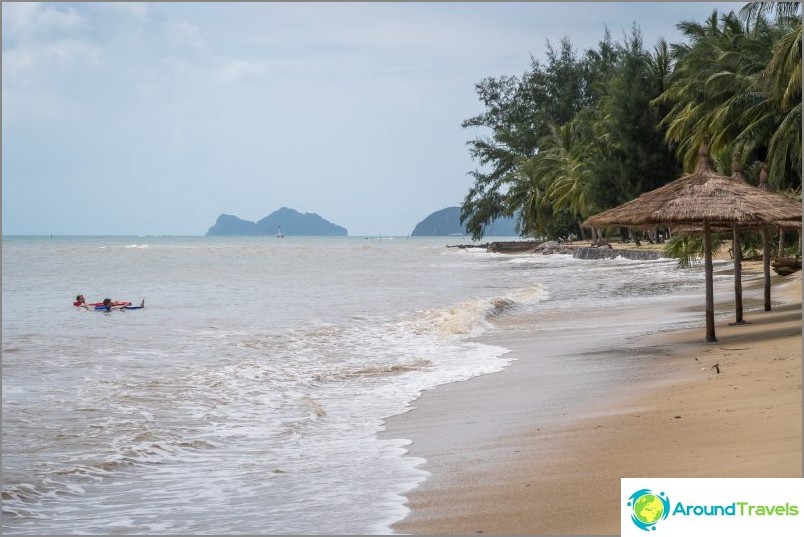 At high water, the beach disappears in some places. 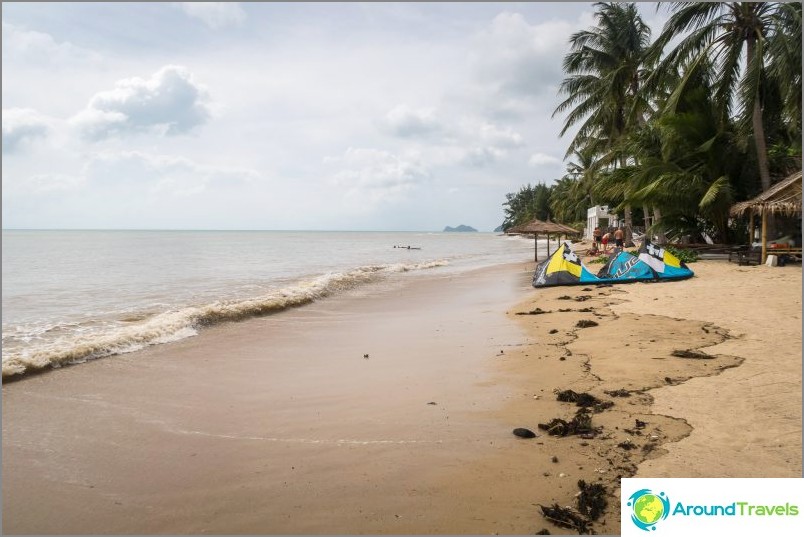 View to the right, towards Ban Tai 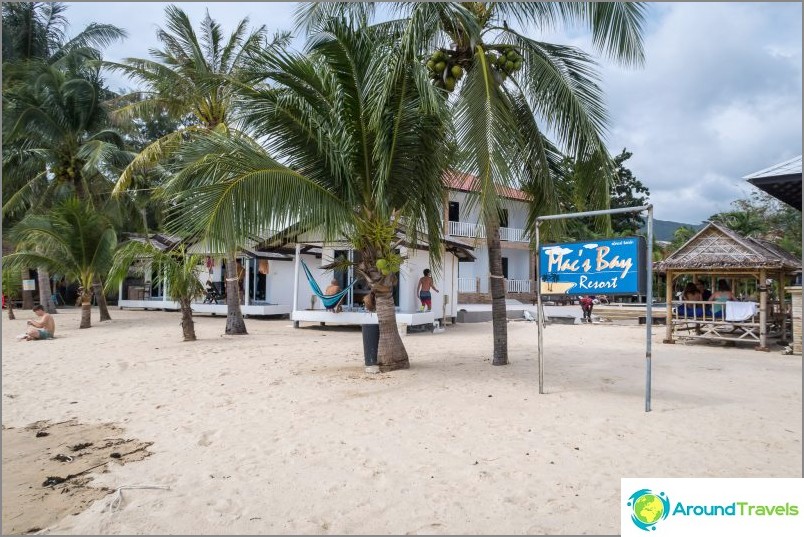 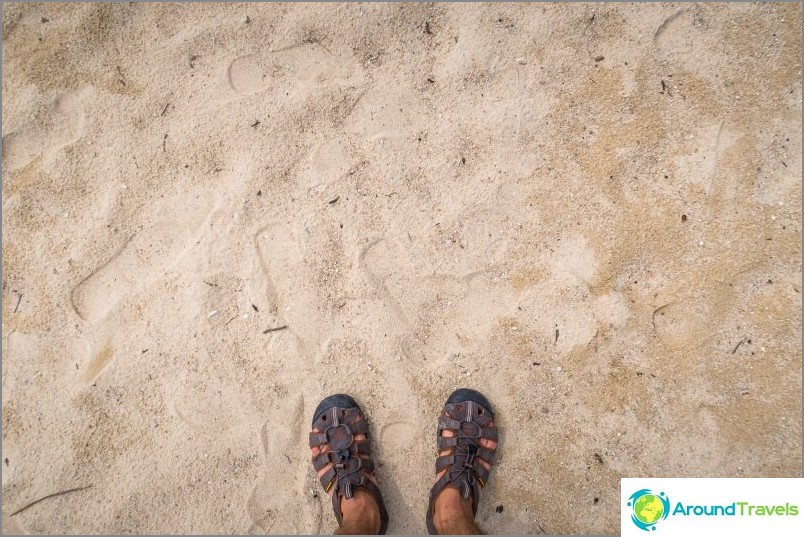 The sand is coarse with admixture of coral debris 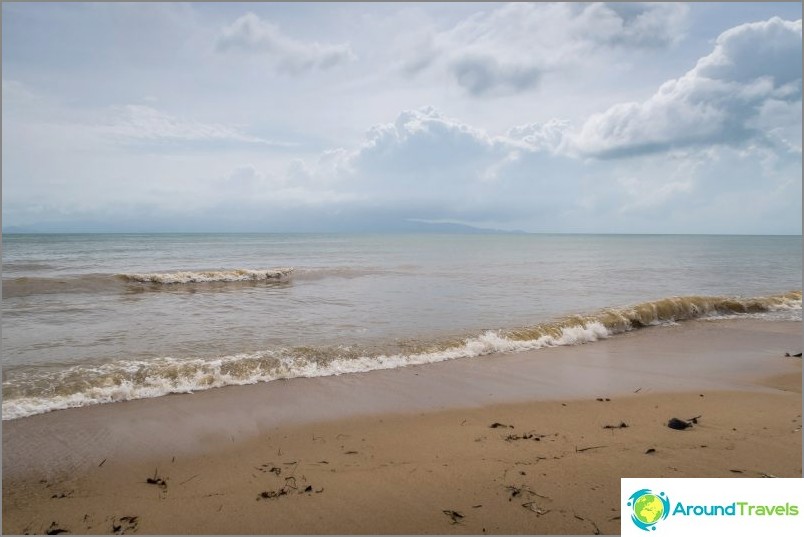 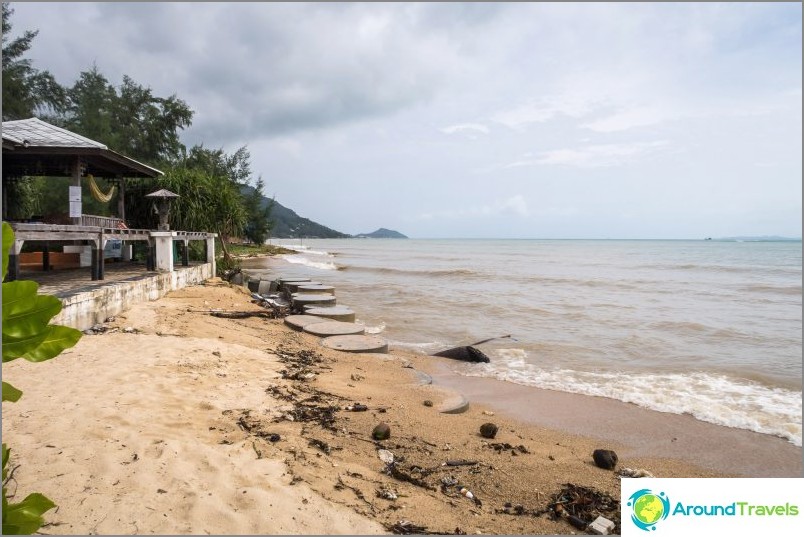 Where the sea has washed away the shore to the buildings, it is reinforced with concrete rings. 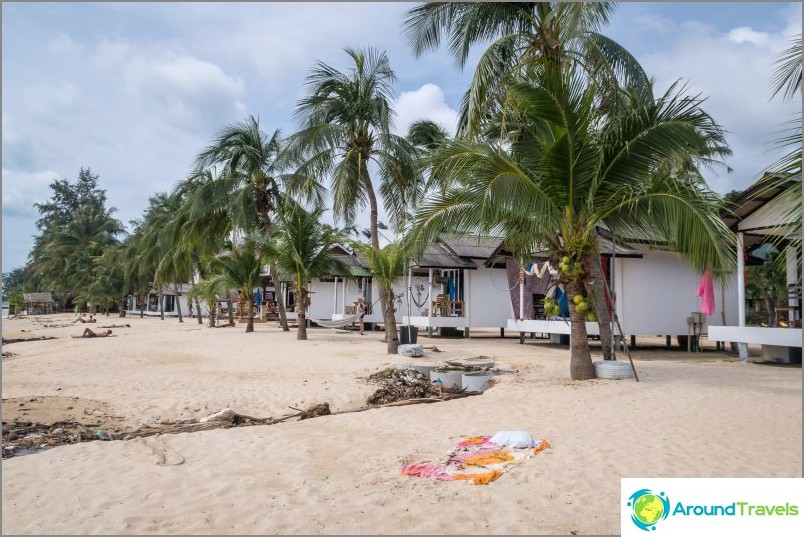 In the rainy season, garbage is more than dofig throughout Ban Kai.

The infrastructure of Ban Kai smoothly takes over all thoseBantai wasteland mixed with built-up areas. The main road to the middle of the beach moves away from the coast far enough and forms a kind of delta, which is already divided into sections, but is built up only thirty percent.

Along the road come across more or less practical.institutions such as shops, rentals, hospital, pharmacies, everything that can attract people from the road. Driving past Ban Kai, you do not even see the sea through all these buildings and bushes.

Closer to the sea, the infrastructure acquires morePop view, aimed mainly at short-term tourist arrivals: agencies, diving, souvenirs, bars, massages and other pleasures of a tropical resort. From the middle of the beach, where the mountain begins, the entire infrastructure moves to the resorts, and the rest of the space is just a jungle of varying degrees of obstruction.

From network stores there is only a mini-market 7-Eleven, and for serious purchases you will have to go to Ban Tai.

In all booking services, Ban Kai BeachIt is listed as Ban Tai, so do not even look for it separately. It is understandable, there is no clear separation, and passing by on a bike you will not notice any drastic changes.

On Ban Kai a good choice of diverse housing, fromcheap hostels to separately rented houses and villas. But if we consider the area of ​​the beach as a whole, the residential buildings are located mainly on the first line of the beach, while there is still a lot of free space on the coast. So do not rush to the settlement at the main road, there may be cheaper, but certainly not so comfortable.

And to the sea in the heat to walk a little interesting. In fact, Ao Baan Kai is an option for unpretentious people who are looking for an inexpensive place to drop things and leave to explore the island. Although I personally would rather settle on Ban Tai, that is, that part of the coast that is closer to Thong Sala.

For several overnight stays, Ban Kai is more thanespecially if you remember that in the evening you get a pleasant opportunity to sit in silence on the shore of the not very crowded beach and watch the sunset. Below I have made a selection of housing on the front line with good reviews and ratings: 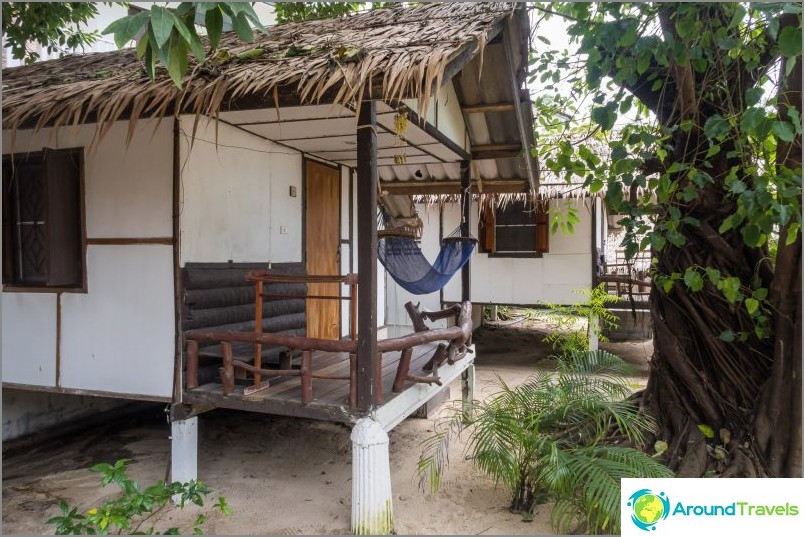 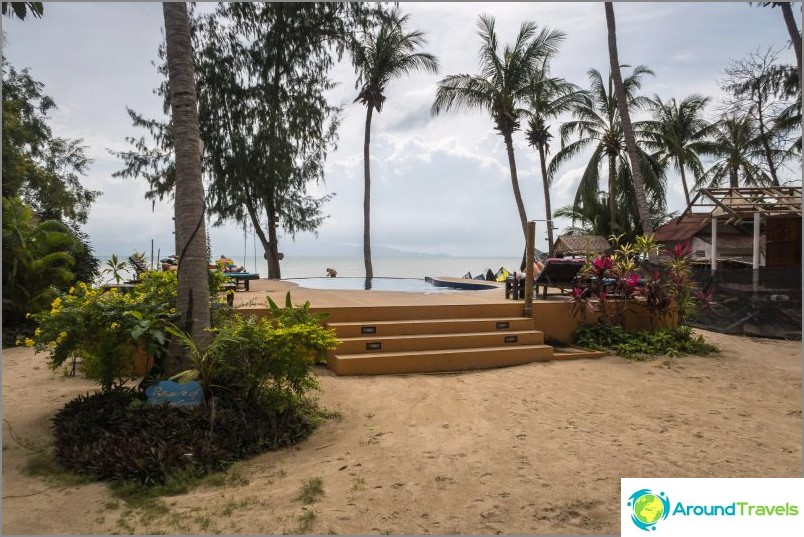 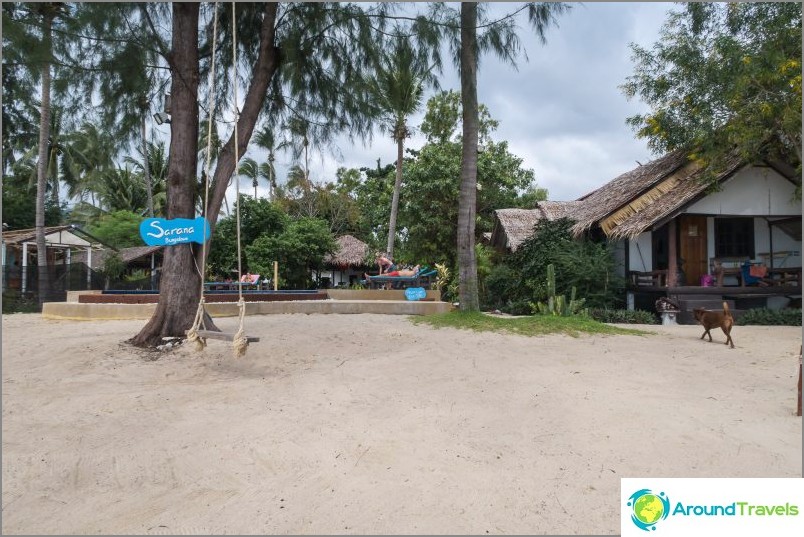 The beach is located on the main road along the way.The traffic from Tong Saly and the main landmark of the beginning of Ban Kai is the division of the main road into two one-way. You will understand what it is about when you see it with your own eyes, but I will put a mark on the map just in case. Immediately after the confluence of one-way roads, you can turn right to the sea at any place - this will be Ban Kai.

I traveled around the resorts of Sarana Bungalows