Bang Pha Falls in Phuket - the largest in Phuket

In Phuket there are not many waterfalls in principle, notto mention some large-scale landmarks that amaze the eyes and ears. Therefore, initially it makes sense to consider Phuket waterfalls rather simply as a place to walk in the woods, but with a bonus - bathing in fresh water. Definitely, one should not expect an unusual spectacle from Bangphe. If you need really high waterfalls and spectacular views, then this is for you to go to the north of Thailand, where there are kilometer-high mountains and hundred-meter waterfalls. However, with all this, the Bangpe waterfall in Phuket is considered one of the largest.

The height of the Bang Pe Waterfall (Bangpae Waterfall) total15 meters, but this is not just a figure, but fifteen meters of sheer falling water, unlike most waterfalls in Phuket, which look like a cascade, babbling over large stones. In simple terms, the Bangpe waterfall is a classic of the genre, which looks very beautiful in the photo and in real life, it has a cupola, and as a whole, due to its combination of advantages, it deserves a separate visit. From the parking lot to walk along the path along the riverbed is literally about ten minutes, at a leisurely pace.

I note that the trail is easy, periodically withuphill climbing, partially covered, therefore a person will cope with trekking with any physical training. As I said, it makes sense to consider a visit simply as a walk through the jungle, although if you have been to a similar place before, for example at Kata Falls , or somewhere on Samui, it will be all the same. The same jungle and river. That is, if this 15-meter waterfall is the largest here in Phuket, then you need to understand what the island’s waterfalls are in principle here.

As the path goes along the river bed, then along the wayyou will come across fonts of different depths and you will see which ones are cupable and which ones are not. I give a hint - everything is trampled around the cupola. By the way, until I remembered - the road to the sights passes through the valley, which is densely planted with rubber plantations. Keep in mind that if you go savage, you should not wander into the landing of the Hevea once again - snakes love hanging out there. And also, on the way to Bang Pe Pei there is an elephant farm where you can feed and ride elephants. Considering the nuances of education and training of elephants, as well as their torn ears and hundreds of small scars on the head from the driver's hook, these attractions are for an amateur, to whom I do not belong. 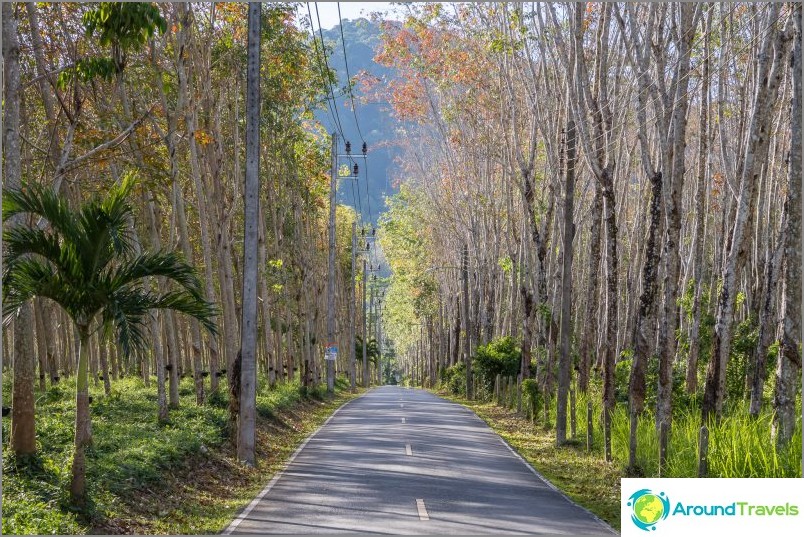 The road to the waterfall is very beautiful 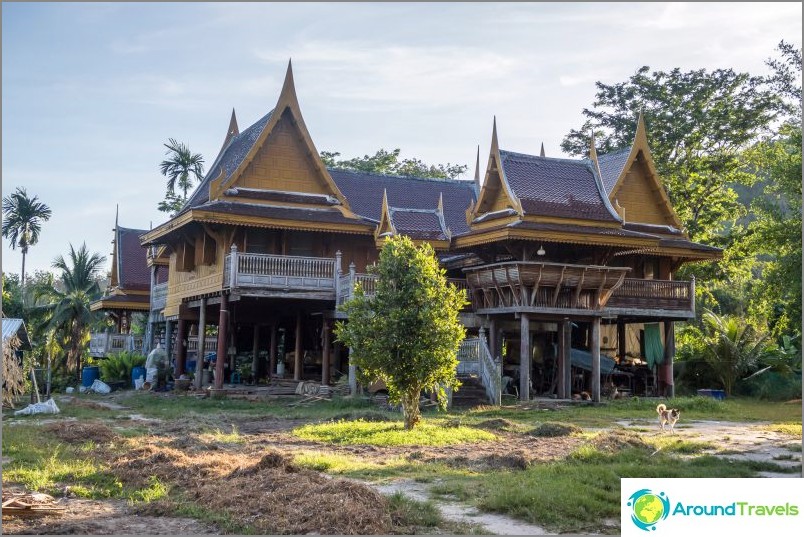 Along the way there are such authentic houses. 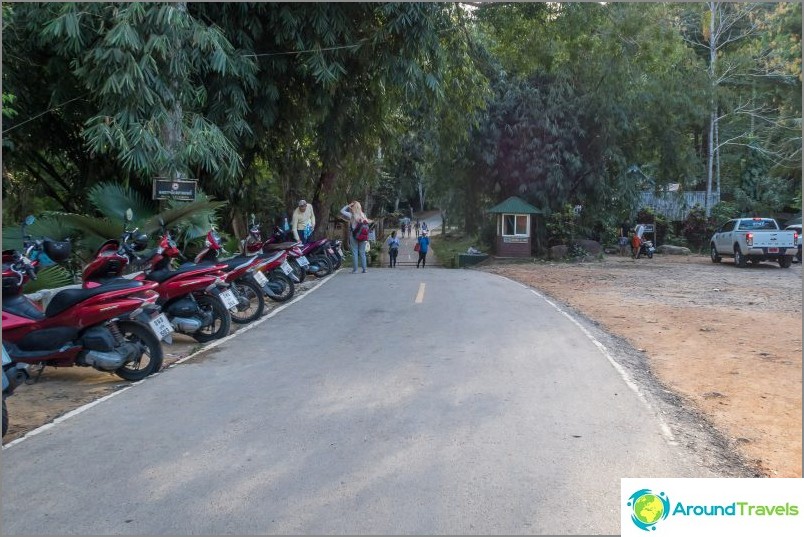 Parking in front of the ticket booth 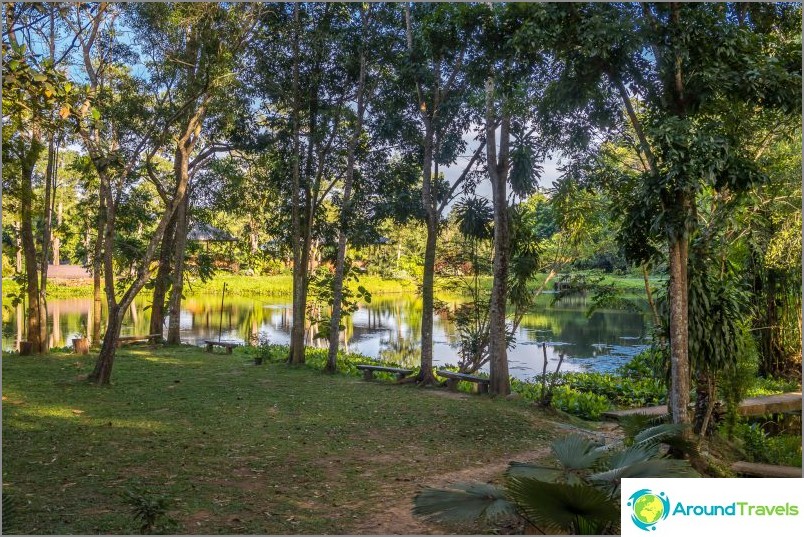 Near the parking there is a pretty lake 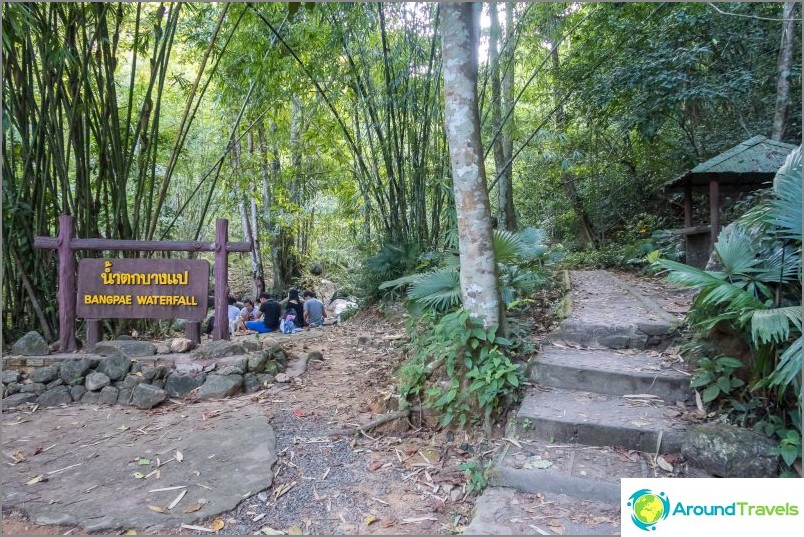 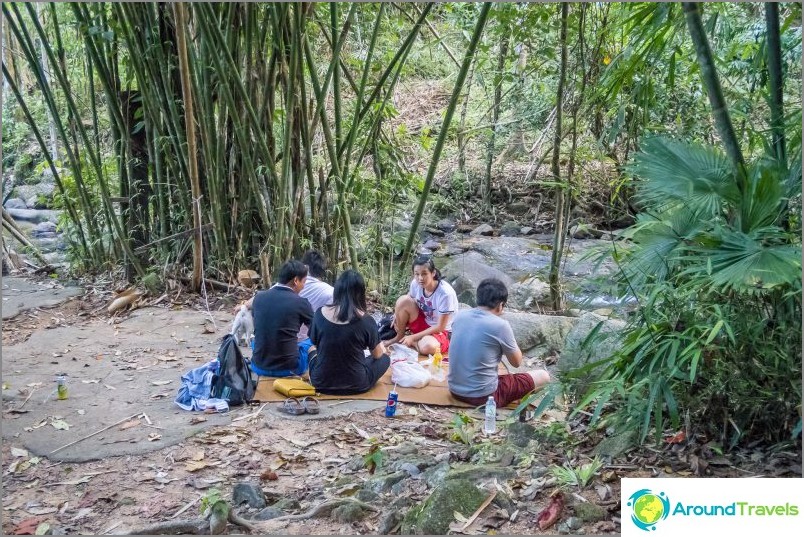 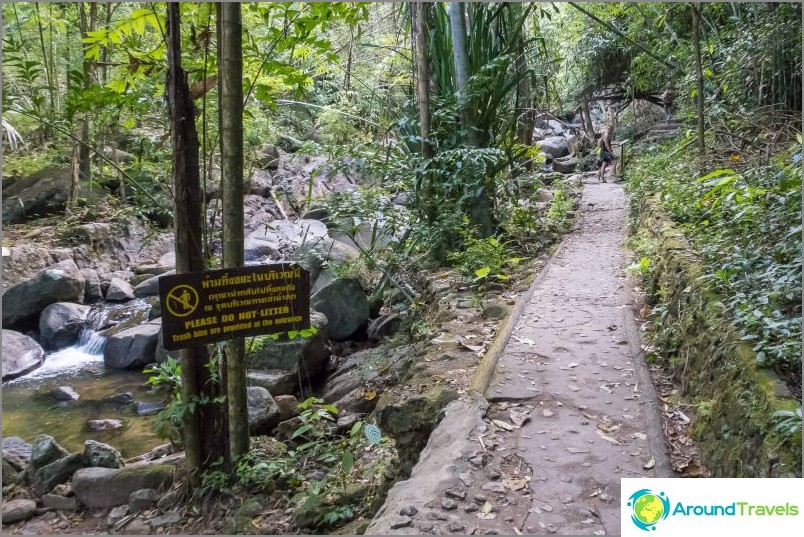 The trail is completely sanitized.

At the end of the path you will run into a waterfall, it is there alone,and there is a font near it. And in the place where the water falls, the depth is more than two meters (not in the dry season, of course). Around this place - to the waist. And the font is rather narrow, you can’t jump in there with a big crowd, and since the tourists live here in large numbers, you know, you are not threatened to swim in proud solitude. On the way there are more pleasant and comfortable places in terms of swimming. But it is in this, and only in one place, that there is a waterfall where you can partially stand under falling water.

Separately, I want to note that if youpurposefully came here to swim and spend time culturally - do not forget about decency. This is the south of Thailand, there are many Muslims, for whom bathing topless or in too explicit swimsuits can be a shock, even to call the police. The place is not only popular with tourists. Thais come to Bangpay in large numbers, and they usually hold picnics with their families. Despite the stupid prejudices, they should be considered, for we are tourists here, not them. 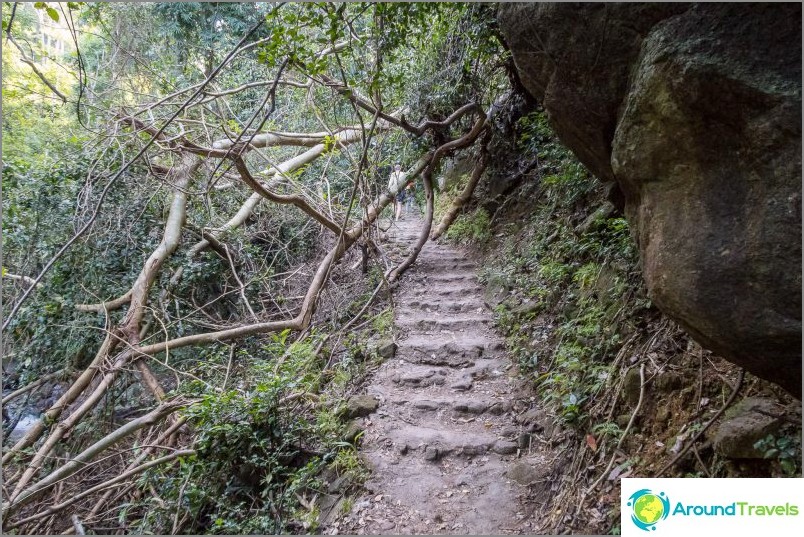 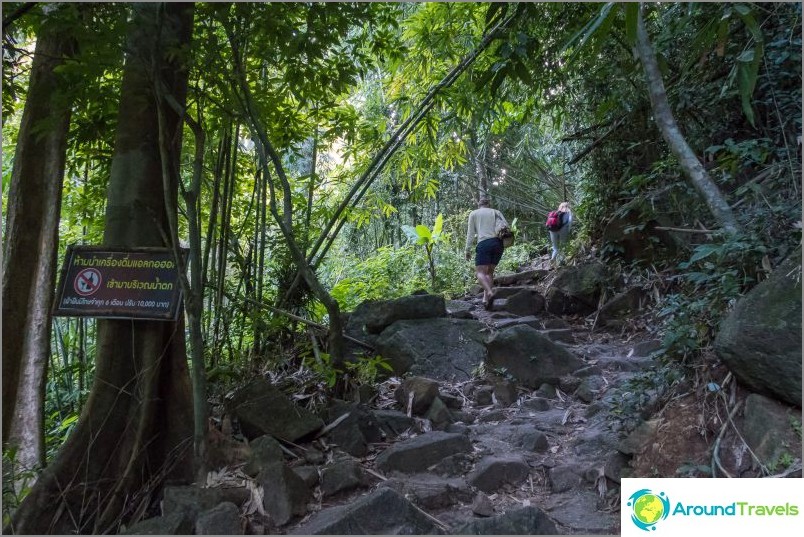 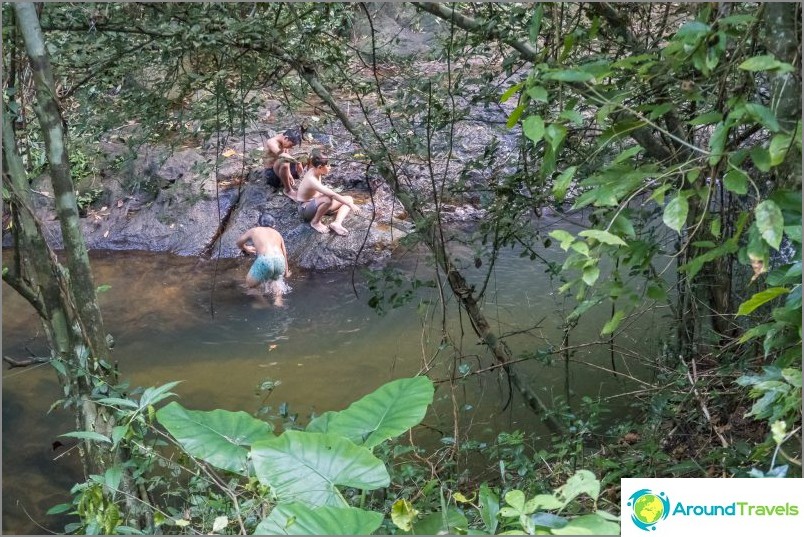 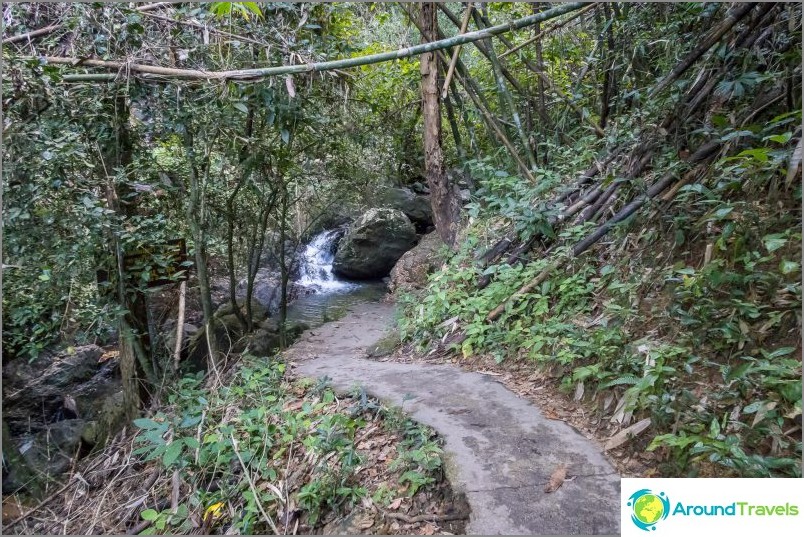 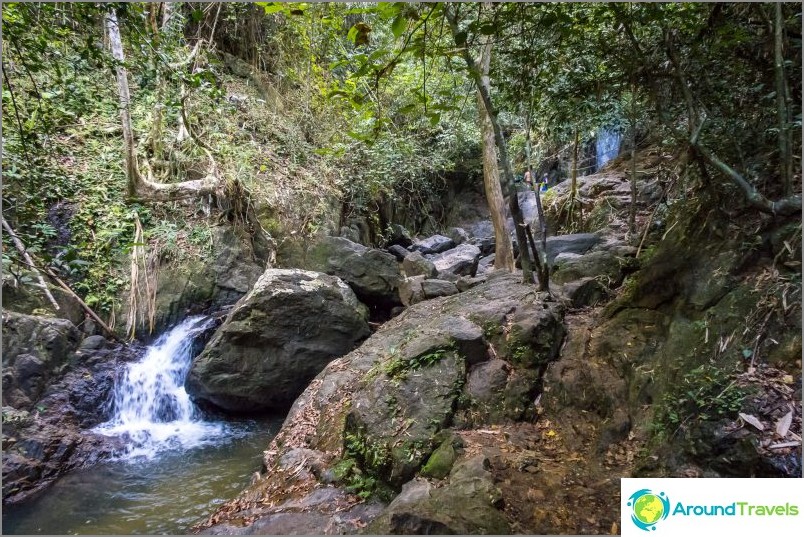 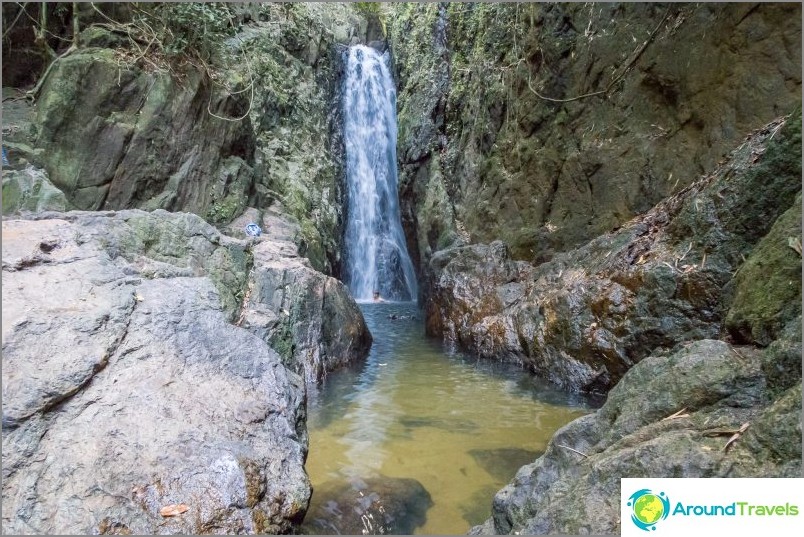 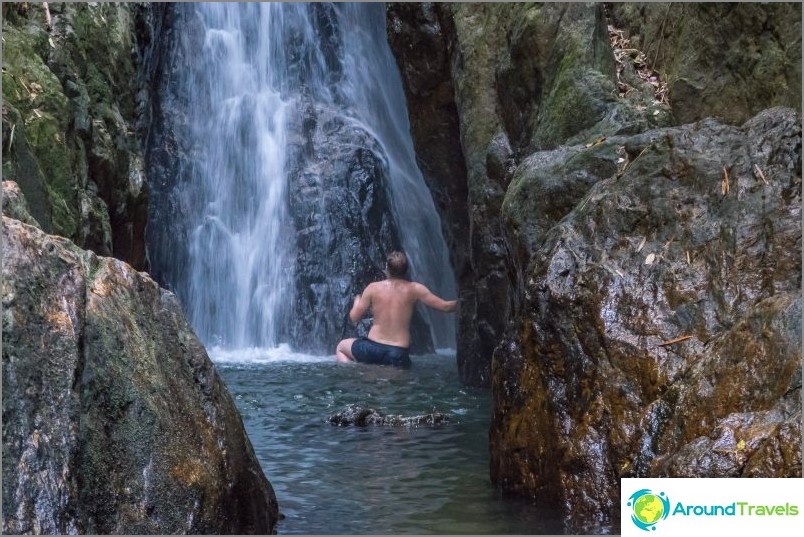 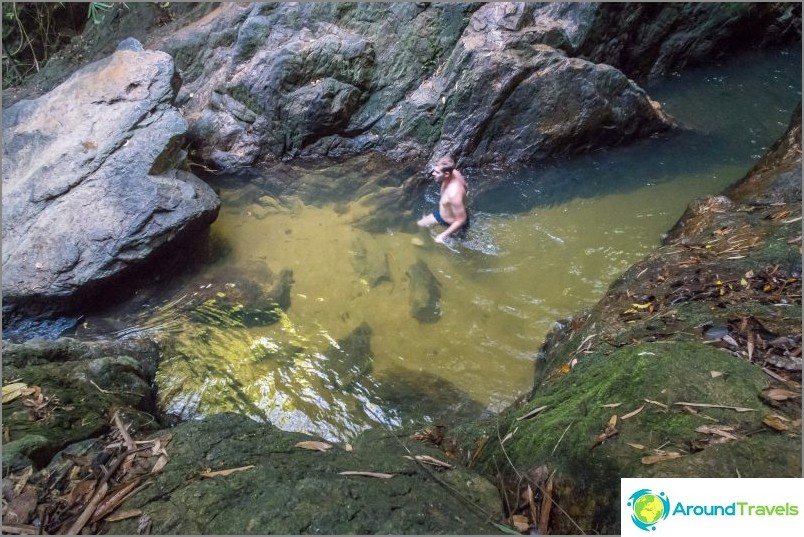 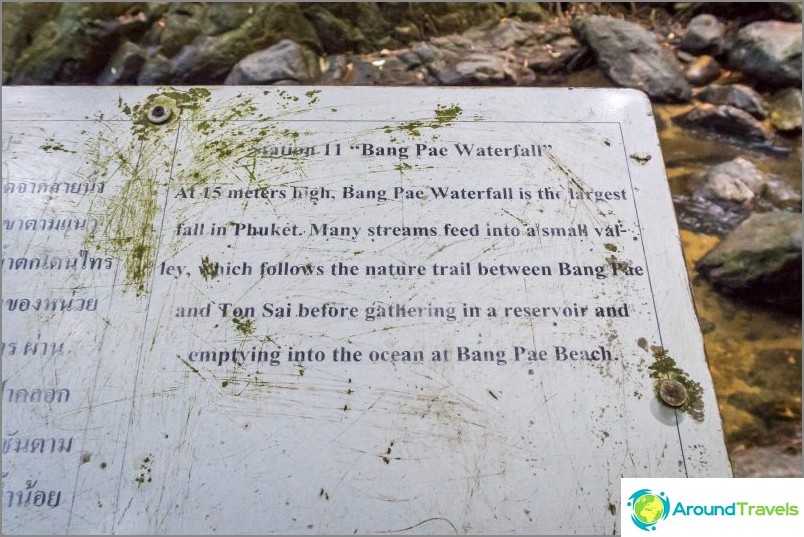 Bang Pe Waterfall is the largest in Phuket 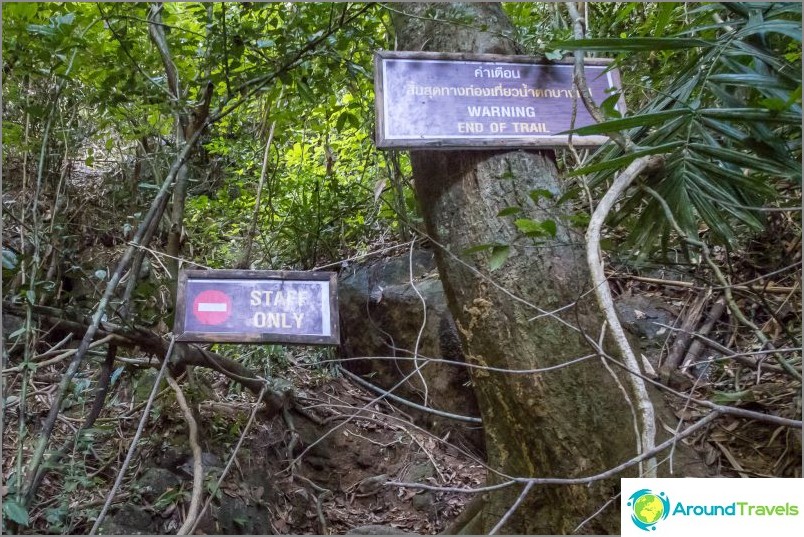 At the waterfall end of the trail, such as can not be further

Before entering the waterfall there is a centergibbons' rehabilitation, I didn’t get there, but judging by the reviews, there’s really nothing to watch, at best you’ll see gibbons from afar, nobody is allowed to go anywhere. Gibbons are confiscated by smugglers, illegal zoos and simply owners who are cruel to animals. Of the sixteen species on the planet, four species of gibbons are found in nature in Thailand.

The rehabilitation center does not charge for admission, but does not refuse donations and offers a guardianship service that will cost you 1,500 baht per year. 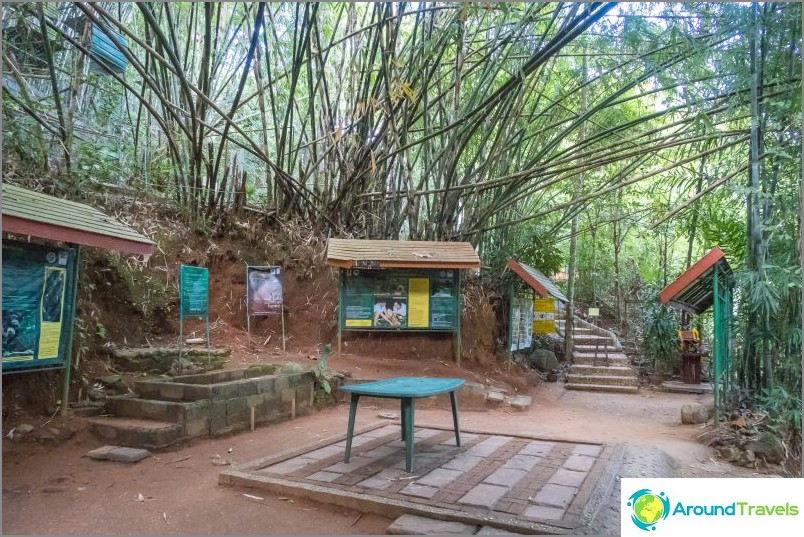 The entrance to the territory with the Bang Pe waterfall is worth200 baht. But I arrived at 16-45 and did not pay anything to anyone - there was no ticket attendant in the booth, and not only I was so lucky. Consider it lifehack for the budget. Moreover, at five in the evening there are few people here, the sun is almost invisible - it is beyond the mountain. Well, in general - cool, good, refreshing.

The gibbon center is open from 9 to 16-30 except Saturday,and the waterfall is open to the entrance from 9 to 17, but in fact I went out at 18, and people still went to meet, that is, there is nothing closed and you can even come early in the morning.

Bangpe Waterfall in Phuket is located innortheastern part of the island. If you drive here from all beaches, then moving towards the airport, not reaching the monument to the heroine sisters, you should turn right to the east coast. Google knows this place, and the navigator will bring you. Well, along the way there will be pointers that are difficult to slip past.

Bangpae Waterfall
The largest waterfall in Phuket, the water in it falls down from a 15-meter height. On the way to the waterfall, you can look at the gibbon nursery.
More about the waterfall. 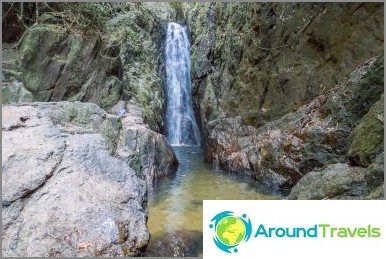 The largest waterfall in Phuket, the water in it falls down from a 15-meter height. On the way to the waterfall, you can look at the gibbon nursery. More about the waterfall.