Pai Plong's small beach is separated fromAo Nang beach is a collapsed slope of the mountain, which is very prominent in the sea and densely overgrown with jungle. A trail called the Monkey Trail is laid through this hill because of the large number of long-tailed macaques living there.

The beach turned out with the only entrance and exit, inclosed lagoon on all sides, surrounded by impassable mountains. Beautiful such a small and private beach, behind which is the only hotel - expensive chain Centara Grand Beach Resort

. From the beach there is a view of the picturesque rock in the sea, to the south of which, behind the cape on the left, lies the popular peninsula among tourists. Railay.

Pye Plong is also called by name adjacent hotel Centara Resort - Centara Beach. The beach of Tsentar has a length of about 200 meters and, in my opinion, it is one of the best beaches in Krabi. Only one minus - it's hard to get here.

The beach is located so that not everyonewants to go on the Monkey Trail, well, not every day - for sure. Therefore, there is absolutely no people here, clean, smoothed sand, while it is surrounded on three sides by rocks and it turns out such a cozy, small bay.

Despite the fact that the beach looks private,if desired, any tourist can get here, sunbathe and swim as much as he wants. The sand on the beach varies slightly depending on the proximity to the sea. By the water it is yellow, large, interspersed with seashells and larger stones.

And closer to the grass cover - small, light, pleasant to the touch and clean. The reasons are clear - this is the beach of an expensive hotel, it is monitored and well cleaned, so there is no garbage.

Sunset on the beach is smooth, without sharpdifferences and thresholds. The bottom slope increases gradually and very long. The depth of the neck comes about 20 meters from the coast, and at low tide you will have to walk up to 40-50 meters, if not more. What is great about Pai Plong is a clean bottom without stones and corals.

At different times of the year the water may be slightlymuddy, but in calm weather the sea is amazingly beautiful. There are waves on the Center, but mostly - not in season, in summer. On this beach, as well as on the neighboring, ebbs are strongly pronounced. When the water leaves, the width of the beach rises from 10 to 30 meters.

Sun beds for public use on the beachNo, they are only for hotel guests and stand on its territory. So, if you are not a guest of Tsentary, you will have to take a rug with you, or be savage in the sand. There is a shadow only on the edges of the beach (from the rocks) and it is there, depending on the time of day.

Also saw a few trees that leanedabove the shore, but below them are the loungers of the hotel. So in the afternoon, when the shadows become short, there is no place to hide from the sun - the beach looks to the west, and the longer the time is from noon, the smaller the shadow becomes. Along the fence, the Centers constantly ply two or three guards, who politely but relentlessly show off the curious. 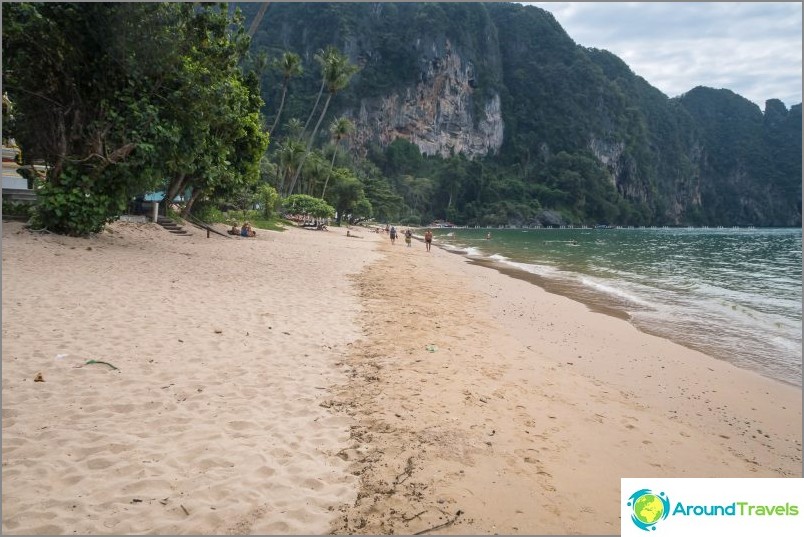 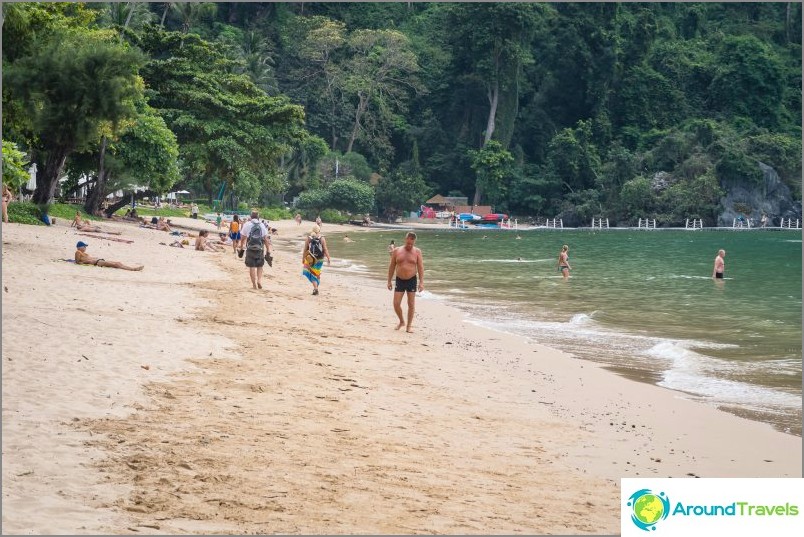 The beach is well maintained and clean. 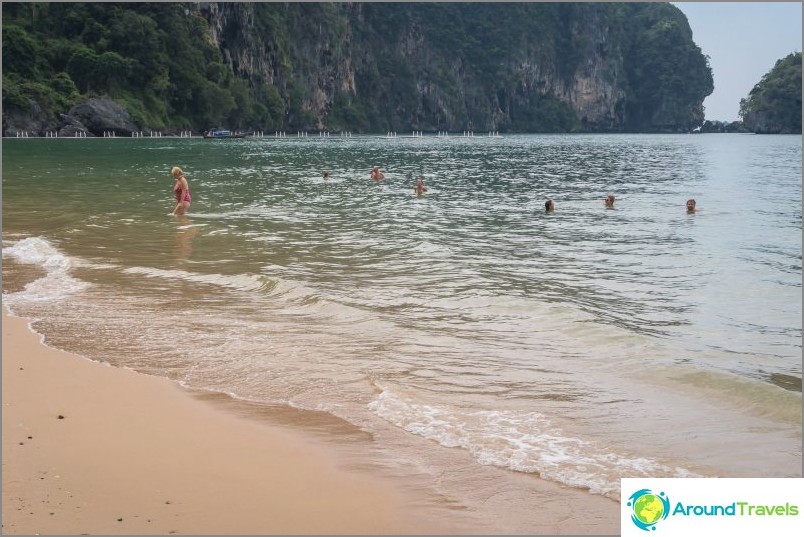 At low tide people bathe, this is the question of the depth 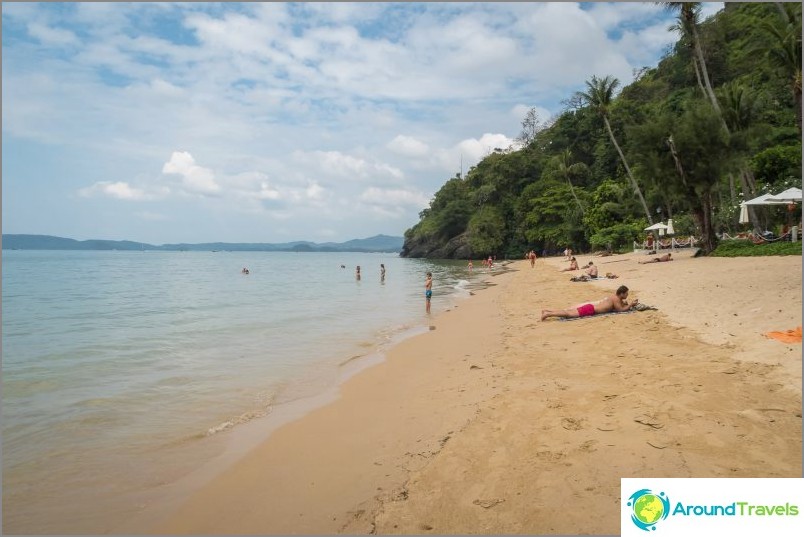 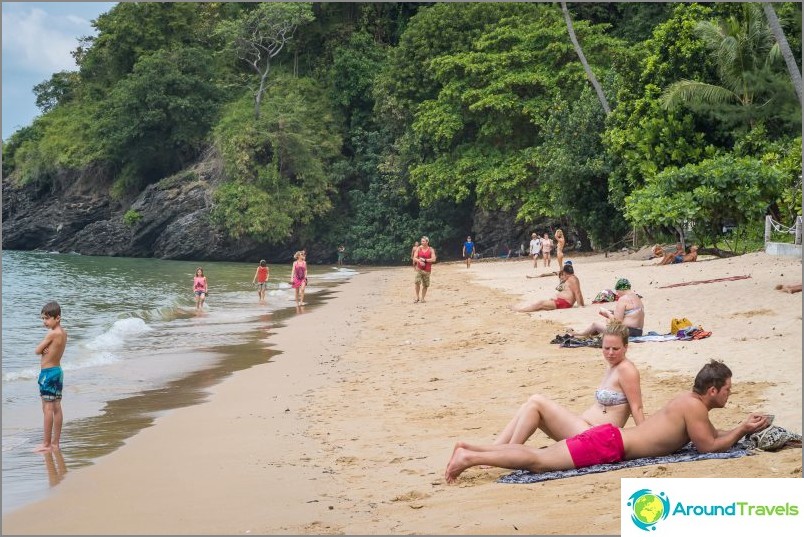 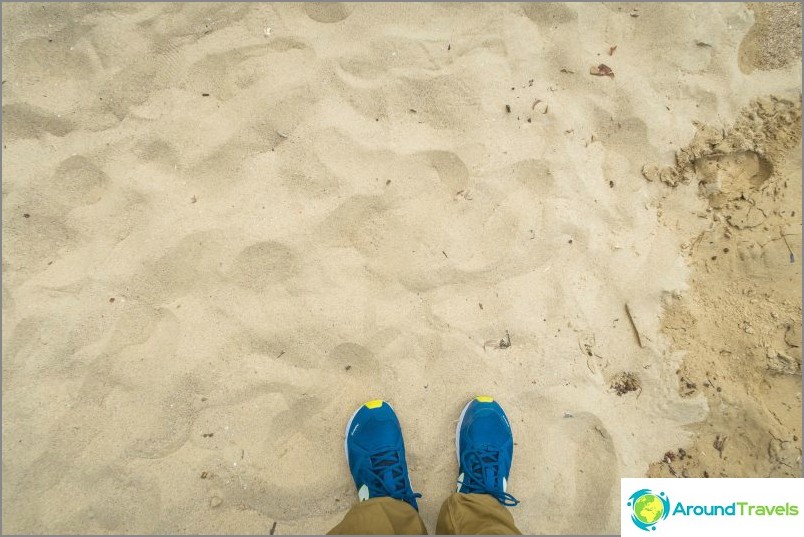 The sand is looser for a walk, you constantly skid 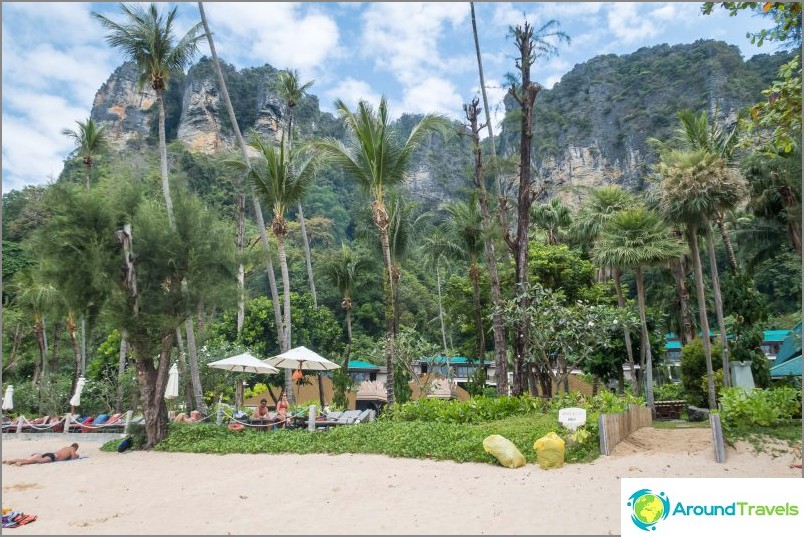 The area behind the beach of Centar Beach 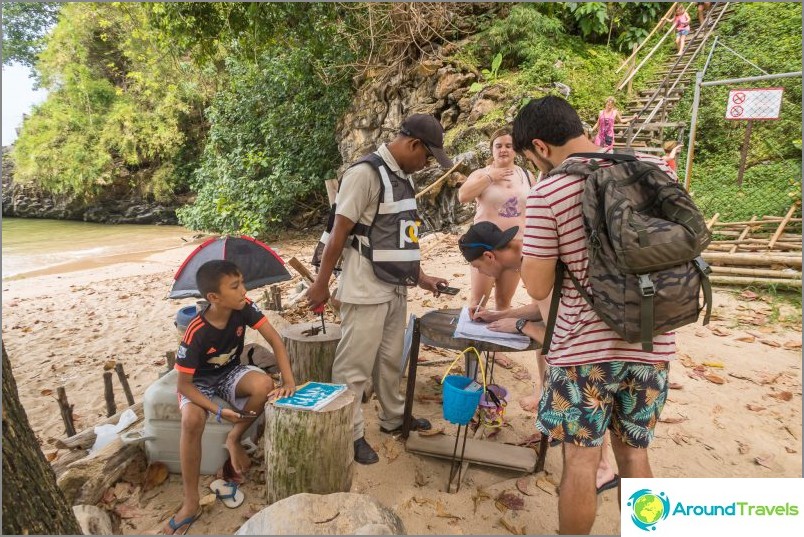 On the descent, near the stairs there is a guard with a notebook, the entrance is by appointment 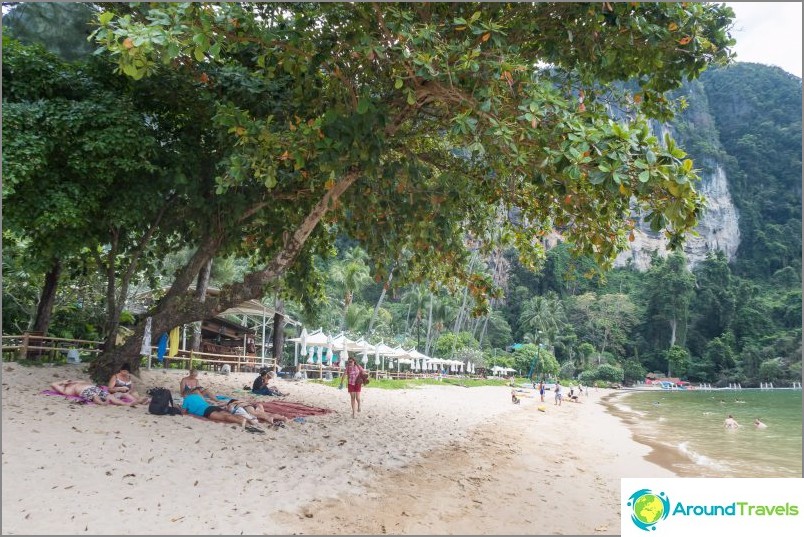 Shadow can be staked if you come early 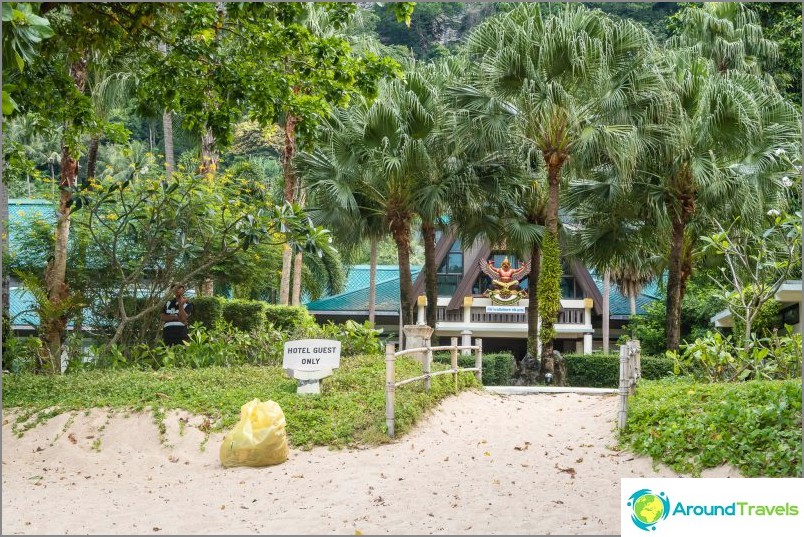 Hotel beds can not be counted 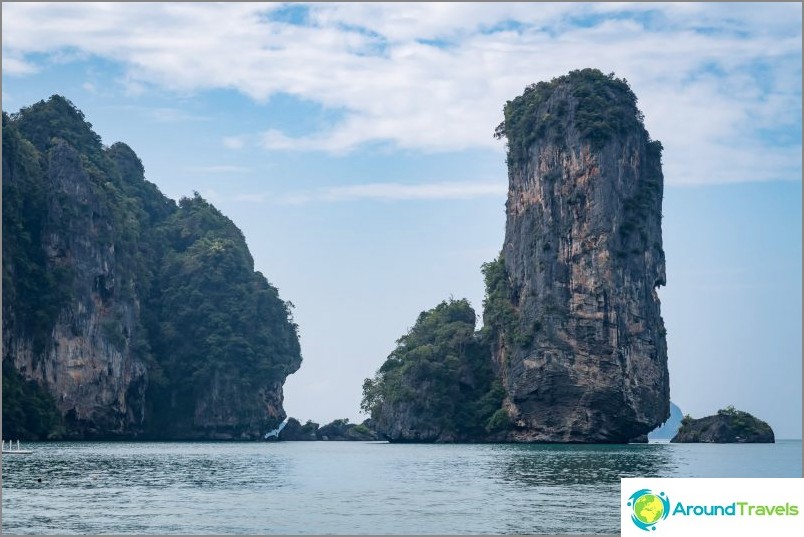 Centara Beach is the last pedestrian-accessible beach on this edge of the resort. Behind the rocks, on the left, Riley and its four beaches begin: Riley East and West, Ton Sai and Phra Nang. 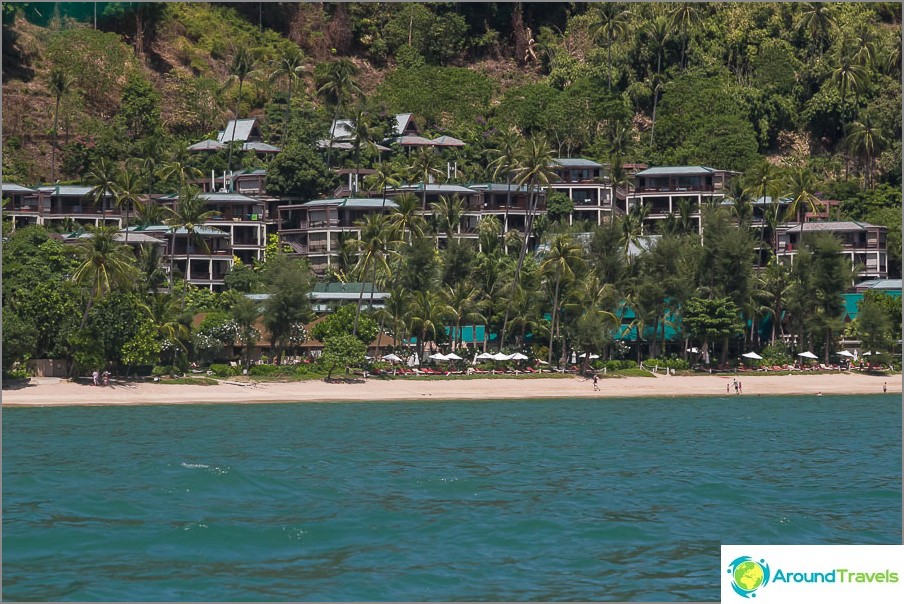 There are no shops on the beach, usual for usmerchants do not go here either. If you want to buy water or something to eat, it can be done at the hotel’s cafe, but the prices there will be at least twice as high as the prices for the same in Ao Nang cafes. So, if you are going to the beach, it is better to take everything with you, especially water.

From sights and entertainment you cancall snorkeling near the rocks near the beach. There is also a rental of surfboards and kayaks, but everything costs more than in Ao Nang. For lovers of diving and swimming at a depth, as well as for receiving boats, the Center has its own pontoon pier of plastic sections.

, there is nothing more from housing. Pai Plong could be a private beach hotel, but since by law in Thailand, all beaches are public, visitors are allowed on it freely.

For the lazy, here's a direct link to the hotel above. Centara Grand Beach Resort

From the southern edge of Ao Nang, where next to the rocka small river flows into the sea, begins the so-called Monkey trail - the path out of the boardwalk, going along the mountain. We must face the sea, and then go to the left-most part of Ao Nang. Pass through the rows of massage parlors, then cross over the river to the stinker (behind the massage parlors, there is a marker on the map) and walk all the way along it.

To wooden footbridge. You can walk along the beach itself, but there, across the riverbed, there is a very flimsy bridge, along which it is dumb to walk, especially at high tide. Near the entrance to the Monkey Trail there is a large parking for cars and bikes, skip it will not work. Just 15 minutes, admiring the excellent views and accompanied by monkeys, you get to the beach Pai Plong.

Below, at the end of the trail, a guard can sit inbooth and write in a notebook the names of the guests of the beach. Why this is done is not clear, because when you go back you do not need to write out and the record as a whole goes without checking with the documents. The path on the rocks is made of sturdy boards, rises up, crosses over the cliff and goes down to the beach of Tsentar.

The second option is by sea, on longs. Usually boats sail from Ao Nang to Railay past this beach. It is located just between these two beaches. The guests of the hotel Tsentar to the beach are brought in boats to their pier. On the transfer to the beach, you can agree, for example, with boatmen, standing in Ao Nang.

When you go along the trail, be careful with the monkeys. It’s better not to feed them anything and not show them food. Monkeys can be aggressive and there are a lot of them on the path! 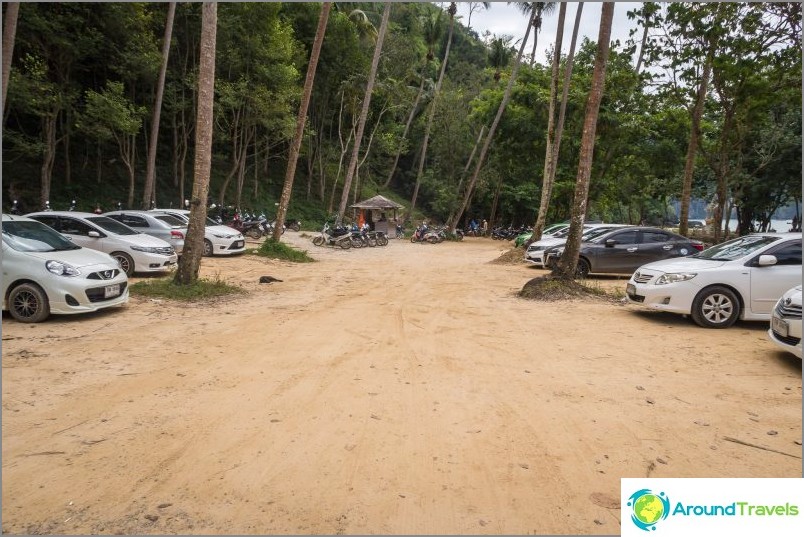 Parking before the start of the Monkey Trail 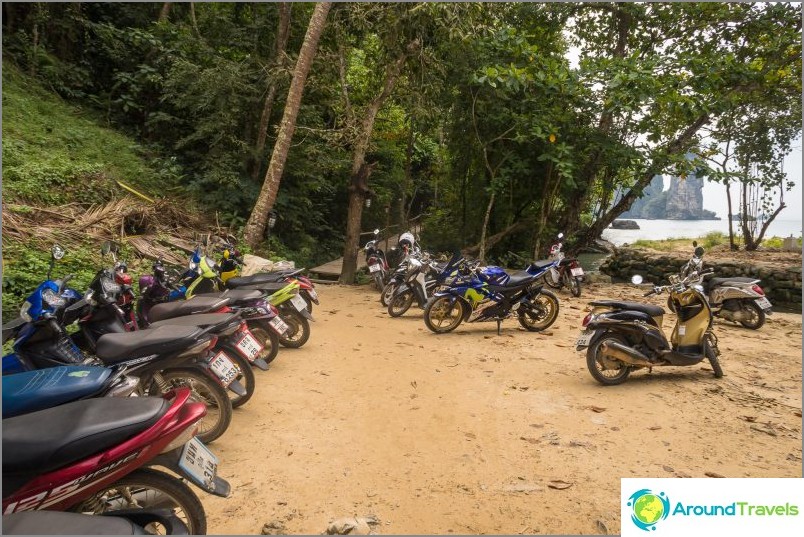 Parking is available across the river from Ao Nang Beach. 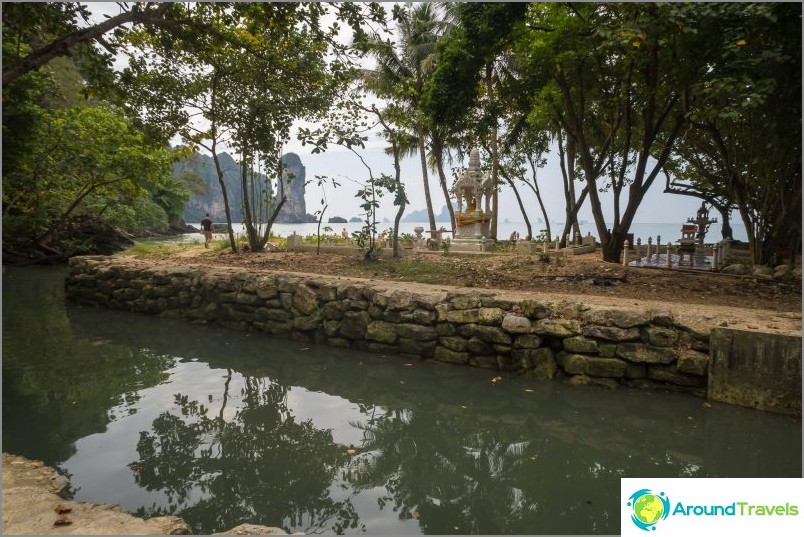 The river is quite deep and wide even in the dry season, and there is a lot of bad things in the water from around Ao Nang 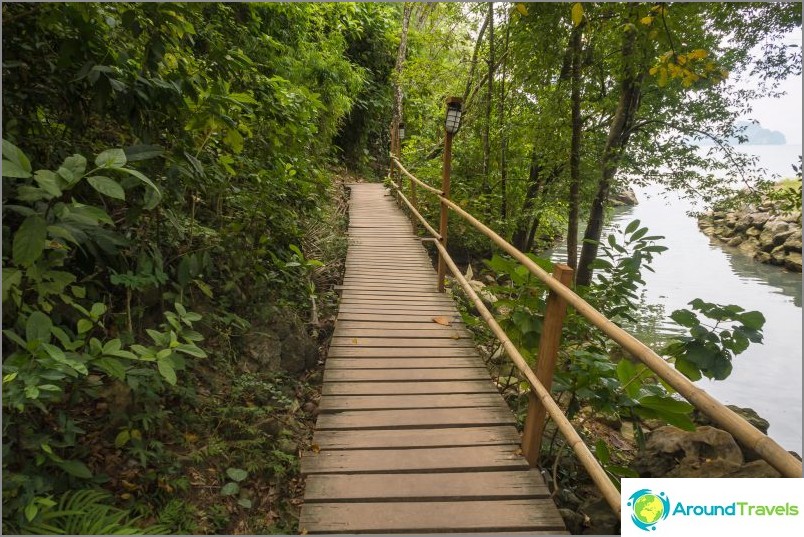 Monkey Trail starts quite a civilized 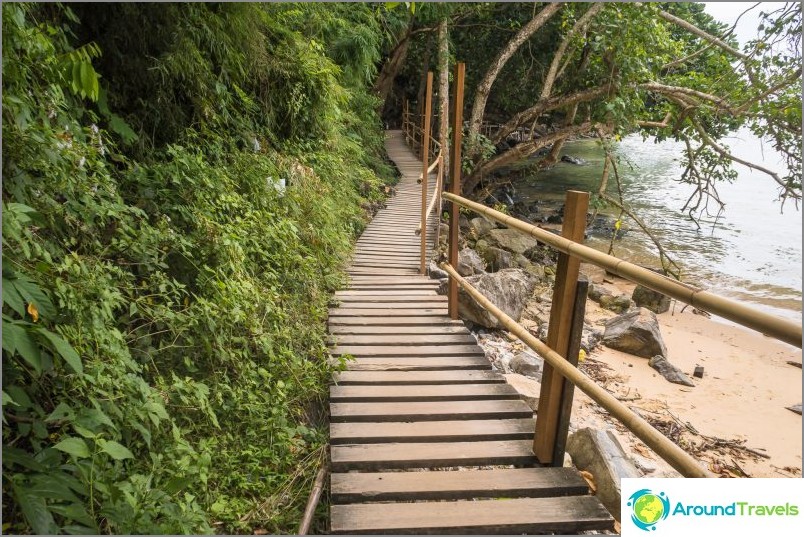 Then the boards become shorter and worse. 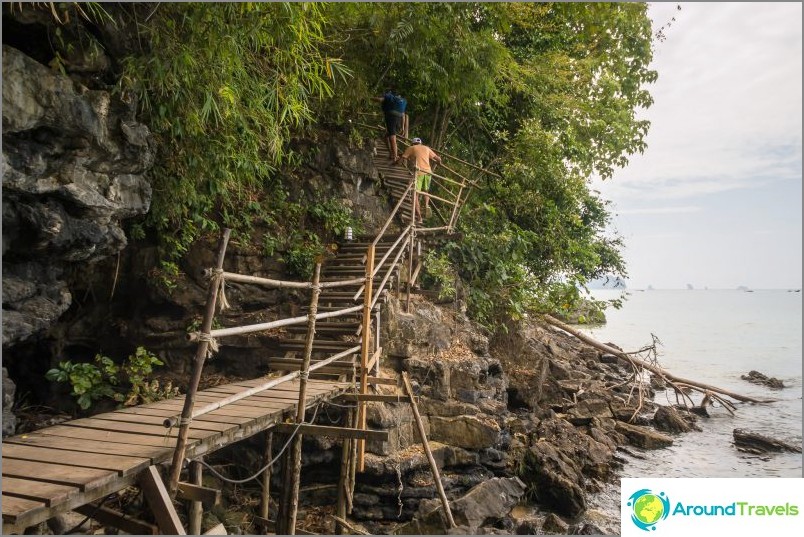 Well, on the rise there are already bamboo rails and stairs made of different materials. 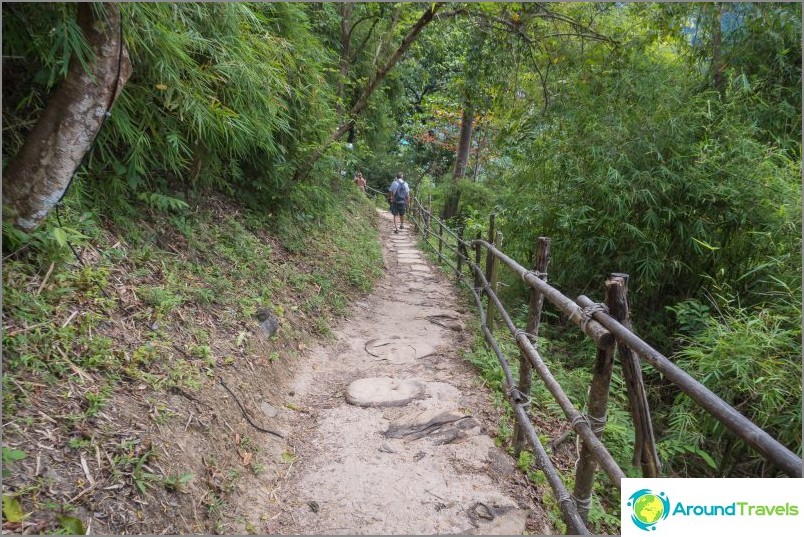 On the trail at the top of the pass, you can take a break for about three minutes on foot. 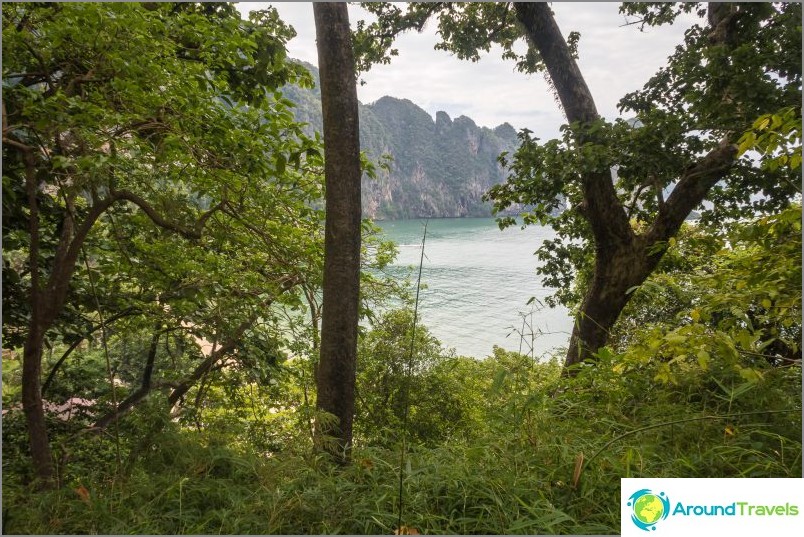 Because of the thicket on the slope, the view from the trail is not as steep as it could be.