Beach with planes in Phuket and a bit of spotting

There are places on the planet where planes landvery close to people, and where they can be captured on a photo or video camera. This activity in the common people is called spotting, although spotting is a whole hobby and photographing flying machines is only a part of it. So, the beach with planes in Phuket is great for spotting, which I went to. I am not a spotter myself, but I liked it - I felt how a multi-ton colossus flies over your head, very unusual impressions. Still, I do not like classic sights, but something such.

Beach with planes in Phuket

Phuket Airport located in close proximity tobeach, so vacationers on this beach were able to contemplate landing and taking off aircraft. Honestly, I do not know the name of this beach, because somewhere here Nai yang beach goes into Mai Cao Beach. Therefore, in some reports they write that this is Nai Yang, in others that Mai Kao. But, in fact, it does not matter, because the main planes!

Airport runway is locatedperpendicular to the coastline and the planes land and land 100 meters from the coast. The stretch of beach opposite the airport is free to visit and is not guarded. You can come there at any time and feel for yourself the full power of the aircraft. Interesting, I tell you, sensations to see how several hundred tons fly right over you. But that's not all! I did not know about it, somehow it did not occur to me. When the plane takes off, or rather stands at the start, then from its turbines powerful air flows just towards the beach, and if you fall under them, it almost knocks you down. But if anything, then there is where to hide - behind concrete blocks, on which stands a fence. 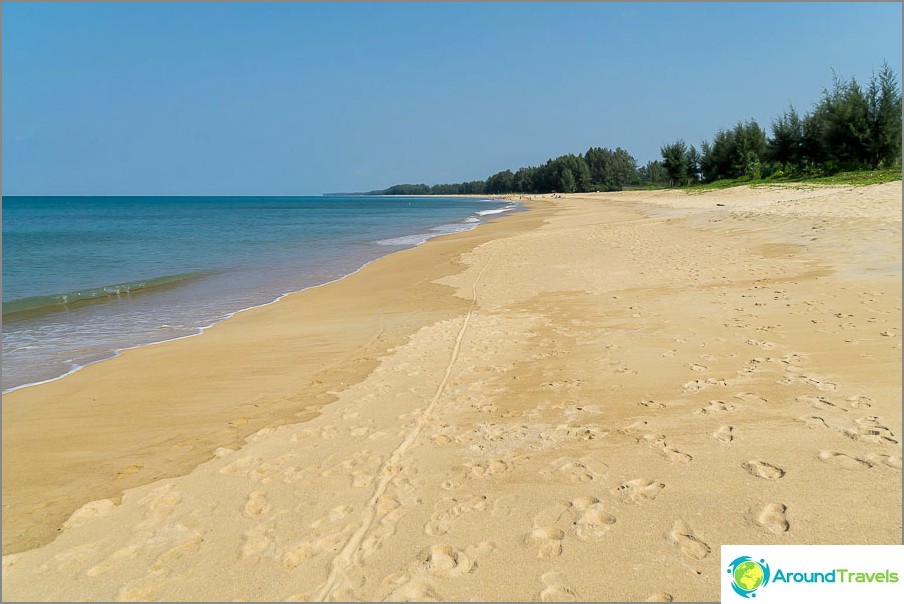 This is the same beach with planes in Phuket 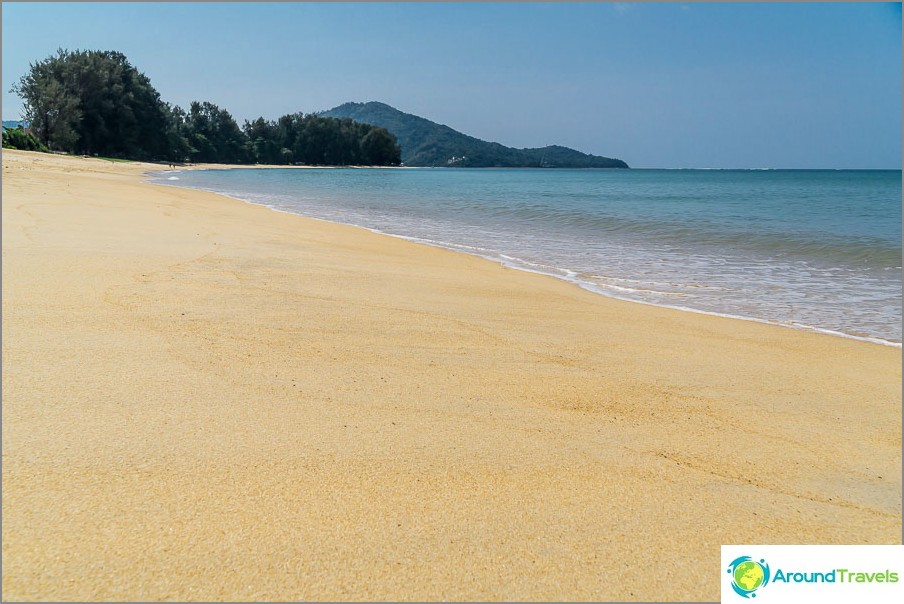 Not just Mai Kao beach, but a beautiful beach! 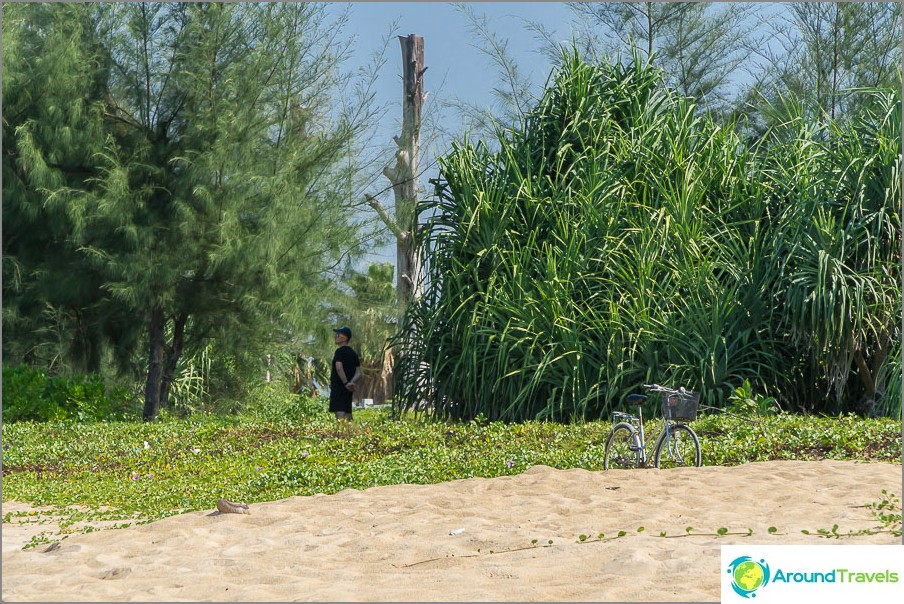 Spotters hiding in the bushes 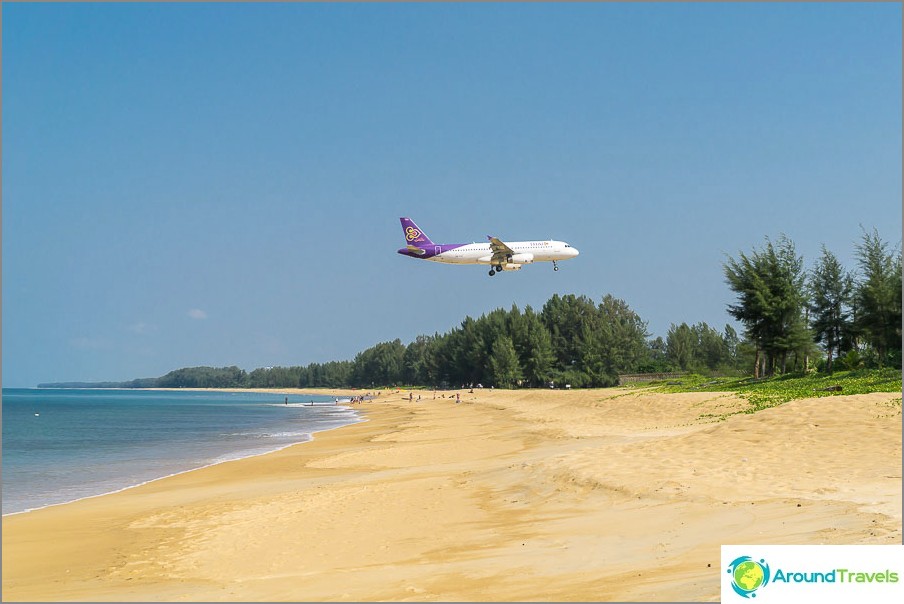 Here is my first spotting 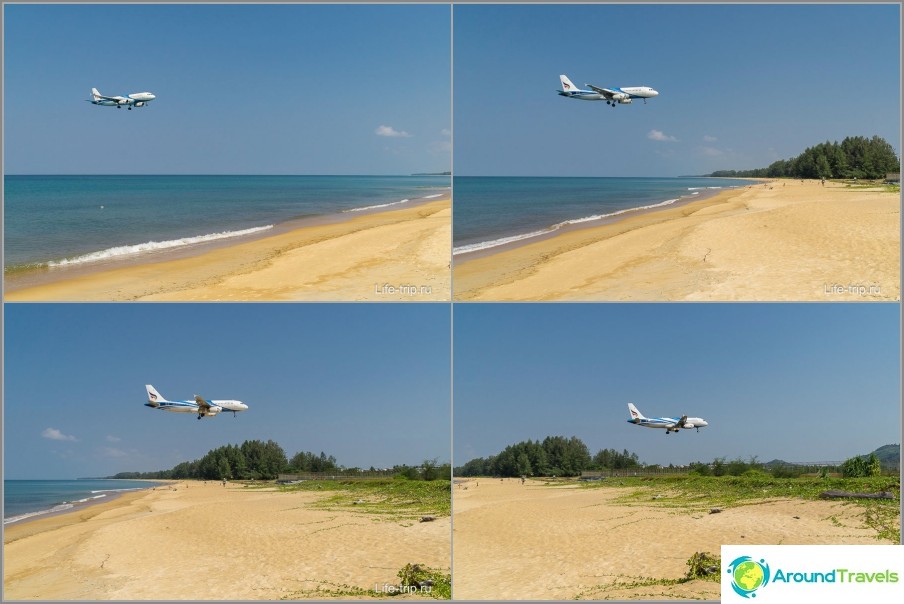 Beach in Phuket where planes land 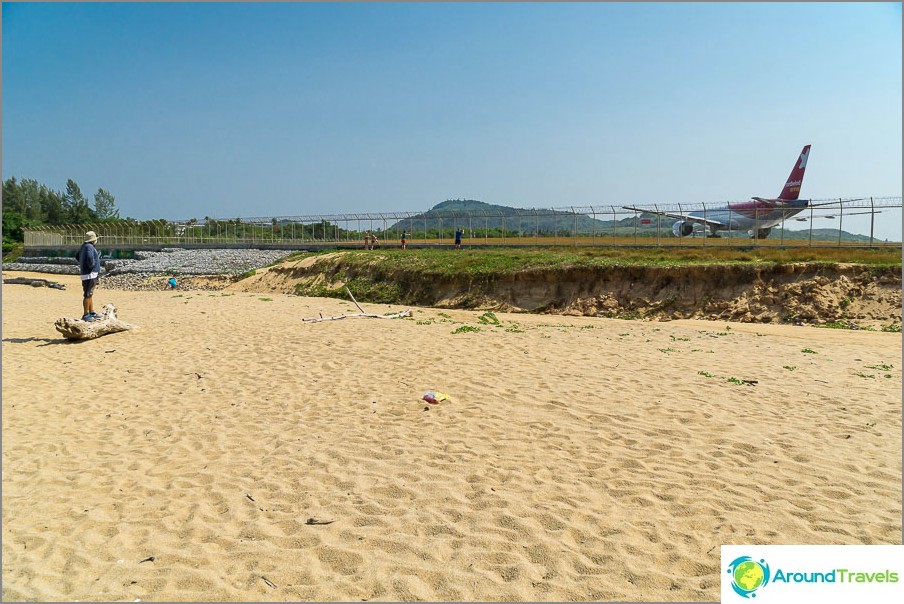 We go along the beach further to the airport fence 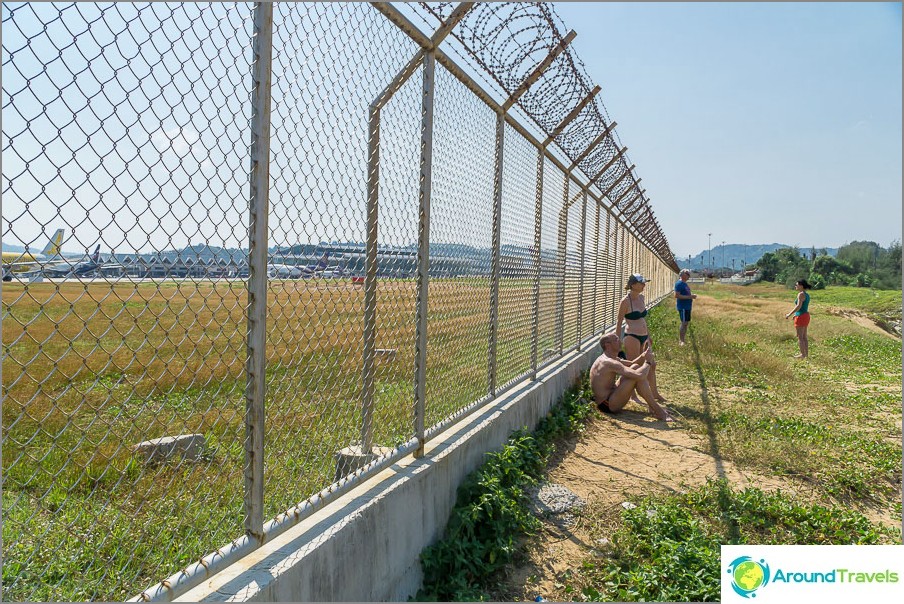 And here, too, spotters, sit waiting 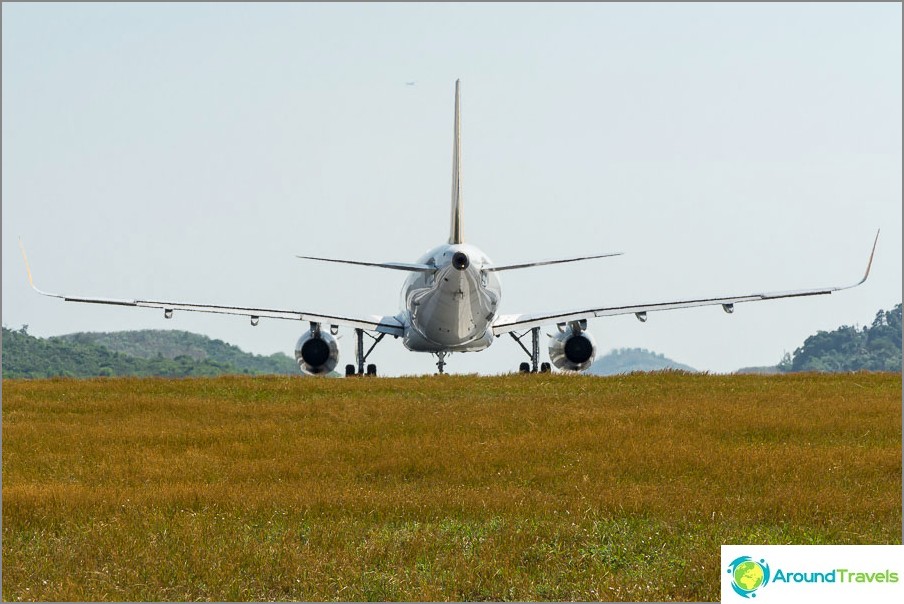 When the plane takes off, it seems that now will blow away a hot wave 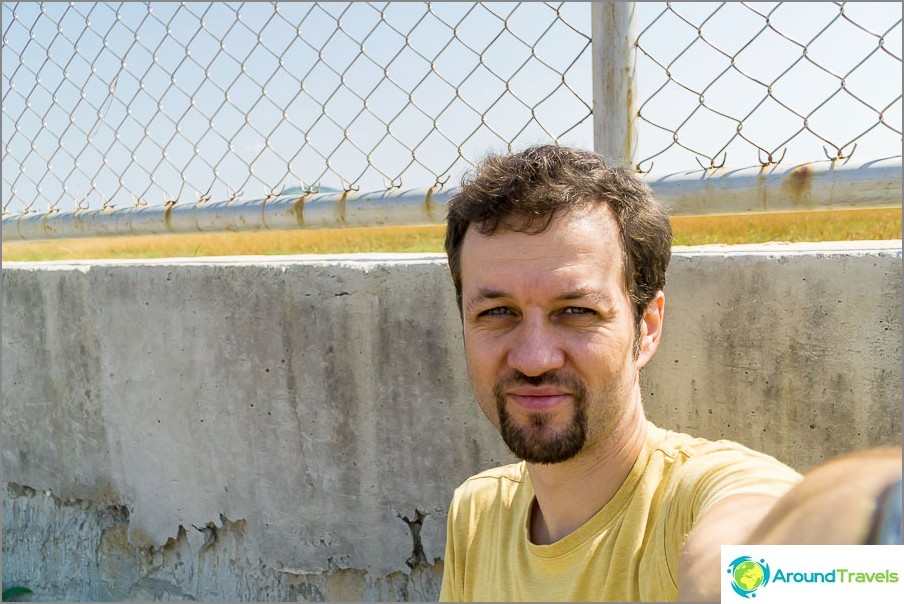 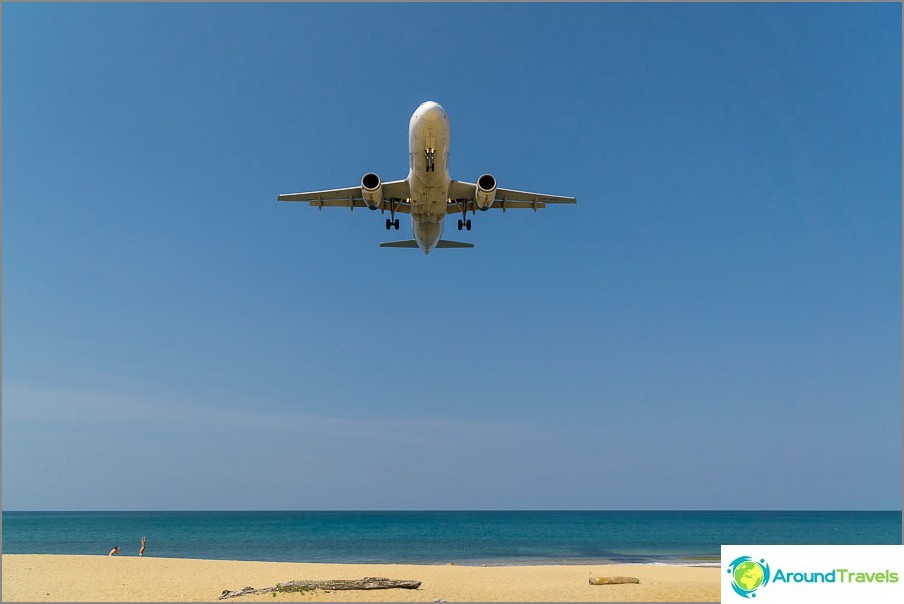 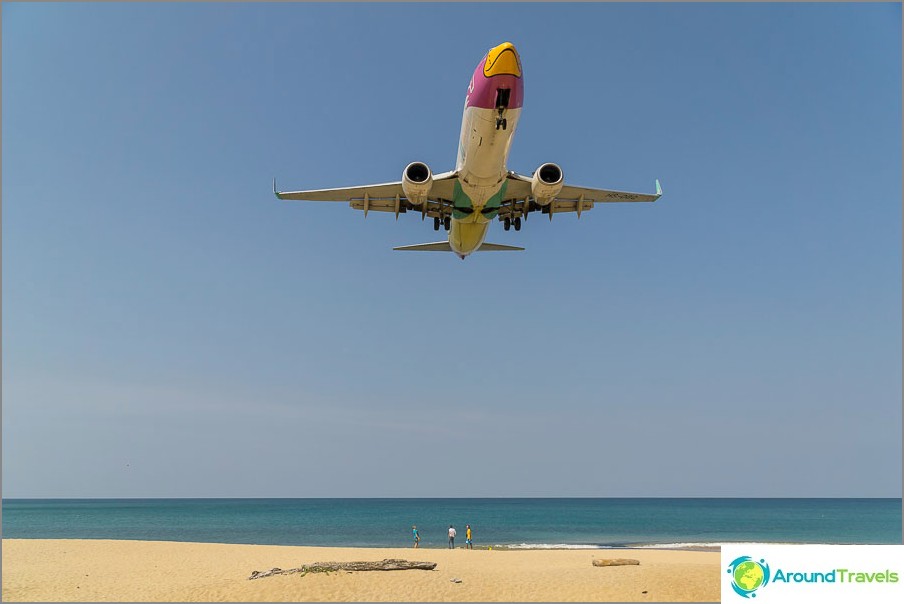 The earth shakes when it flies 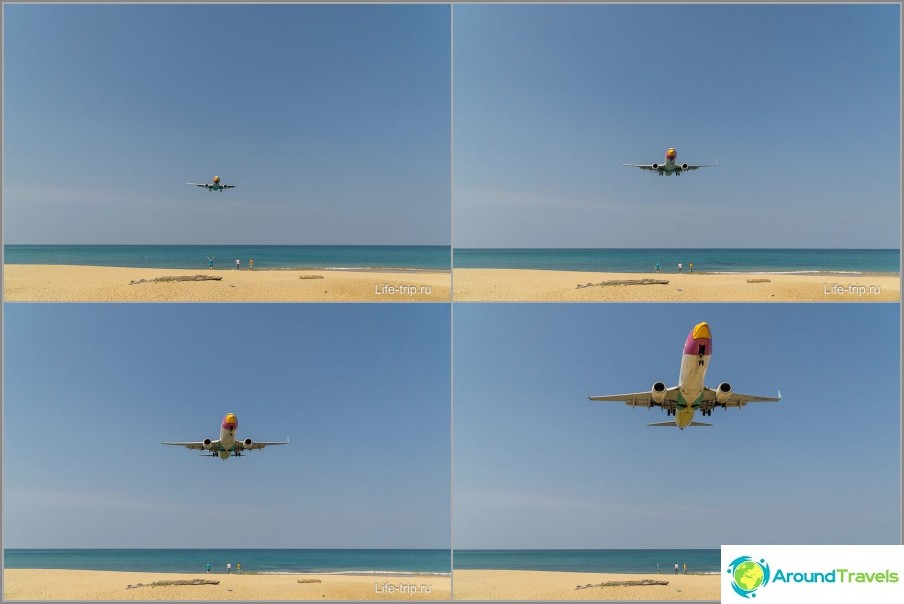 Beach with planes in Phuket

Will be on Phuket, go for sure. There and go just a short time on the beach, and it will be interesting if you have never seen anything like it before.

On the map you could see that near the shore andThe airport has a national park Sirinat. Usually in the national parks there is something interesting or at least beautiful: jungle, trails, views, mountains, waterfalls, and so on. But there is nothing in Sirinat, it is nothing. And what is strange, there is enough debris on its territory, what kind of national park is it then ... Visually it reminds just a small forest through which Thais are scurrying around on bikes and cars to do their business. Yes, there are a couple of places for picnics, but they look so-so. For me, it's better to go to that part of Nai Yang beach (to the other end of the beach), where there is no national park and no traffic. 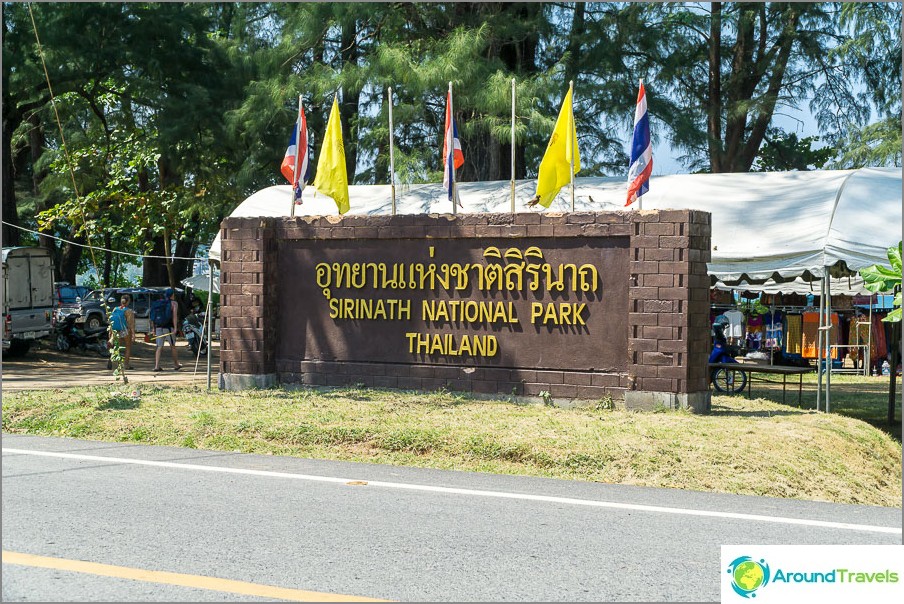 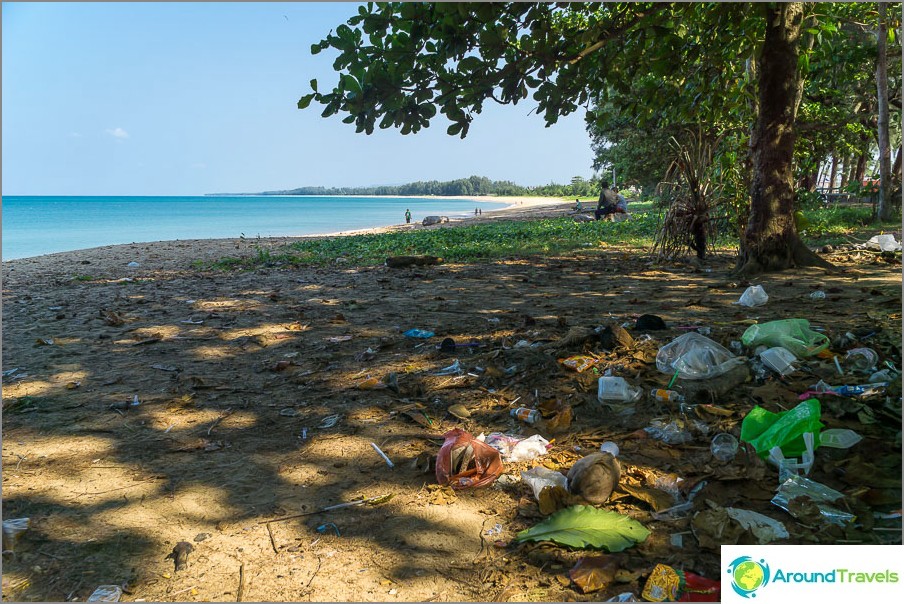 Beach near the nat park 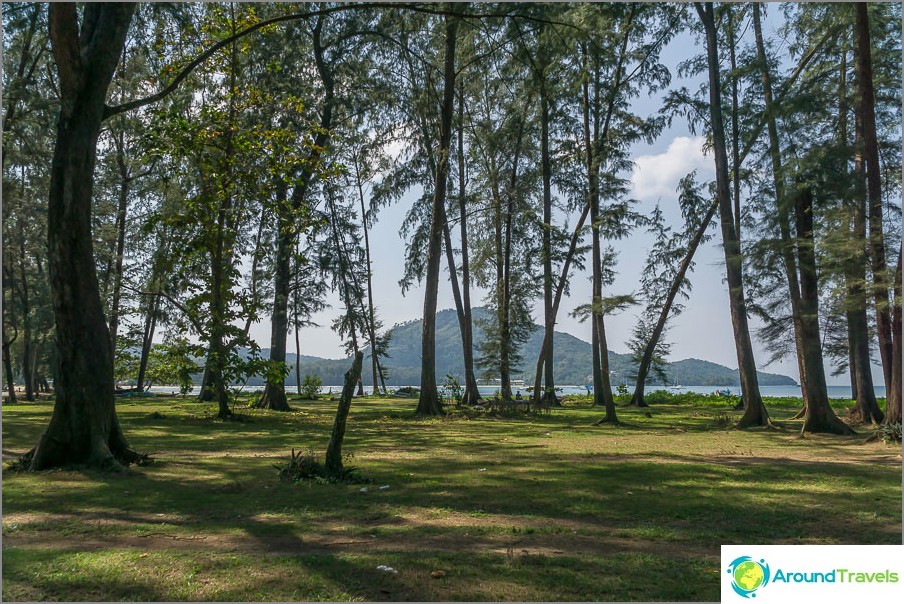 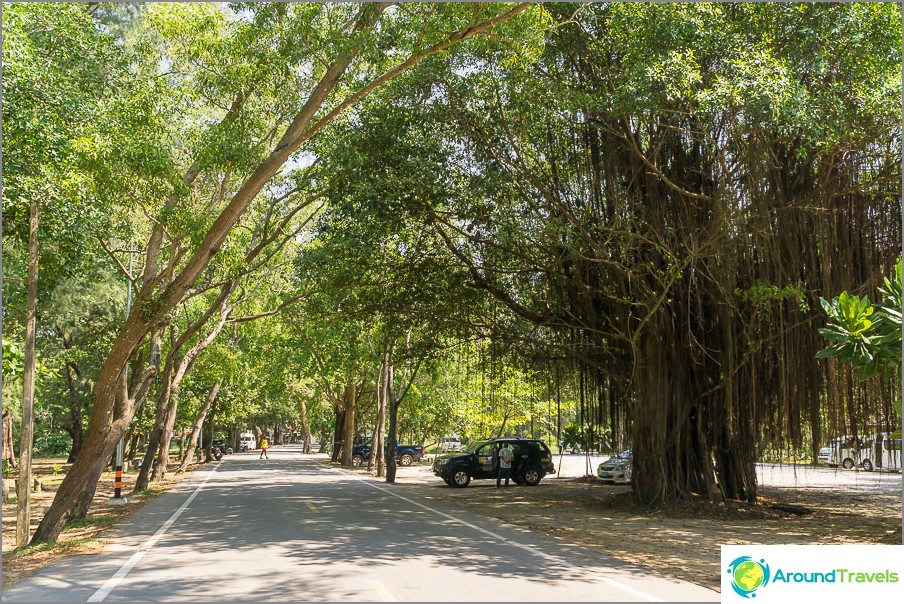 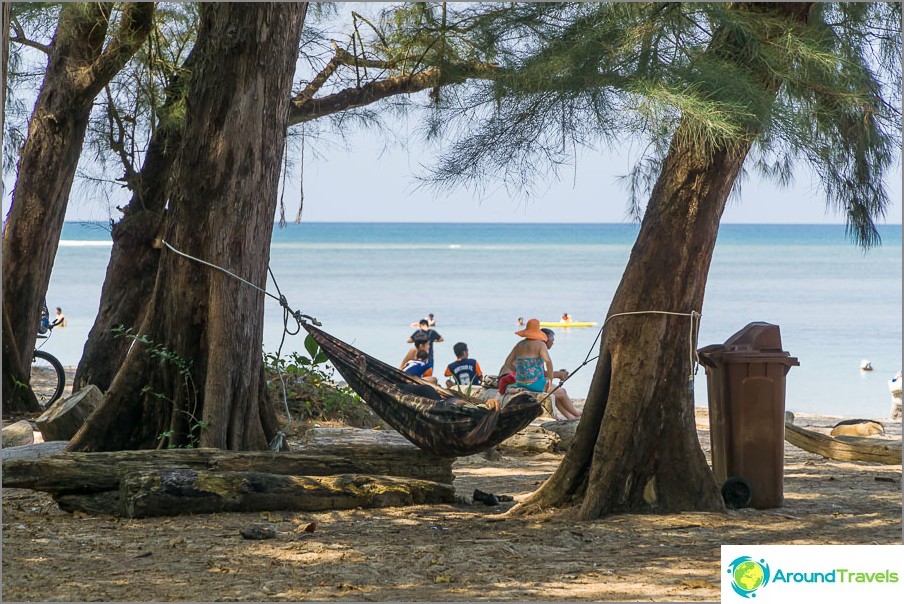 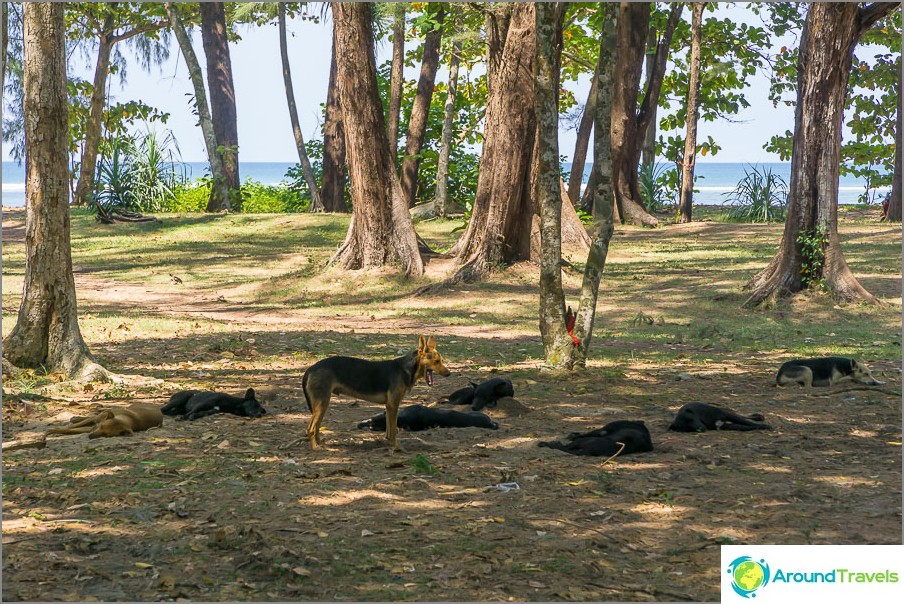 The dogs are also completely relaxed. 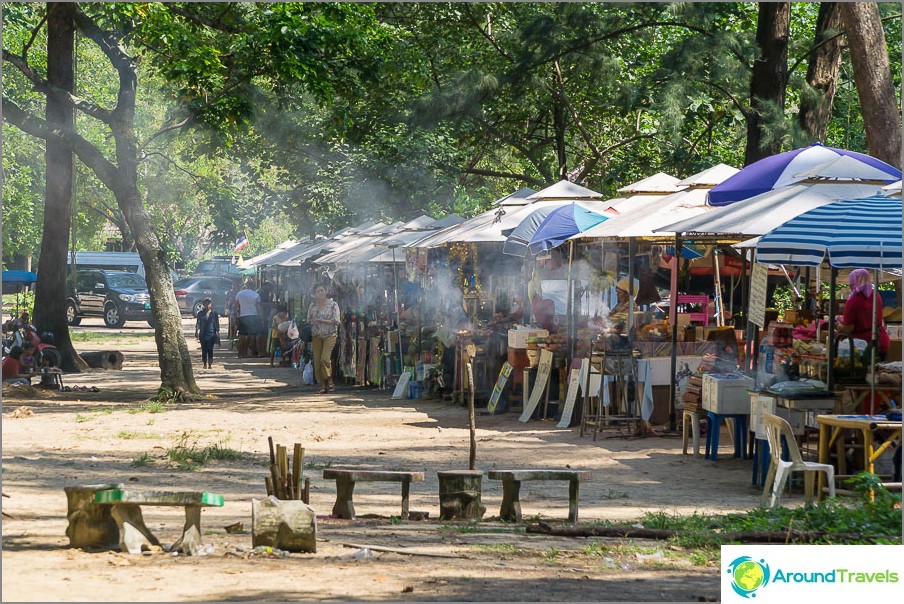 In nat park there are a lot of cafes with food 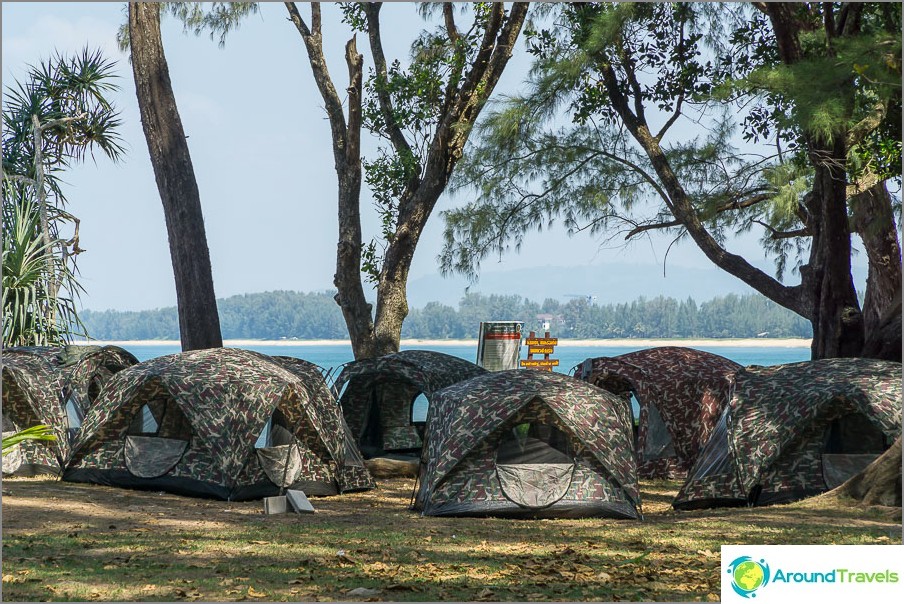 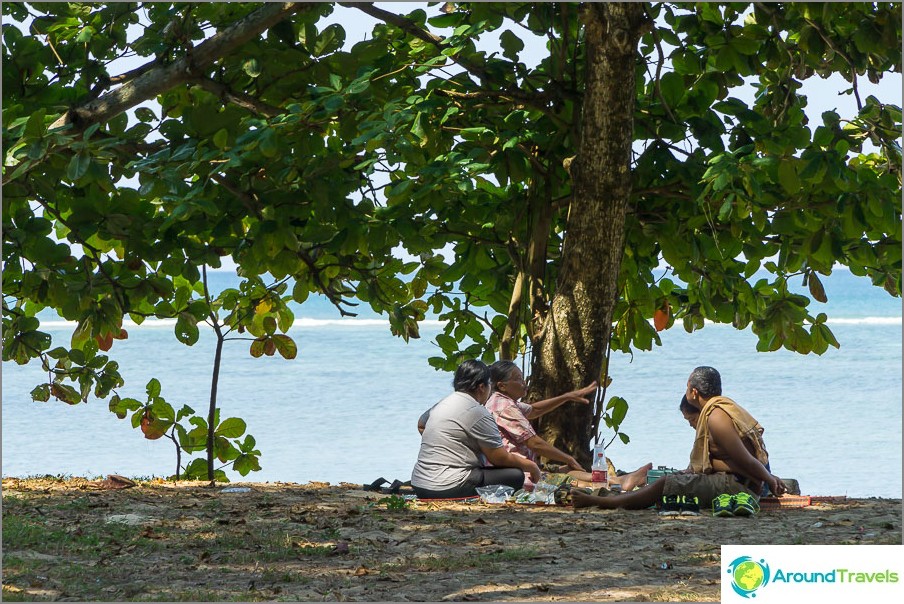 There are a lot of Thais 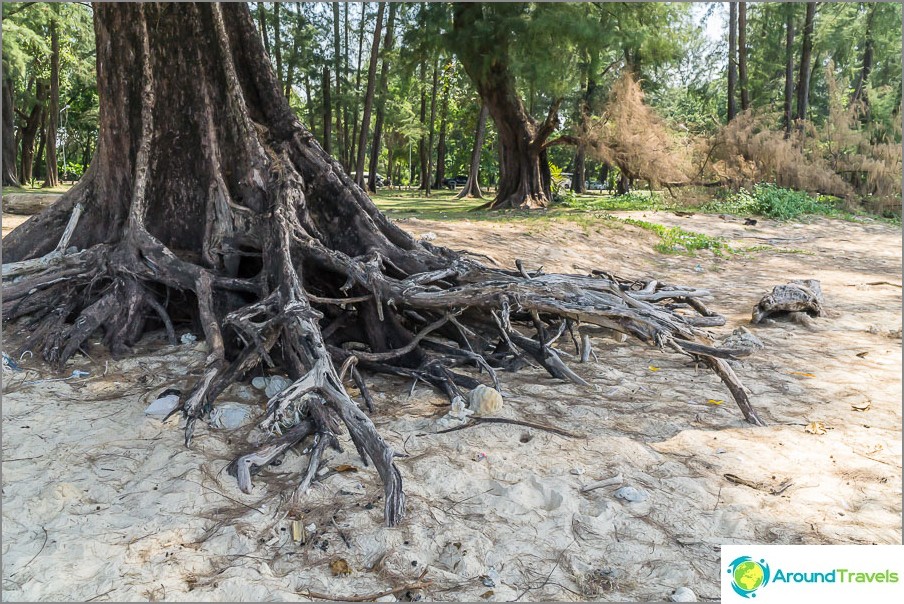 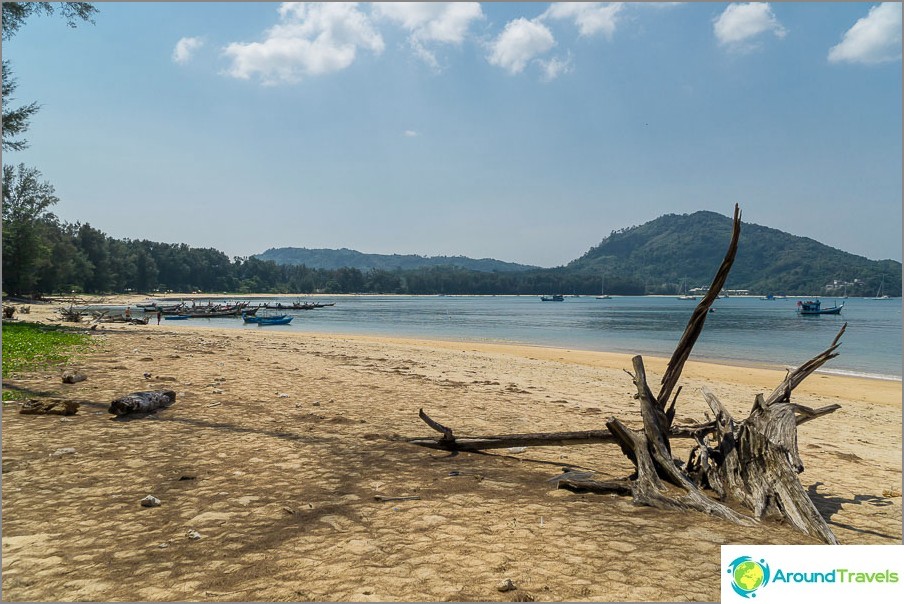 So in the nat park itself is not worth going. However, if you want to go to the beach with planes, then you will have to cross it.

Anyways, if you go from Nai Yang, then youYou will need to cross the National Park Syrinat. The fastest way to do this is in the northern part, where it is closest to the airport. The entrance and parking place will be approximately this hotel (according to the link you can see the name and location). Then it remains to go 1 km on the sand.

The entrance to the park is 100 baht. But they take, as far as I understand, only for transport, not from on foot. 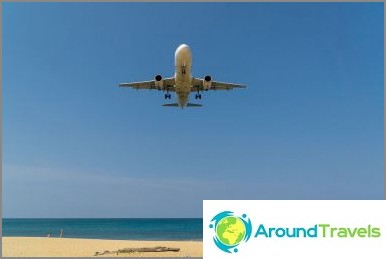 Bangla Road in Phuket - street on ...

House upside down in Kabardinka (inverted) - ...