Zoo in Dusit in Bangkok - as Egor fed sheep and giraffe

As I once wrote, I do not really like zoos. But changed attitudes towards them after Chiang Mai Zoo. He is there really good, ranging from diversityanimals, ending with the general size of the zoo and entertainment in it. Then I liked most a huge cage with birds the size of a five-story building, you walk, and birds fly around, I still remember.

Since it is necessary to attach Egor to the animal world,Do not go to the Dusit Zoo, which is a few kilometers away from home, a crime. Initially, I was counting on the level of Chiang Mai, but this zoo in Bangkok is smaller and simpler.

First of all, I wanted to feed someanimals and be close to them near. Looking at photographs from other people's reports, I saw what was there. However, if you go only for this, the visit time can be shortened significantly.

We arrived at 10 o'clock in the morning, and just startedheat. Whether therefore, or for some other reason, but all the animals insolently sleepy. And the most frustrating thing was that they could have huddled in the far corner of a cage or an open-air cage, and there they were not only a little boy, but also an adult, it was difficult to make out. Therefore, some of the cells covered with a double lattice and glasses can be skipped. Unfortunately, the zoo area here is not very big, so not everyone has open cages. 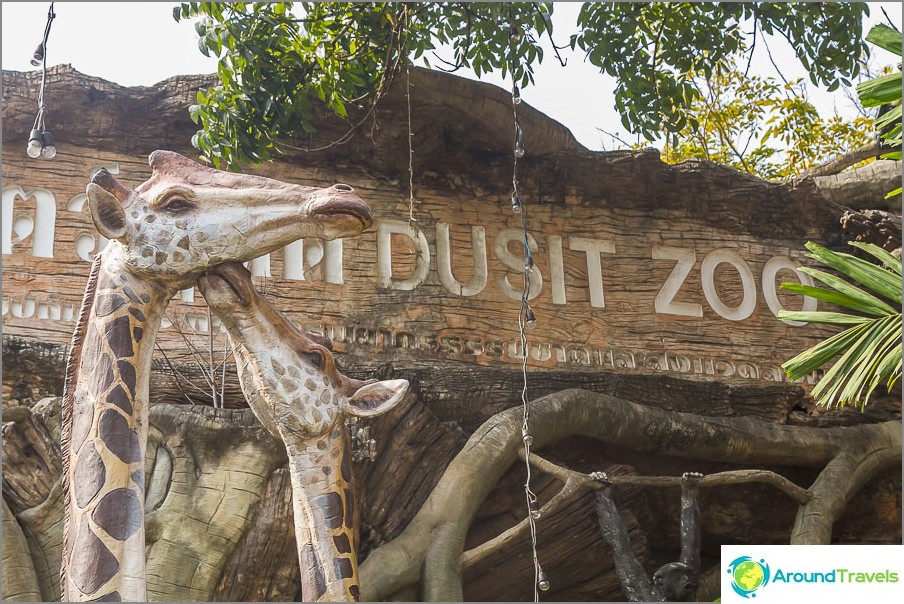 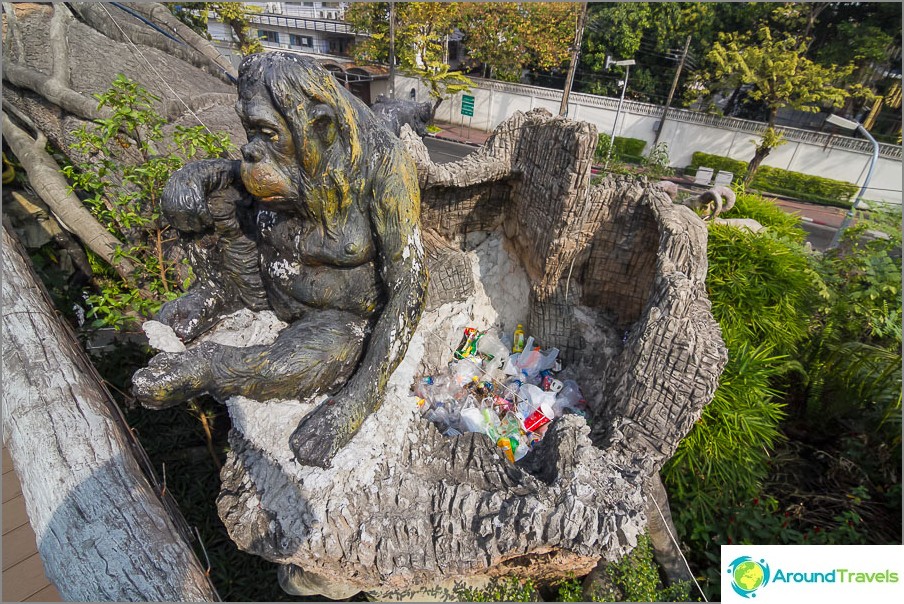 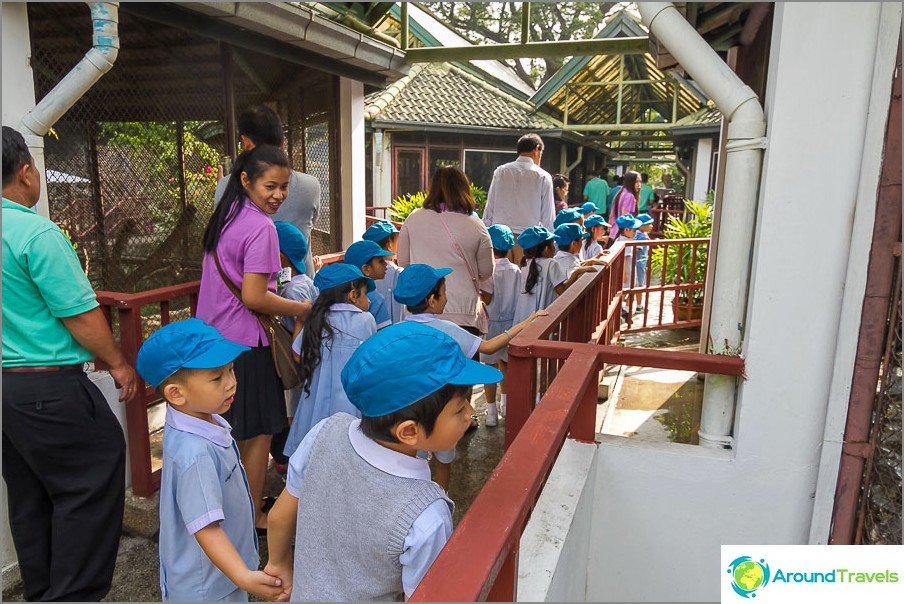 Thai kindergarten on the run 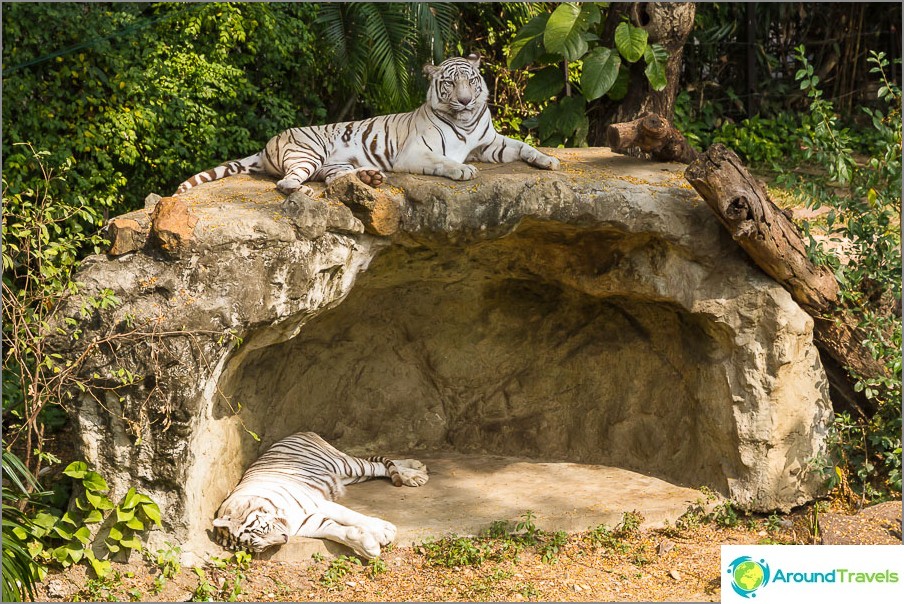 Tigers are on the way 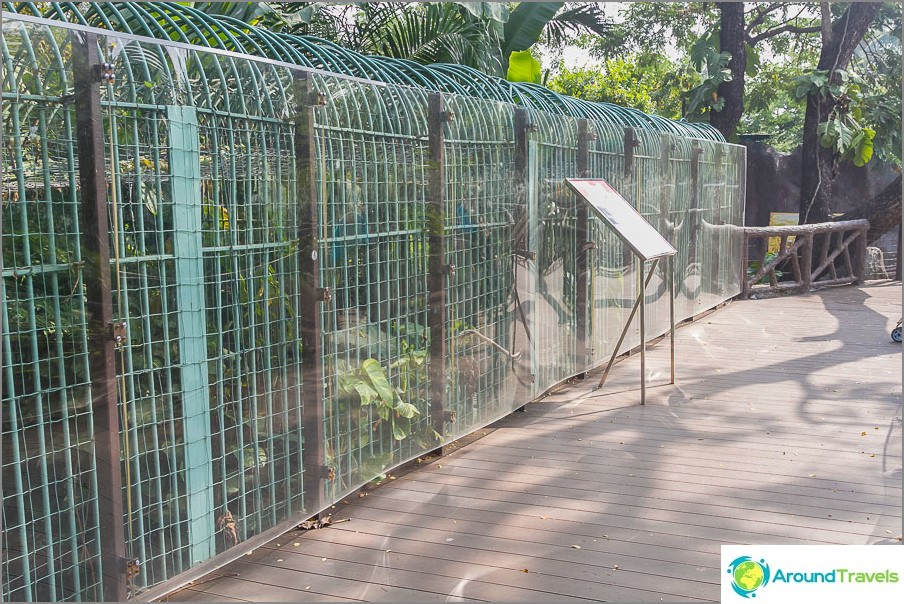 Double grilles and glare - can not see anything 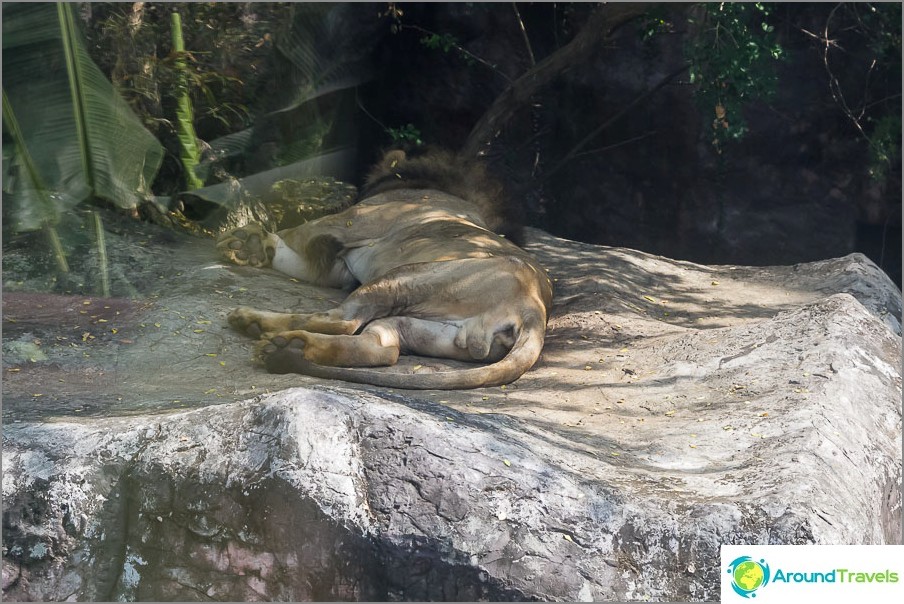 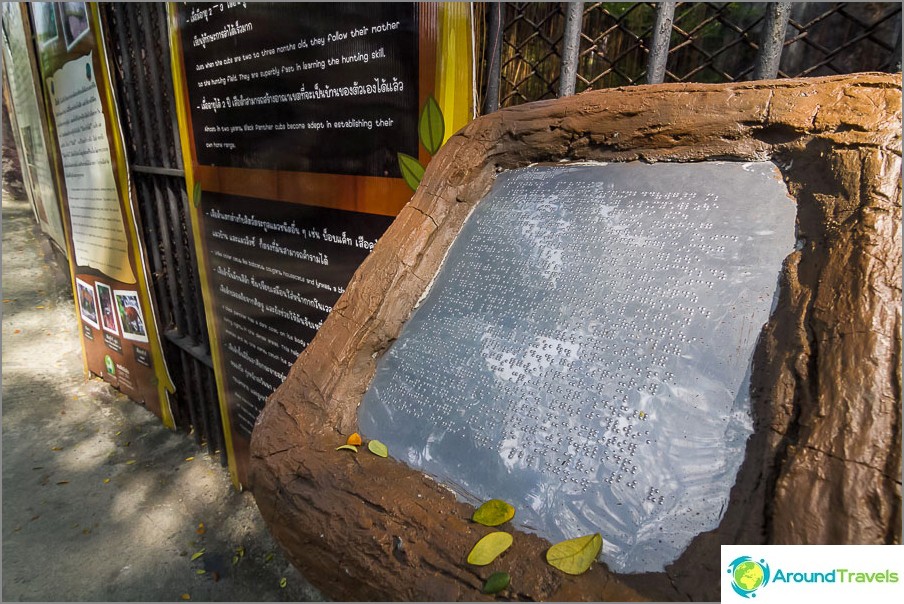 Nice, of course, but what for the blind blind to go to the zoo? 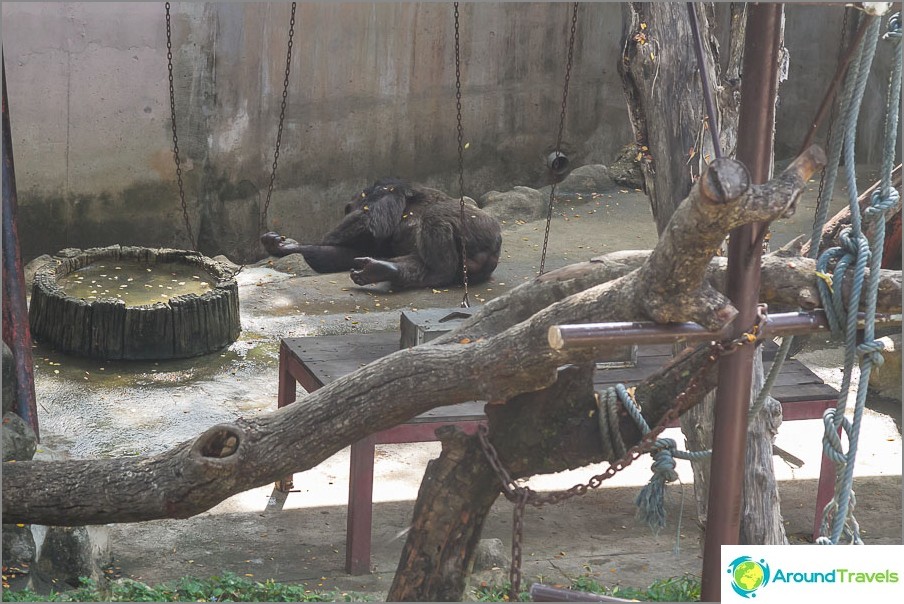 Gorilla is lying somewhere far away, merging with the background 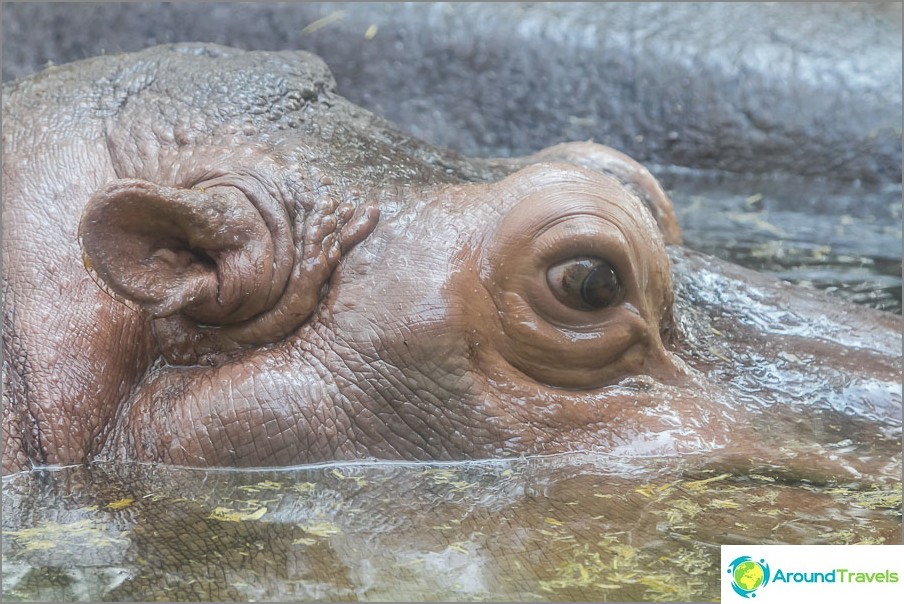 Hippo on approach through glass 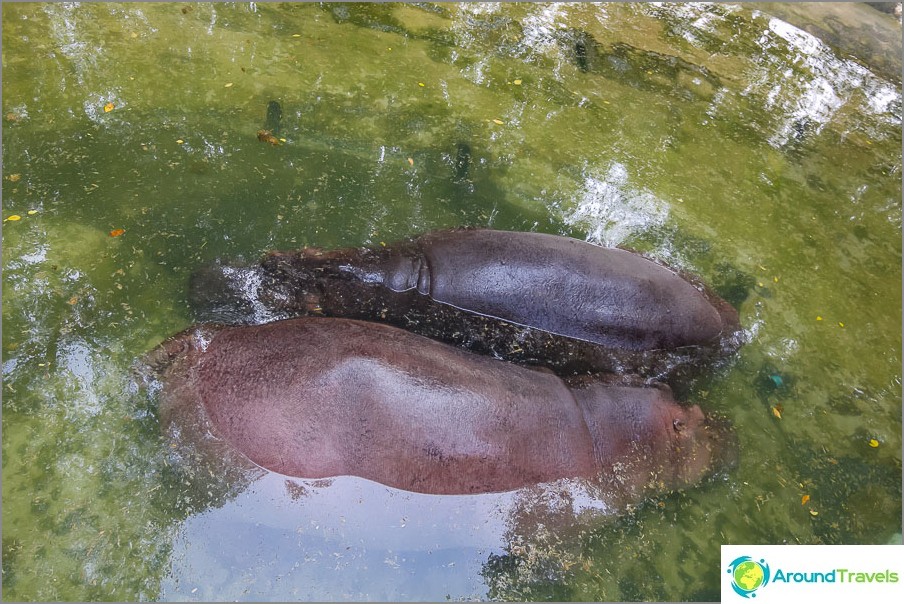 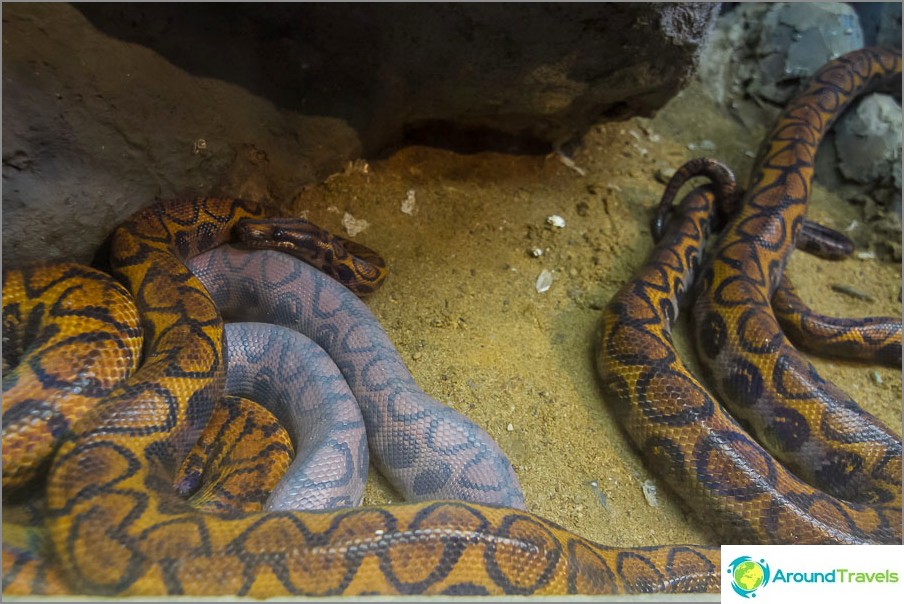 There is clearly something wrong with the snake 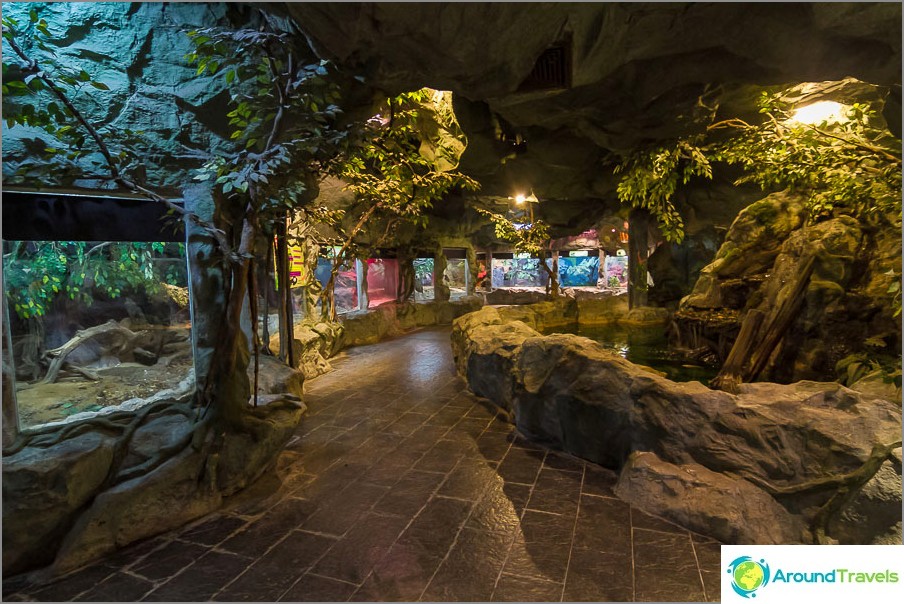 In the terrarium, you can escape from the heat - I work konde 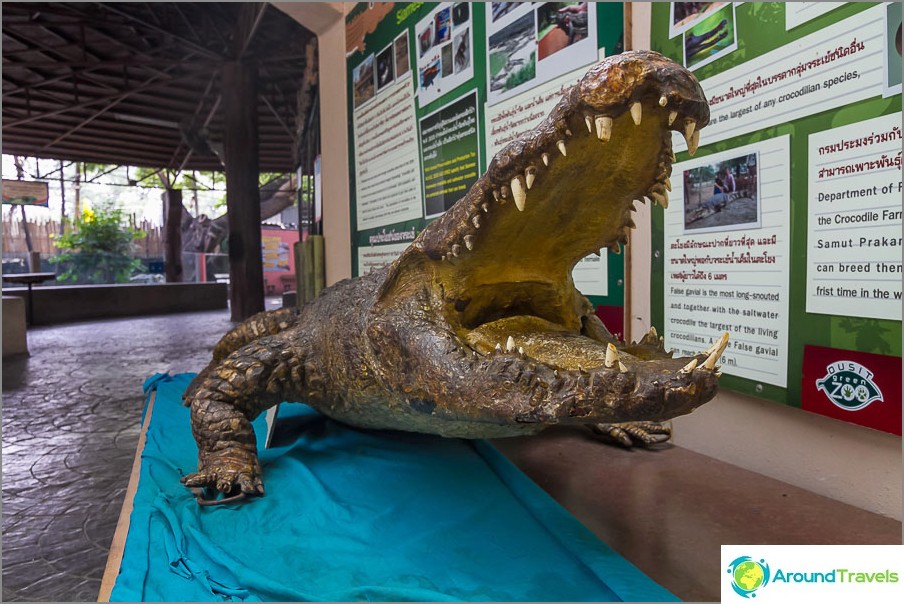 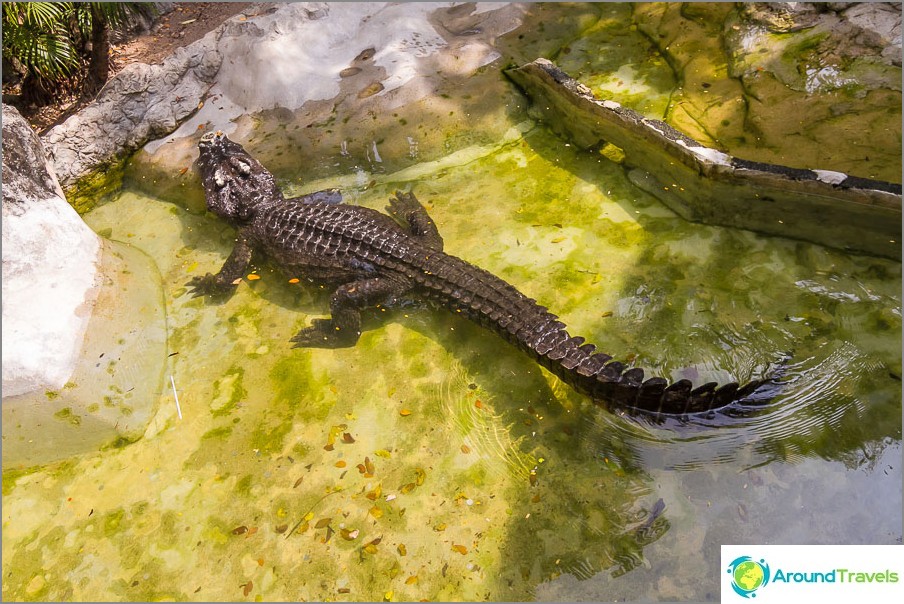 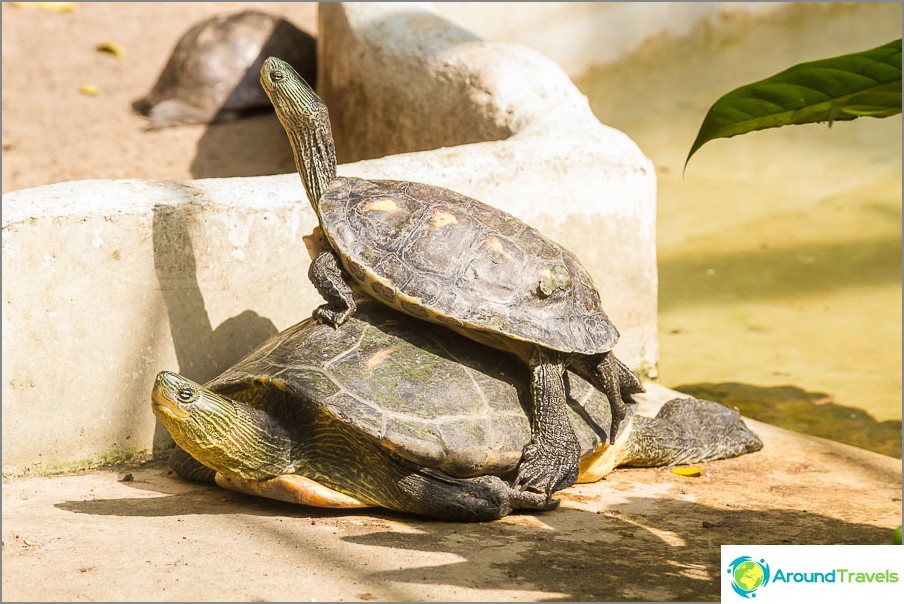 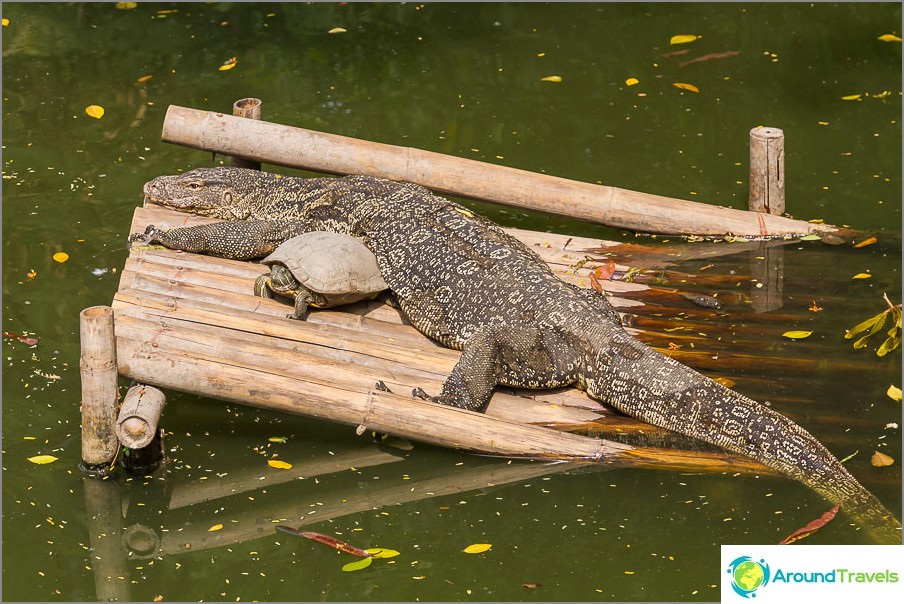 In the pond live turtles and monitor lizards 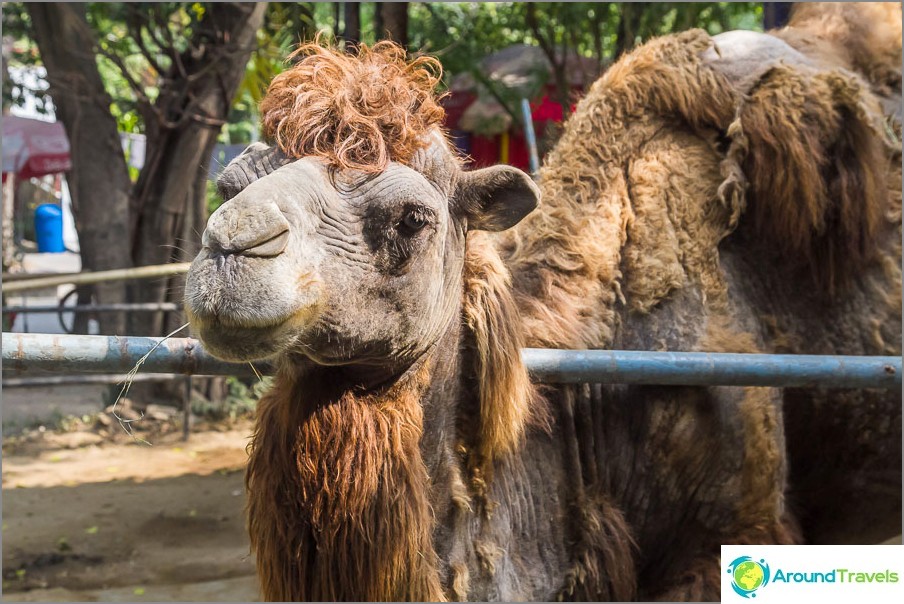 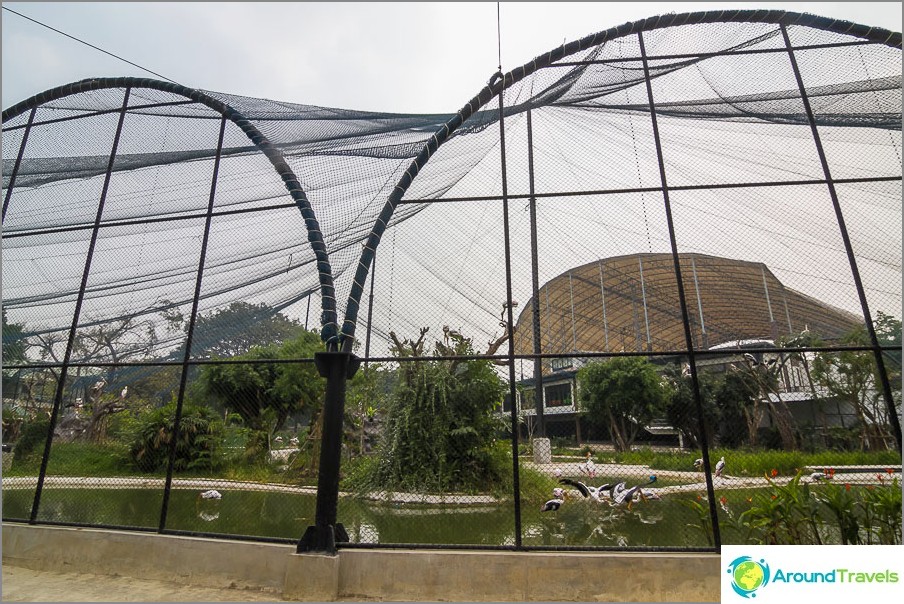 Pavilion net for birds, but there can not be 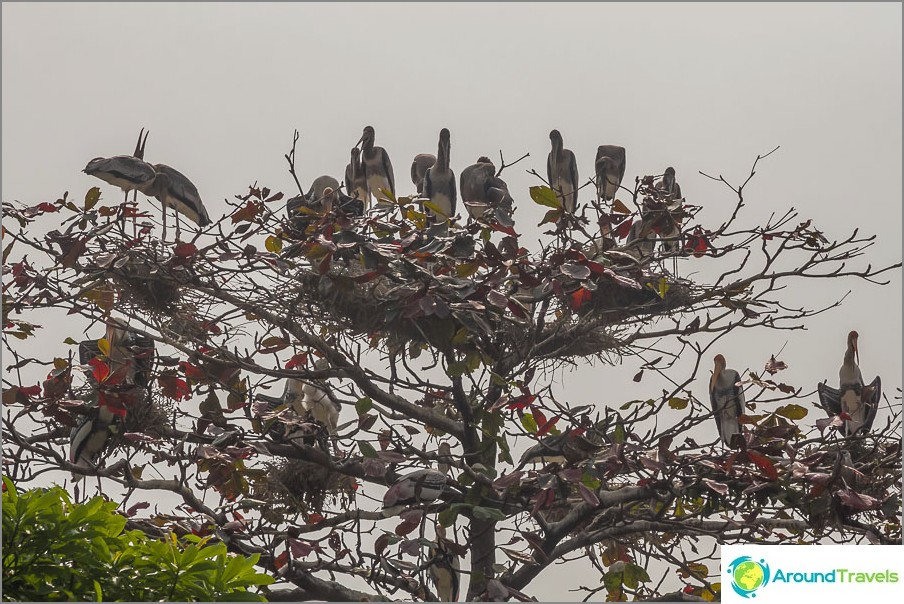 There are some big birds sitting on the tree.

Naturally, the photos I have, not allanimals that are in the zoo. Some I did not take pictures, I did not find others in the cage, I decided not to post others, because even so, the photos turned out a lot. So here is full of everything in the terrarium, there is a bird island (there are cages with birds), there are still elephants who temporarily went on vacation.

In the Zoo Dusit held a show with all sorts ofmarine life. It is free, children should like it. But we did not go. But then we went there and greeted the penguins. Yegor even wanted to tell them something, they are just his height, and they are suitable for dialogue.

The territory, as elsewhere in Thailand, is equipped with all kinds of flowerbeds, lawns and so on. Half the area, if not more, is occupied by a pond. Not without store 7-11 and food court. Yeah, where are the Thais without food, immediately disappear. 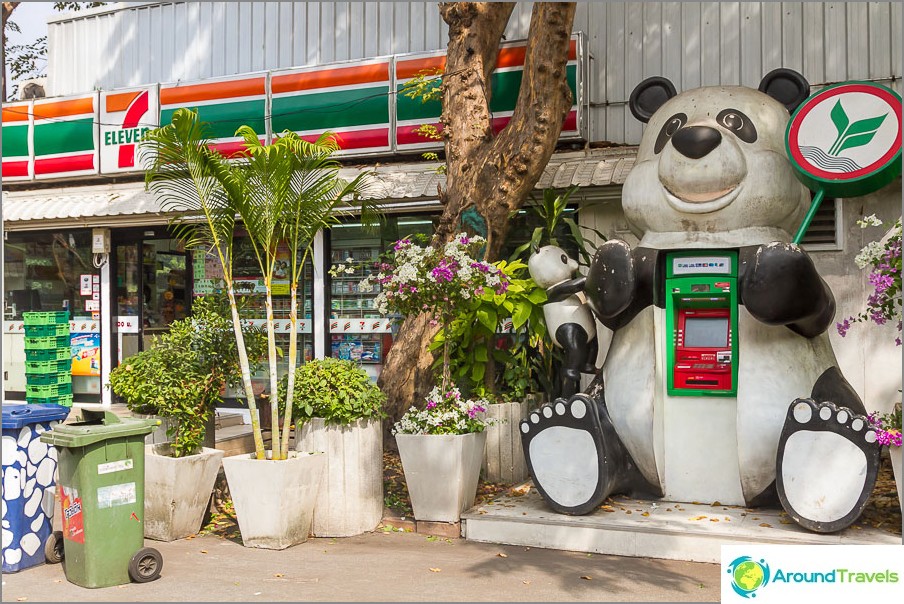 Ubiquitous 7-11 and ATM in the form of a panda 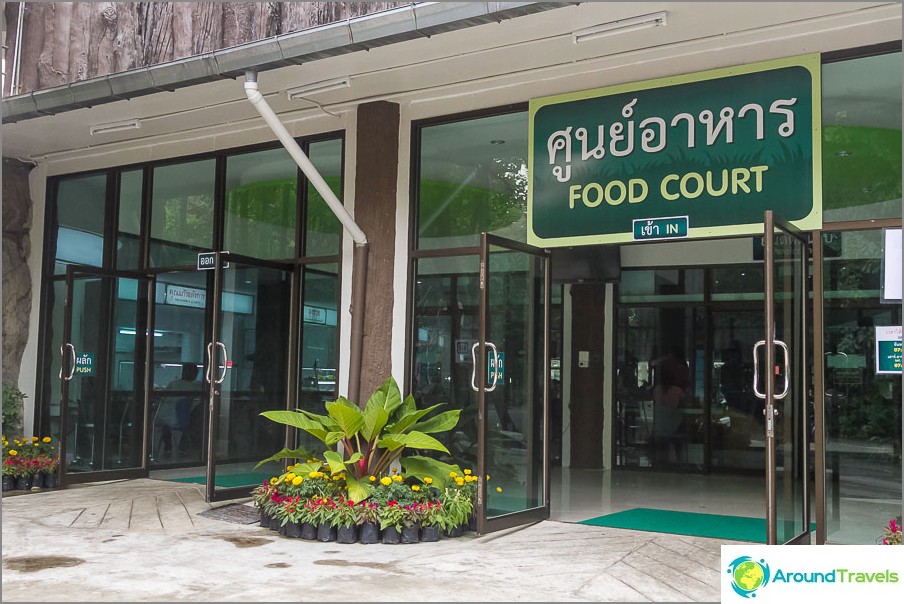 Well, of course, where without foodkort 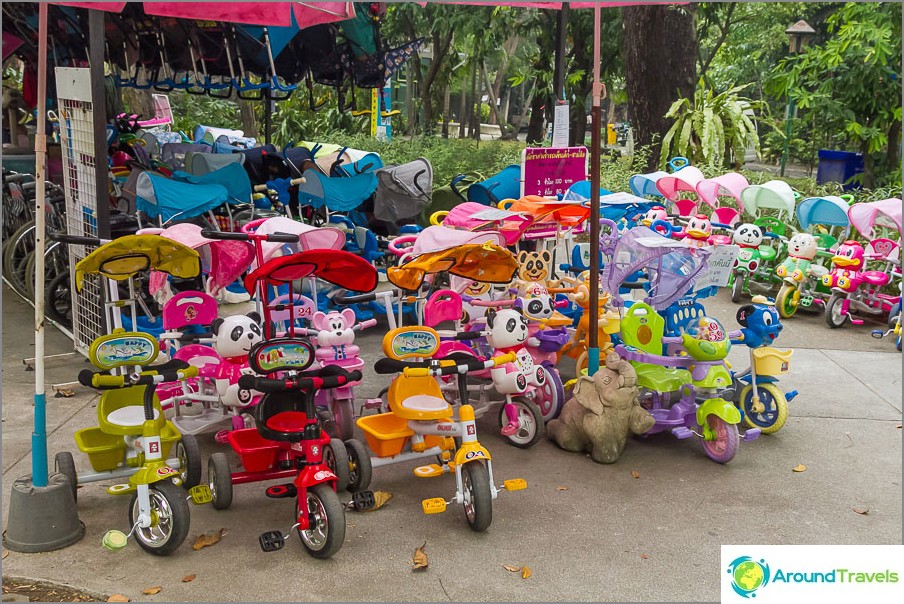 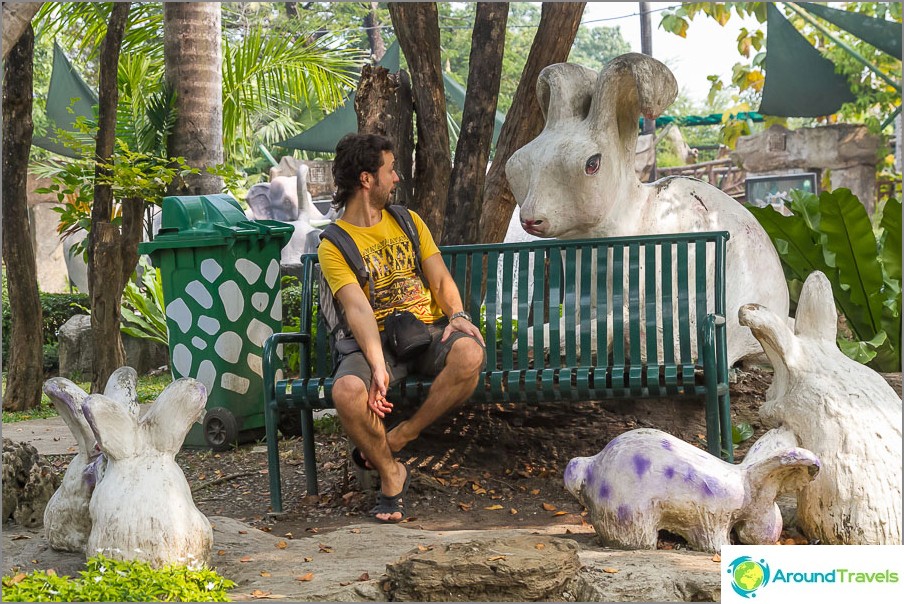 You sit on a bench, and here once a huge rabbit with red eyes 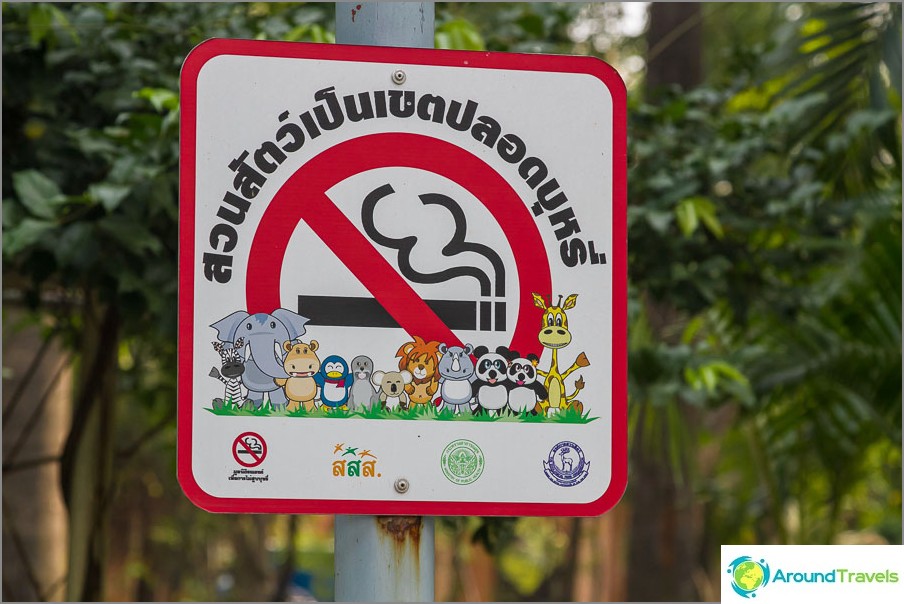 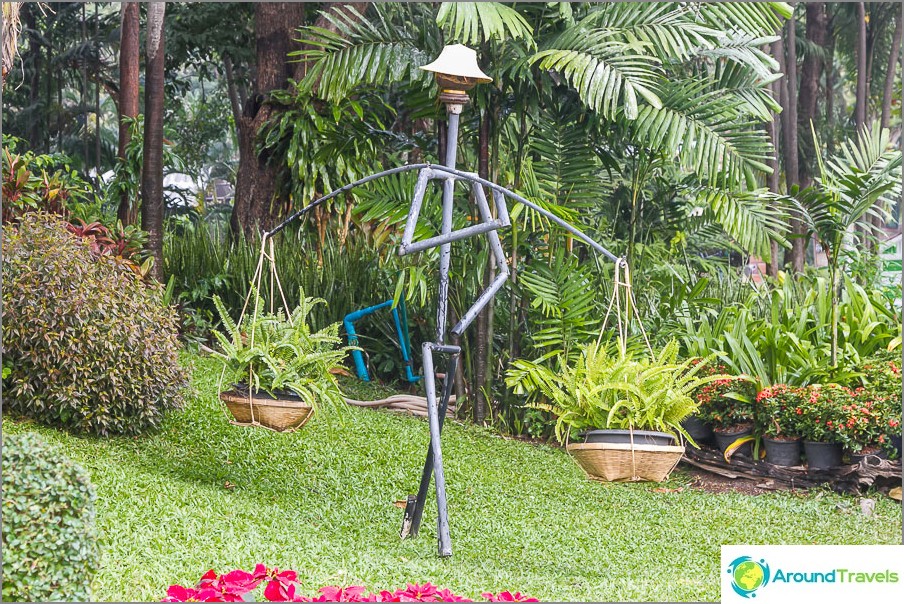 We already thought to be upset, but we came across sheep who could be drunk with milk! Here it is some happiness! Yegor, the truth did not share this joy at all, and was afraid of them, like the Usurian tigers.

Then we found a cow! She moaned and approached to muzzle her face to the fence. The big one is so terrible, here we were already afraid with Yegor. AAA! 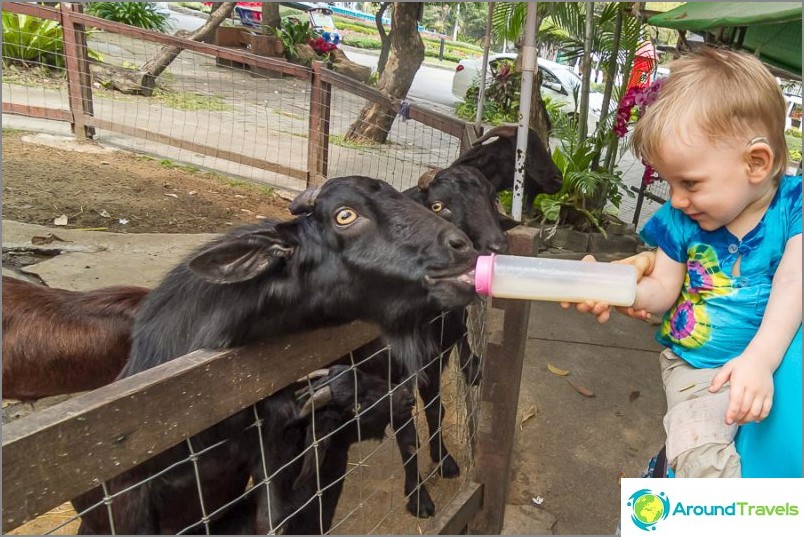 Although nothing seems so scary 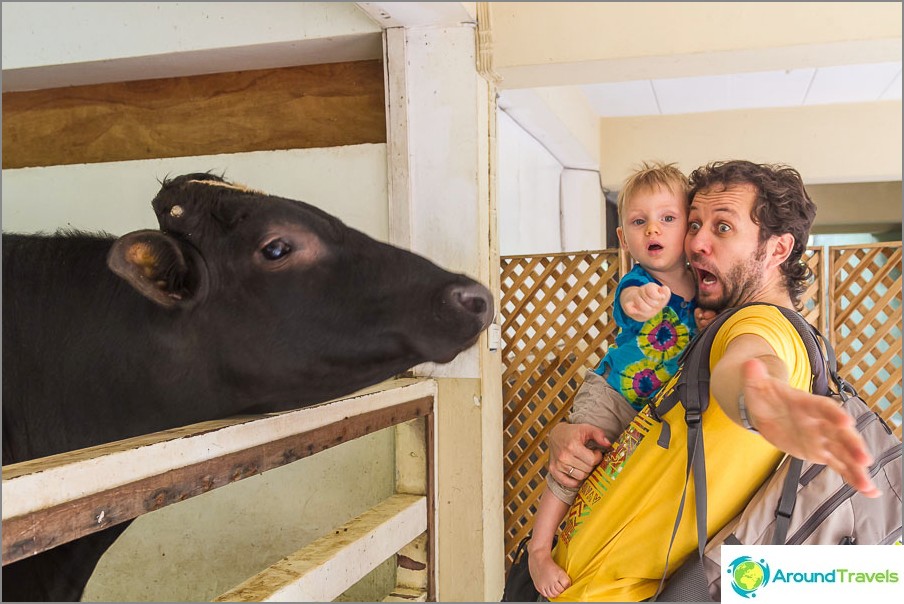 But the most important thing was at the end - giraffes! Even not so - giraffes! They are so huge, you can put them near the house, and feed them from 2-3 floors. Convenient as! Fortunately, before leaving the zoo, we saw that they were being fed because they had already passed by somehow, but somehow they wandered far away without interest. The feeding time is not written anywhere, literally five minutes earlier left, and would have missed.

In general, we fed them a bucket of carrots and someclearly tasty green stalks. Have you seen the giraffe tongue? Yes, he is like a long neck; instead of a scarf they can wrap themselves up or catch flies at a meter distance, all the frogs would envy. Really, you stretch the carrot to him, and he will pull out his tongue, as he grabs. You do not expect at first, you want to put it right in your mouth. 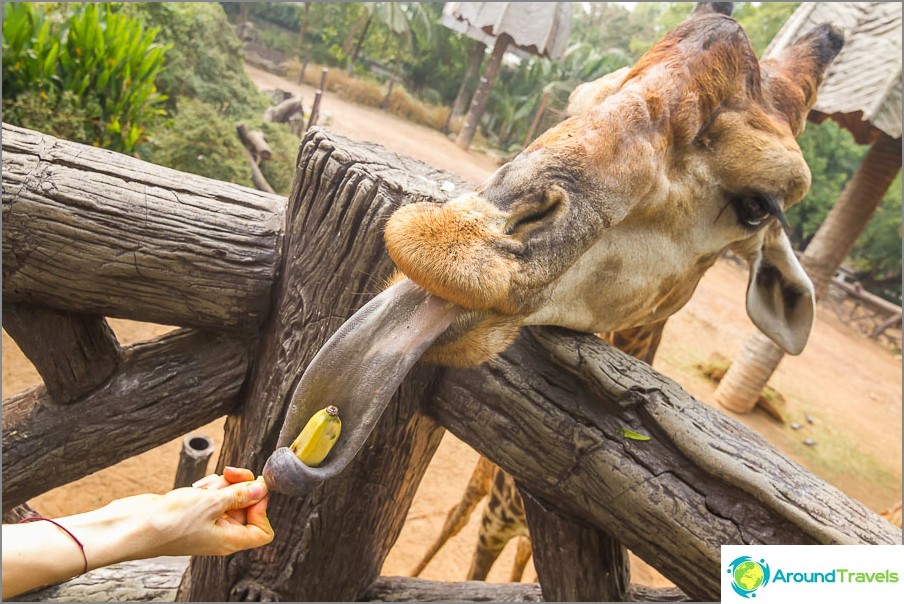 In general, lambs and giraffes gave us the seaimpressions, and we were pleased with everything. They say that there are still hippos you can stroke and feed, but they did not even pay attention to us. But in general, in the future I want to go to the contact zoos, they are more of a sense for the child, according to the type of Paradise Park on Samui - few animals, but you can touch everyone, nothing extra, so to speak.

Entrance is 100 baht, children 50 baht, small children up to 3 years old are free.

The metro is not near, near Victory Monument, from it go in a straight line and without turning anywhere 2.7 km. We took TaxiIt cost 50 baht, and we did not drive from the monument, but a little further. So there is essentially to sit down and get out in a few minutes if there are no traffic jams.

If you want to find a hotel in the center, it is convenient to choose accommodation at RoomGuru, is a service where you can compare prices for hotels in different booking systems.

I have stayed in Bangkok many times and in different hotels. I will not give links to all my reviews, I will give only a few. Nasa vegas - convenient for stopping near the airport and metro, Rajata - a good place to spend the night near Khaosan, S3 residense located in the center near the park. 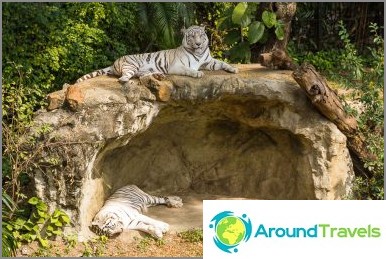 Tablets and bracelets from motion sickness in transport ...