Guan Yu Sanctuary on Samui - a place where generations communicate

This landmark appeared on Samui notso long ago, and at first was perceived by the guests of Koh Samui just as another Chinese temple. Moreover, the temple of non-standard architecture and incomprehensible composition, where there are many steps, a strange red-faced head on a pedestal and when visiting this place there remains a feeling of some kind of incompleteness in general. But with a detailed study of the issue, one can learn that the idea of ​​this temple has a deep meaning, and the unfinishedness is quite explicable.

Guan Yu Sanctuary was conceived not just asa place to worship the god Guan Di (this is the same uncle with a red face and a green robe). Everything you see here is built on donations from Thai descendants of people from Hainan. Hainan, as you remember, is the southernmost island of China, it is also a resort and a province in one person. In the 15th and 16th centuries, the first Hainan immigrants began arriving on Samui, who were not met with such hostility, as it happened in other countries next to China. So that you understand the depth of the centuries, I remind you that at the same time Yermak conquered Siberia and annexed it to the Russian state.

Hainan caught on Samui, which in thosetimes, there was a rather isolated and self-sufficient community that had little contact with mainland Thailand. Were familiar with the local population, gave birth to children, and in general began to feel much better than in Hainan. But in order not to lose the link of generations, and not to forget about their roots, rich descendants decided to create a place on Samui that would combine both the sanctuary, the cultural center, and the malls. Practical and with meaning.

Guan was chosen as the god of the sanctuary.Di, he's Guan Yu. By the way, quite a real character, a respected Chinese military leader, who lived in 160-219 AD. Despite his valiant and faithful service to the emperor, he was unjustly accused of a crime, and executed with his son and squire. However, over time, his name became overgrown with legends, Guan Yu himself was credited with feats and inhuman characteristics, gradually canonizing a person, and translating him into the ranks of the gods of China. For example, the red color of his face is explained by a fairy tale that he smeared his face with red clay from a river in order to pass by an unrecognized guard who was looking for him for killing some unfair and greedy judge.

A little more than a thousand years after his death,Guan Yu became the god of war, the god of rain, the god of something else, and, well, the patron saint of many professions. He is worshiped in different religions of Asia, thousands of temples were built in his honor, where Guan Di always stands in green clothes, with a red face, with his son, a squire and guan-tao in his hand. Guan Dao is a pole with a sword at the end, as legends say - his personal invention. 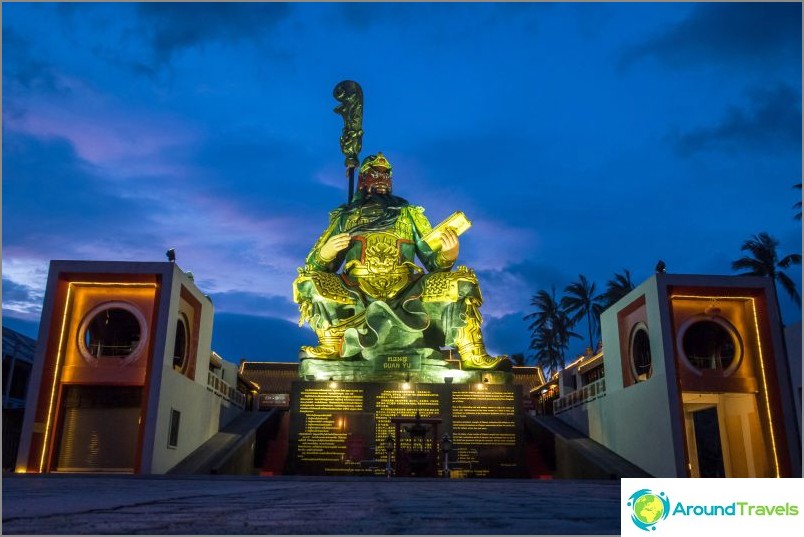 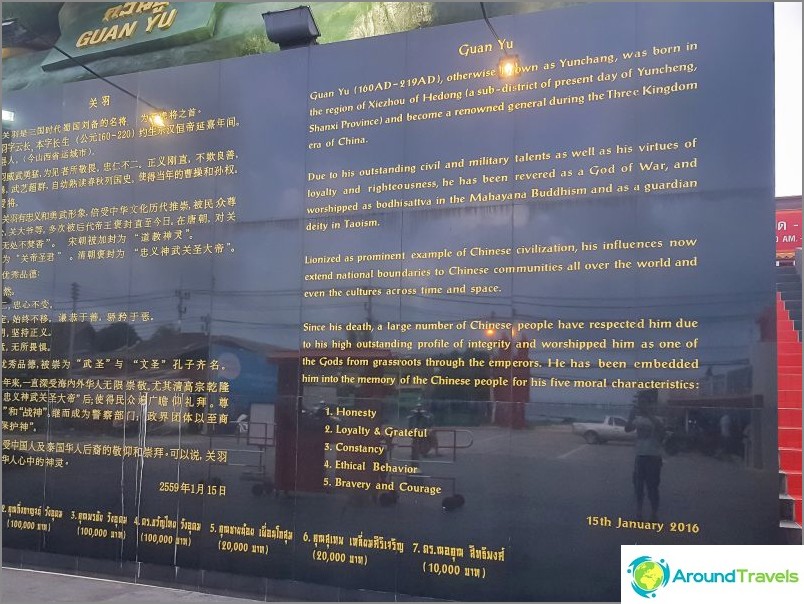 As for the cultural center, you will find it.behind the huge statue of Guan Yu. The statue appeared in 2016, instead of a lonely red head, which lay there for many years, scaring and admiring passing tourists. Immediately after the statue will be a small chapel, and now after it, in the building with doors, which depict the Chinese gods, the Guardians of the Doors, there is a large room with high walls. These walls are hung with photos of people. You will be interested to know that all this is just people. Not some heroes of war or labor, not representatives of rich families, but simply people. Parents, grandmothers, grandfathers, great-grandmothers and great-great-great, in general - the ancestors. All these photos were brought by the inhabitants of Samui, whose history is being conducted from the moment their Hainan ancestors arrived on the island.

The idea of ​​a cultural center is to make peopleshared their photos, letters, notes, in short - everything that will help future generations come here, see, listen and touch. In addition, the center is supposed to open a school of Chinese (Mandarin) language for children. Wedding ceremonies are held here, the truth is not free, but all the proceeds go to the further development of the sanctuary. After all, behind the entire building there is still a vast wasteland, where it is planned to build a shopping center, through which you can move on golf carts. They, by the way, have already been purchased and stand-gathering dust on the outskirts of the Guan Di Temple. 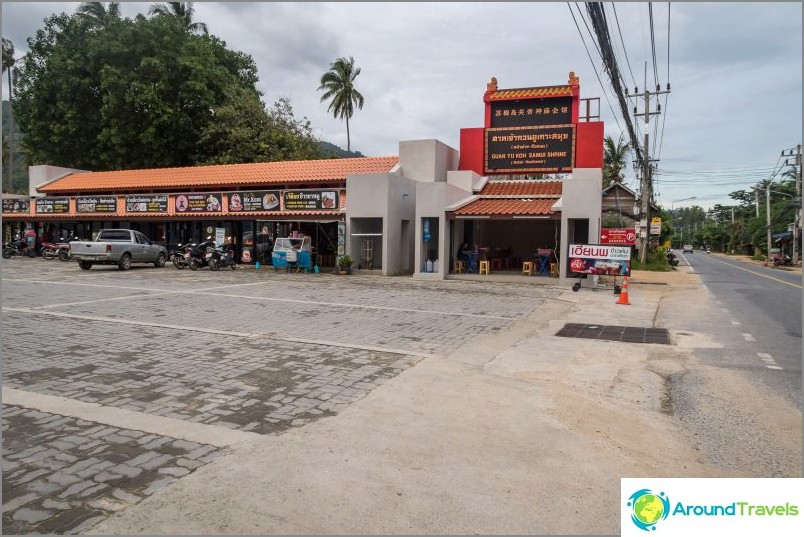 Stella with the name of the place, and part of the parking lot with shopping malls 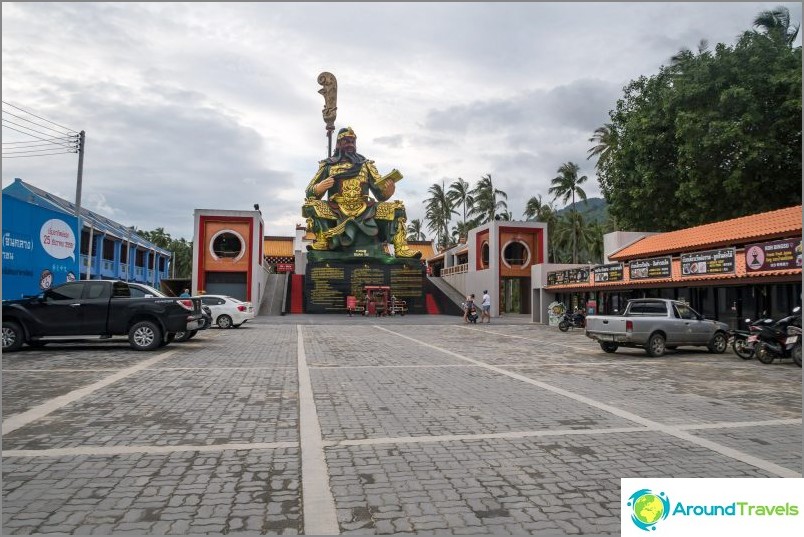 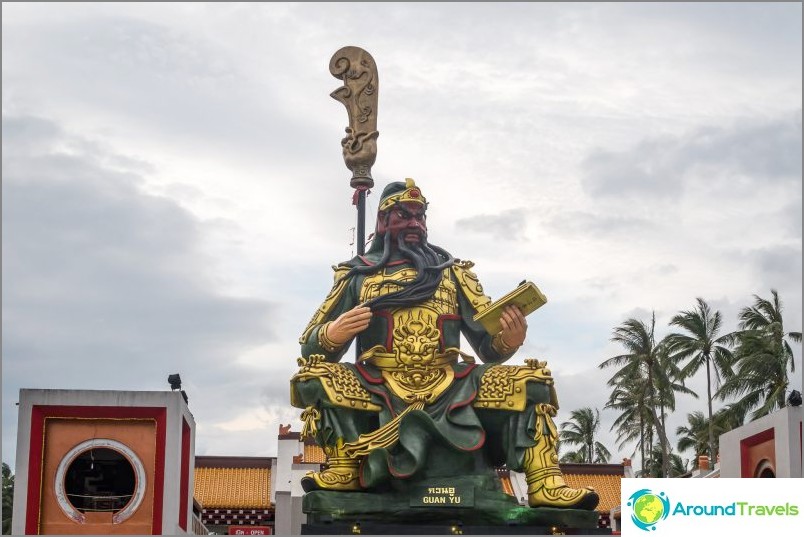 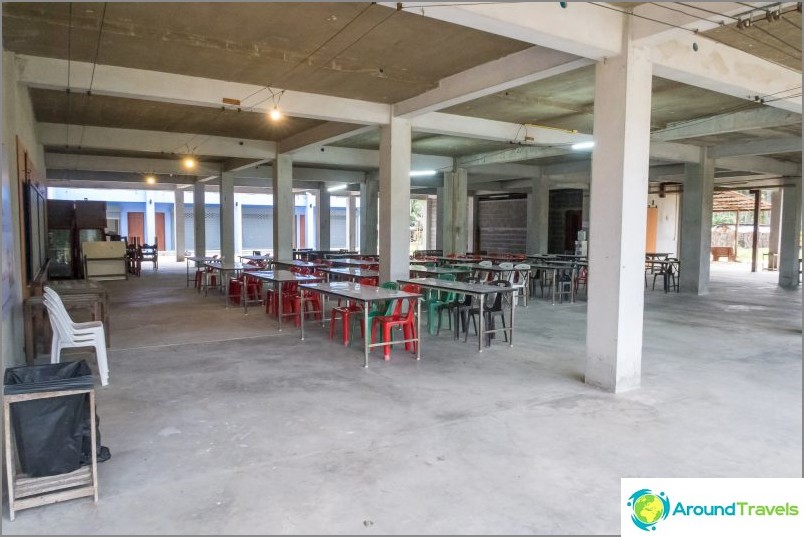 The lower part of the building is designed for meetings and meals of the community. 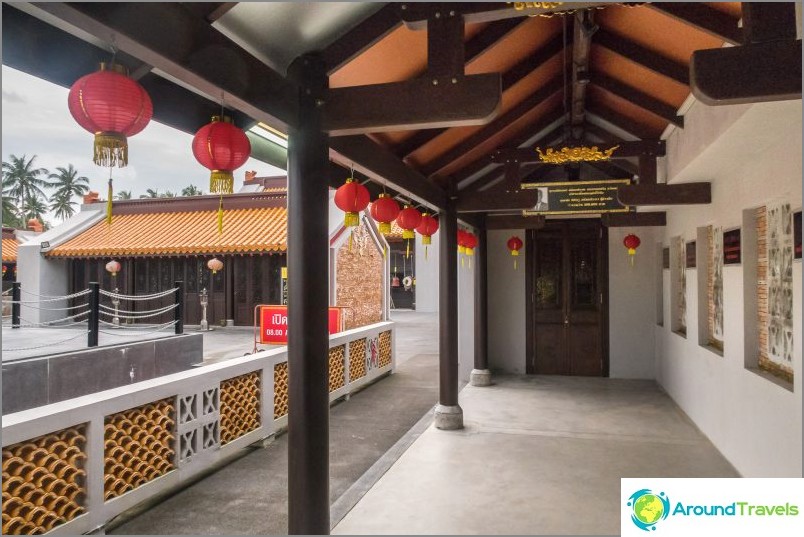 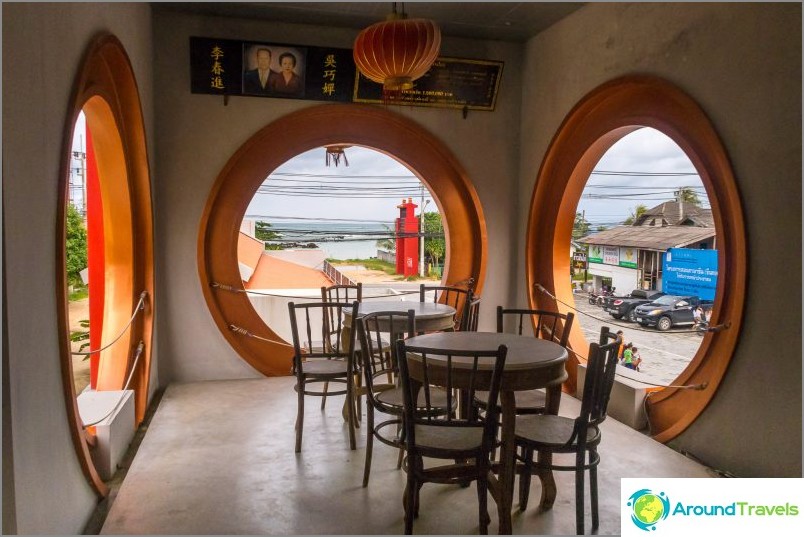 Not yet operating tea rooms 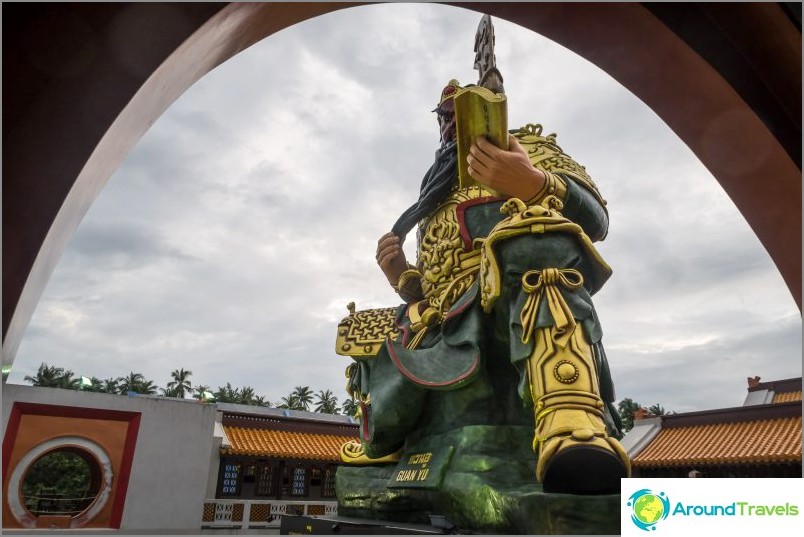 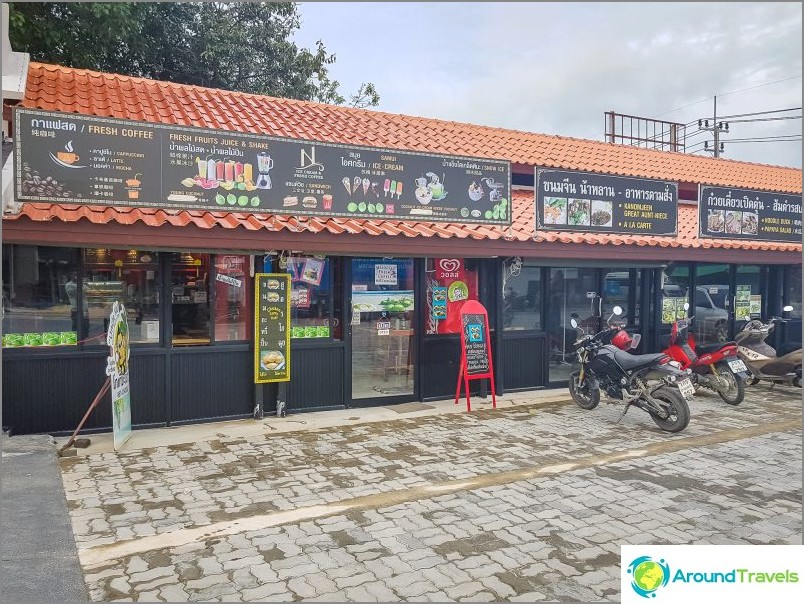 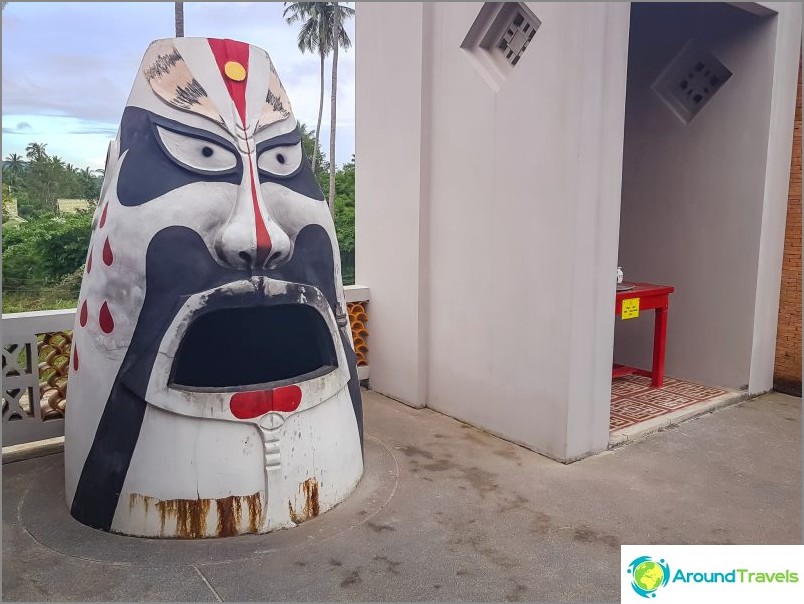 Oven for burning garbage, all scraps of paper after the holidays 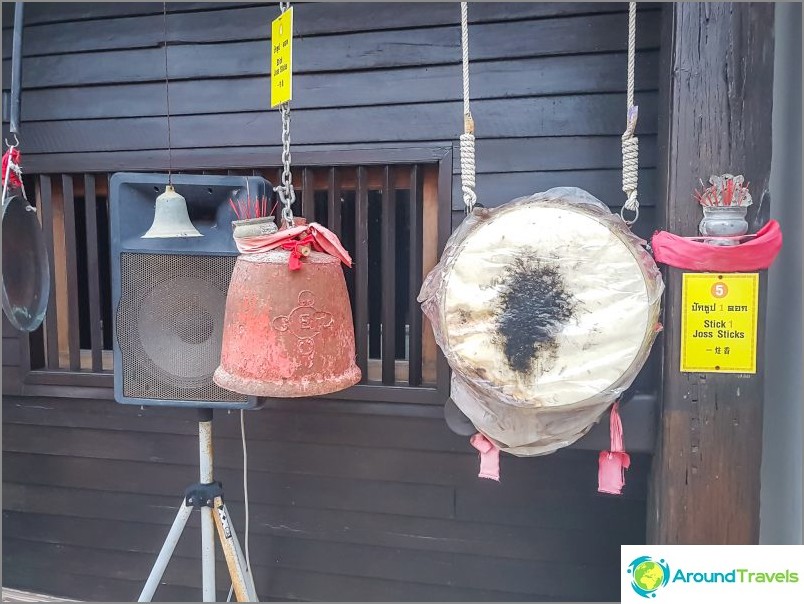 Ritual gongs, people walk, pray, knock and ring, and only then go inside. 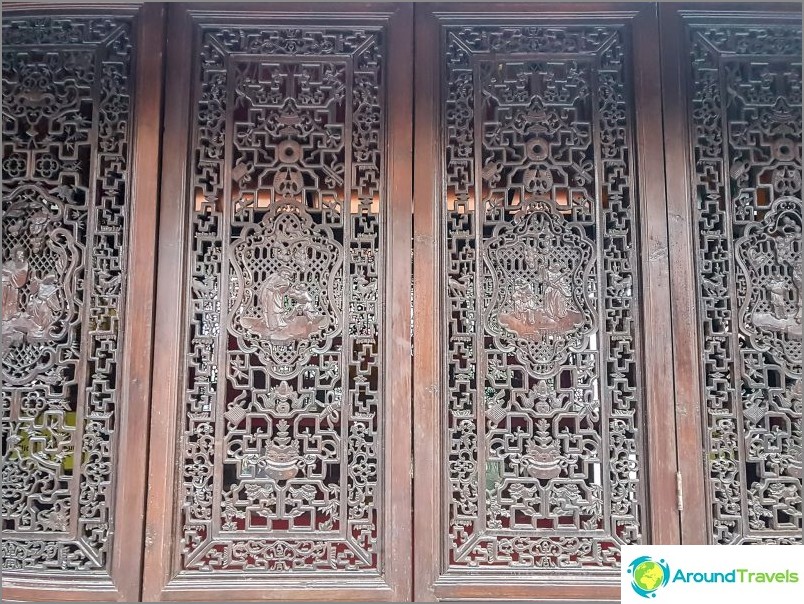 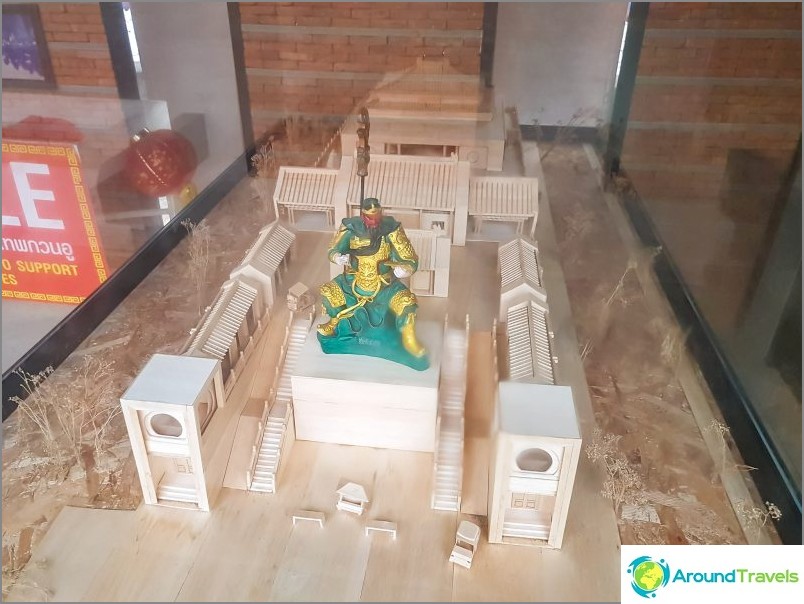 The layout of the entire sanctuary in miniature.

Entrance to the attraction is free, from 8 amuntil 6 in the evening, donations in the temple are voluntary. When entering the main buildings, you must take off your shoes, well, in general, to comply with the dress code for such places (closed shoulders and knees), although there are never any permanent clergy or supervisors. The entire territory of the courtyard along the edges of the parking lot is shops and cafes with Chinese and Thai food. I will not recommend any particular place for a snack, they prepare mediocrely, but the prices are quite tourist. Parking is very large, and at the time of my visit - free. The sanctuary is located in the large Muslim village of Hua Tanon, which is known for its food market and mosque. 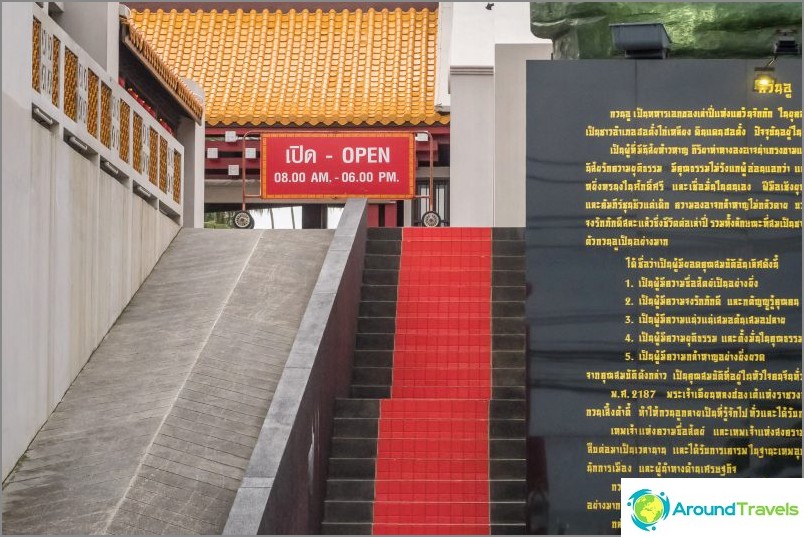 Shrine of Guan Yu (Guan Yui Shrine)
The sanctuary and cultural center of the Chinese communityKoh Samui, which is in a state of construction for several years. It is built on donations from the population, is clearly visible from the ring road - a huge statue of a man with a red face and green clothes will look at you from concrete.
Read more on sanctuary. 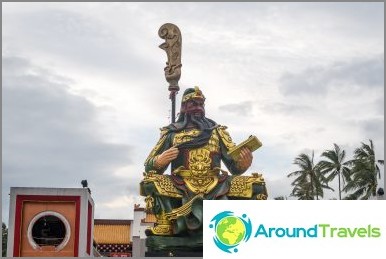 The sanctuary and cultural center of the Chinese communityKoh Samui, which is in a state of construction for several years. It is built on donations from the population, clearly visible from the ring road - a huge statue of a man with a red face and green clothes will look at you at concrete. In more detail about the sanctuary.

Flight Bangkok-Samui on a low-cost airport - is it worth ...