Khao Lak Beach is a good beach, but little infrastructure

Khao Lak Beach, the same name with the name of the entire resort, is only third in popularity after more visited and developed Bang Niang and Nang Tonga. In the north, Khao Lak Beach is separated from Nang Tonga.high cliff, so along the sea to go from the next more northern beach will not work. The main infrastructure of the beach and most of the hotels are located on its northern part.

I liked this area from all the beaches of Khao Lakaleast of all. Firstly, the roads are asphalt-gravel, which is inconvenient and looks so-so. Visually, everything around seemed less beautiful than on Bang Niang and Nang Tong. Secondly, the area is small, not particularly like, literally the road from the road to the beach and a couple of lanes.

The total length of the beach is about two kilometers. This area can be divided into two parts, the northern and southern. In the north there are all hotels and the entire beach infrastructure, in the southern part there is almost nothing, only palm trees and fields, and near the coast there is a Poseidon hotel and 3 cafes.

Further to the south there is a stone ridge, beyond which one can see an even wilder beach, where there are no people at all, and where, in principle, you can walk along the coast.

Usually they live in the northern part, and in the south they walk along the coast. Yes, you can get there by car or bike, but you need to go through the road and a pretty decent hook will come out.

Sunset in the water is quite sharp, the shore goes downat a noticeable angle, so that almost immediately the depth of the chest becomes an adult. In the low tide season, the sea leaves a little, but after passing 10-20 meters in shallow water you can already swim. Waves are, as elsewhere on the Andaman Sea coast, in summer.

Casuarin trees grow along the beach, in some placespalm trees or other types of vegetation come across. But this is not near the water itself, the sand strip is quite wide and often there is a strip of green vegetation between the sand and the trees - creeping vines and grass along the ground.

In the early morning, from dawn, the casuarinas cast offthe shadow is just towards the sea, so morning is the most comfortable time, with natural shadow. Towards noon, the shadows almost completely disappear, and then the sun shines directly into the face, and at sunset goes into the sea. But in the late afternoon and sunset, the sun is not burning, but even pleasant.

There is also a shadow from the umbrellas that exposebeach cafes, hotels and small businessmen, who earn their living by renting tourists sun beds with umbrellas. Hotels often place their deck chairs under casuarin trees, thus occupying the best seats in the shade. 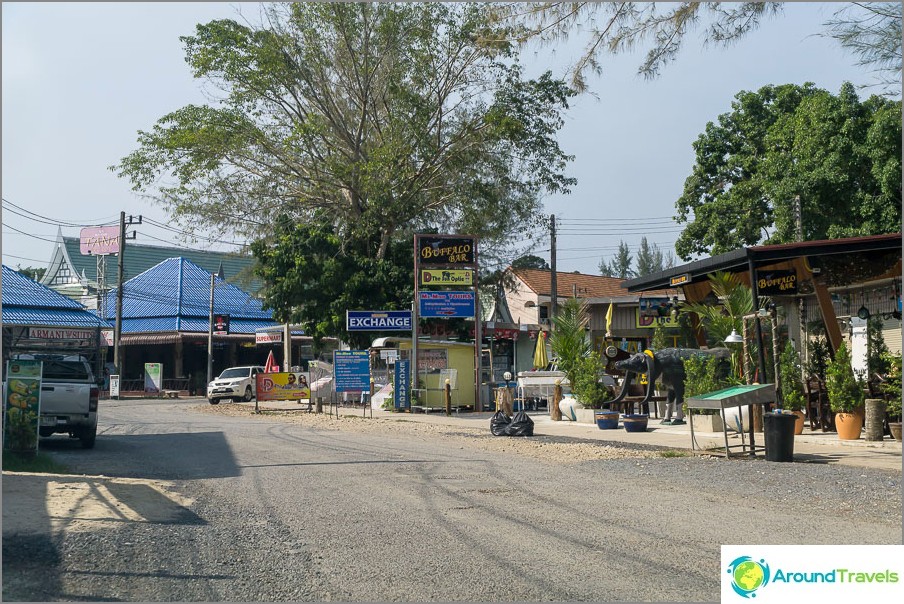 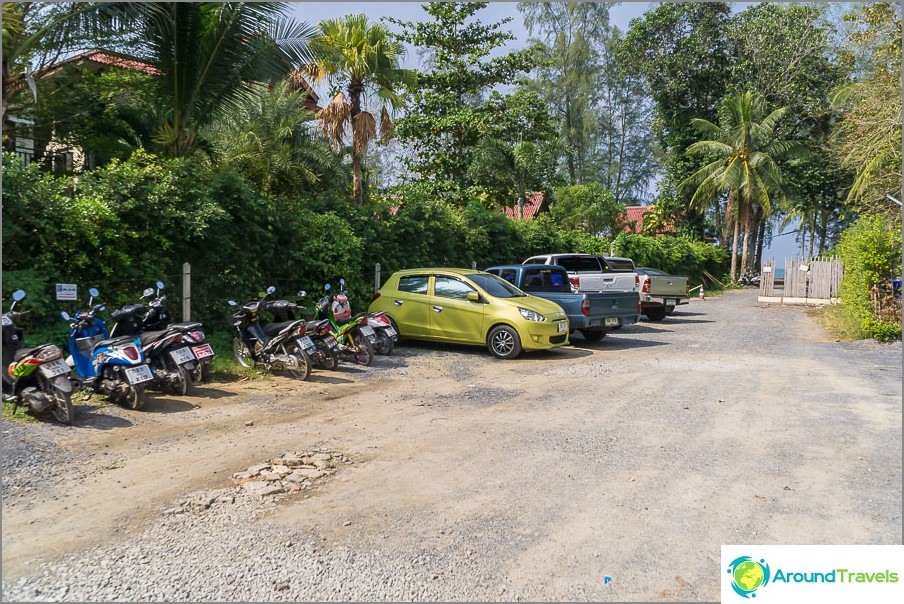 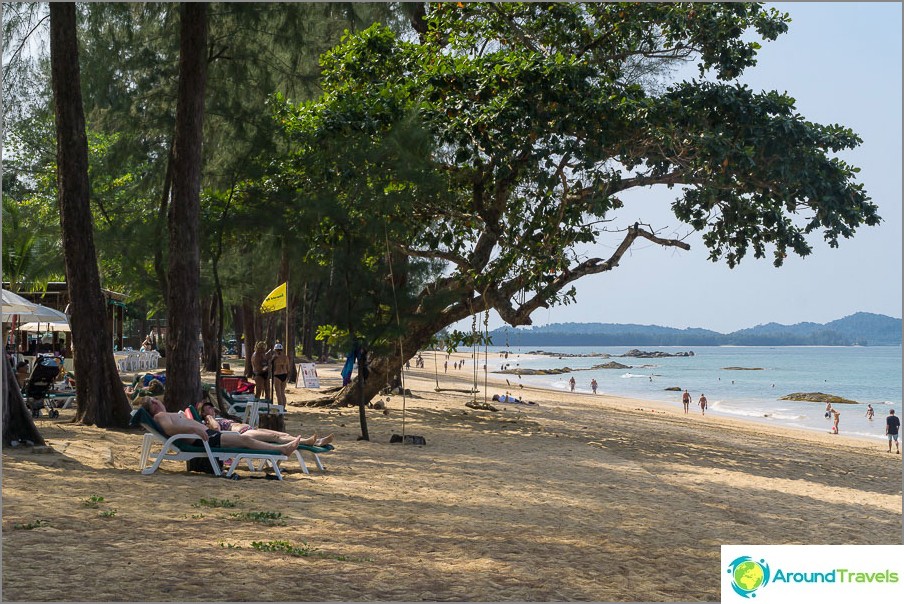 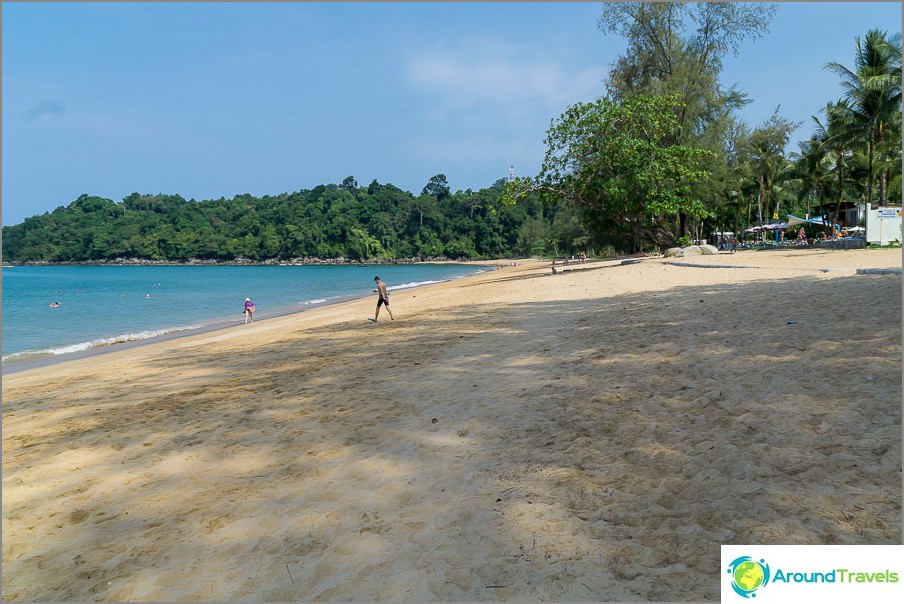 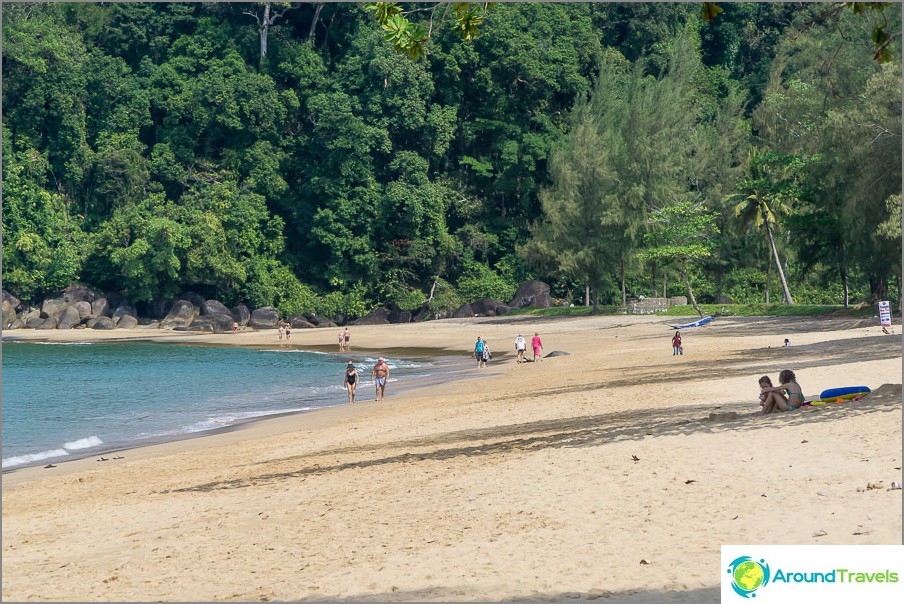 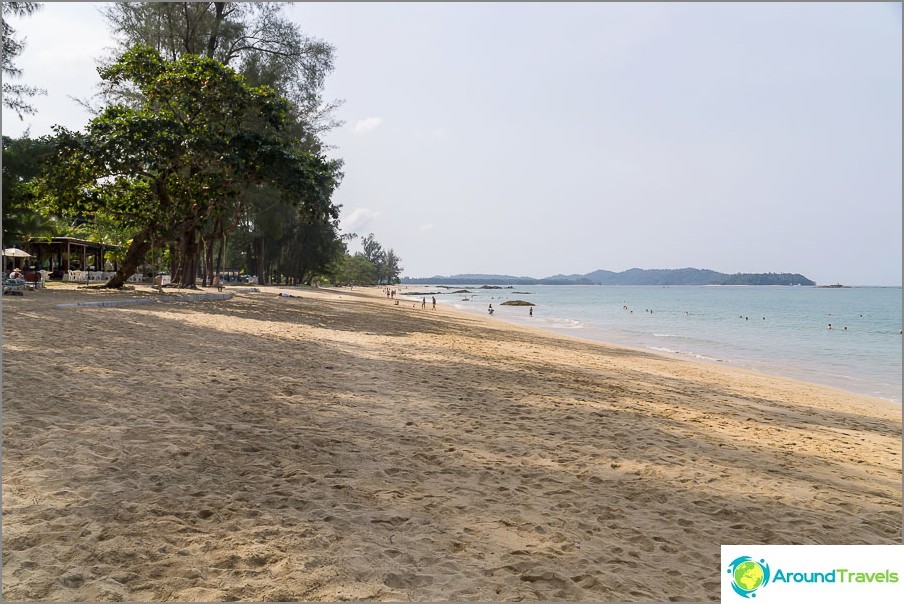 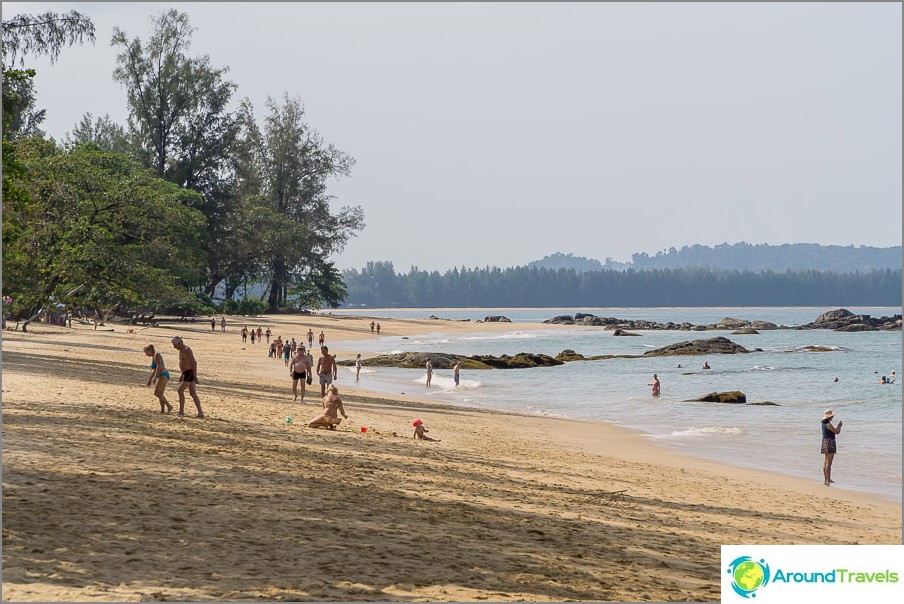 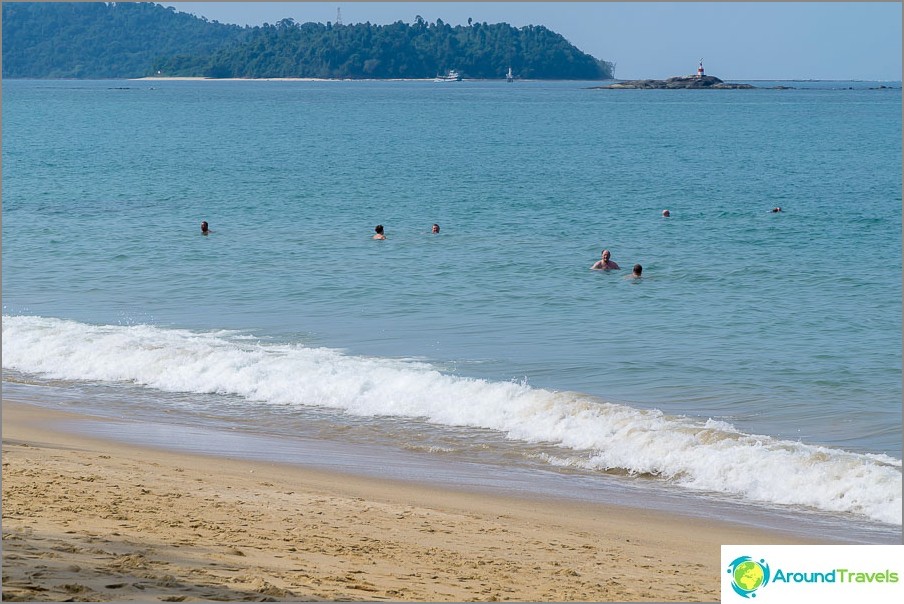 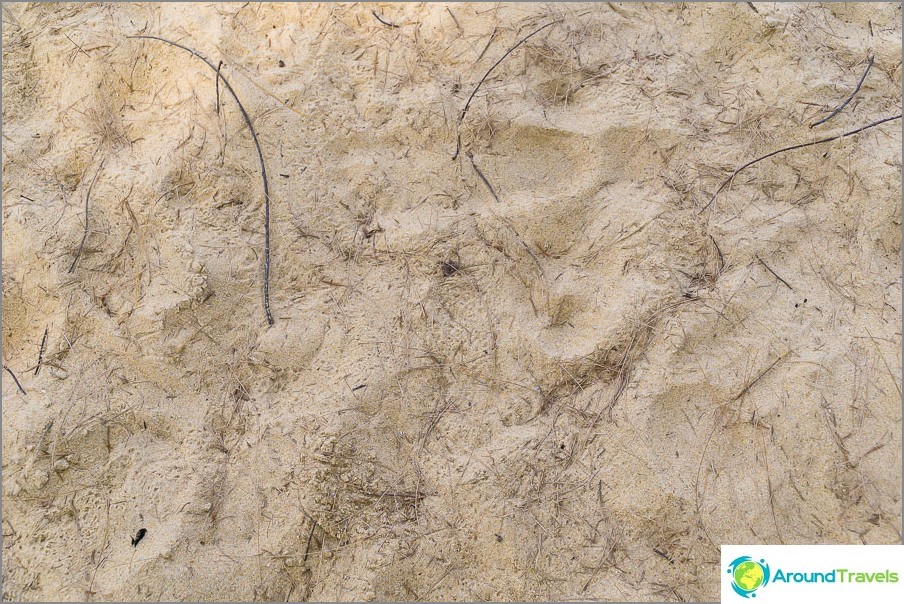 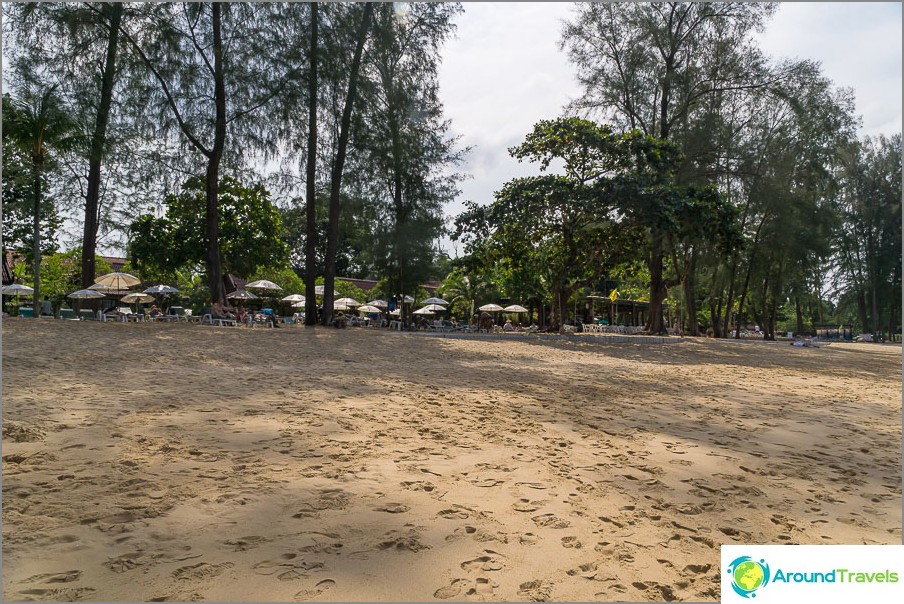 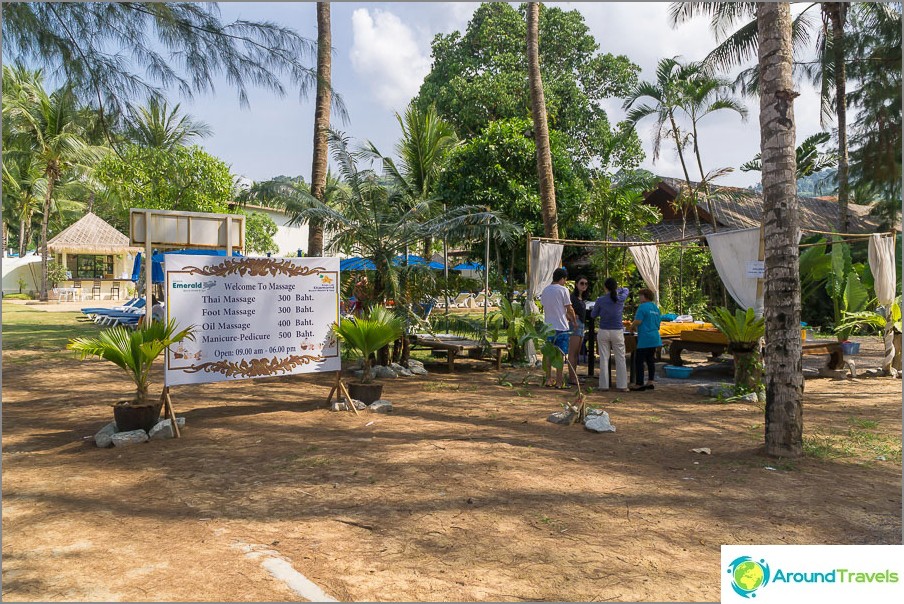 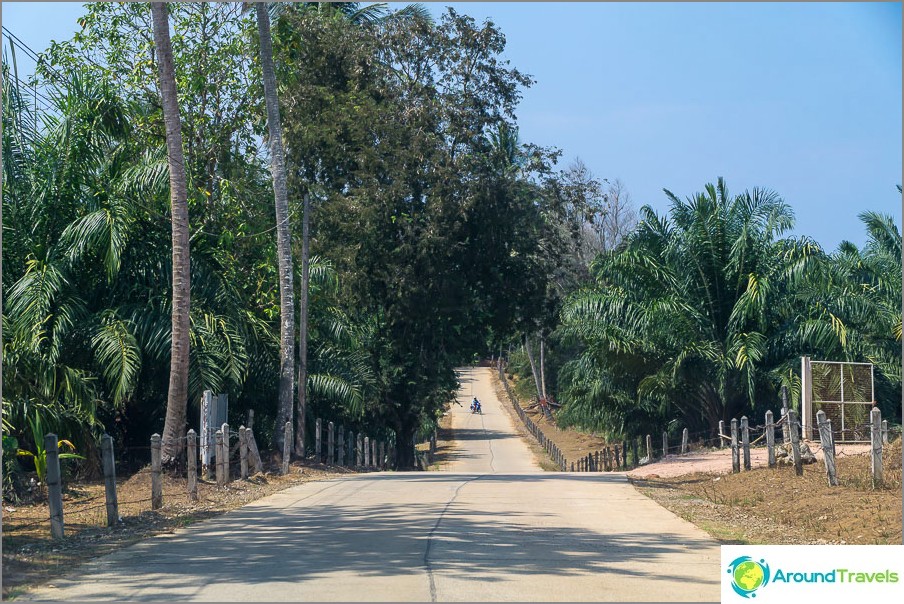 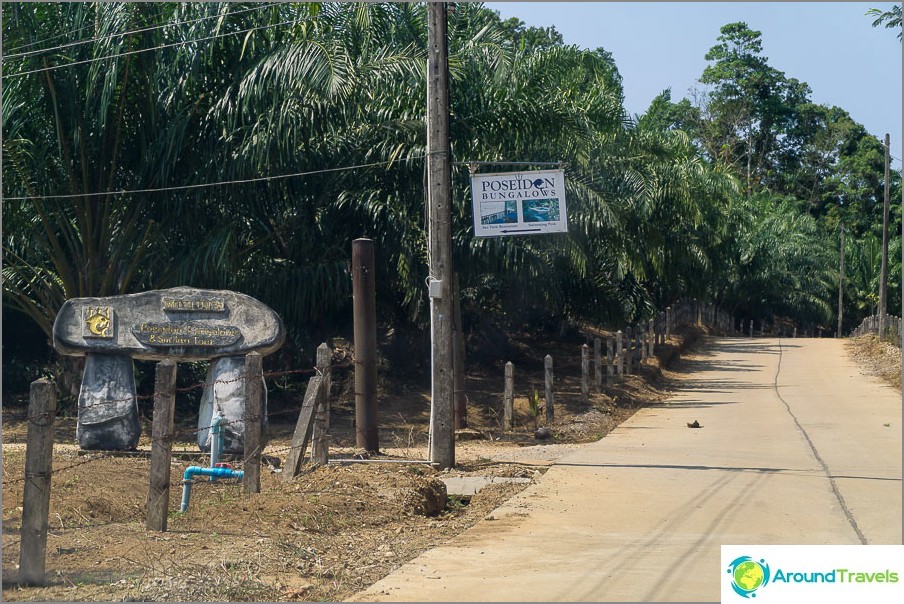 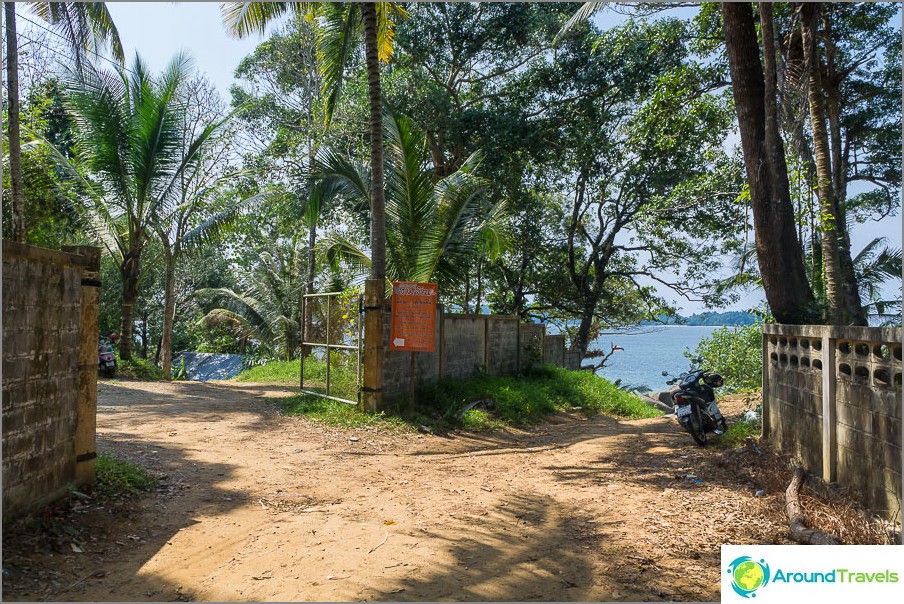 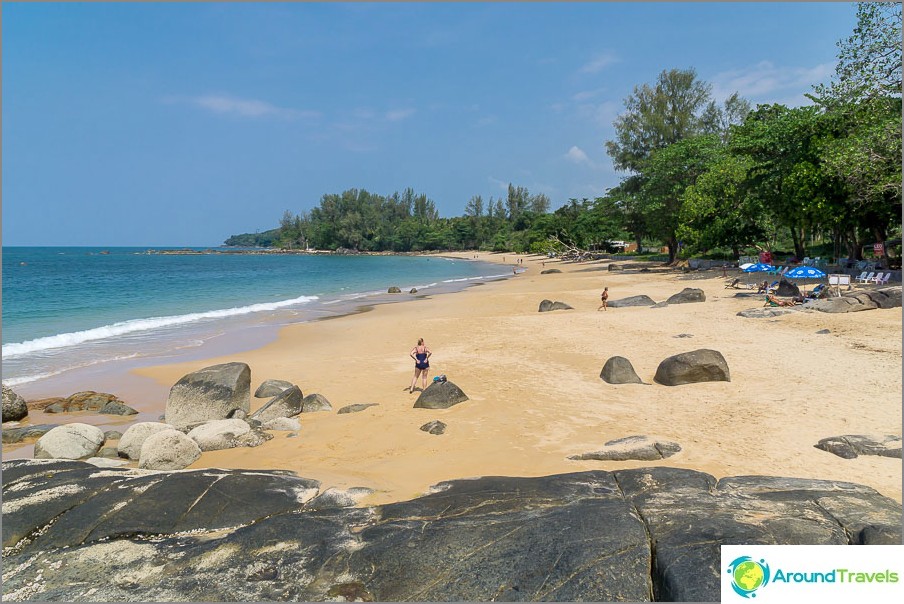 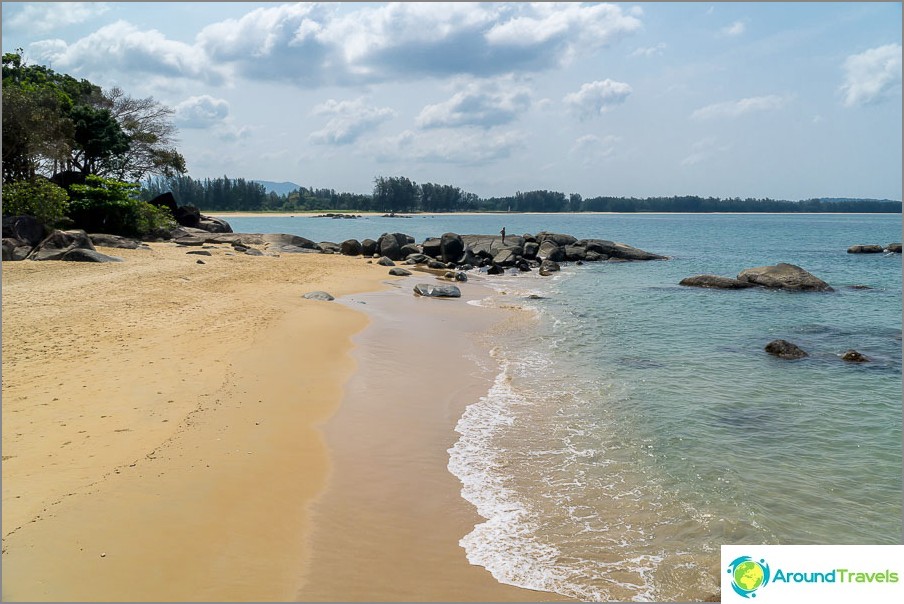 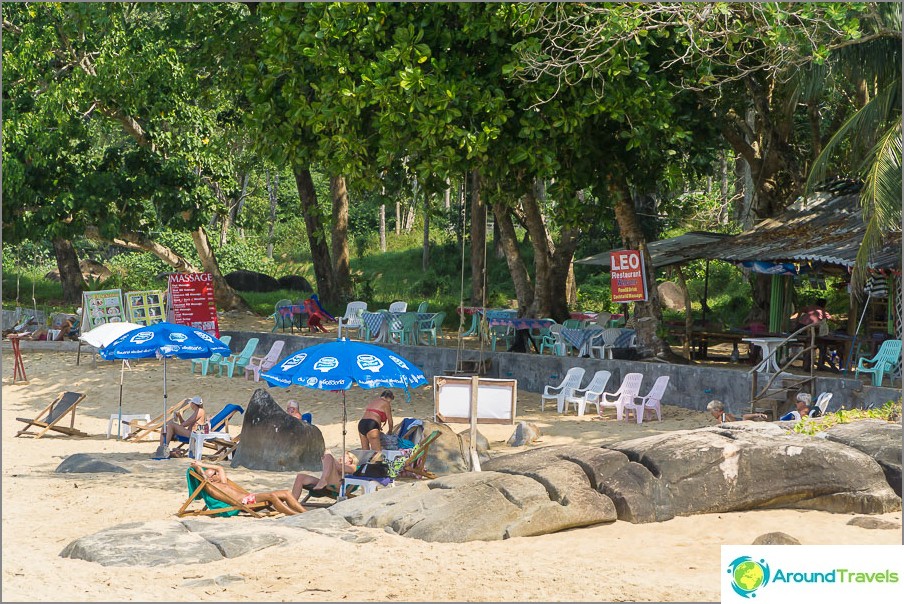 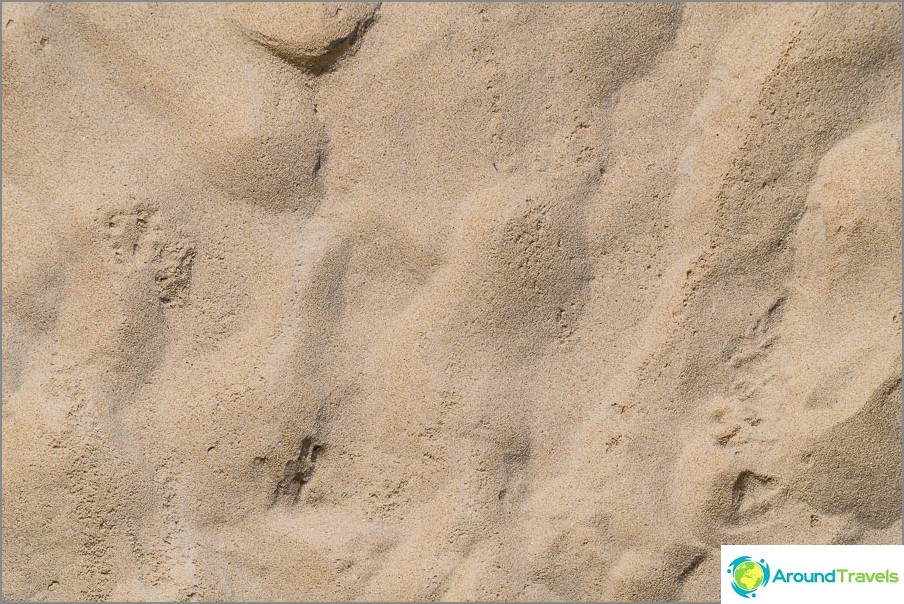 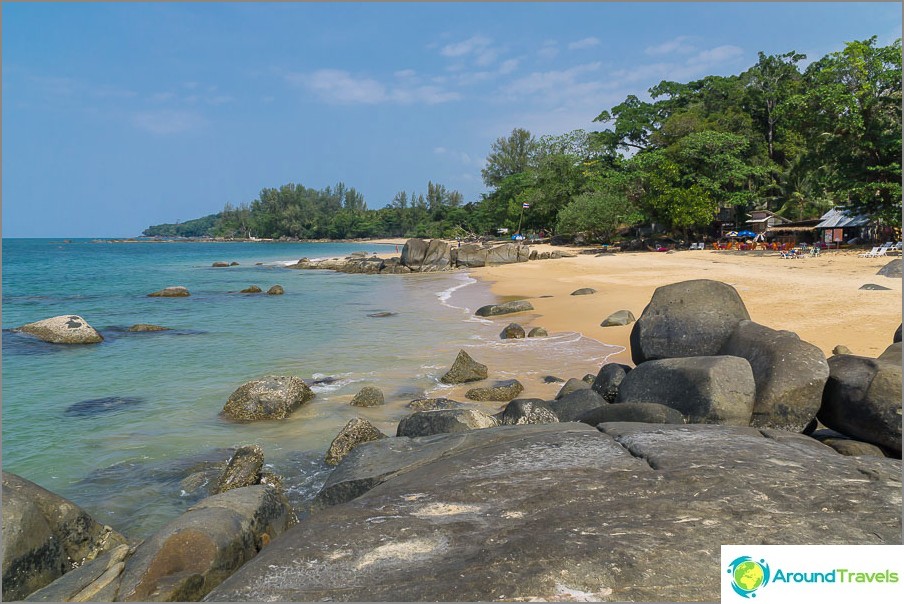 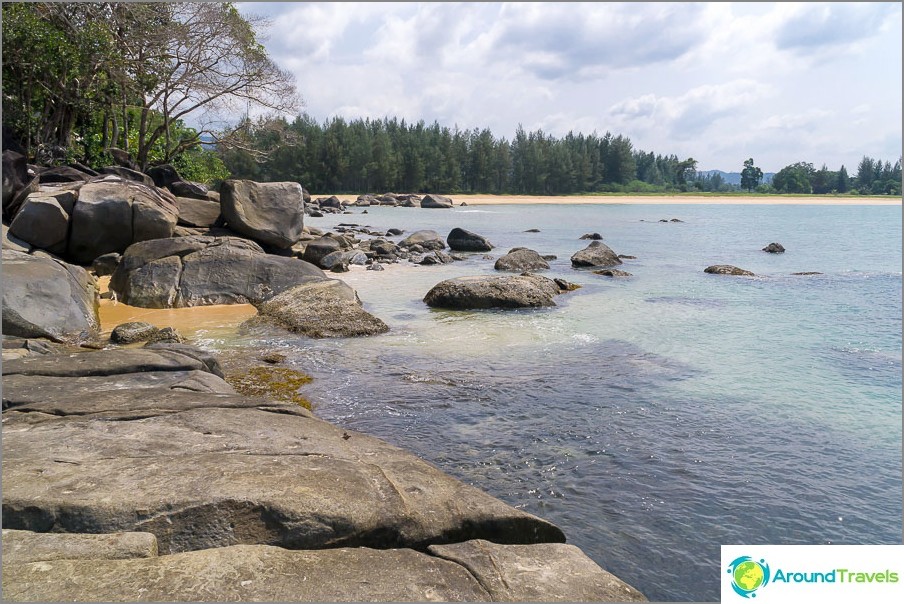 You can see a wild beach in the military base

There are small shops, cafes and the like.in the north of the beach, along the street leading to the sea. In the same area there is a village of elephants, where tourists can ride on one of these animal symbols of Thailand. The continuation of Khao Lak Beach to the south is a very pleasant place.

Especially in the area of ​​large stones. Not surprisingly, many go here on the beach from the north. Clear sea, stones, surely there is snorkeling, while there are few people. North of the stones and not reaching Poseidon Bungalos, there are three cafes on the beach and parking next to them. 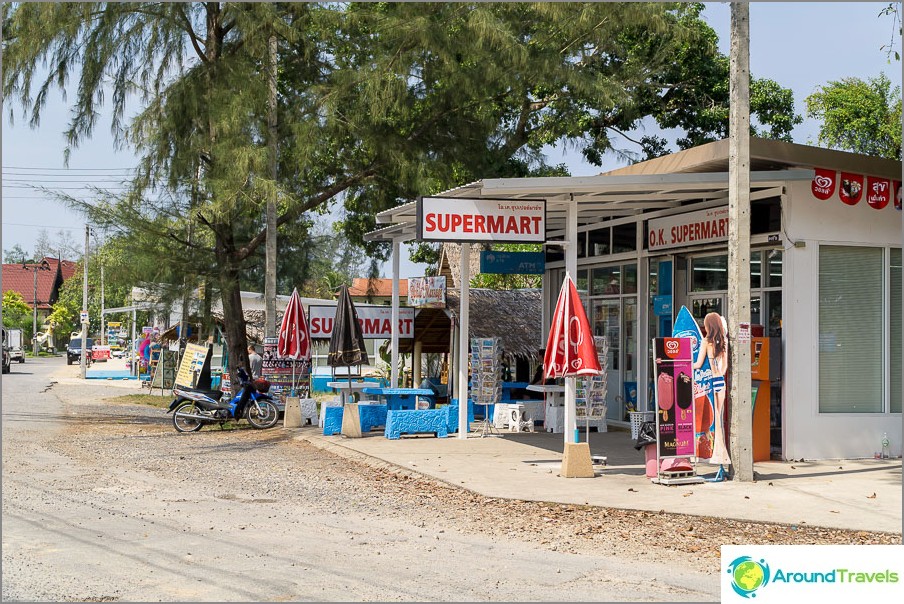 Khao Lak district is small, practically it is onestreet, she is the road to the beach. From it departs a couple of lanes and that's it. But on this small patch there are hotels, resorts, cafes, massages and other things that a tourist needs.

, easier and closer to the highway Pechkasem Road - Jo Guesthouse

Next, the beach stretch to the south, but there is practically no infrastructure, except for the secluded hotel Poseidon Bungalows

, almost without reaching which there are several beach cafes.

In the very north of the beach there is essentially one.street leading to the sea. If you go along the road from Phuket, then it is difficult not to notice, it will be right before the beginning of the ascent to the mountain, beyond which will be Nang Tong beach.

At the very south of the beach is the Poseidon Hotel.Bungalos, follow the signs to him, you can drive from the road by car to the parking lot at the cafes. There is one main road. The Poseidon hotel itself bungalos stands at some distance from the beach, but a path leads from it to the beach on top.

To get to the wild beach (it is further south), you needclimb a stone ridge, which is located right by the sea, on the beach. Wild beach is generally empty, not a soul. At the same time from the ridge of stones can be seen barbed wire and red buoys away on the shore. Judging by the map, there is a military base.

This means that the beach is either completely closed forvisits, or it is necessary to enter through a military base, if they allow it (this is in Hua Hin and Pattaya, for example). Plus, there also flows into the sea river. The wild beach to the south stretches for some kilometers to the cape, after which the city of Lam Kaen and Thap Lamu pier begin, from where they sail to Similans.

Khao Lak Beach
Although the beach is called Khao Lak, butthe infrastructure is not here, but in the villages of Bang Niang and Nang Tong. The beach itself is good, there are few people, but I didn’t like the area around the beach very much. Point is in the northern part of the beach (where the village). The southern part with only one hotel and a couple of cafes on the shore, there go on the beach on foot.
More about the beach. 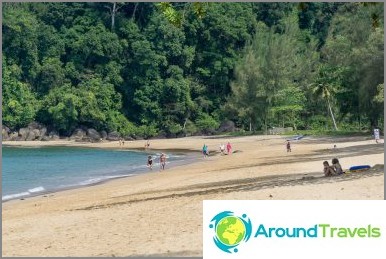 Although the beach is called Khao Lak, butthe infrastructure is not here, but in the villages of Bang Niang and Nang Tong. The beach itself is good, there are few people, but I didn’t like the area around the beach very much. Point is in the northern part of the beach (where the village). The southern part with only one hotel and a couple of cafes on the shore, there go on the beach on foot. More about the beach.