Space Museum in Kaluga and the planetarium - conflicting impressions

On the last day of our stay in Kaluga,yielding to the “persuasions” of the frost that began to spend more time indoors, we went to the space museum in order to personally see and feel the spirit of the cosmonautics cradle, as well as go to the planetarium, where we were advised to visit one of our readers. We did not go alone, but with locals Vova and Lyubawith whom we lived in Kaluga. And the impressions we all gained there were different and contradictory ...

Museum of cosmonautics in Kaluga 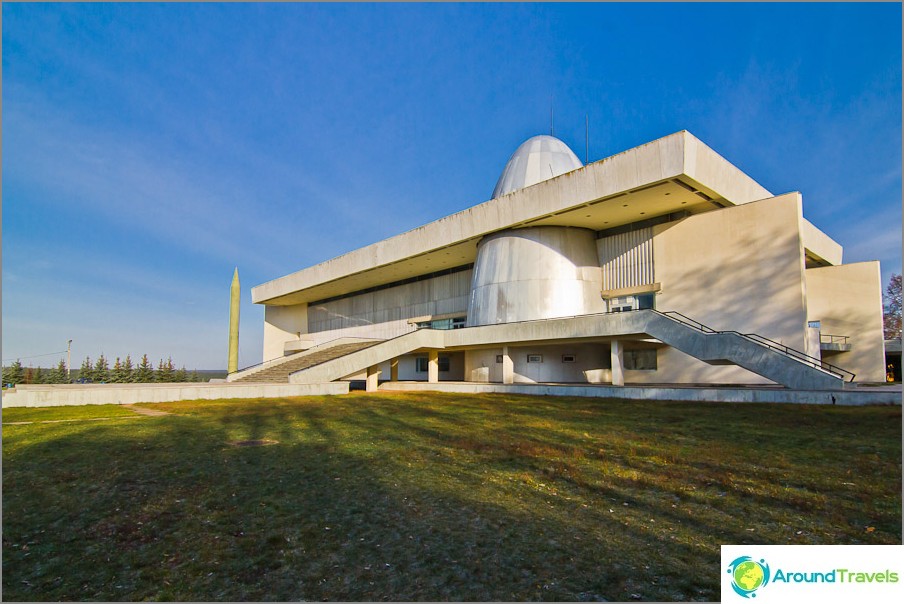 This campaign was informative, although I confessa little weird. Well, to begin with the fact that in all the halls, where the copies of various aircraft are presented in full size (why only copies?), Strange constructions made of polyurethane foam and other materials continually met with the form and color of the brain. Finally, we were confused by the exhibit called the Laika, the one that flew into space. But the author of the work saw her in some kind of light. Imagine a dissected stool, re-knit in a hurry, blindfolded - this is what this masterpiece looked like.

We thought for a long time, wondered what kind of strangethe installation and what the authors wanted to say by this, and why all this is exhibited in the space museum. It turned out that everything is very simple - these are the works of children of 7-12 years old, exhibited in the Museum with the assistance of the wife of the governor of the city, who is engaged in all sorts of social projects. And now we do not know whether to rejoice or be even more upset that these masterpieces were made by children, like this is our future after all. Is there really no normal materials and concepts? 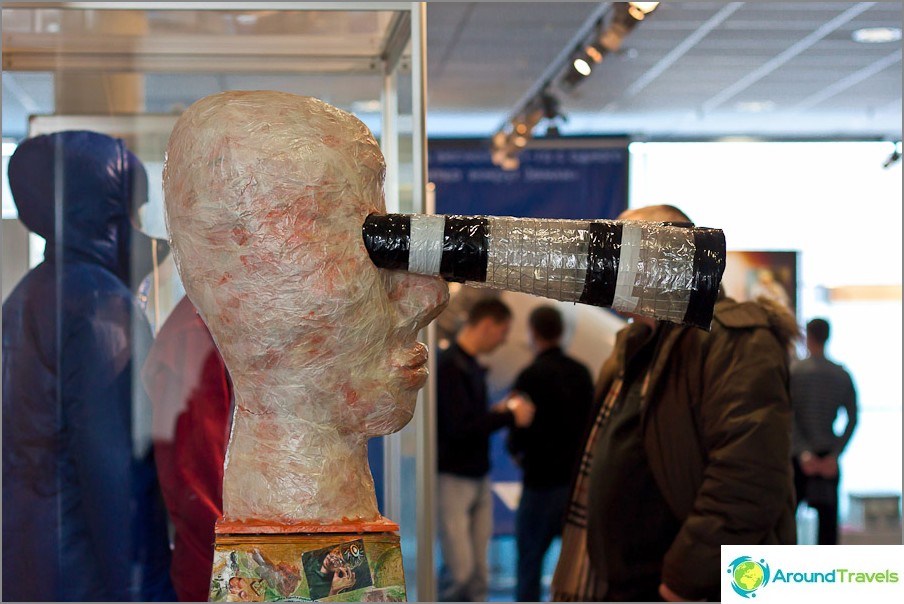 One of the masterpieces of the children's exhibition 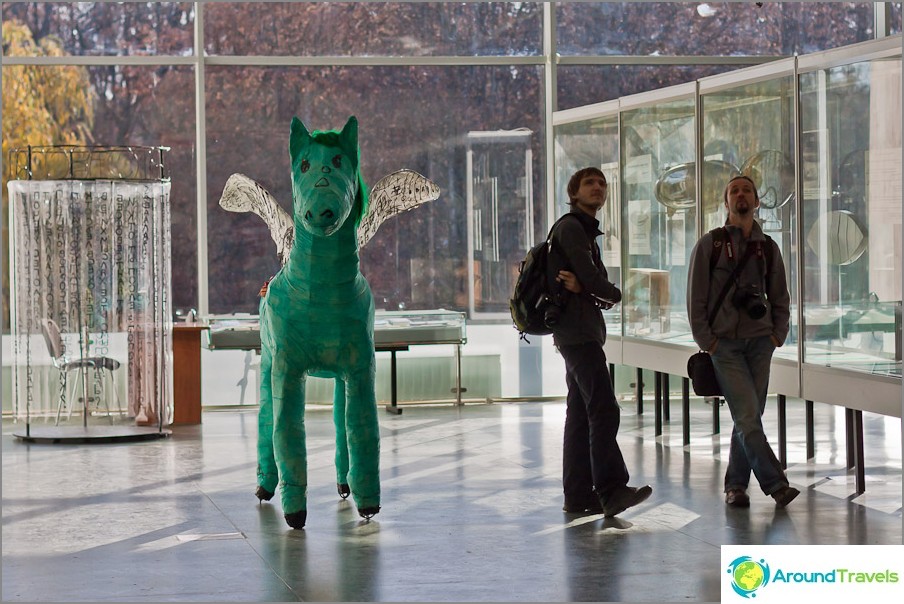 Green Pegasus is directly related to the space program. 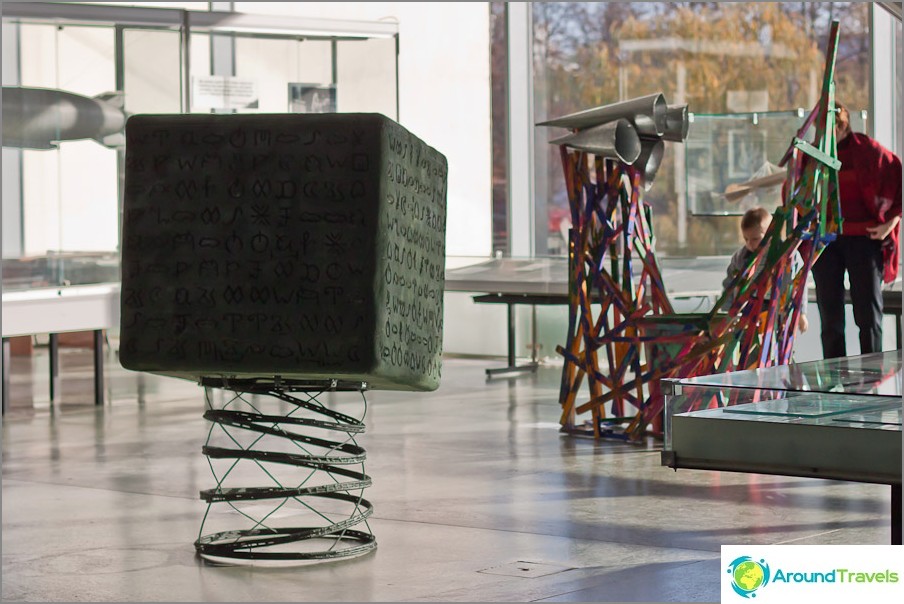 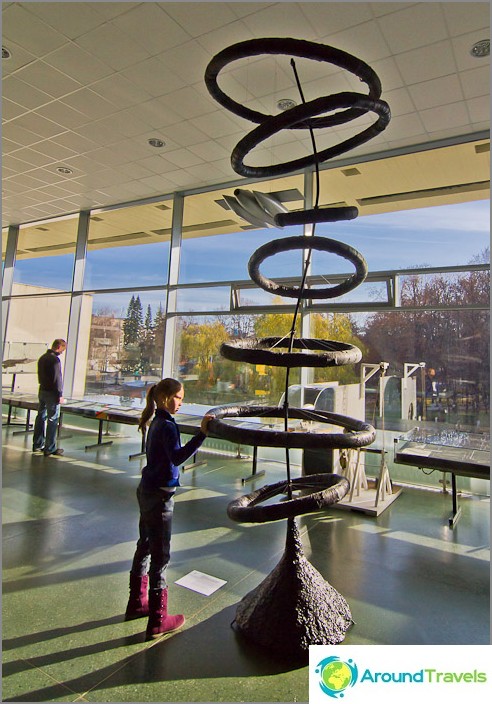 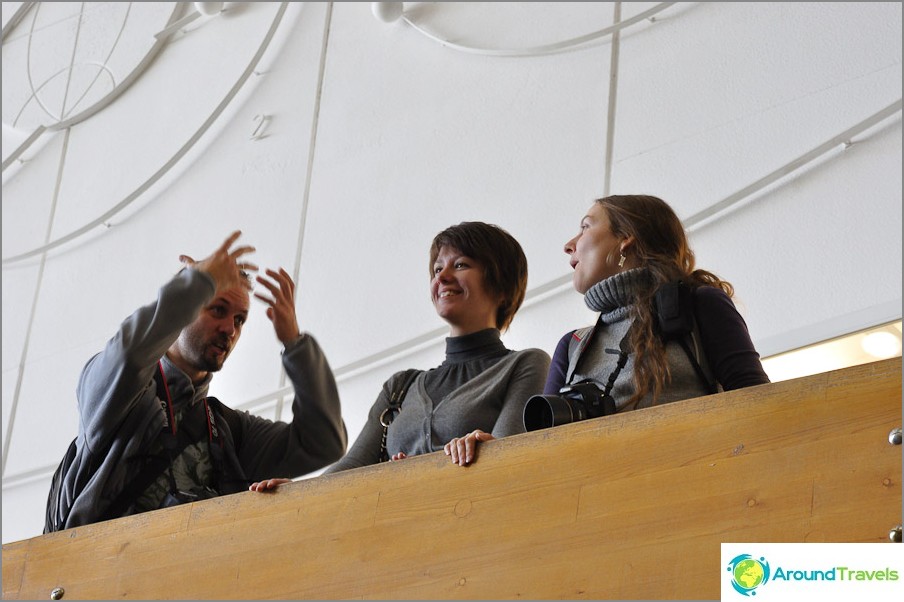 All this cosmic in the head does not fit! 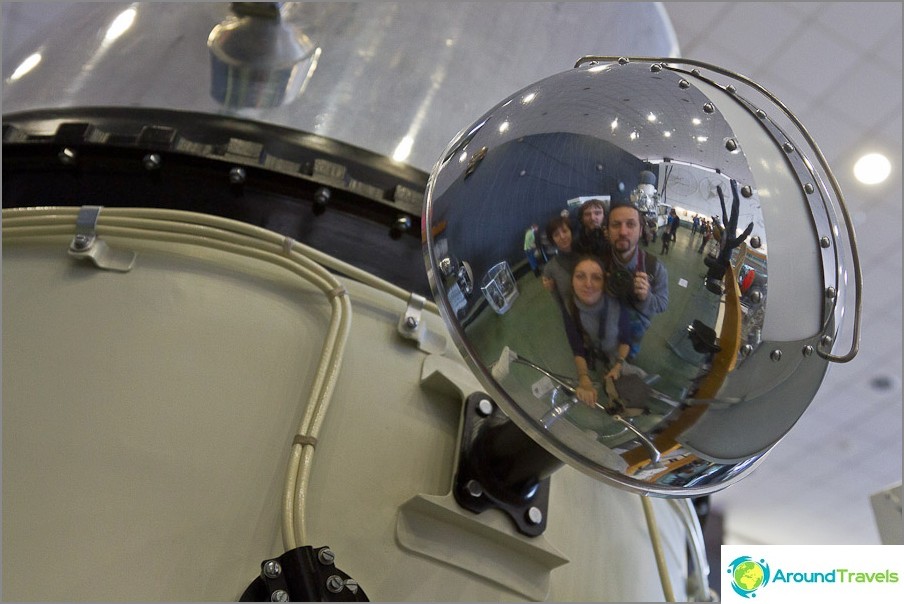 Our whole honest company in the Kaluga Space Museum

Another amazing point was the studydrawings and sketches of K.E. Tsiolkovsky, according to the official version of a self-taught scientist and cosmonautics pioneer, who invented a model of a rocket capable of flying into space. Honestly, I didn’t know that I knew about this man before visiting the museum, but after I saw the little men jumping on the springs he had drawn, I had doubts about his genius and significance. 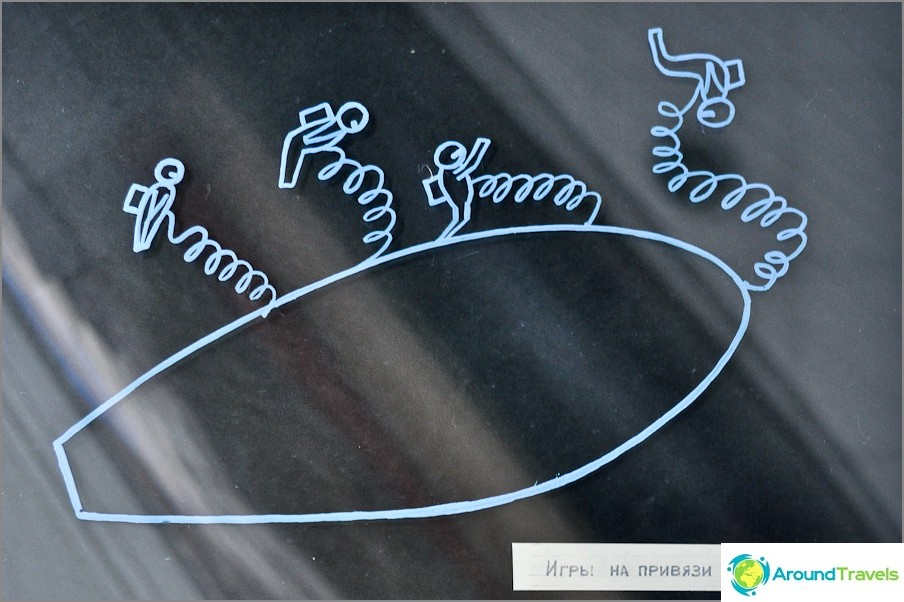 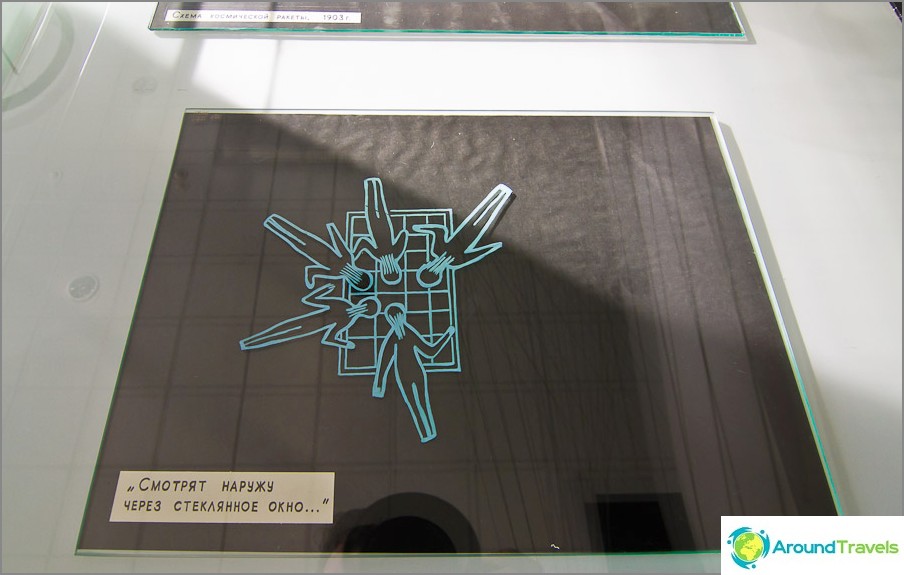 One of the original sketches, drawings Tsiolkovsky

Naturally on arrival home, I began to dig intoI haven’t found any clear answers to my questions. But I did meet interesting facts, I don’t know if this is true or not. For example, the fact that Tsiolkovsky began to be called “famous scientist” after our great leader sent him a telegram in 1935, where the phrase “To a Famous Scientist Tsiolkovsky” was flaunting. At the same time, the assignment of such a high-profile status entailed the imposition of censorship on most of his writings, many of which were not of a cosmic, but of a philosophical nature. And more than once there is a comparison between Tsiolkovsky and Jules Verne. Or the fact that Konstantin Eduardovich was a deeply religious man, and in order to calm down about the suicide of his two sons, he developed an independent theory about the reincarnation of souls. And the fact that the famous airspeed formula in airless space was originally invented not by him, but by some Meshchersky or even Ganswindt ...

Still, it is difficult to deny that Tsiolkovsky, being a simple rural physics teacher, was an outstanding person and most likely made a considerable contribution to the development of the science of his time. 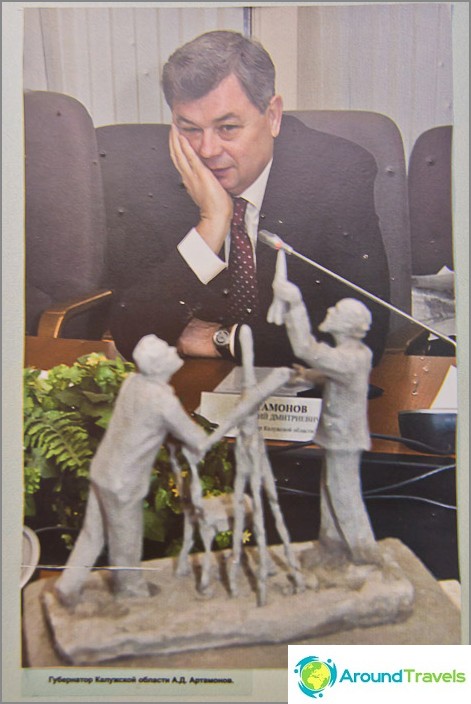 Sketch of the monument to the Queen and Tsiolkovsky 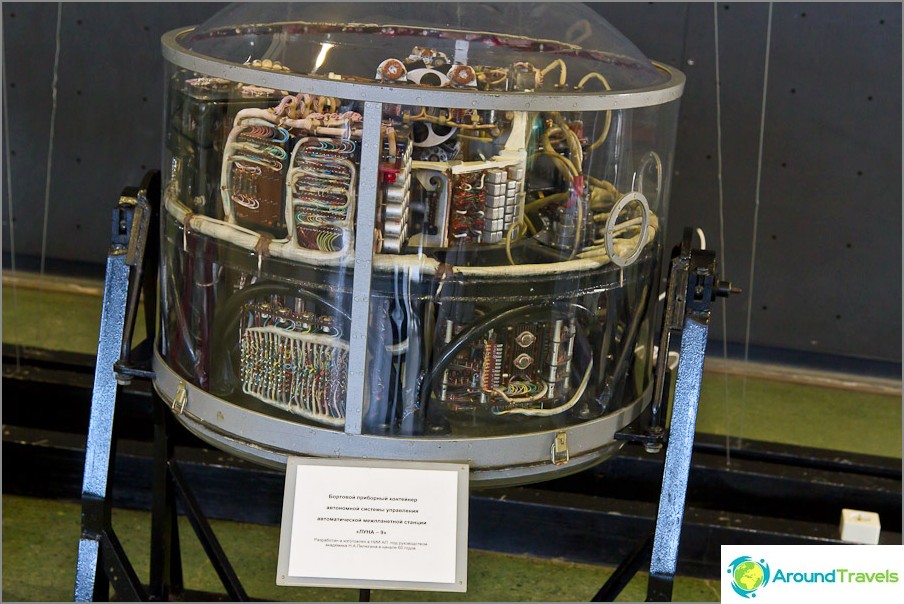 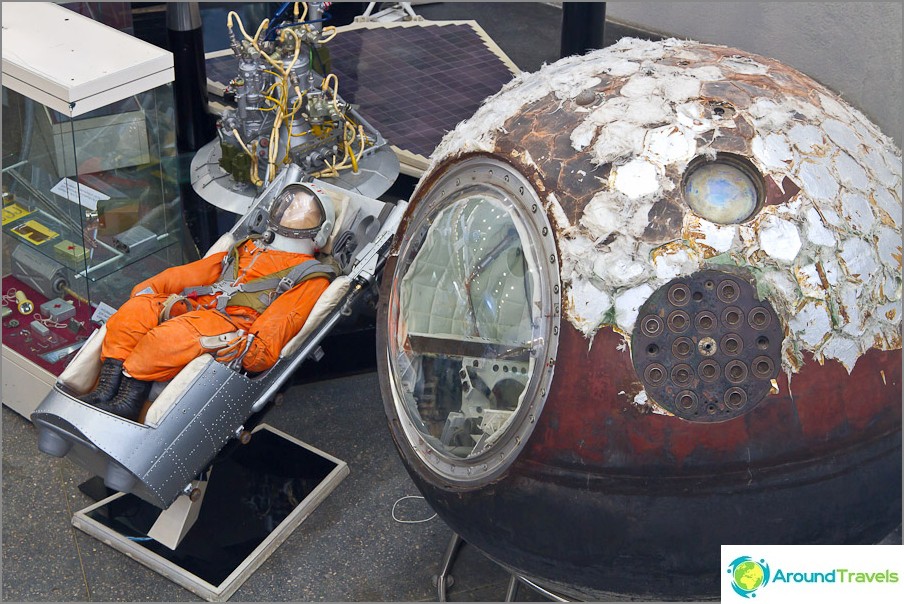 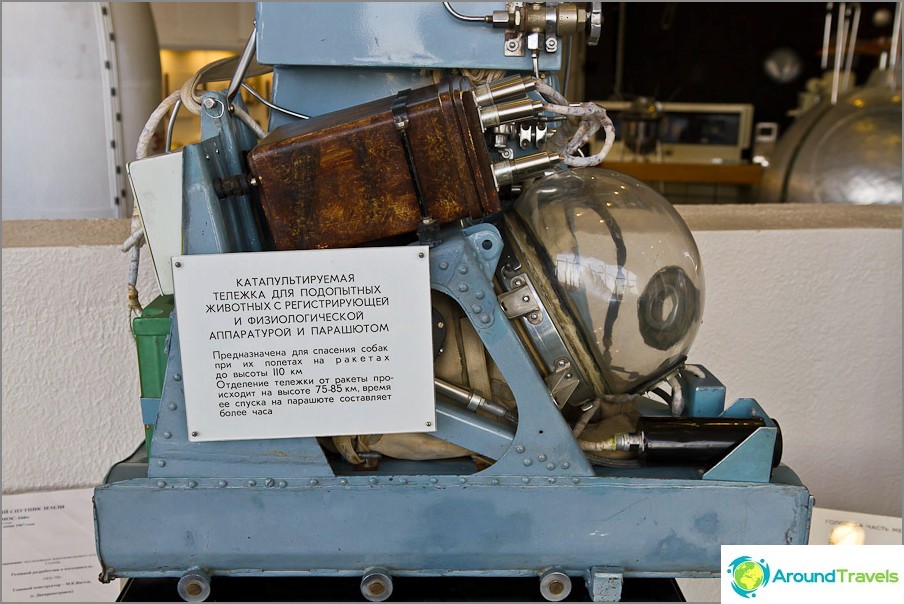 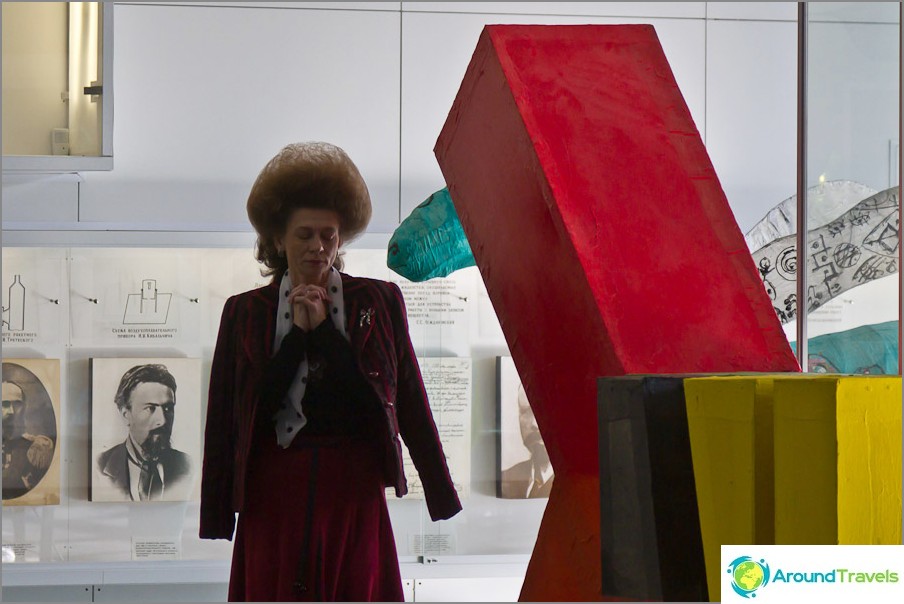 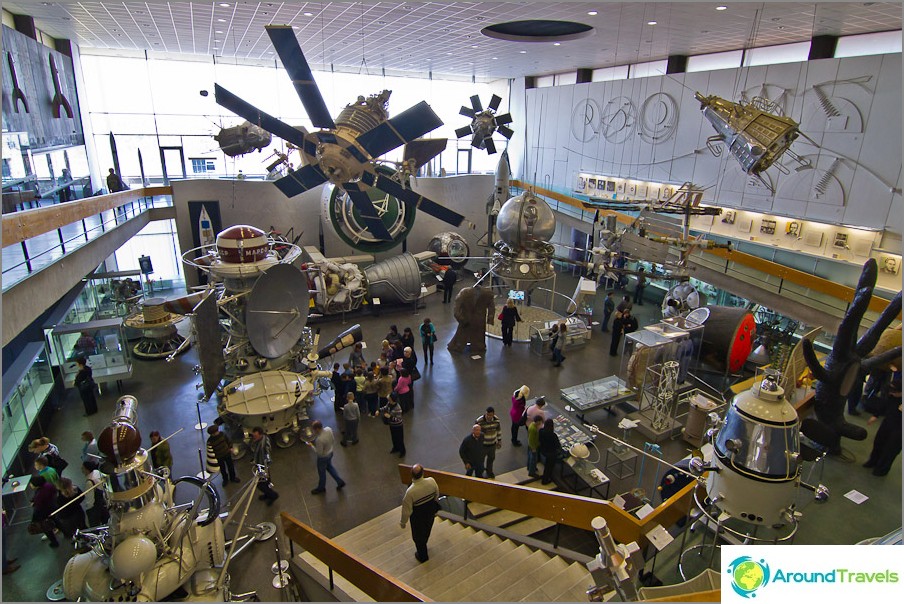 General Hall of the Museum of Cosmonautics 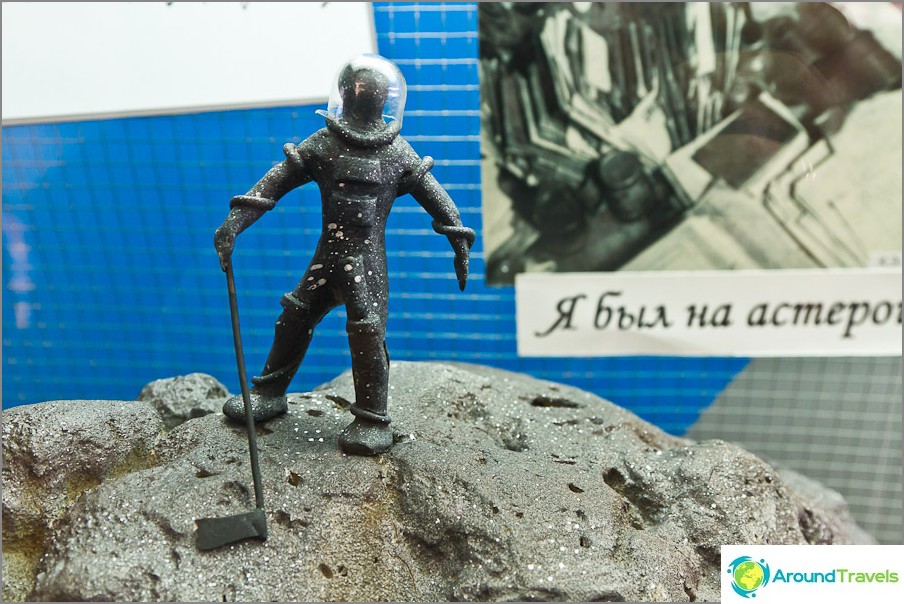 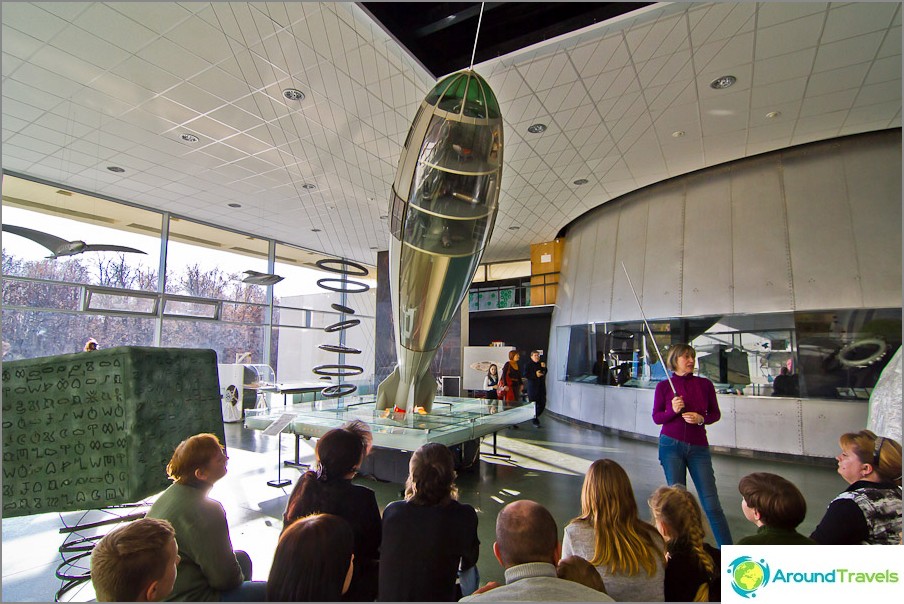 Excursion to the museum of cosmonautics 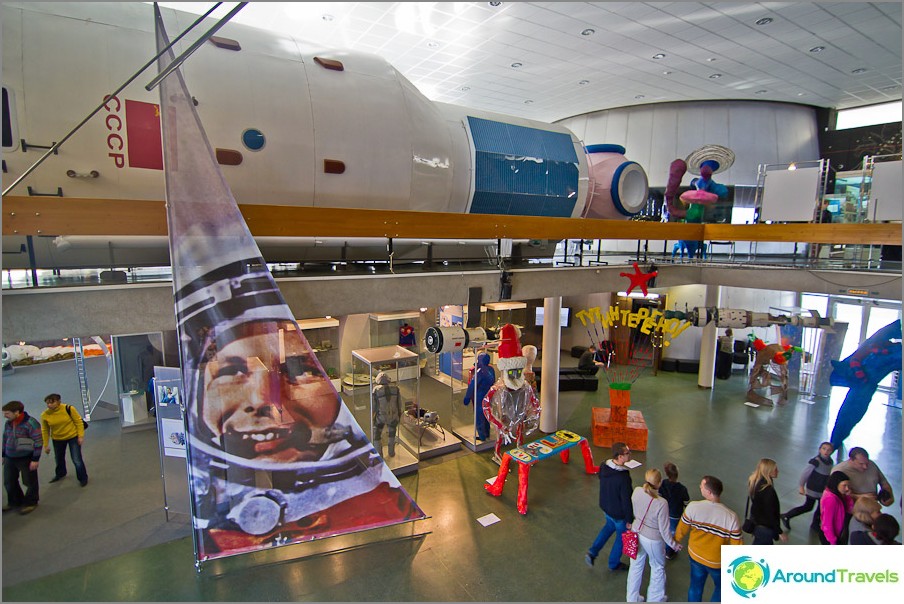 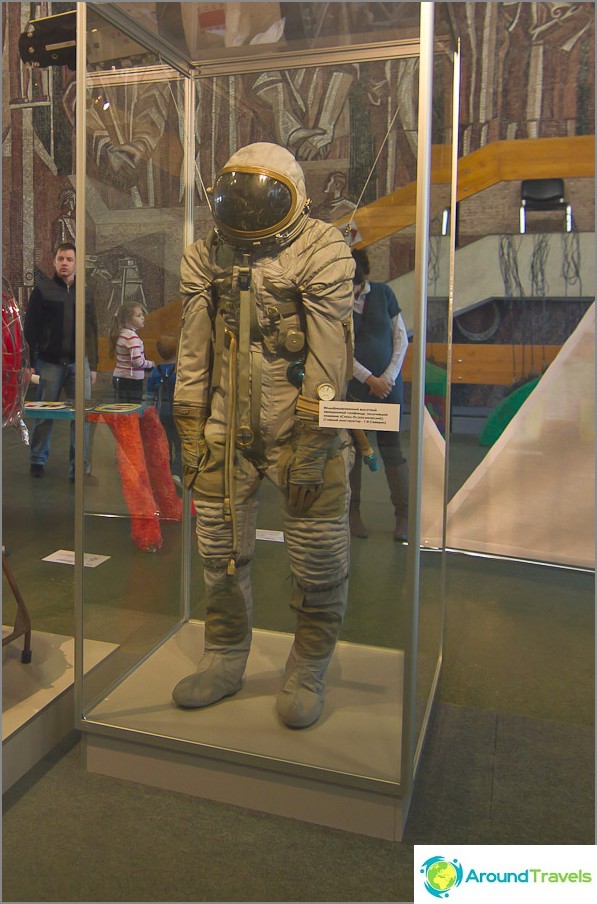 Fashionable suit with pockets in the Museum of Cosmonautics in Kaluga

And finally - Planetarium. A very “polite” ticket seller, “forgot” to warn us that we would get on the program for teenagers, so we had a culture shock in the hall. And not only because this program barely pulled onto the nursery, and not the teenage one (what is it then shown to children?), But also because of the 40 minute program the starry sky literally flashed a couple of times. The rest of the time we listened to the incoherent dialogues of poorly drawn computer characters, whose hands moved like claws, and managed to watch a couple of cartoons, one of which was Smeshariki! Honestly, since the night before I had not slept well, during the viewing I frankly fell asleep twice and did not regret it at all.

Well, this is no good! There are enough cartoons for children and at home ... I remember my delight at visiting the planetarium as a child, all these mysterious constellations. The feeling that in Kaluga the money allocated for the program for the planetarium, someone sawed, so riveted do not understand what. I understand that the old program was much better (according to reviews), and about the stars. 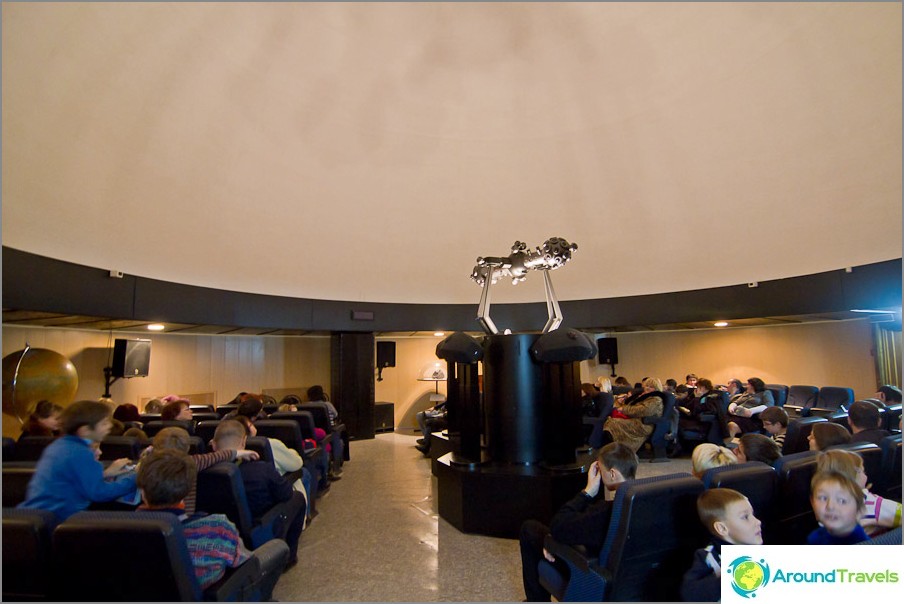 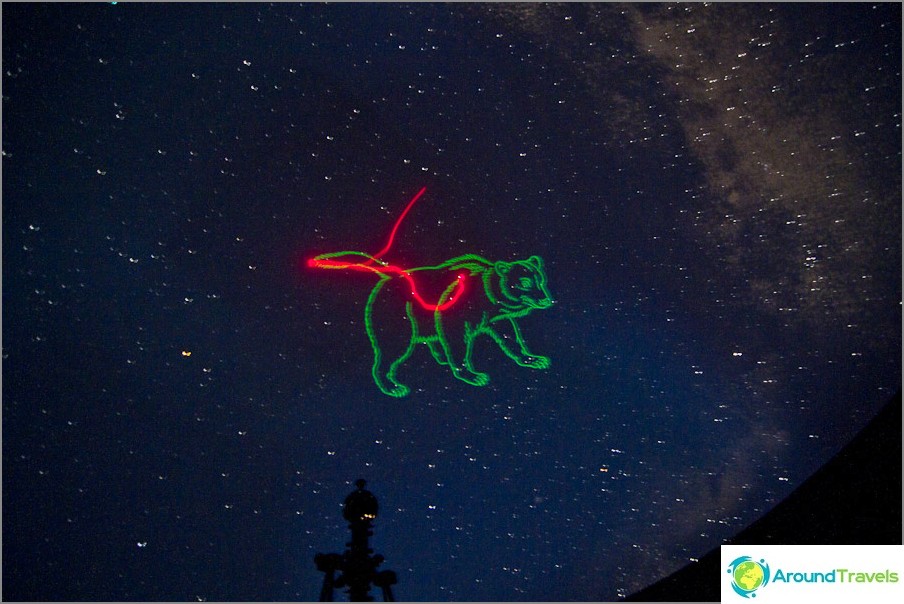 In the planetarium constellations we were shown a laser pointer 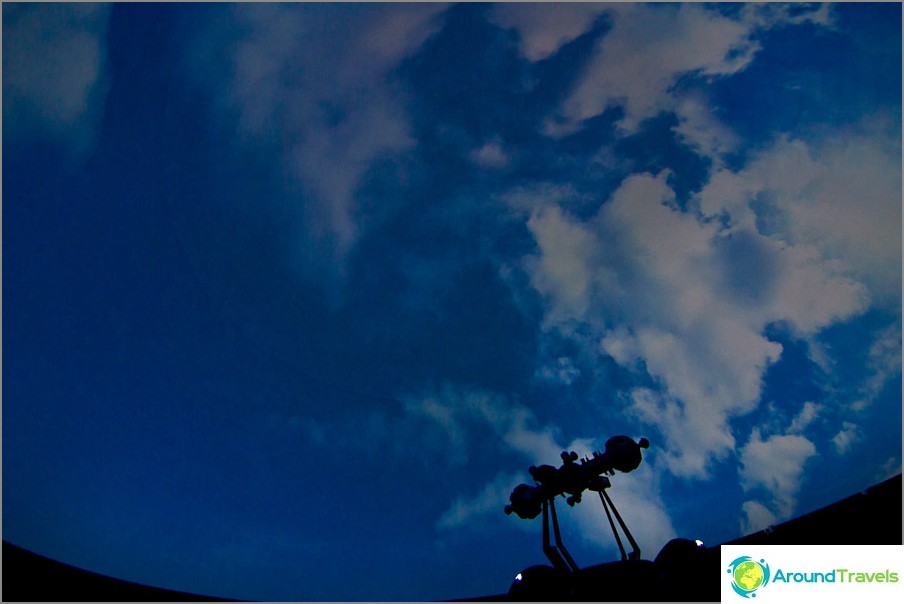 The 19th century residential house-museum and a pleasant charm ...