Everyone knows the phrase "Thai cuisine", buttry out and find out what they eat in Thailand happened only to those who have ever been in this country. And for those who live there or winters, luck even more - for them, this exotic food is becoming commonplace. I know that some Thai cuisine has enough time to get bored during the wintering, but for all these years I have not got tired of it, so I can only give a positive review. Now here in Moscow sometimes I try to cook something Thai or just go to a Thai cafe.

But I have never eaten in Russia,indeed, the normal Thai food that Tom Yam and Pad Thai are very different from what I was used to in Thailand. But it may well be that you will like Russian Thai food more, as more adapted, after all, any Asian food is specific.

We can safely say that in Thailand the cult of food. Not only do the Thais themselves feel absolutely free to eat absolutely everywhere (soup or roast is often eaten directly from a plastic bag, sitting at a bus stop or just on the sidewalk), so it is also impossible to take a step so as not to stumble upon the food being sold - it is everywhere. First of all, it is possible to thank for this the so-called makashnits (any kind of seller who carries his “kitchen” with him on wheels, be it a bike or just a bicycle). I will tell about them separately below. 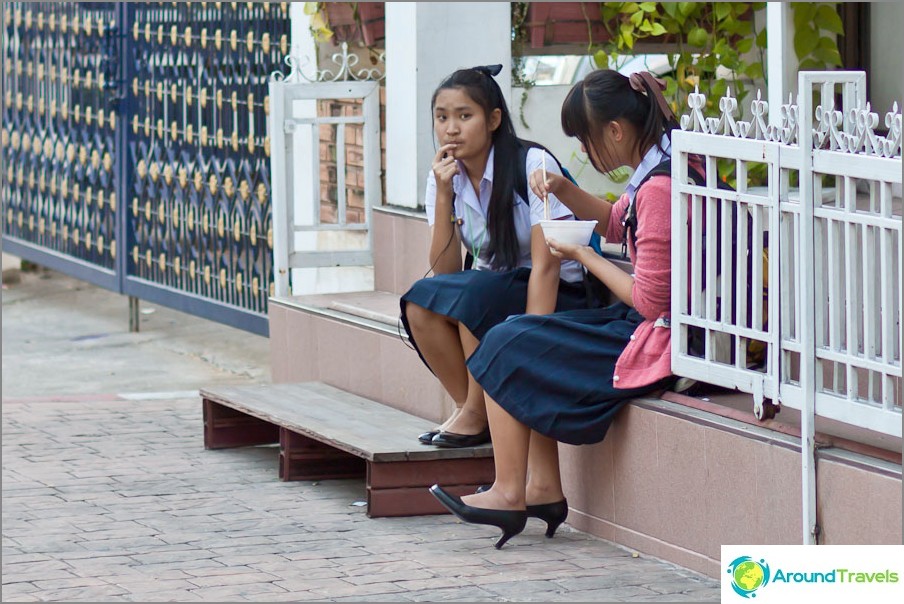 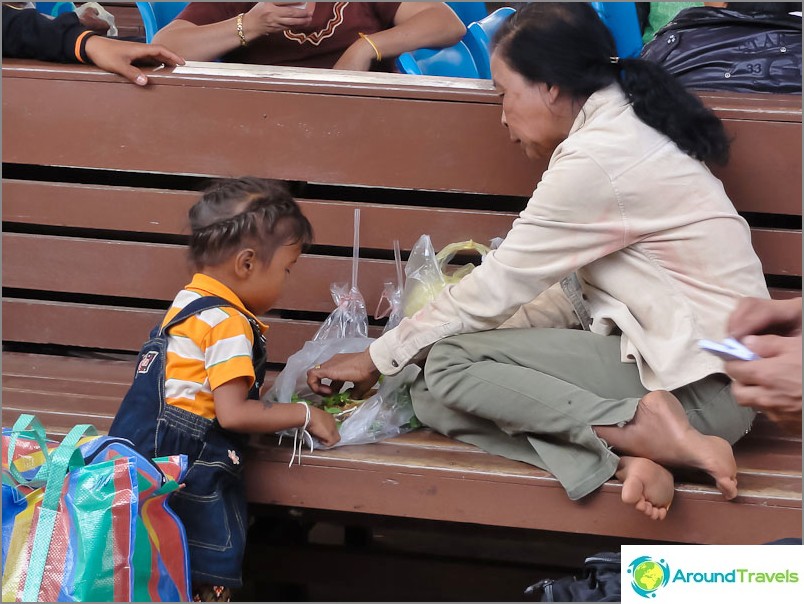 Eat from the bags at the station 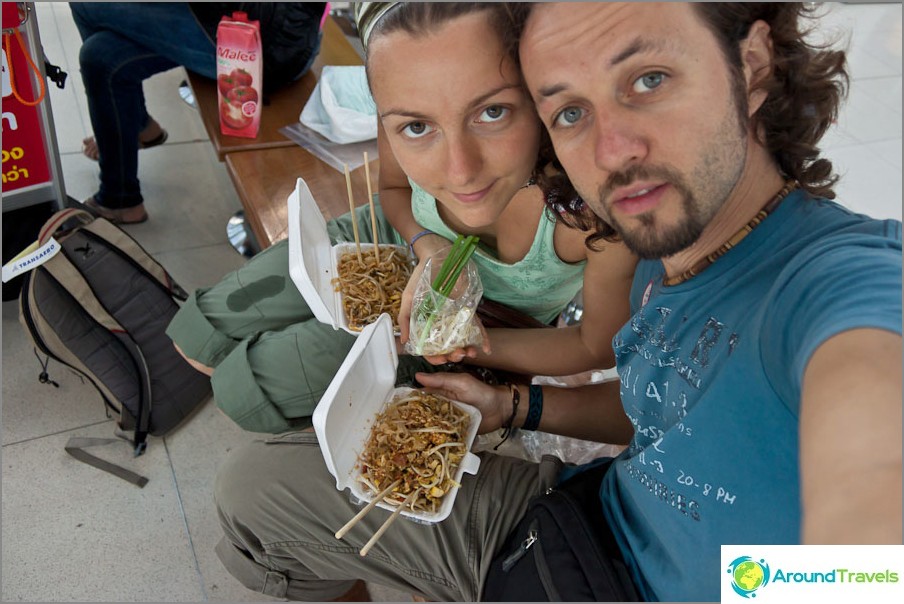 Eat Phad Thai at Bangkok Airport from the lotus

Is it dangerous to eat in Thai cafes?

In Thais, it is customary to use onlyfreshly prepared meals and do not leave cooked food the next day. So even in the kind of street cafes that look scary at first glance, the food will be fresh and tasty. In general, food is often cooked right in front of you - be it fried pancakes, pad thai or even soups. This can be especially clearly seen in food supermarkets in hypermarkets, where right in front of you, noodles are fried in sauce, thrown into the broth ingredients of the pit and puddled with som-salad dressing in a mortar. In addition, the Thais put in food a lot of hot peppers, curries and other spices that kill extra germs.

Initially buy food from these dubiousthe cooks were scary, but, having tried it once, they realized that often the food in macaroni or simple cafes (including fukdortah) is even tastier than in a licked European cafe. And never for all the time spent in Tae, we personally didn’t get into anything and didn’t have any problems with digestion, although we boldly tried to eat in different places that were not presentable.

So the safety of food in Thailand is not worth worrying about. Do not rush immediately to try everything, but you should not be afraid of Thai food, bypassing it. On insanitary conditions you just need to score. 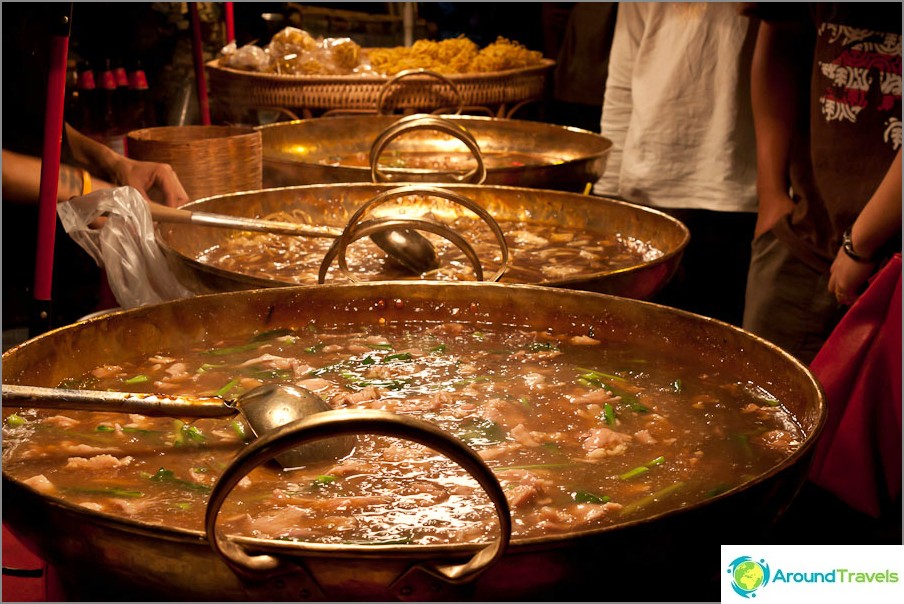 What to taste from food, main dishes

It may seem that Thai foodslightly diverse, but far from it. Sometimes you even marvel at the courage of their culinary art in mixing, at first glance, incompatible products and tastes. The basis of all dishes is rice and its derivatives. Moreover, rice itself is of several types (brown, crumbly white and sticky), and rice pasta amazes with the diversity of its forms. For Thais, rice is like bread for us, it can be served with anything. And this great many things! Not to say that I tried the whole Thai cuisine, but a couple of dozen dishes for sure. The most favorite still remain Pad Tai and Khao Pad.

Consider, if at the time of ordering the dish not to warnthat you need not spicy (no spicy - “know spicy”), then get ready to be a fire-breathing dragon. But do not worry, if you live in Thailand long enough, then you gradually begin to get used to the sharpness of dishes, and then this is not even enough. By the way, sometimes passing by the cooking food in the eyes, it already begins to water from the pepper, and you only wonder how they stand there quietly above the stove. 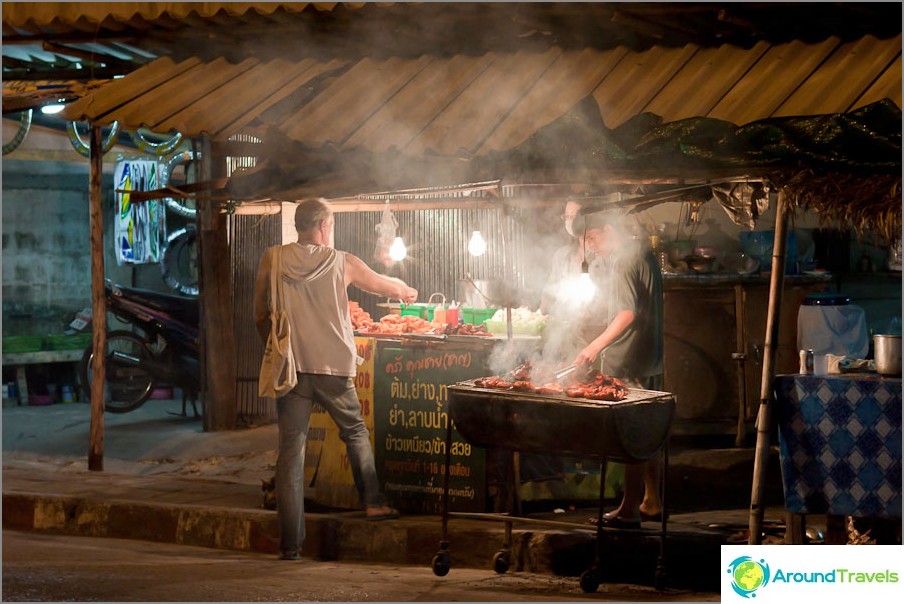 Pile of smoke on the streets

The price of food in Thailand in a cafe

Let's talk about how much food in Thailand. Prices for food in cafes are generally low. Even in the capital, you can eat cheaply almost everywhere, a choice of numerous food courts in shopping centers, and even inexpensive restaurants at hotels in Bangkok.

Food prices in Thailand in cheap cafes startfrom 30-60 baht for a simple dish such as fried rice with shrimps, and increase depending on the civility of the cafe and its proximity to the sea. Exactly the same rice with shrimp in a cafe on the beach or in a cafe with an interior will cost about 120-200 baht. Civilian and inexpensive you can eat in food courts in supermarkets, prices are 50-100 baht per dish. As you can see, the prices are small, and everyone can choose what amount to fit. That is why the Thais themselves and the foreigners living in Tae do not cook so often at home, there’s simply no sense in it.

Here are more examples of prices for food in food courts: som-tam - from 35 baht, pad thai and fried rice - from 40 baht, a large plate of noodles with various fillings - from 60 baht, tom pits - from 60 baht.

Approximately the same prices in simple ThaiCafes not by the sea. European dishes are, by definition, more expensive, from 150-200 baht. For example, spaghetti bolognese or cream soup, depending on the location, will cost 200-250 baht or more. Cocktails - from 40 baht and up to 180 in bars for tourists by the sea. The same tom-pit in a tourist place will cost in a cafe for tourists and 80 and 120 and 200 baht, depending on the interiors and the promotion of the place. Russian cuisine in the cafes in the resorts are usually between 100 and 200 baht. Coffee costs from 40 to 120 baht per cup (if natural), cocktails - from 20 baht and up. 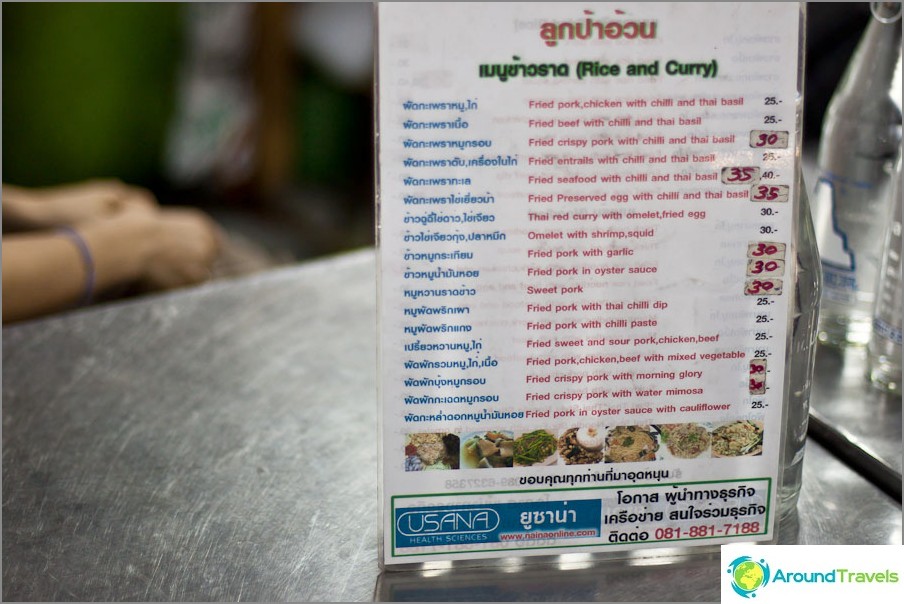 Thai menu in a simple cafe in Chiang Mai 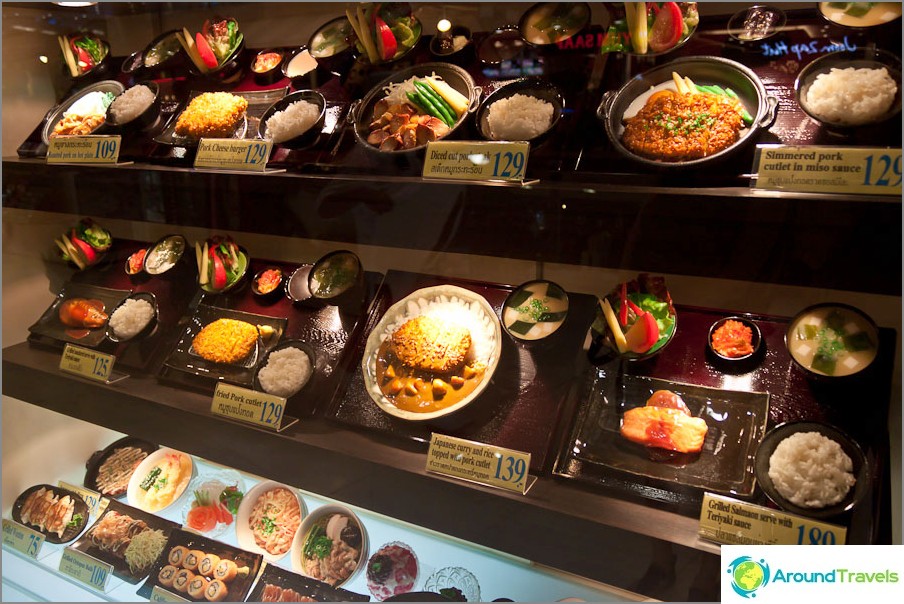 Prices in a cafe in the mall Phuket 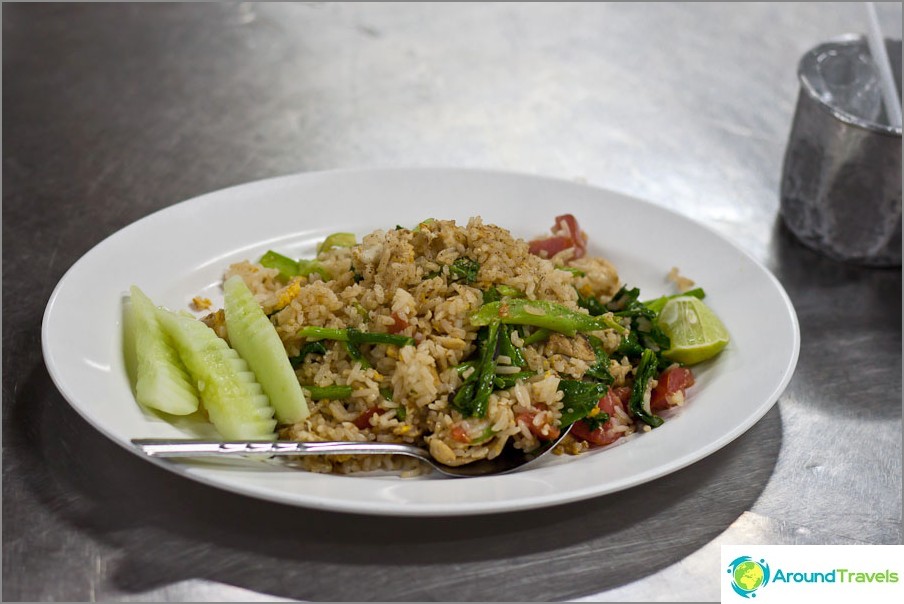 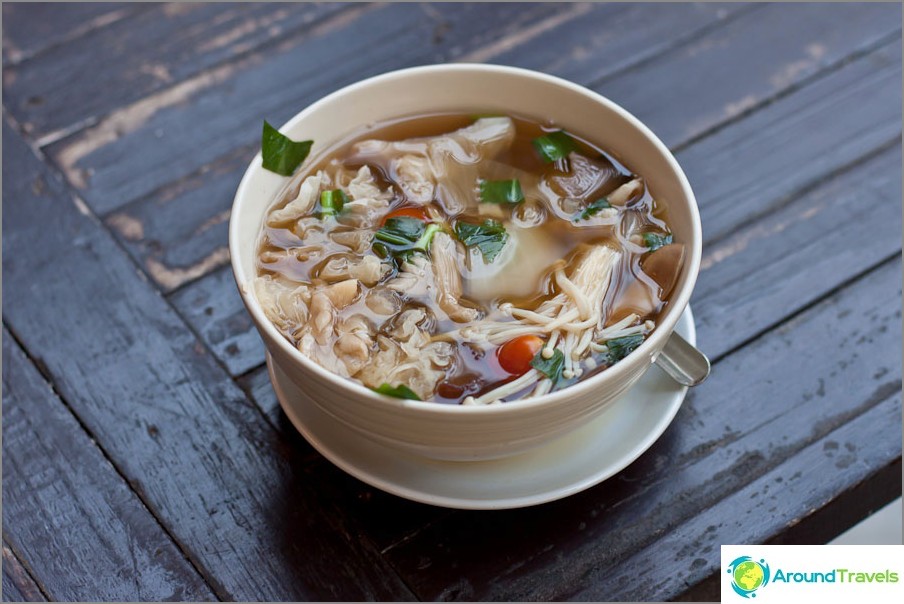 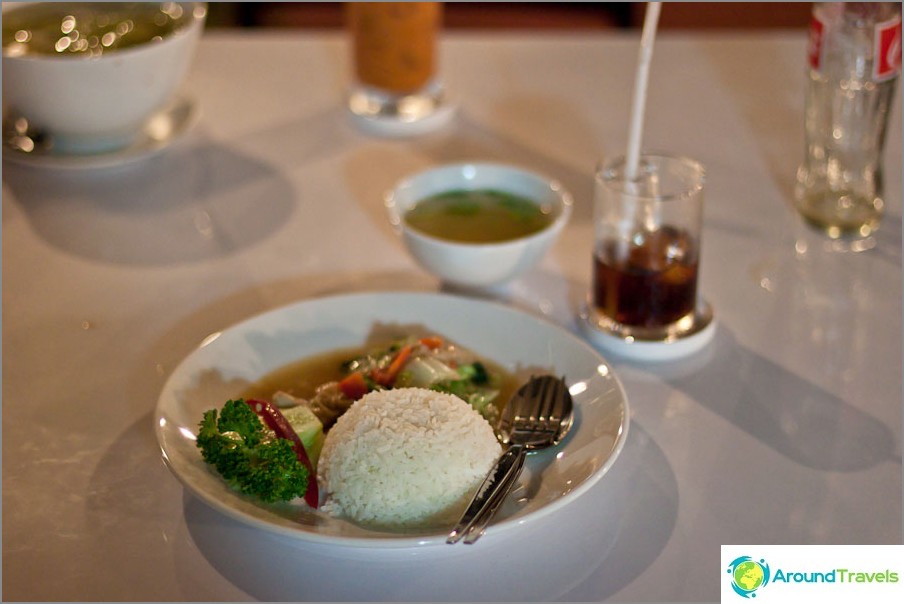 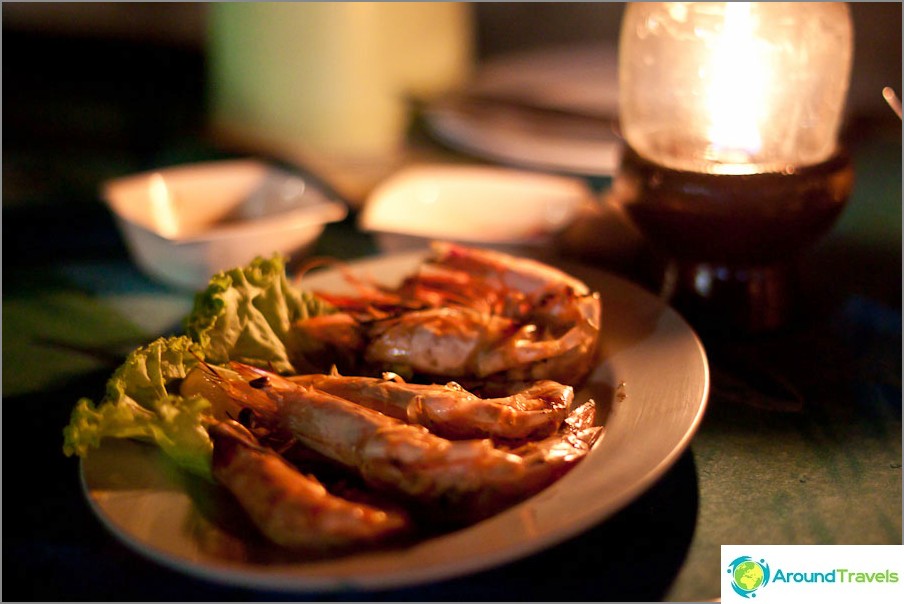 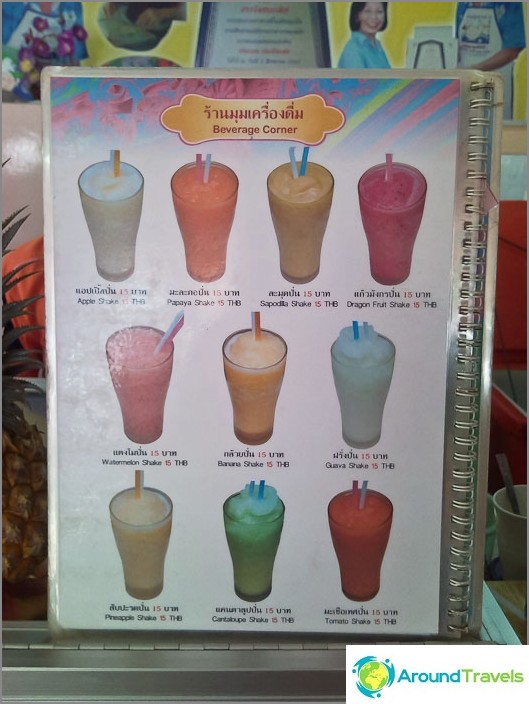 Fruit Necks in Phuket for 30 baht

As already mentioned, makashnitsy in Thailand canmeet on almost every corner. This is a kitchen cart on wheels, where you can buy soups, som-tam salad (made from green papaya), rice, noodles, pancakes, peeled vegetables or drinks.

In addition, all sorts of popularkebabs and barbecue. Everything that can be strung on a stick is smoked in the form of kebabs, the rest is just on the grill. Often, braziers stand right along the street, filling everything with very pleasant kebab smells. 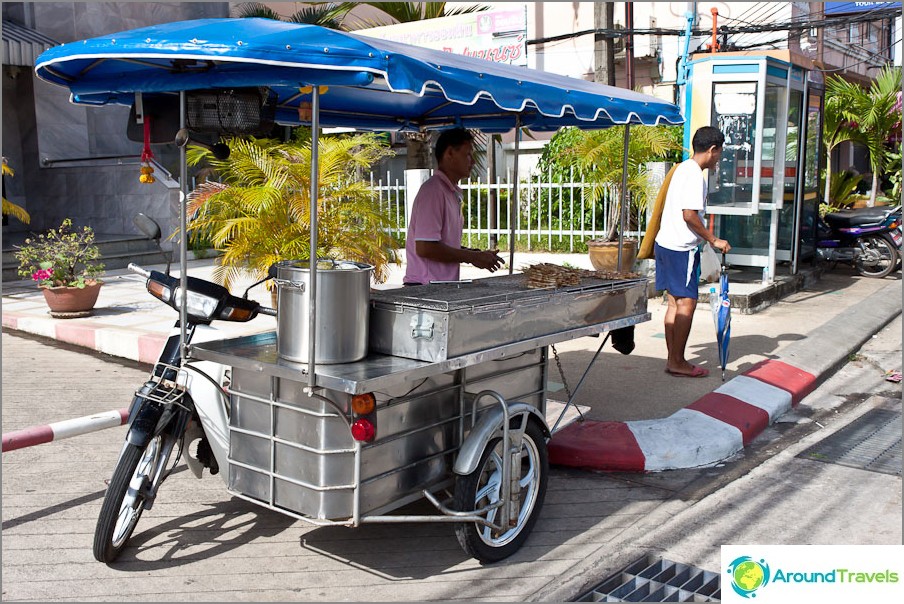 Food in Thailand on wheels 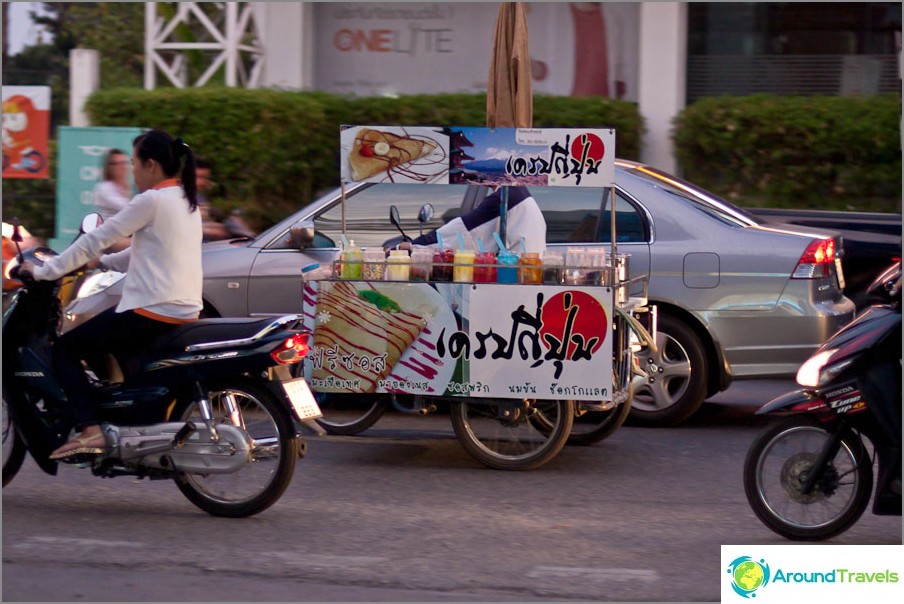 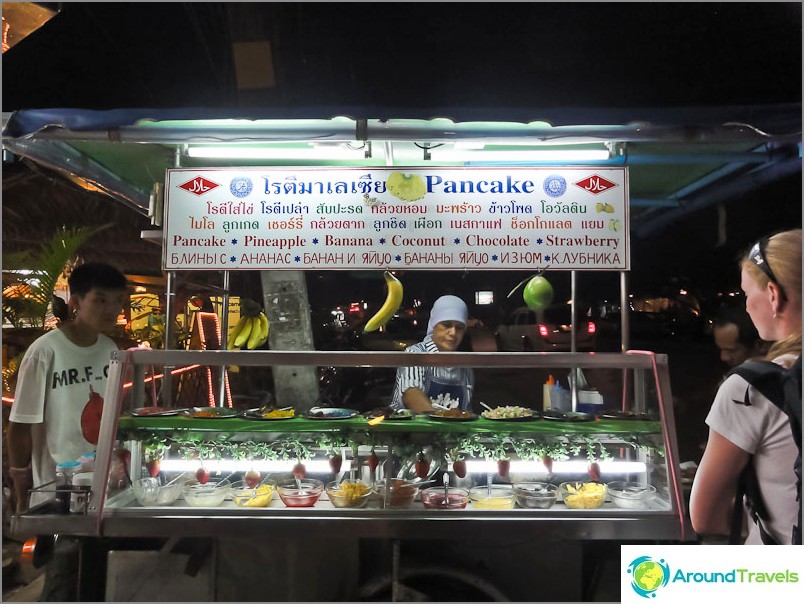 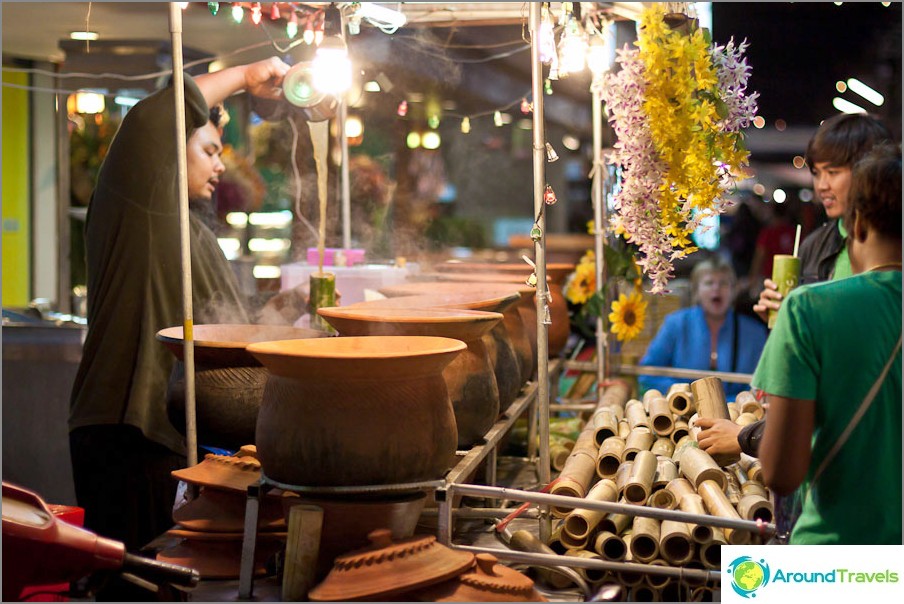 Tea on tap in Pai 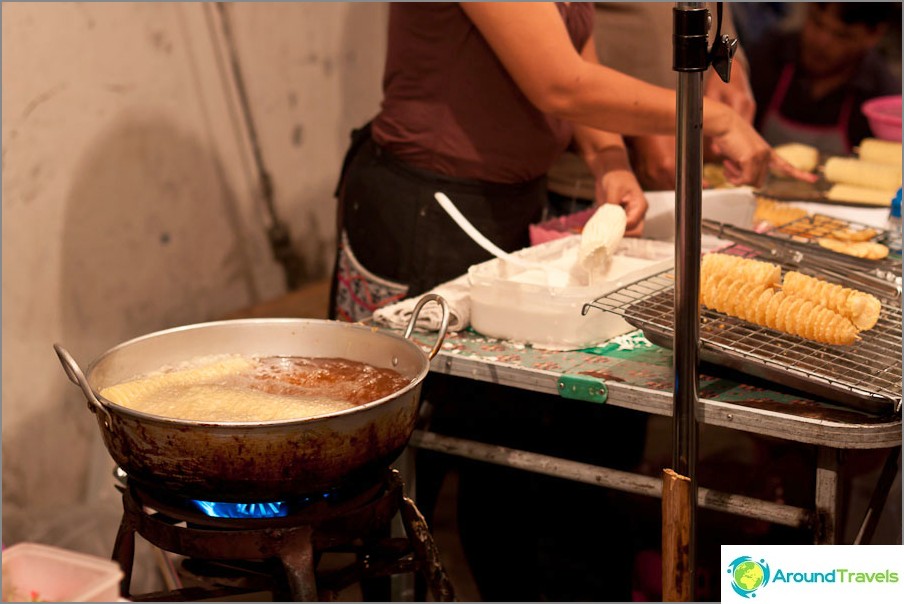 I noticed an interesting feature: the Thais themselves do not attach much importance to the place where they eat. Well, there are ordinary plastic chairs, well, there is a half-woven oilcloth on the table, well, shabby walls, think! Farangi (that is, you and I) prefer to go to more well-groomed institutions, where they can somehow sit more pleasantly.

The first time, the order of dishes I calledthe difficulties, since so much with meat, and I am partly vegetarian. And if there was no menu in English, then generally a pipe. A little later, I got out of the situation by ordering something with seafood. Usually they have either meat or sea. And after that, I adapted myself to explain in English or on fingers, that I generally just have rice with vegetables. And God forbid you to say "without meat" (without meat), only "no meat" (no meat). And then the first week we just blew the brain to the local people with our own and other words. Similarly, it is worth saying “no spicy” (not sharply).

Although, if you go to a popular resort,Phuket, Pattaya and Samui, then there will be no problems at all, the menu will include not only English, but sometimes Russian. Especially if we are talking about more civil cafes, but about them below. 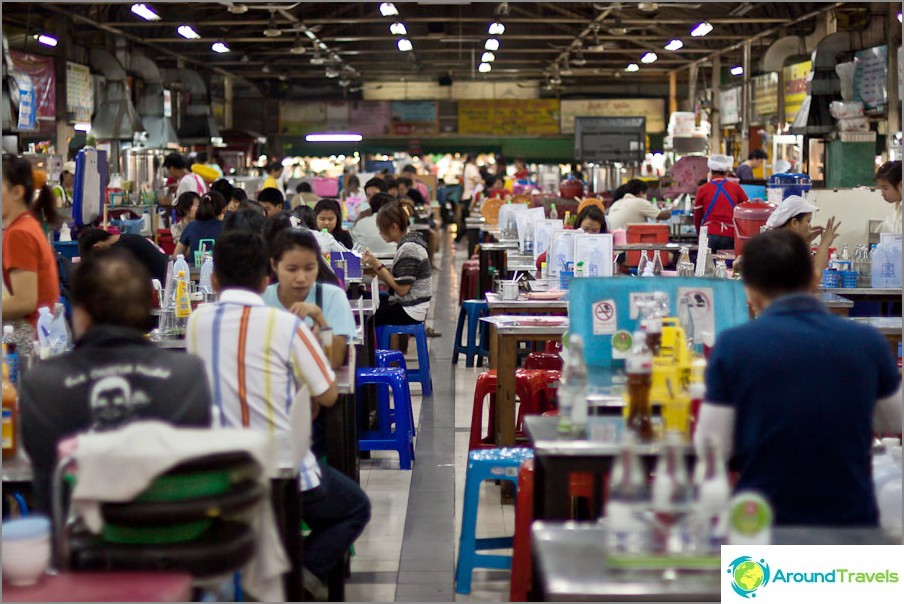 Thai food court on the market 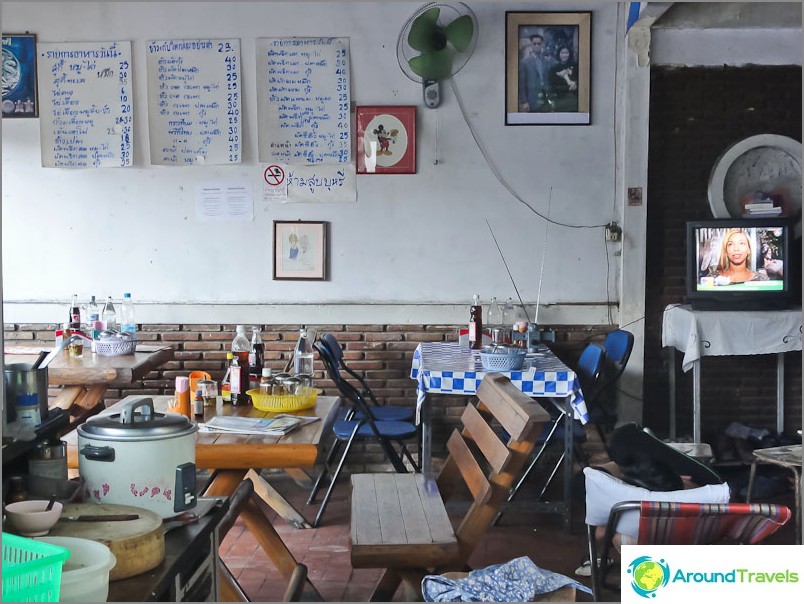 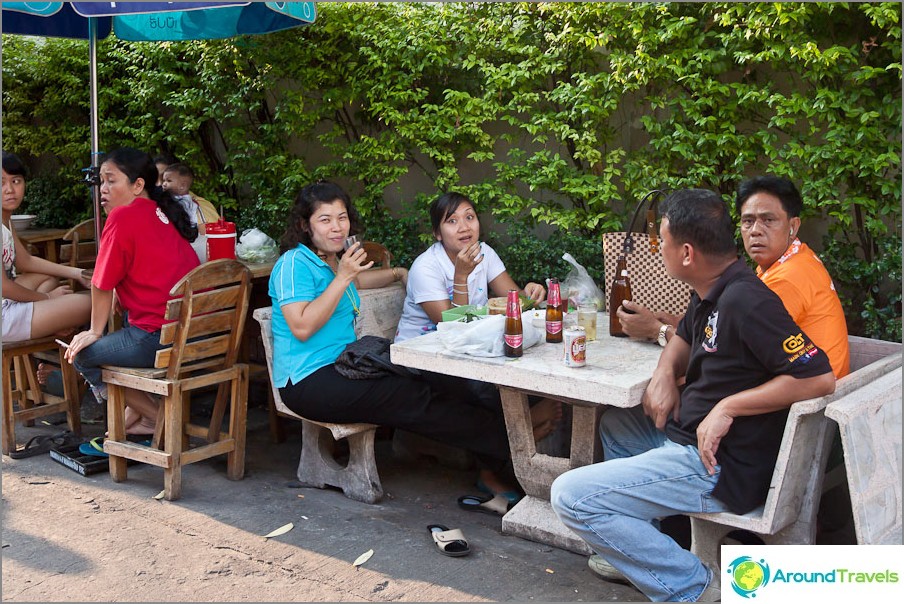 Cafe in the back street of Bangkok 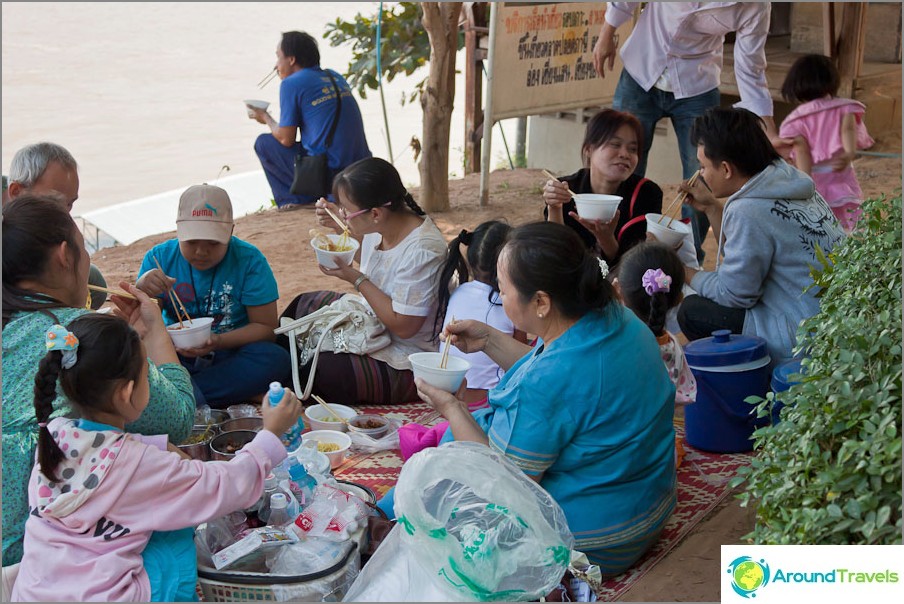 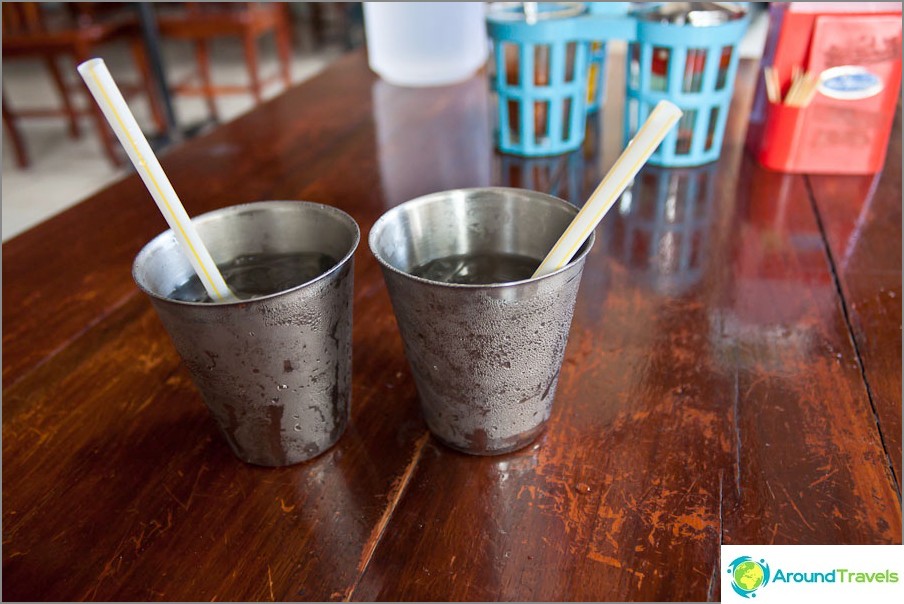 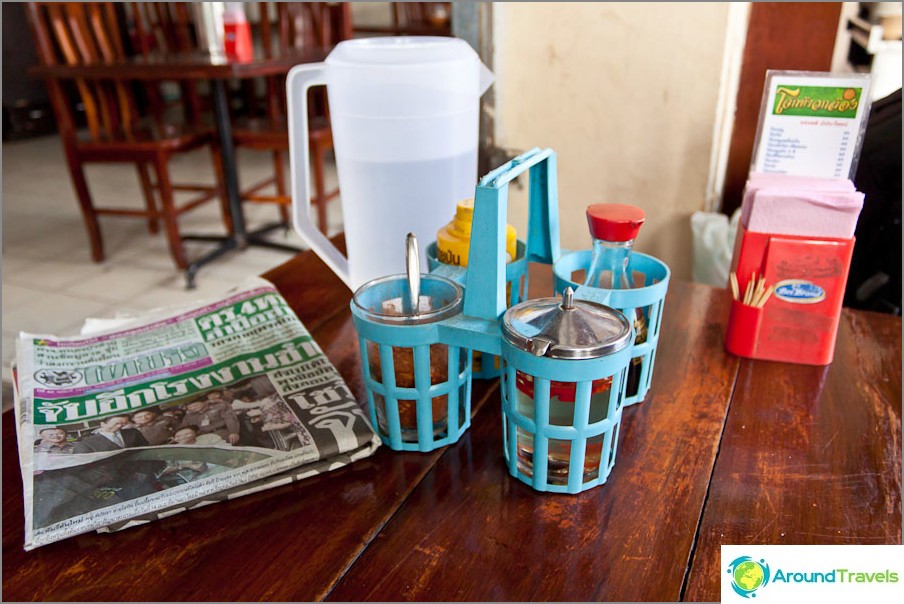 Traditional spice set on the table 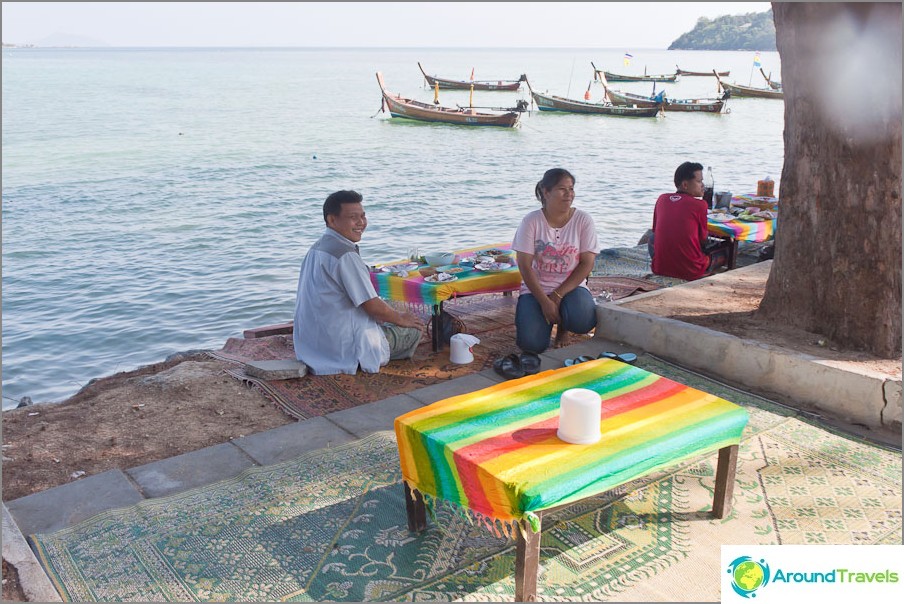 Coastal Cafe on Phuket in the afternoon

Cafe for tourists and foreigners

In popular tourist places there are no problems.find a cafe of almost any kitchen. First of all, this is European cuisine, all sorts of pizzerias, kebabs, hamburgers, sushi. Of course, there are Russian cafes, as without them. Often local cuisine is offered in a cafe for Europeans, but it is more adapted for foreigners there, almost spicy.

Of course, the interiors in such cafes are muchmore interesting, everything is clean and beautiful. Often it is a closed room with air conditioning. But prices are higher than in ordinary street Thai cafes. For example, we often ate on Samui in Mickey-mickey, good civilized cafe, where prices were 2 times higher than the ugly Thai cafes. 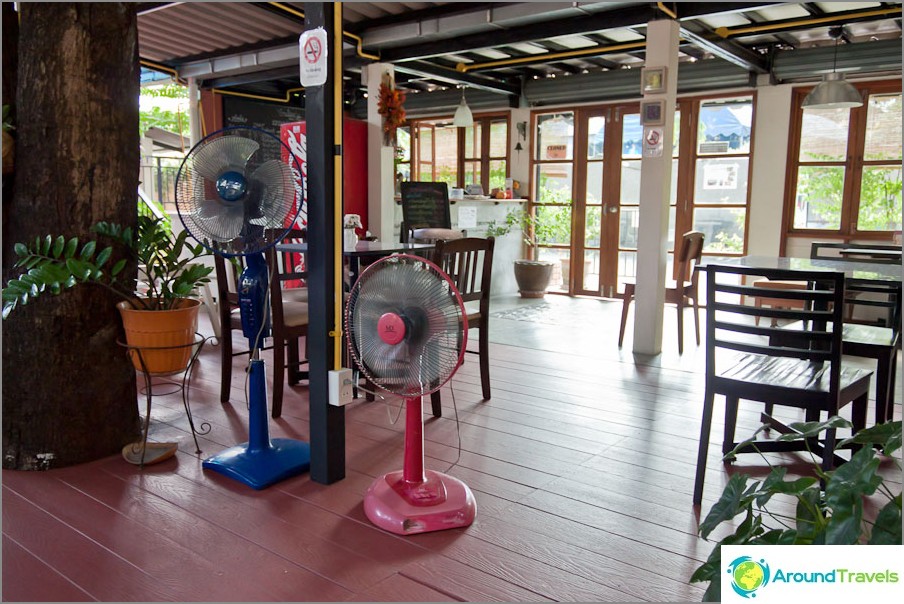 Cafe in Phuket - prepare yourself 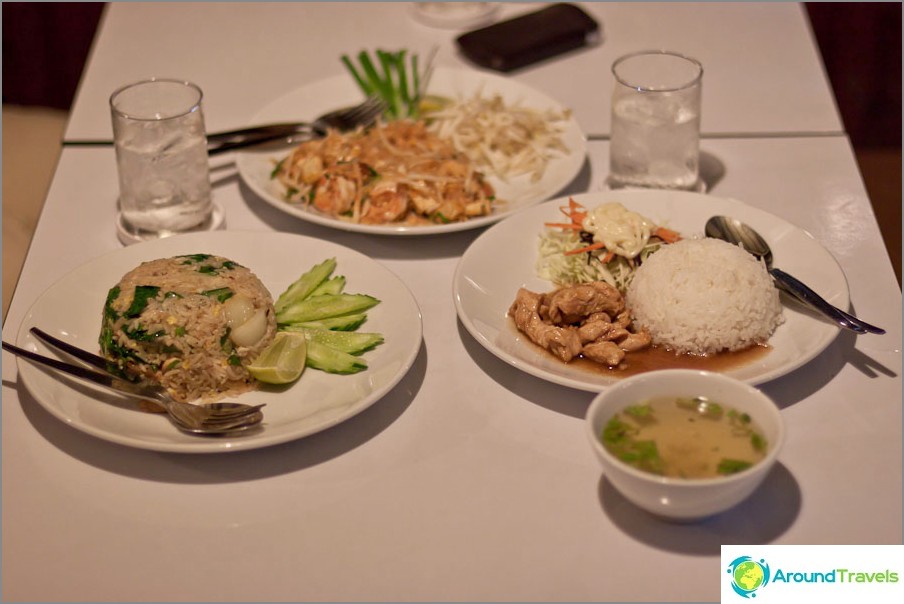 Our usual food in Thailand 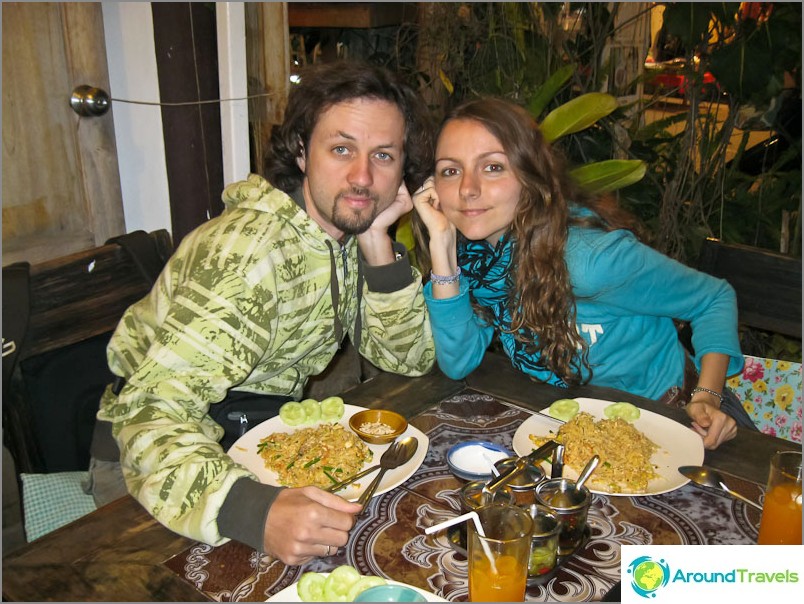 One of the best padtai

And for a snack video, about how to prepare Rotti, and how I tried the grasshoppers with the larvae

P.S. In the following articles I will tell about Thai supermarkets and Thai markets.

How much is Thailand - the answers to ...

Apple prices in Thailand on the iPhone, ...