Many questions and puzzles cause precipitation inThailand, especially among people who are going to visit this country for the first time. First of all, it is necessary to say what caused these specific climatic conditions. And they are caused by the fact that Thailand is located at the junction of tropical and subtropical zones. Therefore, it rains here, with varying intensity, year-round. In the period of cyclones, which are not uncommon here, especially in December - January, it may drizzle, then, as they say in Russia, “pour like buckets”. Therefore, if you are going to rest in Thailand, you do not need to indulge yourself with the hope that it is during your rest period that relative drought will occur - and then the rest will not bring unexpected unpleasant surprises. 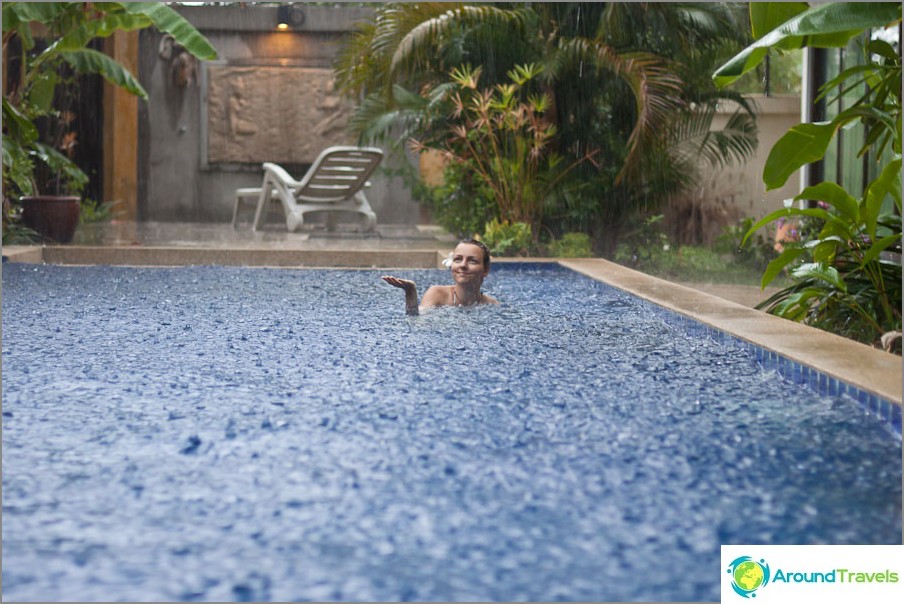 In general, the entire territory of Thailand can be divided into 4 parts:

1. The northern part. It most of all answers our ideas of the developed seasons. And in winter there is even zero temperature here. No, you probably won't see snow, but frost is not a rare occurrence.
2. The central part (Bangkok, Pattaya, Hua Hin);
3. The Andaman Sea area (Phuket, Krabi);
4. The coast of the Gulf of Siam (Samui, Koh Phangan, Tao).

The climatic season of the central part of Thailand and its southern side can be divided into three components:
- hot season,
- very hot and
- rain season.

And if the hot season is more or less stable, thenthe rainy season everywhere goes differently. And, in particular, on the coasts, it can be in a different period of time. If you fall under the rain in January, do not think that this is it - the rainy season (because the season is a relative concept, due to the fact that it rains here, I repeat, it goes all year round). The rainy season in January would be more appropriately called the monsoon season. In the Andaman Sea, it begins at the end of May - early June and lasts until October, and on the coast of the Gulf of Thailand from November to January.

You can read more about temperature and other climatic features in the article. Weather in Thailand for months.

For example, take the island of Phuket - one of the mostmost popular places to visit by our tourists. This island is washed, just by the waters of the Andaman Sea. The bulk of precipitation in the form of rain on the island falls in August-September. But the weather, as if aware of the fact that people come here, almost from all over the world and sends rain to the earth mainly in the evening and night hours, thereby washing away the dust, dirt and heat that accumulated during the day. But even if the rain hits you in the daytime, flooding the street to the very knee, you can be sure that in an hour there will be no trace of it. At the same time, the monsoon season is famous for its waves due to the prevailing winds here, which cannot be appreciated by surfers.

For a month in Thailand

We hit the tv!