I saw from my friend photos on Facebook fromhis trip to Sochi and asked to write a short note on how everything is ready there, what is done and what is not. I myself was going to take a trip and see if there was no trip to Thailand, so I was doubly interested to see his status in the social network and photos.

Somewhat spontaneously, my wife and I decided to go ona couple of days in Sochi. The goal is trivial: take a walk at the surf, admire the mountains, drink wine at sunset, as well as find out what the city looks like a month before the start of the 2014 Winter Olympics.

Immediately make a reservation - the task of making a report for the blog did not stand in front of us, we saw (and filmed from what we saw) we are not all. The story does not claim to be complete, but claims to be honest.

We settled in Adler (in this Sochi district andOlympics will be held) in a hotel near the train station. A hotel representative met us by car at the airport (transfer is included in the room rate). The first impression is the road. We got to the hotel on a flat free highway without a single traffic light in five minutes, I really did not have time to see outside the window. The second impression is the hotel. Friendly staff, a new, cozy, albeit small, room, a balcony overlooking the sea, a rooftop pool. Room rate (4200 / night) no longer seemed unrealistically high. 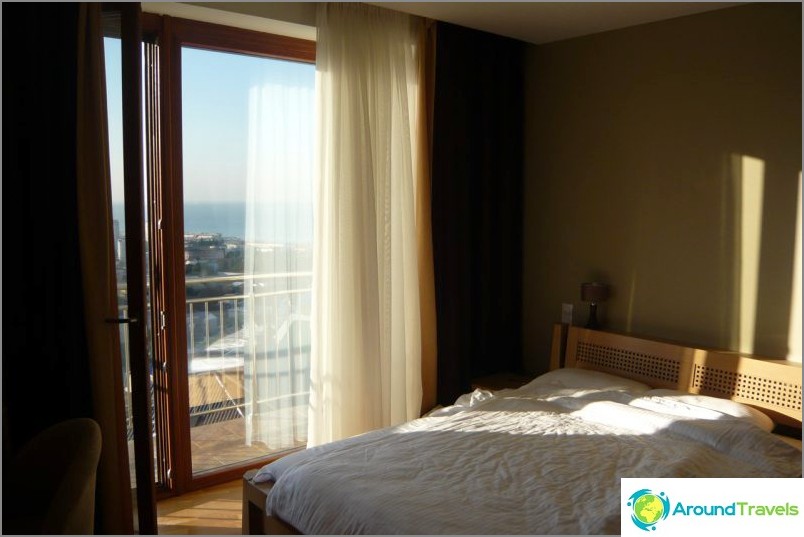 Room at the Diana Palace Hotel in Adler

As soon as we left the hotel, a more prosaic picture was revealed ...

The city around the central highway looks like a hugeconstruction site filled with construction and household waste. The quality of work is three minus in a good mood, a solid “unsuccessful” in a bad one. It seems that they are building from the cheapest materials on the cheapest projects with the involvement of the cheapest labor. As a result, the finished object looks like an old shabby time: the concrete crumbles, the tiles are chipped off, the paint is peeling off, and the railing is covered with corrosion. 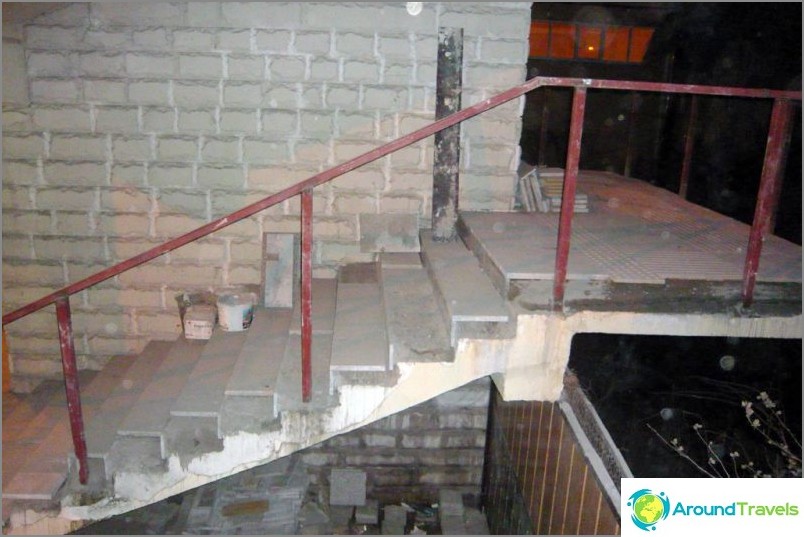 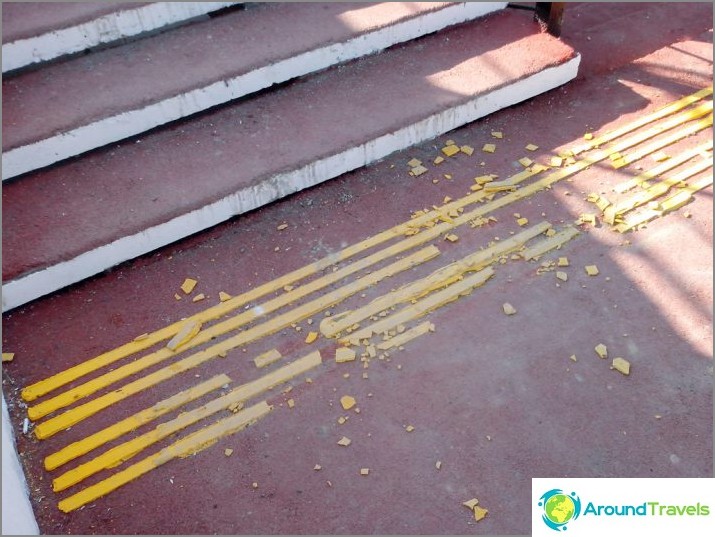 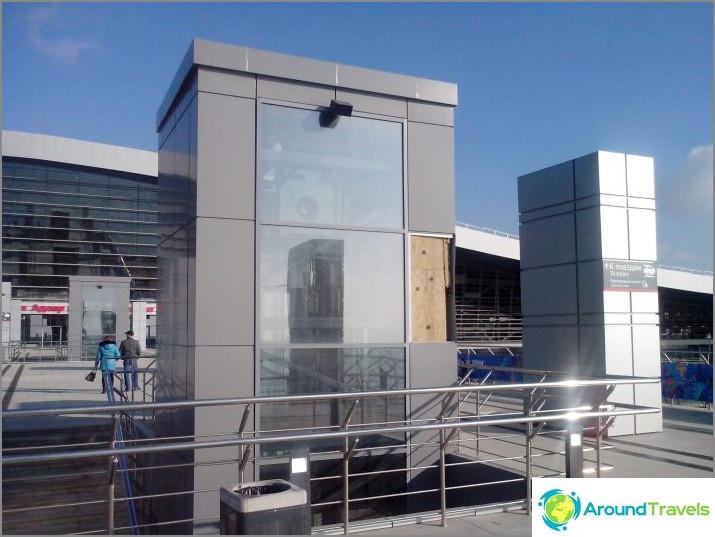 The stove has already fallen off, and half of the glasses are missing in the station building

Another impression: the unreal size of freshly constructed objects. Adler Station is more like an airport, although it is far from a central station. 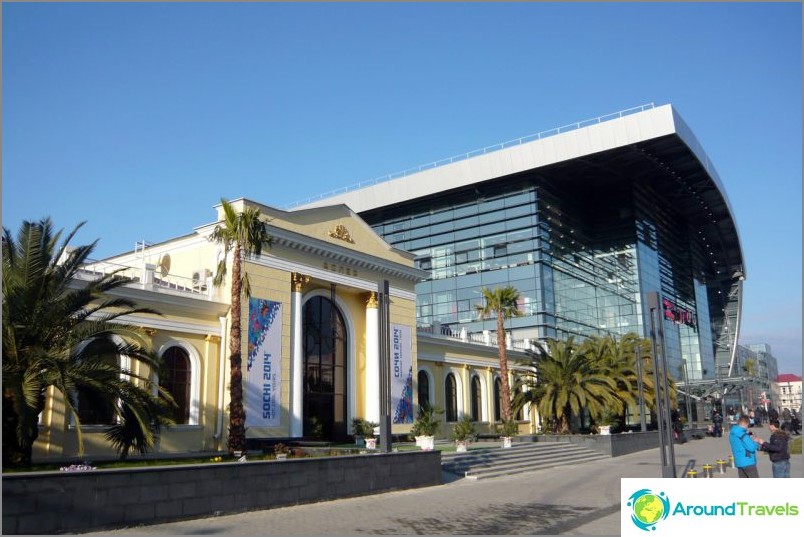 Old and new stations of Adler

A huge multi-level interchange in the city centerand in fact only a crossroads connecting Krasnaya Polyana, the airport and the Olympic Park. Huge spaces in the Olympic Park itself, built with buildings with an incomprehensible purpose. 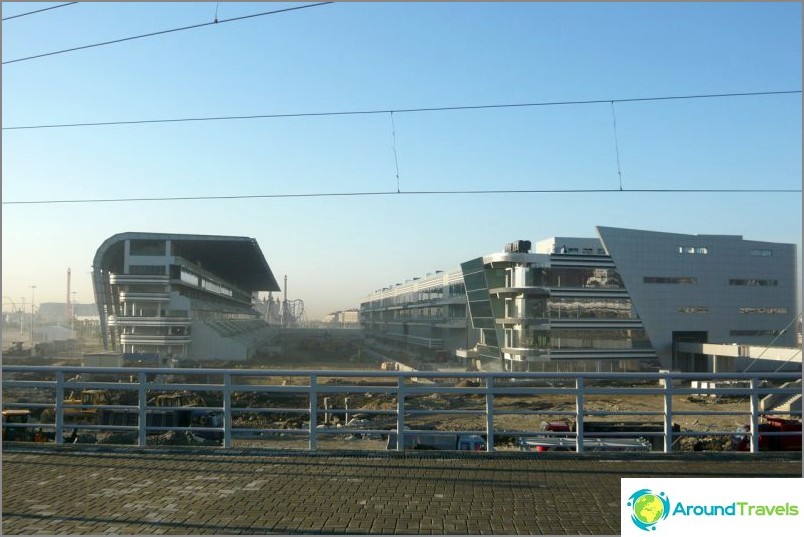 A question that kept spinning in myhead: what is it all for? Why does a significant part of the most famous resort place of Russia now resemble Moscow in the area of ​​the Third Ring Road?
When seven years ago they decided to conductOlympics in Sochi, I imagined such a southern comfort, where under the shade of magnolias and surrounded by palm trees and fountains, athletes walk with fans and hang out in numerous cafes and disco bars. This would really be the highlight of the “Olympiad in the subtropics” ...

I am convinced that the main task of what is now inrush to finish in Sochi, - make the right picture on TV. From above, with a panoramic shot, all objects probably look impressive. And below - the complex of stadiums reminds a jumble of several warehouse hangars surrounded by a security zone. 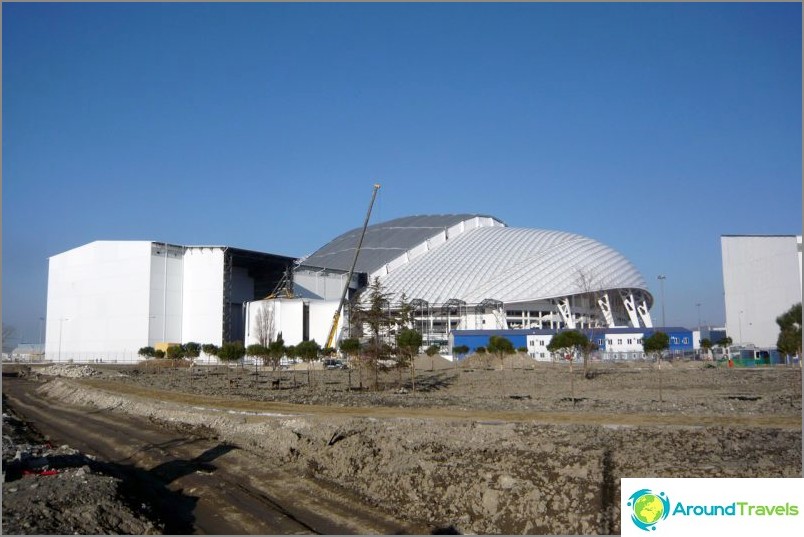 Architectural masterpieces of the Olympic Park 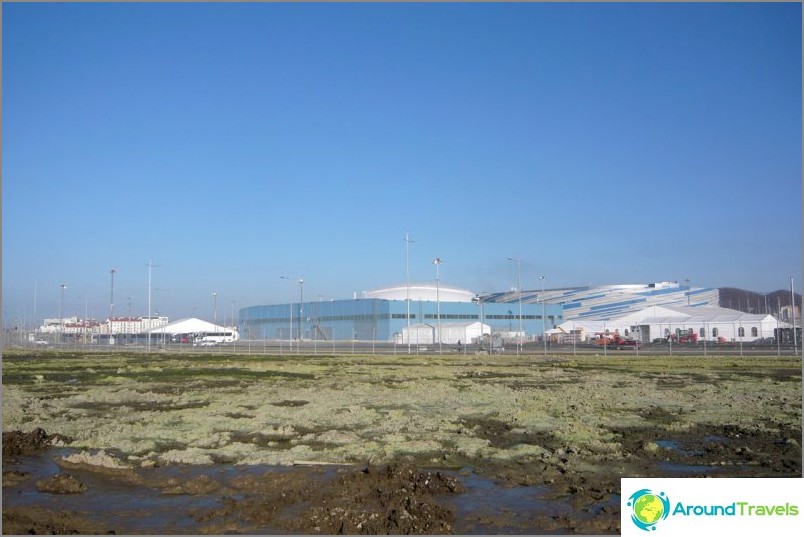 And why is the dirt around painted in greenColour? That's right, because on TV you need to show green grass around, no matter that in order for the grass to grow, it needs to be planted in the warm season.

Honestly, we prepared for the trip.bad, and, leaving for one day in Krasnaya Polyana, poorly represented, where and what Olympic facilities are there. Therefore, I share my impression of the place as a whole.

1. The road. The notorious road for astronomical money, judging by the result, is still not worth it. If it was not a pity to build a new railway through all the mountains, then it makes sense to make the train travel at maximum speed. Well, at least 150 km / h (as they are even building in developing countries). In fact, the way from Adler to Krasnaya Polyana with a length of less than 50 km takes more than 50 minutes.

2. Rosa Khutor. A nice ski resort, however, was not designed for the number of visitors that was on the day of our visit. We were lucky, we arrived early. In the afternoon, in order to get a ticket for the lift, you would have to stand for an hour at least, as well as beating at transfers. 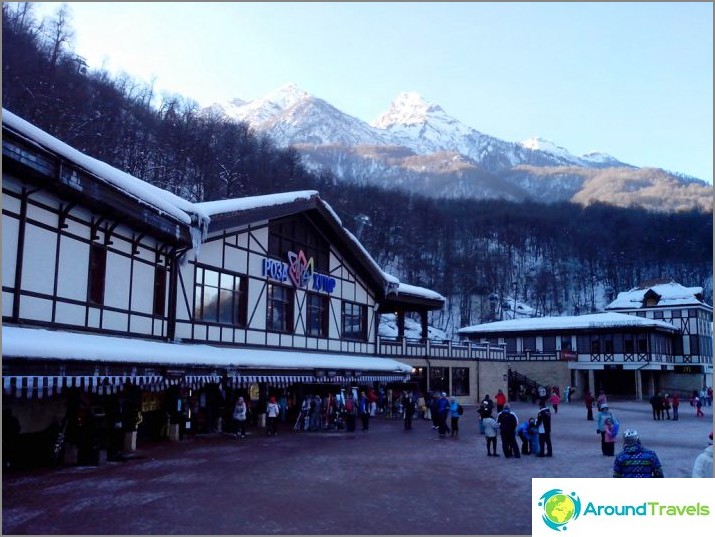 Rosa Khutor at the foot (morning) 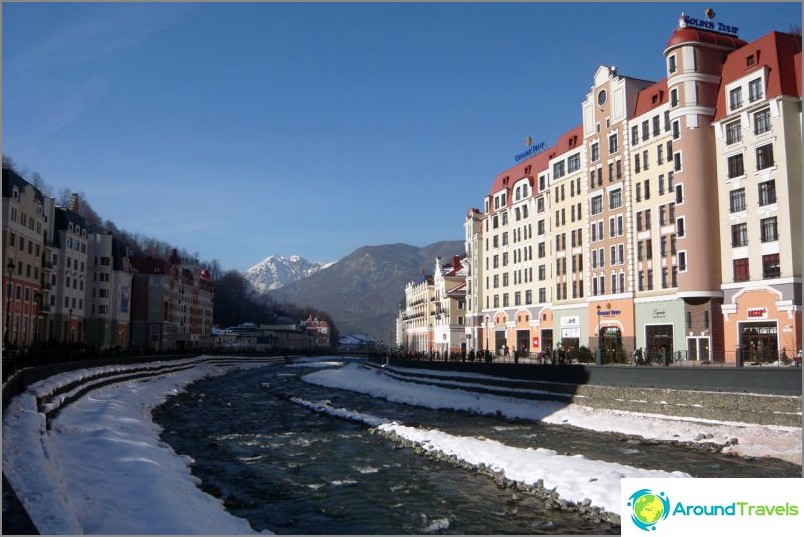 3. Trails. Snow, apparently, enough for everyone (if anything, cannons will finish). But now it is quickly melting, in the daytime in clear weather in sunny areas the snow turns into slush, because the temperature is stably positive. On the opposite slope, on the sunny side, the snow remained only on the tops, therefore, if it is not piled up (or the slopes are not painted with white paint), on TV we will see a completely non-winter picture. Otherwise, although I am not a skier, I could check out the great variety and length of the tracks. It should be interesting to ride here. Let's hope the weather is lucky. 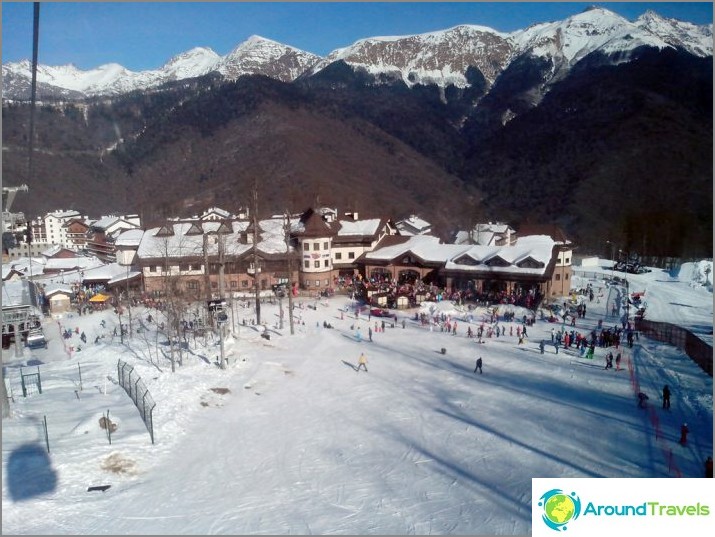 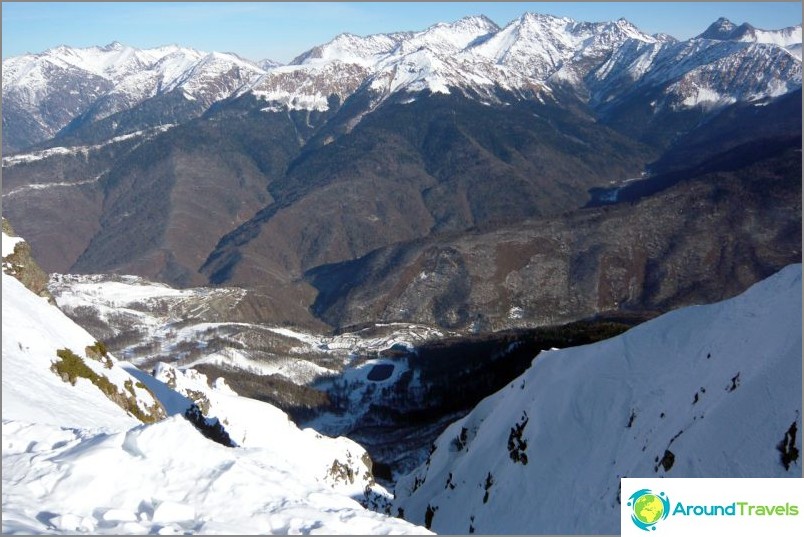 View from the top, from where all the great tracks

4. Service. Restaurants and cafes are few and expected roads. In the largest and conceived budget café with the shocking name “Cho? Kharcho! ”You can wait twenty minutes until you are approached, and the hall manager is convinced that four tables for one waiter is“ already a lot ”. Do not go there, and if hunger does not allow to return calmly to the coast, it is better to eat in one of the hotels. We had a good lunch buffet costing 800 rubles per person. The cafe will be more expensive. In addition to cafes, no "entertainment" in the public domain was found.

After all, you need to write about the positive. Moreover, it is really present. I liked that we almost restored the new embankment, which was destroyed by the autumn storm (for a long time, we will find out after the next storm, as long as it passes after the Olympics).

Away from the Olympic Park, almost all objectsdirectly on the shore remained intact (although it was possible on the sly and get their hands on). So now there you can eat in a cafe for a delicious kebab for 150 rubles. 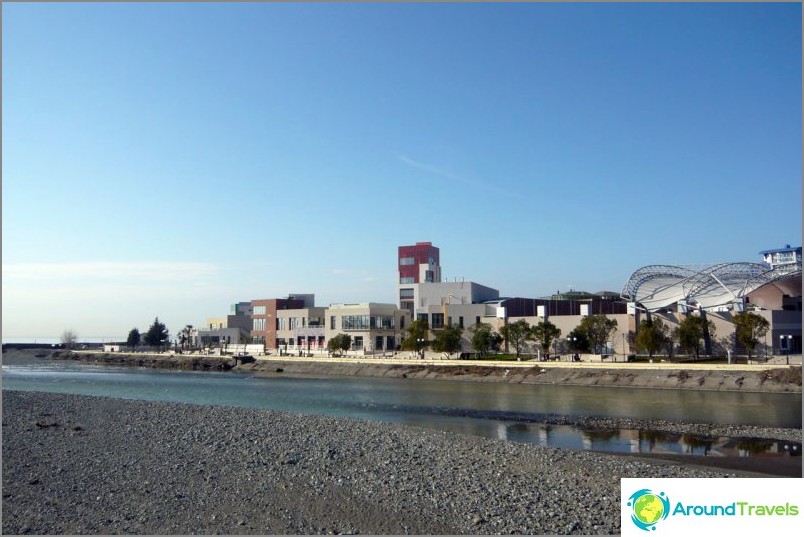 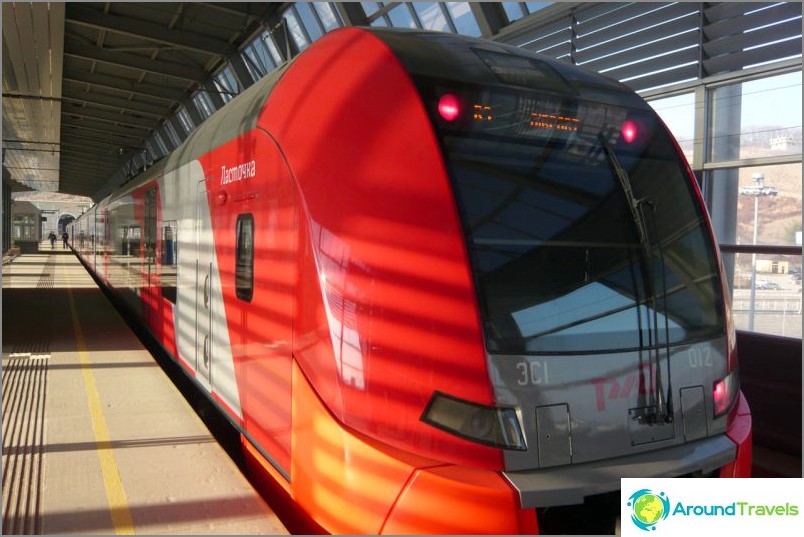 New, comfortable and quiet electric trains produced by Siemens along the coast at a price cheaper than minibuses

The Olympic Village is built, only the embankmentapparently not quite have time to finish. There is a true reason to believe that the Olympic Village was given special attention, since this residential complex will be further implemented as luxury housing. 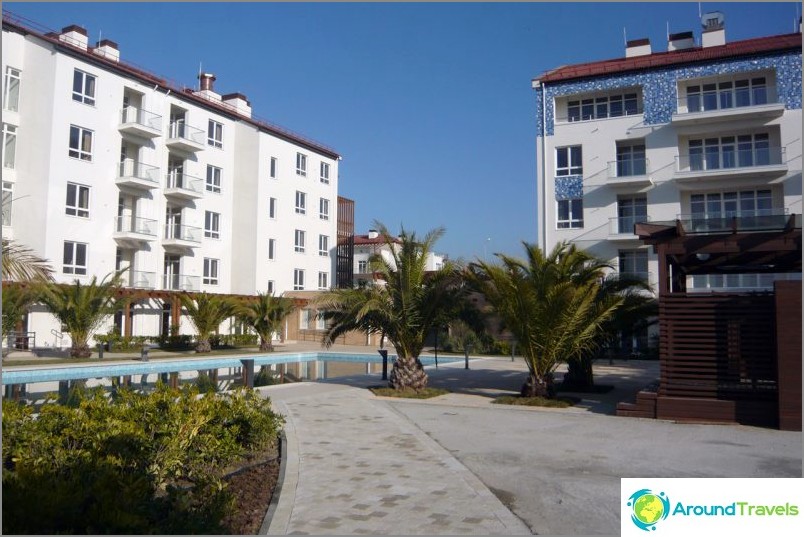 Inside the Olympic Village

Especially liked the positioning of Sochi as a city free from smoking. Everywhere social advertising and related signs. Locals and the truth in public places do not smoke. 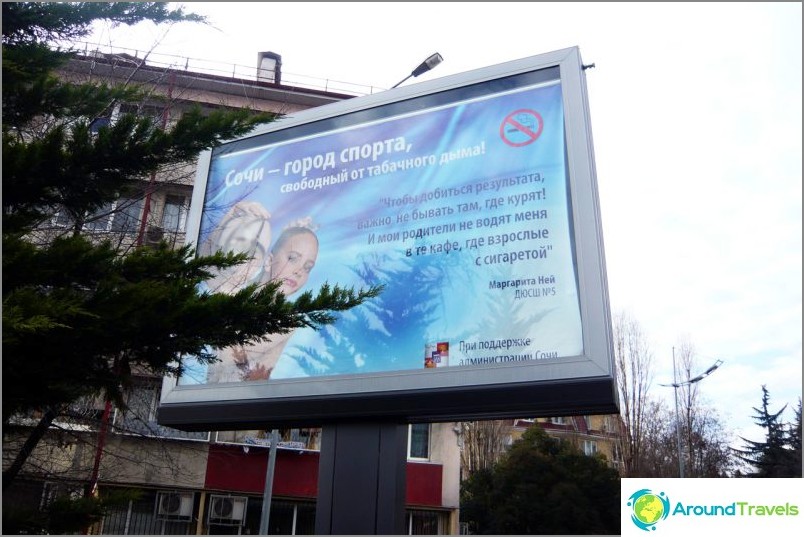 Advertising intolerance to smoking in Sochi

Among them are two categories: "Olympians" - involved in the preparation of the Games, they wear robed Olympic symbols and drive around on Volkswagen (the official sponsor), and "local business" - those who have a special regime imposed in the city, seriously limited the ability to earn. The latter, of course, are dissatisfied and ready to talk about it for a long time. They are forbidden to go to the main road by private transport, someone else’s trade has already been covered up, someone’s gathering. Many do not know whether they will work during the Olympics, or they will have to rest at their own expense.

Does not fit in the head

Some things of their illogical openeddownright new horizons in my picture of the world. For example, duplicate tablets for the blind in Krasnaya Polyana (do many blind travelers go there to ski)? Or unpretentious openers with symbolism and alyapisty design for 850 rubles. Fly until you have disassembled! 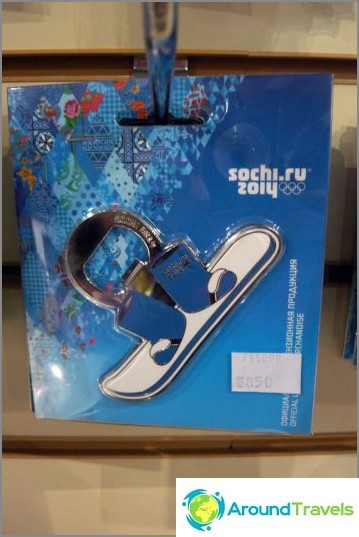 So, if you think about it, and a hotel room is quite inexpensive, it turns out - literally 5 openers

Especially surprised security measures. Police outfits are assigned to each intersection and stop. I didn’t see so much of the police even at the match Spartak-CSKA. And with all this, we managed to freely get into the empty Olympic village, from where we were not even going to be driven out.

The route of the Big Sochi - Adler is guarded by somecompletely paranoid methods. Often the route goes along racks, so each pylon is equipped with four cameras and four more cameras monitor the cameras on the pylon. How many people serve such multidimensional broadcasting (and whether they serve it at all) remains a mystery. 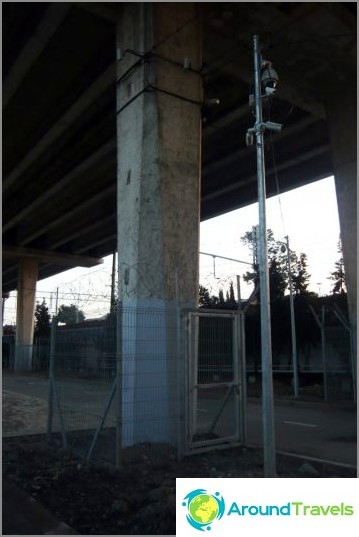 In the dry residue

In the place of ordinary Sochi citizens, I could presentonly two complaints to the organizers of the Games: inappropriate use of the vast areas of the resort town and poor-quality work, which will soon require additional money, from the city budget. Well, some temporary inconveniences do not count. Nevertheless, the city received infrastructure, which has never existed and which can be used for a long time.

If you think about what is comingthe event the entire world community will judge how effectively Russian business is able to use the investments, then the claims will come out more serious. The investor, after all, is not important how the result of their investments will look from a helicopter, but how much he will really justify his expenses. And here the organizers of the games still show a rather negative example.

But if you put yourself in the place of theinvestor (it’s not difficult: if you have ever bought something in Russia and paid the tax, you already are), then the contractor will want to demand a penalty - both for the project and for implementation. Unless, of course, it matters to you what your money went to.

P.S. In the network, the Olympics are now widely criticized, in my opinion, completely out of business: “The Winter Olympics are in the subtropics!” It takes place in the once picturesque places), "In Sochi, there is no place for spectators to live!" (in the high season Sochi easily accommodates a million holidaymakers, and do not collect so much at the Games).
I urge everyone to be objective, in the end, to see where our money goes, is in a sober mind.

From Thailand to Spain without regrets!