Temples of Chiang Mai - in the old city (inside the square)

Once upon a time we walked through the temples of Chiang Mai,but something hands did not reach lay out the photos. Then I once again walked in the square and also photographed. In general, so that the material does not disappear, I raise the archives

I personally like the old city in Chiang Mai. Narrow streets, pretty quiet around, somehow everything is neat, Guesthouses are pretty and a lot of backpackers. If you come here for a short time, then it is here to stay, this is an excellent base point for viewing all sorts of different Chiang Mai Attractions (hotel can be booked on RoomGuru). But you can also walk around the nearest temples, inside the square. Even I would say it is worth walking, especially if the Thai temples have not really seen.

Almost the most famous and revered temple inChiang Mai. Built in the 14th century, and the main building here is Chedi Luang. It once kept the Emerald Buddha, which later fell in Laos, and now located in the complex Royal Palace in Bangkok.

The stupa used to be under 90 meters high, but itsdestroyed by lightning and now it is 60 meters. In one of the niches is a copy of the Emerald Buddha. Also in the area grows a very old tree, which is a shrine, like all the old trees in Thailand. Behind the main temple there is another one, Wat Lak Muak. It is smaller, but no less beautiful, especially in the dark. Next to him are the statues of the Reclining and Sitting Buddha. Actually, I liked to walk here in the evening. It creates a slightly mysterious atmosphere due to the old stupa and lighting. But in the afternoon to me monk tried to pester 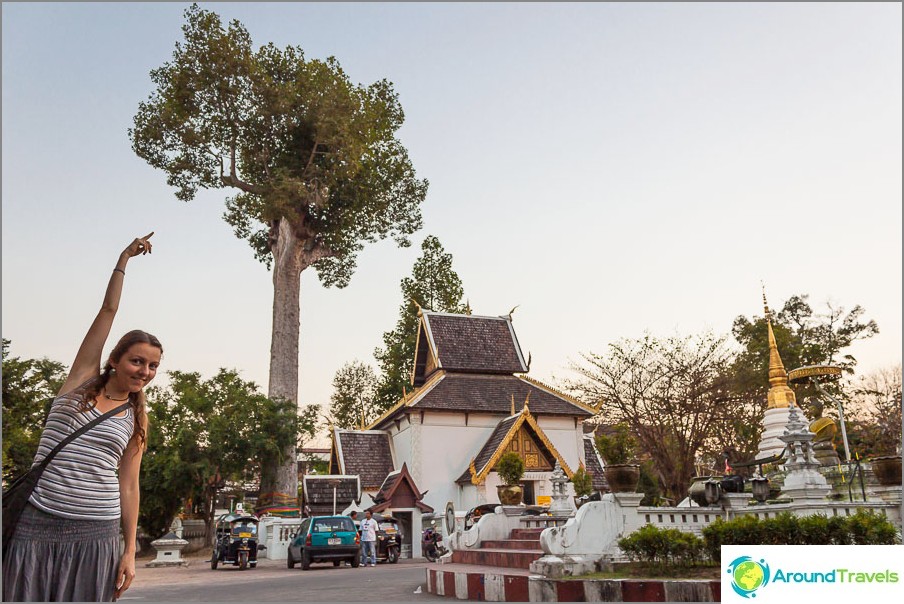 Tall tree near the temple 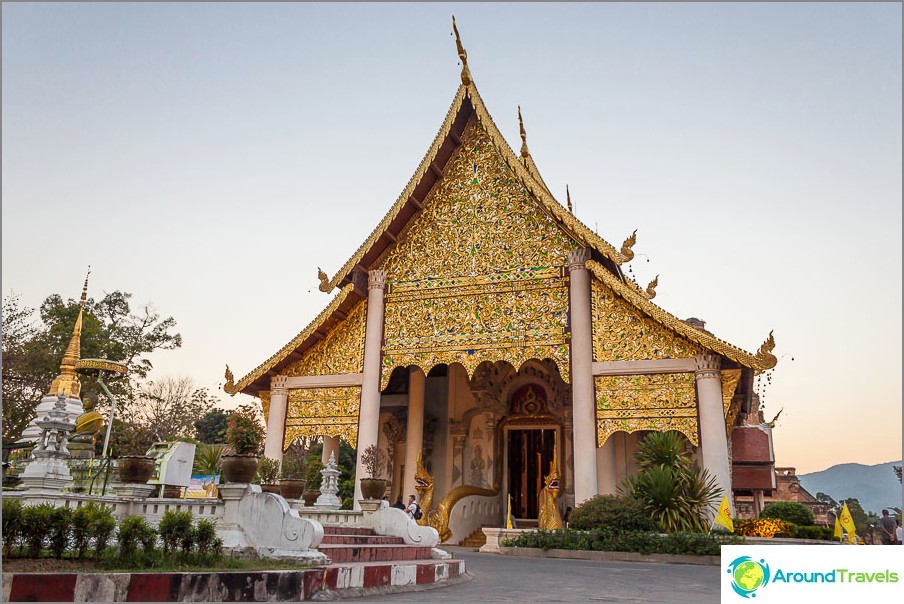 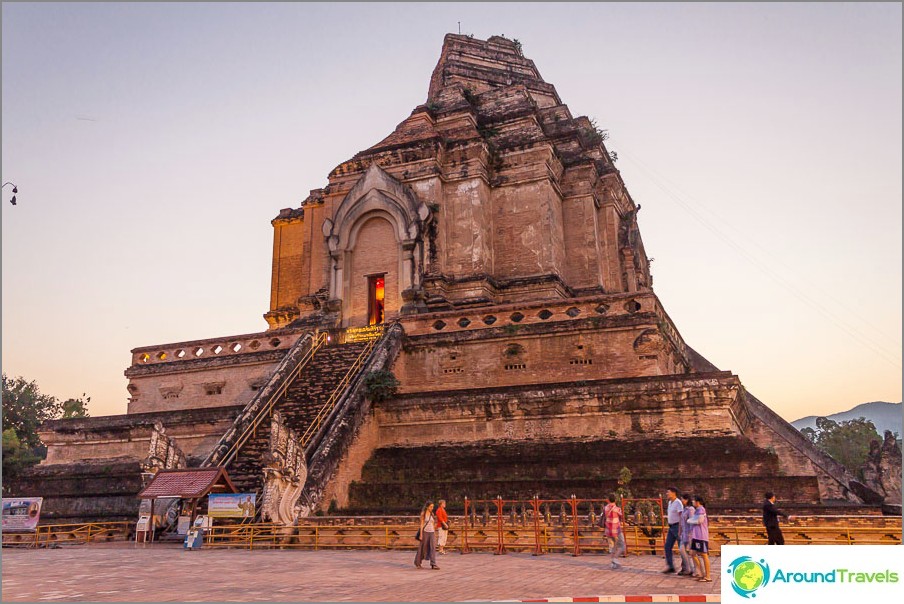 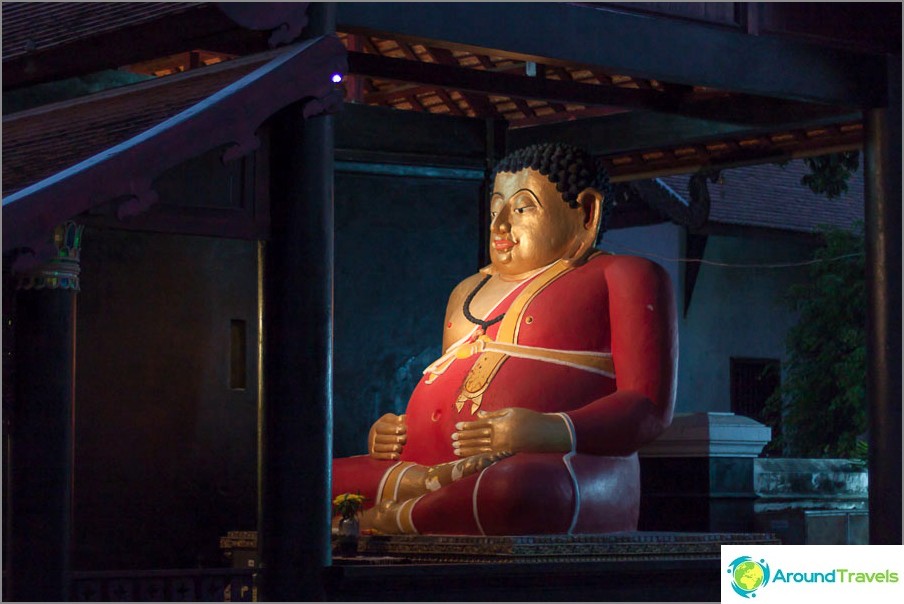 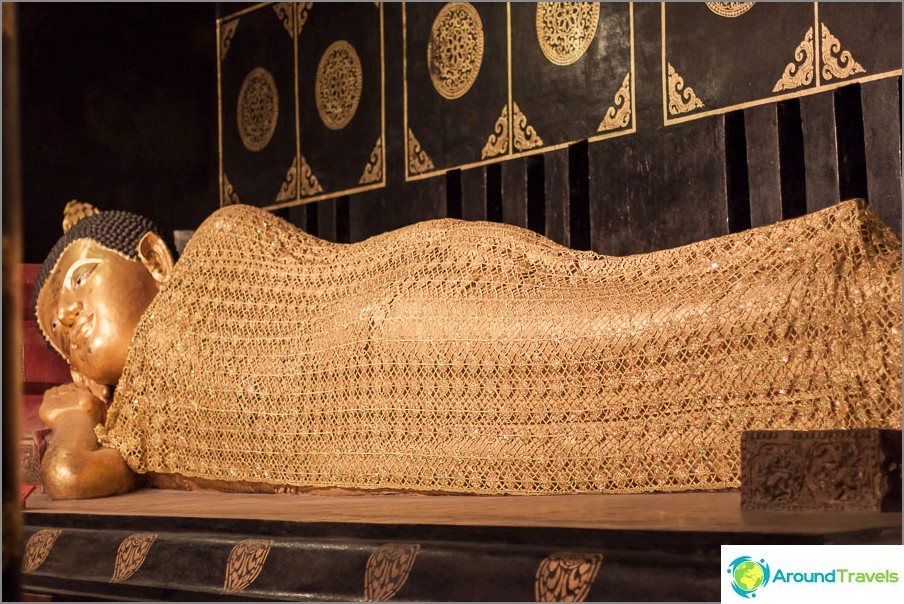 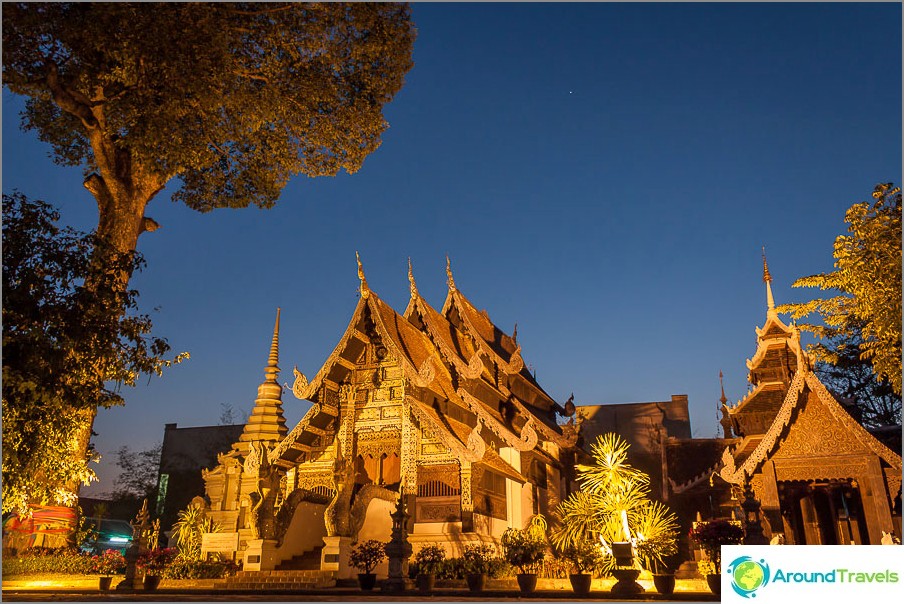 Lac Muak Temple in the night

Are right next to the previous one and it ispart (albeit in a separate small area), so it does not need to specifically look for. It reminds me of some rural church: the building is wooden, there are straw stupas nearby, I was offered to let out birds for money near the entrance, there is a small pond. 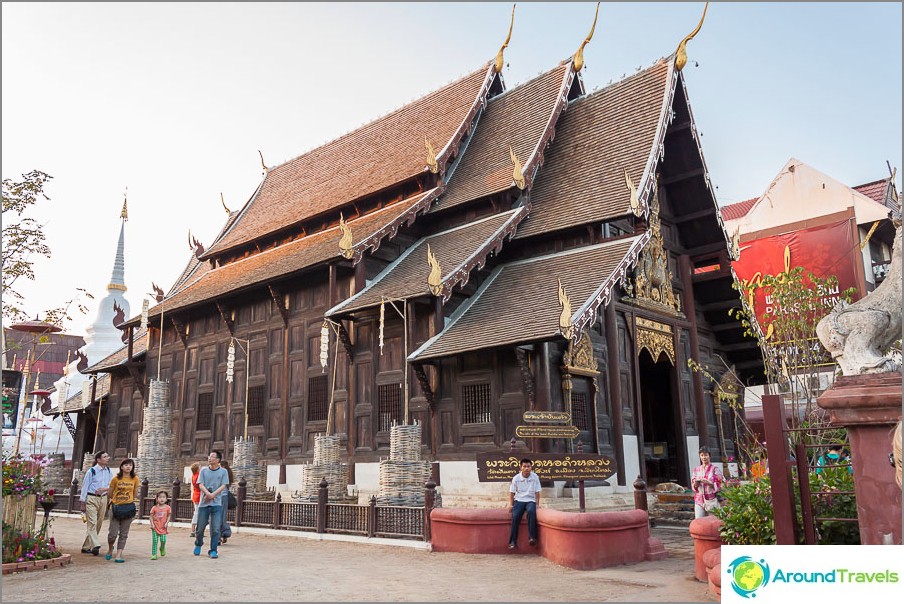 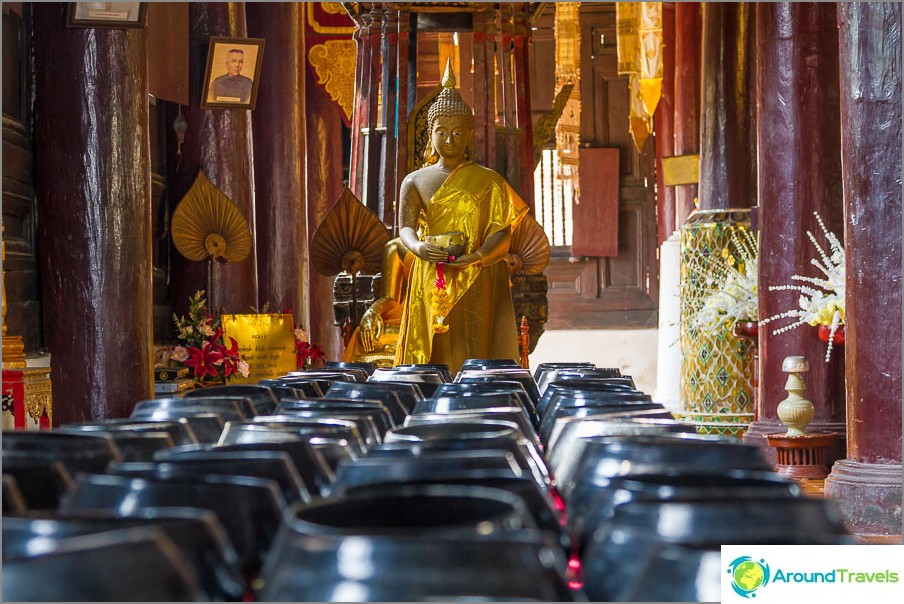 Inside the temple is pot artillery 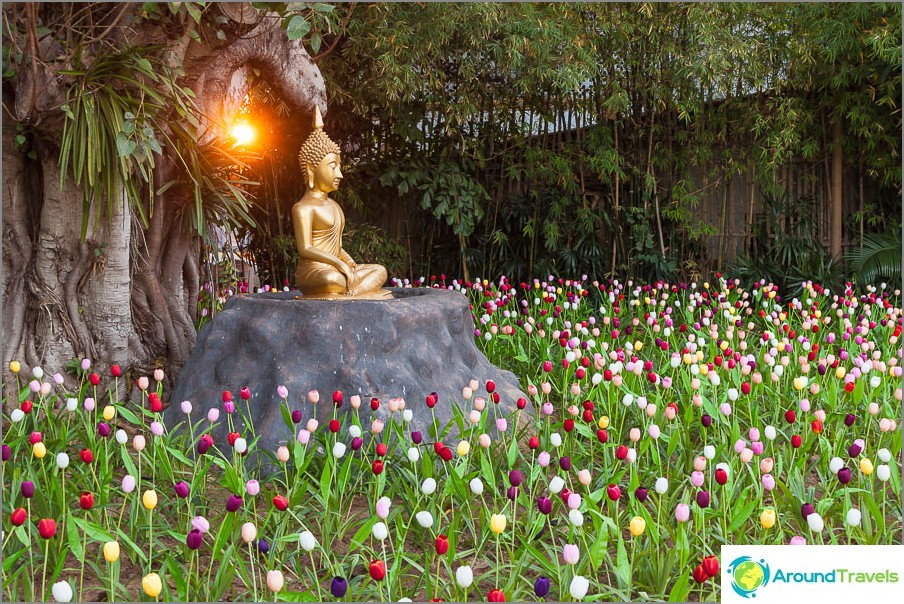 Buddha in the backyard surrounded by artificial tulips 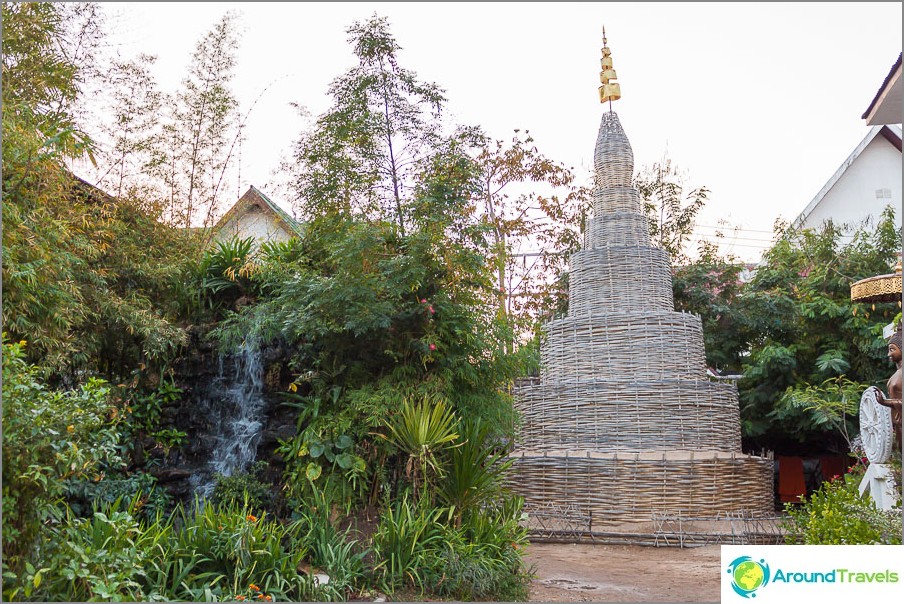 An ordinary big temple. We sat in it for about an hour, it was good. The main building itself is quite typical and similar to all the others, but there are smaller and more beautiful temples. One of them contains the famous statue of Buddha Phra Singh, which means “Buddha in the pose of a lion”. And the high building of the library is also very attractive.

On the territory of the temple Wat Phra Singh is locatedmonastery. Maybe that's why there are so many monks here, everything is straight in the eyes of orange. But maybe only in my arrival was. In the temple, Phra Singh supposedly sits a mummified monk, but after Madame TussaudsI know that it is made of wax. 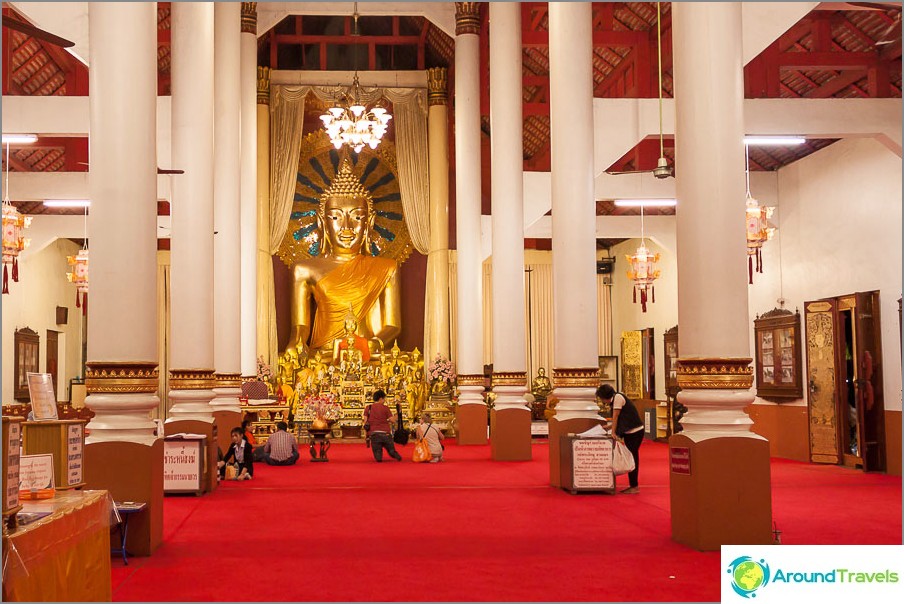 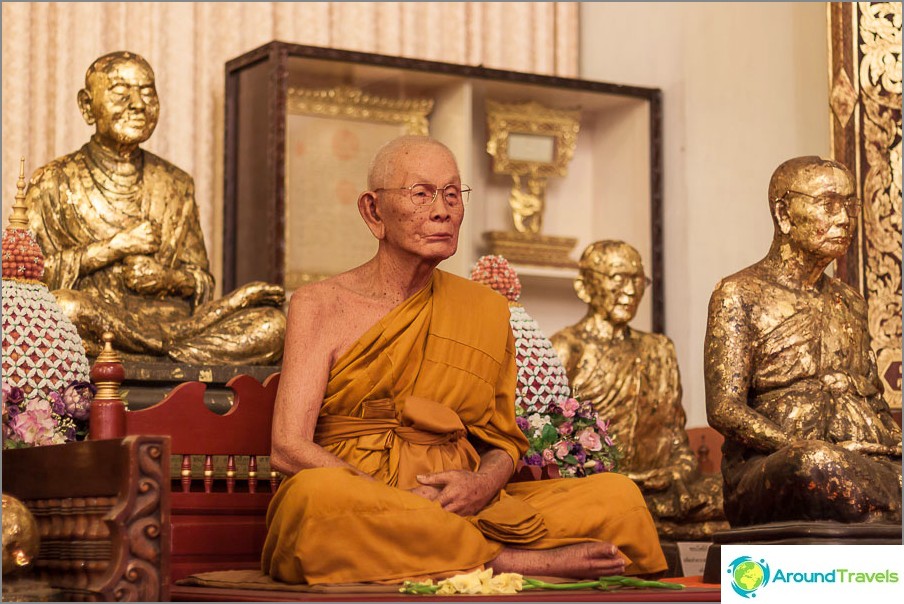 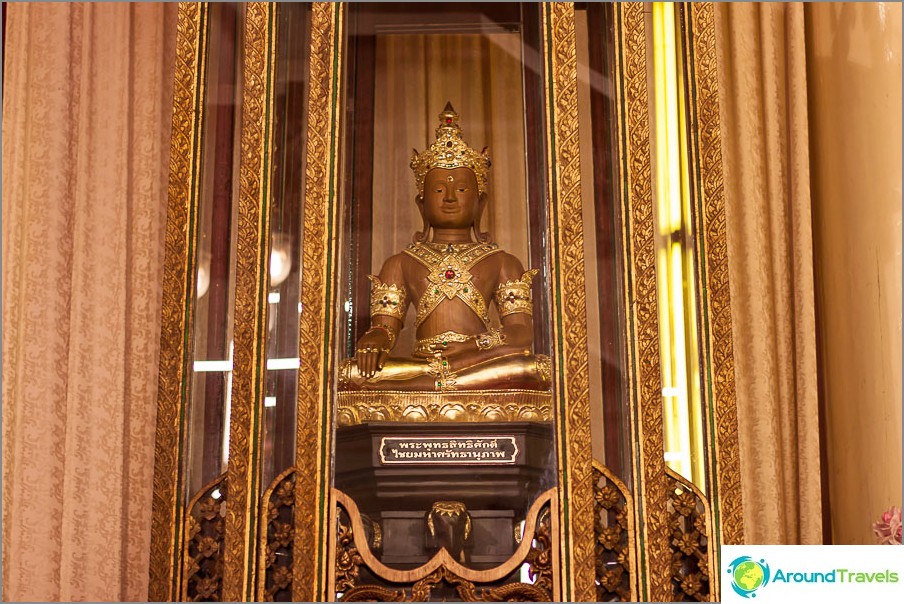 Behind the seven castles hidden statue of Buddha 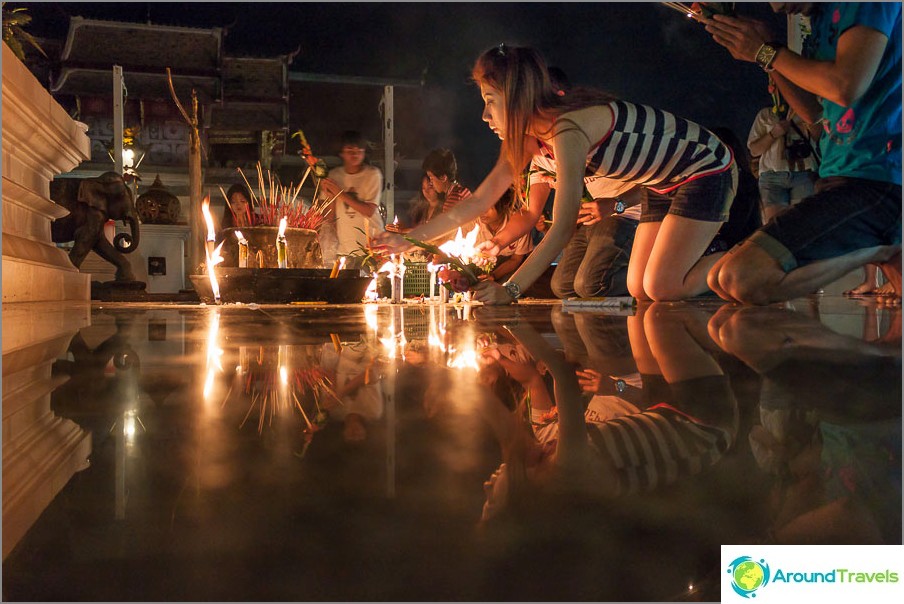 Before entering the temple 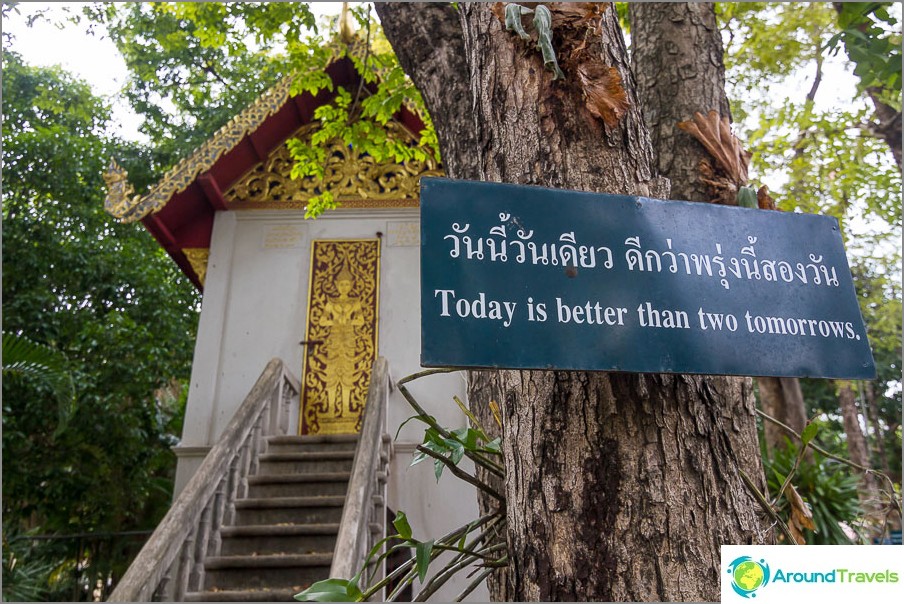 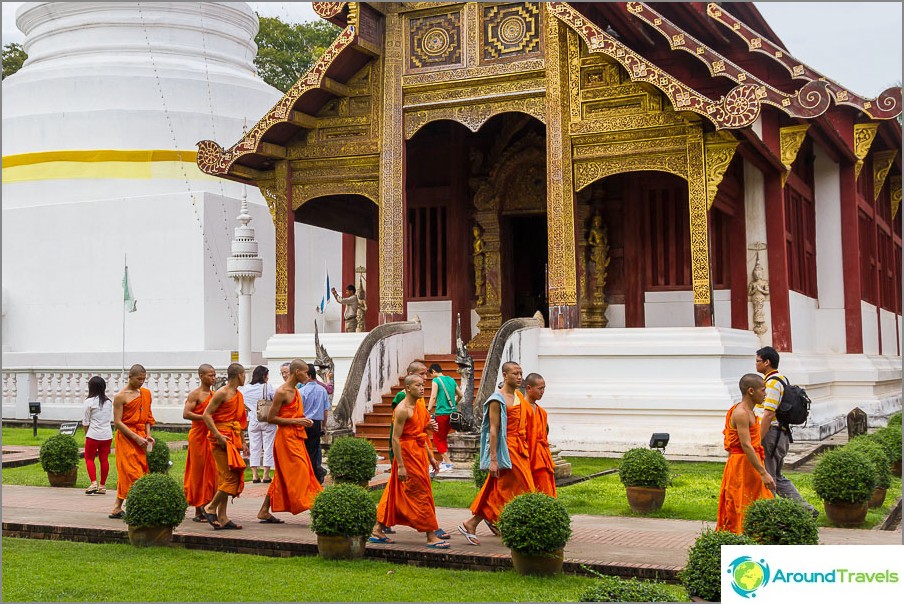 On the territory of Wat Phra Singh many monks 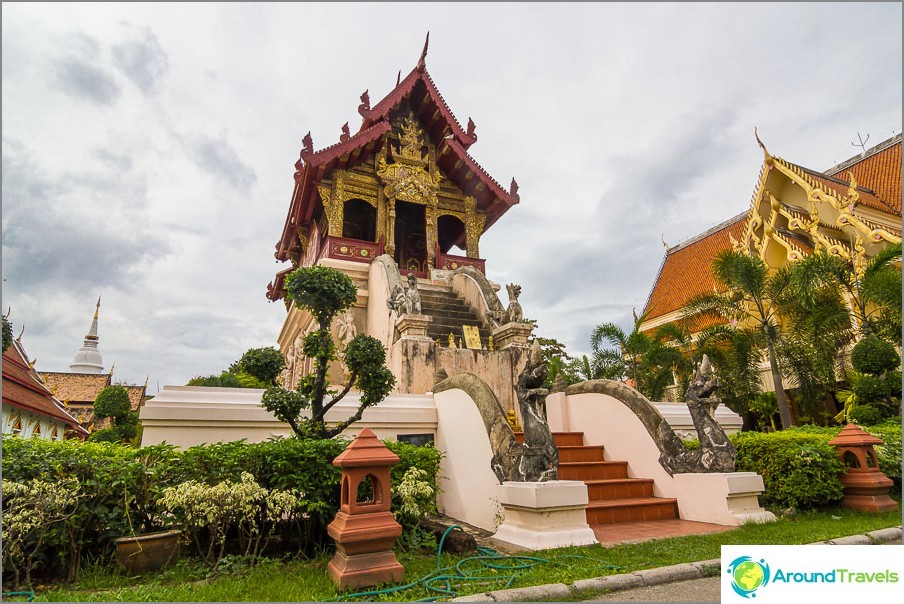 One of the oldest temples of the city, founded in13th century. It seems that even King Meangray himself lived there when Chiang Mai was being built. In the temple, or rather in the small viharna, two ancient Buddha images are kept: the Marble Buddha and the Crystal Buddha. And behind the temple you can see a stupa with elephants. It is not as big as in Chedi Luang, but it looks also tempting (like old). That’s why I don’t like too renovated temples, because they look new and modern. 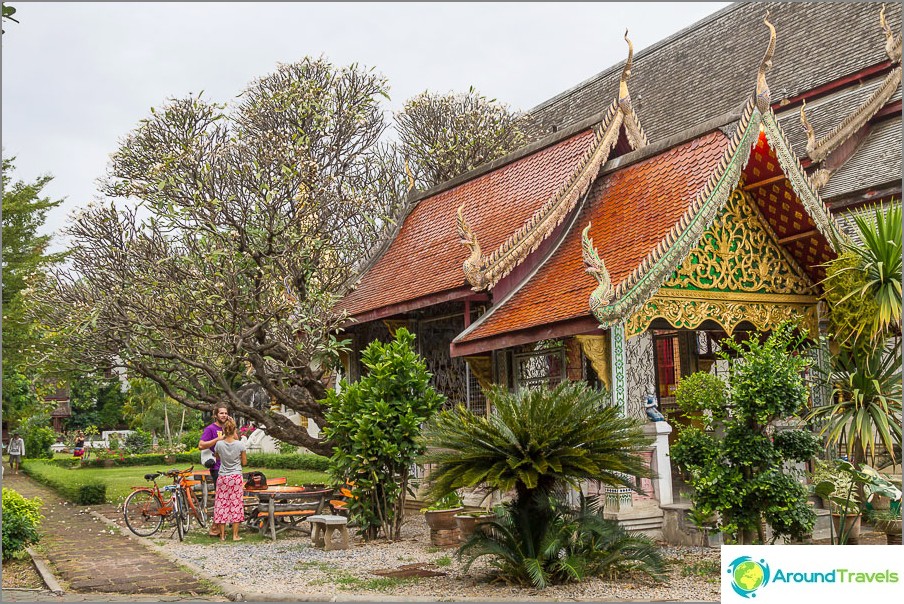 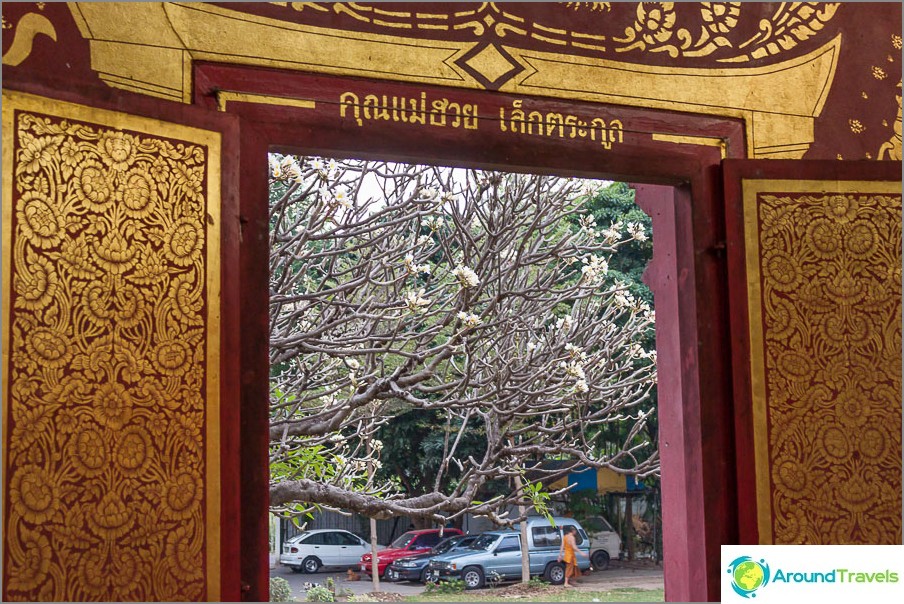 View from the window of Wat Chiang Man 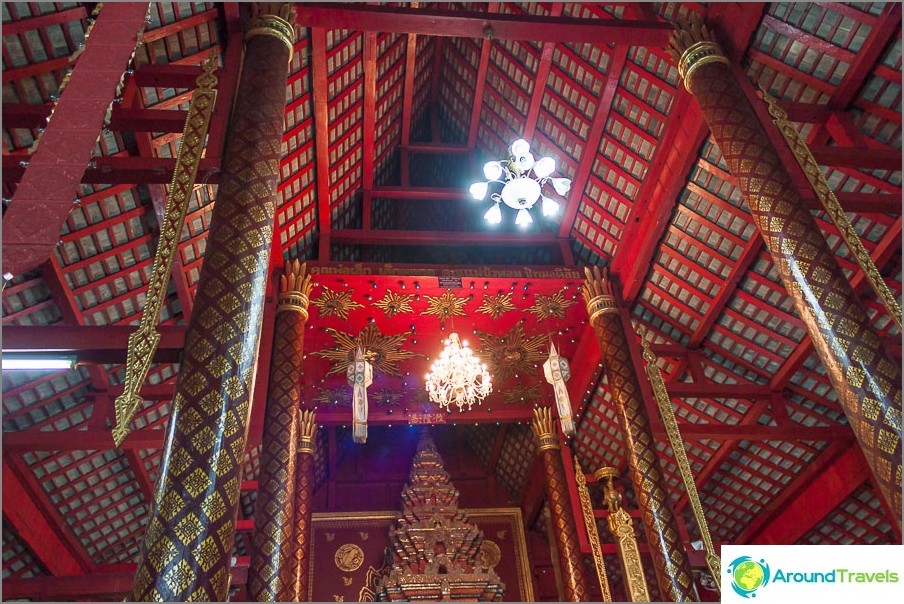 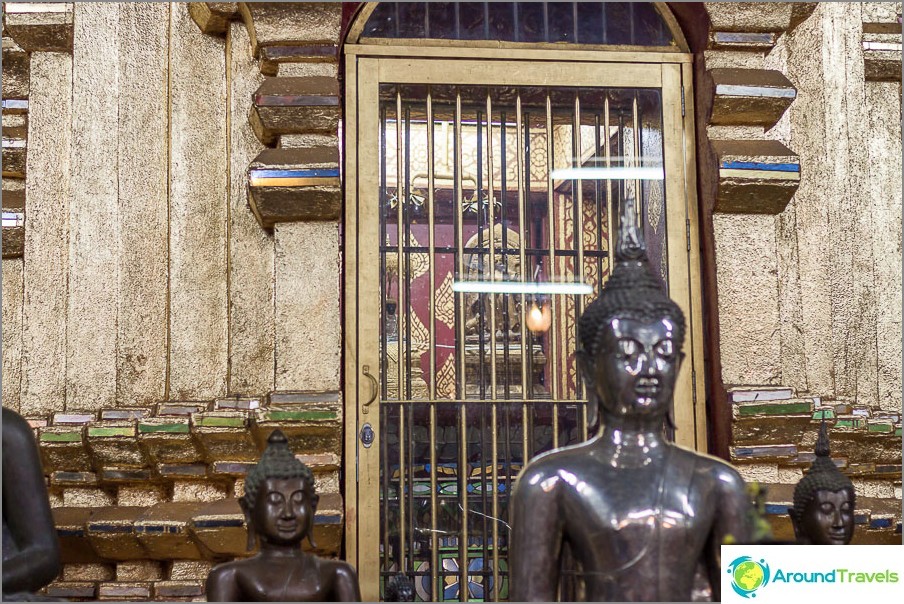 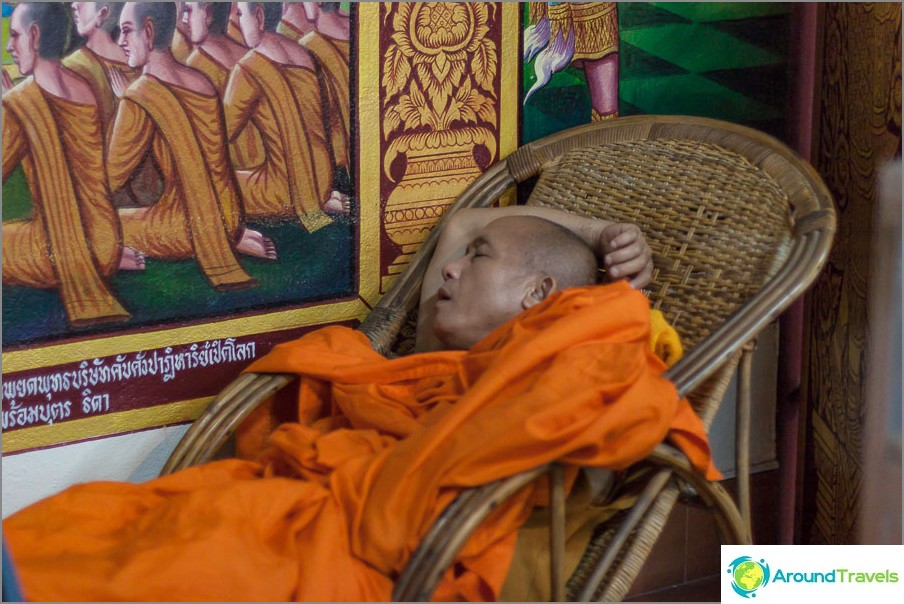 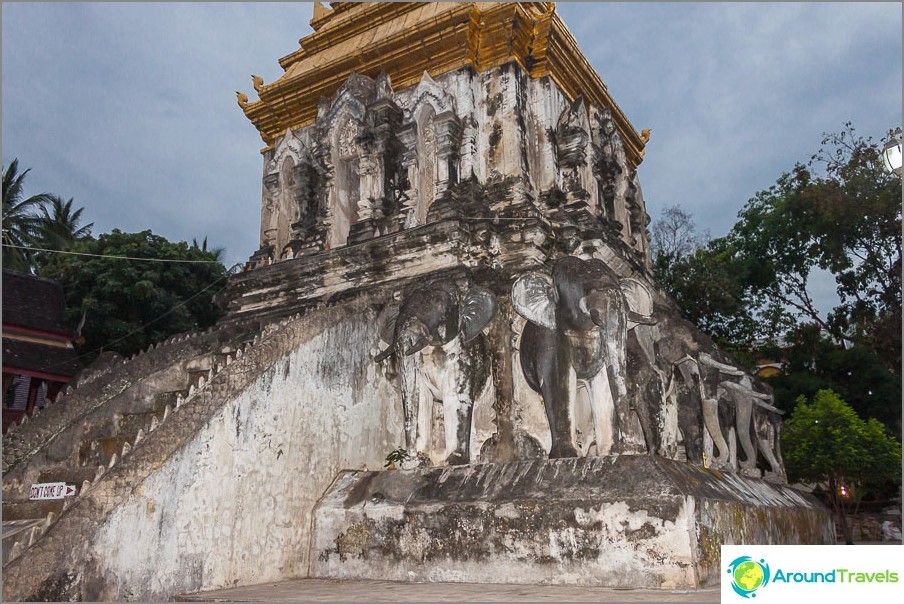 The temple, though not inside the square (on the border of the square), but also put it here, as it passed by many times, returning from the old city. It is small, but quite beautiful. And in Loy Krathong here little monks (children) frolicked, launching pettardas and sky lanterns. 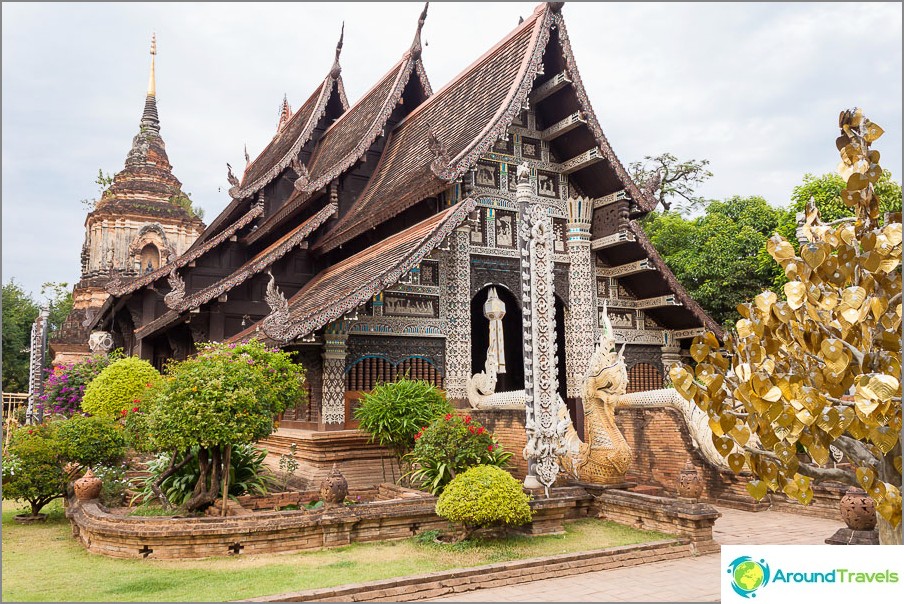 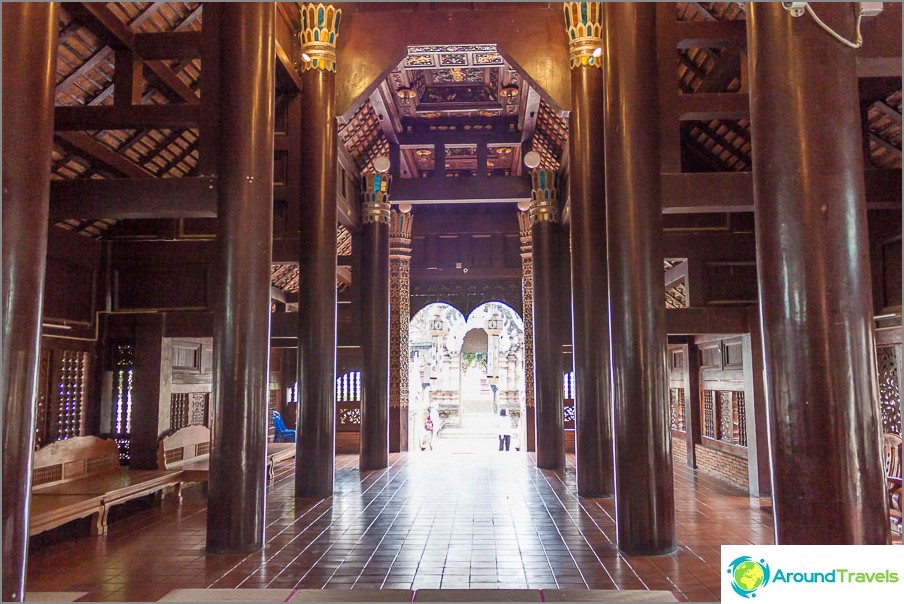 Inside the tree and emptiness 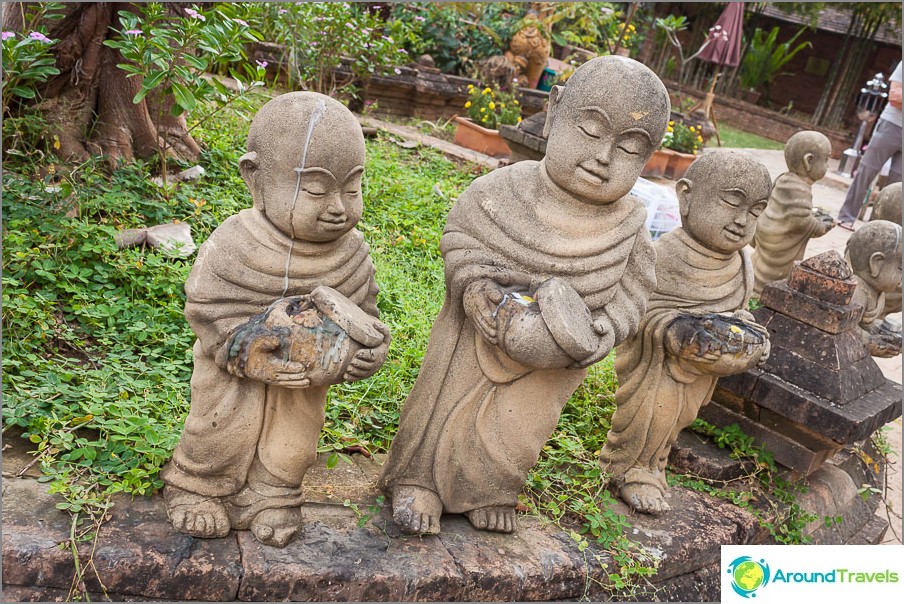 Another of the interesting temples recommend to see Tunnel Temple Wat Umong and temple on the mountain Wat Doi Suthep overlooking the city.