Officially, this place is called Park ThreeKingdoms or Three Kingdoms Park - Three Kingdoms Park or The Romance of Three Kingdoms Park Pattaya. This is a little known among tourists, but a beautiful and well-kept theme park with buildings and Chinese-style décor. Something in between a European regular park and a traditional Chinese garden with pagodas, dragons and lions.

The park is created by the family of a Thai businessman withChinese roots, which was very keen on the Chinese classic novel of the XIV century. "Three Kingdoms". The novel tells of an era when the empire that existed in China broke up into three separate kingdoms that were at war with and fought among themselves for power over all lands. These events took place in the II-III centuries AD. and paintings and murals inside the pagodas and 56 tiled illustrations of the novel on the wall around the park tell about them.

The main buildings of the park are 3 pagodas, almostidentical in appearance. When I was there, the central pagoda, the largest and highest, was closed for reconstruction, and the other two could be entered. Inside the central pagoda there should be a sculpture of the creator of the park on the first floor, on the second - paintings and murals based on the Three Kingdoms novel, and on the third there is a balcony. If the entrance to the main pagoda is opened, from the balcony it will be possible to look at the park from a height.

In addition to pagodas, paintings, figures of deities and fountainsthroughout the park, you can find different items in the Chinese style: vases inside glass cases, statues of warriors and dragons' bas-reliefs, wooden plates with hieroglyphs, bells. If you look at the details, you can find a lot of interesting things. 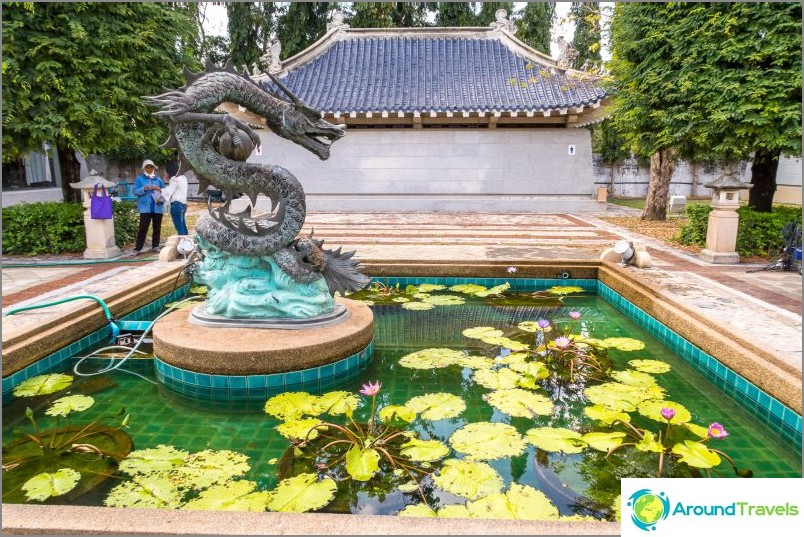 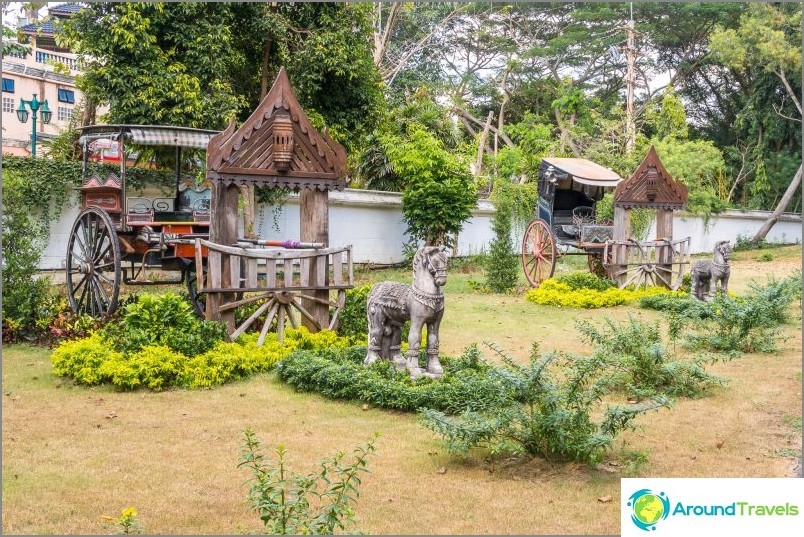 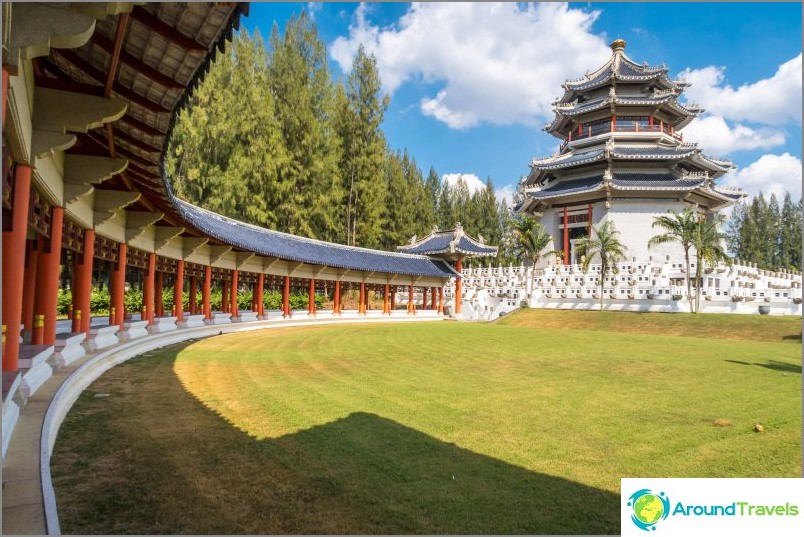 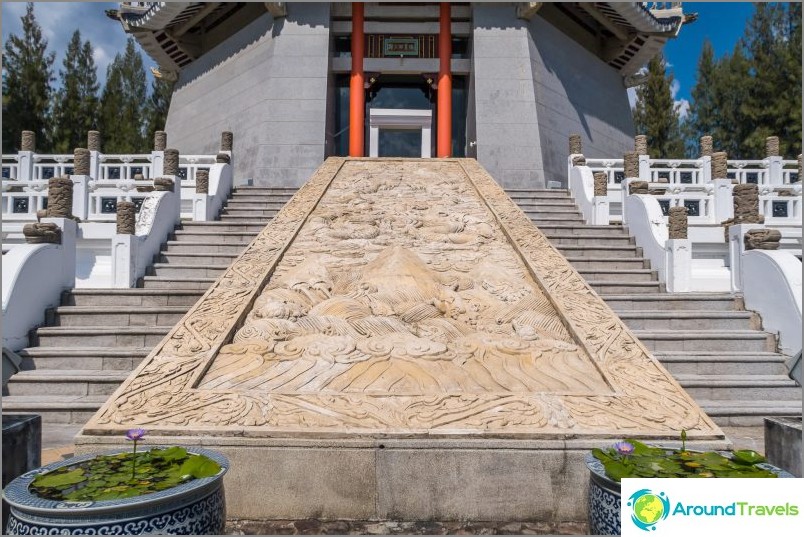 Stairs to the main pagoda 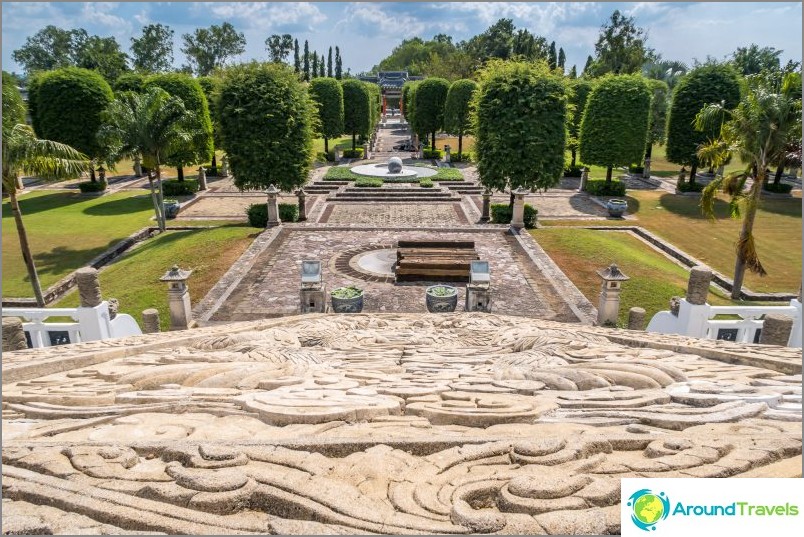 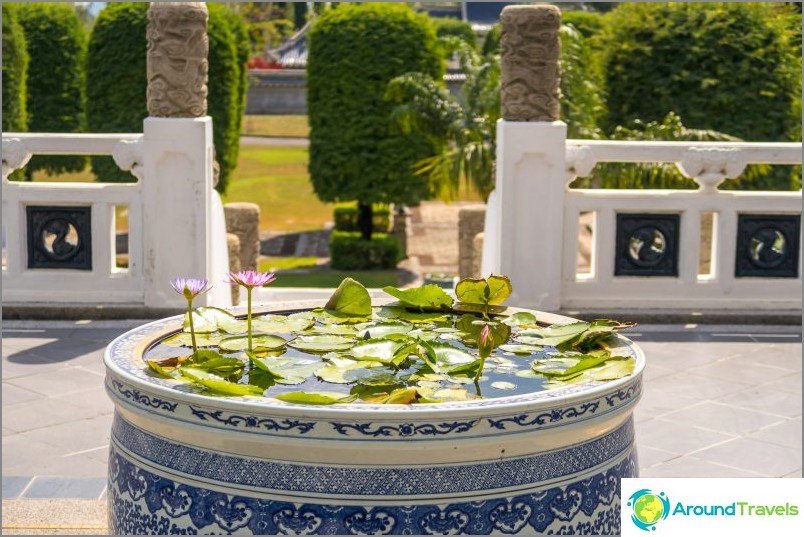 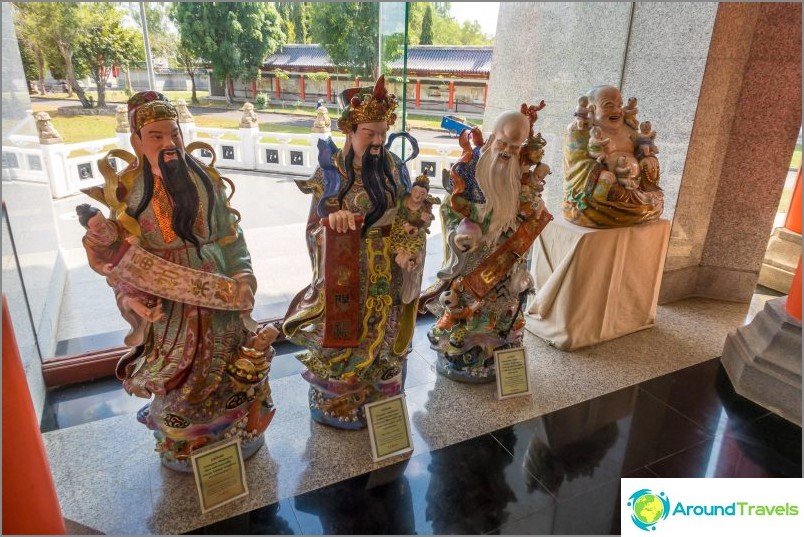 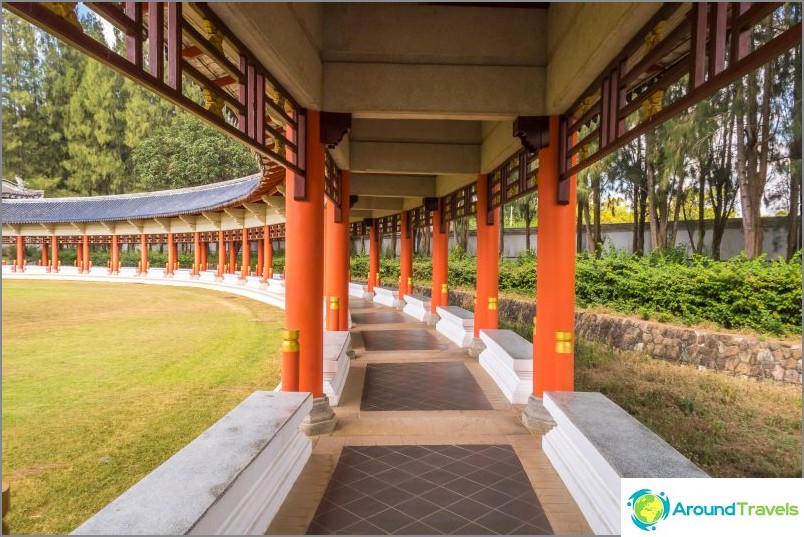 Covered gallery connecting the pagodas with each other 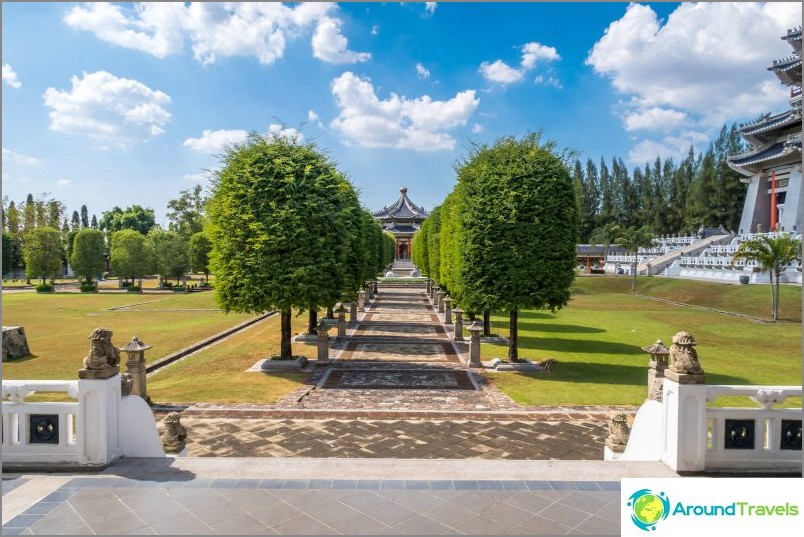 Trees are trimmed as in a European park

The park is somewhat similar to other themed privateParks in the vicinity of Pattaya, where there is an interesting architecture, well-groomed paths, fountains, lawns and a lot of backgrounds for a photo. Such a pleasant and uncrowded place for a romantic walk and a photo shoot. Something like Silver Lake, Garden of Million-Year Stones, Love Art Park.

The place is not a place, but if everyone has already seenPattaya and I want to take a walk somewhere in solitude and in nature, then a good option. Especially for lovers of Chinese history and culture. Nearby there is another place where you can spend time - Siam Country Club. Entry is free. And next door is a resort Horseshoe pointwhere, judging by the name, you can ride horses.

I never met anyone in the park. Not a single tourist, no farang, no Thai. The territory is small, you can bypass everything in 20-30 minutes, if slowly, then in an hour. 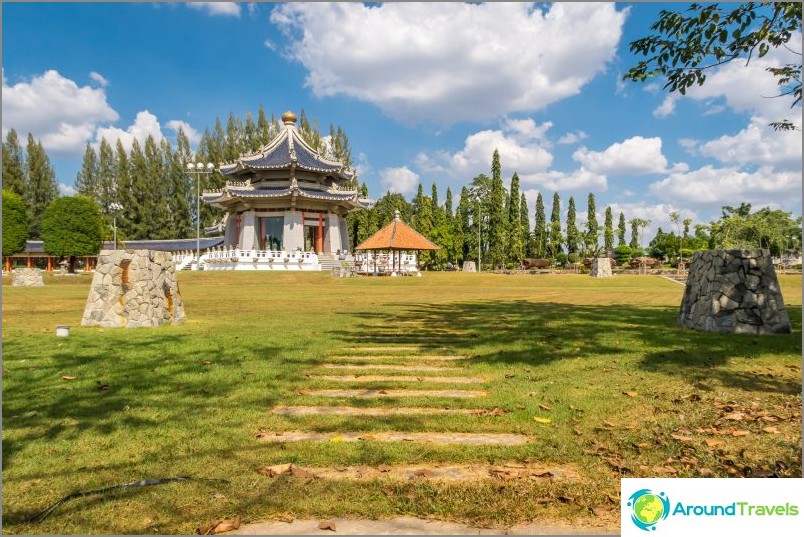 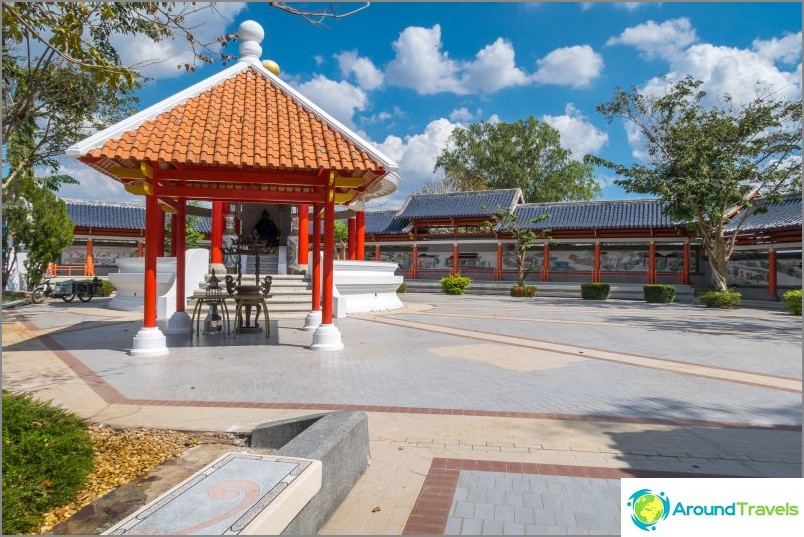 Sculpture of Chinese deities under the roof and the wall along the park, with paintings on the tile 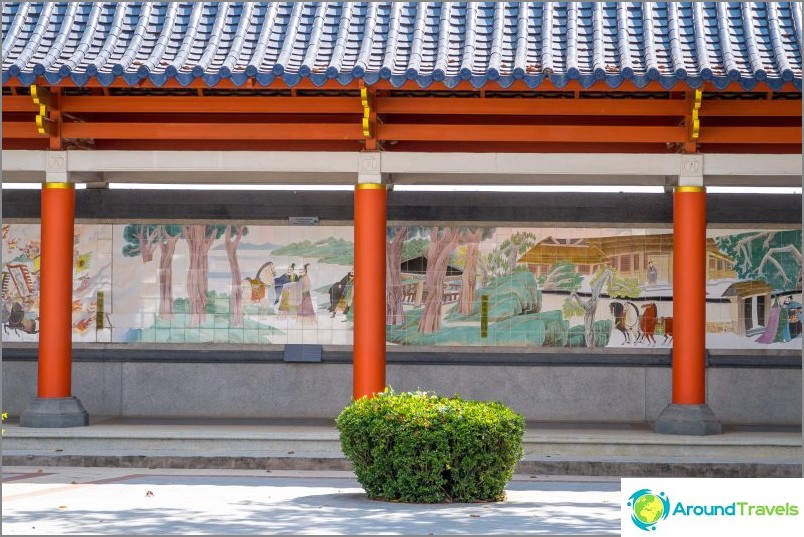 Tiles with illustrations for the Three Kingdoms novel 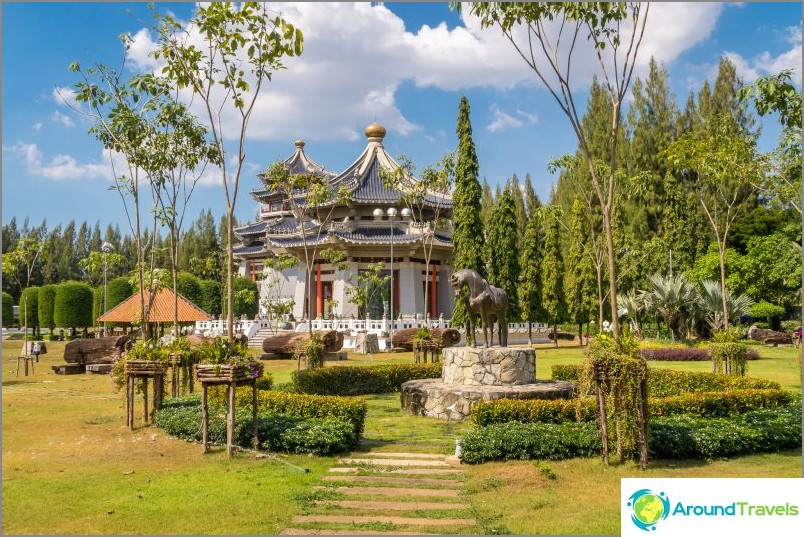 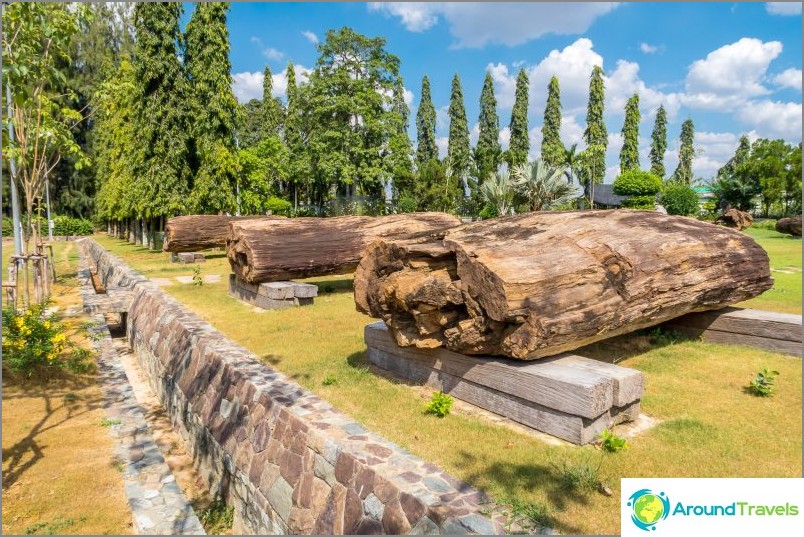 The trunks of million-year-old petrified trees 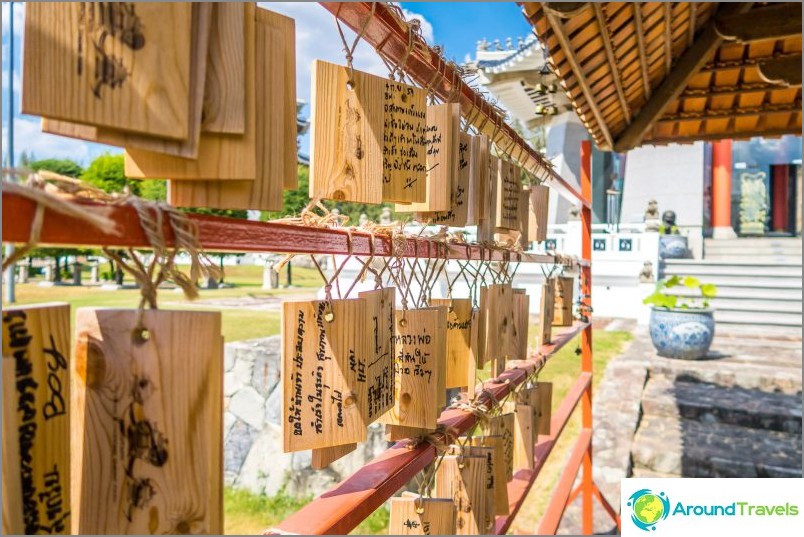 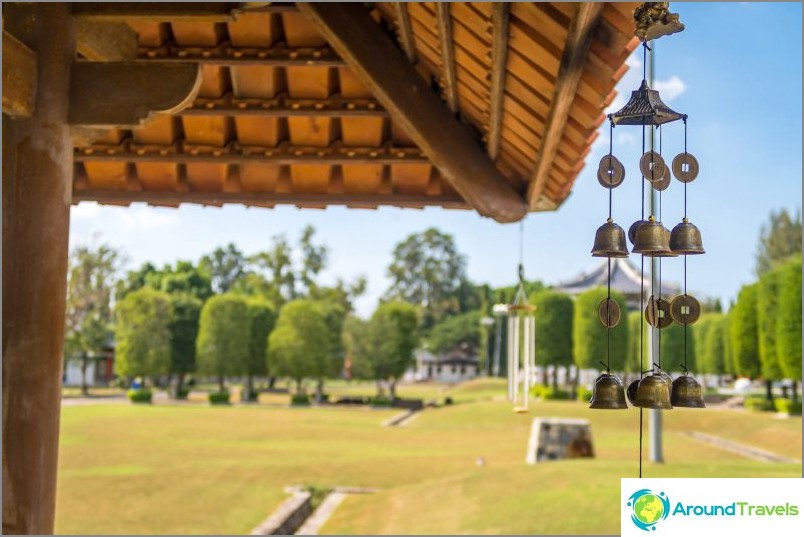 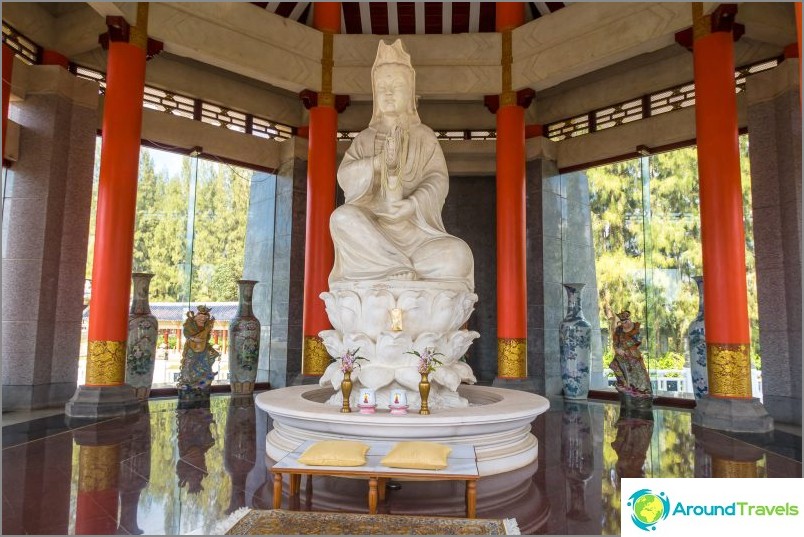 Sculpture of the Goddess Guan Ying 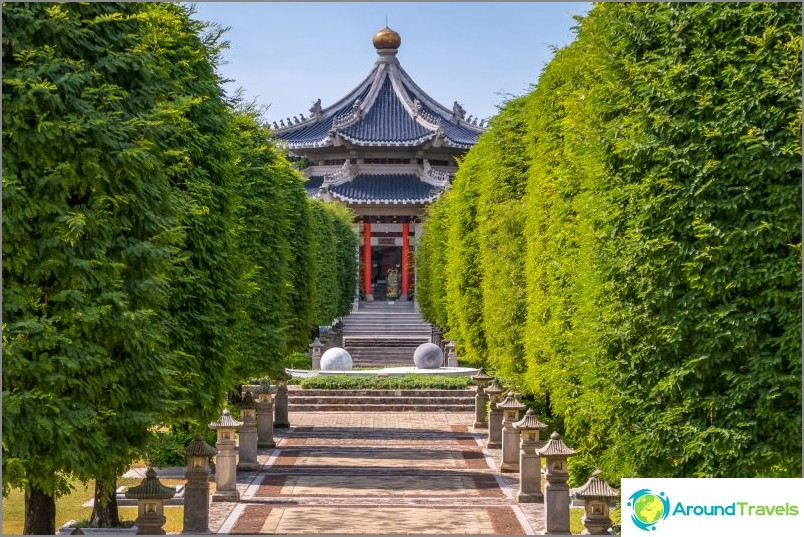 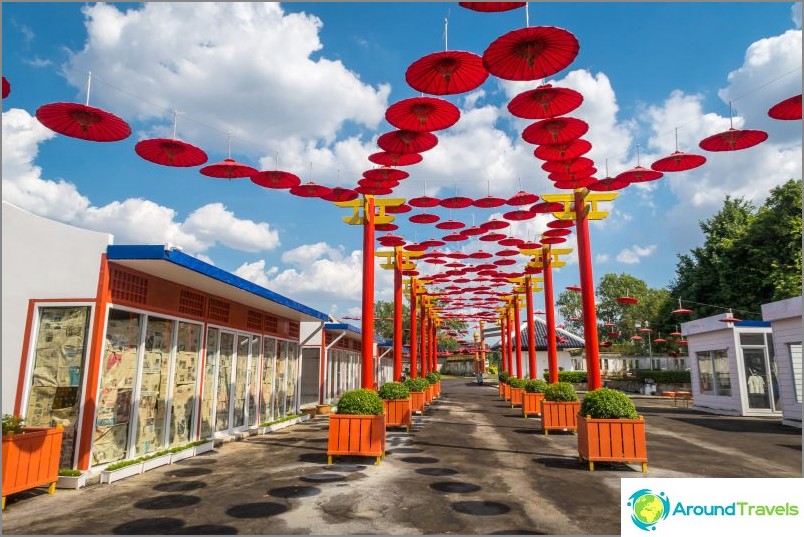 Still not working souvenir shops and a place for cafes 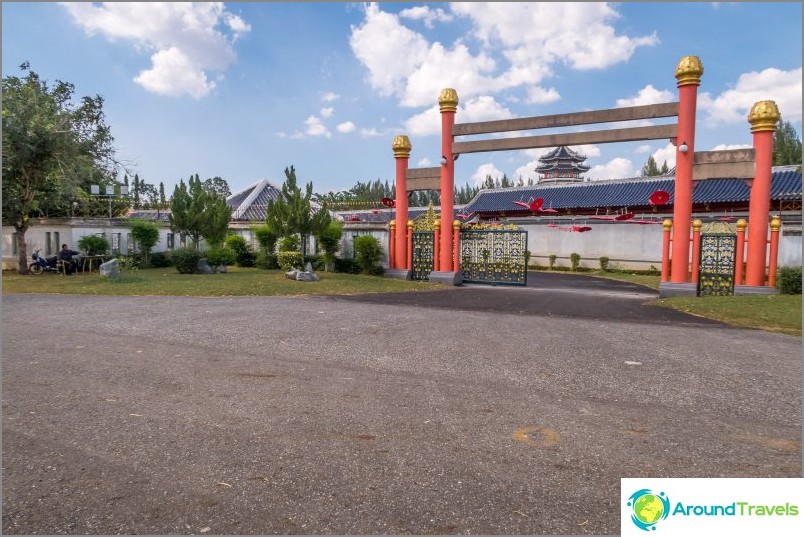 Entrance to the park. There is no cash desk as such

With me for a ticket to the park took 80 baht, but they saidthat after the reconstruction the cost will be 500 baht! This is a lot for such a park, it is better to go to Nong Nooch for the same money. Judging by what I was told at the checkout, not very much there will be added after the completion of the work. Perhaps there will be Chinese folk costumes. There will definitely be horses. If the trip for them will be included in the ticket price, then more or less the price is justified.

Located about 10 km from the Sukhumvit road. Next to the Siam Country Club Golf Club and adjacent to the hotel Horseshoe Point Resort & Country Club.

Public transport in the area does not go, so either by private transport or by taxi.

Park of the Three Kingdoms

Park of the Three Kingdoms
Beautiful place for walking and photo sessions. Not a popular tourist destination, but it will probably become. 3 pagodas, galleries, figures and all in Chinese style.
Read more. 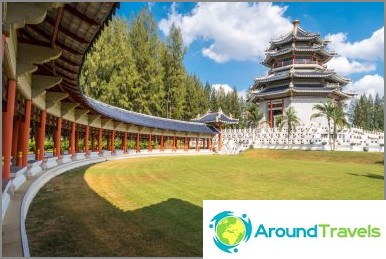 Beautiful place for walking and photo sessions. Not a popular tourist destination, but it will probably become. 3 pagodas, galleries, figures and everything in the Chinese style. In more detail.

Inverted house in Pattaya - an attraction for ...